On Sunday we hauled the ponies down to a little hunter/jumper schooling show nearby. My husband wanted to do the 2’9″-3′ division for BN stadium practice and Levi still needs practice going to places and jumping things he hasn’t seen before. Luckily, the higher divisions were at the end of the day so we got to sleep in and got to the show around noon.

I wasn’t sure what division I wanted to do. I had thought about doing the 2’9″-3′ division (division 4) since I knew this show was soft on heights. However, there were only 2 people including my husband in his division so I decided not to do that one. The other girl entered competes at Novice and Training level and I figured with just the two of them, they’d ask for the jumps to be raised up a bit and I didn’t want to be part of that. I did ask if there were any classes with 5 people entered that I could enter because I needed a 6th place ribbon for a craft I’m working on. When I told the woman running the show that, she laughed and said I could have whatever colored ribbon I wanted. Cool. I chose the 2’3″-2’6″ division (division 3) which had a grand total of just me in it.

While the higher divisions had few entries, the lower levels were jam packed so we were there for a bit waiting for our divisions. I started out by practicing braiding Levi’s mane. Braiding wasn’t required for the show, but I wanted to practice while I had the time. I got about half the mane done before I pulled them back out because they looked terrible. I definitely need to practice braiding more. Then I wandered off to watch the crossrails divisions with my husband.There were a whole host of naughty ponies to giggle at so that was fun.

Then it was time to get tacked up and dressed. Levi was great in the warm up. He was chipping in really close, but going over the jumps without any hesitation. The announcer called that they were finishing the division before mine so we went over to the arena for my classes and confusion set in. Between the judge and the announcer and the show manager, everyone had a different idea of who was doing what. At first they thought my husband and I were both doing division 3. Nope. He wants to do 4. Ok. Then they thought I was doing 4. Still no. Then they said they were going to combine the divisions, but my husband didn’t want to do the tiny jumps that were set up for me. Finally the announcer called that they had finished division 3 and would be setting the jumps for 4 and I was like, ummm… I finally rode into the ring, walked up to the judge’s booth and explained that I had not gone yet and could I just go now please?

The show manager asked if I was okay with the height of the jumps and I thought about saying they were too small for the 2’3″-2’6″ division since the highest jump was 2’3″ and most were 2′, but figured that would just result in more confusion and delay so I said yes.

Our first round was Hunter Warm Up. Levi started off well, but then lost his mind about sun shining on the jumps along the outside line.

“The Light is Lava”

We circled while I switched my crop to the inside and came back around. This time he didn’t refuse, but he did make sure not to touch it: 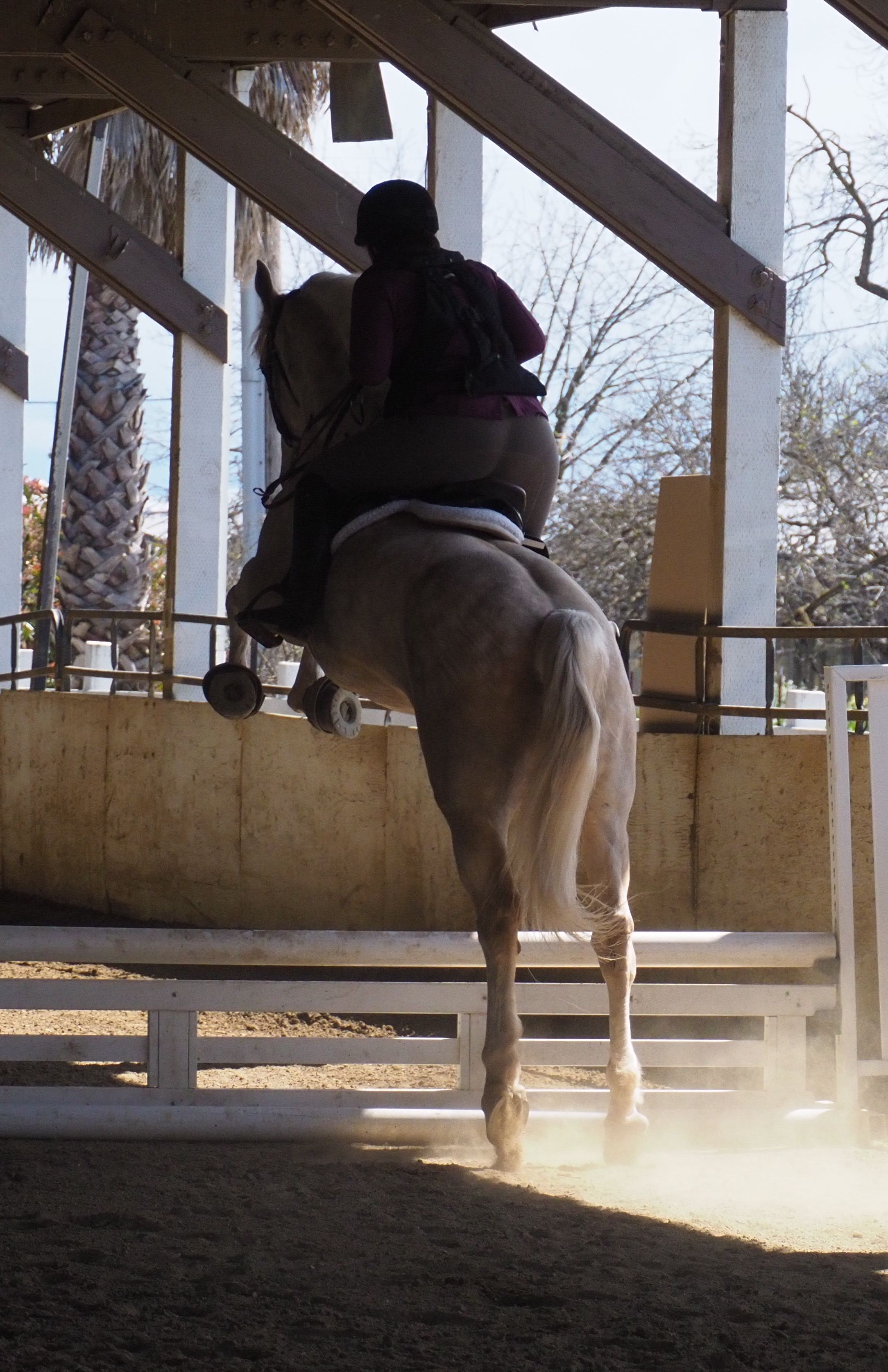 I could actually hear a bunch of the spectators gasp when he did that. It was a rather dramatic reaction to a little 2′ jump. But he wasn’t done freaking out about the damned sun line: 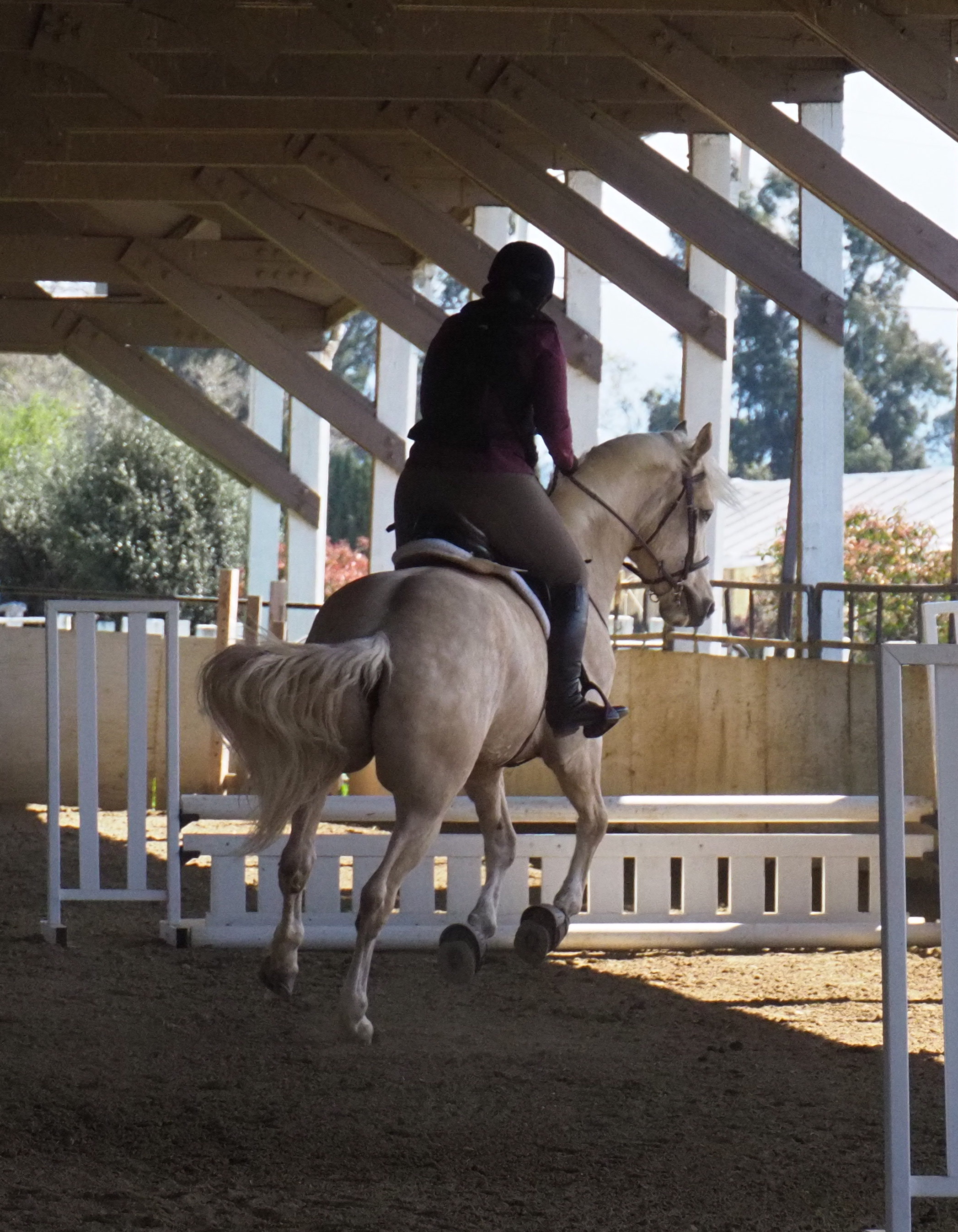 Don’t go into the light…

There was much wiggling, then much refusing, then an unacceptable amount of lightness in the front end before I circled and forced his ass over it. 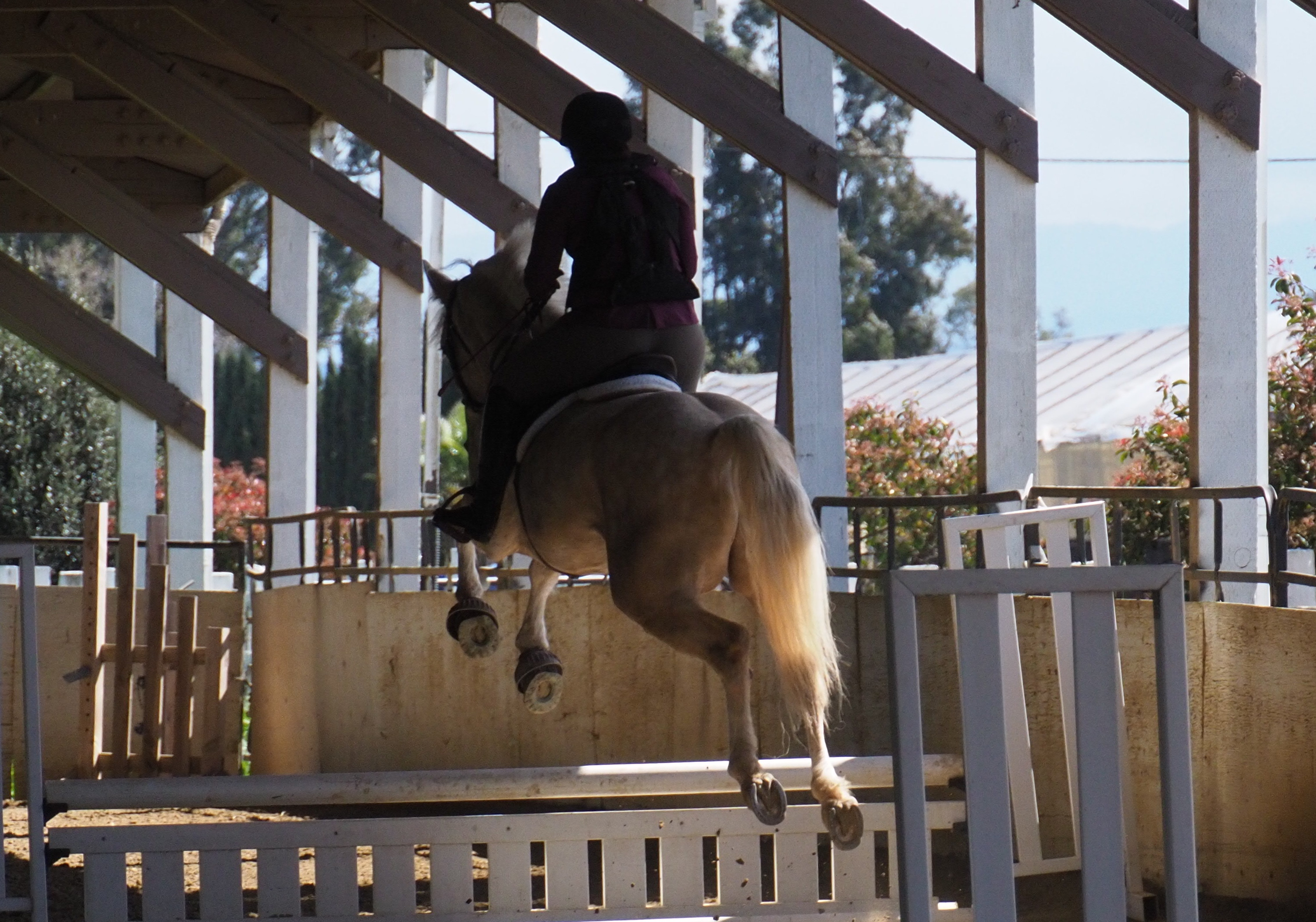 The whole round was a disaster. Everything was wiggle, wiggle, wiggle, awkward contortion. We managed 3 refusals in one round. While it might have been just a warm up round at a schooling H/J show in a division I was guaranteed to win, it’s a good example of why I don’t trust him enough to sign up for another event. At an event, we won’t have a warm up round. I don’t want to pay a ton of money to play the hot mess express at a real event.

The next round was better in that we had zero refusals, but it wasn’t pretty. Like wtf are these legs doing? 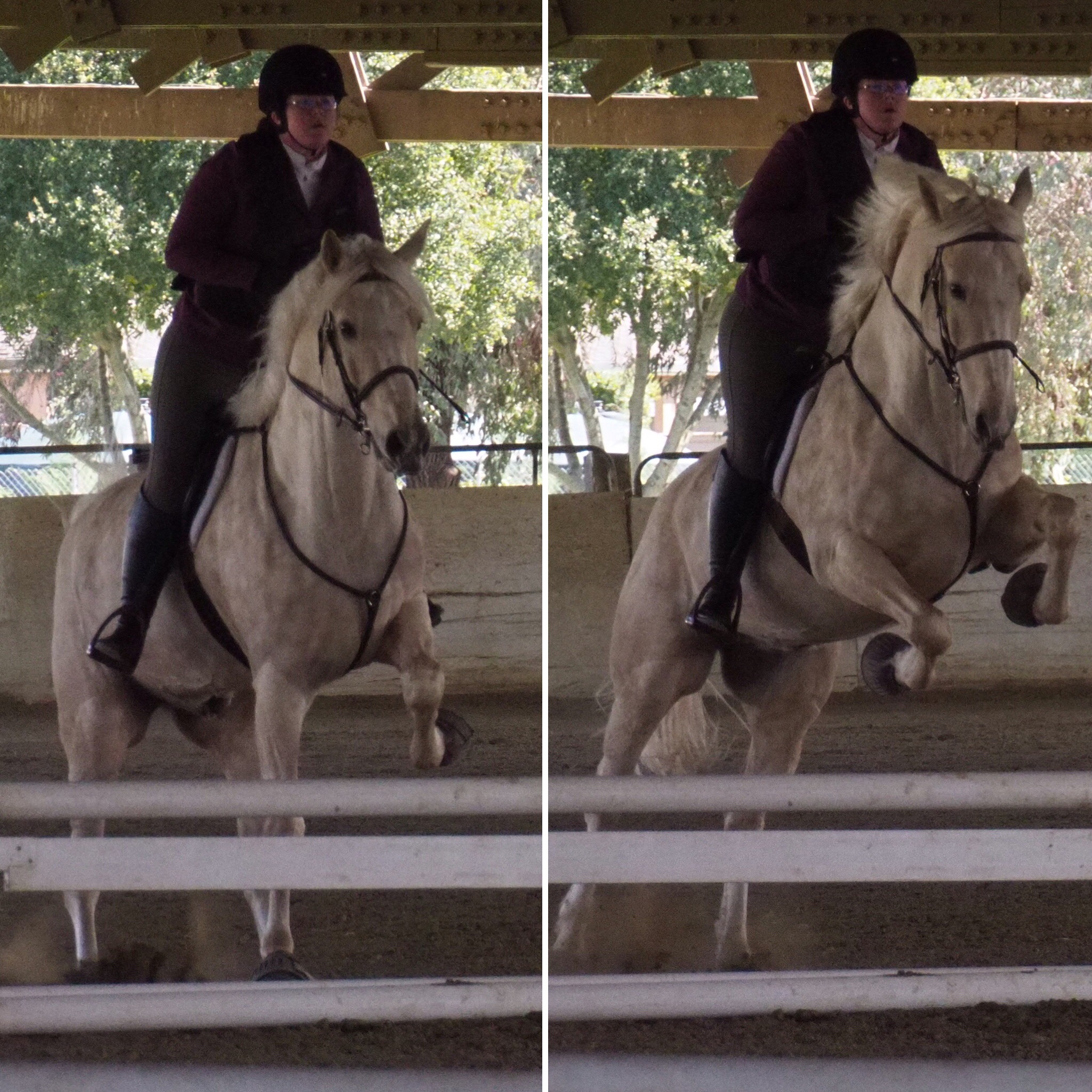 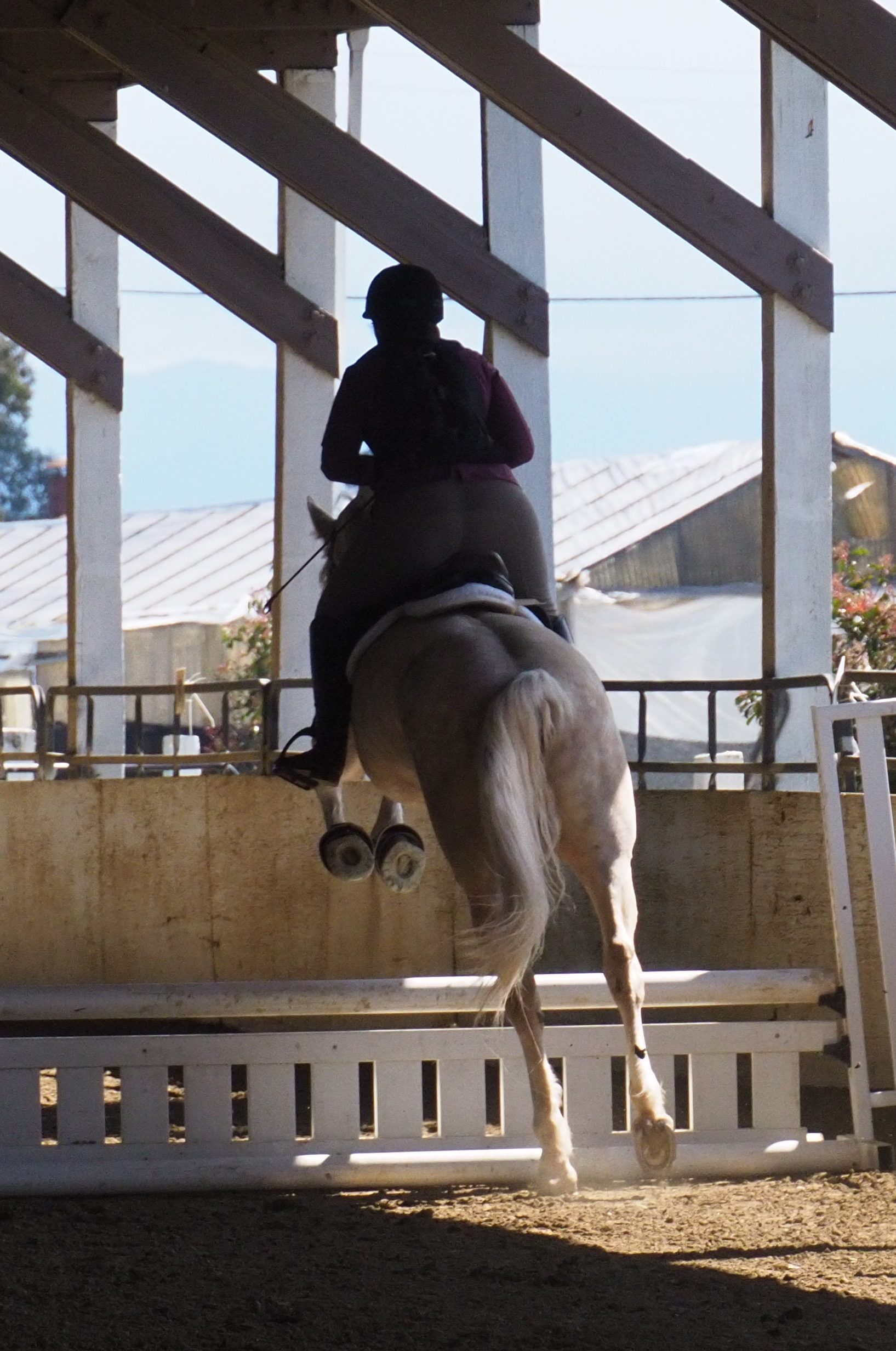 Then it was time for our Equitation round. Since I was the only one competing in division 3, I had to do all 4 courses in a row and I had only memorized the first two. I had a rough idea of the Eq course so I stopped by the gate and had my husband confirm the course for me and then it was off to jump more things. For the Eq course, we had to do the line of death in the opposite direction and Levi wasn’t 100% sure that was safe: 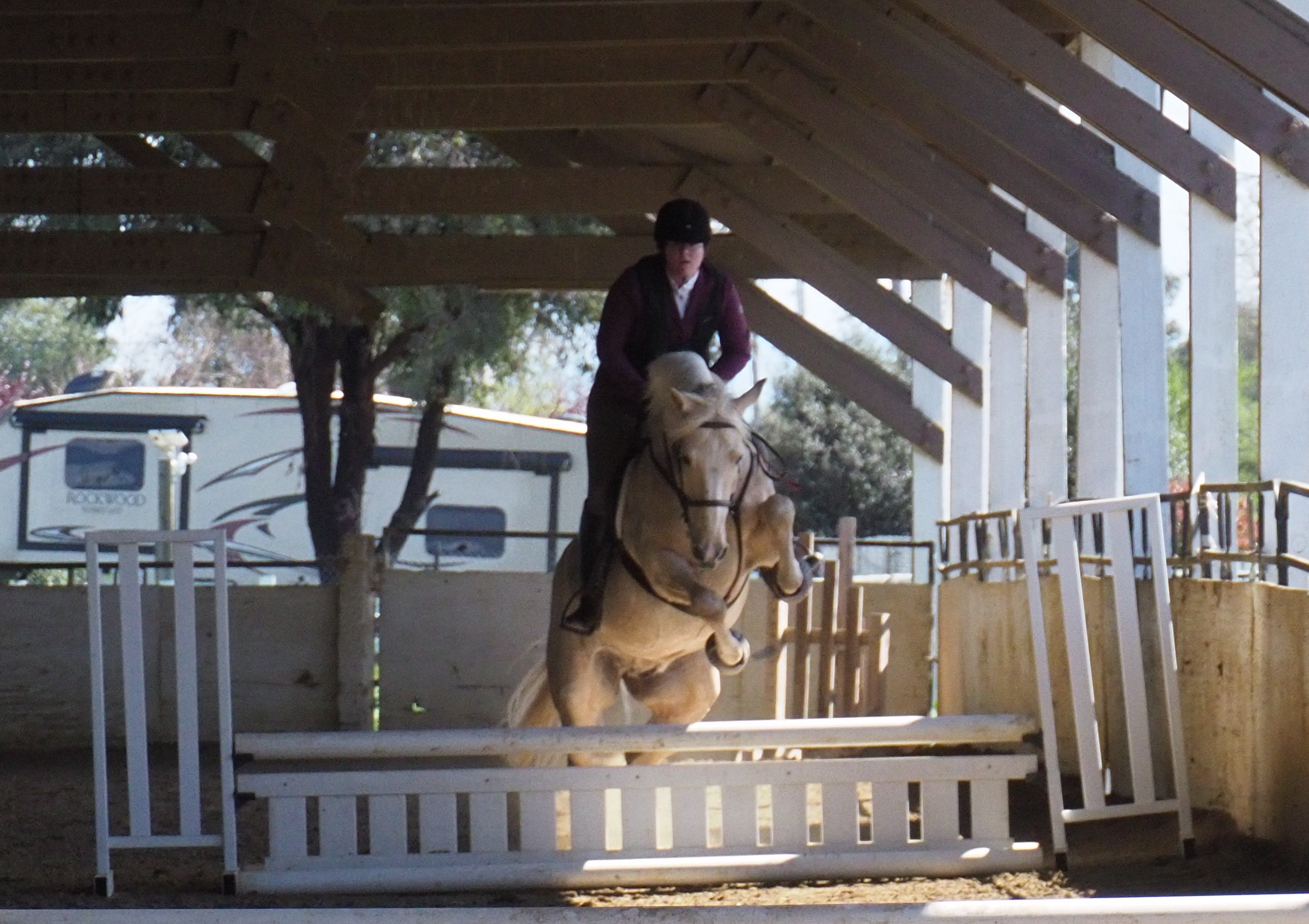 Keepin’ his eye on it 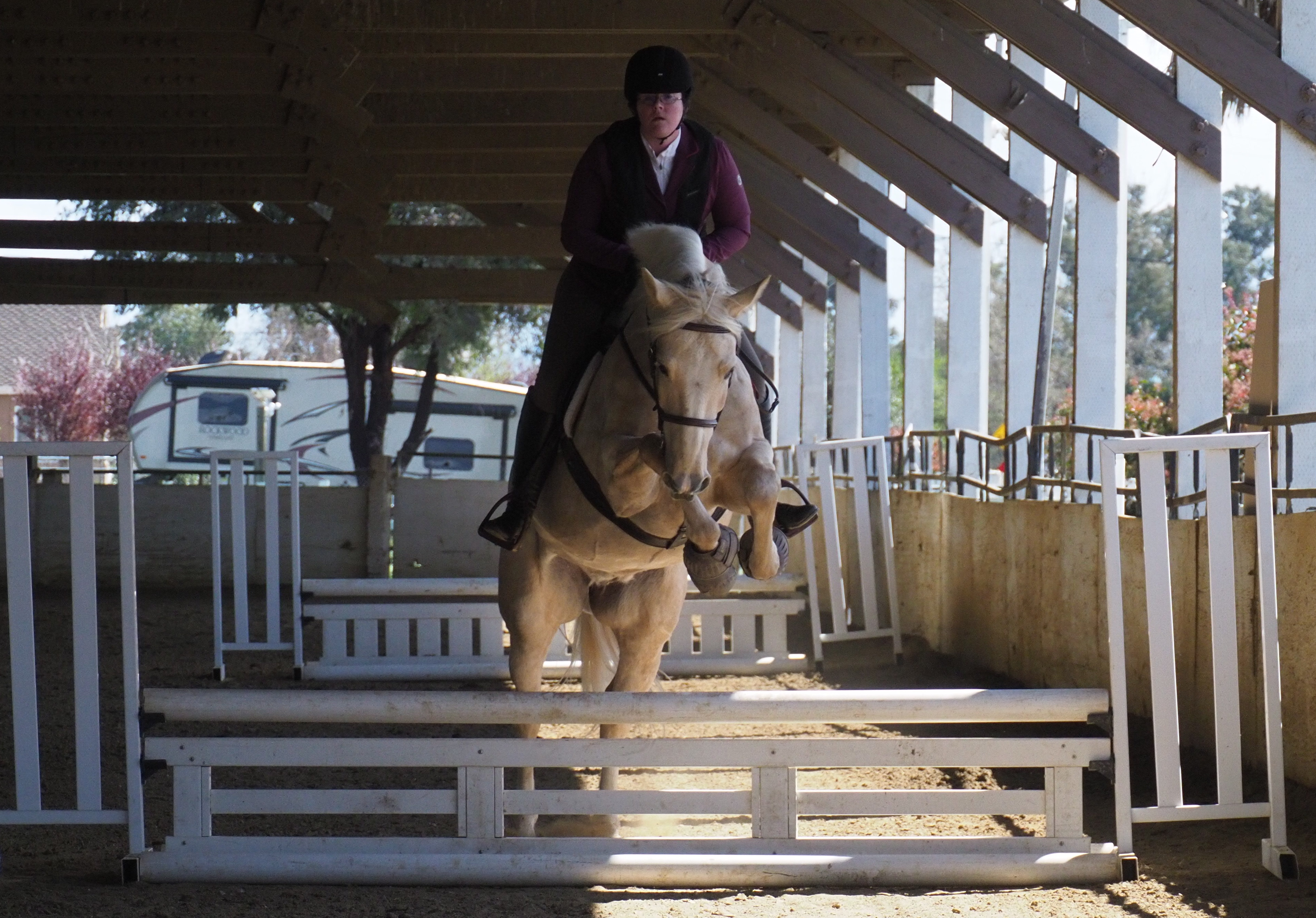 I had completely avoided memorizing the jumper course because it was so different than the hunter and Eq classes that I didn’t want it messing me up. I went back to the gate and had my husband tell me the course, then we were back to the jumping of things.

At this point Levi was a bit tired from 4 courses in a row and was being a bit pokey. He also wasn’t listening to me at all and proceeded to take out an entire jump. 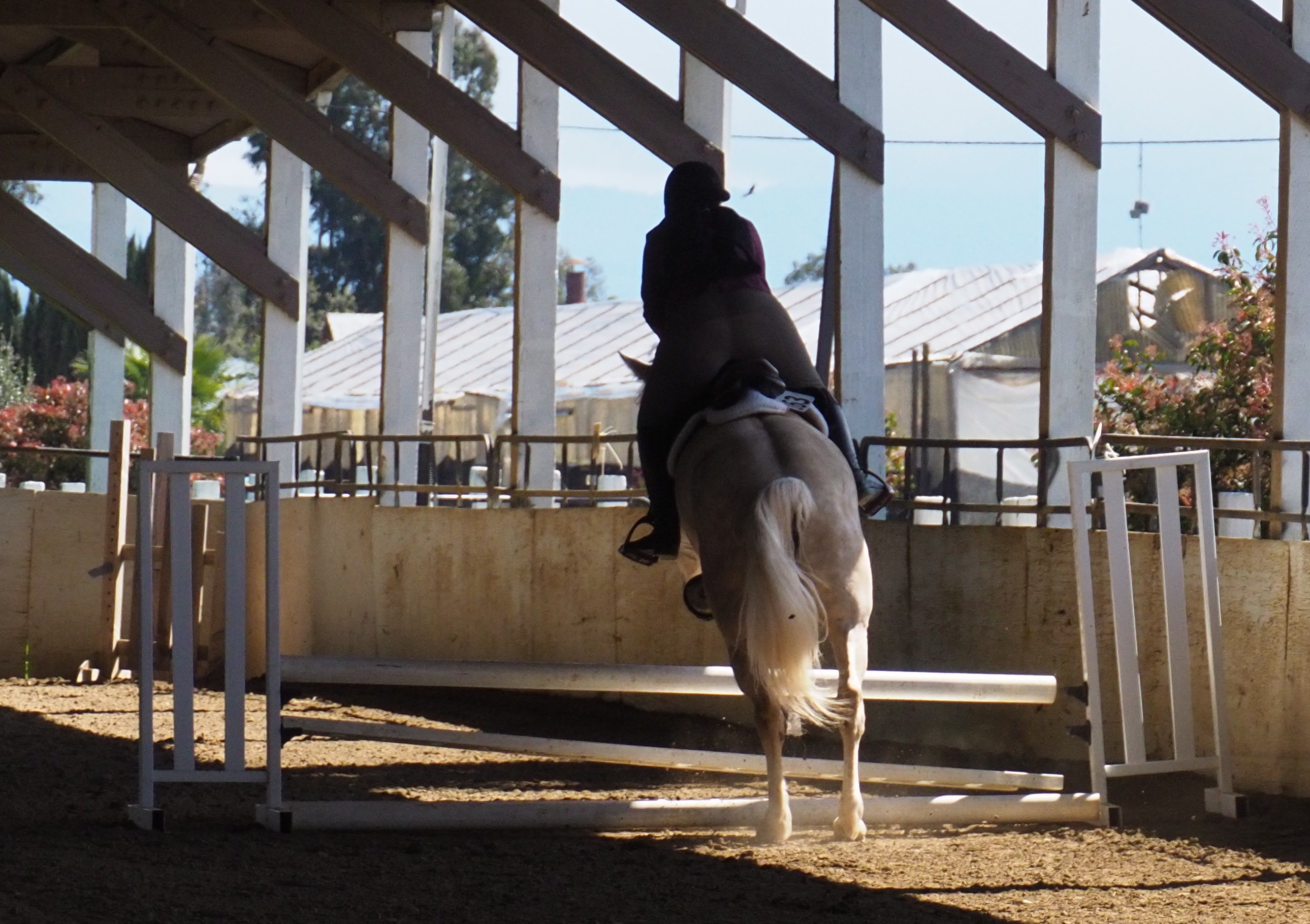 He landed mad at touching it and threw a little bucking tantrum and I was like, no that’s not what we’re doing right now. The next jump was much nicer: 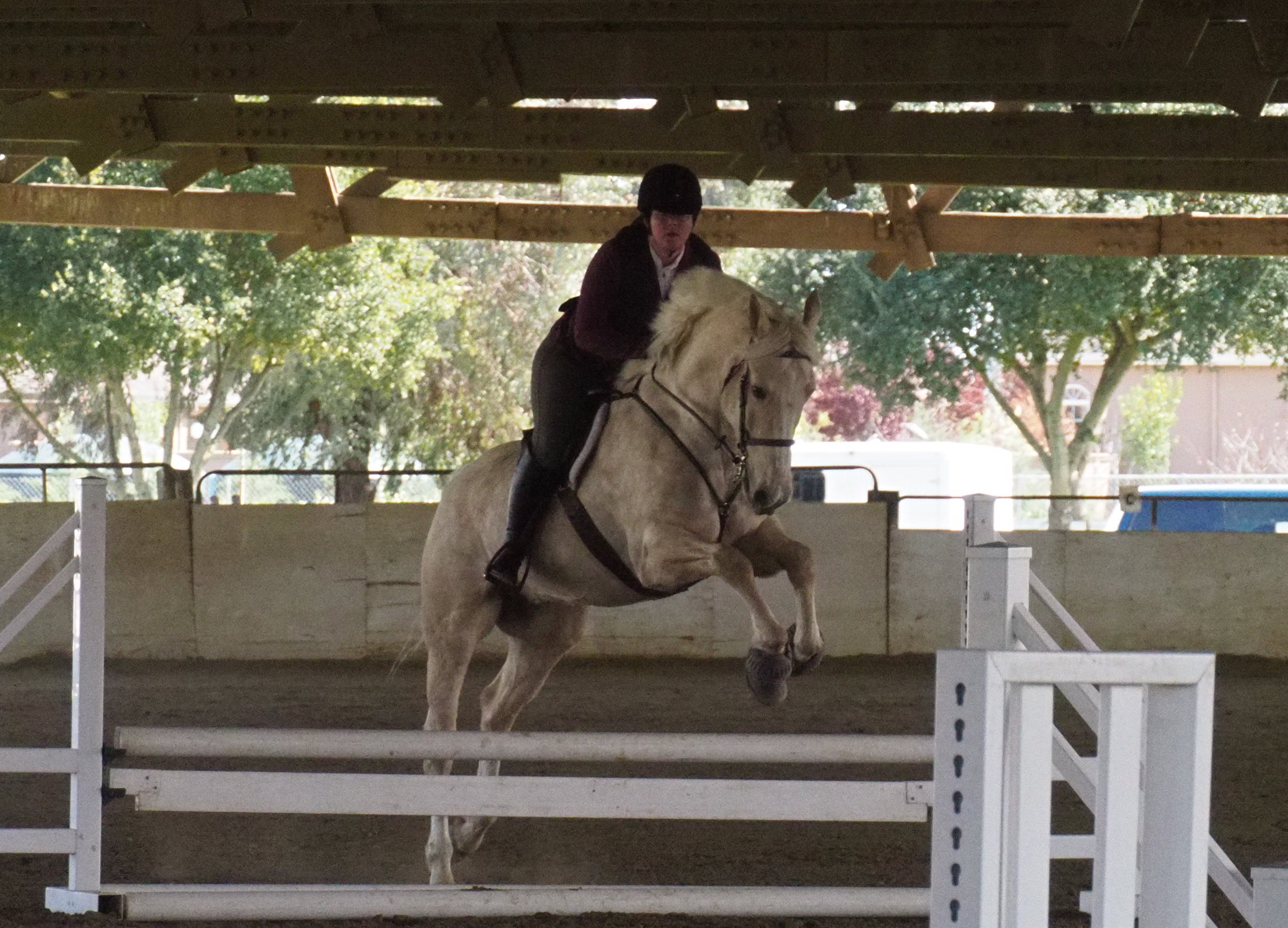 And then we were done. We racked up 3 first places (no ribbons for the warm up round) and the division Championship. We deserved absolutely none of that, but it didn’t stop my from hauling in my loot. All the ribbons and prizes are one of the great things about hunter shows. I traded one of my blue ribbons in for a green ribbon, got a bag for the championship prize and a bunch of random things (like a dish mat and a scarf) for 1st place prizes. 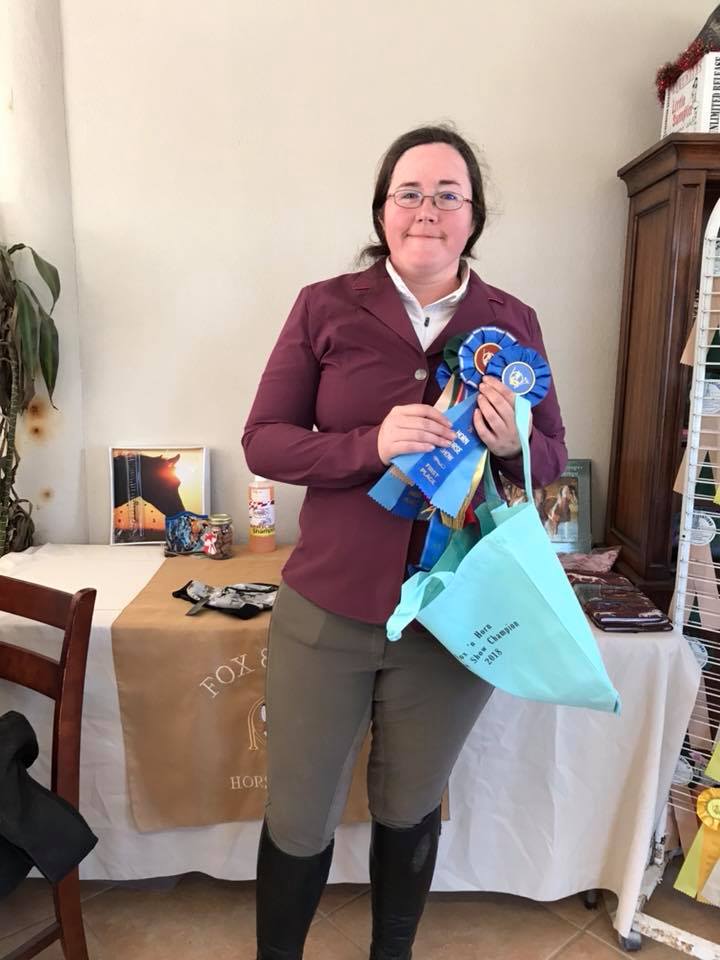 The prizes and ribbons are great and I had a good time, but I will admit to being frustrated. Levi has been to this facility before – multiple times. A month ago he was jumping 2’6″-2’9″ at the Ashley Adams clinic. Now we can’t crawl around a 2′-2’3″ (actual height) course without multiple refusals and a knockdown. I’m just kind of tired of it all. I miss my mule.