This last weekend my husband and I attended the Northern California Area VI Adult Eventing Camp. We’ve both been looking forward to this for a while. It’s 3 days with 3 clinicians teaching all three phases. Camp was held at my favorite eventing location: Eventful Acres. Camping and catered food were included and it was all adults. As someone who generally find themselves competing at a level with small children, it was really nice to have a weekend with just adults.

Unfortunately, Eugene pulled up lame before the event. We tried getting the chiropractor out, but that didn’t fix it this time. Luckily, we have a backup horse so Levi got drafted into the big leagues. Because we signed up for camp so long ago, my husband had actually signed up for the Intro/BN group (we signed up for camp before even doing Camelot so Eugene hadn’t done BN at that point). I didn’t know he’d picked that group or I’d have had him change it, but it ended up working out for the best.

We left a lot later than I wanted to on Thursday. Our trailer was in the shop and they didn’t get it fixed until that morning. I picked it up at noon which was when I had wanted to be on the road. We raced to shove everything and everyone on the trailer and get out of the bay area before the traffic hit. Around here, rush hour starts at 2:00 and goes till 7:30. We managed to skip most of the traffic though not all and it ended up taking about 5 hours to get to camp. And it freaking rained. I know everyone who doesn’t live in California doesn’t get it, but it is not supposed to rain here in the summer. 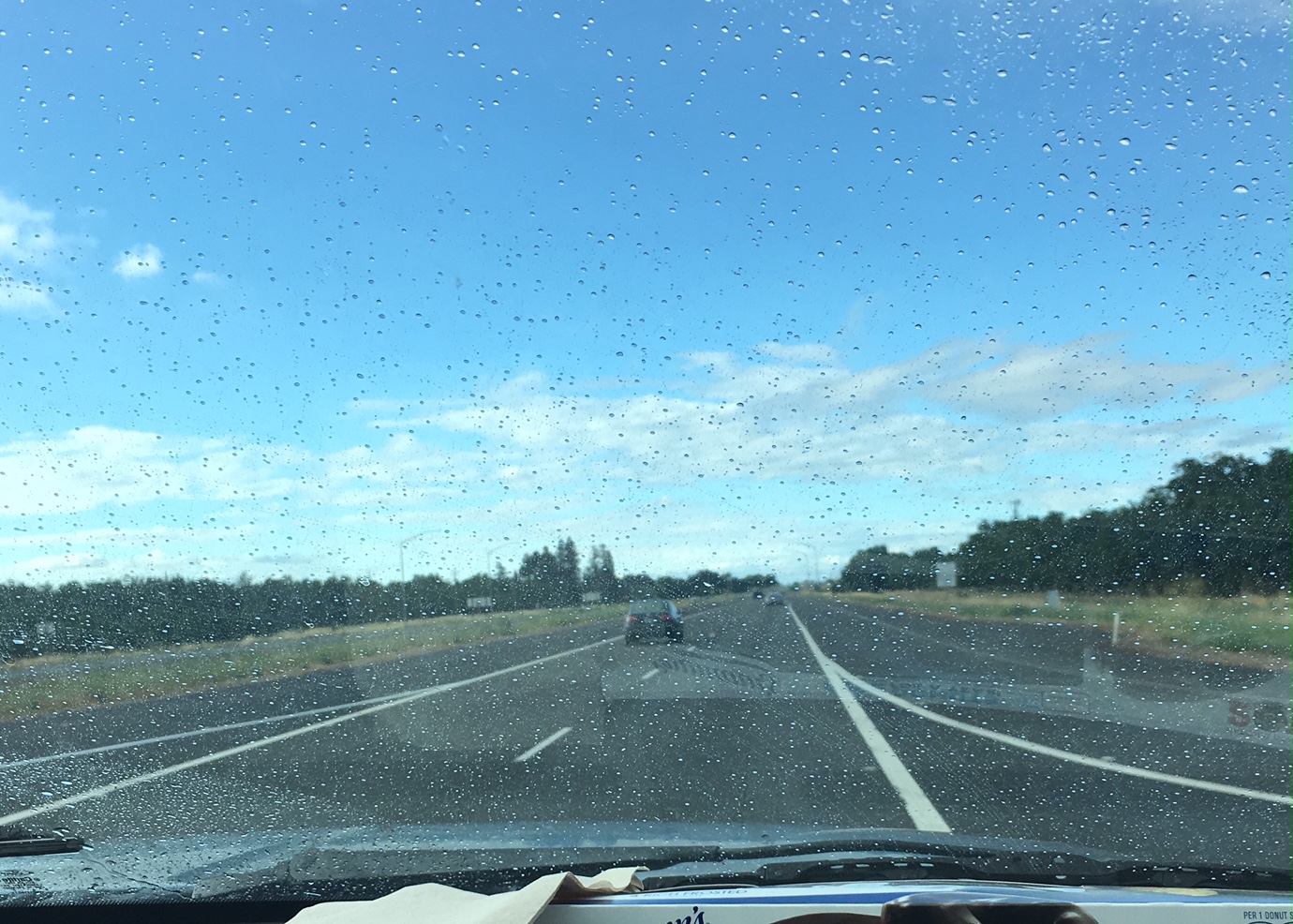 Once at camp, we bedded down the ponies and got ourselves set up to camp in the shade. Dinner Thursday was potluck and the catered food started Friday morning. It was really nice to not have to worry about packing or cooking food. We weren’t sure how much food there would be and brought a bunch of snacks, but we didn’t need them at all. There was tons of food and lots of variety. I don’t eat that well at home. 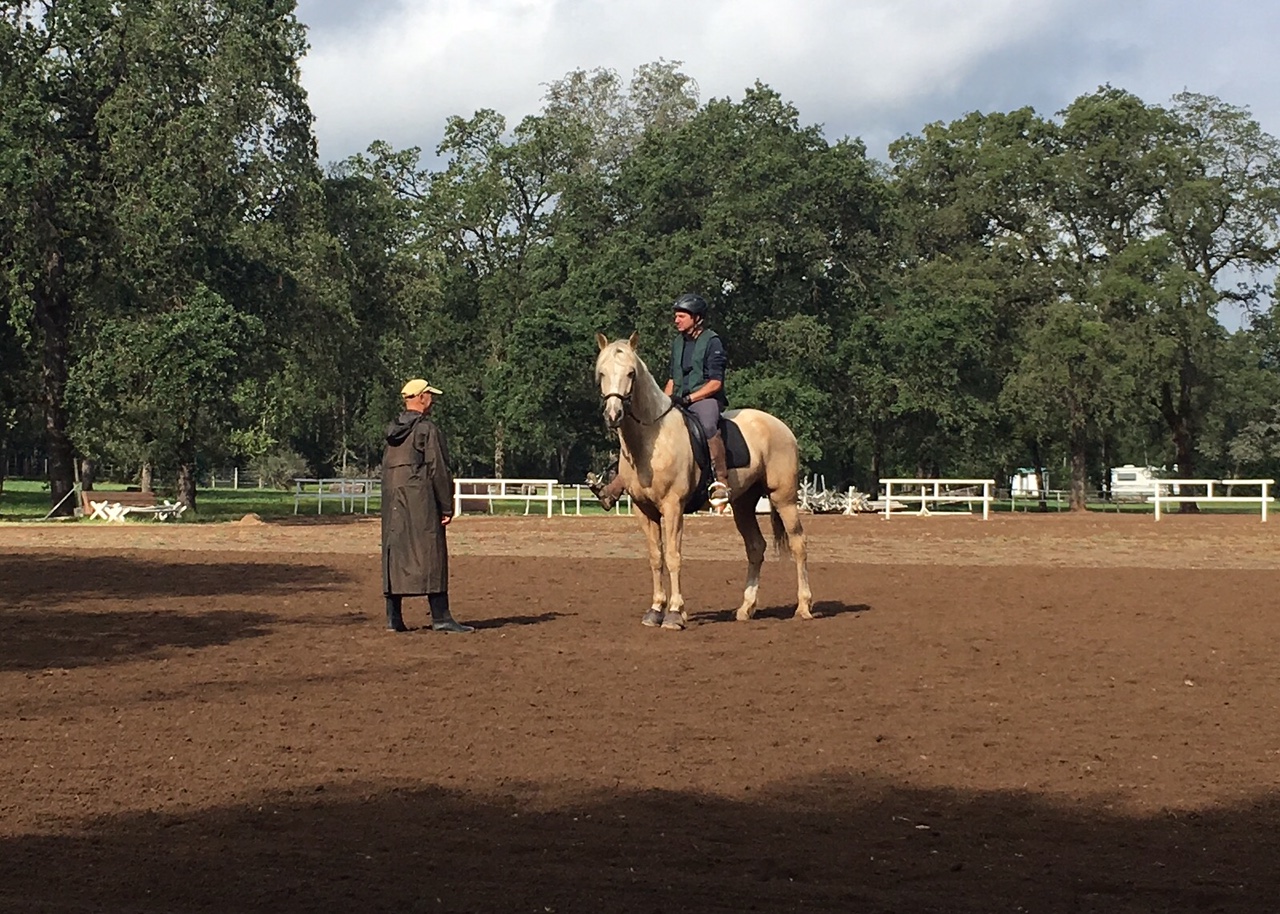 I returned from the camp and had to spend a few days doing a project and didn’t get to write this post until nearly a week later so I honestly forget a lot of what they were working on. I did take some notes though. Obviously nothing is an exact quote, but it’s the gist of what he was saying.

They spent the whole lesson on the 20 meter circle and focused mostly on walk and trot since Levi’s still so green. One note I wrote down was to “shorten the rein and emphasize side to side of rider motion to keep the horse from breaking in to trot from the walk when going from free walk to medium walk.” 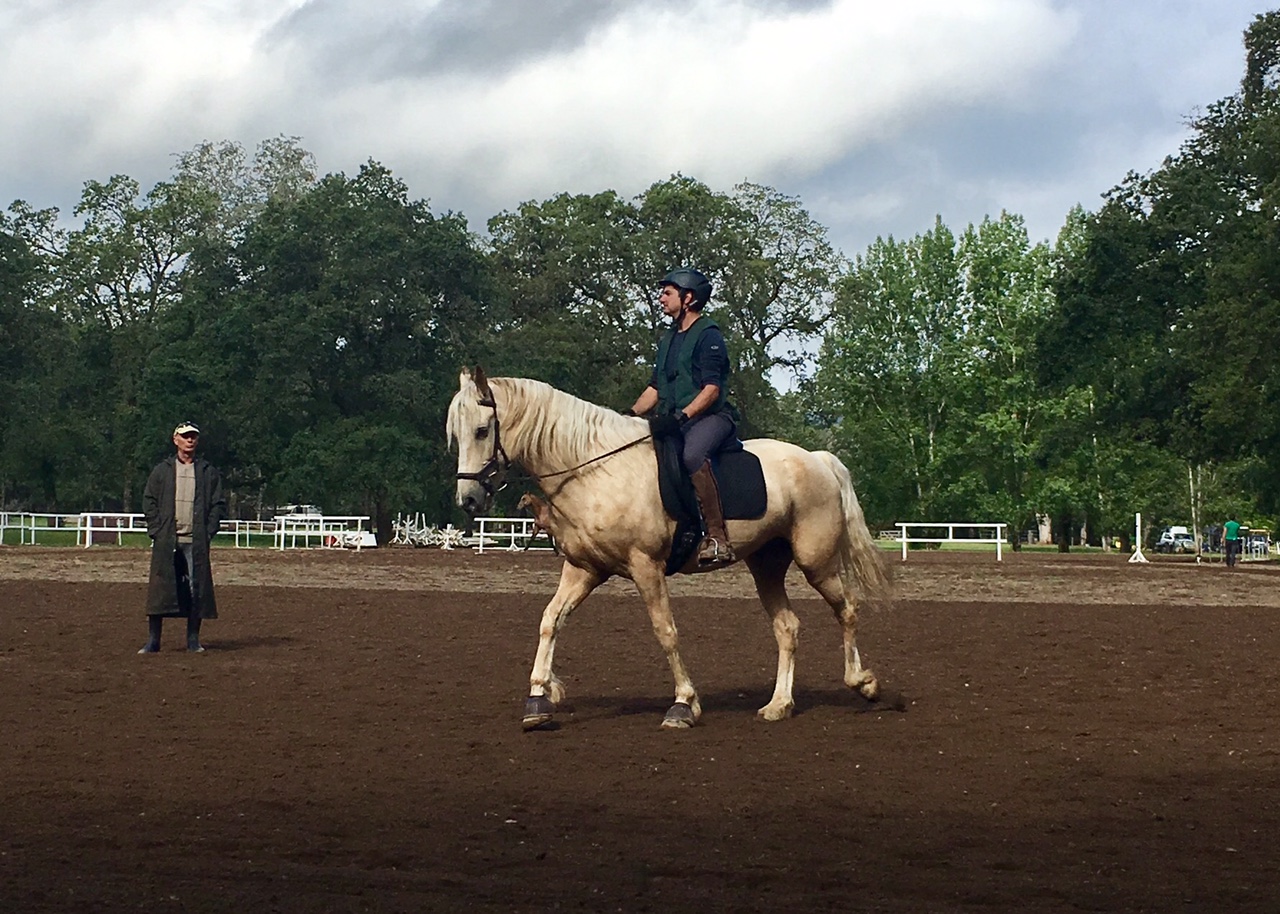 The did lots of trotting work really trying to get Levi to settle into a consistent pace and use his body correctly. He was given opportunity to stretch into the bit, but that’s not something he really knows how to do yet. However, he did go from this: 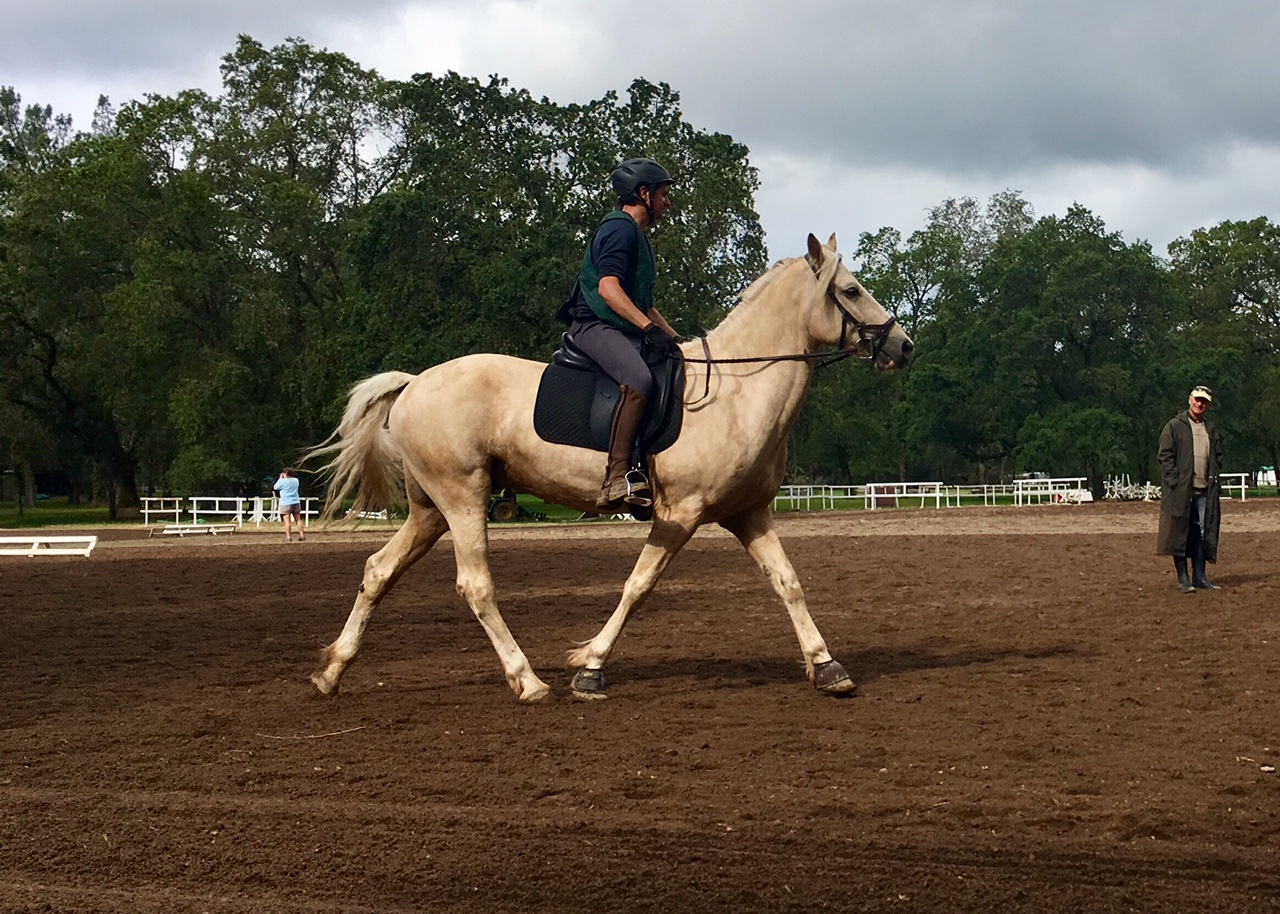 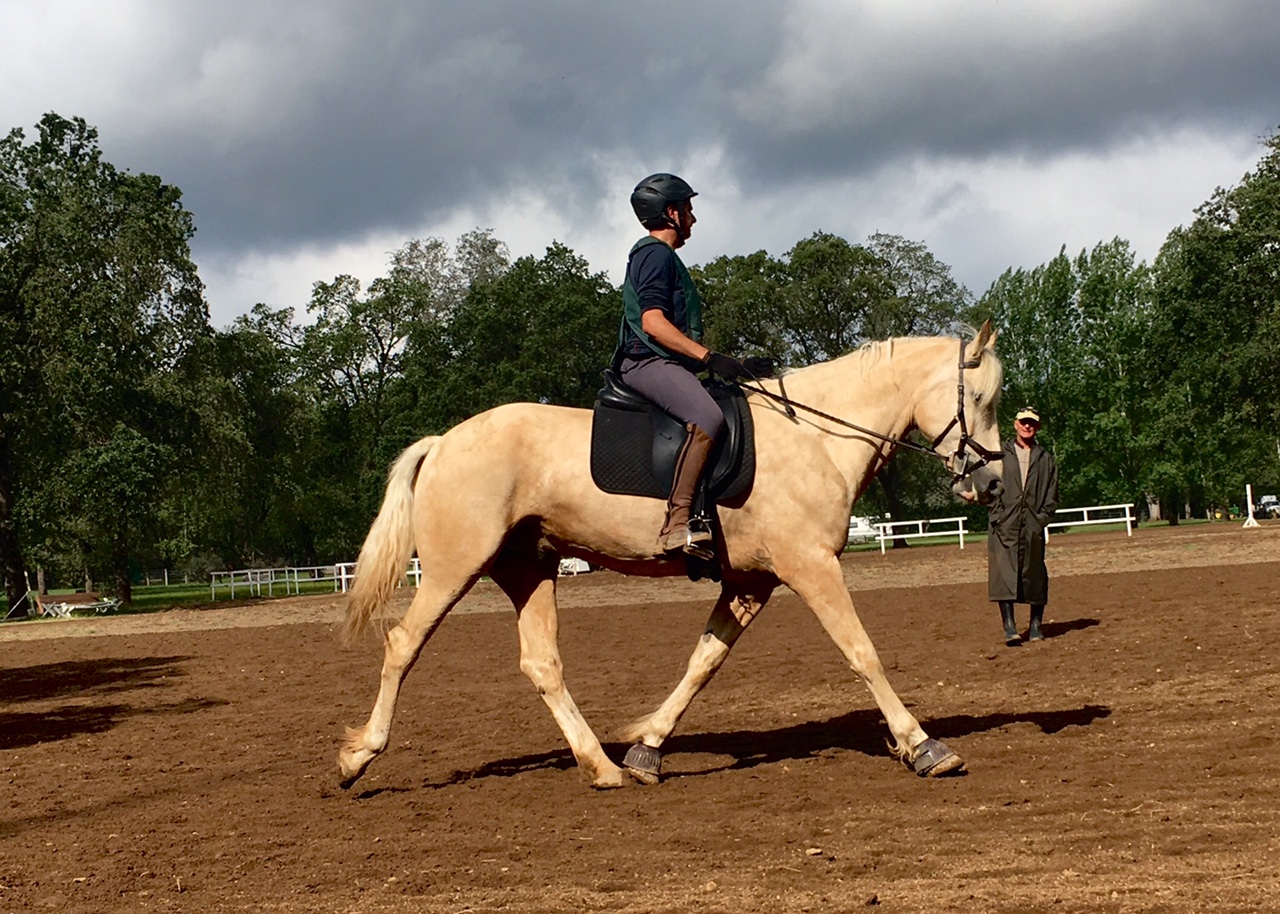 They also worked on the canter and I really liked this line from Yves: “the most important stride of canter is the next stride.” You always have to keep thinking about the future to keep them going forward. With a lazy noodle of a horse like Levi that’s particularly true. 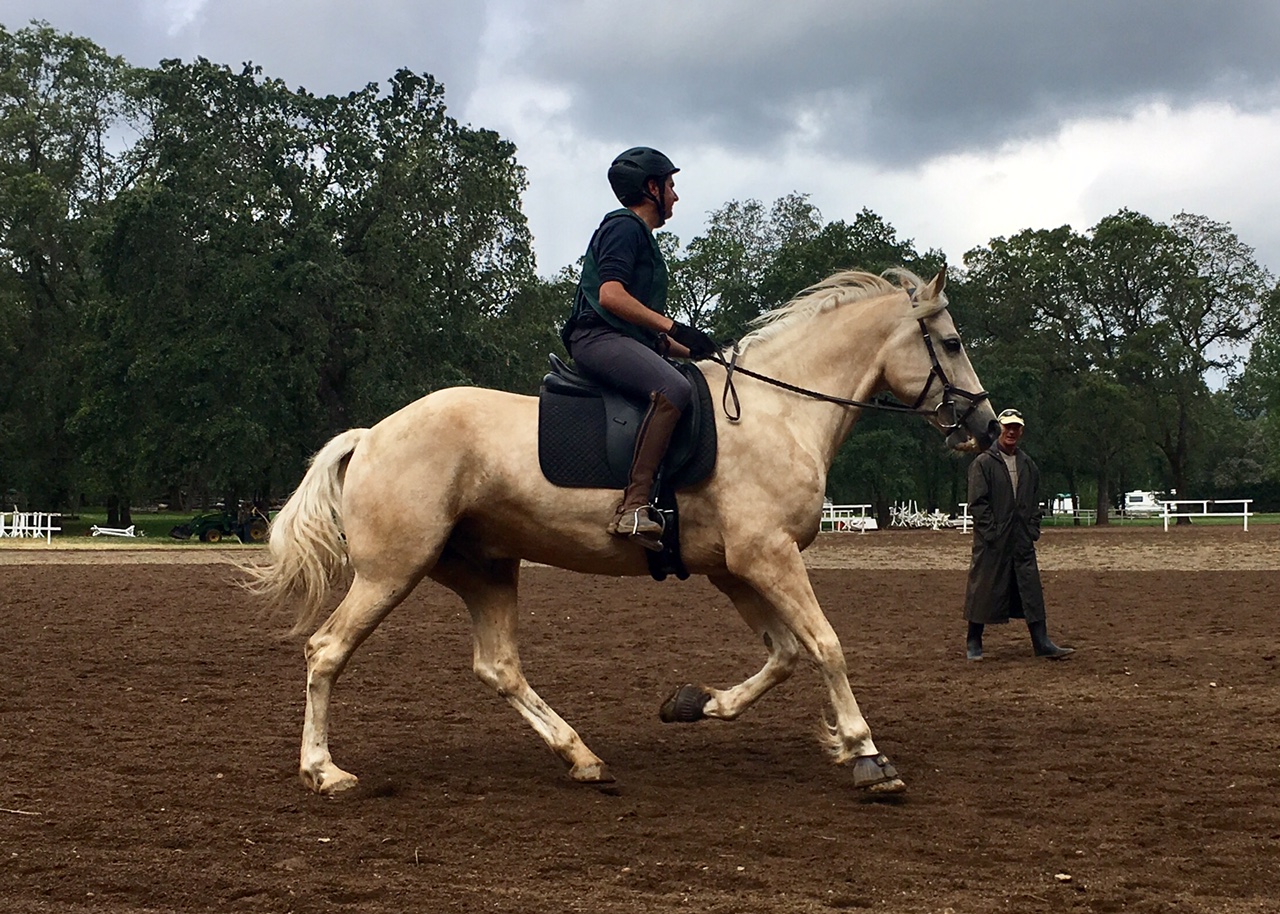 The other really interesting comment was regarding leads. Levi likes to keep his head to the right so he likes to canter to the left. To get the right lead canter, Yves suggested “manufacturing” that same feeling to the right: slow down the left, speed up the right, get a bit of counter flexion to the left and then ask for the right lead. After the lesson my husband was commenting that he really liked that advice and planned to use it with Eugene and I reminded him that I’ve told him the same thing many time before but just not these exact words. This is why we love riding with different trainers wherever possible: the way some people teach/explain things can really make a difference.

After his 45 minute lesson Levi was so exhausted he took a long nap. He’s never had shavings before and he was really loving it. I found him flat out, eyes shut, lips twitching multiple times throughout the weekend.

Levi has never had a bed of shavings before. He was loving it. #blmmustang #horsesofinstagram

My dressage lesson was with Val Owens, who seemed pretty excited to meet the mule. Everyone was excited to see the mule. We gathered a little crowd of people who wanted to watch us go. 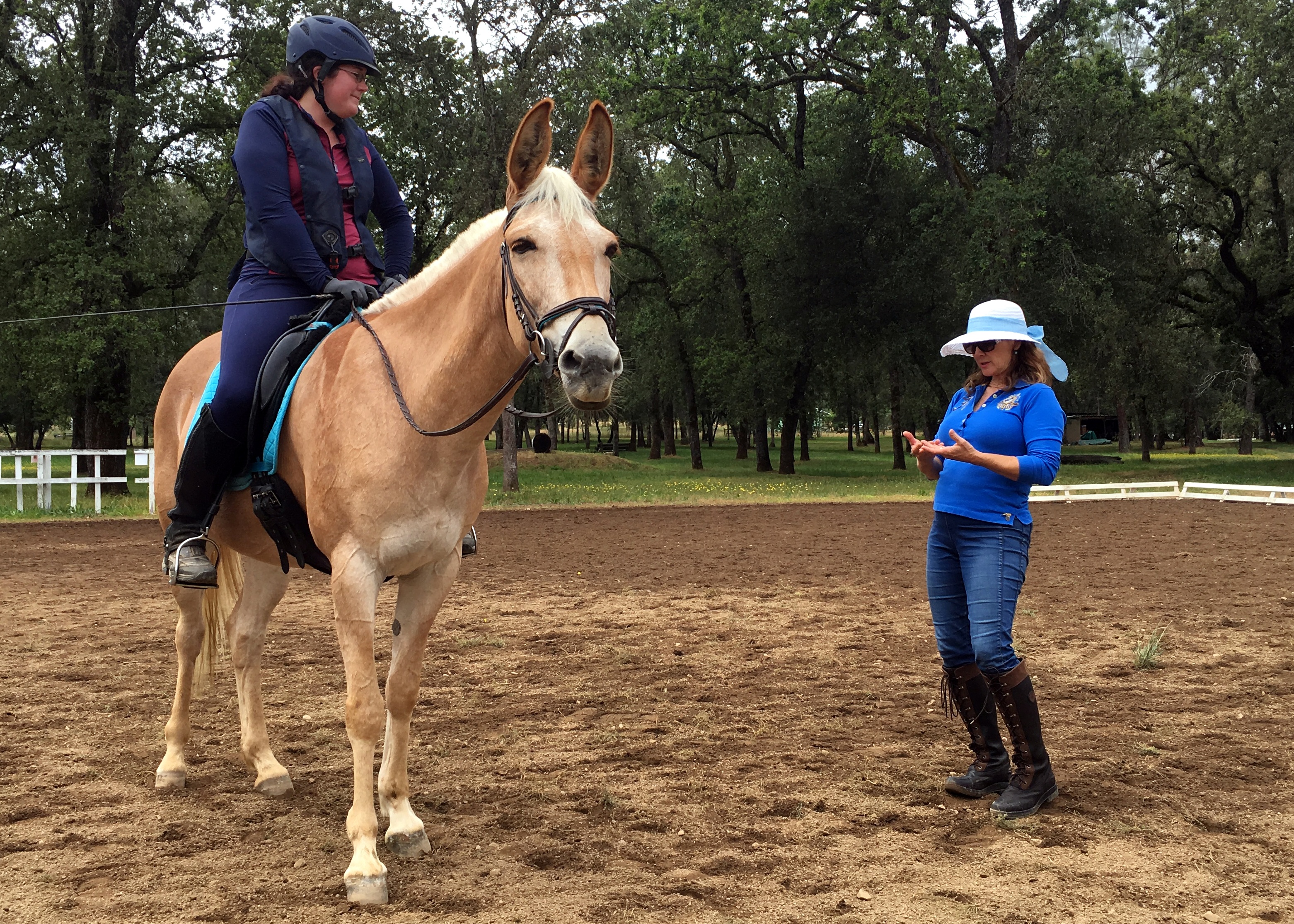 Thankfully, Nilla brought her A game. Once again, it’s a week later so I forget a lot of the details of what I learned from this lesson. We stuck to the 20m circle as well and did some trot work trying to get Nilla to stretch into the bit. 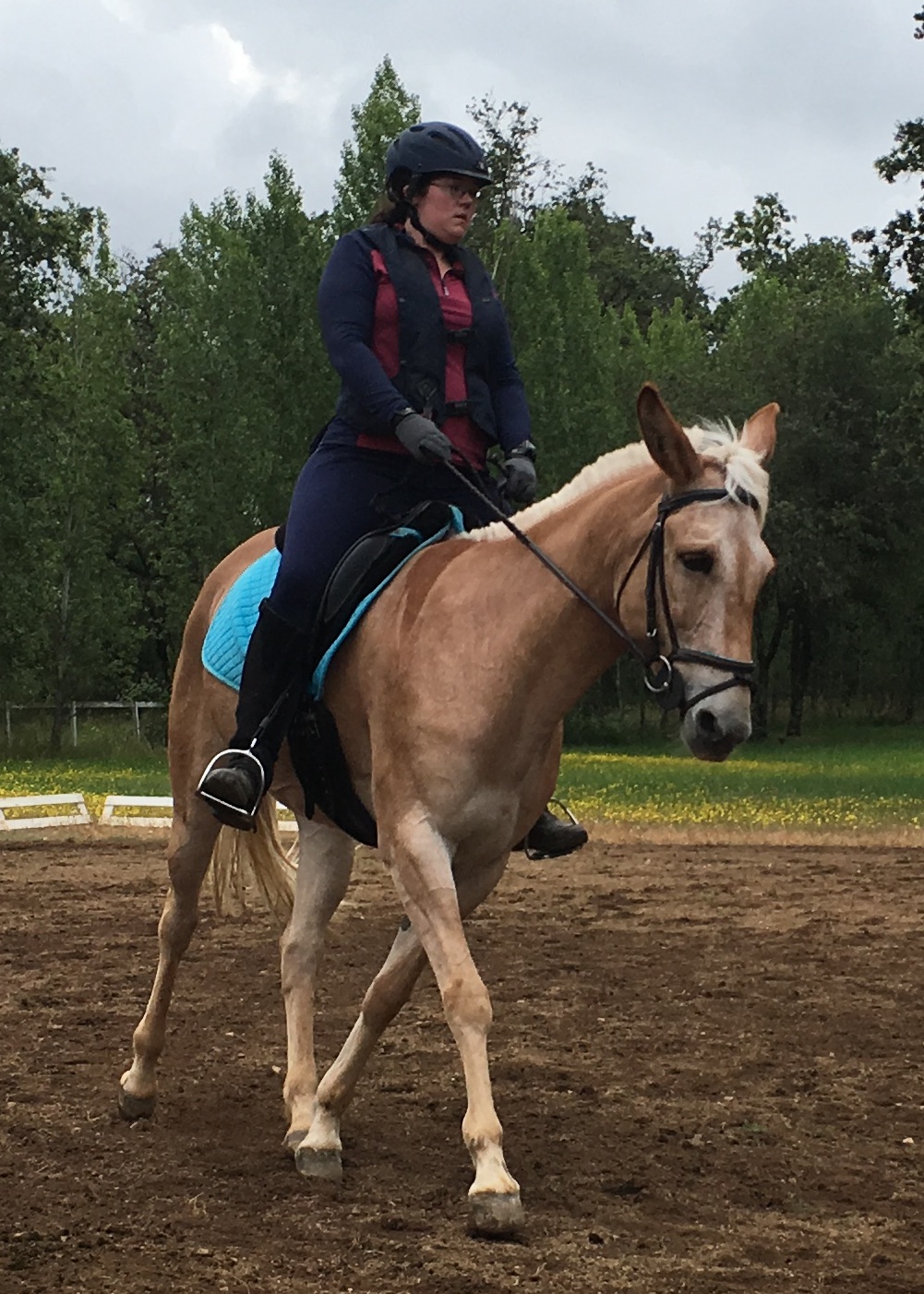 I mentioned the difficulties we have with cantering so we spent some time on that. I do remember some of Val’s advice for this part of the lesson. Because Nilla is so difficult to canter, I sort of let her canter like a hunter horse and just float the reins at her. If I try to collect her, she has about 2 seconds of patience for that and will then self-destruct and we will accomplish nothing else for the rest of the ride. Val agreed with me that collection wasn’t worth it and isn’t necessary at this level. That might technically be true, but we are certainly getting dinged hard on our canter work at shows. And I keep getting comments about her canter being too strung out and downhill so I need to do something. 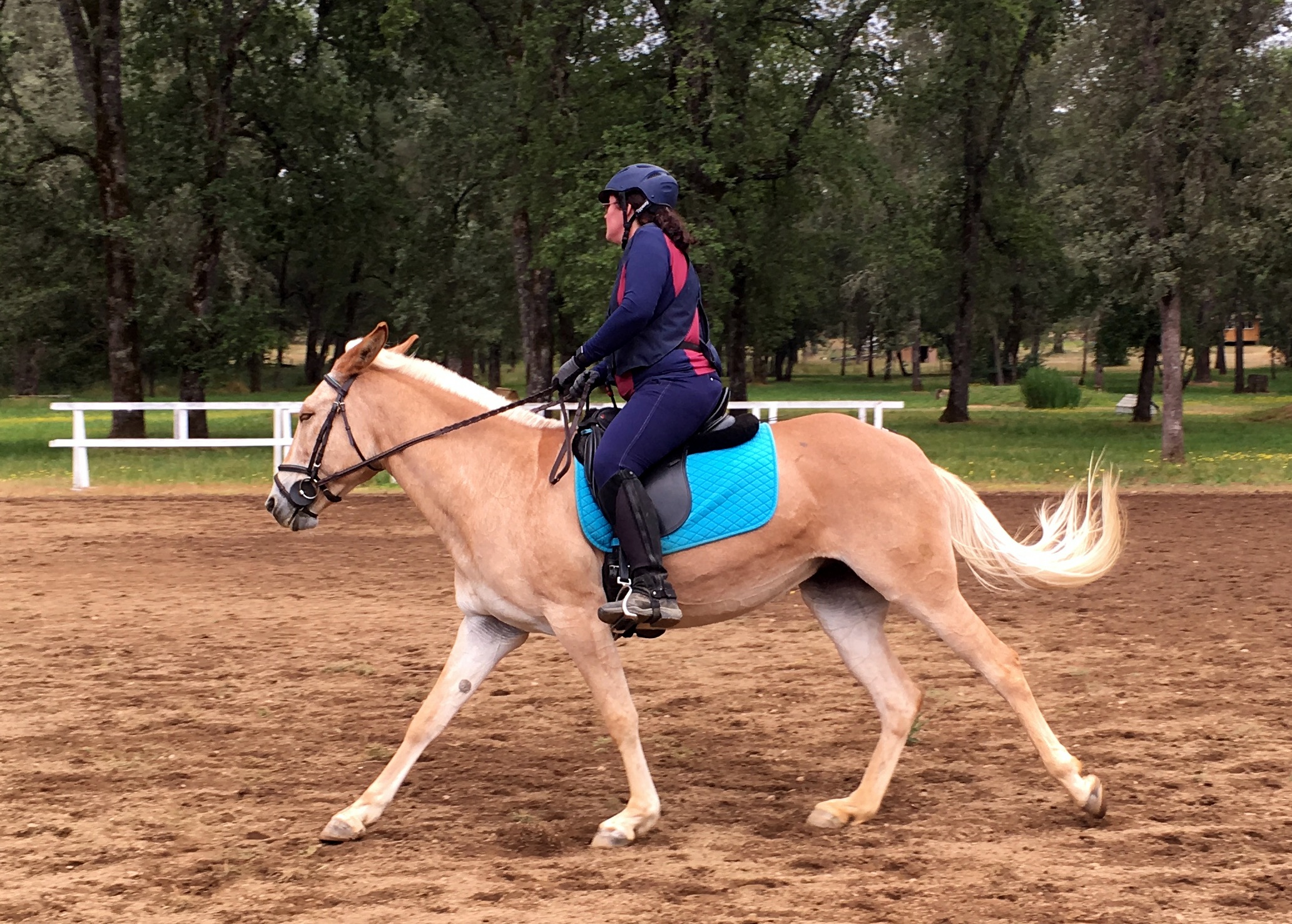 So we worked on getting Nilla to move forward into canter. I just sort of throw her into it and leave her alone. Val agreed about not fussing with trying to get her on the bit for canter, but suggesting she did need to keep her impulsion. So we did some work moving from regular up into medium trot and back down and then back up and asking for canter from the forward trot only. 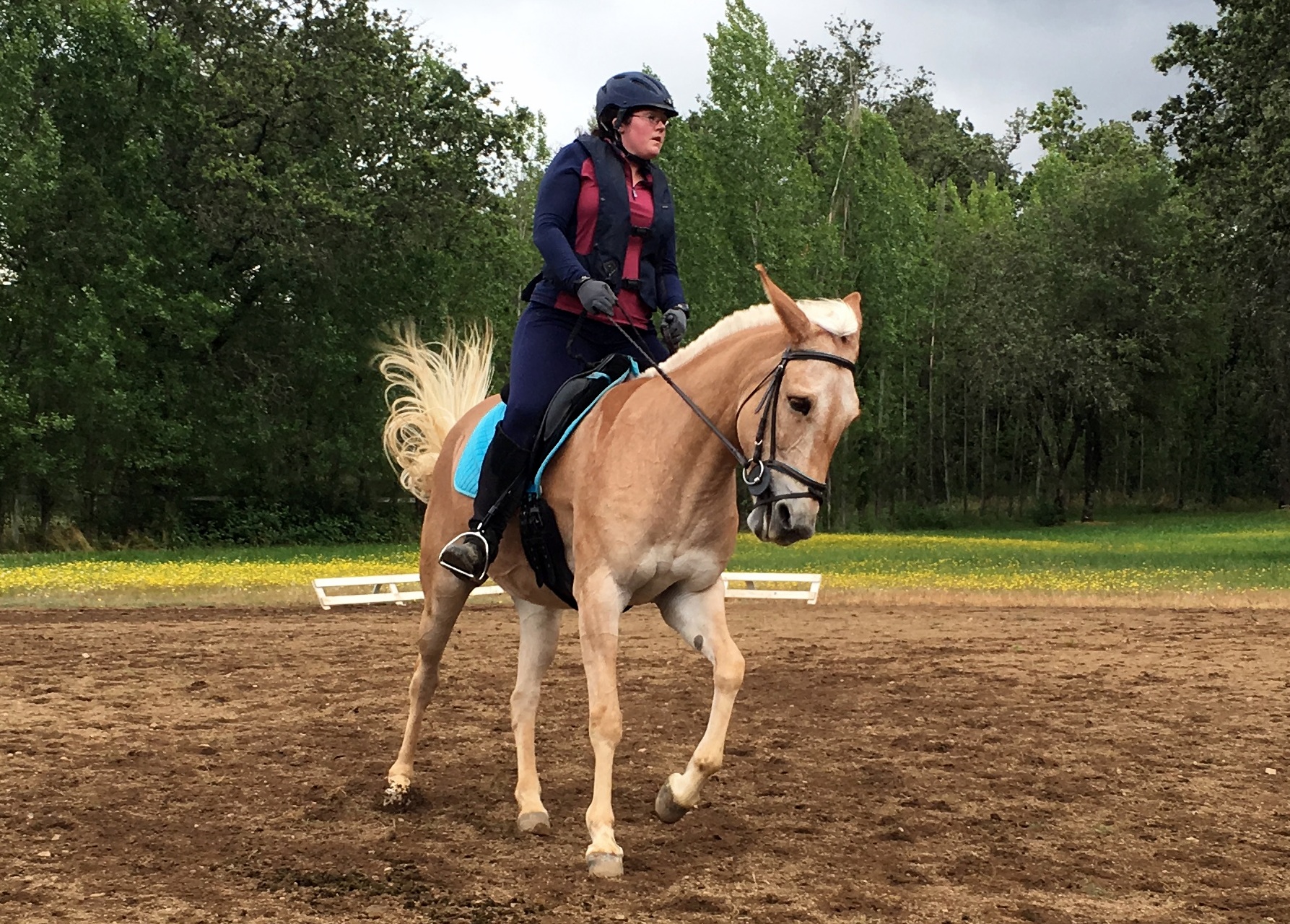 It was a pretty good lesson. Nilla was definitely in a good mood for it and behaving really well. I’m never sure what mule I’ll get on any given day, but I was happy to be riding her that day. And it was nice to not look like a complete idiot in front of the little crowd that gathered watching us. I don’t really like being watched, but Nilla loves her adoring fans. 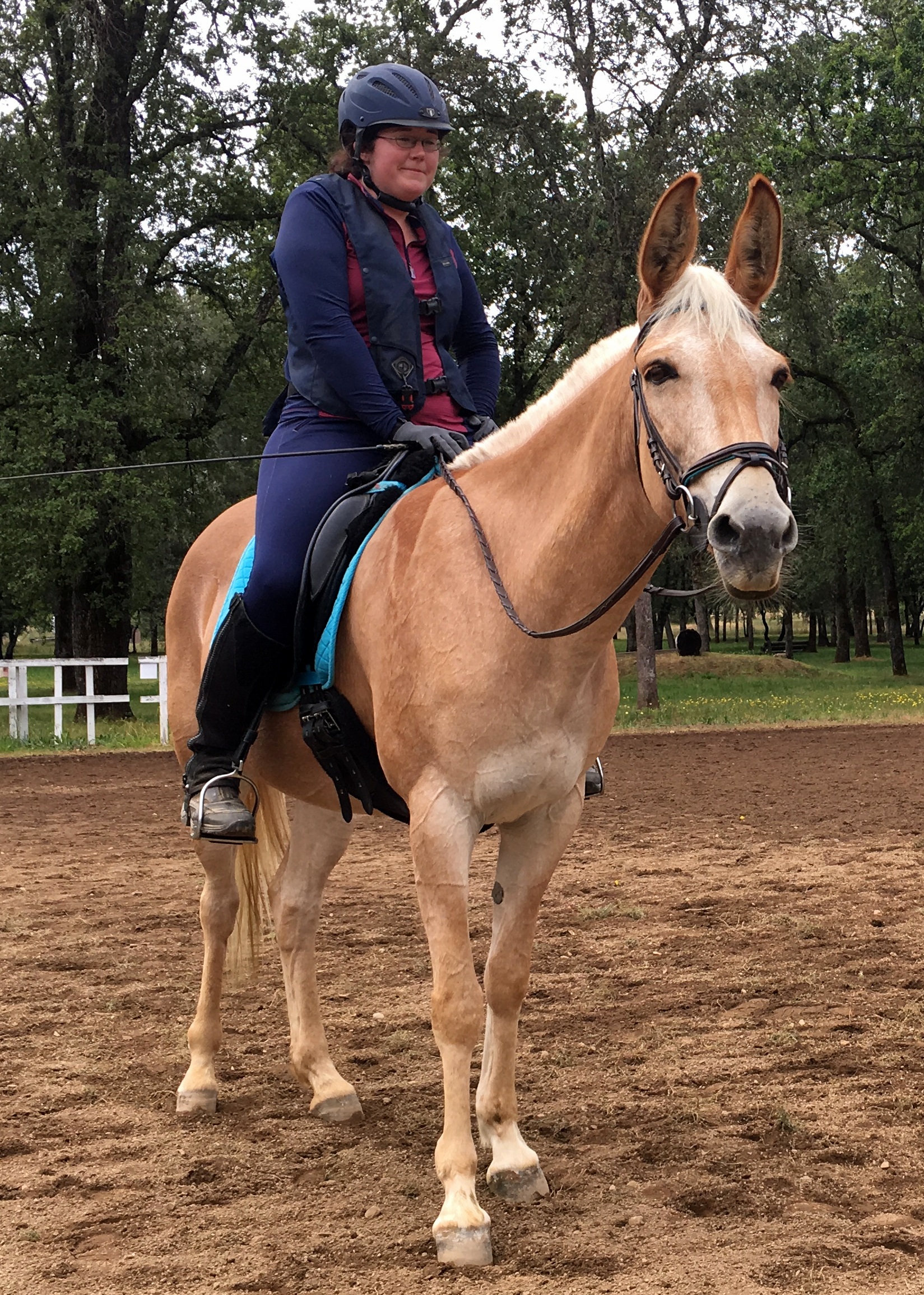