Although he wasn’t 100%, my husband was feeling a lot better on Sunday for his stadium lesson. He’d even managed to keep down some saltines for dinner the night before and oatmeal for breakfast. My lesson ended and we swapped my tack on to Levi and then headed over.

The theme of this lesson for Levi – and really the story of his life – is “I don’t know where my feet are in relationship to the world.” I have never owned such a clumsy horse. I’m sure that spending the first 6 years of his life in a feed lot did him nothing good. The Mustangs born in captivity tend to get more nutrition and grow up bigger – as Levi did – but the trade off is they don’t learn how to use their bodies. Eugene is solid even over completely crazy footing – like granite stairs in Yosemite – but Levi trips in the arena. And he really struggles to figure out how to negotiate obstacles. Even simple poles. 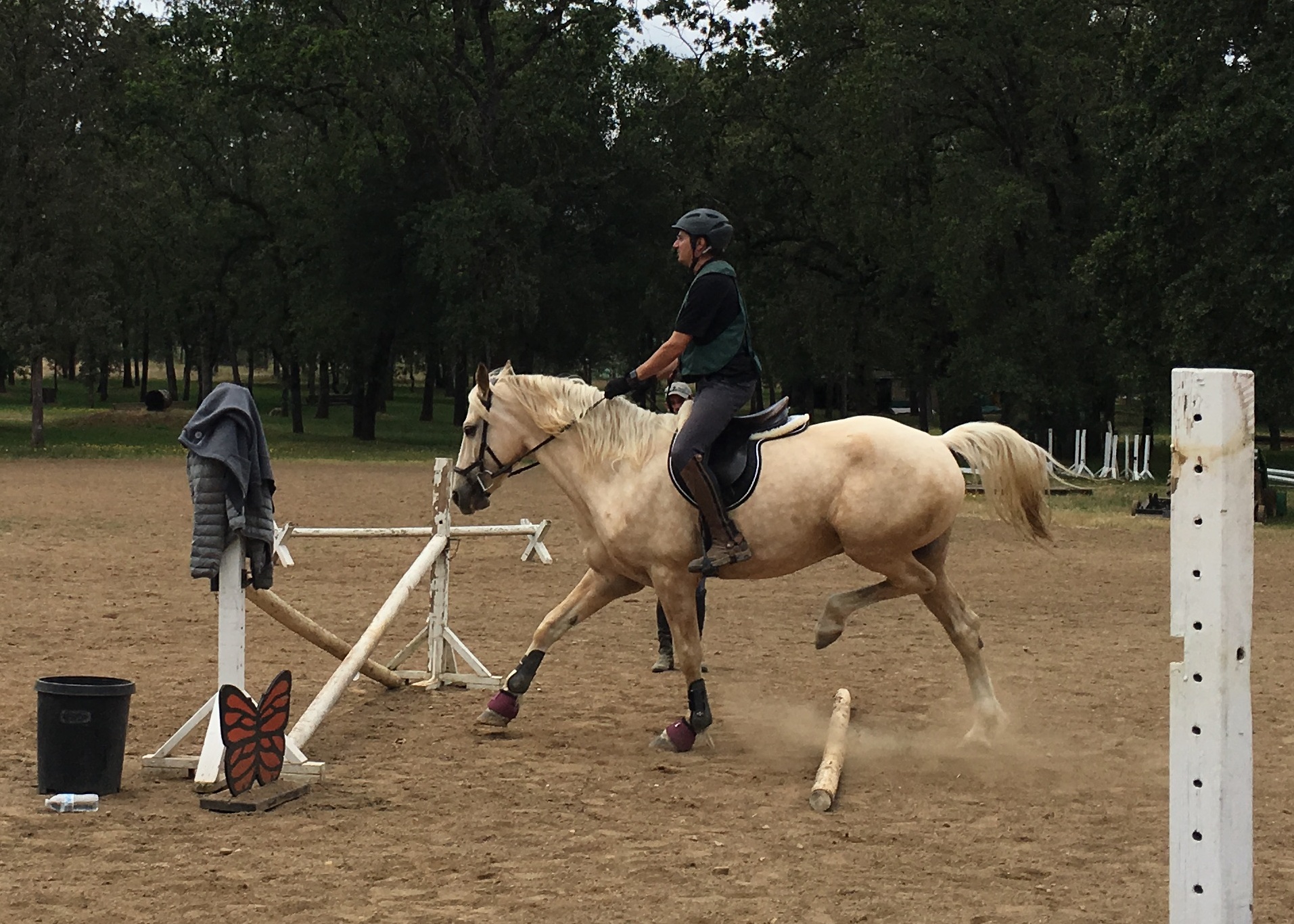 You can really see what I mean about the disconnect between his body and the world. He’s pretty convinced that pole is like 2′ tall.  His confusions extends to crossrails: 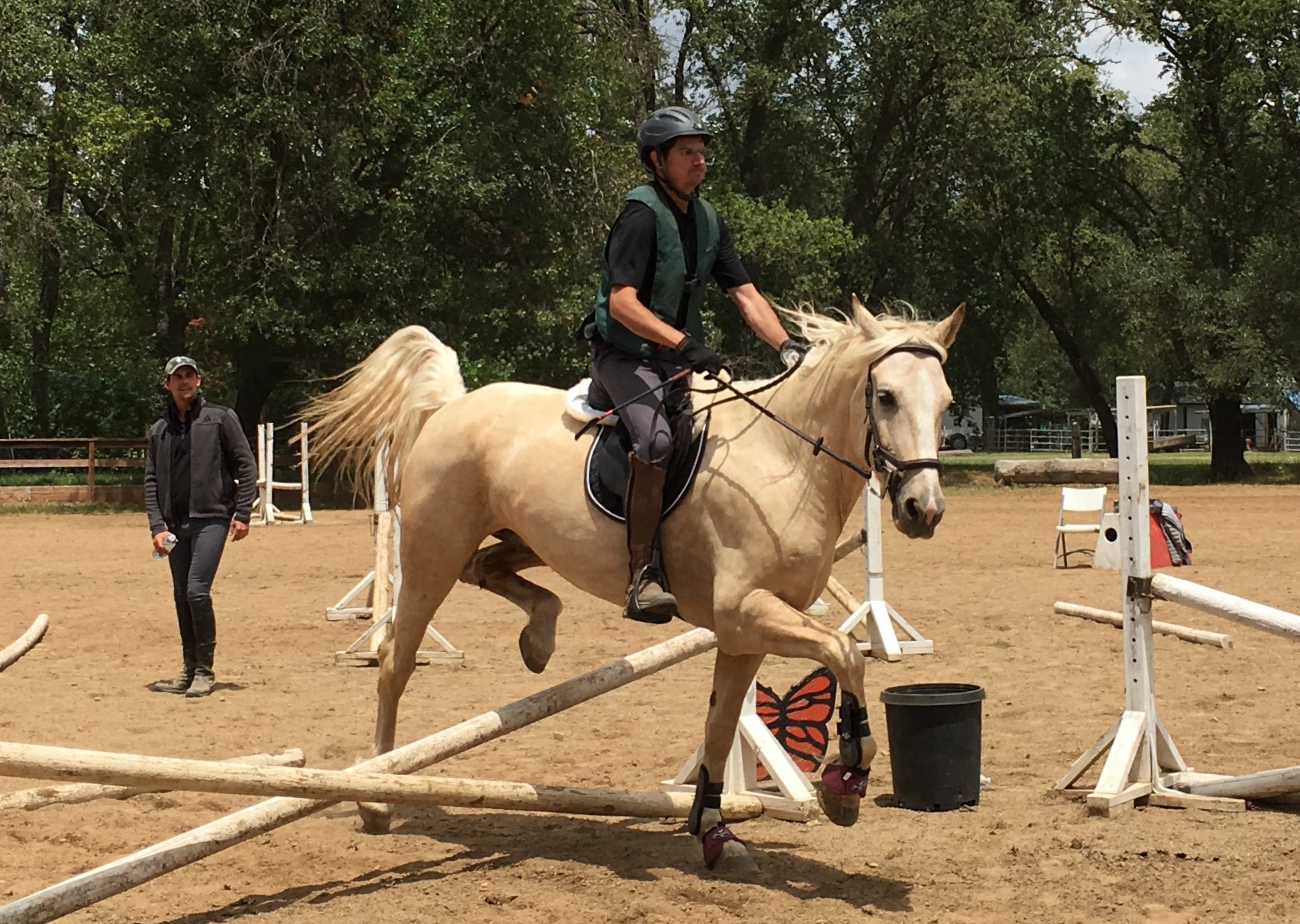 And angling over a cavalletti was just inconceivable. 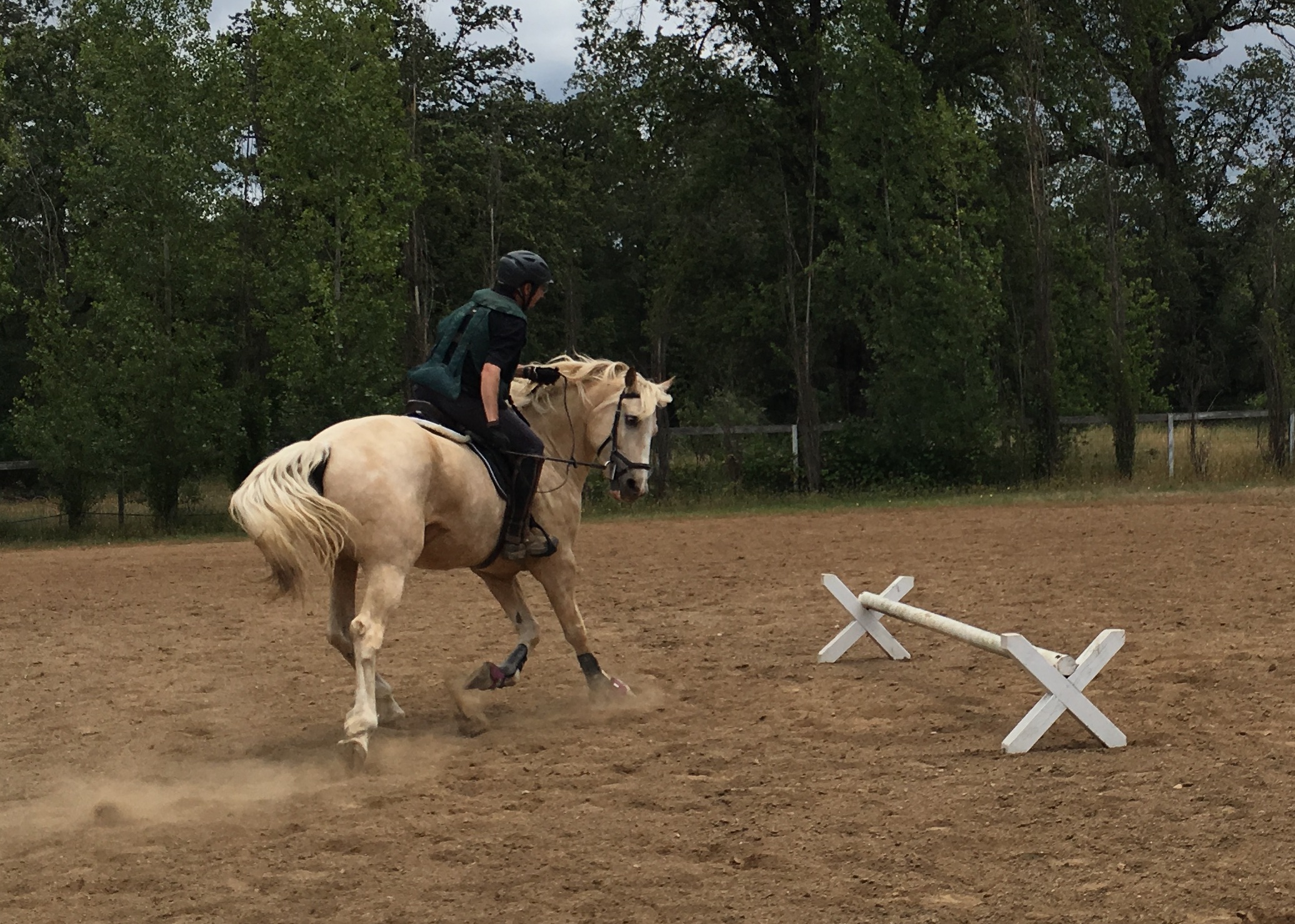 But bless his heart, he makes up for what he lacks in brains and natural ability with being a good boy. He might not get it, but he wants to be good. They did eventually manage to string the pole to crossrail to cavalleti slice all together. 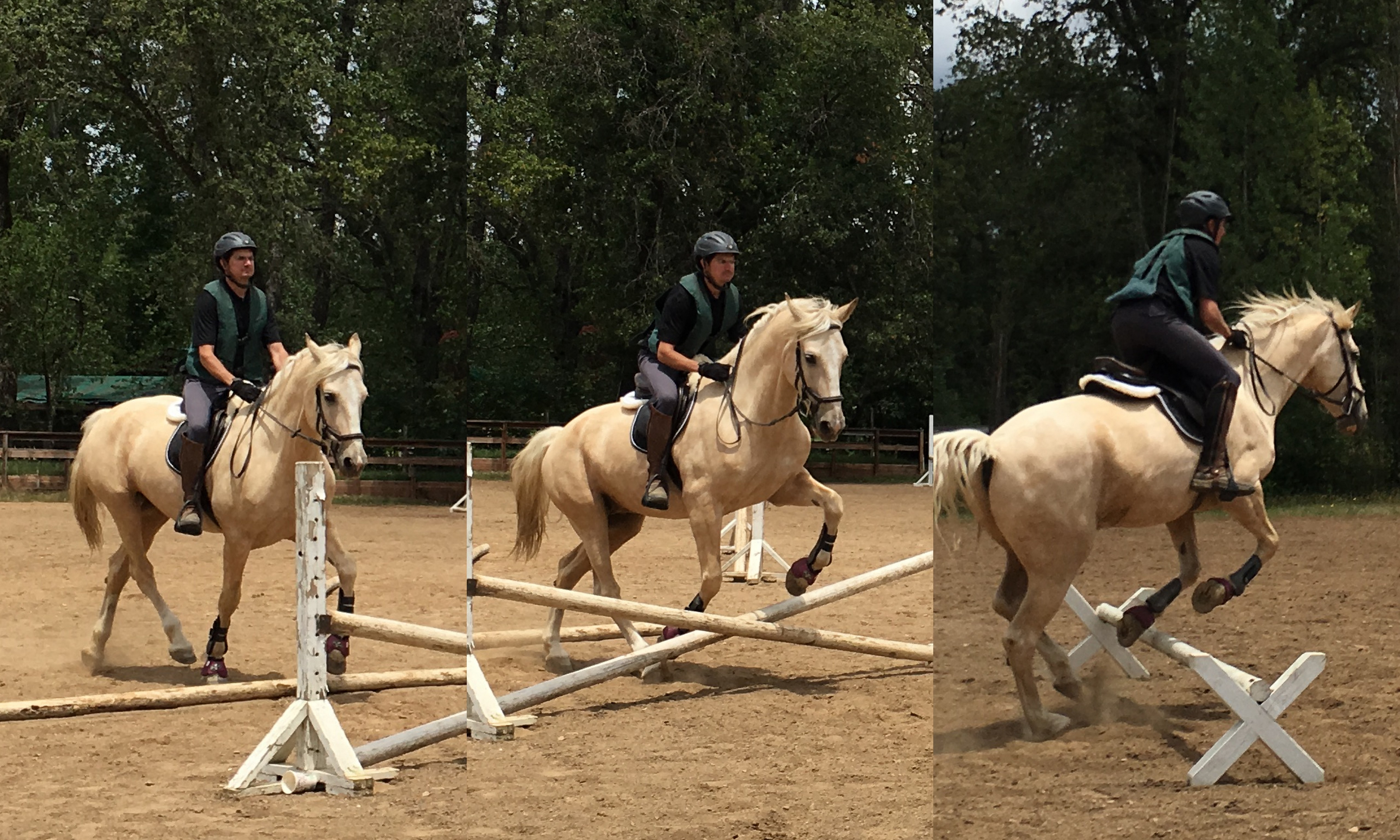 They did the same pole to crossrail to cavelletti exercise in the other direction and he even managed to look like he understood the concept. 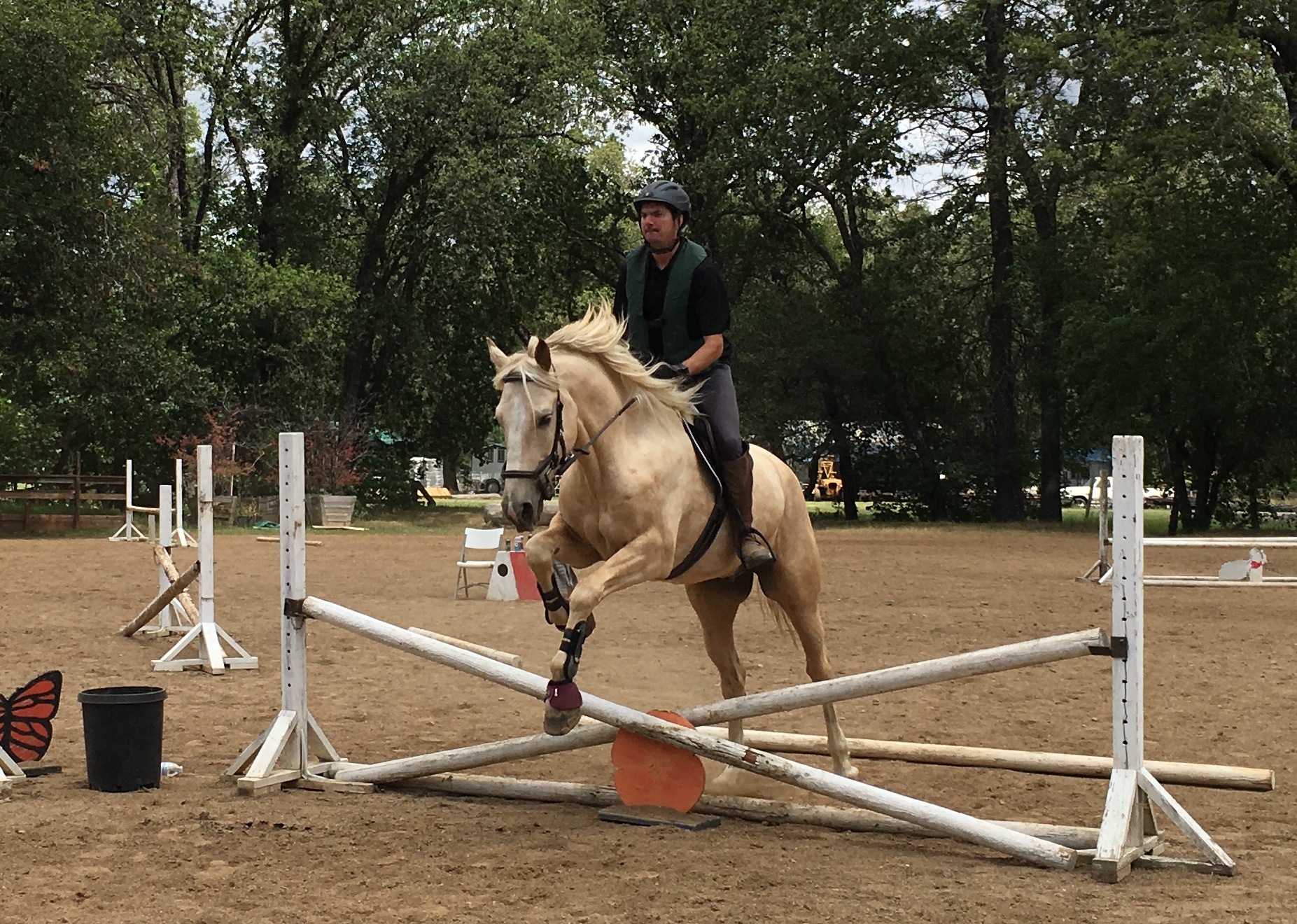 And I’d even say he looks like he’s enjoying it too. Of course, just like in my lesson, Alexis kept changing up the course. The next jump he had them do was the bounce. And poor Levi got to the first jump, realized there was a second jump and could not process that. He tried to stop to look at it, didn’t quite have enough time to stop and just clobbered it.

He did eventually figure out how to do it.

Levi continued having a hard time processing the poles though. And his method of processing is that he wants to slow down and stare at it. In the case of a canter pole, though, that’s only making his life more difficult, but it’s not like you can explain these things to him. 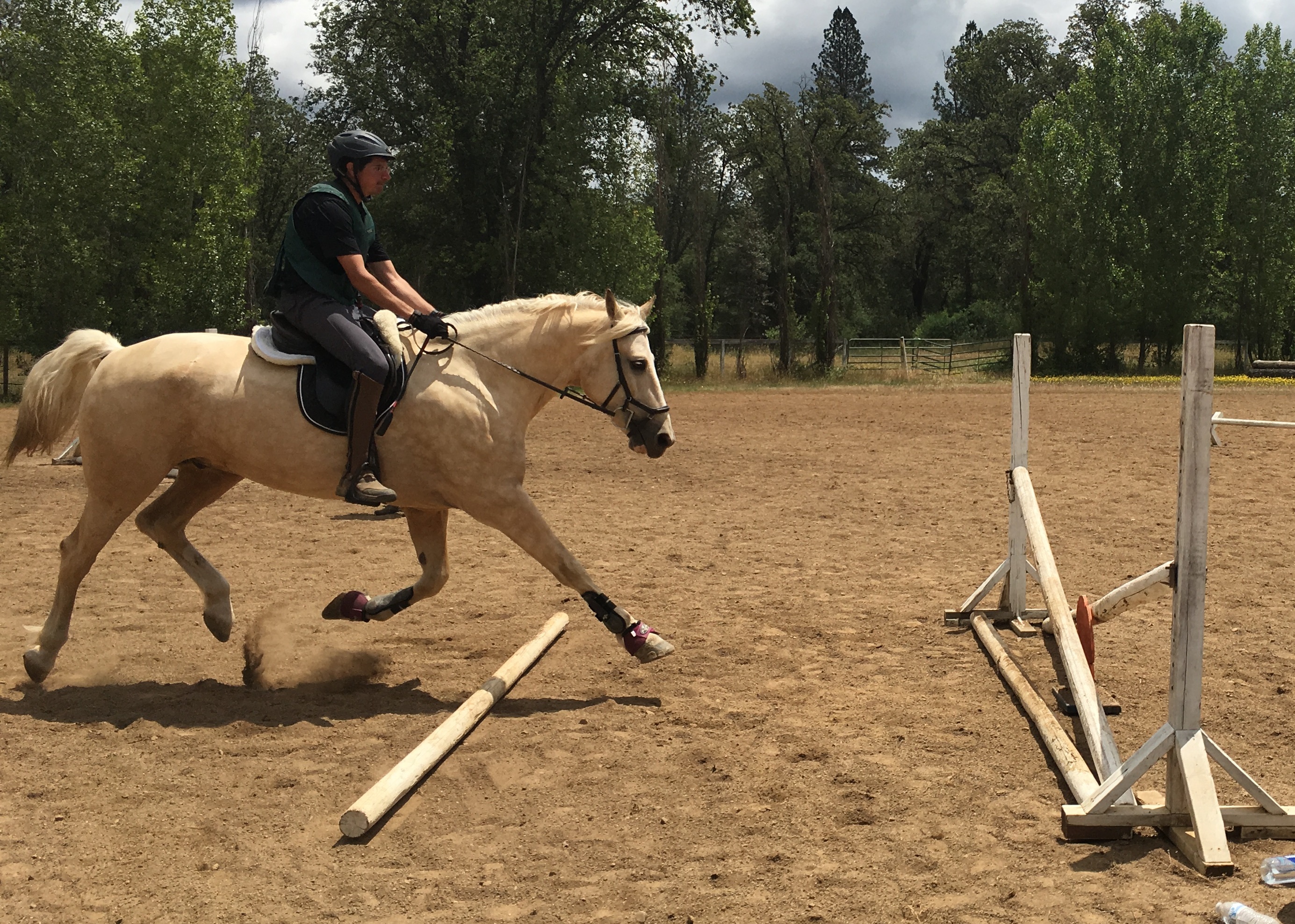 I love this picture. He’s just so funny. I think my husband did an excellent job staying back and letting him figure it out. I have a tendency to try to jump the jump for the horse so I’m sure I’d be up his neck right there. And really, at this stage, Levi just needs to figure it out for himself. The best we can do is sit back, leg on, and ride it out. 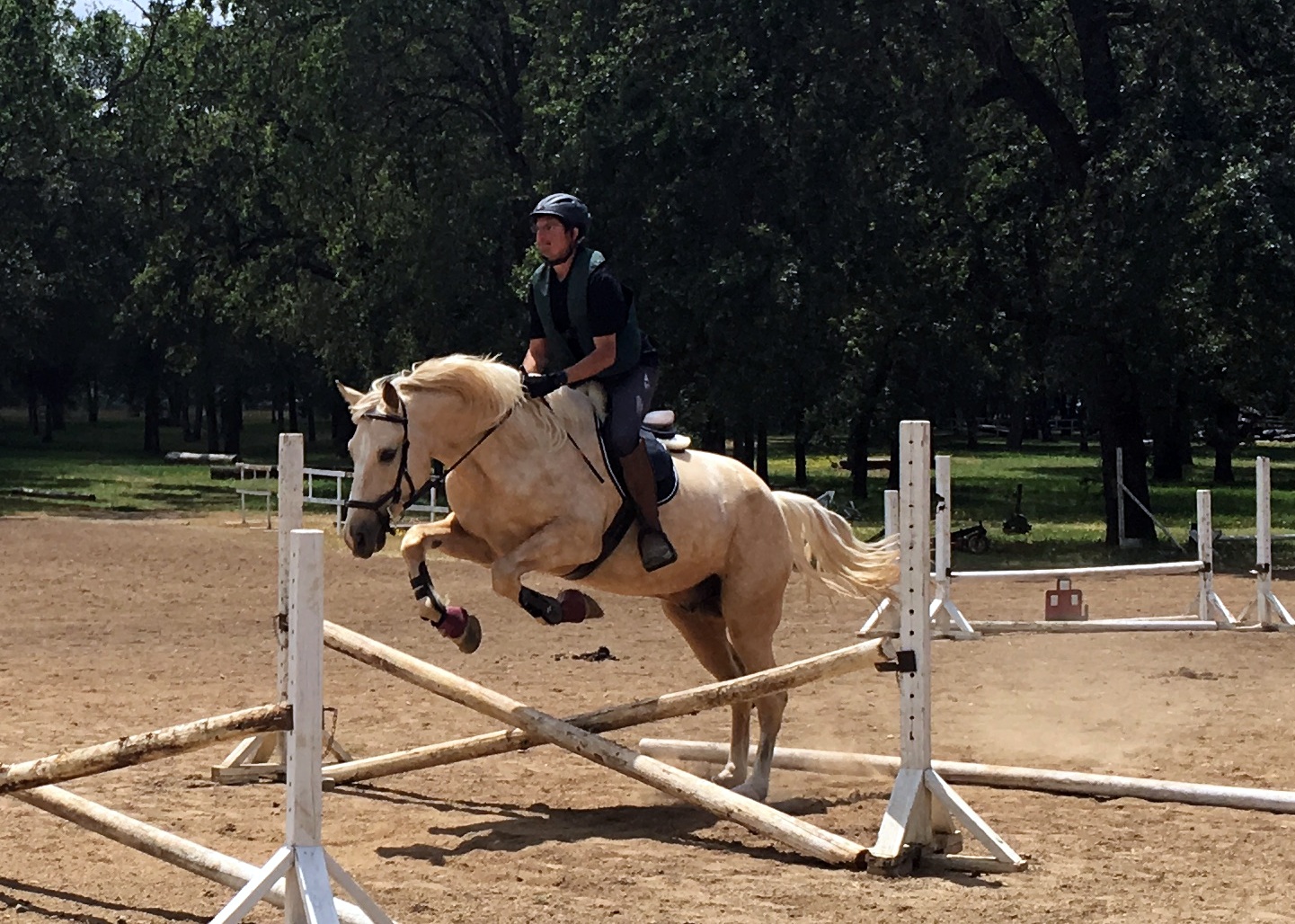 They did a lot of the same exercises that I had done like the bounce to a hard 90° turn to the Eeyore jump (in their case, the jump was just a vertical). Turning was hard and he knocked the rail the first time through, but didn’t actually stop at the new jump the first time. Came back around and cleared it nicely the next time. 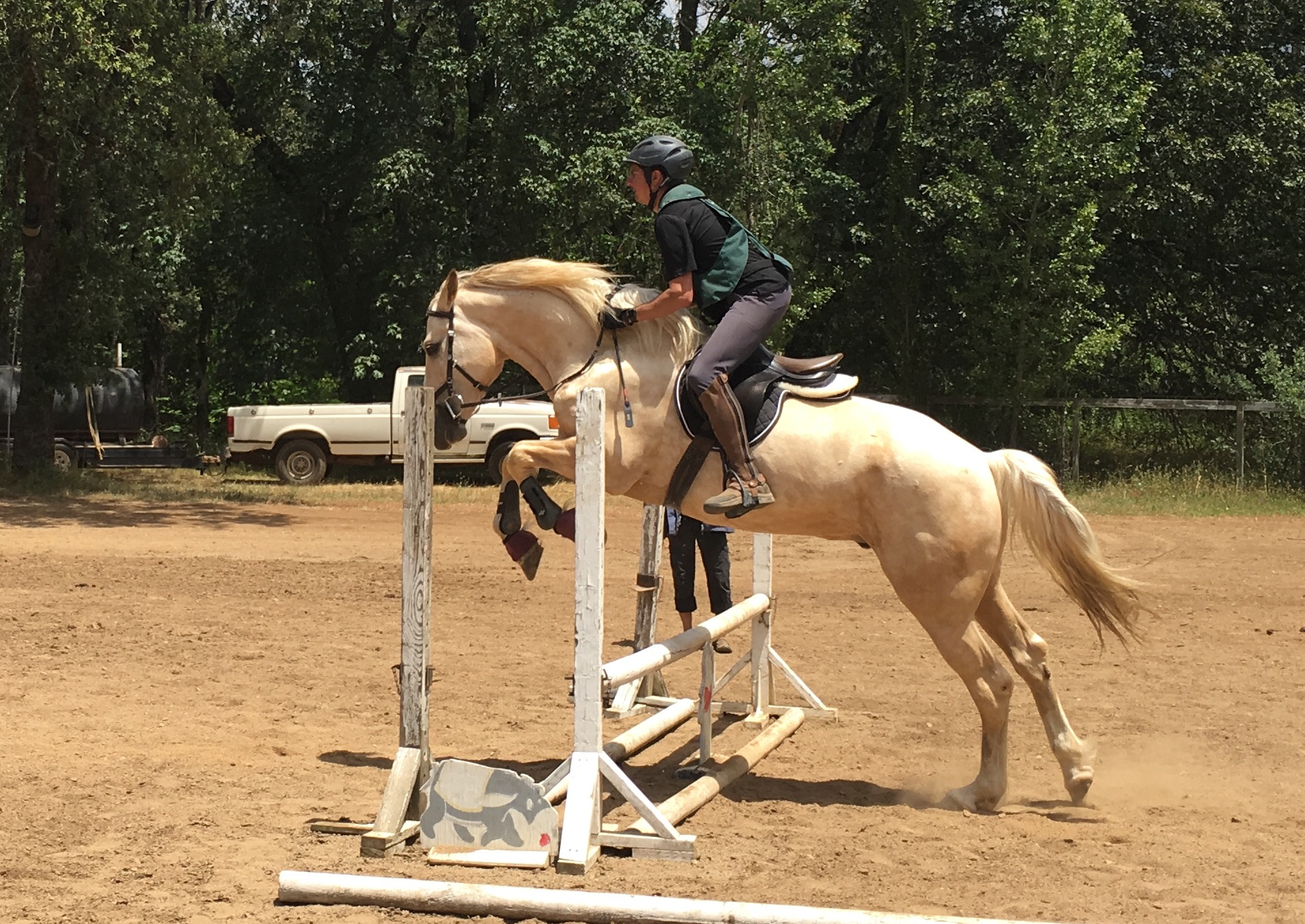 At this point Levi was pretty exhausted. He’s lazy to begin with. He’s doesn’t have much stamina on a normal day and he had done XC for the first time the day before. He was lagging a bit. So when Alexis had them do a line of 2 new jumps and one of them had a train cutout beneath it, he hit the brakes. 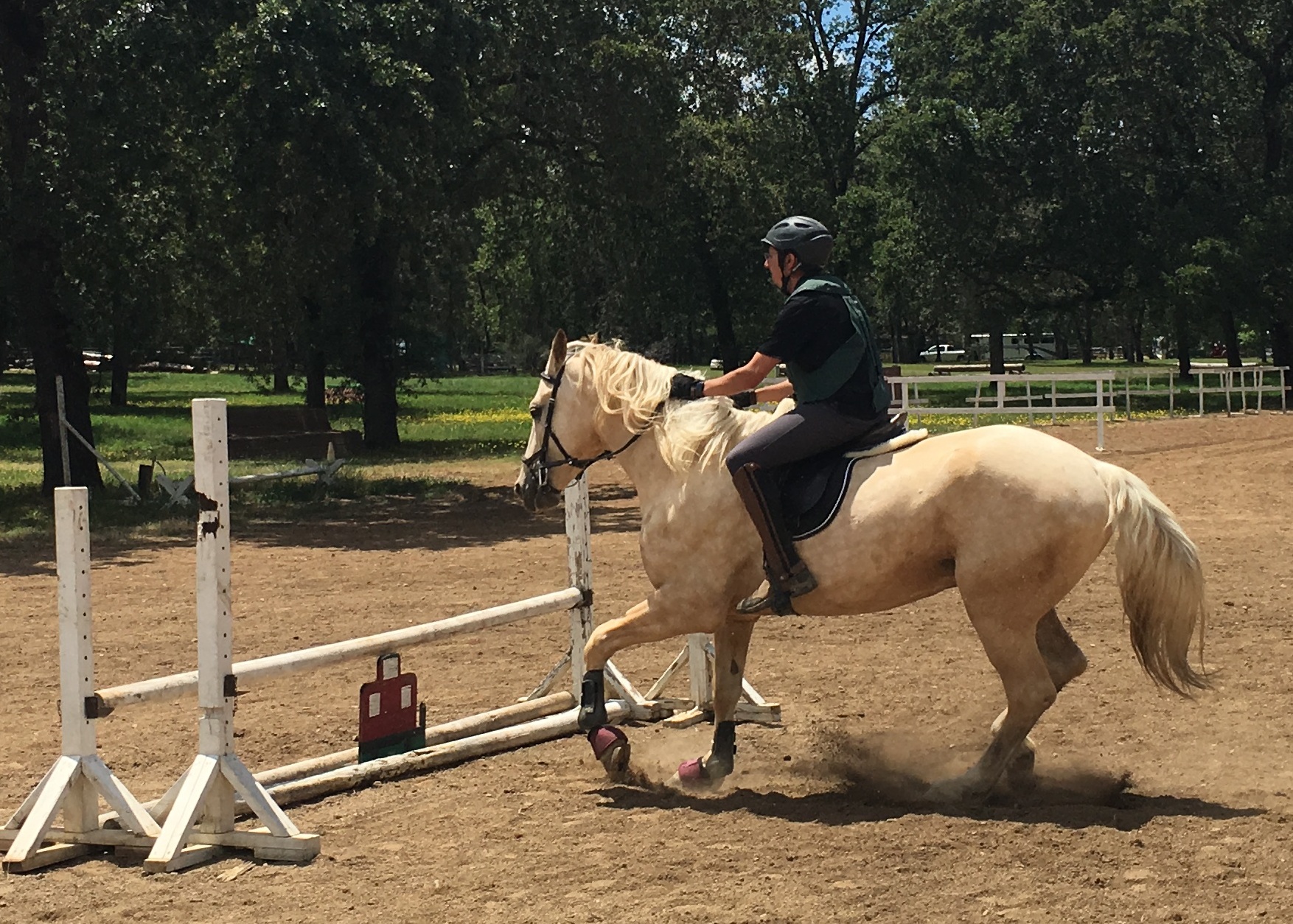 They came back around, he tried to stop again and Alexis was like, he’s just making more work for himself. So around again and this time the nailed it. 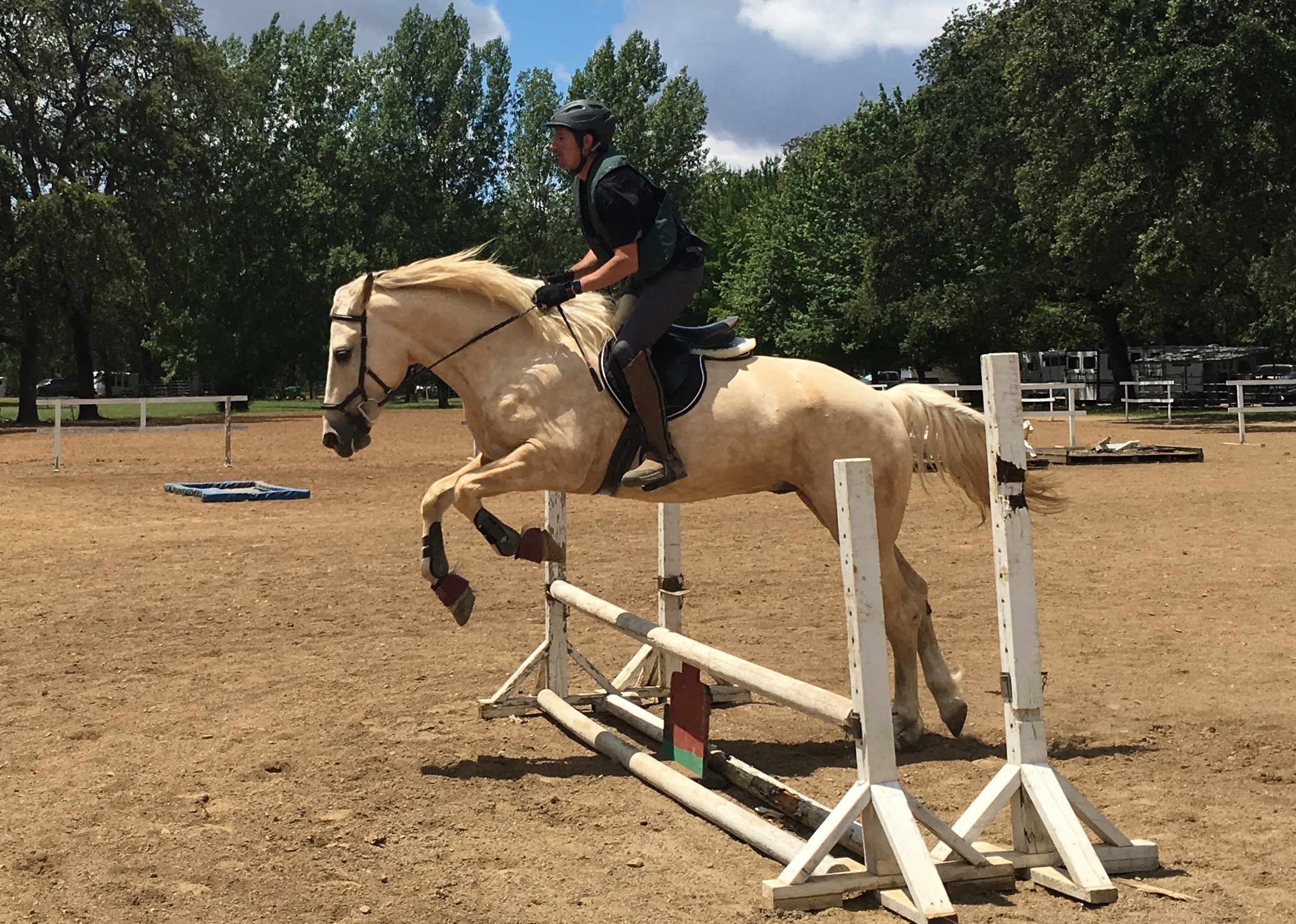 And with that, Levi was finally allowed to be done. He definitely deserved the break. Although I know it wasn’t as much fun as having Eugene would have been, my husband did have a good time with Levi. He far and away exceeded both of our expectations for what weekend. I would never have though he’d do as much jumping as he did and especially not at the heights he did on XC. While he still needs time and practice learning how to use his feet, I’m looking forward to the future with him. 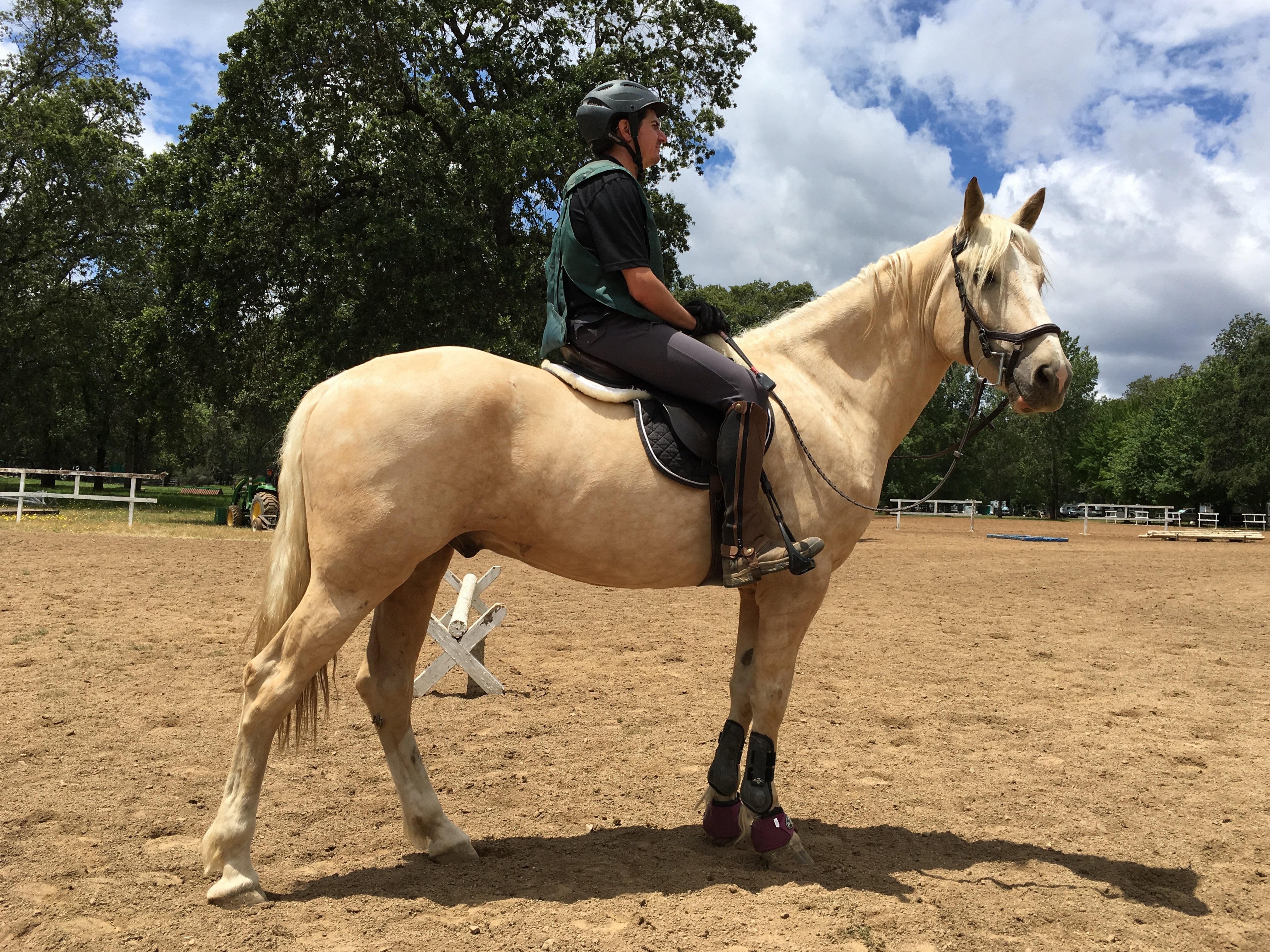