I was supposed to go to an eventing derby on Sunday, but it was pouring rain and I really didn’t feel like driving 5 hours round trip to ride in the rain (Jumping was indoors, but dressage was outside). So that didn’t get done.

We did however, get something done this weekend. We drove 6 hours on Saturday to pick up a new trailer. We went to 4 different dealerships and checked out all of the 3 horse slant-load bumper pulls. We finally settled on a cheap Trails West Adventure MX. It’s main selling features were that it’s: short, fully enclosed, and cheap. 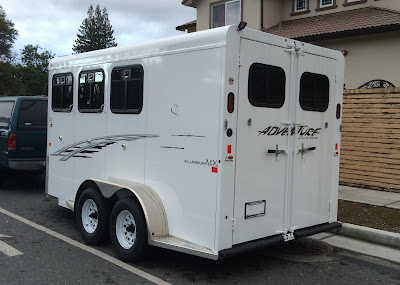 Short
Our truck can handle a lot of weight so we weren’t terribly concerned about that but the extra length of a 3 horse was a consideration. Our truck is the extra long bed and it’s hard to maneuver even our two-horse trailer in tight places. If our arena is closed for rain, we have to turn around in a pretty narrow spot and as it is now, we have to drive the truck a bit off the road to make the k-turn. With a longer trailer we’d be screwed for that as any further off the road is a drop off. We also want to be able to go to places like Henry Coe, where trailers over a certain length aren’t allowed up to the campsite. This trailer is actually the same length as our 2 horse.

Enclosed
We did look at a few open trailers that can be sealed off with plexiglass when you’re not using them, but I’d much rather be able to just open and shut a window. Especially since we do a lot of riding in the rainy season so we can’t just close it up for winter.

Cheap
We didn’t want to spend a fortune on a new trailer. Even though we plan to sell our two horse, everything extra comes out of our house savings fund. There was only 1 used trailer that we looked at and it seemed fine, but it did have a bit of surface rust. It also wasn’t very cheap for being used. So it just didn’t seem worth the possible issues that could arise. There was another trailer we really liked, but it would have been 3k more than this one. It was a nicer trailer, but I just really didn’t feel like spending that much.

All of the trailers in this model at this dealership had swing-out saddle racks installed. They’re actually an upgrade and I always see them listed as an advantage, but I really dislike them. They sit right in the doorway and make it more difficult to get things in and out. Since we sleep in our truck bed, we need to be able to get bales of hay into the tack room when camping. And even when we’re not camping, I don’t like having to clamber around saddles to get in and out.

We arrived at the dealership 45 minutes before closing and asked them to get the saddle rack switched to a stationary rack on the back wall and to remove the spare from that spot (we’re going to have it mounted outside to gain even more room). We also had them install pads on the dividers and feed bins. They were hustling to get it done. My husband took the truck around to get it hitched up and I stayed in the lobby reading. Eventually I wandered out to see how the work was going and they had installed a 2 saddle rack instead of a 3. There’s 3 guys working on the trailer plus my husband standing around and no one has noticed except me. So I grab out sales guy who’s as baffled as I am at how they all missed this. It turns out they don’t have a 3 saddle rack in stock, so they ended up giving us a second saddle rack to take to our trailer guys and have them cut it down and install it. 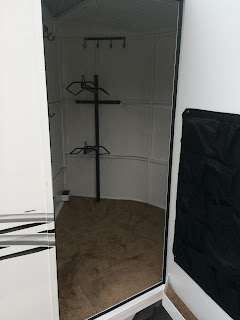 I am impressed with how (relatively) big the tack room is with the saddle rack moved out of the way and the spare out. There’s even a water tank already installed in the corner to the left of the door. And there’s a skylight in the ceiling, which is great as our truck will not power the trailer unless it’s running. This way there’s some light for changing.

The trailer still needs to go in to our trailer guys to have the anti-sway bars installed, have the saddle rack fixed, and get the spare mounted. We’ll also need to get our Hi-Ties transferred over from our old trailer. We want to change out the carpet in the tack room as it’s currently done with shitty indoor carpeting. We’re going to buy some cheap outdoor carpeting and do that ourselves.

We’re also going to remove the one divider to make it into a 2 horse trailer. We can always put it back in if we’re going to take three, but this way each horse has an extra wide spot. And this way Nilla can have what is practically a box stall to herself if necessary.

Alas, not as fun as a derby, but it did need to get done. I hope everyone else’s weekend was more fun.

16 thoughts on “At Least Something Got Done This Weekend”