As I was leaving for the barn in the morning my husband cautioned me to be careful with the baby Mustangs. Levi might be 8 now, but he’s still mentally a baby and Devro is a baby in all fashions. The last time either Levi or Devro had been to the beach, neither of them had been huge fans of it and they had each been accompanied by Eugene who loves the beach and is a fantasticly confident babysitter. Two baby Mustangs with only each other to look to sounded like a potential recipe for disaster.

To make it even more challenging, we decided to try a new beach. We usually go to Moss Landing, and it’s nice, but I really wanted to try Poplar Beach in Half Moon Bay. Getting to Half Moon Bay can be a giant PITA most of the year due to traffic which can back up for miles and make a trip that should be 45 minutes take 2+ hours. I avoid Half Moon Bay even in a car, let alone when towing a horse trailer. Luckily, this time of year is fairly safe and we only got backed up a bit on the trip.

Luckily the beach has a nice, big trailer parking area and it was empty so we were able to park easily. Devro needed to walk around for a bit to calm down and I walked Levi with him because Levi doesn’t care about parking lots and people and such, but dear Cod, his new best friend can’t walk 20 feet away without him or he might just die.

We tacked up and hand walked them down the steep pathway to the beach. They were both full of nervous energy and snorting. I was worried about either running some poor person or dog over or Levi tripping on his feet and face planting down the path. 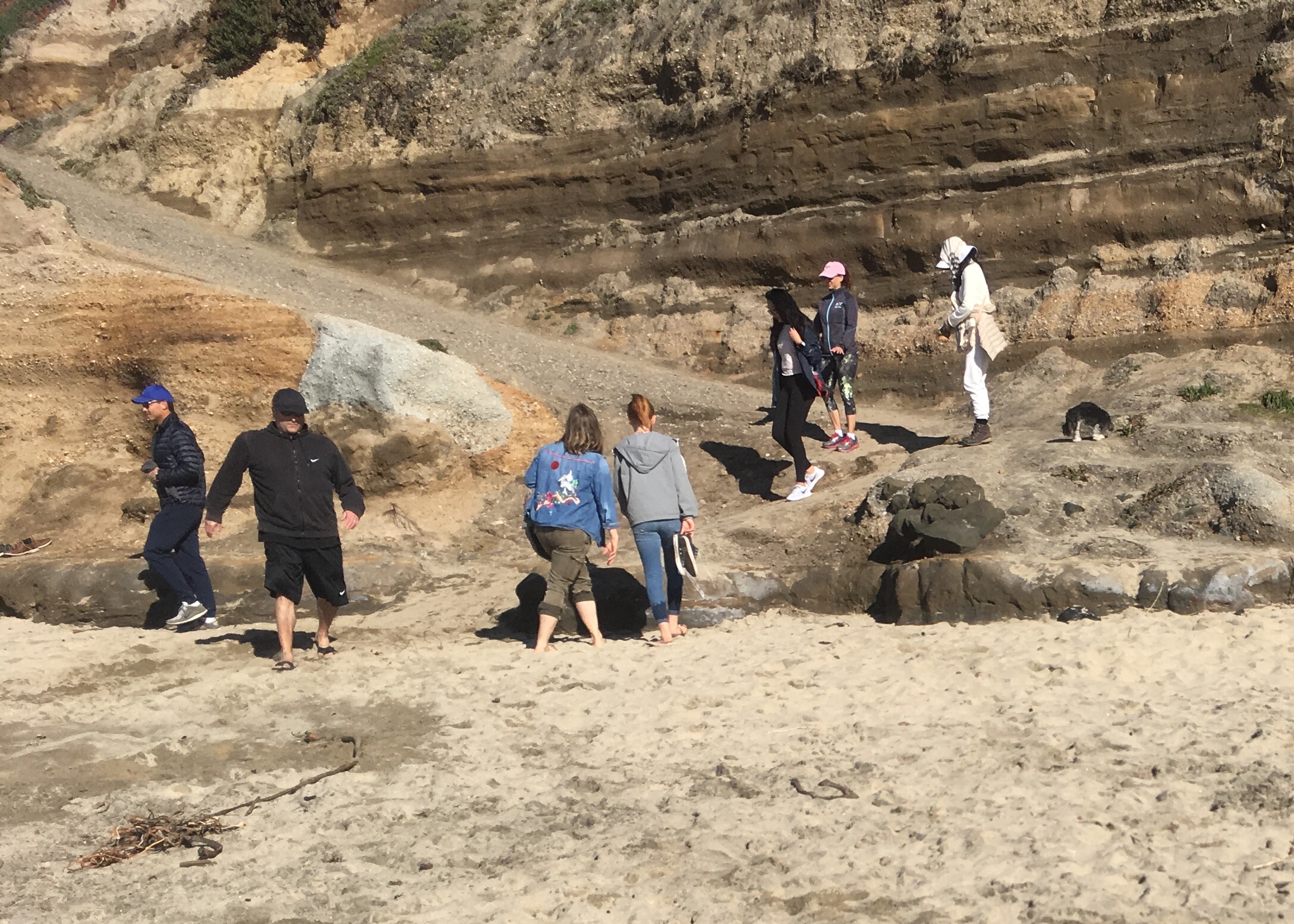 We handwalked them down towards the water, but they weren’t touching it. We gave up and hopped on using the rocks by the cliffs. Then we started heading down the beach and the two of them proceeded to compete for who could be furthest from the water. It’s not really a fun game and there’s no way to have two winners. I got no pictures of the first half of our ride because I was just trying to stay on and not run over anyone.

In addition to not wanting to get anywhere near the water, Levi decided that all lines in the ground were impossible to cross. Slight line from a wave that passed hours ago? Better slam on the breaks and try to spin around backwards. “Line” created by some person walking along the beach and dragging their feet a bit? Definitely a trap.

I eventually managed to trick him into moving towards the water by leg yielding him slowly and persistently away from the cliffs. We couldn’t get within touching distance of the water, but we were at least in slightly harder-packed footing. The tide was really low that day so we rode down to some exposed rocks to check them out before turning around. We didn’t want to do a very long ride because of Devro’s youth and the heat had both the boys sweating quite a bit. 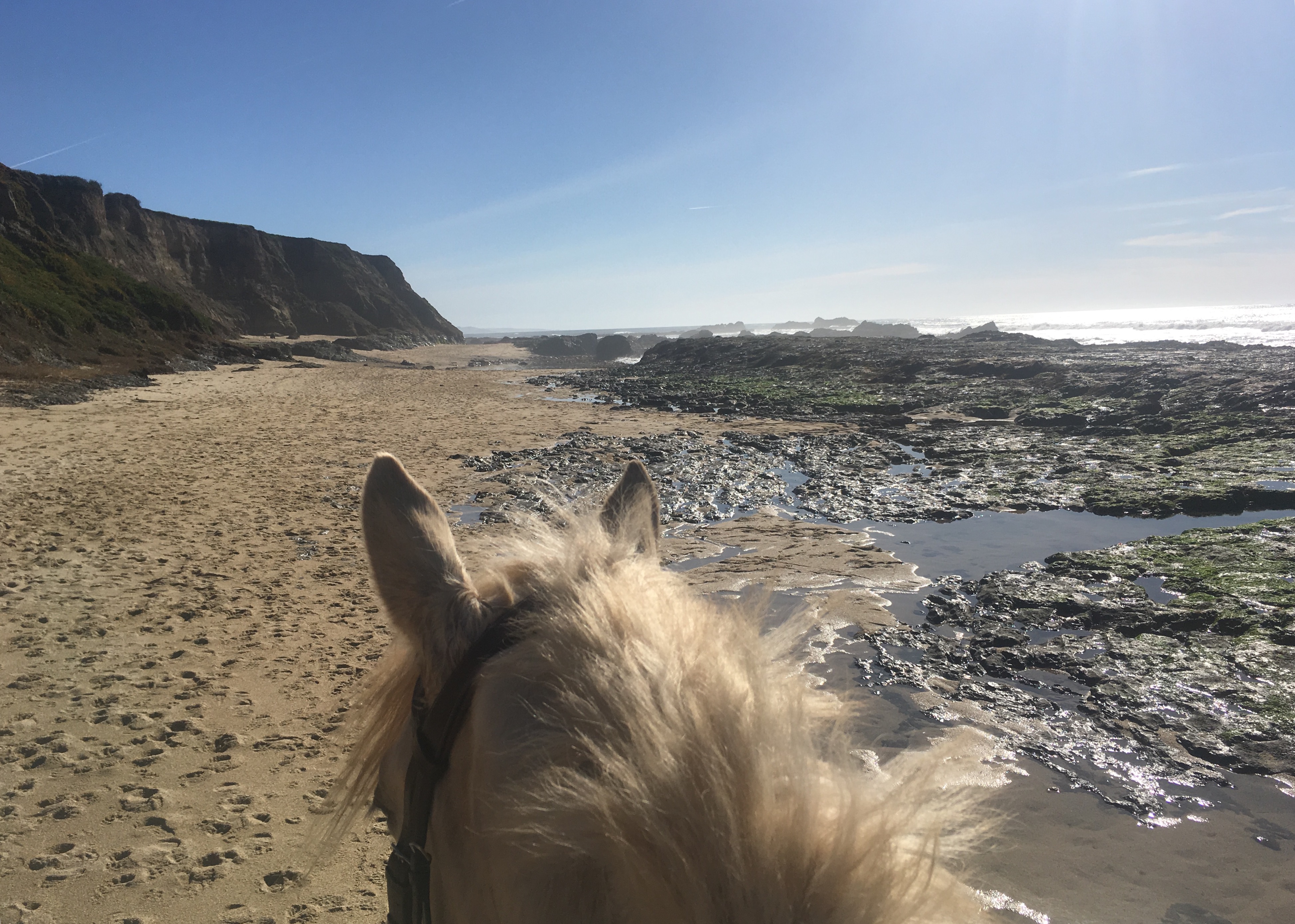 What makes this beach really different from Moss Landing is the gorgeous cliffs alongside the beach. For a Philly girl who grew up going to the Jersey Shore or the islands off of North Carolina, I’m fascinated by just how different the coastline is here in California. I love the steep cliffs with greenery hanging off. I wish I’d taken more pictures. 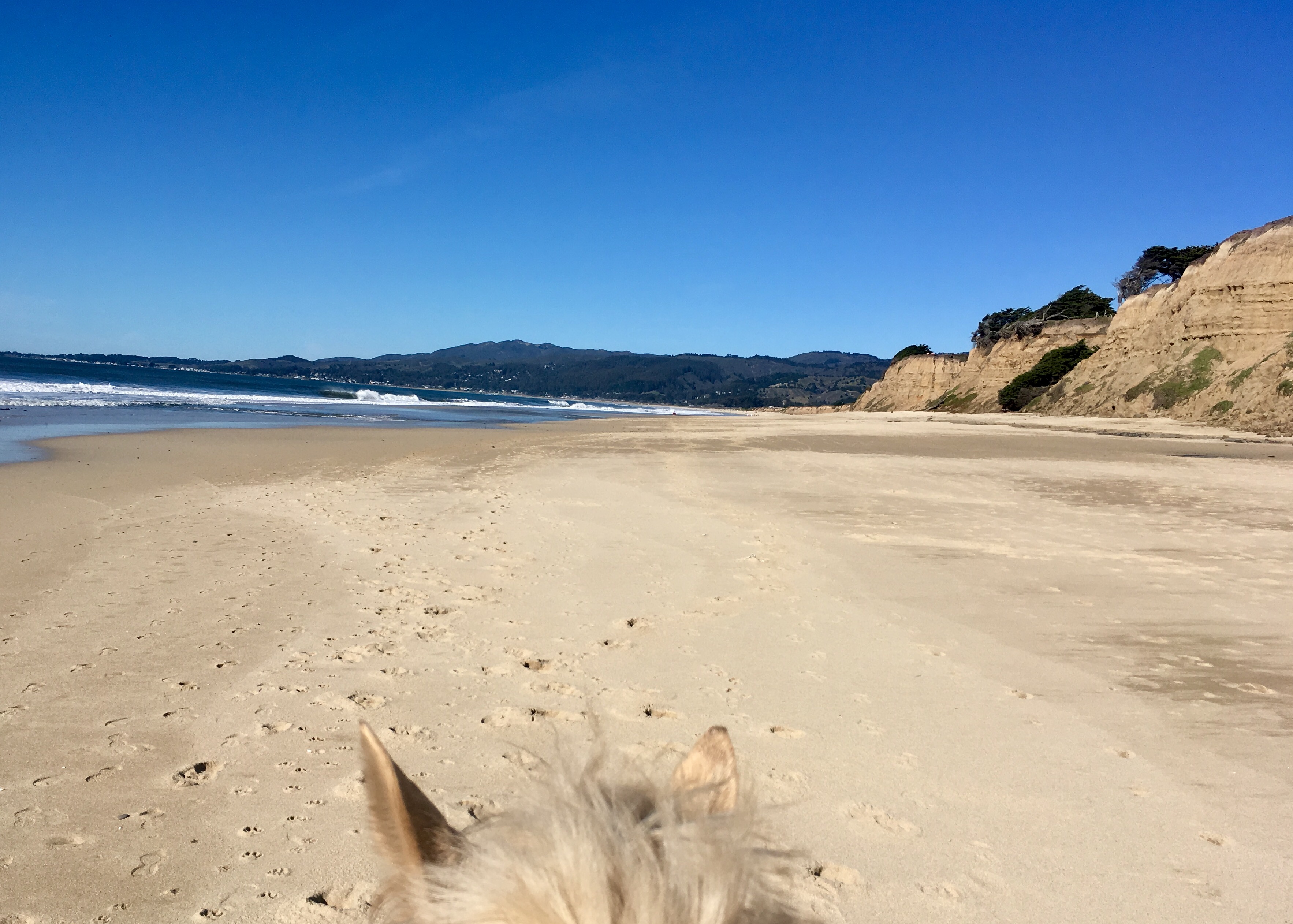 The return ride was much more relaxed and we got closer to the water. At one point I even leg yielded Levi into wet sand, but the second his hoof splashed on the ground, he jumped sideways snorting. 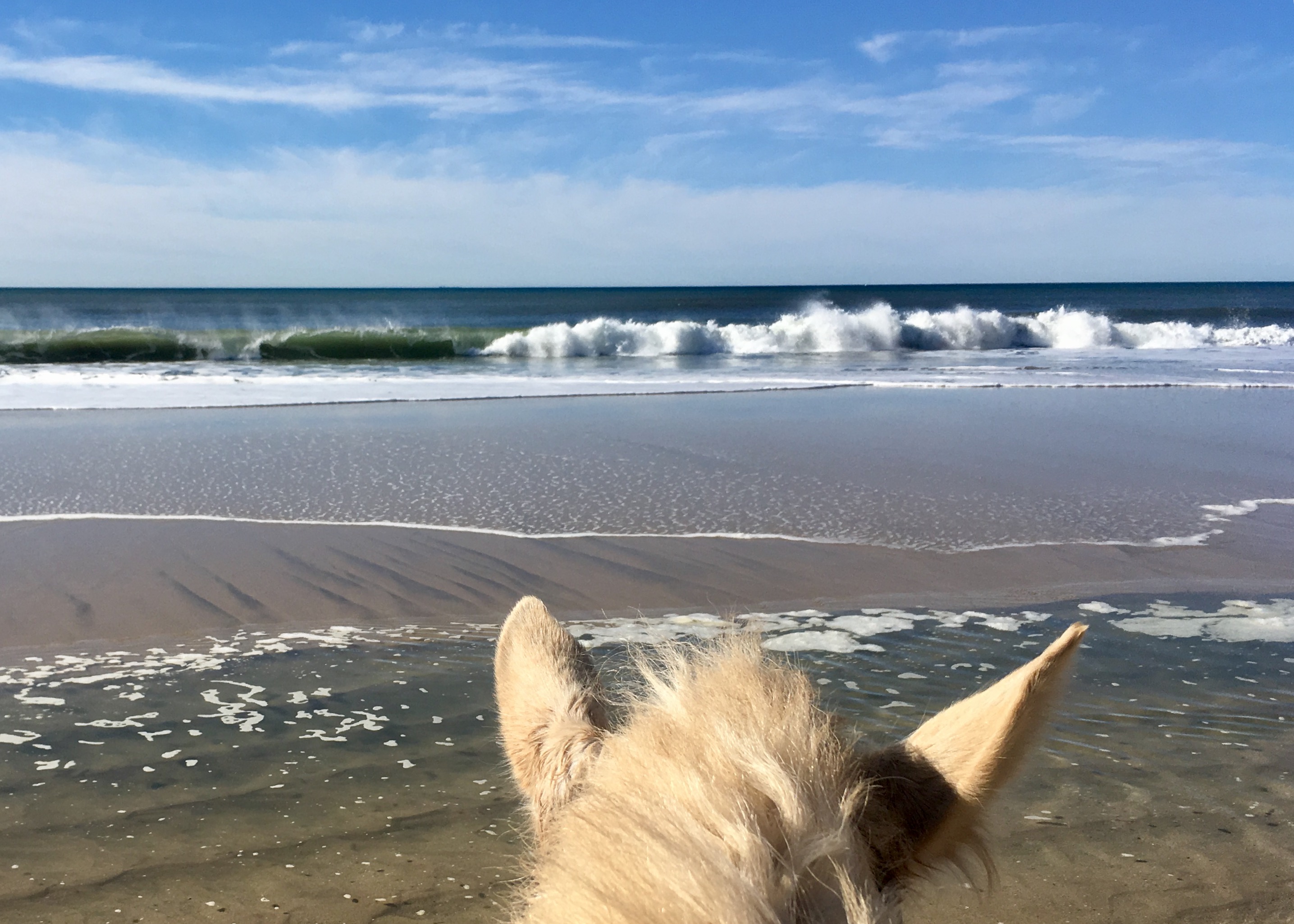 We only got close to the above water because the sand bar kept the waves from coming near him and the tide pool water was still. 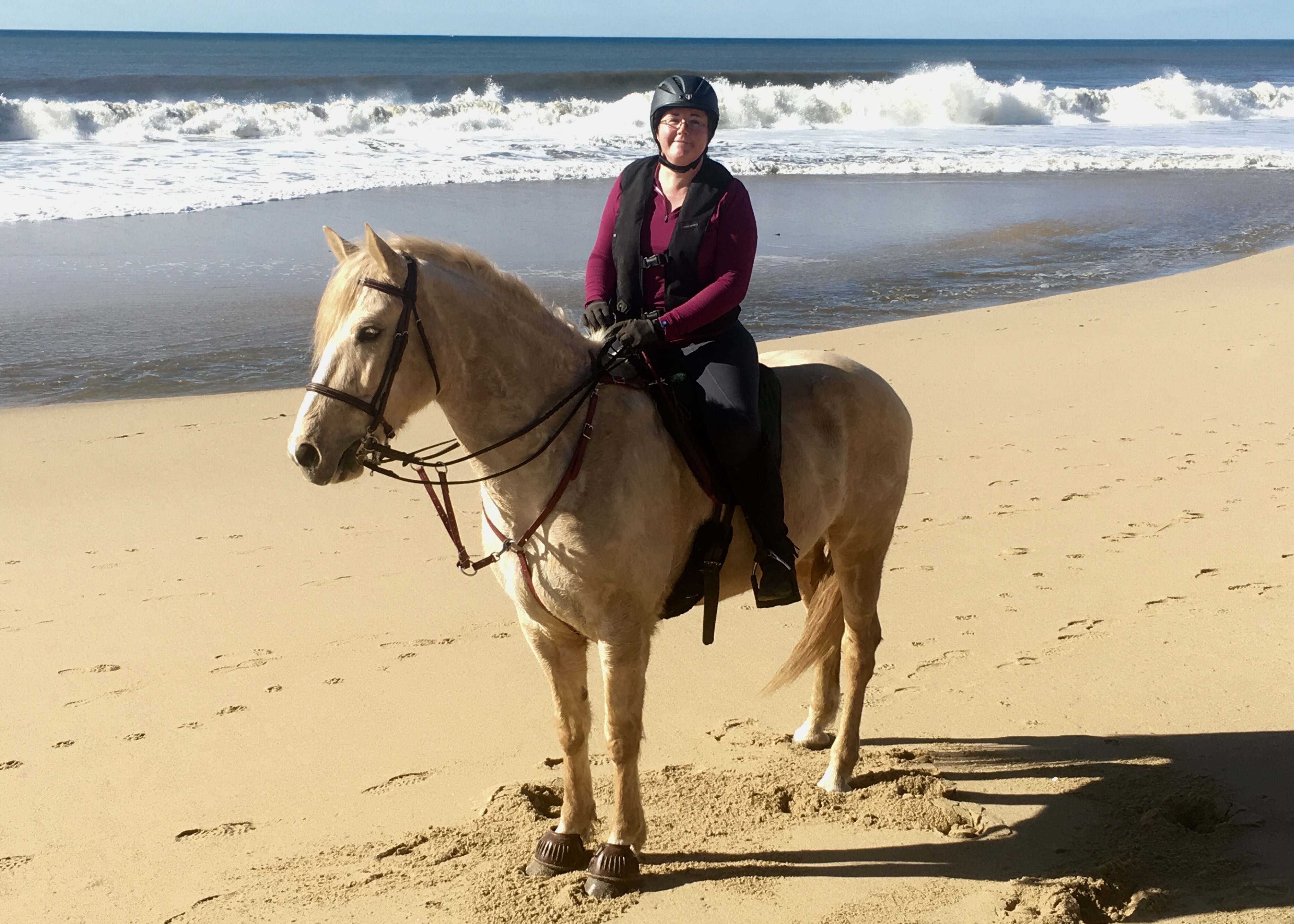 Devro was being quite a good boy for a baby Mustang. He was just as on edge as Levi, but he actually has the excuse of age and inexperience. Poor boy is also very, very fluffy this time of year and built up quite a sweat. 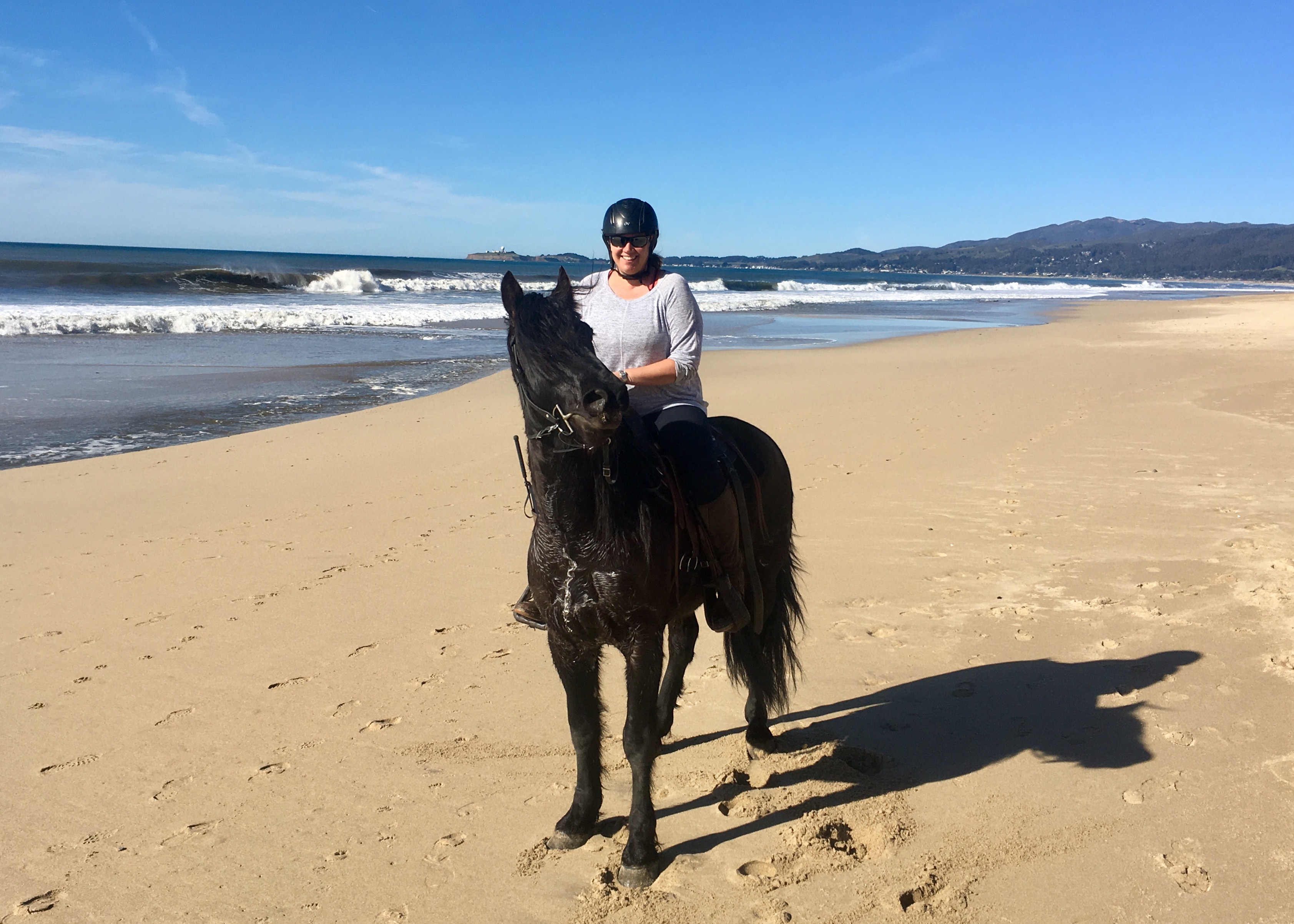 Once we got back to the trailer, we stripped their tack and took them back to the beach for a roll. Levi might hate being ridden on the beach, but he loves going to the beach. It’s the best place for rolling. We actually barely made it off the path before he hurled himself to the ground. 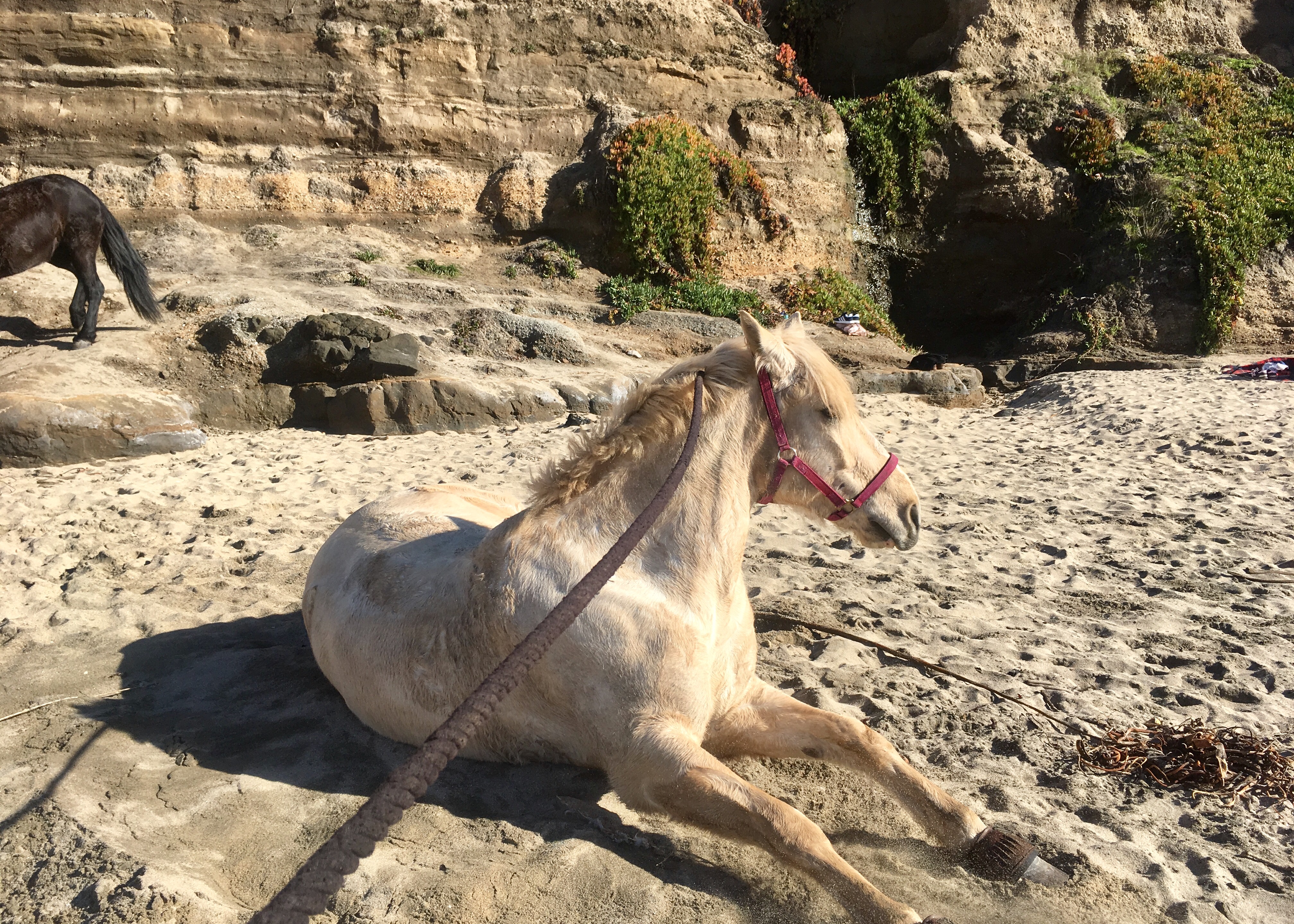 Levi was so excited to roll in the sand, he kept getting rolling, getting up, moving a few feet, rolling again, and repeated the process at least 10 times. 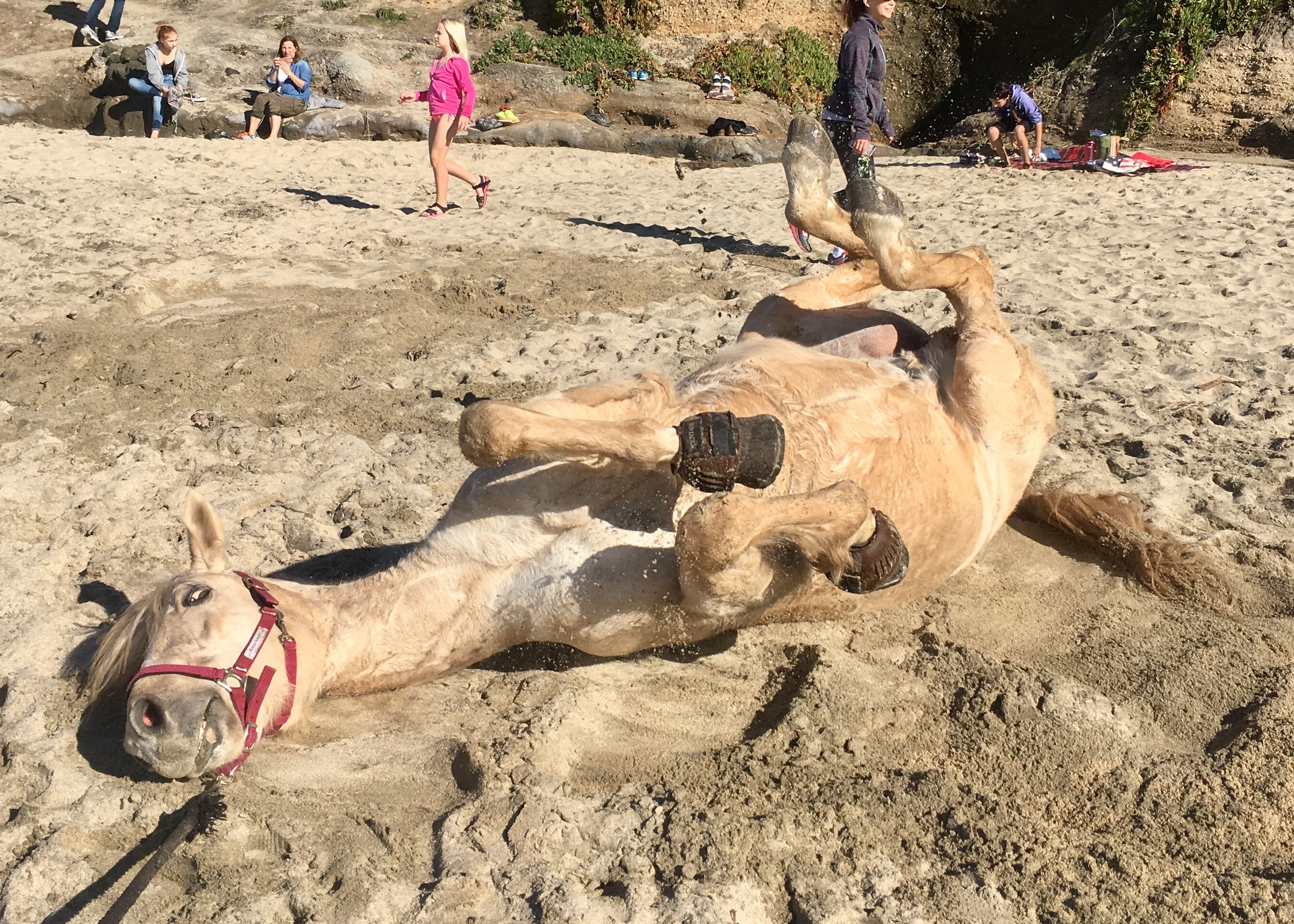 Because we were right at the entrance, there were tons of people around and a lot of them stopped to watch and take pictures of the Levi rolling. He’s such a goofball and so clearly enjoying himself that even non equestrians can tell he’s happy. In addition to rolling, he likes to flop in the sand and swing his legs and head through it like he’s trying to make sand angels. 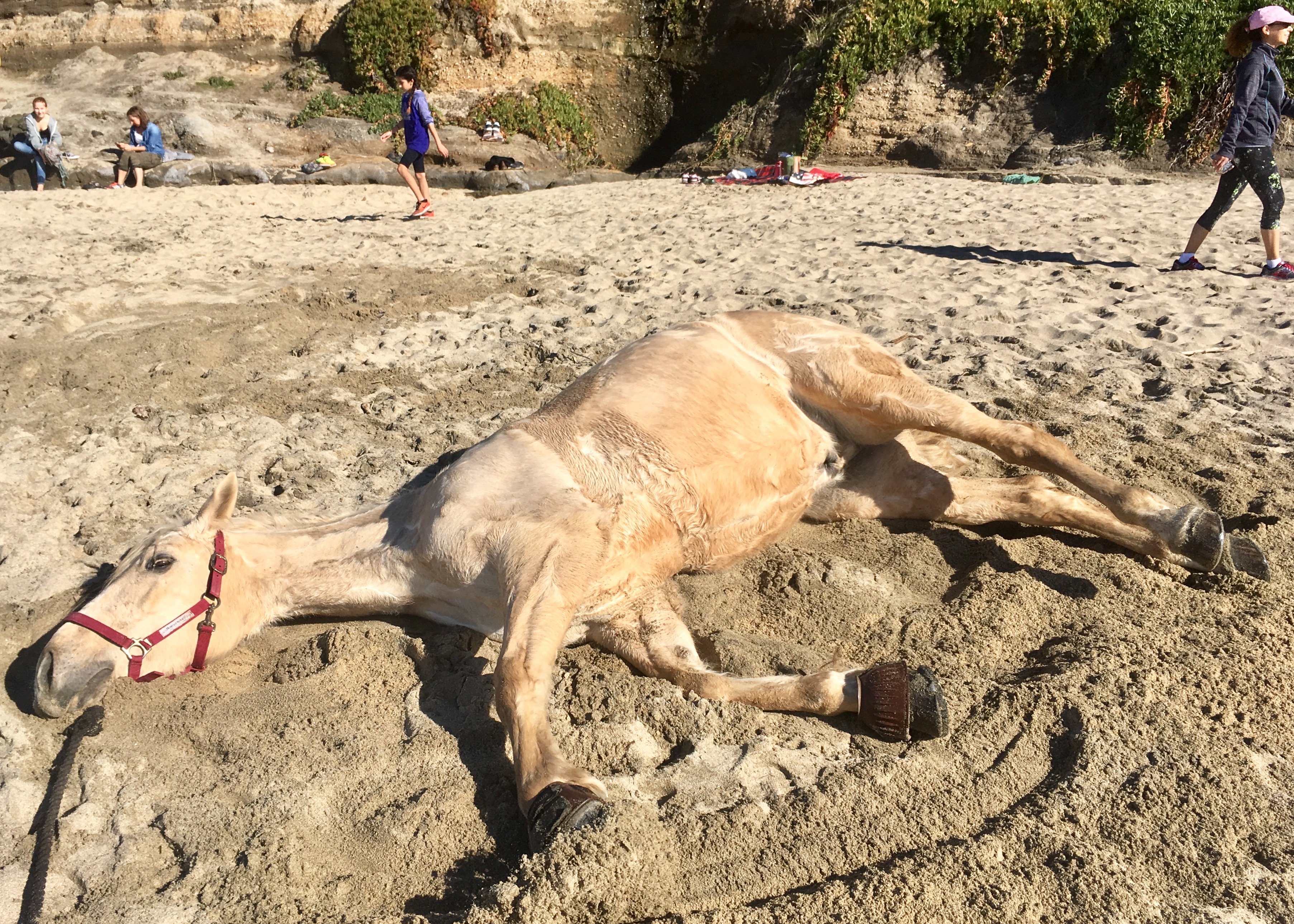 After he finished all of his rolling, we had a bunch of kids and adults come up to pet him and ask questions. By this point, he was relaxed and unconcerned. The waves are terrifying, but loose barking dogs, kids screaming and running with toys, beach umbrellas, and all the normal things a horse might care about don’t concern him at all. He was happy to be pet and admired. Devro felt too unsettled to roll, though he did let some kids pet him. 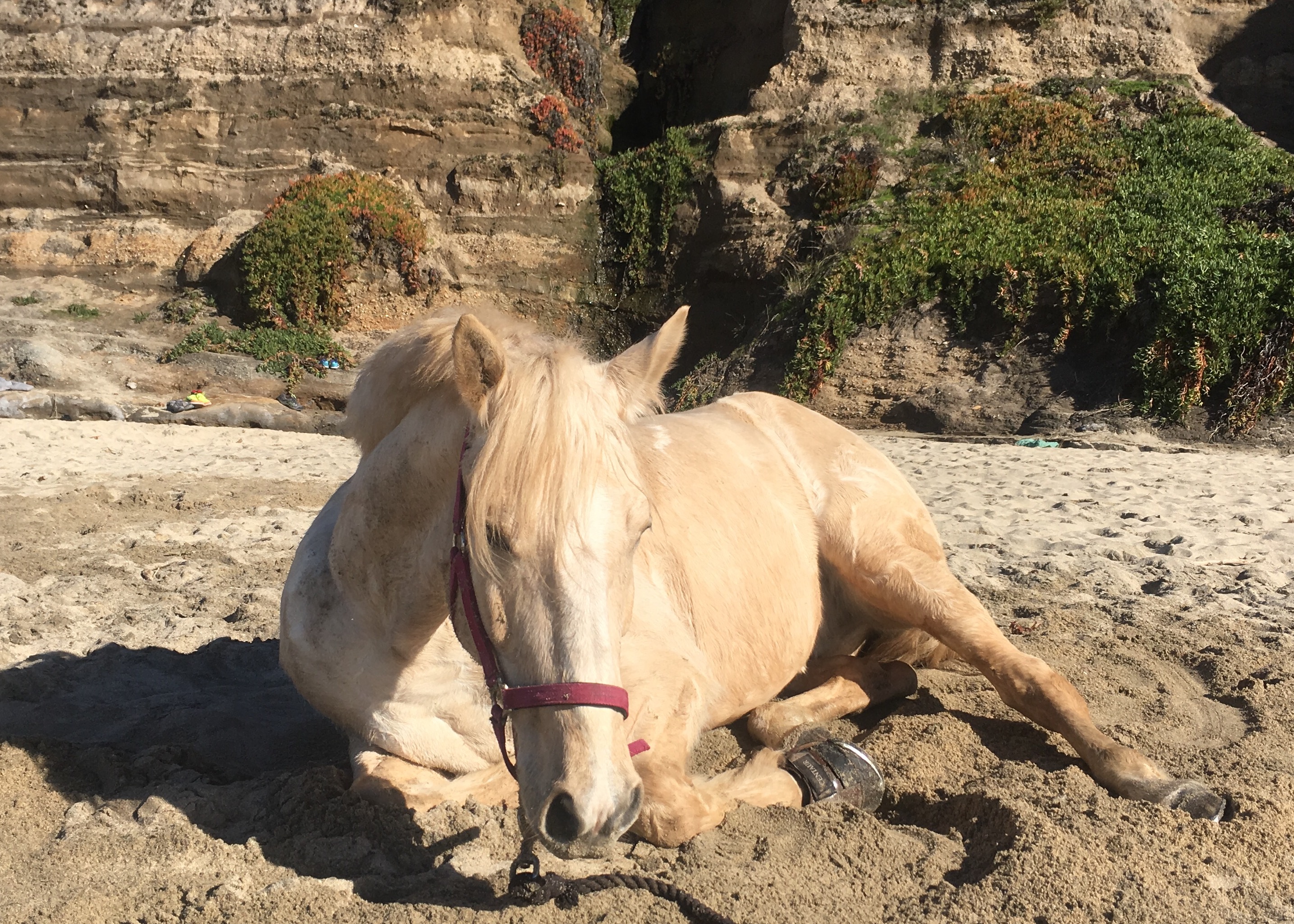 Although the ride wasn’t very long, it was an excellent way to spend the day. The weather was gorgeous and the scenery stunning. I’m already planning to go back with my husband once we get our truck fixed.