Sometimes when I’m bored or looking for a project, I’ll browse Pinterest. Sometimes I find recipes and crafts for the house. Occasionally I’m inspired by a cool looking horse project. I also post my own DIY projects on Pinterest. But as with everything, you take the good with the bad. And Pinterest has a lot of BAD ideas. 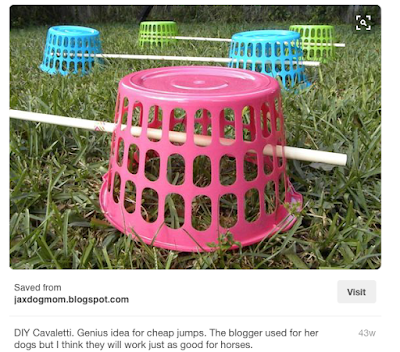 This is actually a DIY for dog agility, so that blogger isn’t at fault, but the person pinning it thinks it’d be great for horse jumps. I think that would be an excellent way to kill yourself when your horse inevitably trips, sends a basket flying, spooks or gets a foot stuck in the basket and then loses their minds and takes off breaking things including themselves or you.

I think we’ve probably all seen this terrible idea going around the interwebs a few months ago: 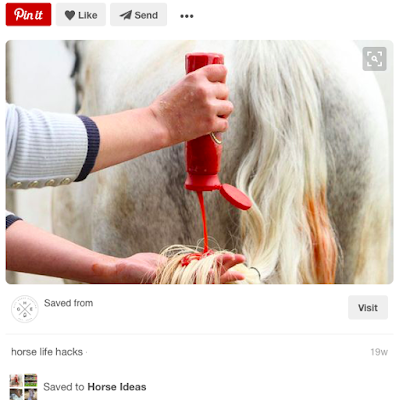 Horse Nation did a good breakdown on the various ways this is a bad idea so I won’t spend too much time on this. How has this been pinned 380 times? Do that many people want to inure themselves?

The next one isn’t terrible, I just don’t think it’ll work. And I have seen this one pinned so many times: 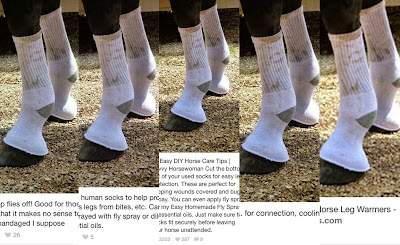 It’s always the exact same image being re-used on multiple different sites. Why? Because I bet this doesn’t work at all. If it worked, there’d be lots of different pictures. The second the horse moves, you know the sock is going to bunch up and down. I have heard of some people using diabetic/compression socks on their horses as an alternative to Equiflexsleeves, but they’re a) not using regular socks and b) not pretending the socks will stay down on the coronet like that.