You know what’s fun? Trying to do wound care at a barn without electricity when the sun sets at 6:15. And trying to cut off a bandage with shitty scissors by yourself because your husband is stuck at work and without the ace you planned on using because you forgot the keys to the trailer. 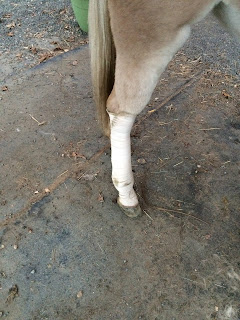 I had to cut each layer of bandage off separately.

I distracted Nilla with her grain and she was surprisingly good about this whole procedure. The revealed wounds didn’t look too bad. 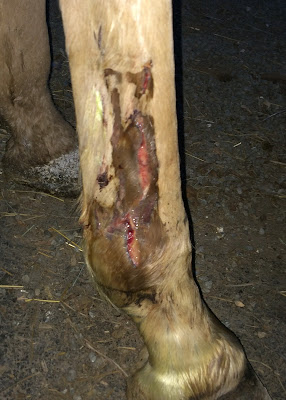 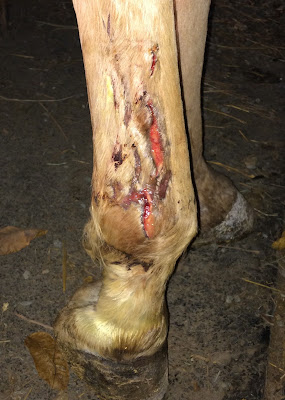 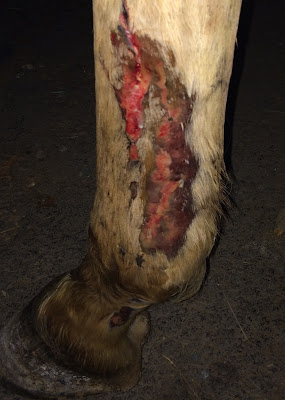 I had to move my car and aim the headlights at her legs just to see what I was doing by this point.

The whole leg got coated in Aluspray. Then I took her to roll in the sand arena. She loves rolling and I knew she’d roll now that the wrap was off. Since she also got access to her paddock again, I figured it would be better to let her roll in the soft sand rather than have her roll in a gravel paddock. Thankfully, she’ll roll on a lead rope so I didn’t have to let her go and risk her going bucking off afterwards. I put one of Dijon’s hind boots on really loose, just to keep the sand out and she objected violently to that so I cannot imagine that I’d ever have been able to re-wrap her leg if we’d done the stitches.

She enjoyed her roll and then I sprayed some more alb-spray on and put her in her stall with the paddock door open. She was happy to wander her paddock before going back to her hay. Then I wandered around in the dark trying to put everything away and feed the other two. The full moon would have been helpful, but it was trapped behind rain clouds so I couldn’t see without a flashlight. I should have brought a headlamp.

7 thoughts on “Bandage Off”