Luckily our time for cross country the next morning was early so we could avoid some of the heat. I was still dying though. I’m just not cut out for heat. Or cold really. I need perfect weather all the time. It’s kinda why we live in Cali; it’s supposed to be nice here. Ugh.

I have helmet cams from the first 80-90% of the clinic if you want to watch. They’re trimmed to cut out the in between parts so they’re pretty short (3-4 minutes each).

We started off a quick discussion of goals. My husband wanted to get some good practice before his first rated event and wanted to school water, banks, and ditches. I wanted to figure out a way to get Nilla to jump without slamming to a stop right before the jump and then hurling herself over from an almost standstill. Then we got them warmed up and started with a little intro table/bench sort of jump. Trot, canter, all good. Bobby asked if we wanted to hit more jumps first or head straight to banks. We were fine with banks so we rode up to the bank complex.

He first had us walk up a little BN bank, then walk down. Trot up, walk down, trot up, trot down, then canter up trot down. The bank was built so you could go up and then off to the side, turn around and come back down or go a few strides and hop down the other side. Once we were cantering up the first, he had us go up then down to a trot for the 2nd bank.

Once we had mastered the little bank, he pointed us at a much bigger bank. He asked me if I was comfortable doing it and I said sure. Nilla loves banks. She jumps up and down them even when she’s not supposed to. I just did the up bank, but my husband schooled the up and down. One of the big takeaways was lowering your hands right before they jump down the bank. If you keep pressure on the reins, they leap out, lower the reins and they jump down. Eugene aced it.

They had two little water complexes next to each other. The second one was much more closed in by trees so we moved over to that one after getting started in the open one. Same pattern to start and then we began adding jumps.

Through the water and out a few strides to a BN coop. And this is where Nilla revealed her true self. We had a nice pace through the water, she got to the jump, slowed down, buried herself to the base and then coon-jumped it. I think my exact words were: “and that’s how this goes.” We went over to talk to Bobby. I explained that I have my leg on. I can smack her with the crop, but that doesn’t produce anything good.

And this is the best part. Bobby got it. He agreed I wasn’t causing the problem (which is always nice to hear). He thought about it for a moment, then had us come back and hold her back. Which sounds wrong. If she’s backing off, why encourage that? But his thought was that she wanted to peek at the jump so if I slowed her down, she could look at it from a distance and then not need to once she got right up to it.

We went back around and I pulled her down to a trot in the water, then let her go just as we left the water so she could move up to the canter and take the jump. And she did. Instead of slowing down, she moved forward to the jump. It was a still a little awkward so he had us come around again and have me really slow her down. His words were: “slower than you think you should be going.” Then just soften and allow her to move forward to the jump.

OMG. He fixed her. Did we hit the exact right spot every single time? No. Did she stall want to be close down at the base? Sure. But she was jumping out of stride instead of slamming on the breaks and deer hopping over.

No big deal: Bobby’s just solving all of our cross country issues in one clinic. #mulesofinstagram #eventingmule #eventing #horseblog

I’m still kind of in shock. He saw her go, figured out the problem, and solved it. In minutes. I mean, I know he’s a professional, but I’ve never had anyone even figure out how that mule’s mind work that quickly let alone solve it.

Meanwhile, my husband and Eugene were schooling various lines in the water. They did the same coop that Nilla and did to start then moved on to doing a coop with cutouts. The first time around, they didn’t line up well and came into the jump far to the one side, then circled around and came back to the same side from the other direction. Bobby lectured them on getting lined up to the middle. This jump had trees/brush on the one side too, so he said it would be even better to aim for that side so if they horse is looky, they’re not going to run out that way. 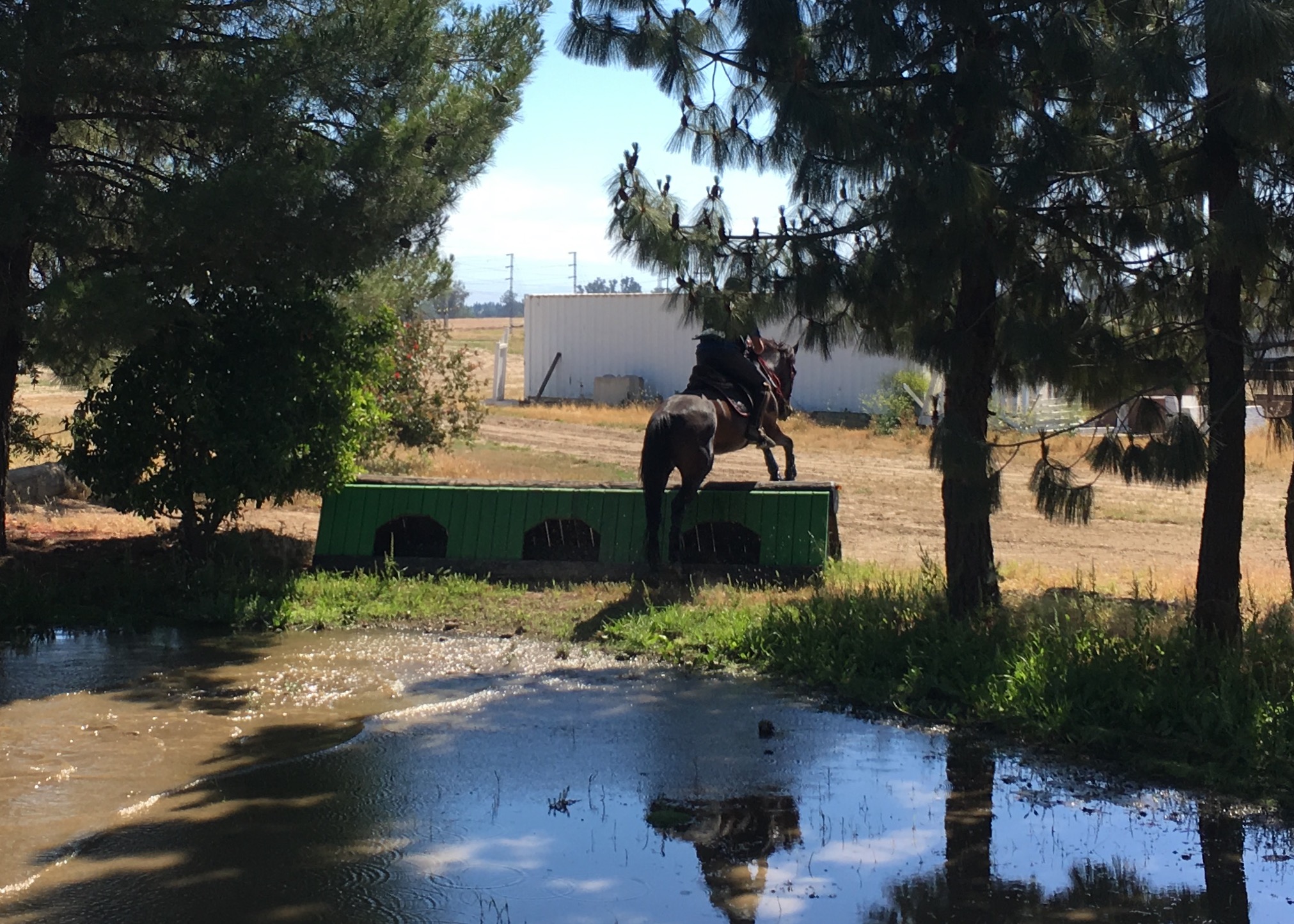 They did it again and got it much more lined up.

Then Bobby had them do that coop with a bending line around to a novice coop on the other side of the water. The first time they did a curve through the water and hit the second jump while still turning. I don’t quite know how we lucked out with this horse, but he really tolerates a lot.

With some instruction, they finally managed to get a nice straight line, turn and straight line to the second jump. Once they had that set, we headed over to practice jumps on hills. We started with a little intro cabin which was on a hill both perpendicular and parallel to the jump so it was a good opportunity to work on terrain issues.

Nilla was excellent. Which is extra amazing because she’s normally terrible at downhill jumps. You can see a few of our attempts if you watch my husband’s helmet cam video at 3:15.

Eugene is great at terrain though so they rocked it easily. Bobby then had them school a line through the large water at this end of the course. Eugene loves water; it’s his happy place.

Bobby did get after my husband about letting Eugene lose power in the water. He needs to maintain power and not let Eugene peter out in the water.

Nilla and I schooled a small log stack near the water complex. Nilla was getting a bit tired and now just trotting the jumps instead of breaking into canter as soon as I stopped holding her back. Bobby said I could now ask a bit instead of just softening and that worked. She just hopped over without stopping. 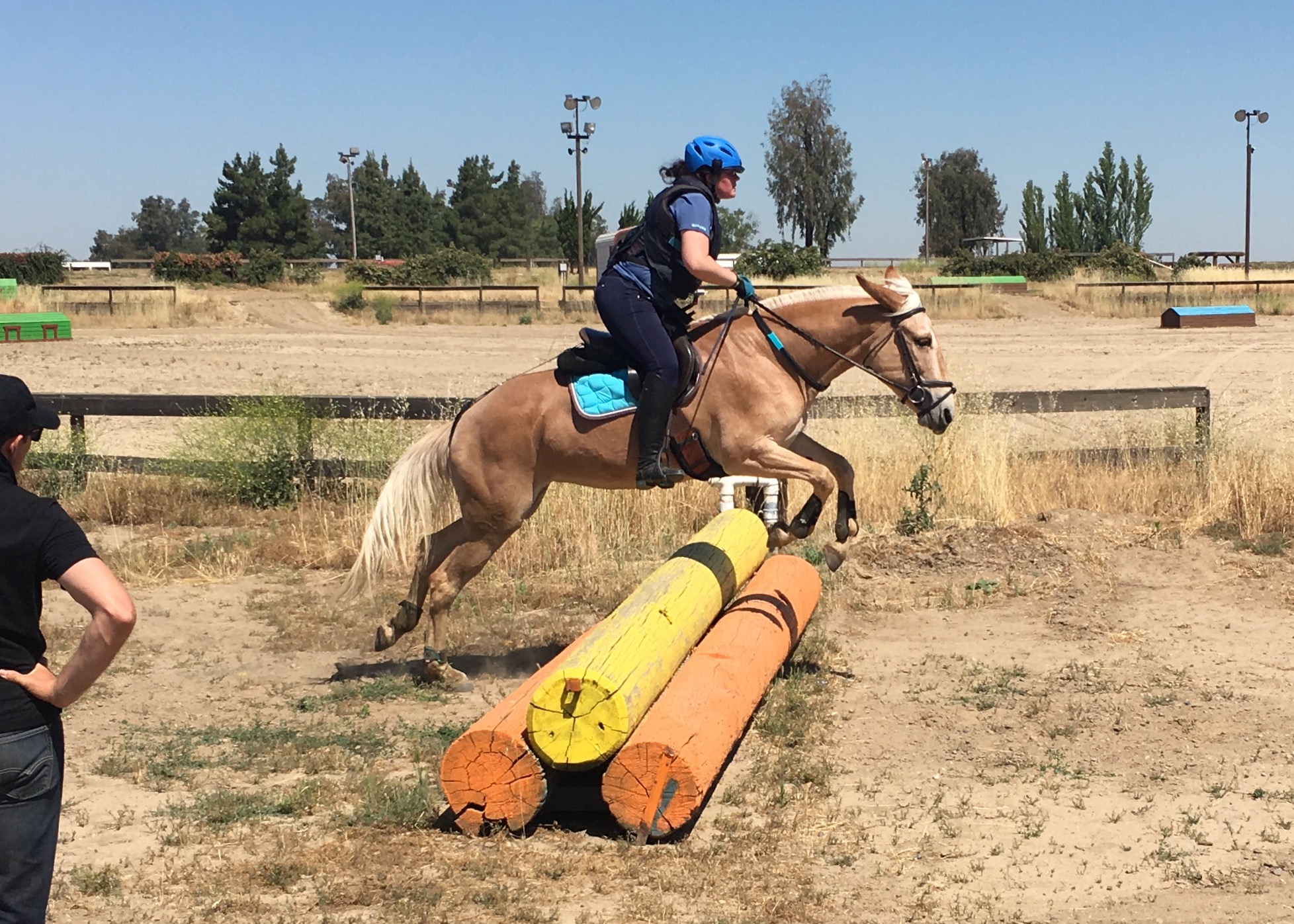 We did the same at a little rolltop/cabin jump and Bobby asked if I wanted to be done. I said I wanted to do something bigger just to make sure this method wasn’t only working with the smaller jumps. We decided to hit up the BN jump back where we had started.

But first Bobby had my husband and Eugene school a pretty challenging hill combination. (This is also where our cameras ran out of memory if you’re wondering why it’s not in the videos.) The first jump was in the arena and the second one was up a hill out of the arena.

The first jump was fine and the second jump going up hill was the same. Then Bobby had them turn around and come down the same combination. I would have noped right out of that. But Eugene is really fantastic about terrain. This horse flies down hills on endurance and trail rides. I think those years spent living in the wild really taught him how to manage his feet (a skill Levi is completely lacking). So he just cantered nicely down the steep incline, popped over the jump and carried on to the second one like no big deal. I’m so sad I got no media of that jump.

We returned to where we had started to practice do end with a higher jump for Nilla. Even though she was a bit tired (it was 100 degrees out and she’s not used to jumping this much) she was great. Just moved right up and bounced on over.

As I mentioned in my previous post, Bobby is a fantastic clinician. He was likeable and fun, but didn’t let you get away with doing things wrong either. I really liked how he honed in on what we needed and modified the lessons for each of us. My husband really enjoyed the clinic as well. We couldn’t stop talking about how happy we were that we had this opportunity. I would definitely ride with him again if he ever comes back to CA and I would absolutely recommend him. If you have an opportunity to ride with him, do so.