After Dressage I had Cross Country at 2:55. This is the first time I’ve done an event where the phases were actually in the correct order. They were short jump judge volunteers so my husband ended up volunteering and I was going to be on my own for getting ready. We decided to walk the course early in the morning before it got insanely hot. 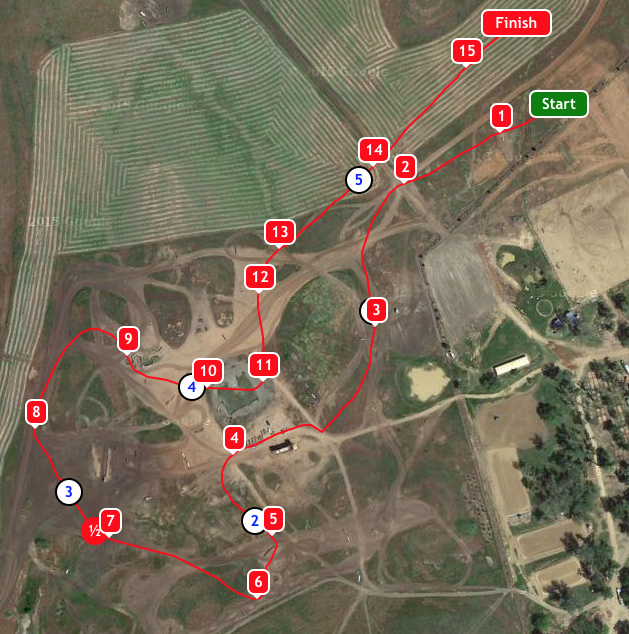 It was a really nice course. I know it’s hard to be creative at the Intro level since the jumps have to be so small, but Camelot did an excellent job. If you want to check out my CourseWalk, here’s the link. 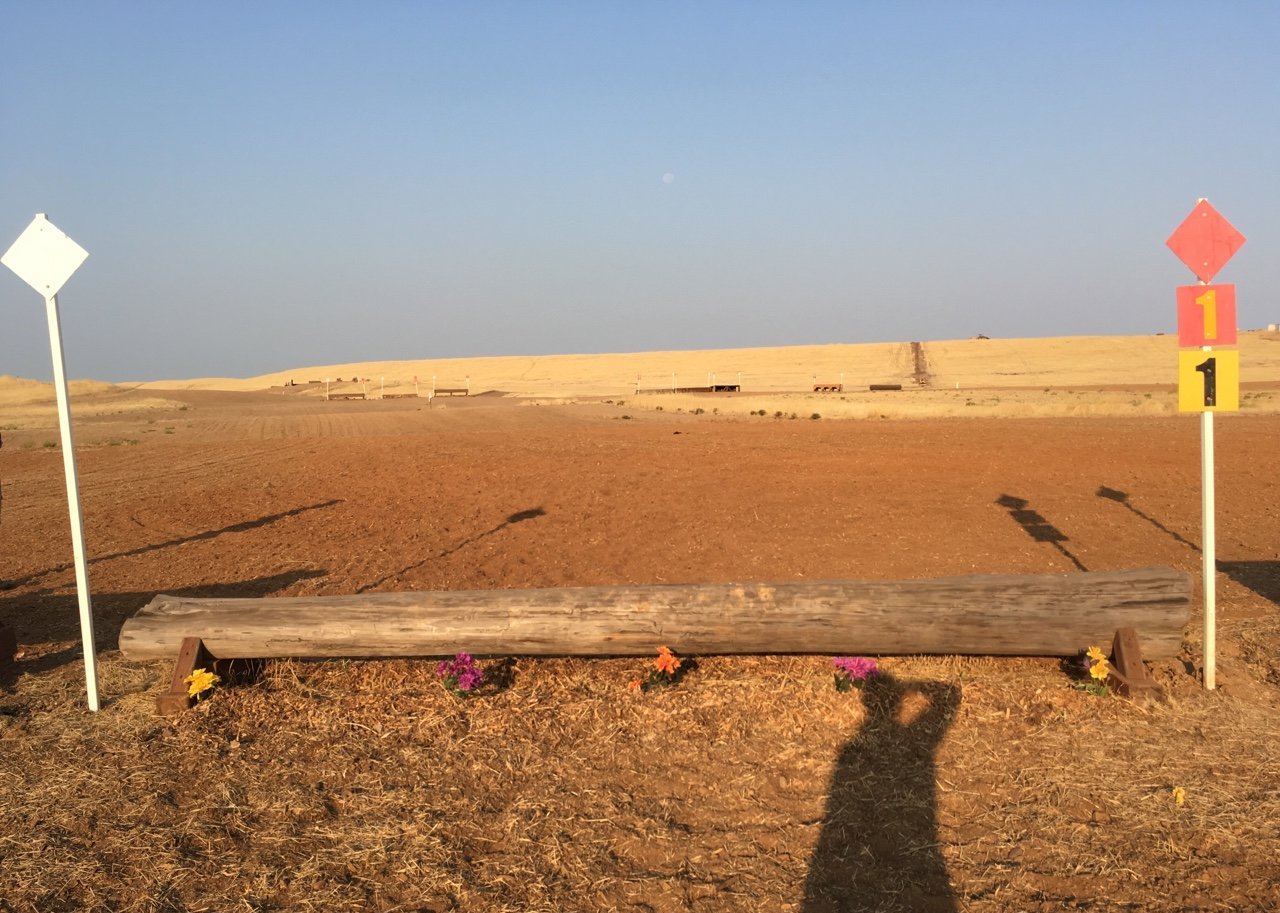 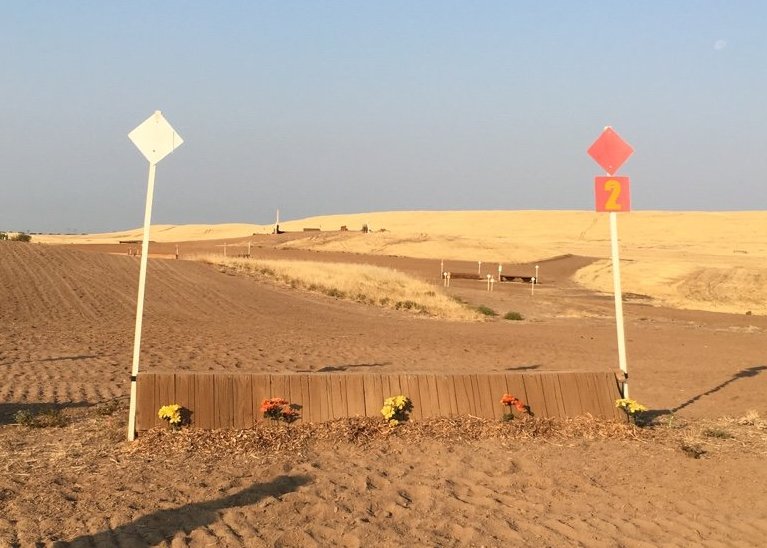 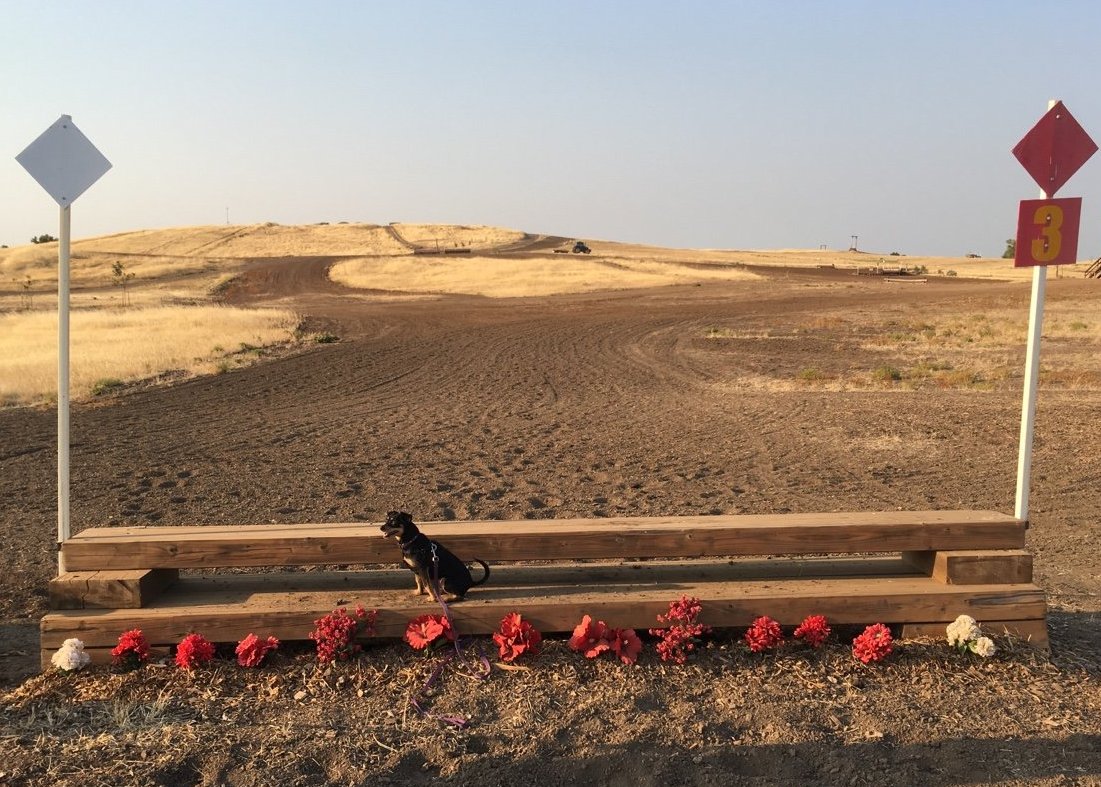 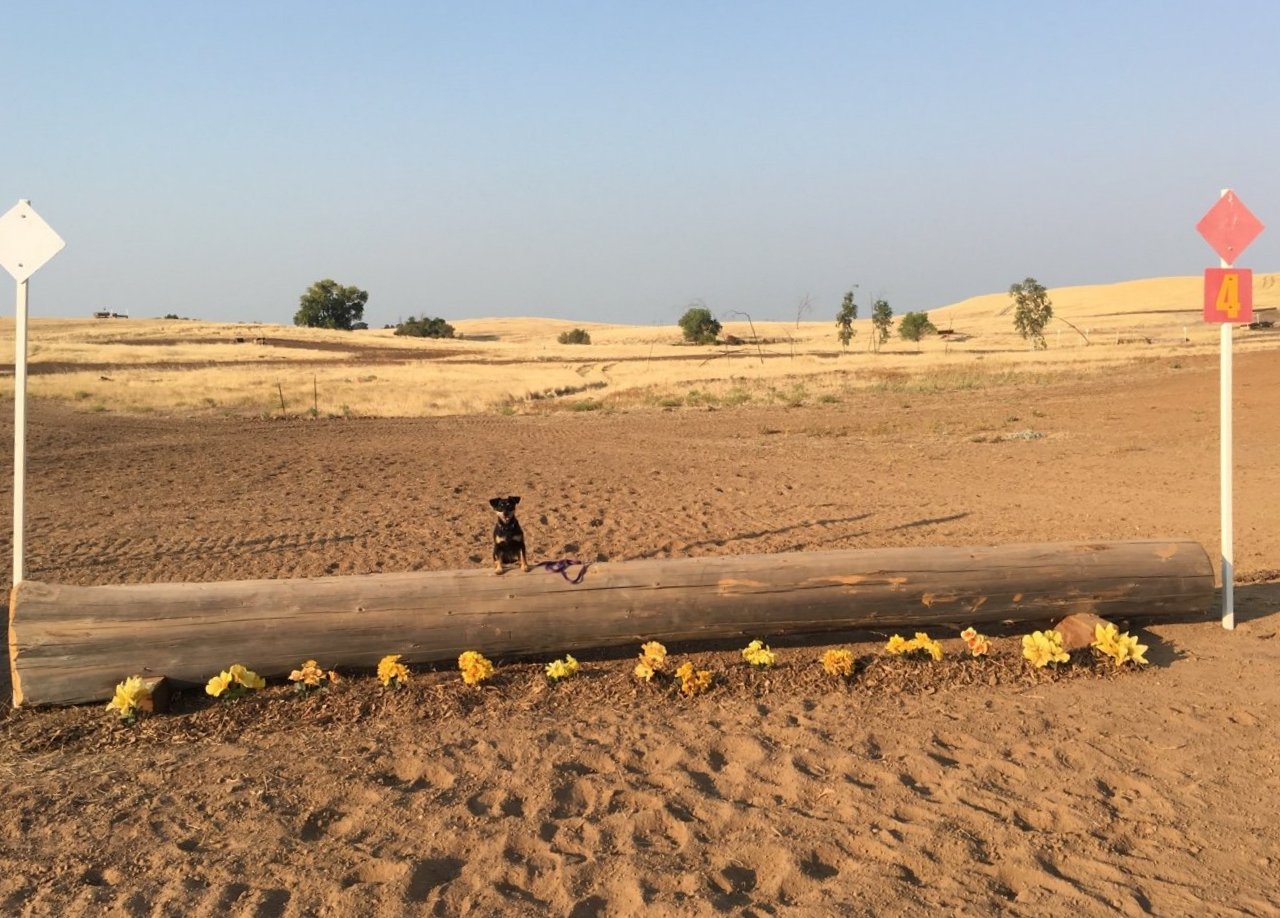 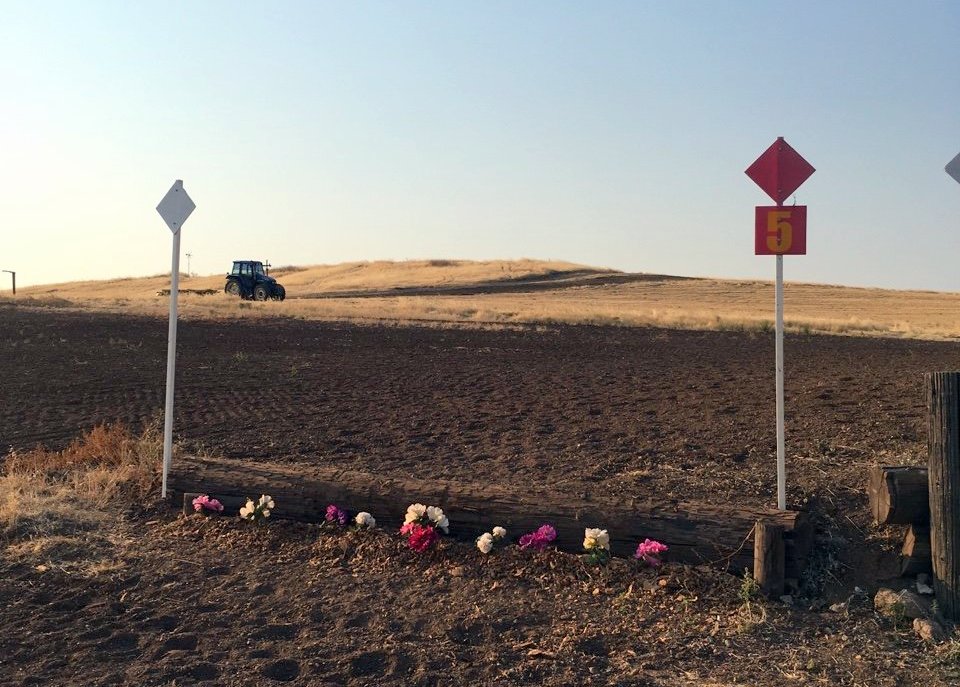 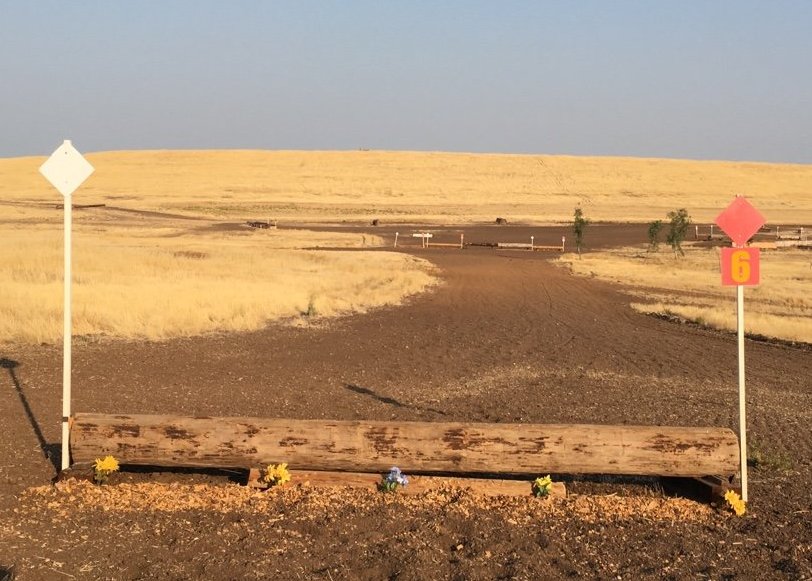 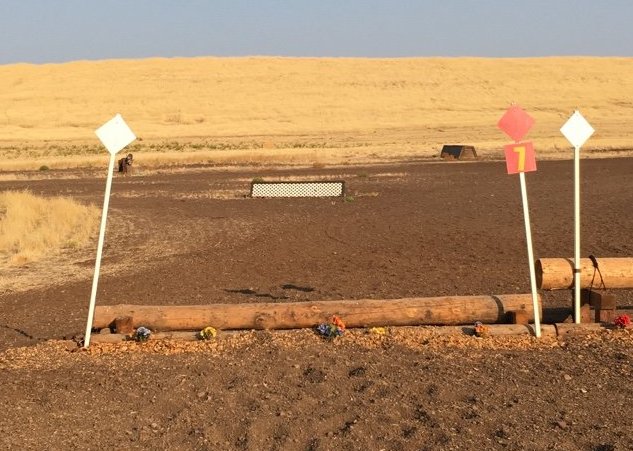 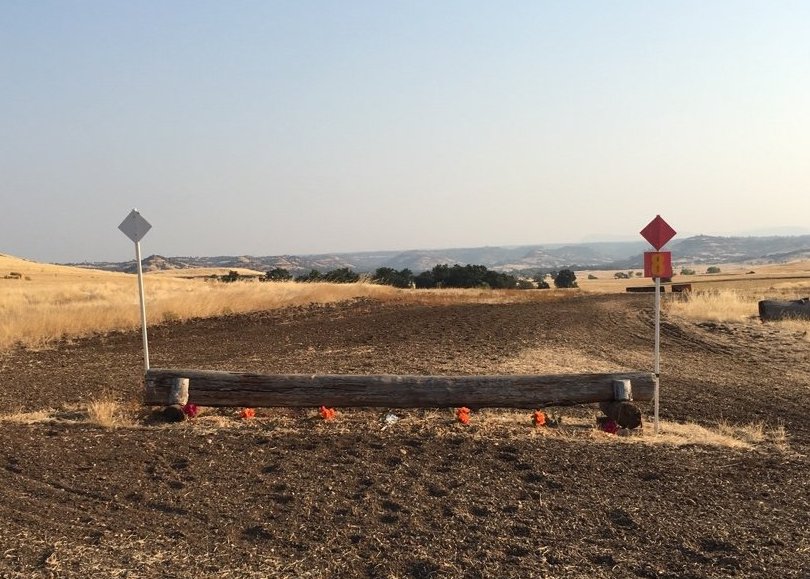 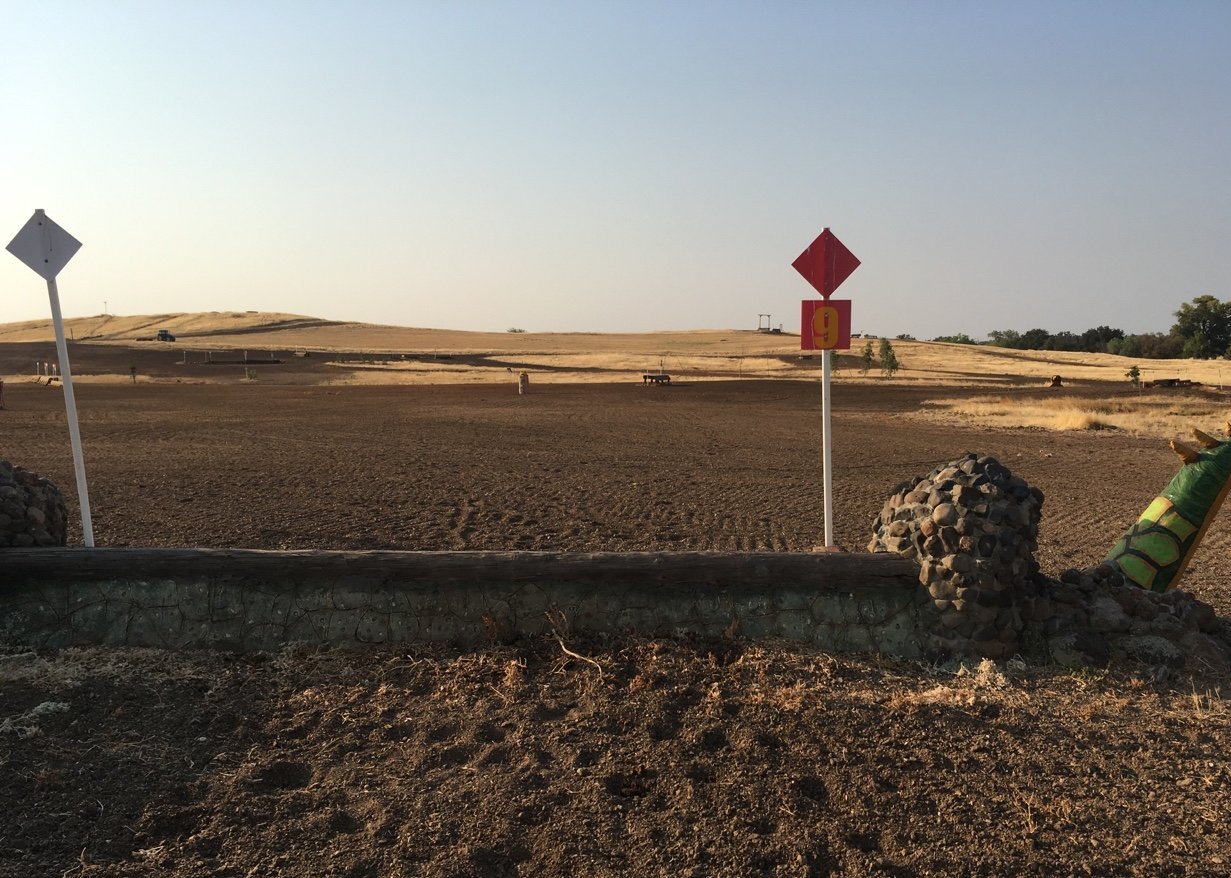 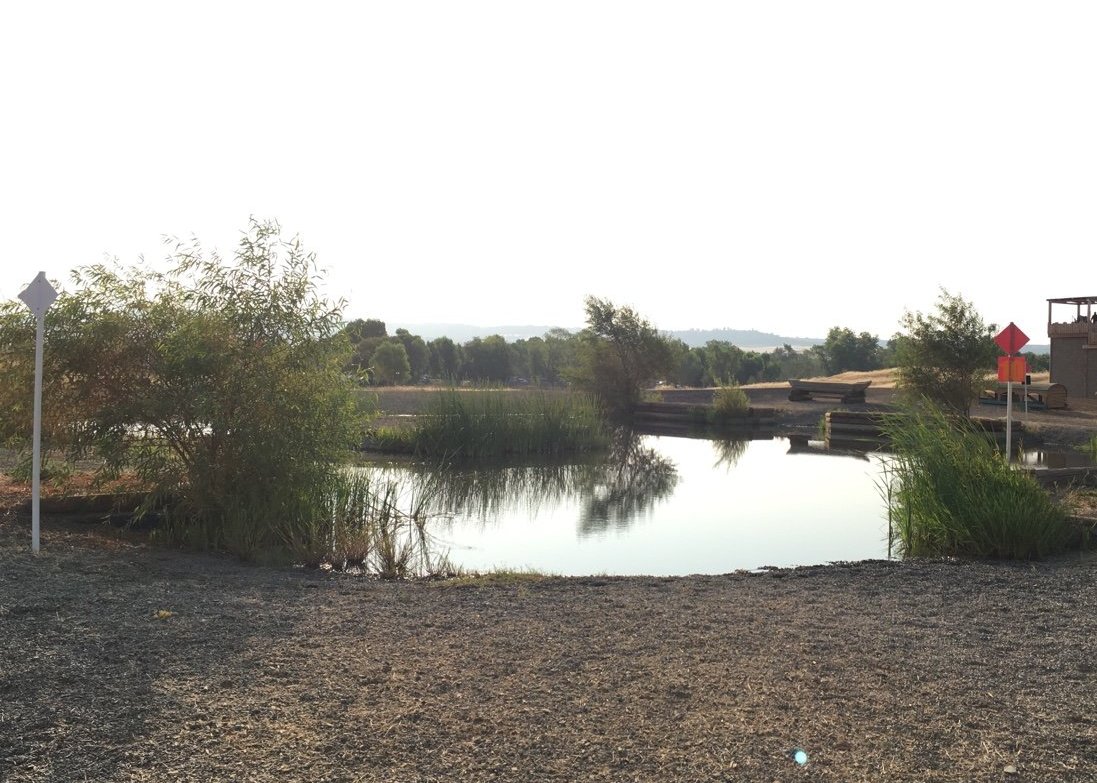 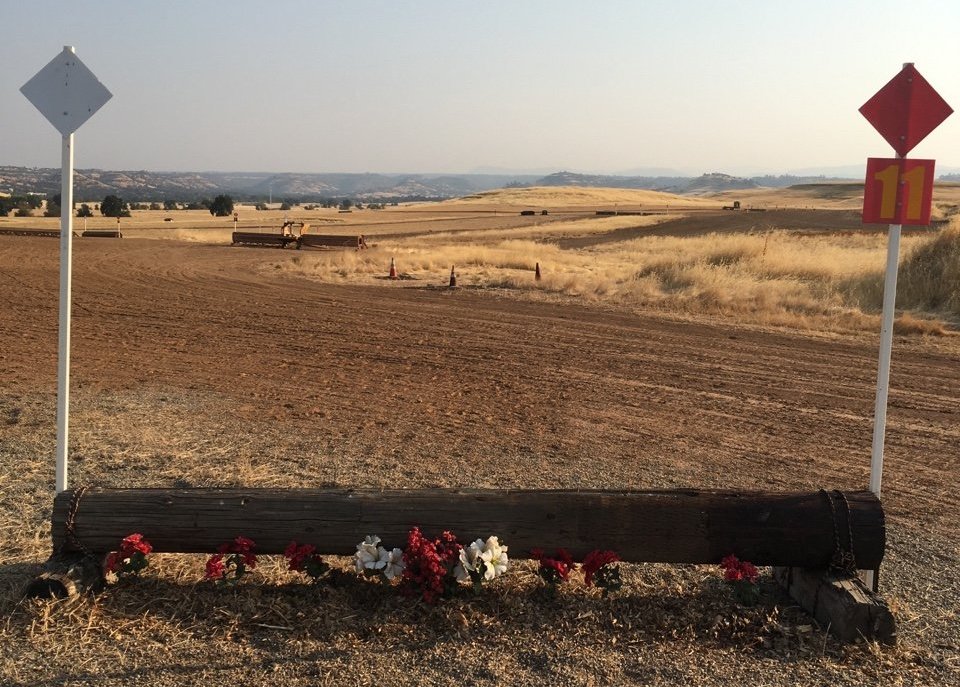 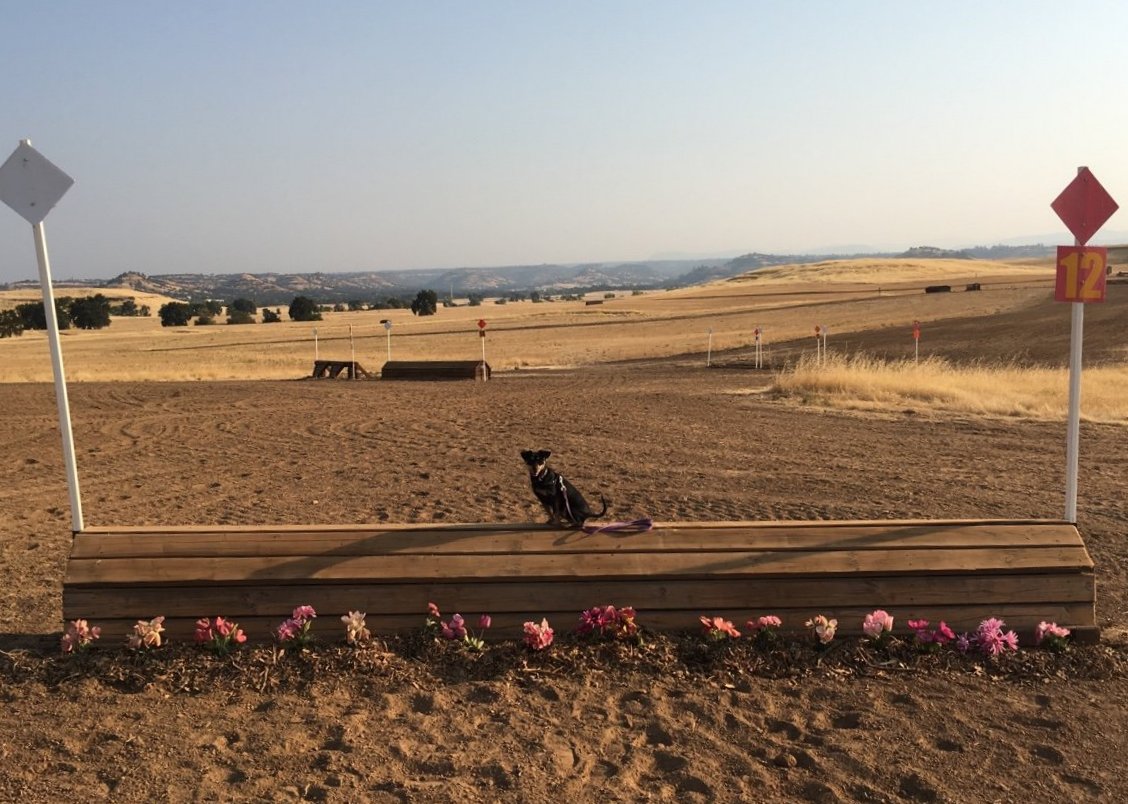 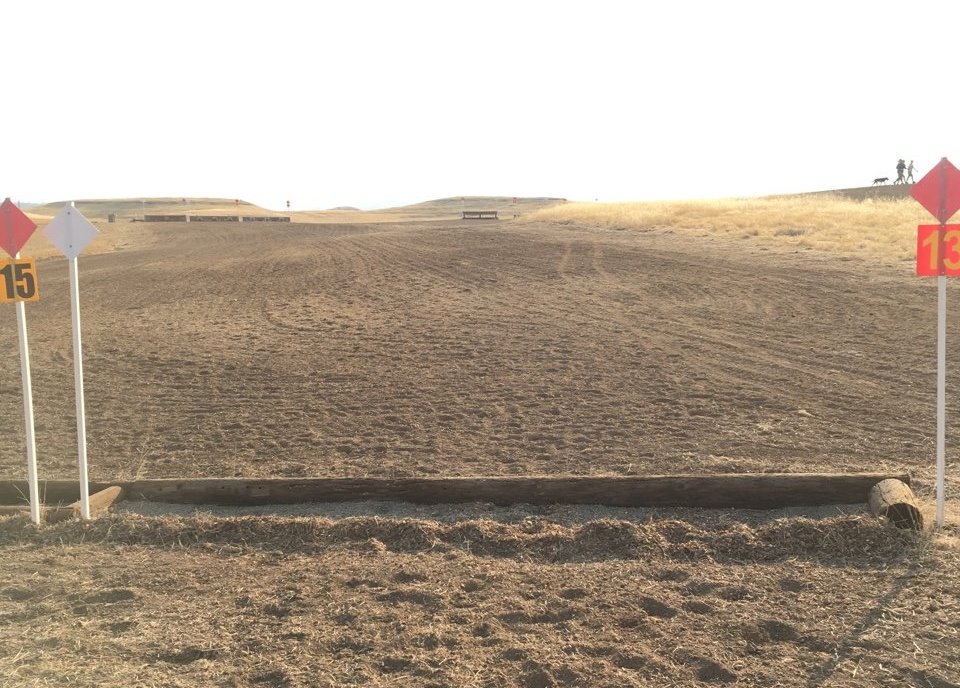 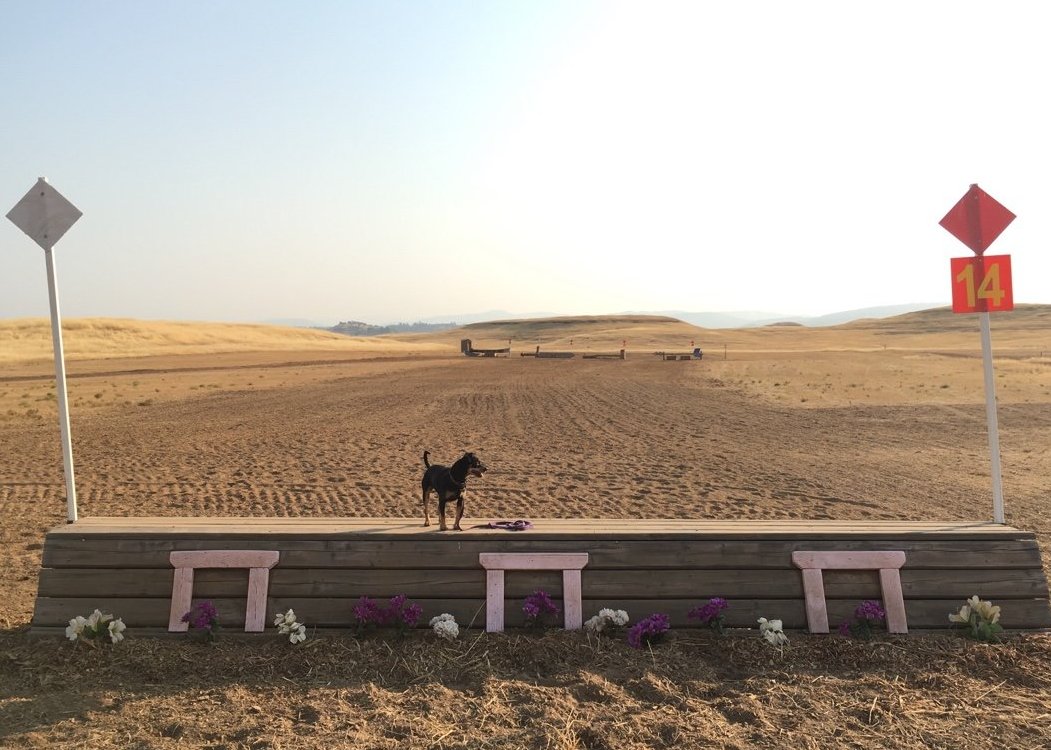 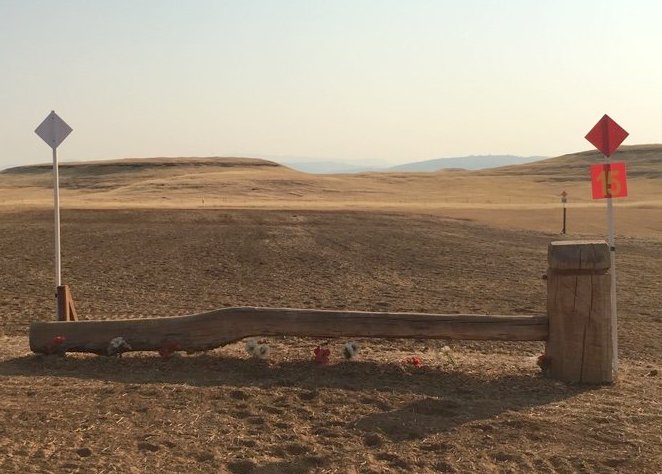 The warm up ring at Camelot is great. They actually have XC jumps in the warm up ring so you’re not just jumping poles before going out to solid jumps. There’s even a bank.

There’s also a small log off to the left of this picture. Here’s a shot from the night before. 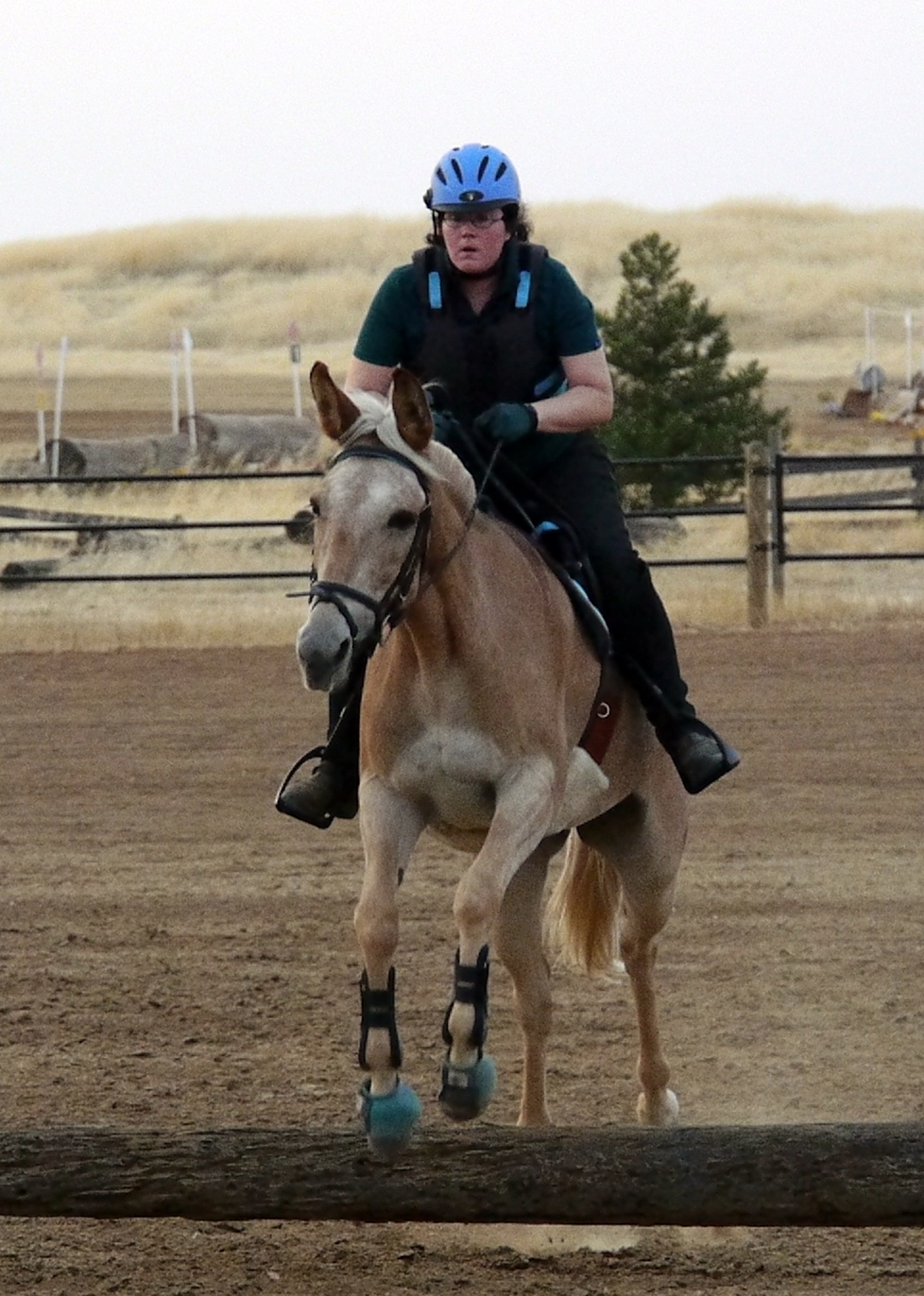 In order to conserve energy and hocks we only did a few warm up jumps and then went to stand in the shade. I seriously do not understand the people who were warming up hard for 30-60 minutes before running XC. And it wasn’t a 3-day so the horse had already done dressage. It’s 95 degrees out. Do you really need to jump for 30+ minutes before running XC? Around 2:50 I left the shade to go up to the start box area and as I was walking up, someone on course had a fall. They ended up stopping the person on course behind her and the person before me ended up staying at the start box area for a while. I would have stayed in the shade had I known it was going to take so long. I felt really bad for the person who fell. Apparently she was going slow and the rider behind her needed to pass. Her horse flipped out about that and bucked her off.

Anyway, she did eventually get up and walk off course and was okay. Her horse was caught and also led off. The poor kid who had passed her was upset and asking her trainer if it was her fault. It wasn’t. It was just a sucky situation.

With everyone okay, they released the rider on course and then the rider at the start and eventually I got to go. And here’s where I totally fucked up. I somehow got it in to my head that the optimum time (which was 5:42) was the minimum time. It was not. I don’t really know why I messed that up. I definitely know I’ll never do it again. I had written the jumps I needed to be at per each minute marker on my left arm – because I’m classy like that – and had my watch on my right so when you see me staring at my arms in the video, that’s why. 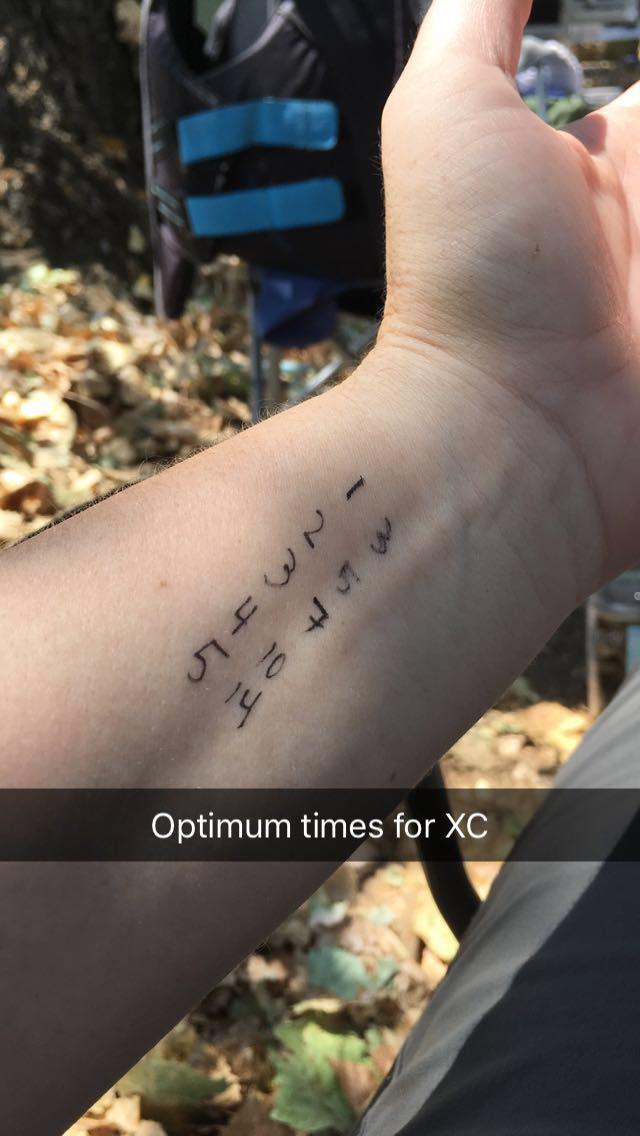 We started off great. You’ll see Nilla land from #1 throwing her head around. She was very excited. #2 was easy as well. She looked really hard at #3, but I gave her a little tap and some clucks and we were up and over. The castle/viewing area near #4 was absolutely terrifying and we practically side-passed by it. The #4 jump wasn’t a problem at all though she was still a bit put off by the castle nearby. The little bank at #5 was easy and #6 flowed well too.

We had a bit of downhill to #7 which was a little tiny trakehner. Nilla’s never done a trakehner, but she doesn’t care at all about ditches and this ditch was so tiny as to be barely a ditch so I wasn’t worried. I thought the hill down was more concerning, but Nilla was really only concerned about the jump judge at #7 who was apparently terrifying although in no way different from any of the other judges and well set off from the actual jump. 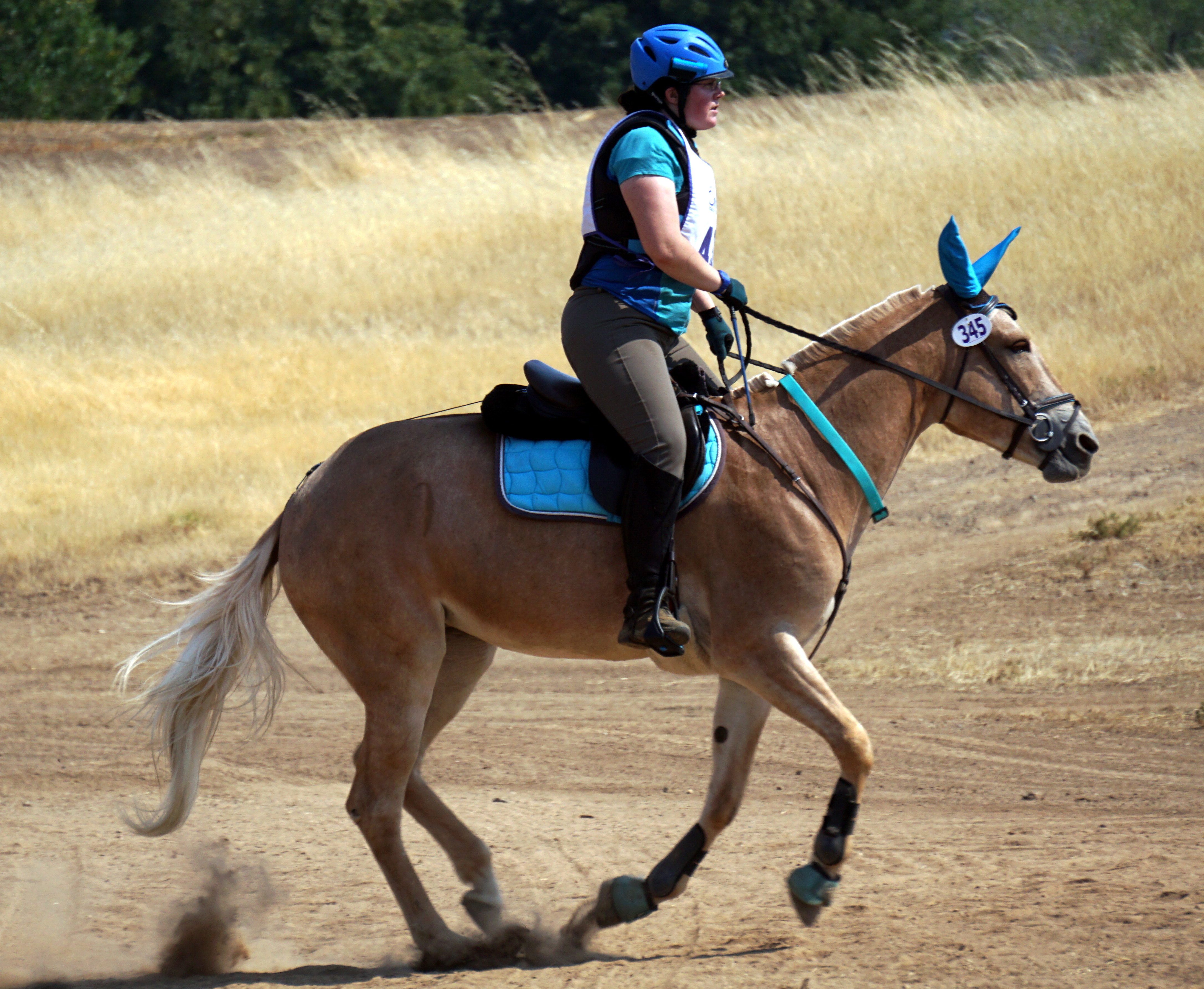 There are two weird sections in the video going to #8 and to #9 where I had to fast forward to get my video to be short enough to upload since I don’t have the pro Vimeo account. Sorry about that. I was trotting these two sections because I thought I was ahead. Because I had brain-farted on the whole meaning of optimum time. #8 was easy. I thought she might care about #9 since it had the dragon tail and we’ve never jumped a stone wall before either, but she didn’t.

Going into the water she slammed on the breaks, but I pushed her hard and she didn’t actually stop, just walked in. Once in, we picked up trot and carried on through. One of the photographer’s caught a picture of me petting her and telling her she was a good mule for going through the water. I wish I’d know she was there, I would have tried to look up and smile. 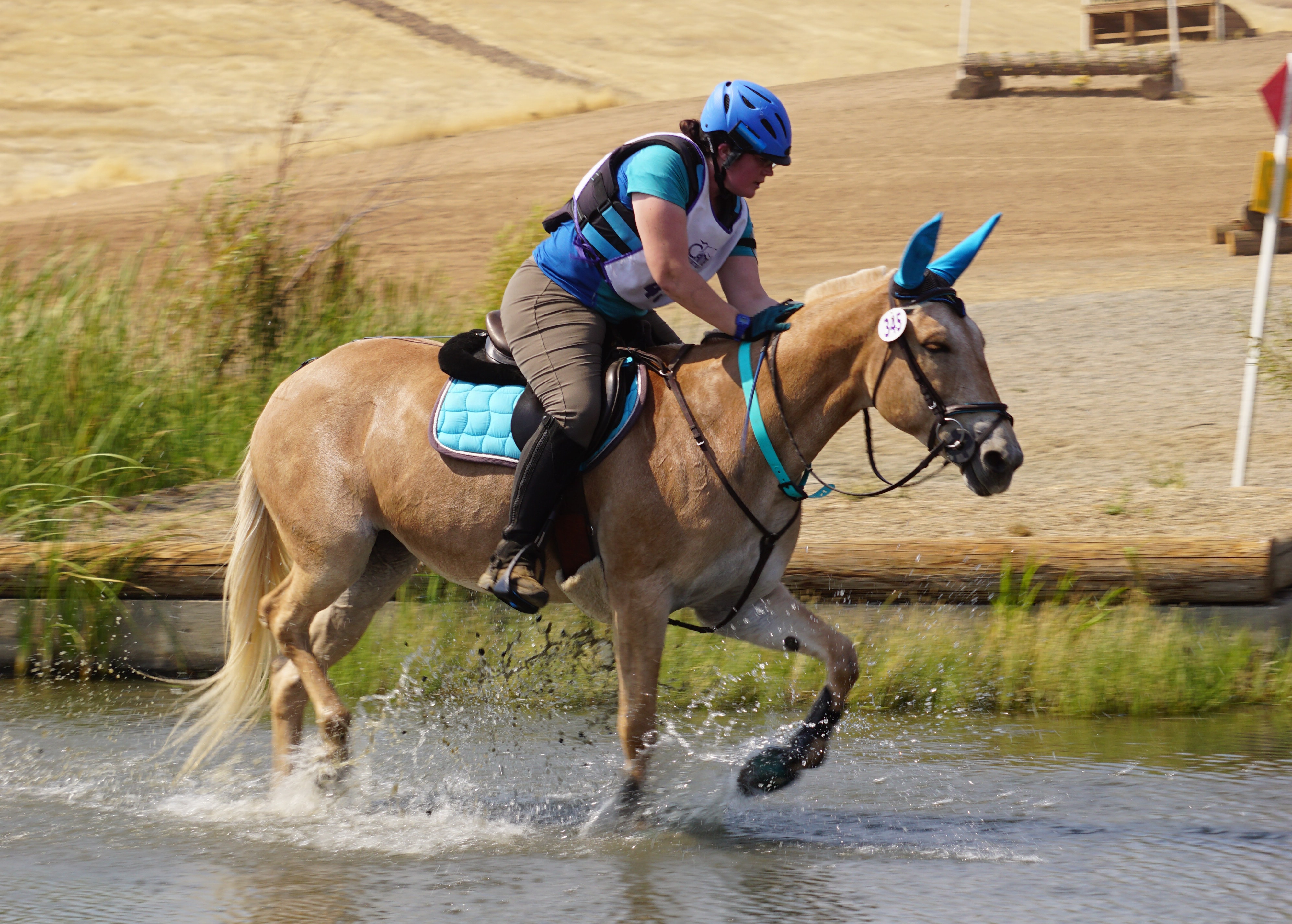 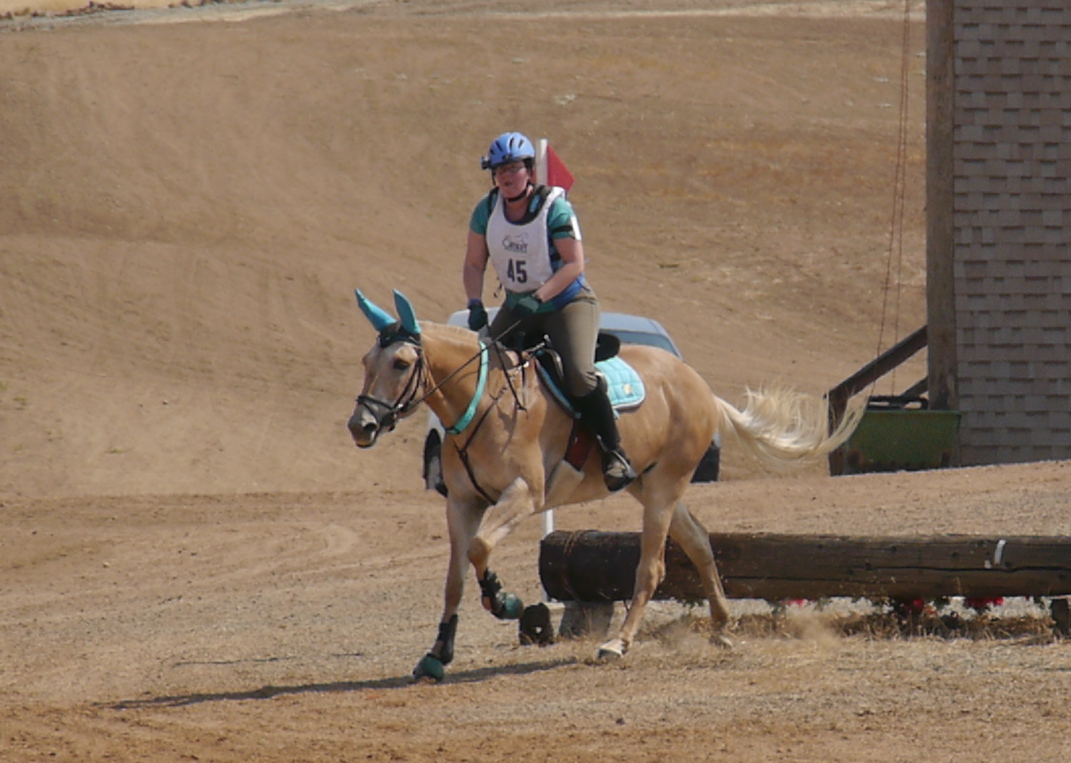 #12 was also easy. She was really just loving it. Check those happy ears. Speaking of ears, I overheard the announcer at one point telling people they might have noticed that this horse has big ears. My husband said he kept referring to her as the hee-haw. Which was fair enough; she has spent most of Friday screaming her head off. 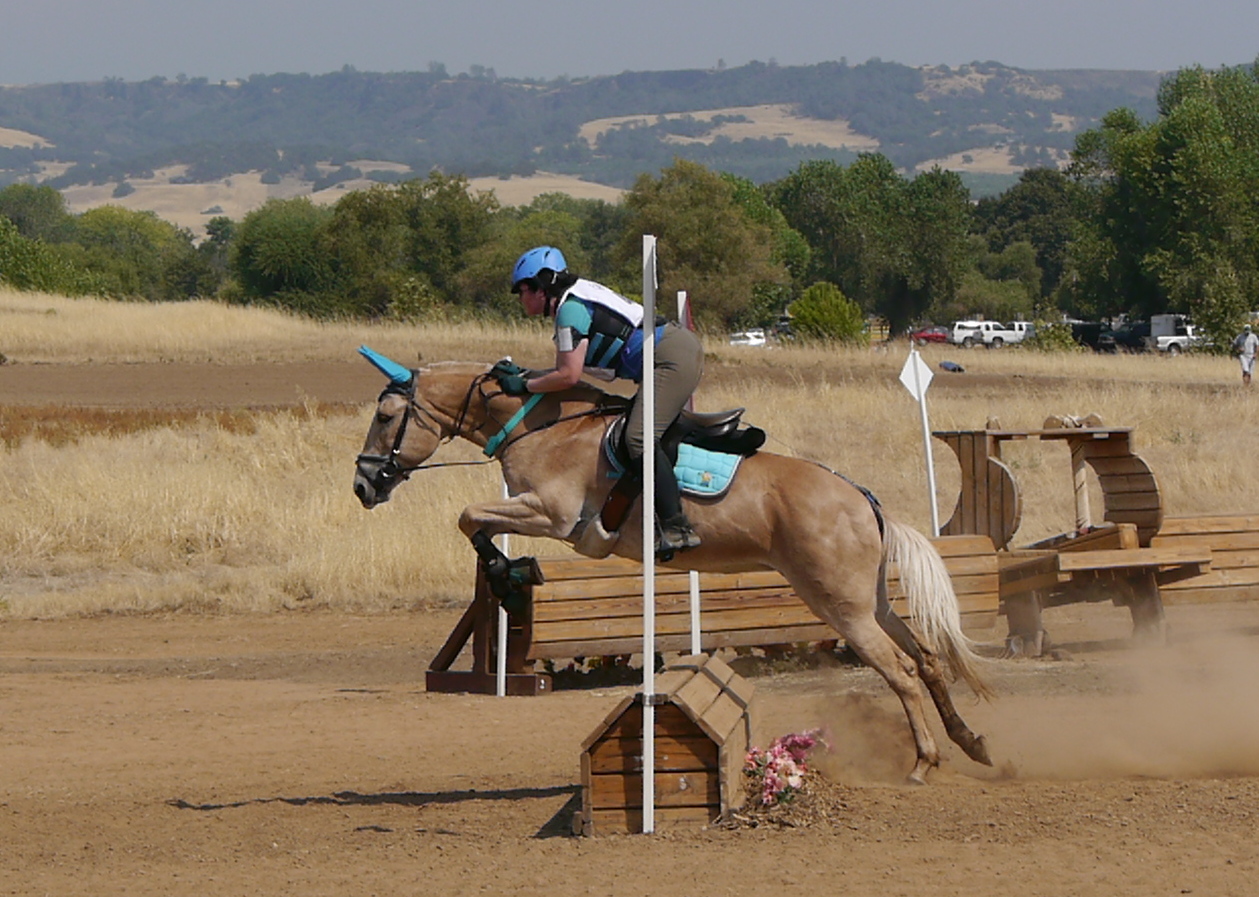 Nilla says these jumps should be bigger

#13 was the faux ditch. It was in a line with actual ditches, but this one was really just a log with a small pile of sawdust on the other side. Now, after #13 was where I messed up my time. I knew I was supposed to get to #14 at 5 minutes. Half way between #13 and #14 I was at 4:30 so I thought I was going too fast. So I circled. Then I circled again. Because I am a giant idiot. I had to cut those circles from the video to get it short enough to upload so you don’t get to watch me fuck that up.  Not sorry.

Then we went and did #14. Nilla took it like a champ and then I trotted onto #15 taking my freaking time because I thought I was good. I was not good. We popped over #15 and crossed the finish at 6:01. Which got me 7.6 penalty points. A few people had faults/were eliminated so we moved up to 6th from 7th, but we would have been tied for 5th out of 12 if I hadn’t messed up my time.

I’m pretty pissed at myself about the time faults. If we had needed to trot and come in over time because we were staying safe or conserving energy in the heat, I’d totally be okay with it. But we came in overtime because of my own stupidity. I know Nilla doesn’t care – at all – but I feel like I let her down. She was awesome. She flew over all of those jumps and she wasn’t even tired afterwards. We’ve never cantered that much and I was worried she’d struggle, but she didn’t. I don’t consider myself an ambassador for mules. There are many better riders out there doing that. However, we do face a fair amount of stigma. Especially in eventing where we aren’t even legal. In messing up that time, I made it seem like Nilla wasn’t good enough to do it. Just a mule who can’t keep up with the OTTBs.

But she’s not. She’s an awesome cross country mule. She absolutely loves it and has tons of stamina and – as you can see from her massive over jumping – the potential to go much higher.

Anyway, enough beating myself up. Here’s the video:

Sorry in advance for the loud breathing and the crookedness. One day I’ll remember to mark my helmet camera at the correct spot so that I don’t put it on every time and go, “now where is it level?”