On Friday before the Camelot HT, we took Levi and Eugene out schooling on the cross country course. Levi was completely lit from all the wind and the new place and the fact that (I only realized this after he started freaking out) that he hadn’t been ridden since the previous Saturday. 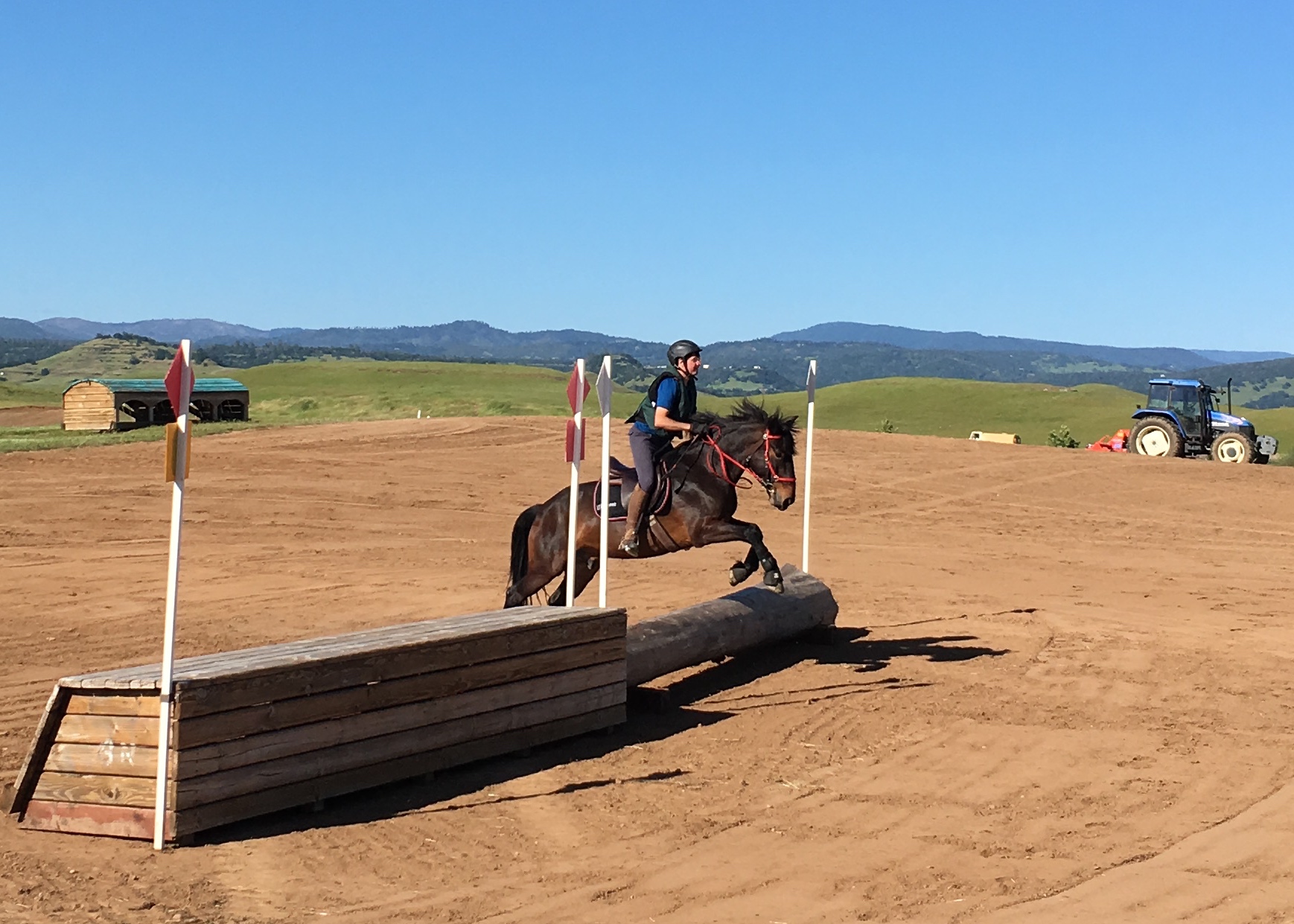 My husband was supposed to start with this jump. But he landed from it nicely and decided to keep going. And Levi, who was already pretty antsy, lost his freaking mind. So here’s the only picture I got of Levi on the XC course. 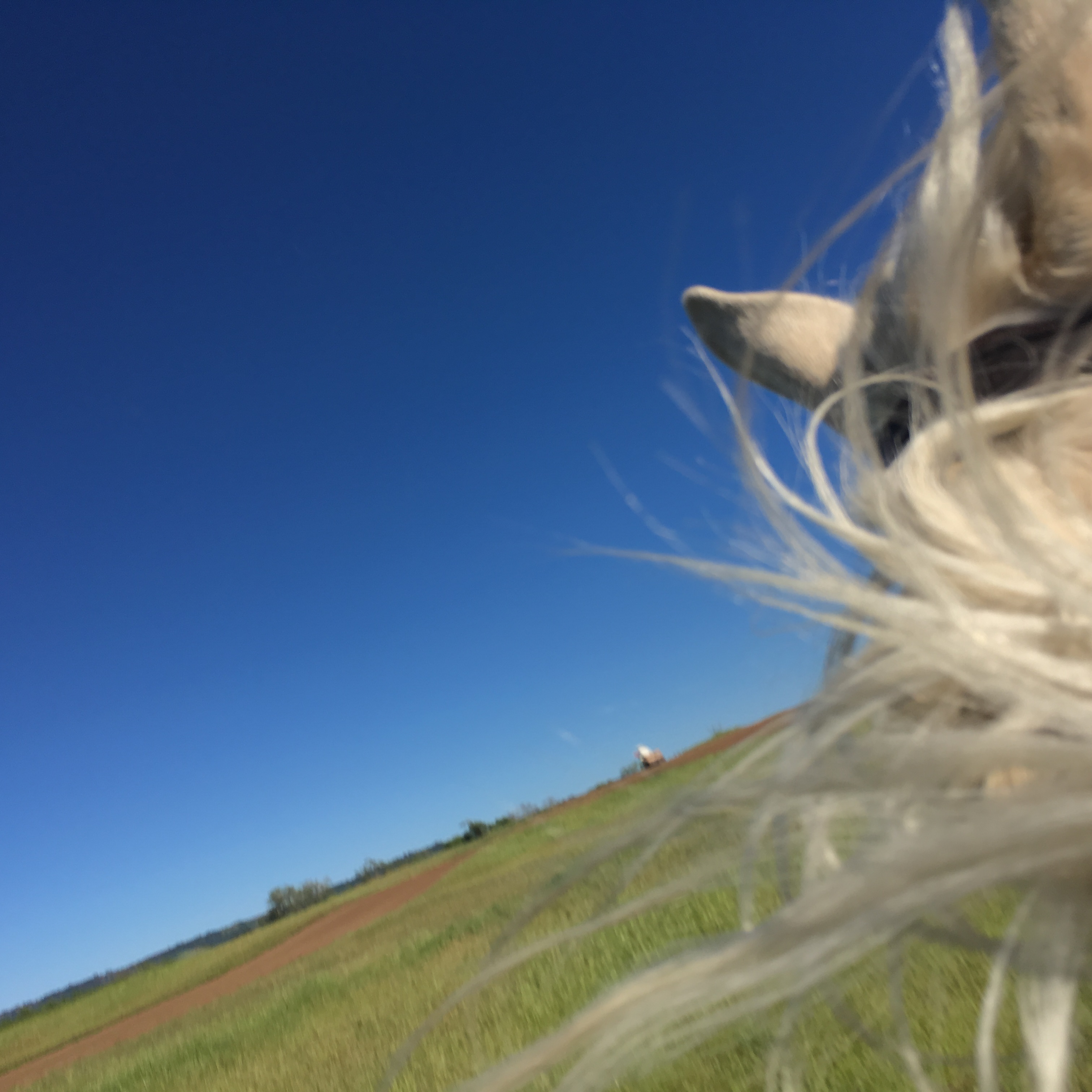 I didn’t actually intend to take this picture. I still had my phone in my hand from taking the shot of my husband jumping when Levi tried to bolt after him and pitched a rodeo fit when I wouldn’t let him. I ended up throwing my phone into the grass to have my hands free and somehow did not fall off.

My husband returned and we did some schooling of the water, which Levi was enjoying, but then decided it was too much fun and pitched another fit. So I just hopped off and took pictures of my husband schooling because I did not want to die.

Eugene absolutely loves water, but he’s never been able to school it before. He picked it up very quickly and they schooled some banks in an out of the water as well. Of course, Eugene’s favorite thing about water is drinking it. My husband was trying to convince him he needed to keep moving through it so he combined the two activities: drinking and trotting.

We went around and did a scattering of the jumps for the course the next day. Eugene was being really good so we didn’t do everything, but wanted to get him over some of the spookier jumps and just get him back in XC mode since they hadn’t done it since November. 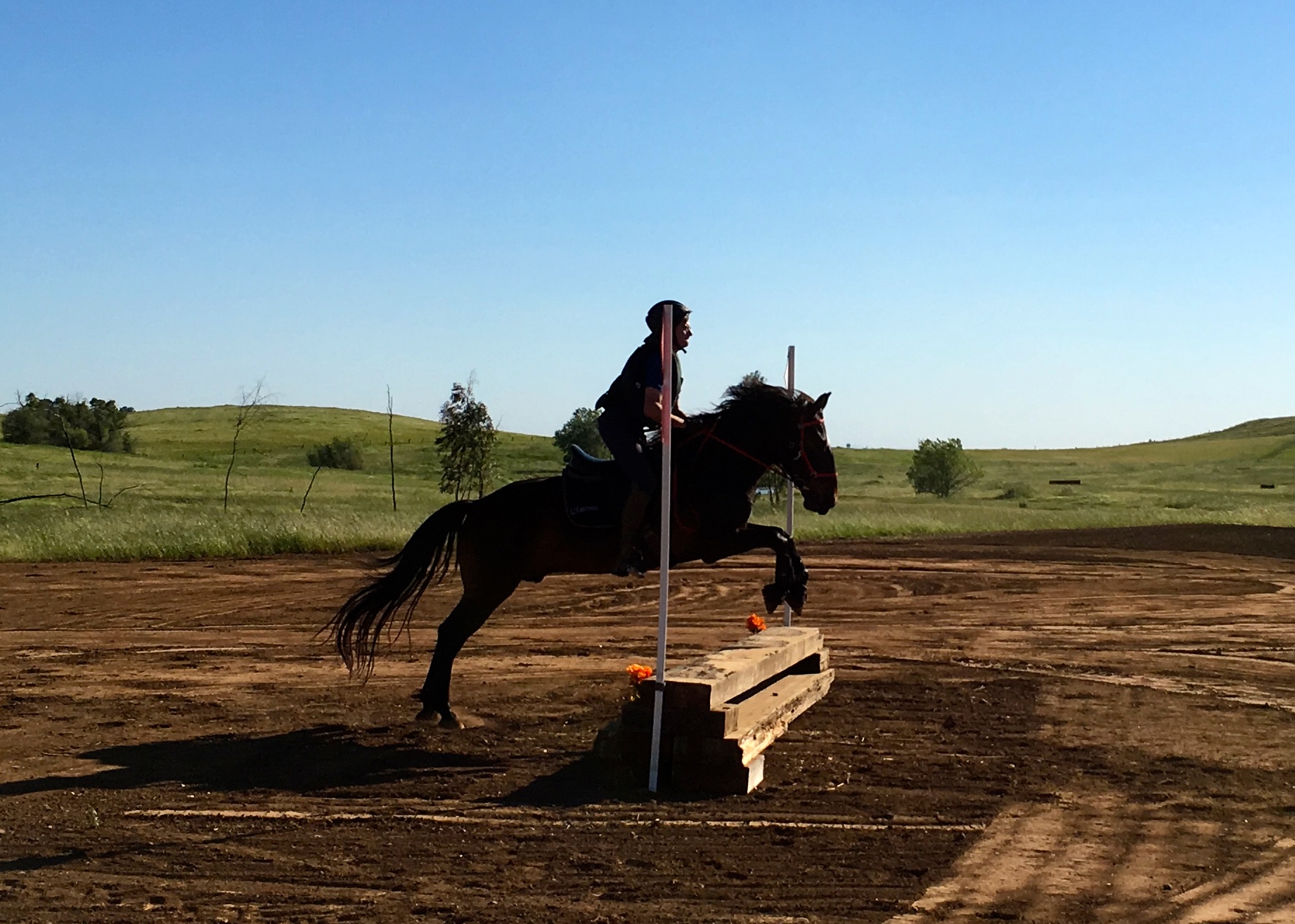 On Sunday, we returned for more schooling. I was going lunge Levi and then take him, but he managed to pull part of a shoe from pawing at the pen all weekend when we removed his best friend. Because Nilla’s hocks are bad, I try to limit her jumping. So I just threw her dressage saddle on and we went out to act as photographer.

We started by schooling in the arena and then headed out to the cross country course. Our goal was to school a bunch of the BN course in preparation for a move up. One of the things I really like about Camelot is the mix of jumps for each level. Some of the BN fences were nice and easier; some were more maxed out and challenging. 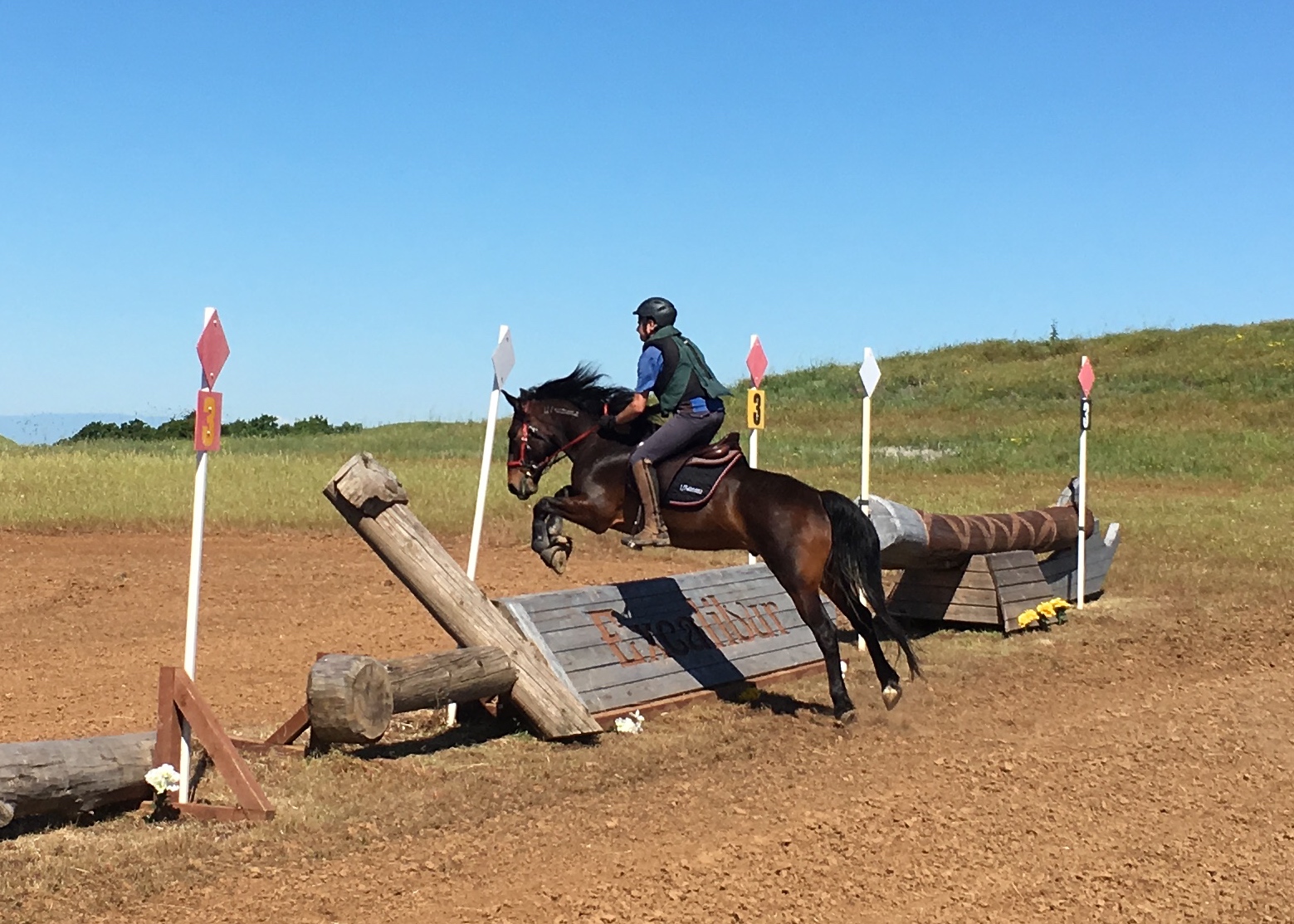 I love this jump. I kinda wish I’d thrown Nilla’s jumping saddle on just to do the Excalibur, but that’s actually why I put her dressage saddle on; I knew I’d be too tempted otherwise.

We did the first few jumps, then skipped the water because some other people were schooling it and went to do the banks. Eugene was really not understanding the concept. He would go up and down, but it just wasn’t looking good. I think he kept expecting the log to be a jump and wasn’t taking it like a bank. We schooled it a bit, but then decided to move on to other jumps and get some instruction on banks. 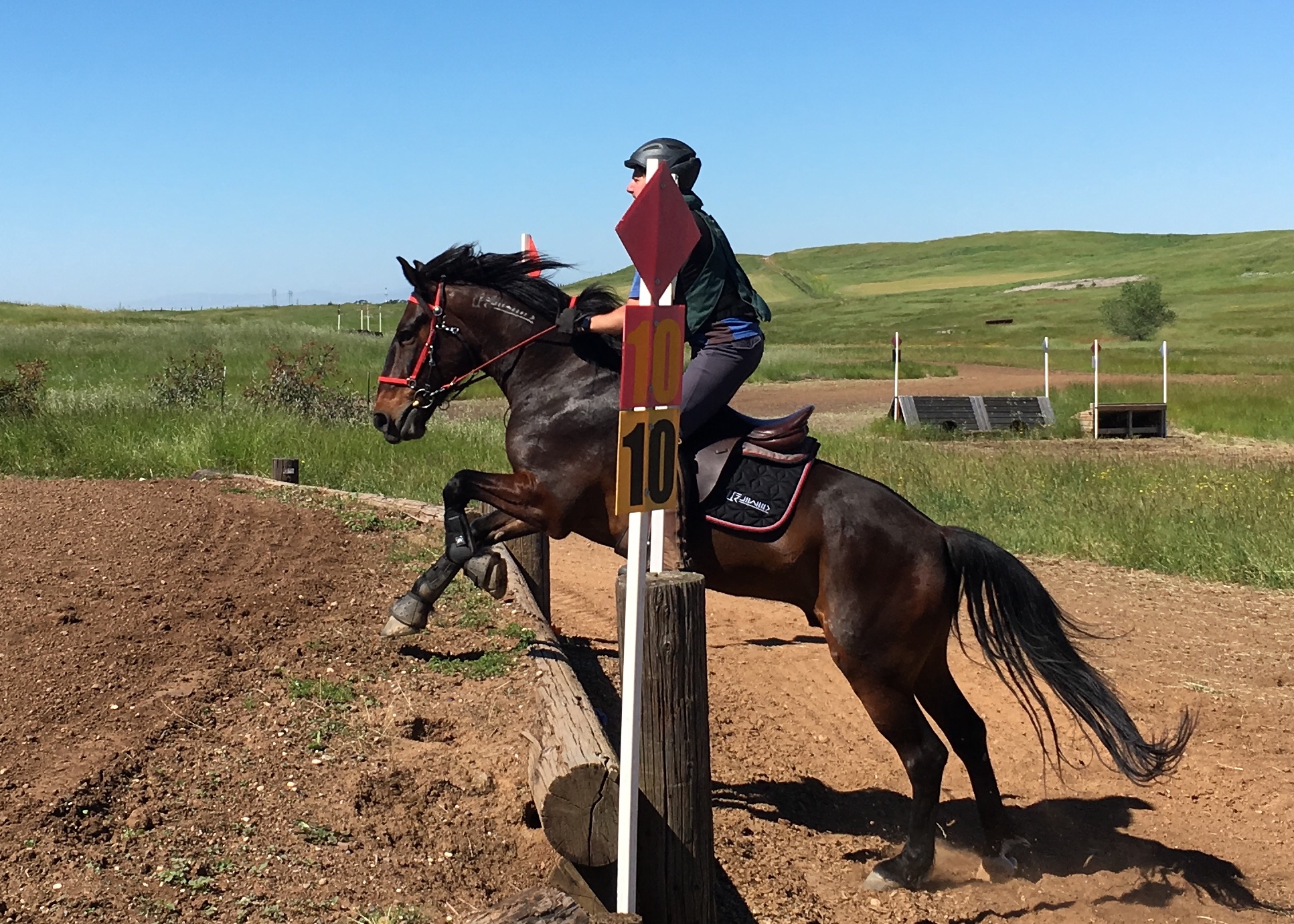 We moved on to schooling a little table. It’s not huge, but it’s actually set on a slight decline and there’s a sharp turn on landing so it was a bit of a challenge. The first time through, Eugene wasn’t prepared for how bit it was be and really over-jumped it. 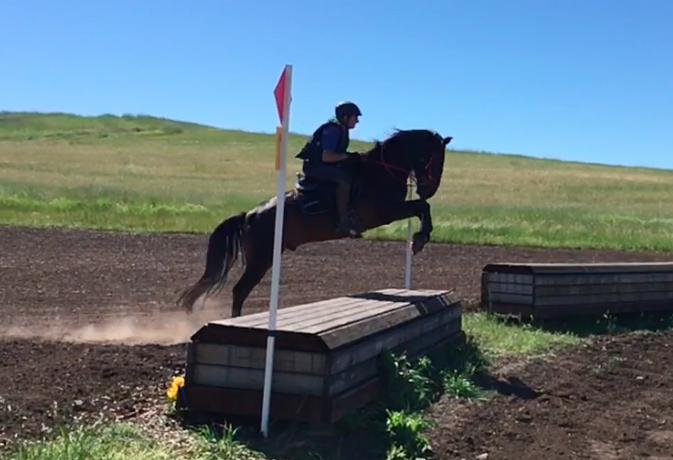 They came back around and had a much smoother jump.

From there we schooled the bench and then the dragon before coming back to the water. 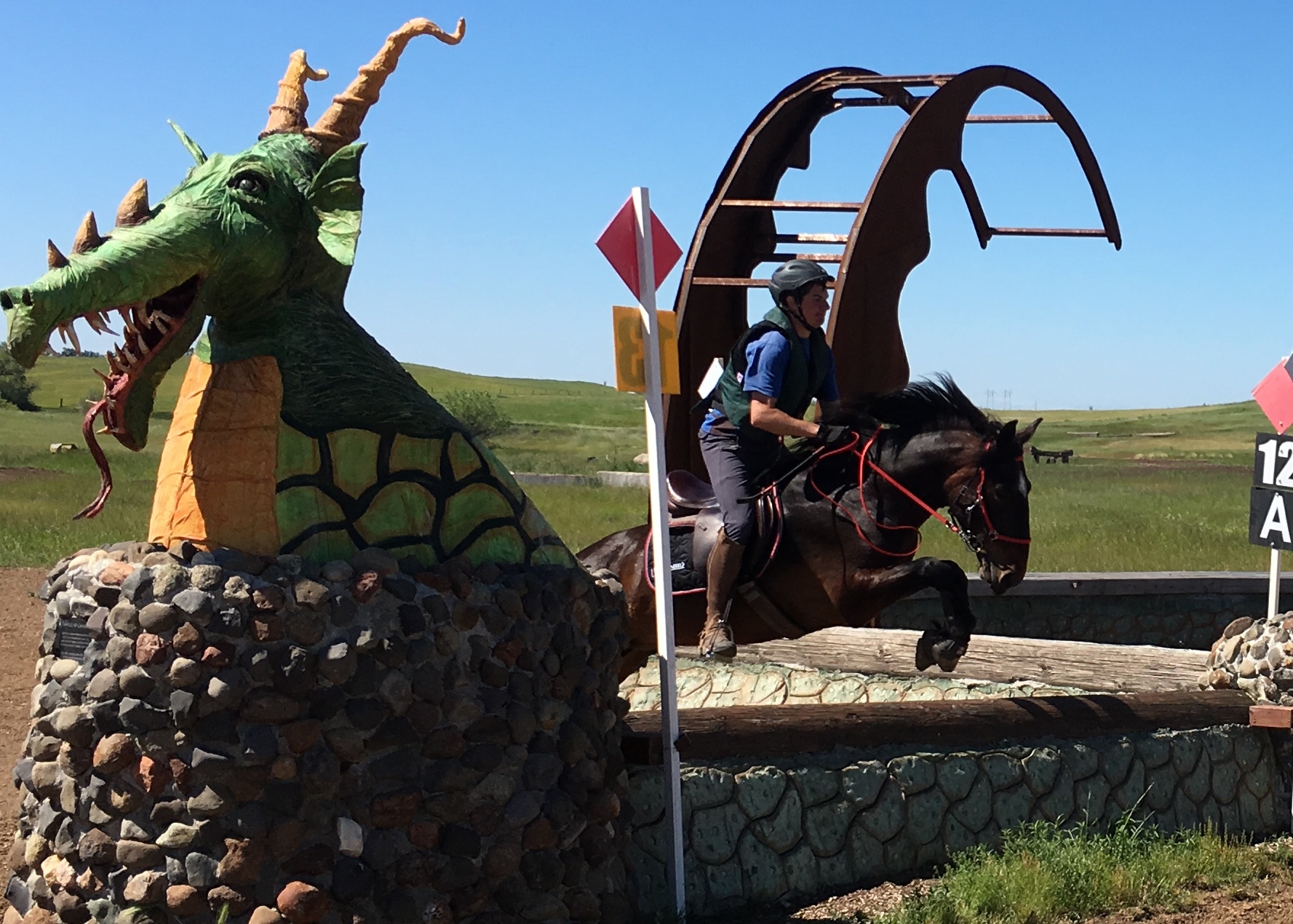 There were still people in the water, but they were just walking around so we asked if we could school. The jump right before the water is a bit of a looky fence. It’s shaped like a canoe and as you approach it, you only see the water behind it even though the water is a few strides off. For a horse that’s never jumped into water, it’s a bit intimidating. You also have a make a turn off the main track to get to it and the first time to it my husband made a curved turn and Eugene got squirrelly and just ran out to the side. They came back around with a straight approach and leg on and made it over, though he was still a bit wiggly.

Finally, we left the water and did this huge table. As Nicole said, it’s a “beast” of a table. Eugene just locked on and powered over it like it was nothing. He’s such a brave little jumper.

We finished up by schooling the BN rolltop to ditch “combination.” They’re only a few strides apart, but they were flagged as 2 different numbers for BN. Eugene doesn’t care at all about ditches so long as my husband doesn’t look down and the jump isn’t very big either, but it is set at an angle and slightly downhill, which made it a bit challenging. It was nothing the little Mustang couldn’t handle though. 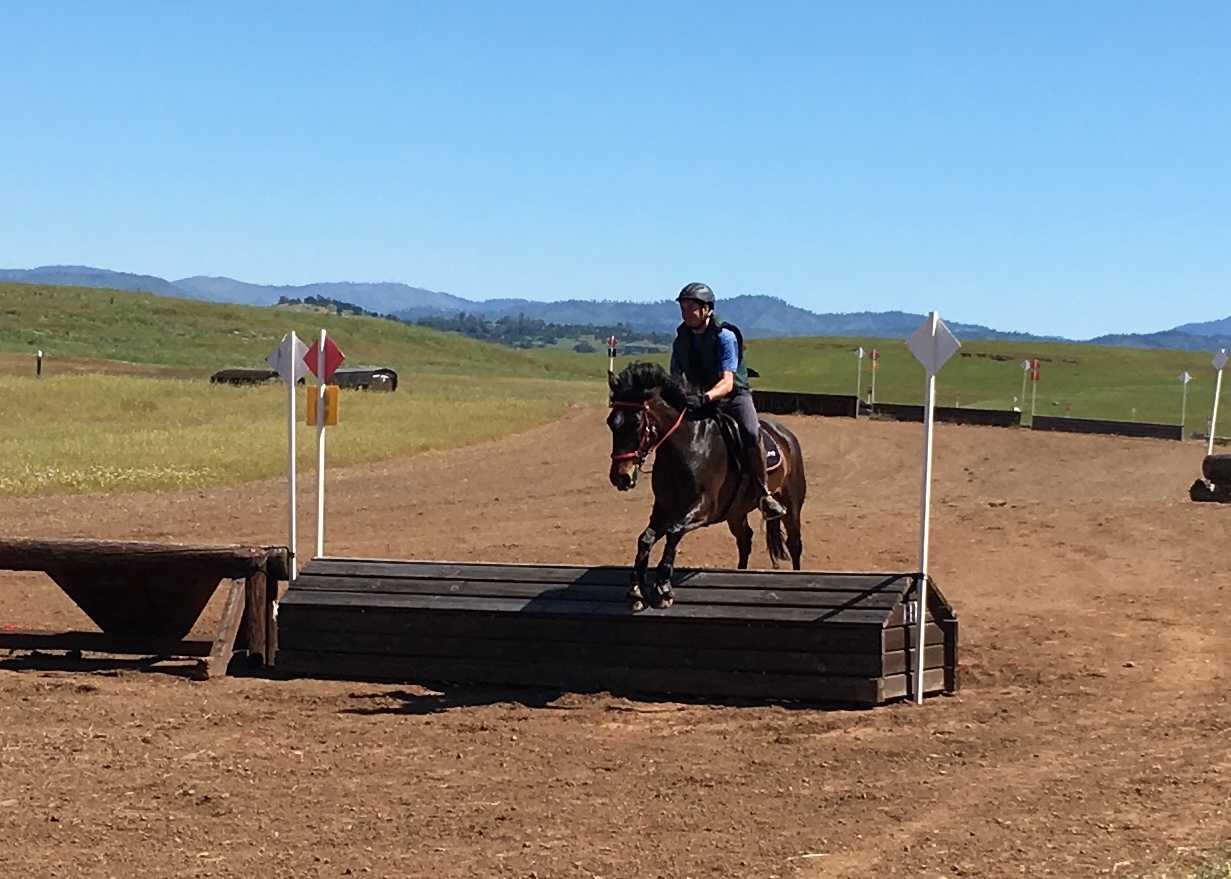 Schooling was a lot of fun and and it was nice to be able to have that included in the show entry. It was also great to see just how well Eugene handled the bigger jumps. I think they’re going to do just fine at their first real BN.