My husband and I ventured up to the city last week to see Cavalia’s new show Odysseo. 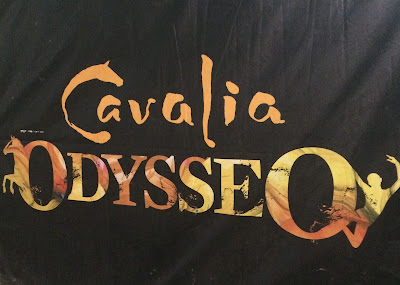 We drove and ended up arriving pretty early because there was almost no traffic. All the big companies give their employees the week off for Thanksgiving – including my husband’s – so there were a lot fewer cars on the road. It was cold out so we sat in the car and watched the people shivering in line.

We had Rendez-Vous VIP tickets, which got us entrance into a private tent with open bar, buffet dinner, private bathrooms, private gift shop, and lots of plush seating.

It was dark with fancy modern lighting, so no good pictures, but it was pretty cool. The food was so-so. I’m incredibly picky so I’m probably not the best judge of food, but I wasn’t really impressed. 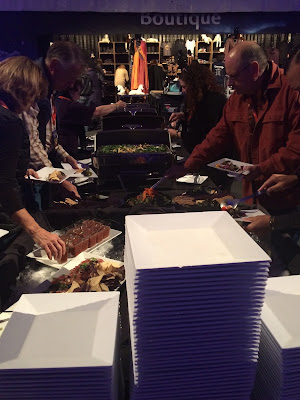 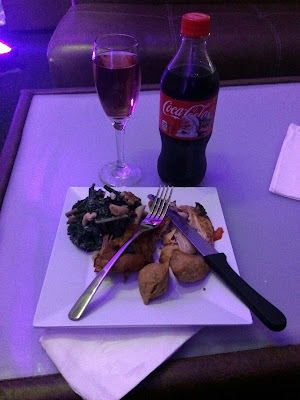 The free drinks were much more impressive. They didn’t dick around with pepsi and give you some stupid little plastic cup. No, they gave you a full bottle of real Coke. I know, I know, but I already said I’m not the ideal VIP. I could not care less about the champagne and wine – I was just happy to get Coke. In a bottle. VIP is wasted on me entirely. They did also have a sparkly rose, which was really good… to my plebeian tastes.

On to the show. There were horses and they were very pretty. They did a lot of pretty things like trotting and cantering around with people in pretty outfits on them. I thought the jumping was fun, but it wasn’t very high or difficult. There was a really cool sequence with women doing high silks acrobatics (think cirque de soliel) with men on horses pulling them around like a real life carousel. The trick riding was very impressive, but it was a bit short.

Here’s an example. In both shows, they have a roman riding sequence. In Odysseo, women in long flowing dresses, trot around in patterns standing on the back of two horses. It is impressive and it’s pretty, but they just trot around. In the first Cavalia, the roman riding sequence had them jumping and cantering and doing much more advanced things while roman riding. There’s even a part where a woman stood on two horses and drove two more in front of her and jumped a jump. 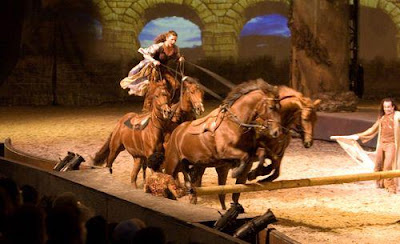 The trick riding was the same. A lot more was done in the first show. That said, it was very impressive work in Odysseo as well. Especially the guy who swings himself beneath and all the way around his horse while it’s galloping. The woman seated next to me actually screamed.

At intermission we got to return to the VIP tent for a dessert buffet. Which was huge and with a lot of variety. I very carefully piled every single type of dessert onto my plate. By the end of the line, my husband was completely exasperated with me as I was trying to fit more desserts on my little plate, but I was determined. I paid for this dammit and if I want every single dessert I will take it. The server standing at the end of the line was all, “you go girl” so at least someone gets me. I didn’t actually eat all this food, I just took small bites of each one so I could try them all.

Intermission was short so we ate up, hit the private bathrooms, and headed back to our seats. The second half of the show included a very cool dressage sequence which was interesting to watch as a horse person. There were parts where the rider and horse would be doing something really cool, but only a horse person would know how difficult that maneuver was. An example would be the 1-tempis: to a non horse person, it just looks like cantering, not flying lead changes every stride. It was interesting to listen to the audience as only half the people would be clapping or gasping/oohing at some of the movements. I thought the dressage was pretty impressive especially as a lot of it was being done in the water (they flood the arena and make a lake in the second half).

After the show we returned to the VIP tent to wait for the horses to be ready in their stalls for a visit. We did this at the previous show and it’s cool, but not really very interesting. The horses have nice stalls, are well cared for, and very pretty. But they’re just horses in a stall. Don’t waste your money buying a ticket just to get the stable access. We bought the VIP tickets because we wanted the better seats, not for the chance to look at horse in their stalls. I can do that at home. 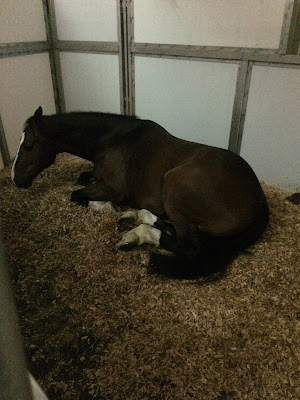 Overall, I would recommend going to see Cavalia. I really like Cirque de Soliel shows, and this one is  like Cirque with horses, so it’s right up my alley. I don’t know how much I’d recommend the VIP thing. Unless you cart a few hundred cokes back to your car, it’s hardly “worth” the extra money. But, if you like good seats and no line for bathrooms, it’s certainly enjoyable.