Coconino offered practice rounds on Wednesday and I signed up for another stadium practice. I wanted to spend as much time as possible jumping in that arena with hopes of not getting eliminated or last place again. We had practiced riding in the ring on Monday and Levi was still very convinced that demons might leap out of the surrounding and murder him at any moment. He got better over the course of the schooling, but I didn’t feel comfortable jumping as I wasn’t sure if it was open for jumping and I didn’t want to get eliminated before the show even started for a technicality. 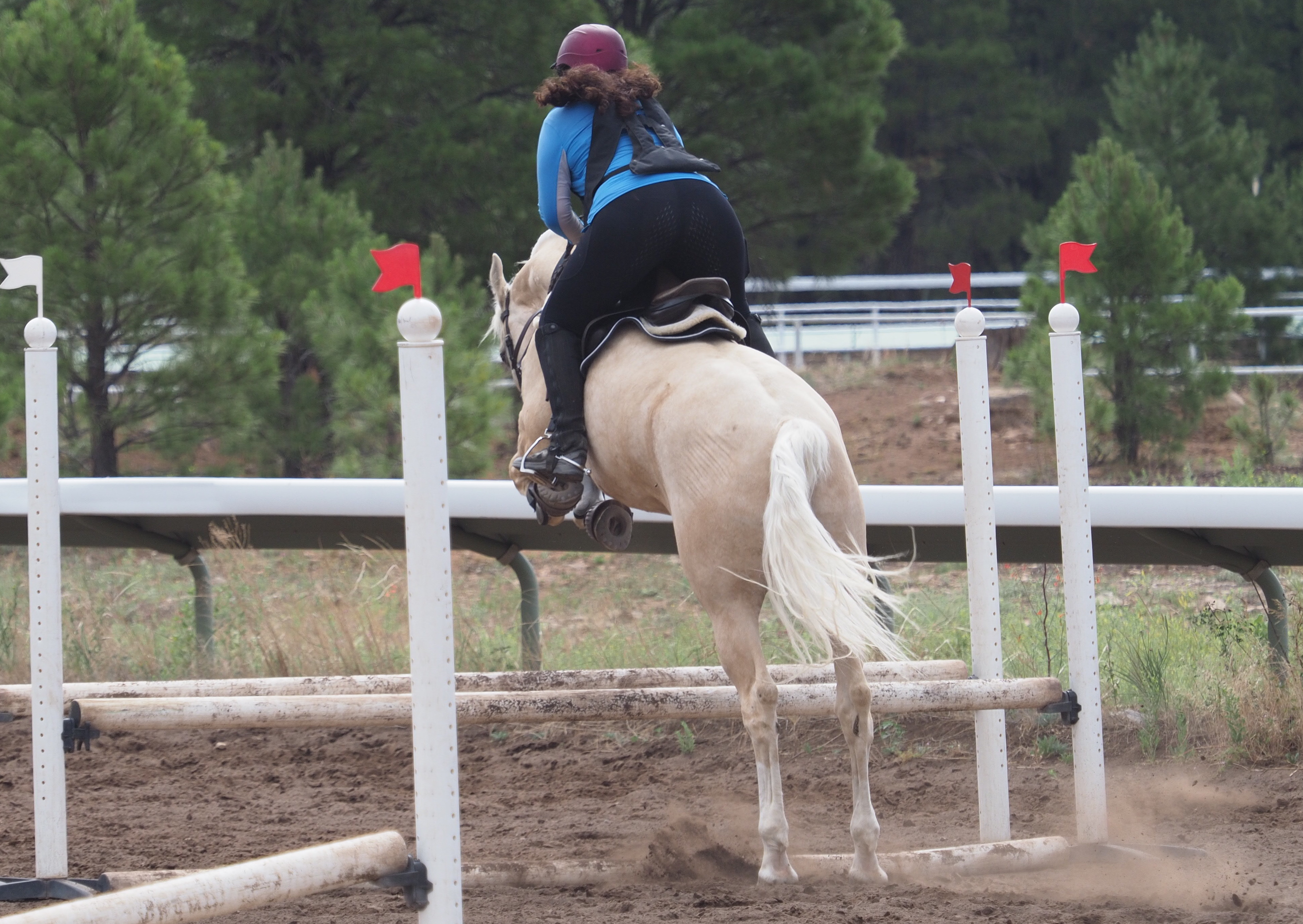 He warmed up in his usual manner: over-jumping everything. He had a bit more energy than I thought necessary, but he was being mostly good. Then it was time to go in.

Levi was way too fixated on demons to be bothered with jumping and he was not happy that I kept insisting he jump things instead of allowing him to flee in terror. 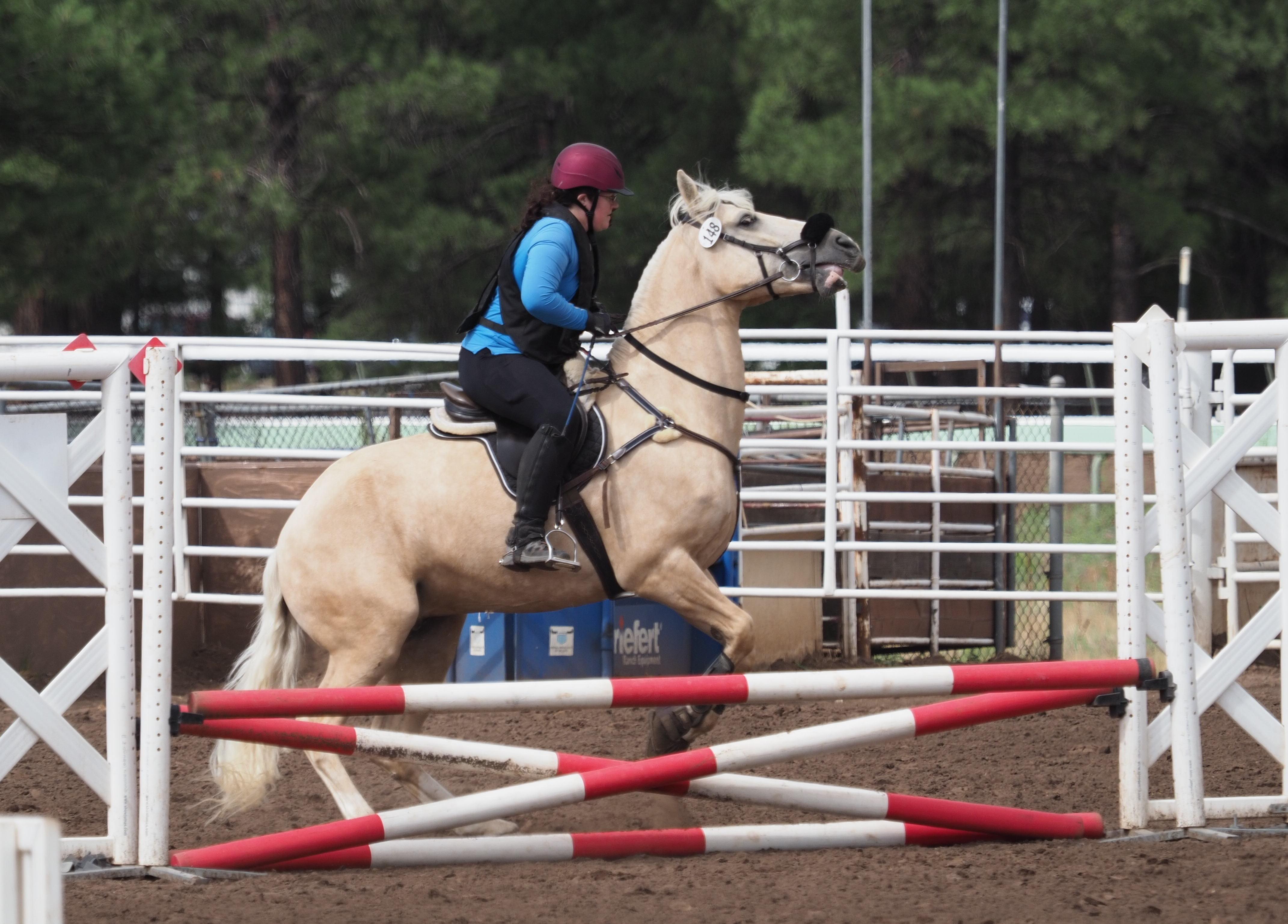 Around again and this time over it: 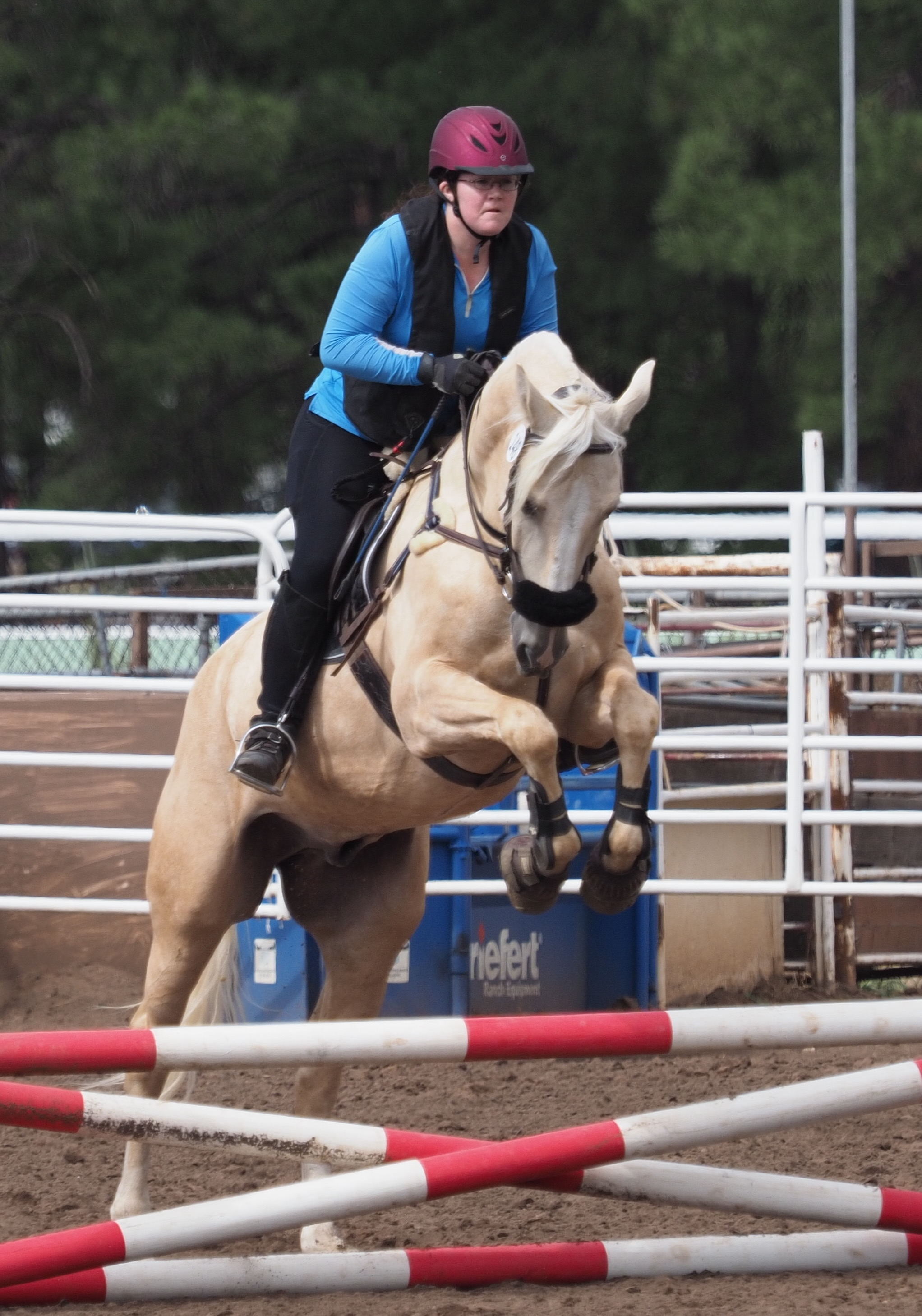 We came around to number two and he tried to refuse that too. But it was tiny so I just made him crawl his ass over it. 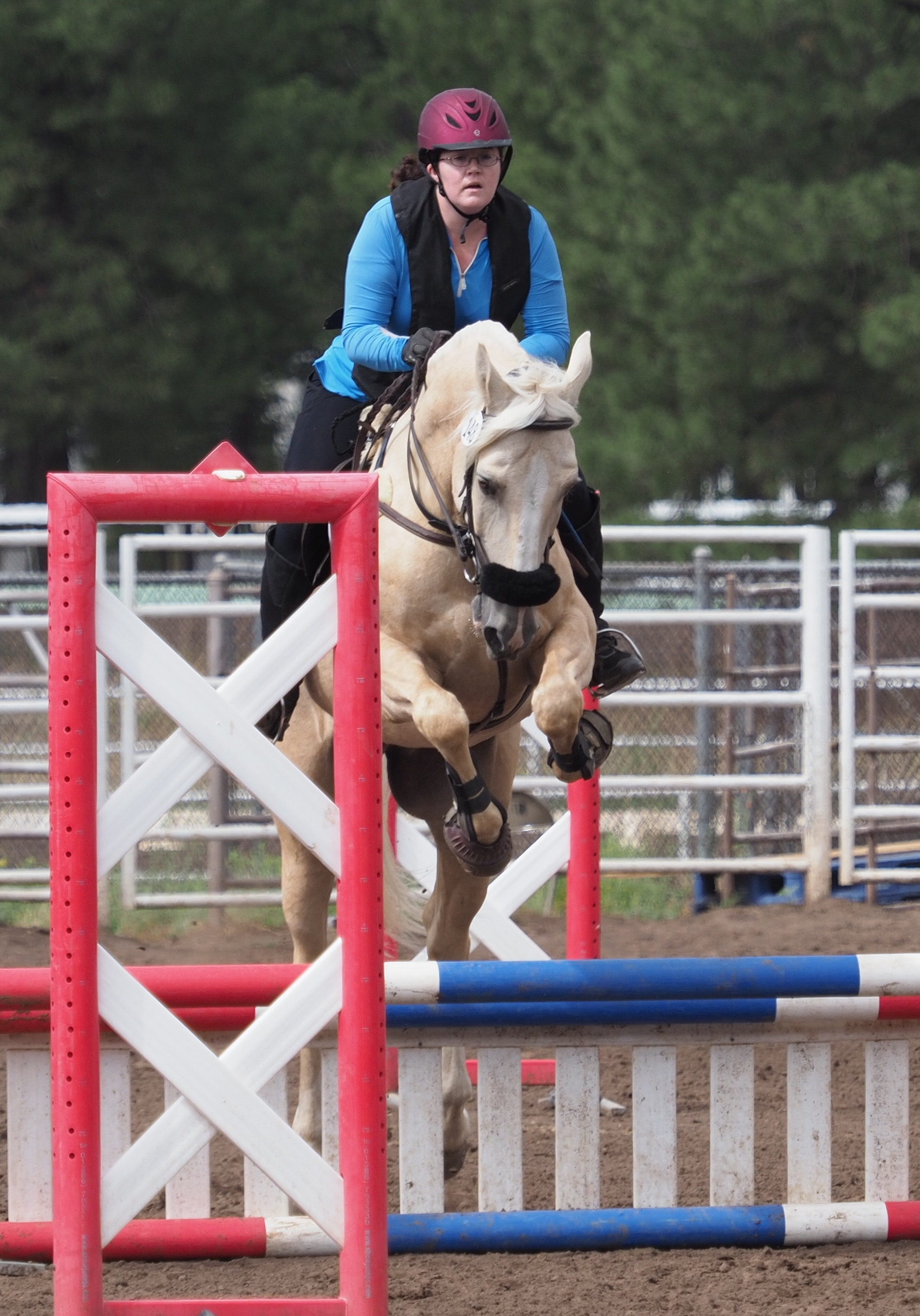 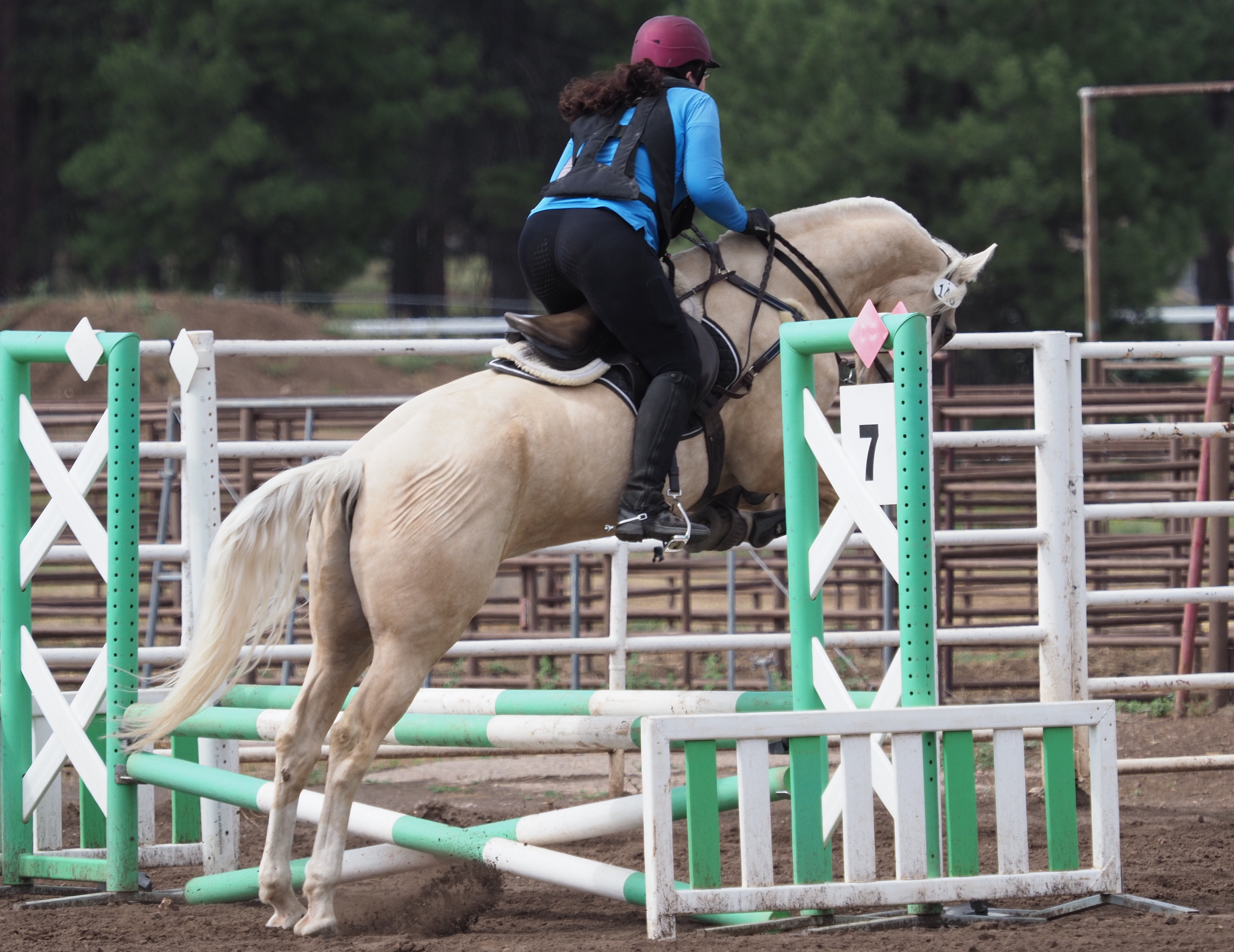 Stupidly close to the jump, but over it.

And then we were done. I was pretty pissed at him. I get it, the arena is terrifying. But we’ve now been in here multiple times. You need to get over it. Sadly, they were full for schooling rounds so I couldn’t do another one. Oh well, I figured we’d do what we could do on the day. No reason to worry about it. We had dressage to get through first.

Dressage was something else. I’ve never had to show in the rain. Levi does not like puddles. When I first got him, he’d throw total fits about having to cross water. During the winter, I spent some period of almost every ride getting off and hand-walking him through puddles as he tried to flee or leap them in attempts to not get his precious feet wet. We worked on that a lot, but he still didn’t like puddles. I could sort of force him though them, but I didn’t think stopping, leaping, and then high-stepping through every puddle was going to go over well in the dressage arena.

The footing was gross. Everything was mud and good portion of that mud was under water. Not little puddles, but big lakes of water covering entire chunks of the arena. Warm up was on the track and I was doing my test in the same arena my husband had done. I could see that the arena was about 1/3 under water and there would be no way to avoid the water. So I set to work. Levi didn’t want to go into the first puddle, but I made him. And then he just sort gave up fighting about it. I rode all over the track seeking out the biggest puddles and making him go in them. Every new puddle caused a moment’s hesitation, but he didn’t stop. Then I started making him do difficult things, like canter transitions in the puddles. 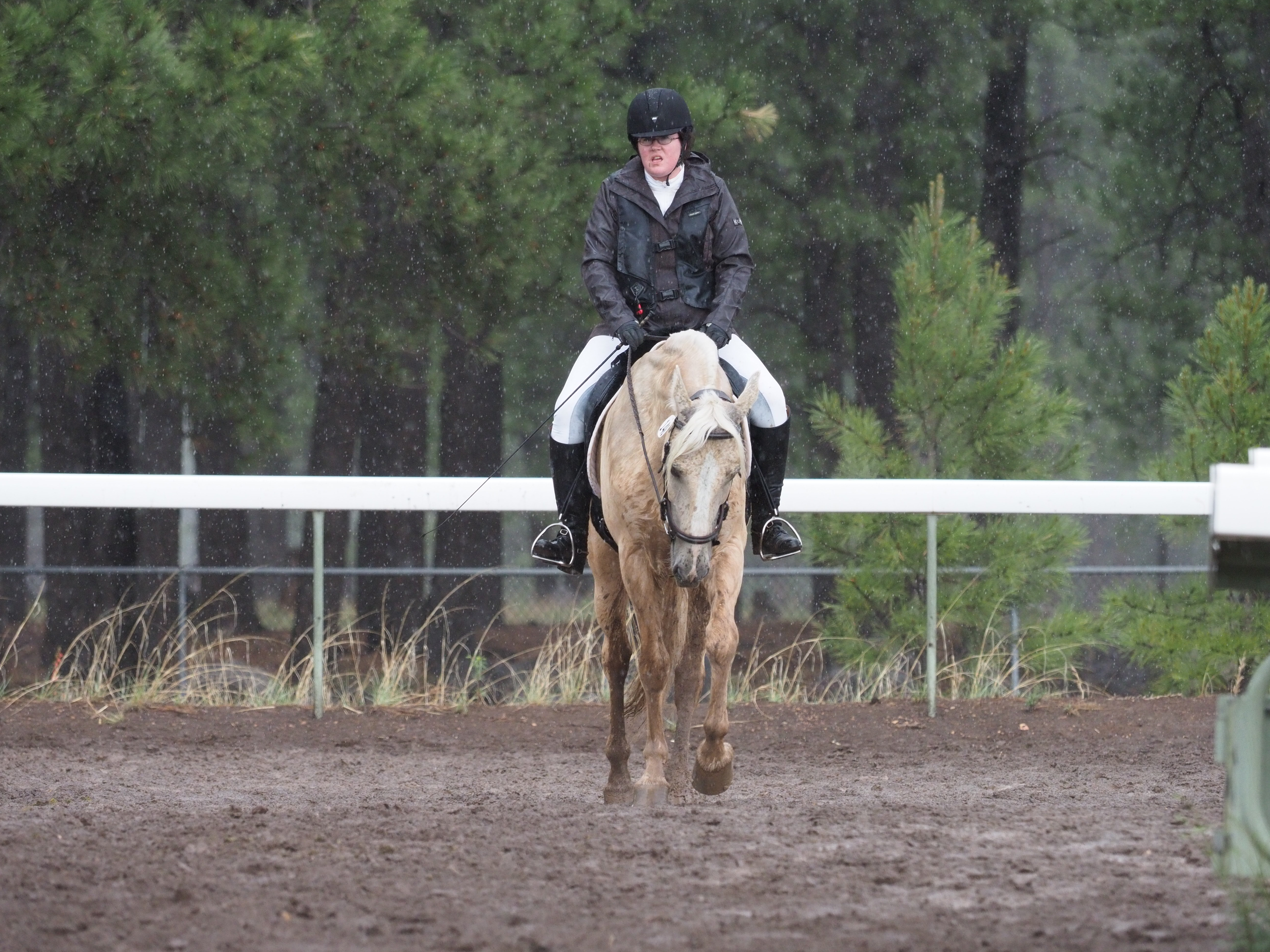 not sure which of us is more miserable

I don’t know if the puddles just kept us occupied or if being soaking wet is somehow Levi’s secret preference, but he was being so damned good. I don’t know where this horse came from, but I would like him to show up again some time.

I had originally planned to just ride my test in my rain coat, since it’s allowed in the rules, but it turns out my rain coat is only mostly waterproof.

I decided that, if I was mostly wet anyway, I might as well go for broke and wear my coat. Why not fully commit to this nonsense. As soon as I was allowed in to trot around the outside of the court, I went straight for the puddles. As I did this, the rain decided it’d be fun to come down even harder. Because why not. 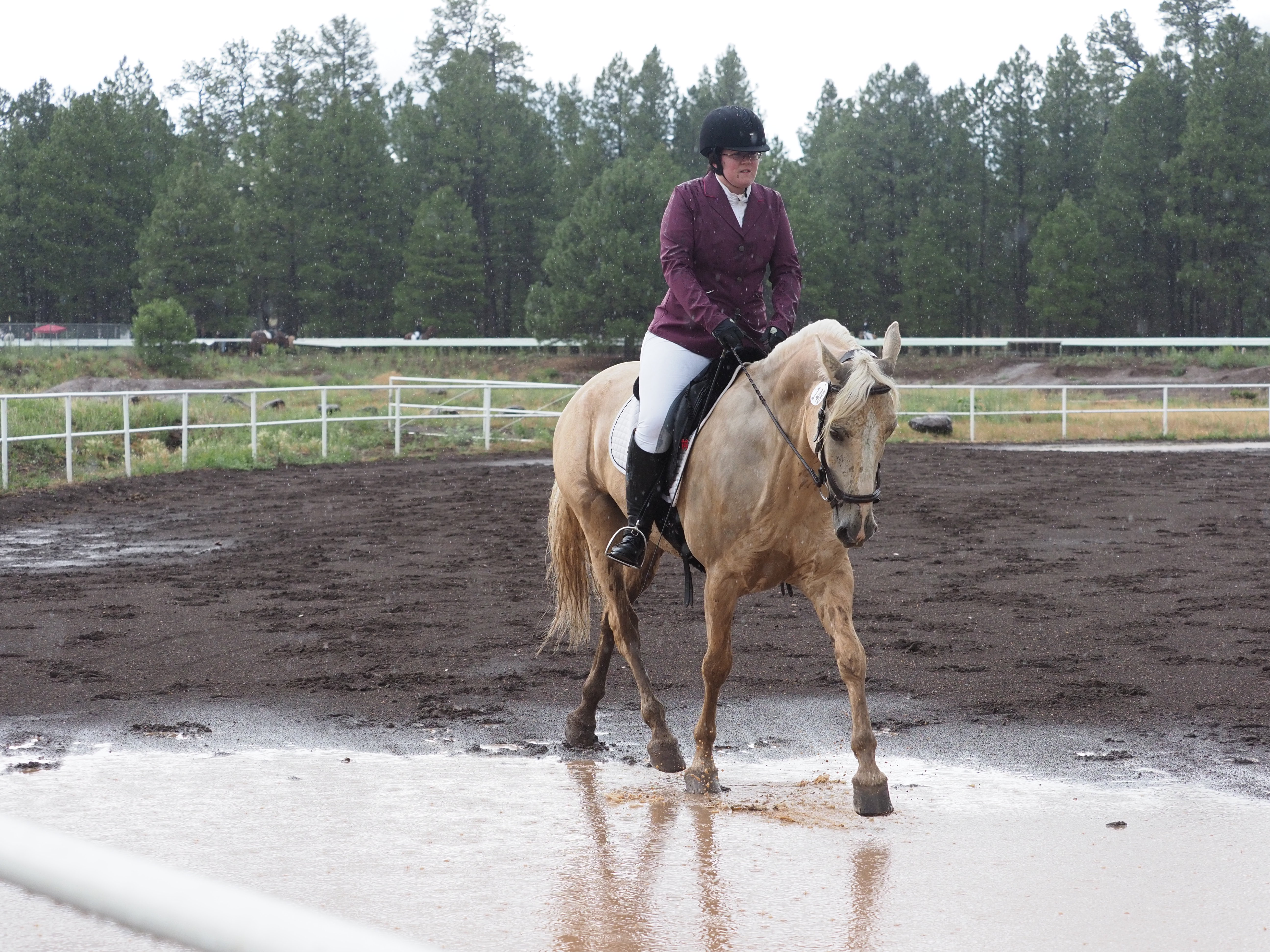 Is this dressage or horseboating? 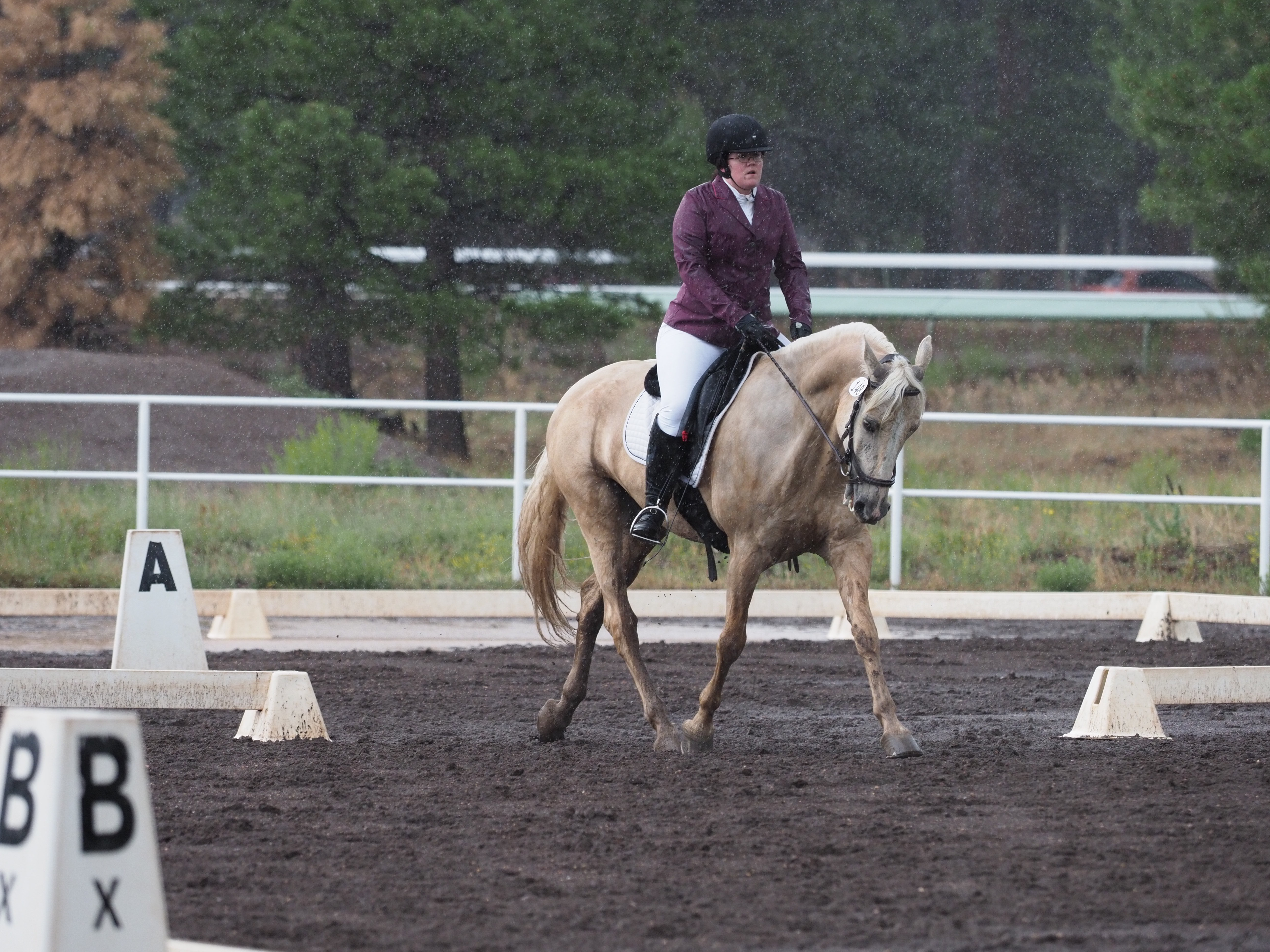 It almost looks like we know what we’re doing 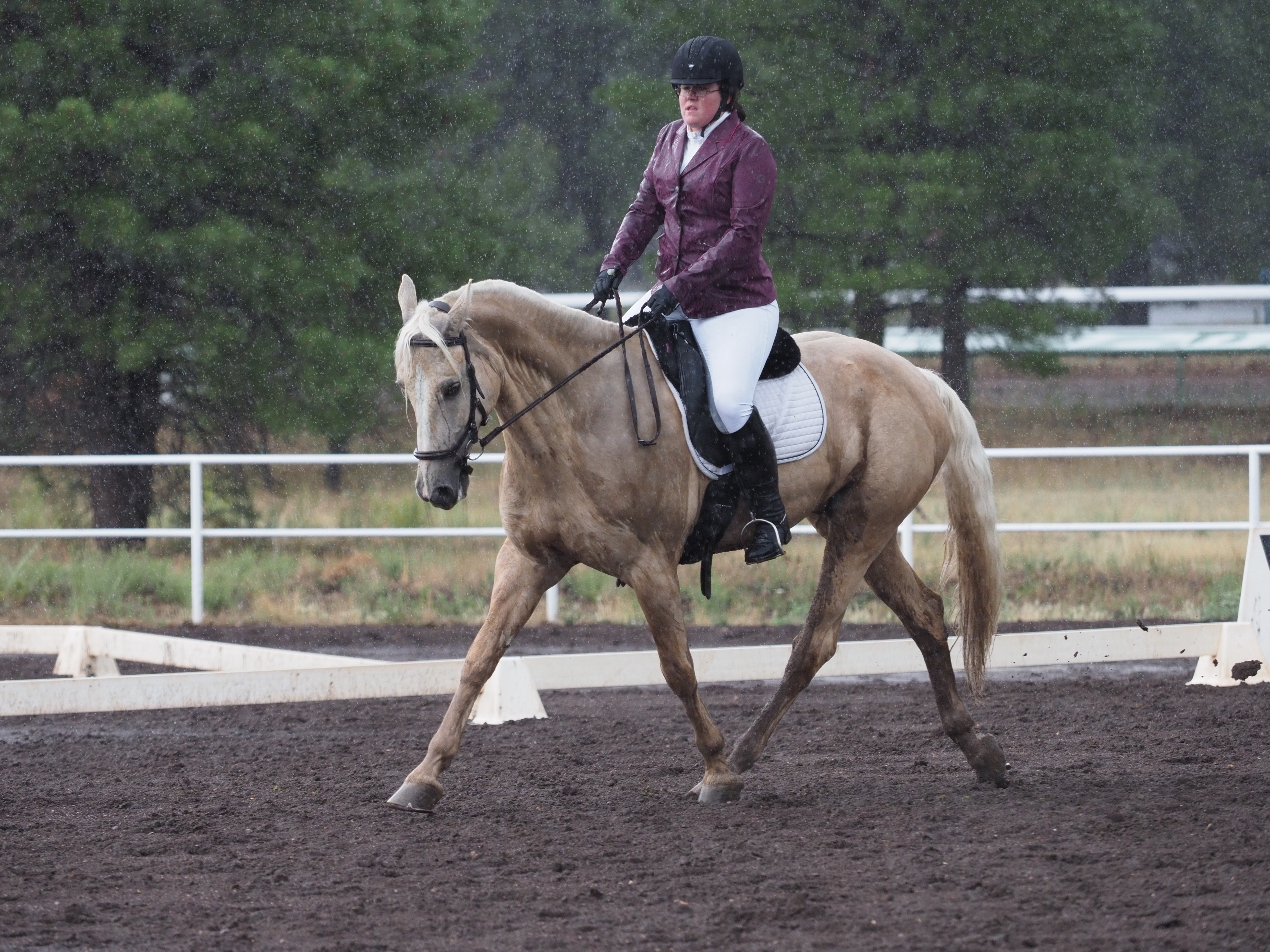 Stretching to the contact?! Where did this horse come from?

3. Between K and A Working canter left lead
Judge’s Comments: (no comment)
Score: 7.0

There’s an angry face there, but this is one of the quietest canter departs we’ve ever done. 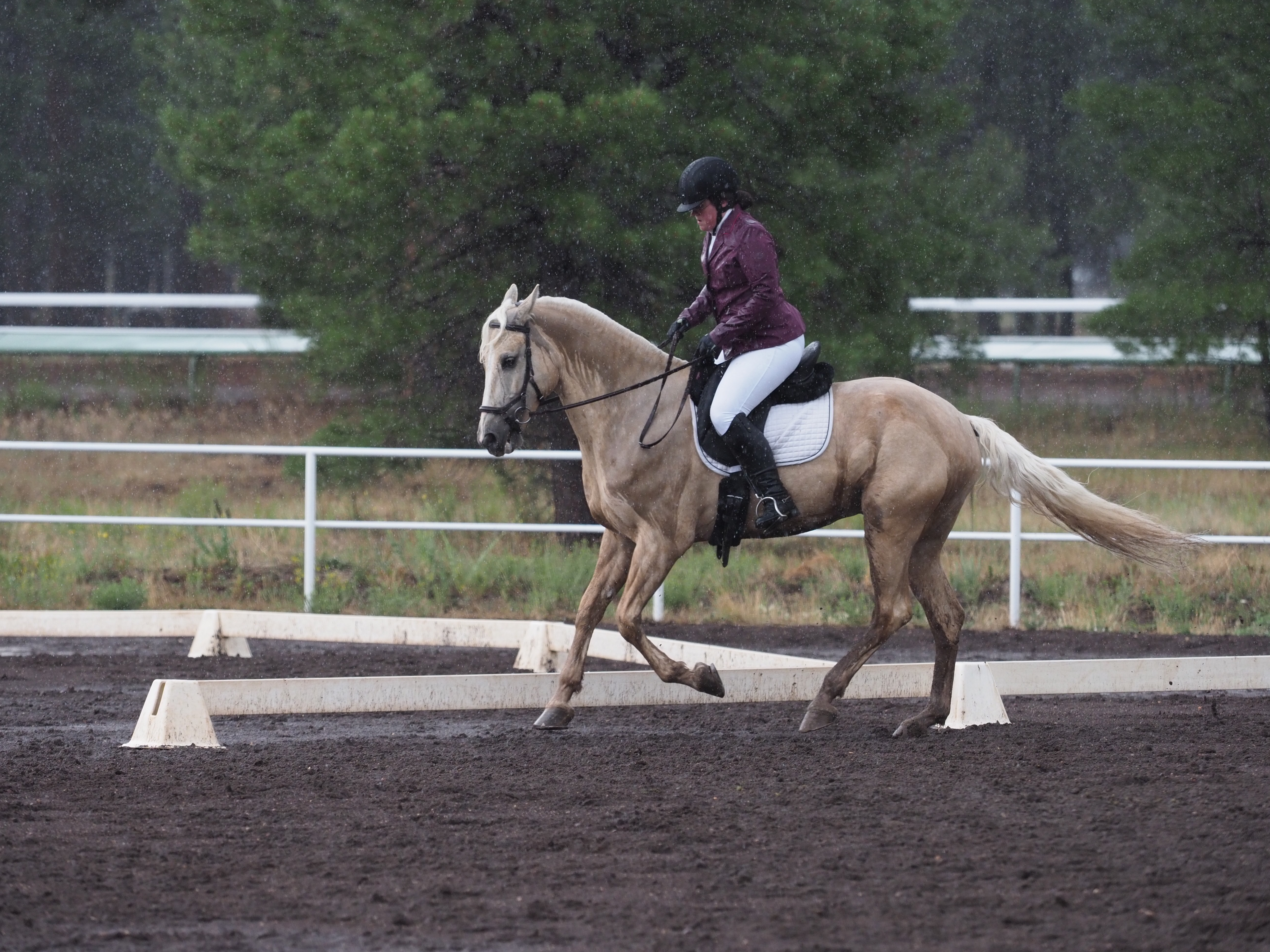 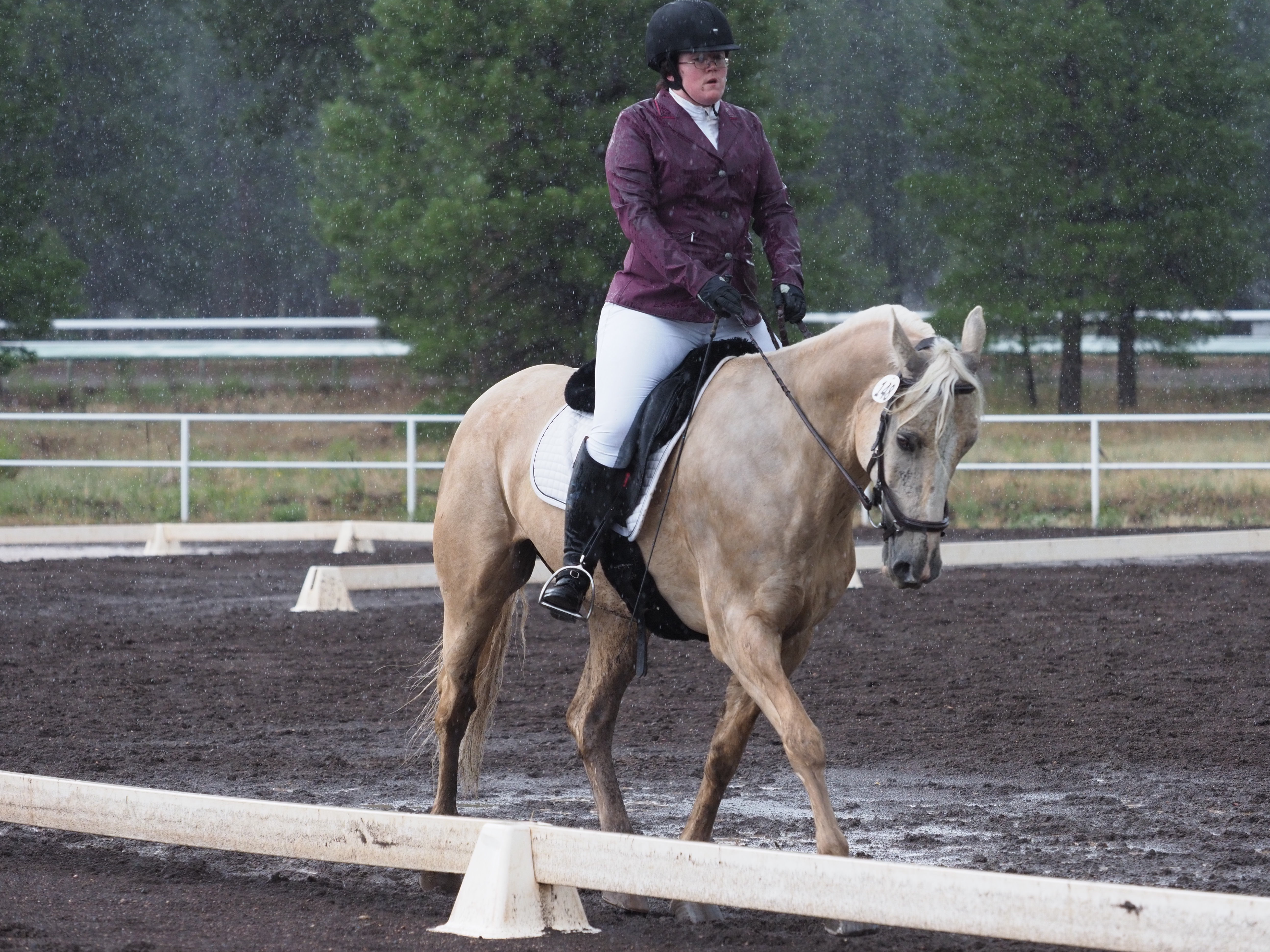 Seriously, who is this horse? 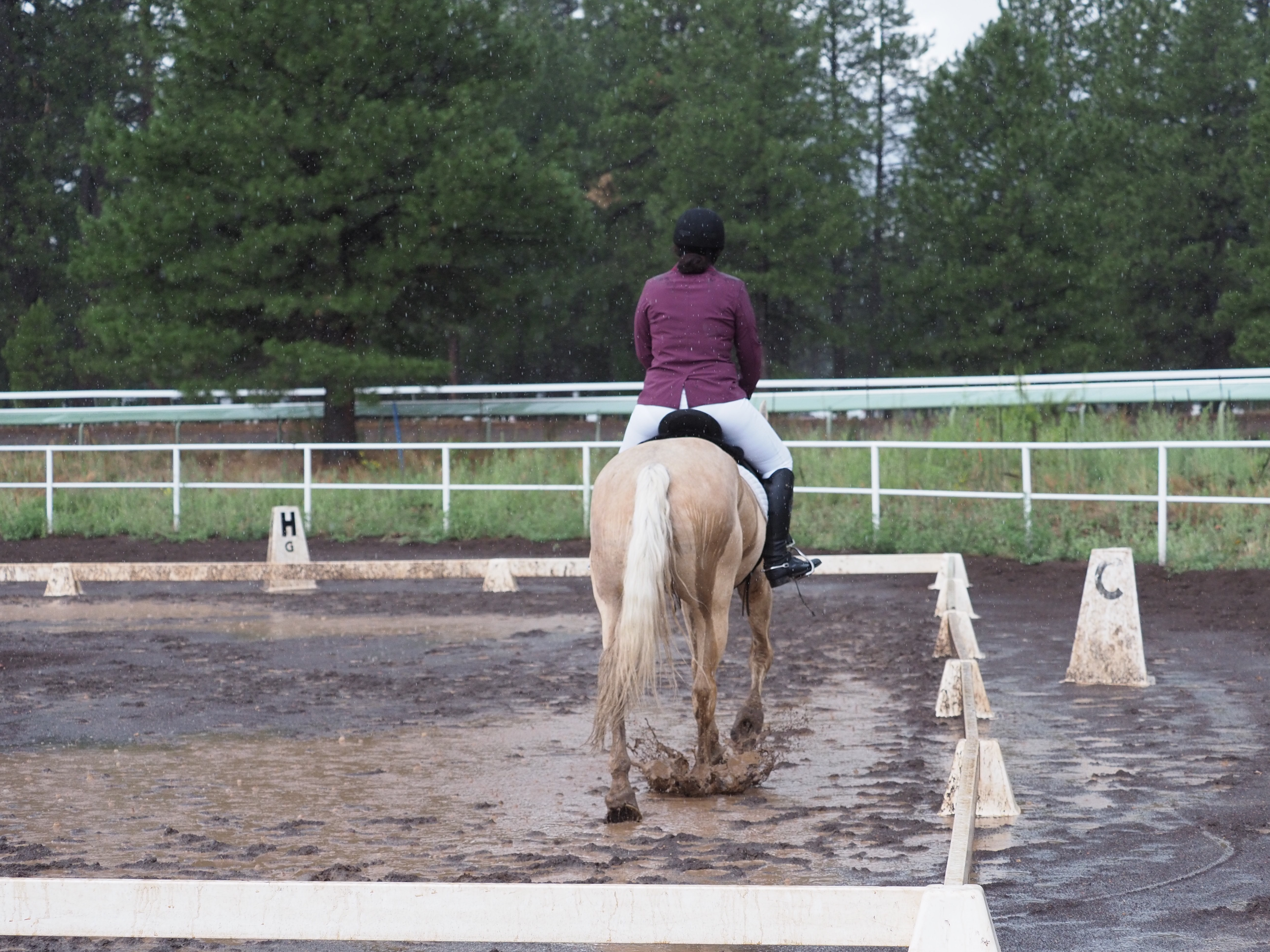 You can see how hard the rain is coming down as it splashes off the puddles! 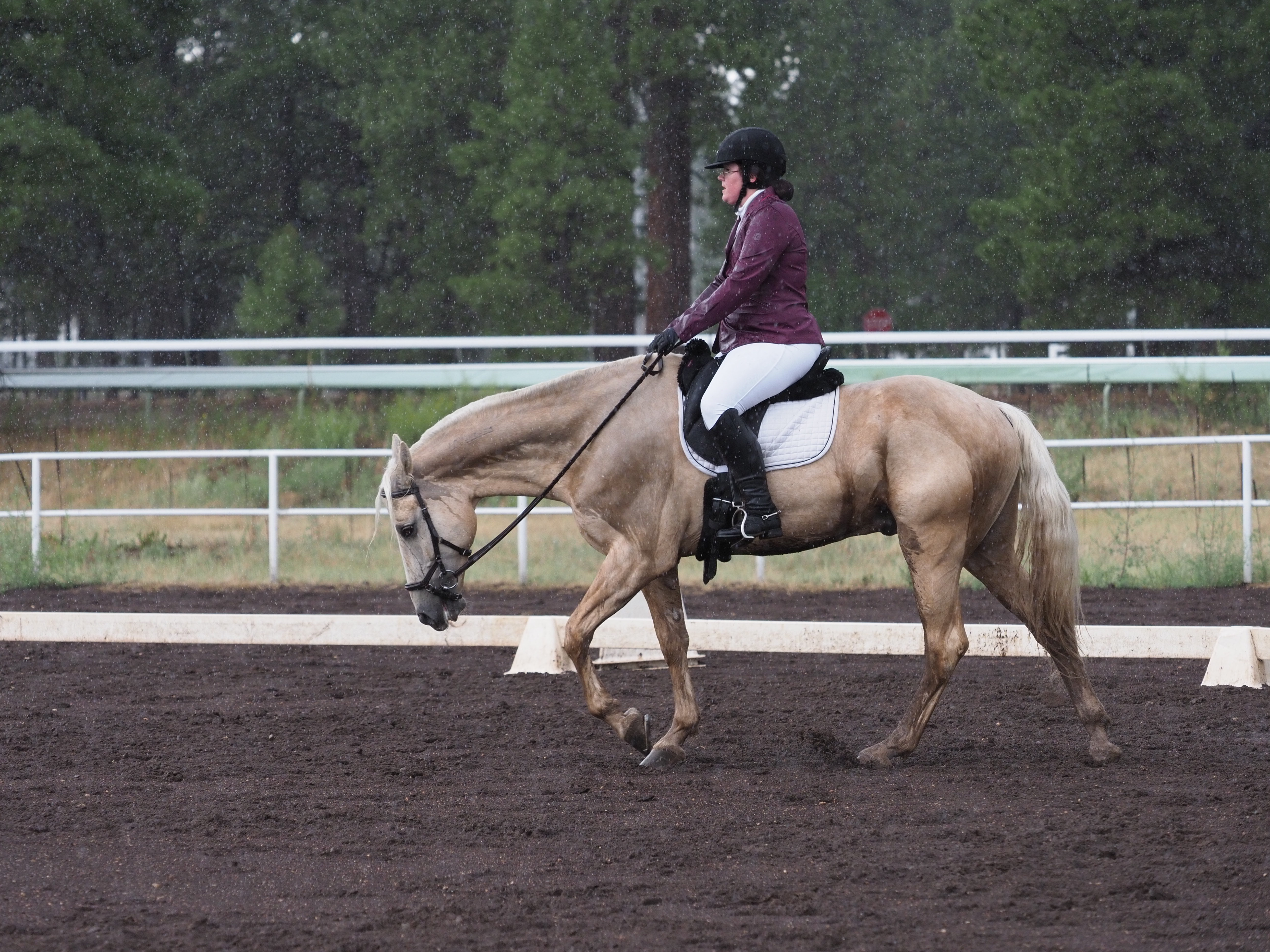 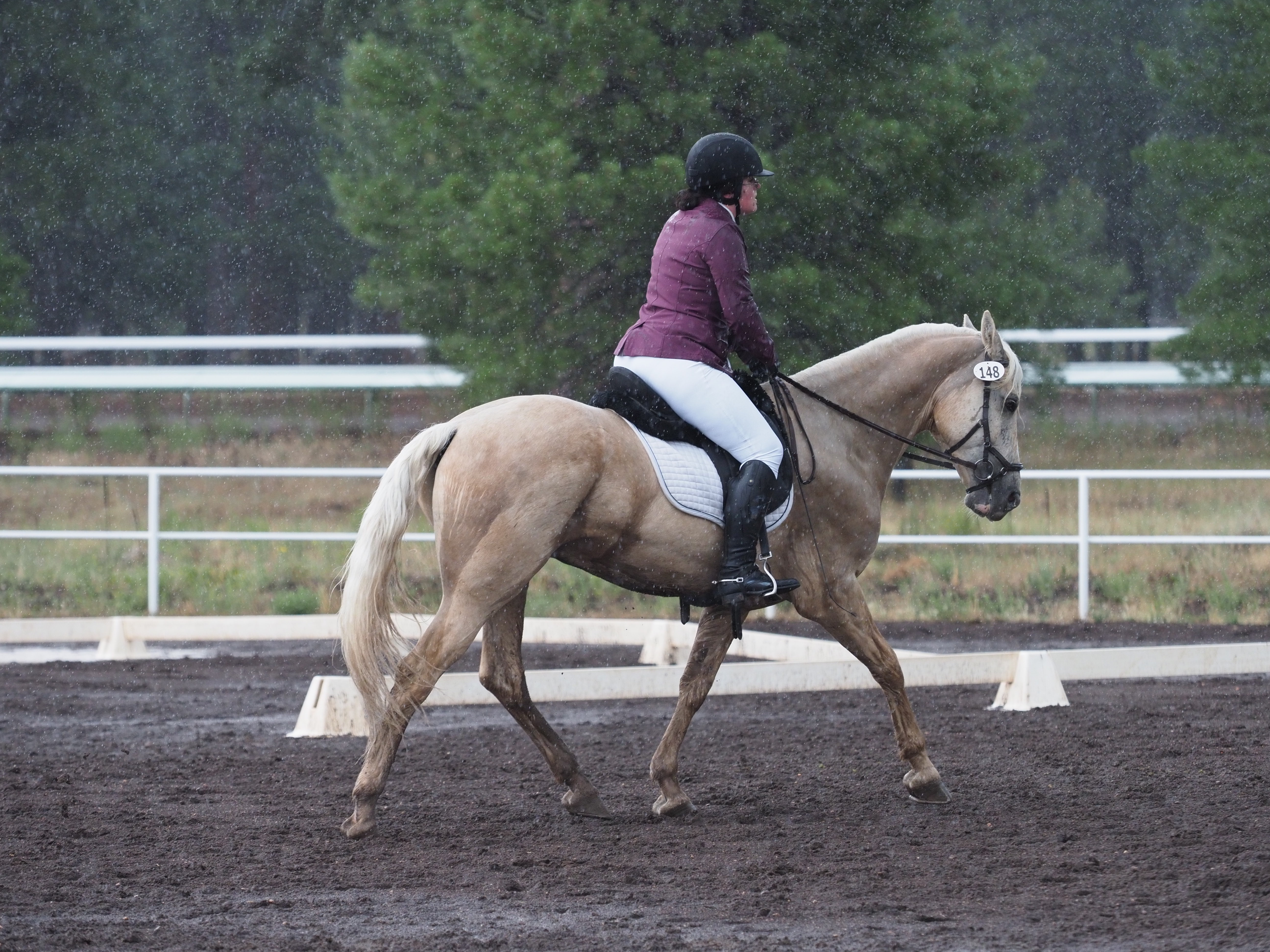 10. Between H and C Working canter right lead
Judge’s Comments: I can’t tell what this comment says. Either “poked nose” or “pulled more” or something else entirely
Score: 6.0 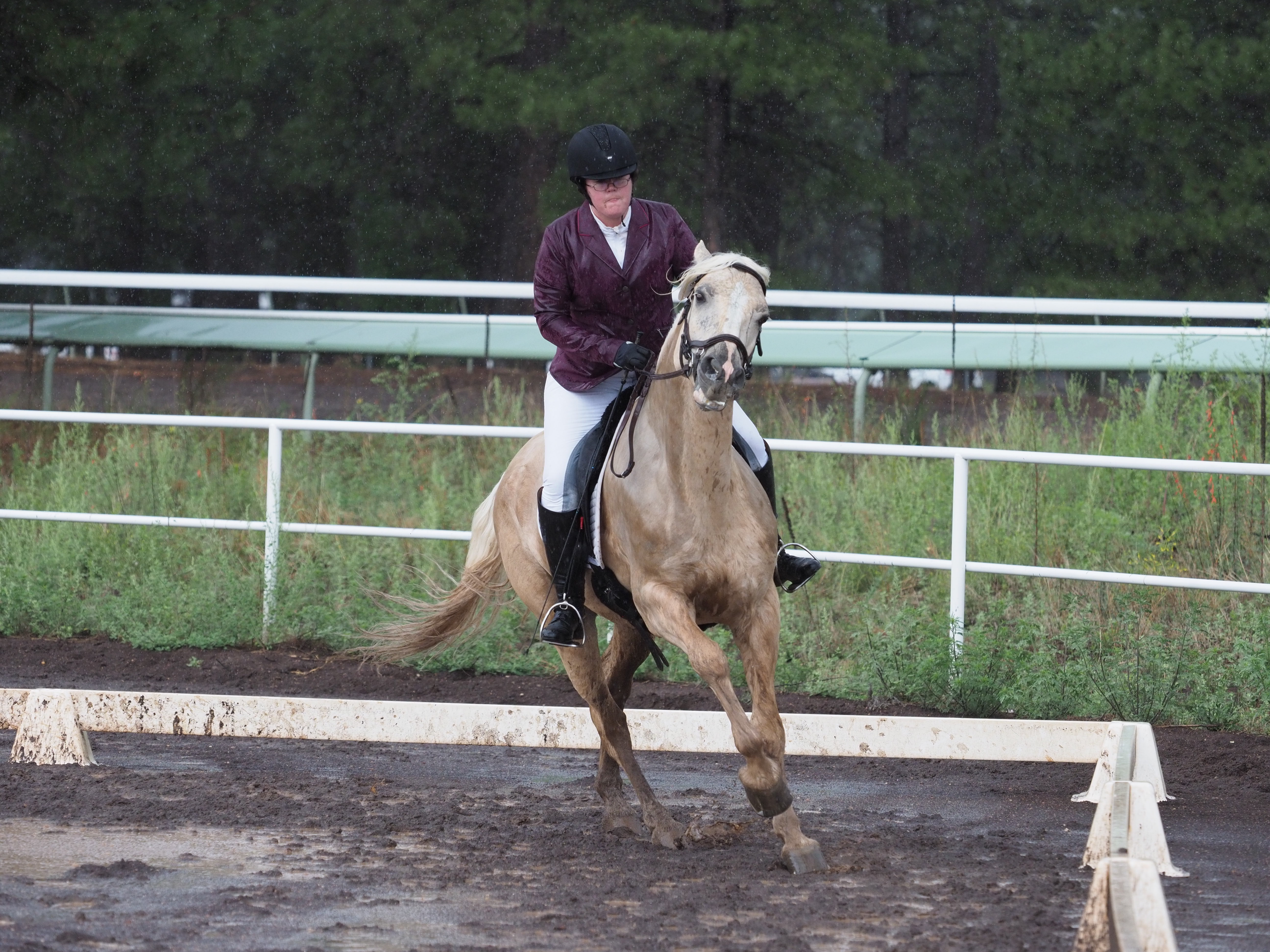 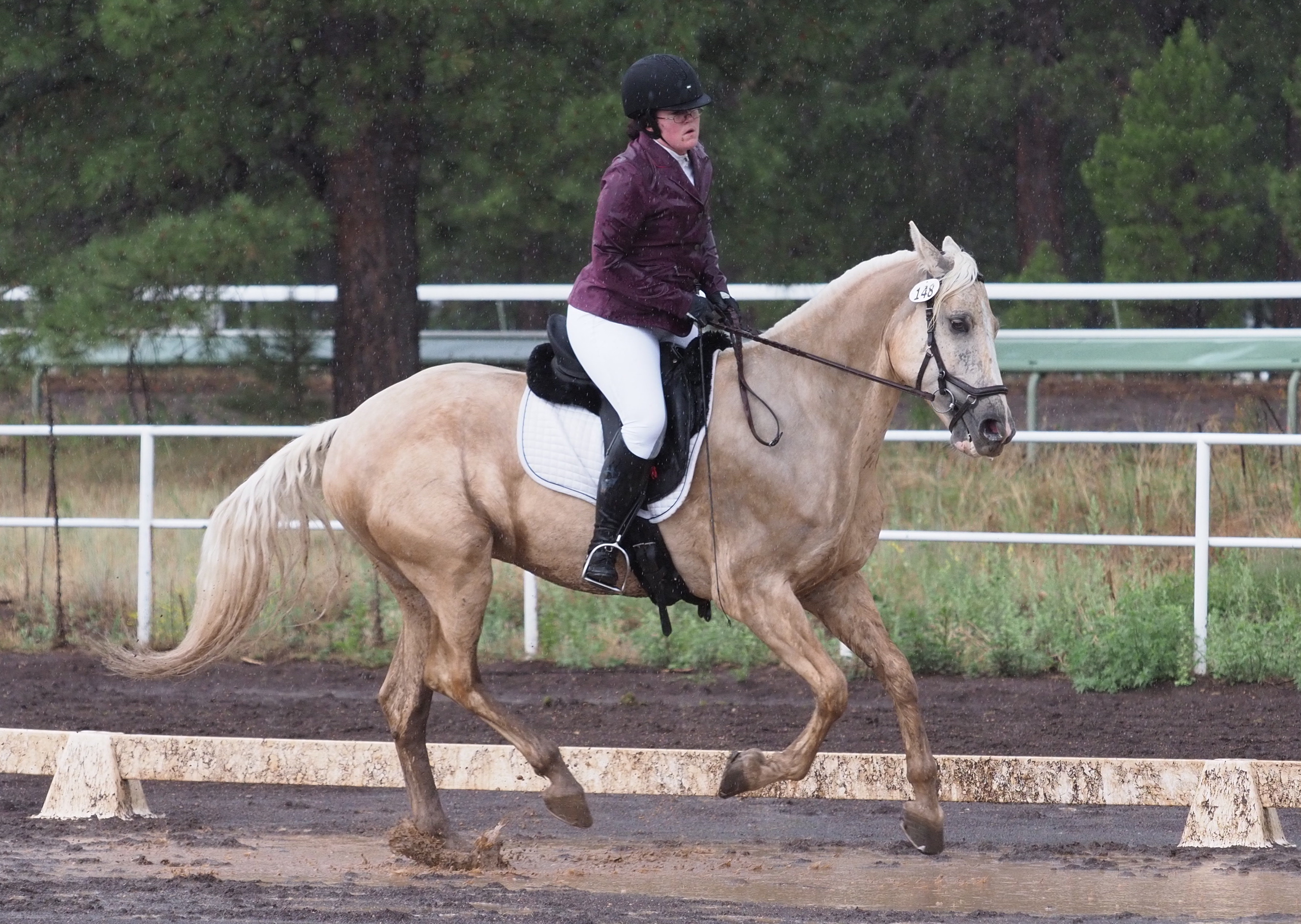 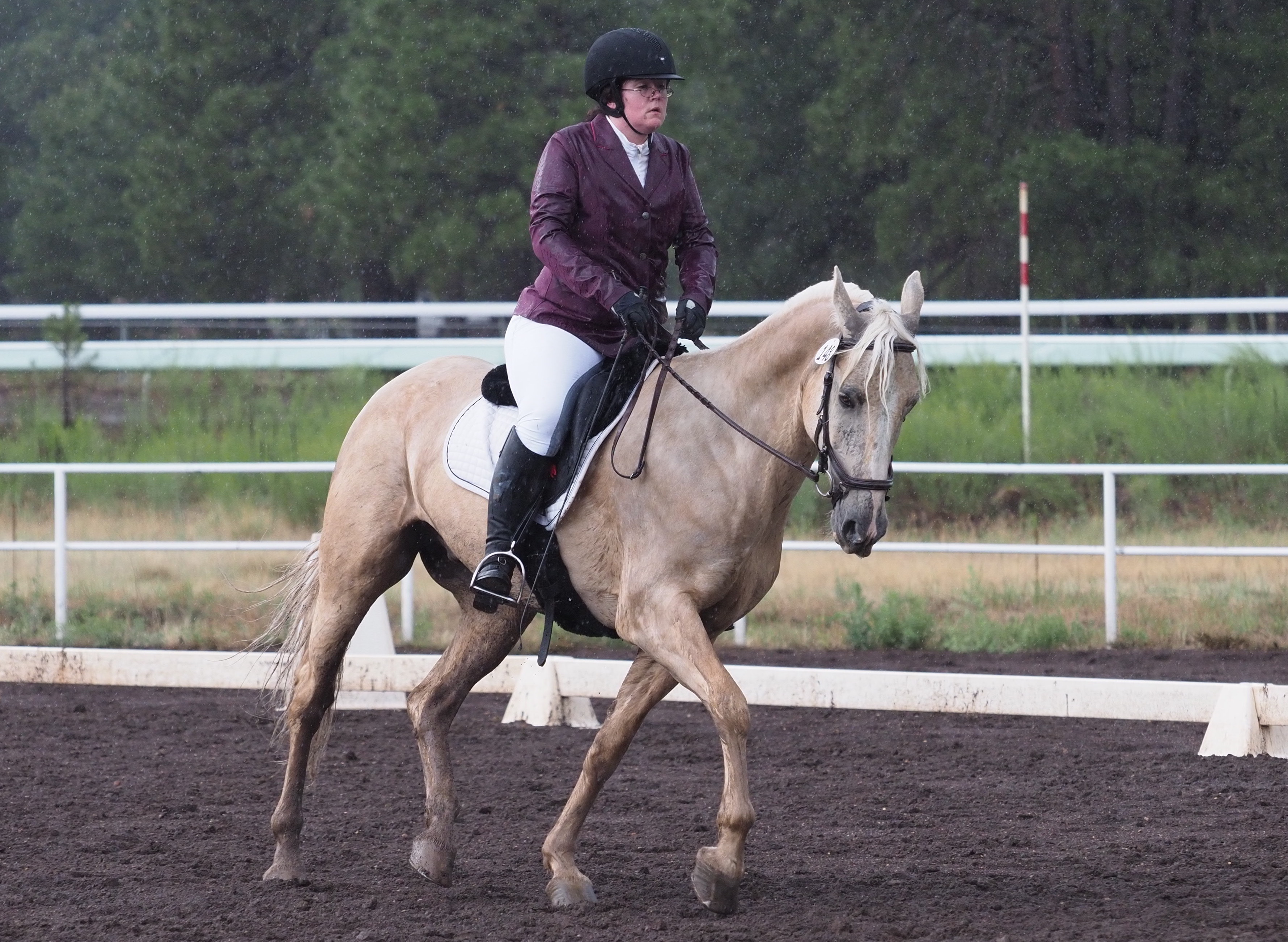 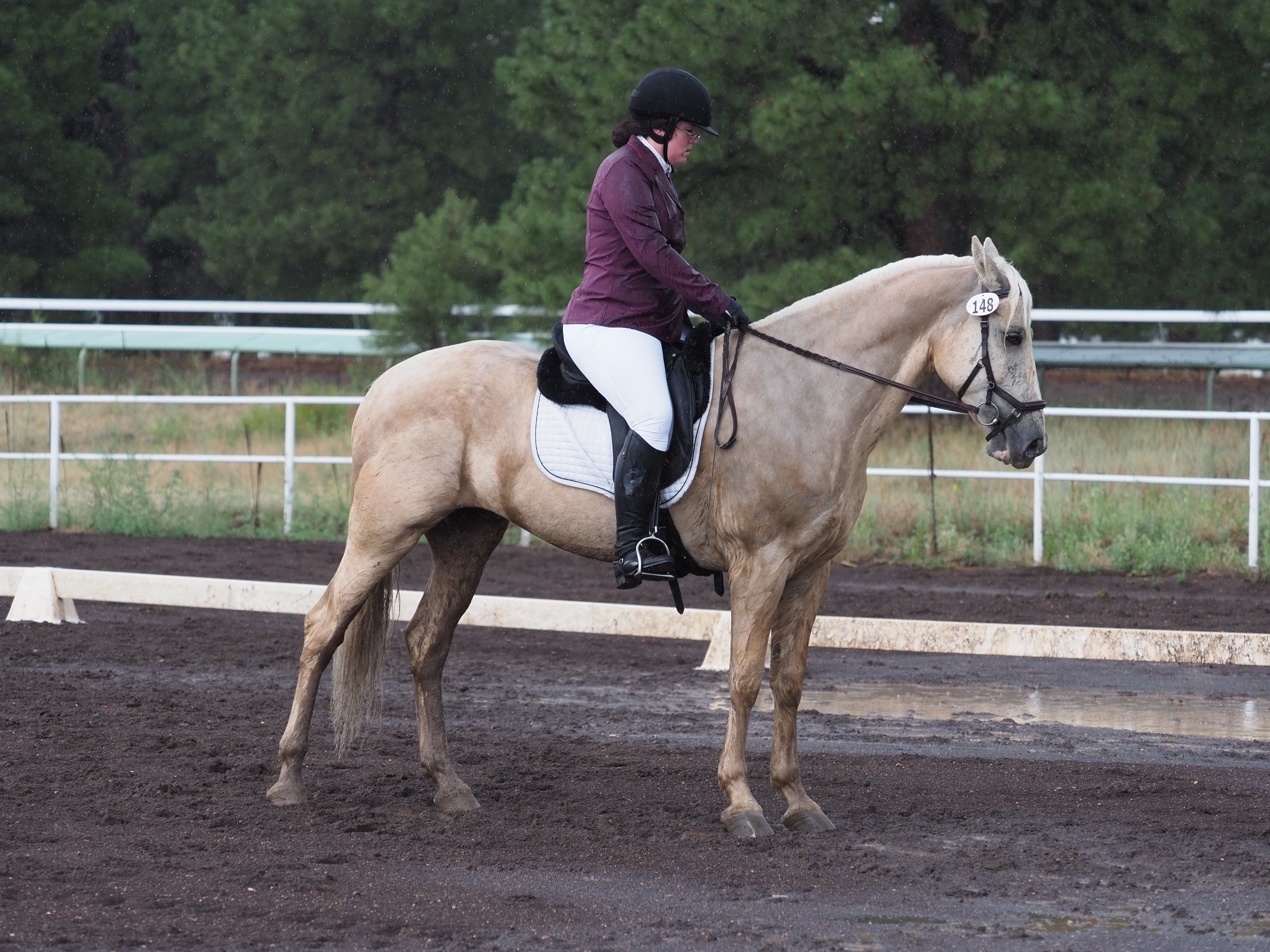 Not sure this deserved an 8, but I guess it looked square from C

I finished the test knowing it was one of the best we’ve ever done. He got lots of pats and praise. My husband and I were both commenting on just how good he was and how I should just ride all his tests in the pouring rain. While I was super happy with him, I’m generally incapable of thinking of myself as having done well. This was also the same judge from my husband’s ride – the one who had given him the lower (worse) score. However, I’d watched one poor horse have a fit about the puddles and go backwards for part of his test and another just decided he was done with this mud crap and jumped out of the arena. I figured other horses might have some water issues too and we’d get a middle of the pack sort of score. Imagine my surprise when I looked at the scores online and we were in first place! 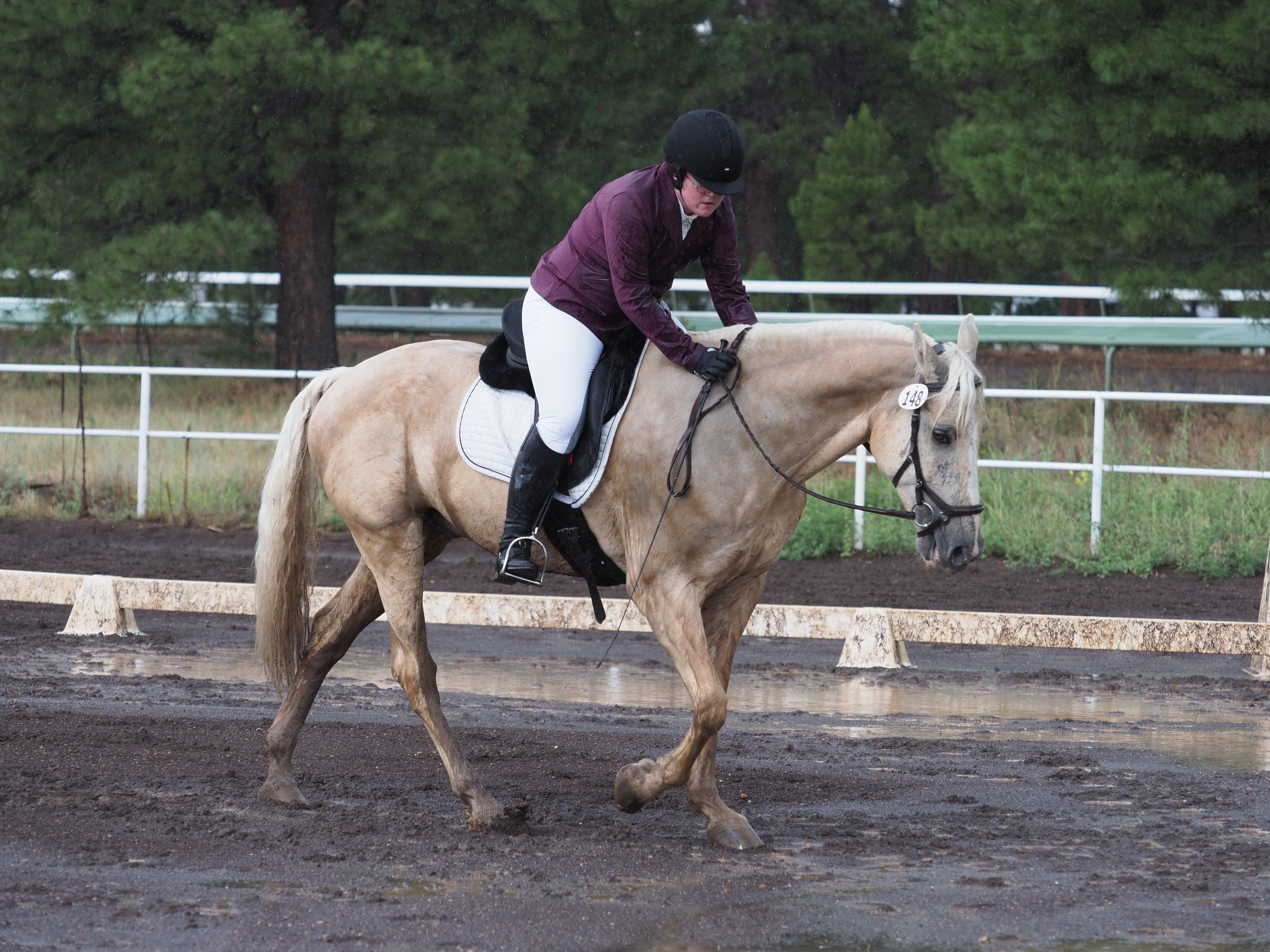 I was so happy with him, the score and the placing were just bonuses. He really surprised me with how obedient and willing he was despite (possible because of) the rain. I would not have been surprised to have been the person getting jumped out of the arena due to puddles. Putting in such a steady, clean test was enjoyable. Coming in first was pretty awesome too.

I was muddier than I normally am coming off of XC. I actually just went and hosed my boots down to get some of the mud off. There wasn’t any way I could get them more wet. 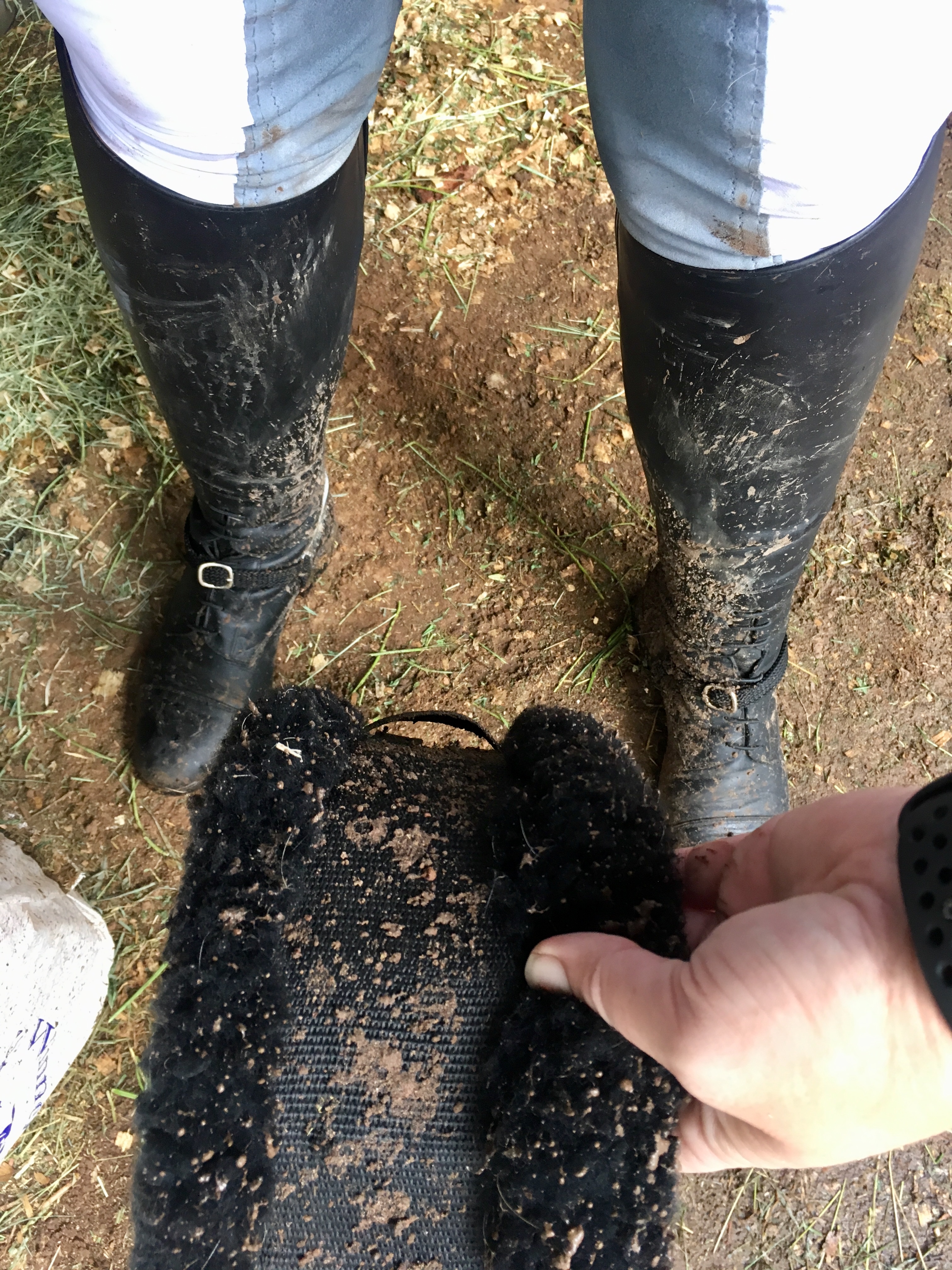 I then proceeded to clean my poor boots and we took everything back to the hotel to dry. Camping is great, but there’s nothing like a hot shower and a hair dryer for your helmet after a day like that.