Now we get to the fun part. Although I don’t have a ton of experience, I really do like doing events in the right order: Dressage, then XC, then Stadium. Cross country on Friday was especially fun with my husband doing the long-format.

For anyone not familiar, here’s a quick run down of the long format. You start with section A: roads and tracks. It’s done at 220 mpm which is a fast trot pace with maybe a little bit of canter thrown in. For BN, this section was 2400 meters long and they had 11 mins. Then 1 minute of downtime before Section B: steeplechase. Steeplechase is done at a faster pace than XC for that level. For BN, they were doing 400 mpm over 1200 meters with 3 jumps. You go straight from B into C, but there is an area after B where you are allowed assistance. Your crew can help you change a broken piece of tack, put a boot on if you’ve lost a shoe, or just give you a drink. Section C is another roads and tracks, but it’s longer. For BN, it was 3740 meters and 17 minutes. Then you get a 10 minute Vet hold before section D: cross country.

We had a lecture earlier in the week on the vet hold. It included such directions as line up four buckets then have your head groom hold the horse between the buckets while the assistants sponge ice water onto the horse from each quarter while the rider sits in their chair and has a rest and a drink. Umm, okay… there are two of us. The woman running the lecture offered to round up some kids to help us and we both declined. Eugene barely tolerates me touching him, he wasn’t going to let strangers do it. We’d be fine. The lecture also included the constantly repeated refrain that you have to scrape horses after sponging them to cool them. This is not true. It hasn’t been true for years. The USEA even advises that you don’t need to scrape. Applying cold water cools the horse. Leaving it on continues to cool the horse even if the water does get warmed by the horse’s body heat. Even in humidity. Apply as much cold water as possible. Scraping only slows that down. /rant over

Anyway, you come in to the vet check and the vets do a temperature, heart rate, and respiration check. Then you go and sponge the horse with ice water, fix any tack or shoeing issues as necessary, and re-present to the vet for another check and a quick jog after about 6 minutes. Then you get the rider back on and start walking down to cross country. The vet check area at Coconino is a bit far from XC so they gave you a few extra minutes for that. Those 10 minutes go by fast. After cross country, you come back to the vet box for another check of vitals before you get to take the horse back to stabling.

The BN course, like the rest of Coconino, was technical and tough for the level. Luckily, we’d fixed my husband’s cross country issues in schooling on Sunday and it was a drop down in level so we had no real worries about it. Coursewalk is here if you’re interested.

I know people prep and condition their horses before doing a long format. We had only decided to even go to Coconino a few days before closing, so we’d certainly done no conditioning. You end up trotting 3.8 miles and galloping 3/4 of a mile (Novice and Training do more distance) all before running a normal Cross Country course. While Eugene has done endurance in the past, he hasn’t done any recently. When we drove roads and tracks, I was getting a bit concerned. I kept asking my husband if he thought Eugene was actually prepared for this. He was like, we go and trot and gallop around the winery, we’ll be fine.

People also like to write down all their times either on their arm or on a spare arm band. My husband, didn’t do that either. He had wanted to edit the code for our watch app to support the long format, but didn’t have time. So he just memorized his times and went with that.

I packed a bag full of supplies and went over to the start box with them. We stood around as a few people headed out. Then they were in the start box. 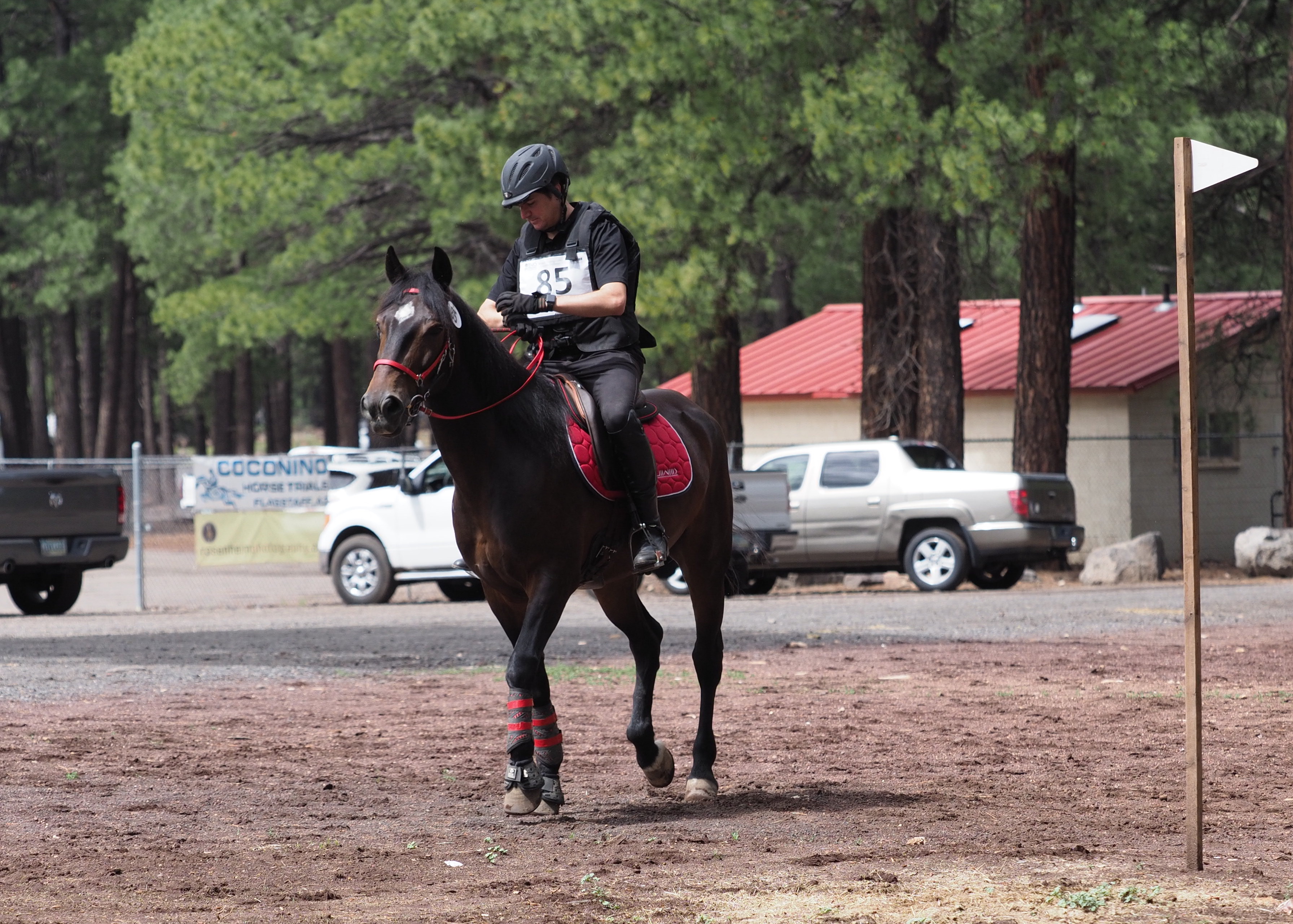 He did at least use a stopwatch

And they were off. 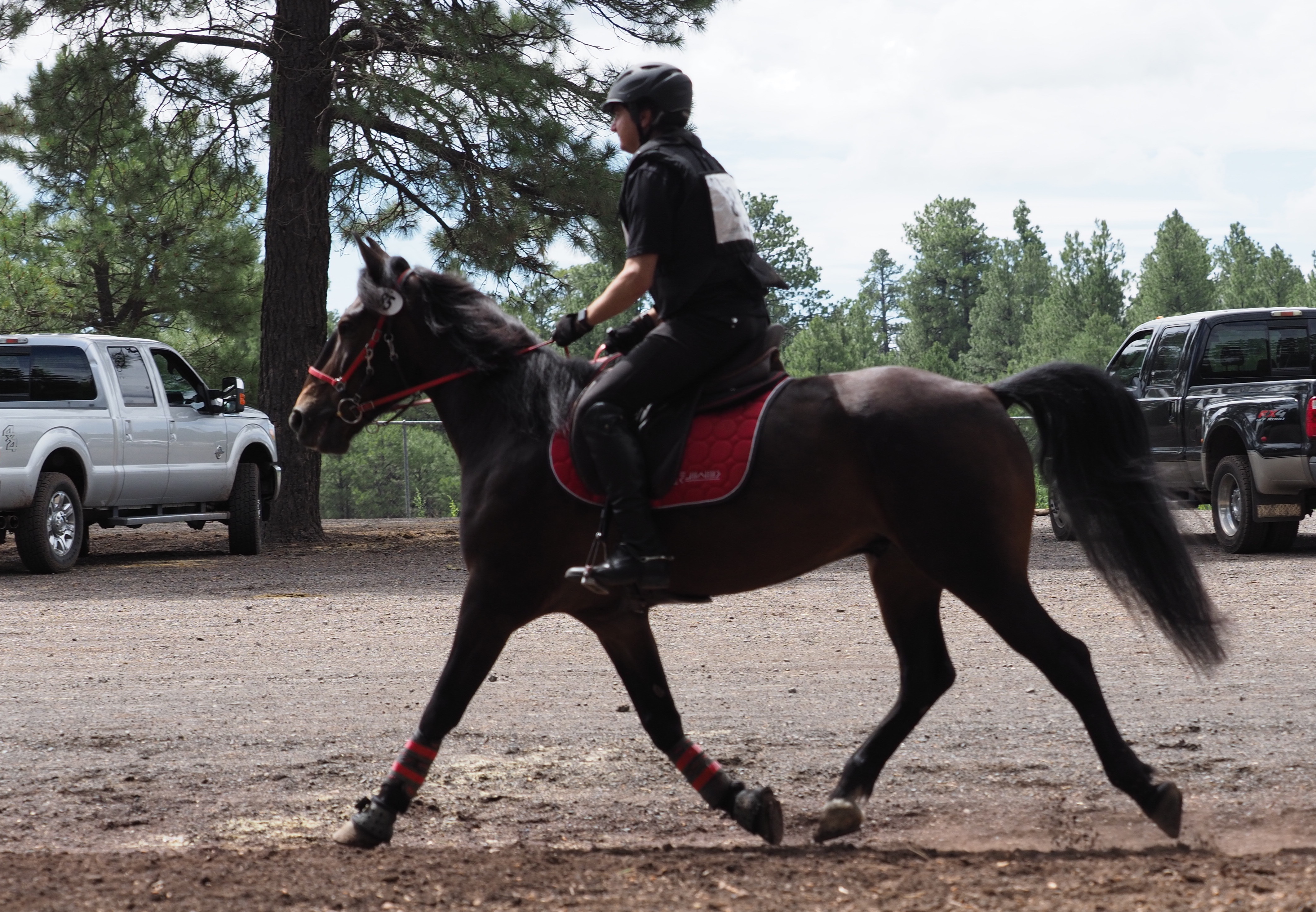 That little horse just loves a good trail ride. After they disappeared down the road, I walked over to the assistance area. From there I could watch them do Steeplechase and then check Eugene for missing shoes before they carried on with phase C. My husband mostly trotted out on phase A, but did a bit of canter on the way back to get Eugene’s cantering muscles warmed up before Steeplechase. Despite all the rain, the footing on roads and tracks was good; some of it was on actual gravel roads and the rest was pretty well wood chipped. Ten minutes later I looked over to see them in the startbox for steeplechase and then they were off. 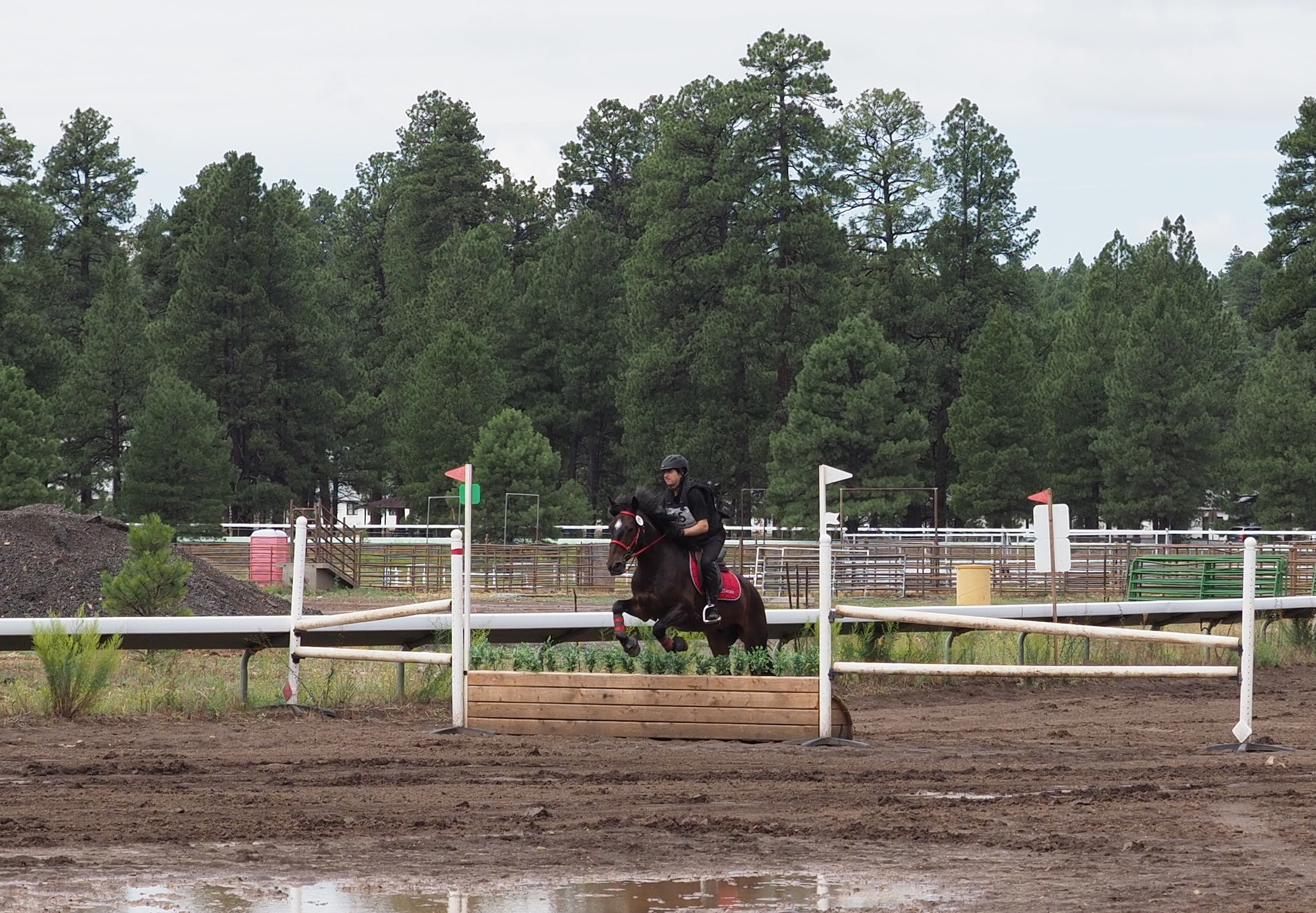 Although my husband was lucky enough to have the rain stop for his run, everything was still soaked. The whole track was a sort of water obstacle. Although it was half underwater, the footing held up pretty well. You can see just how swampy the track was in the helmet cam video: 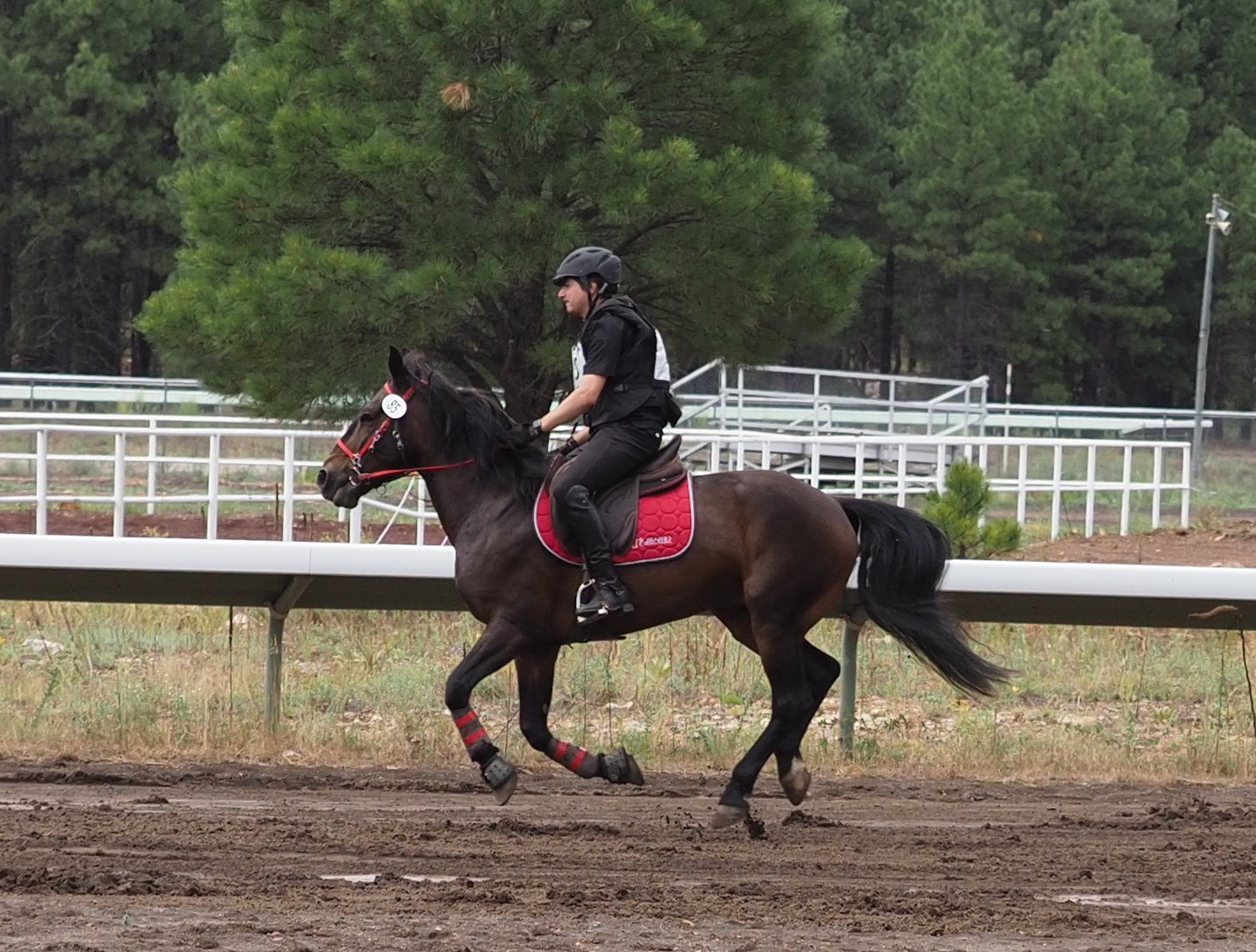 I couldn’t see them around the back half of the track, but as they came back in to view, the woman standing with me (friend/groom of the rider going after my husband) gasped as Eugene decided to spook sideways. Apparently the group of people near the start box were terrifying. She was very concerned and I was like, oh don’t worry, he does that all the time. You can watch it happen at 2:23 in the video. They got past the start box and then he had to eye the jump judge for #1 too. 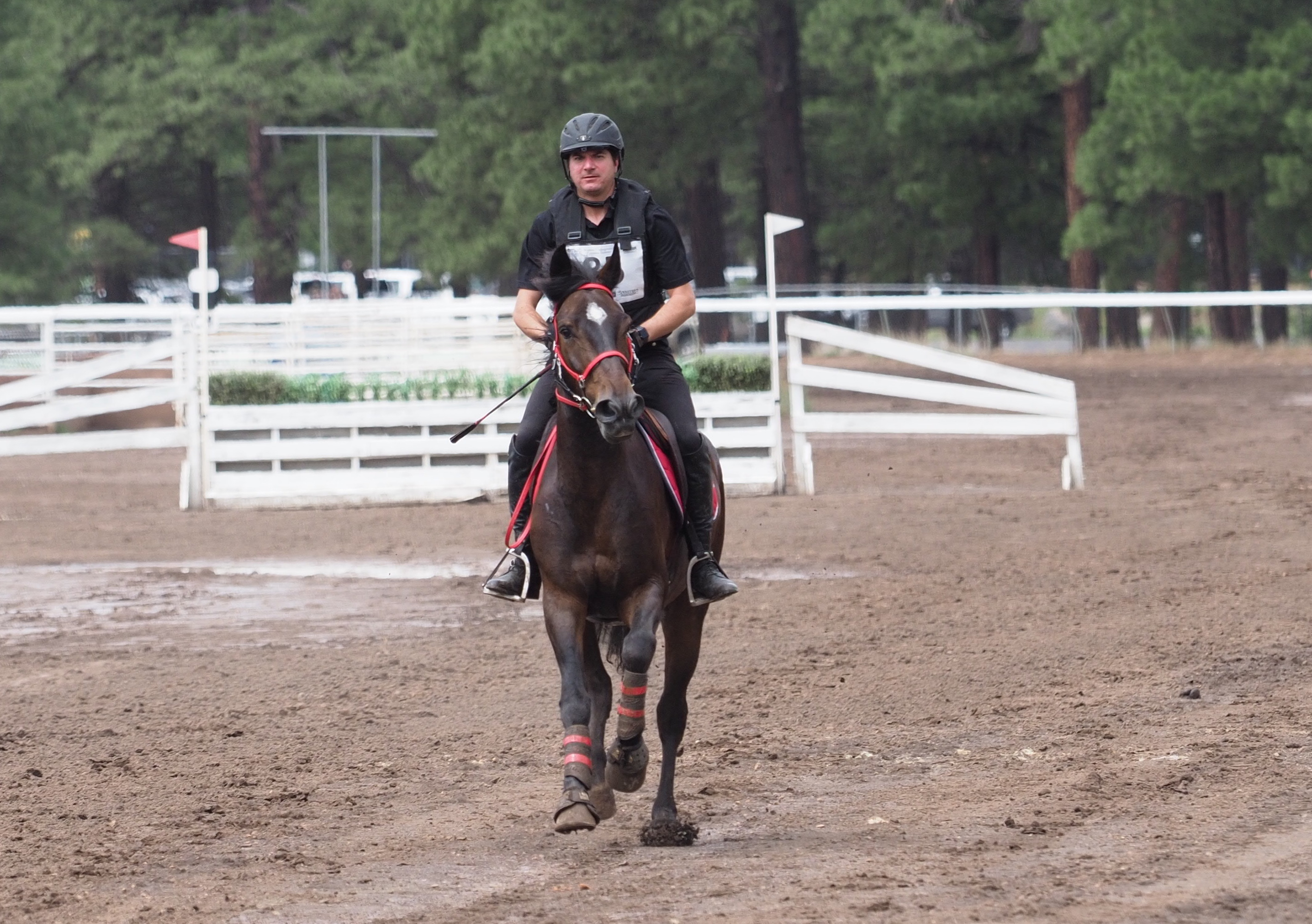 Gotta keep an eye on those jump judges

They pulled in to the assistance area and I gave my husband a gatorade while I did a quick walk around to make sure all of Eugene’s shoes were still attached. I confirmed that they were and they were off again.

The fairgrounds are huge. I tried to convince my husband to rent a golf cart, but he insisted we didn’t need one. That was the wrong answer. If you go to Coconino, get a golf cart. I had just enough time to walk back to stabling and get the bucket and sponge then hustle over to the vet check area. I grabbed some ice water from the tank and got the bag of extra supplies set up. I could see them off in the distance trotting through the trees. Then they came around the turn and across the finish line for C. 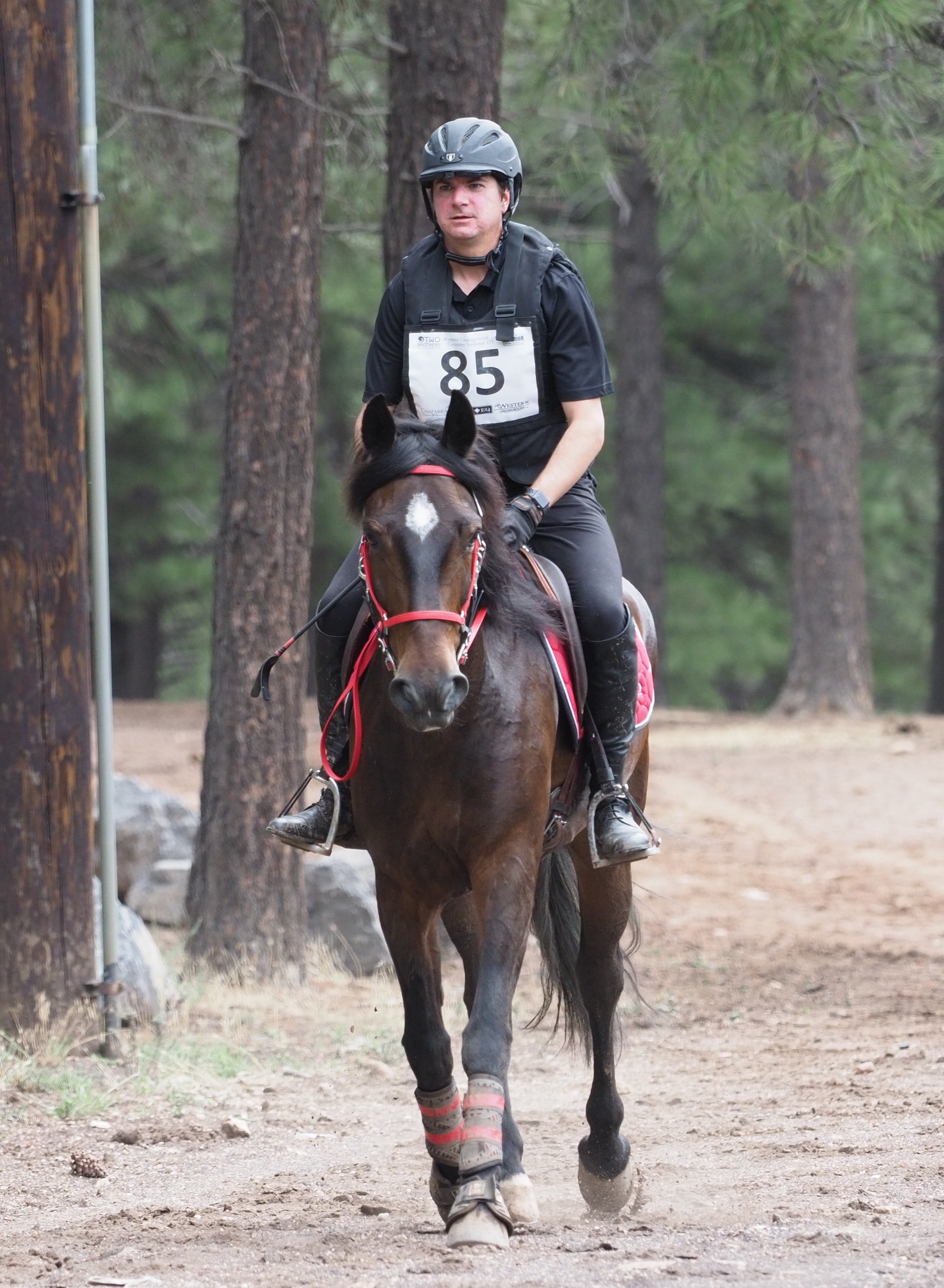 Eugene does not like strange people touching him so the vets had to play a bit of a game of chase to get his vitals. 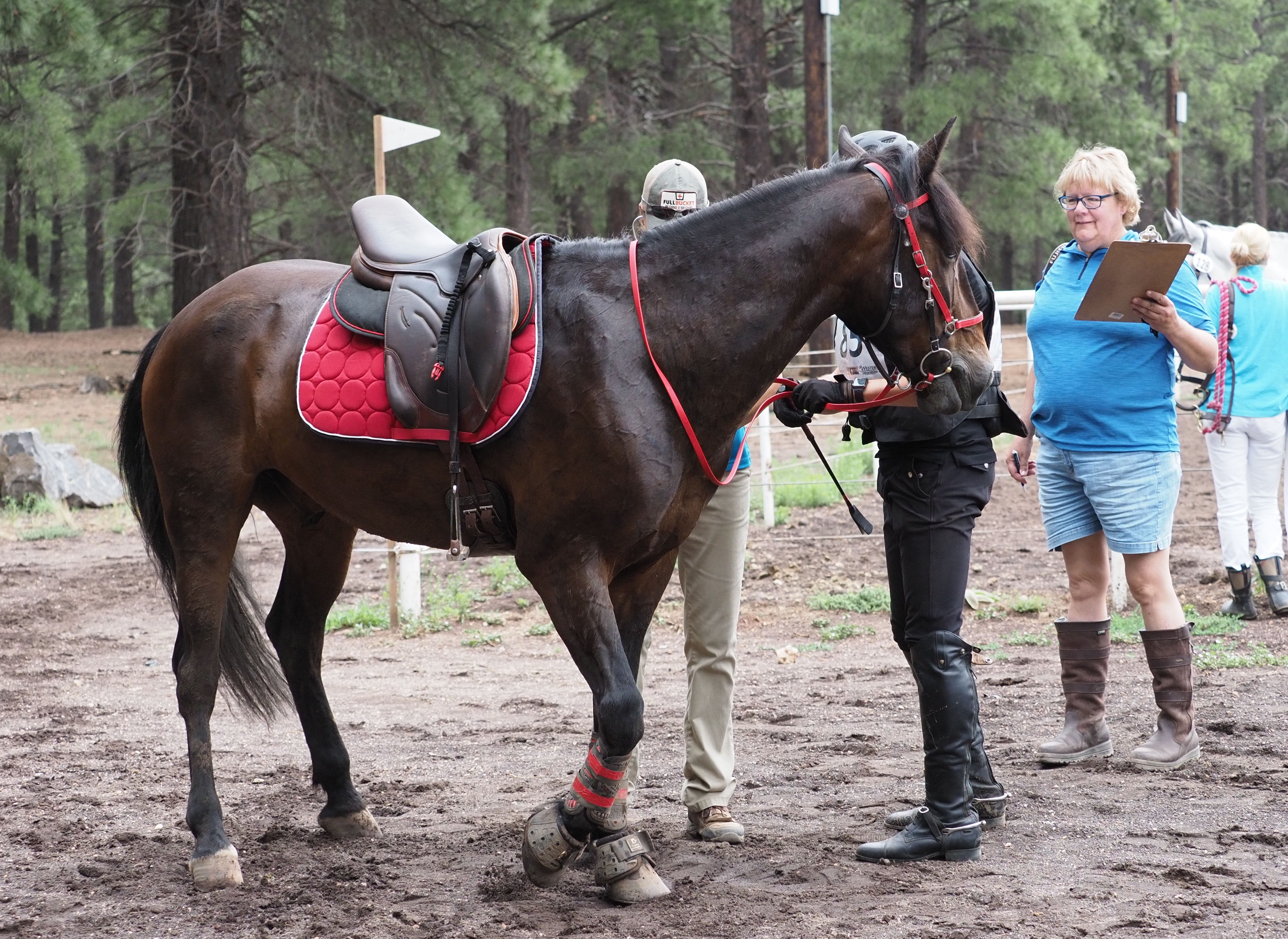 When they tried to take his temperature, he was really not happy. I had to go put the camera down because I thought I’d have to hold him so my husband could take the temperature, but he ended up letting them do it. Begrudgingly. He was at 90 for heart rate and we forget his temperature.

We took full advantage of the endurance bridle to unclip his bit, loosen his girth, and sponge him all over. We had only put his front boots on for the first three phases (didn’t want any extra heat to build up) so we took a moment to put the backs on. Luckily no tack or shoes needed replacing. My husband had a drink and then they were calling him for the vet check. The woman even said “I know it doesn’t feel like it, but it’s been 6 minutes.” Seriously, the time goes so fast. 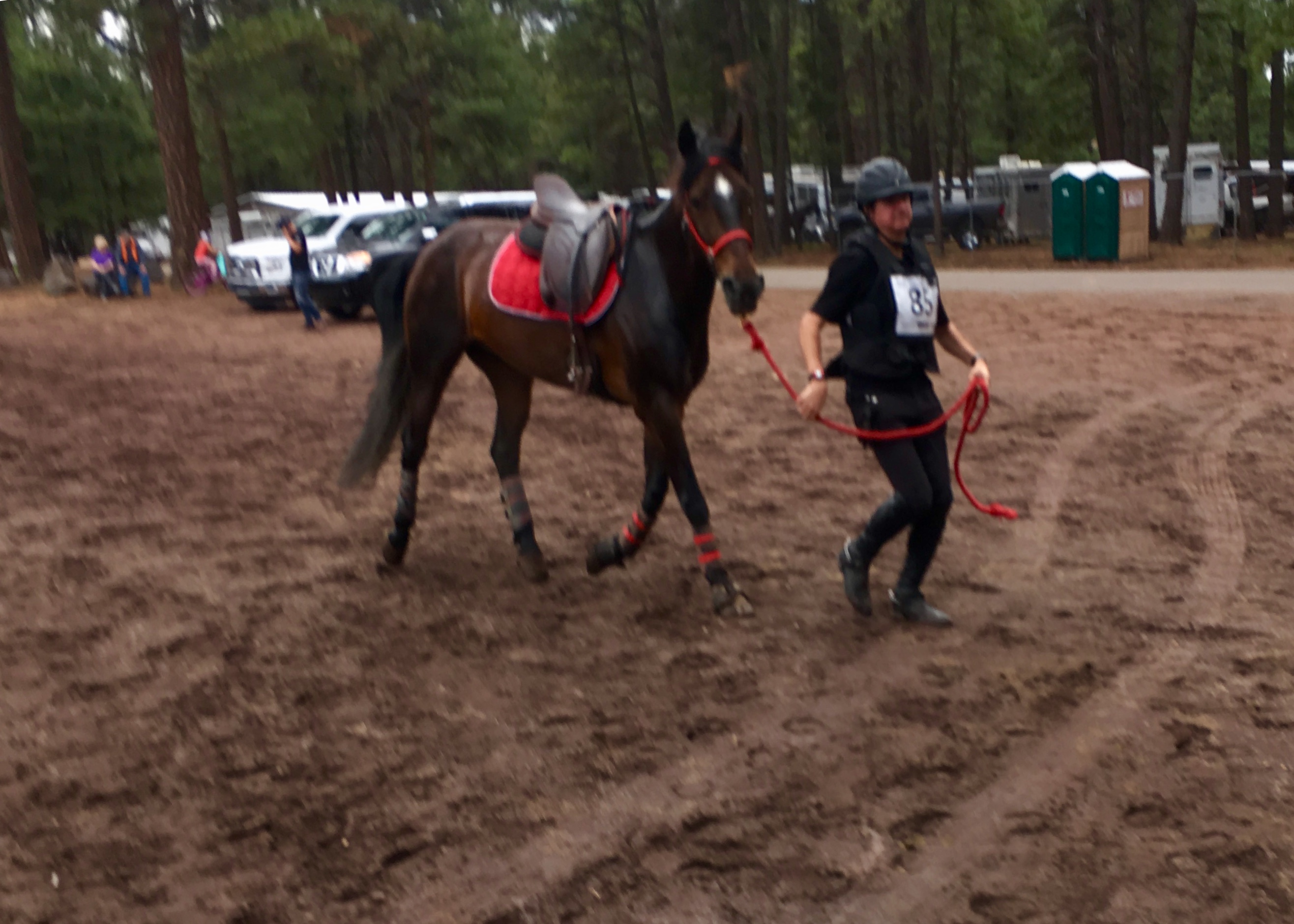 A quick trot out and back and then his vitals were checked again. His heart rate was already down to 56. He had also dropped a whole degree in body temperature though neither of us can remember the exact temperatures. He really did not want his temperature taken again, but we got through it. The vet joked that this was part of the job and he’d have to get used to it.Yeah, good luck with that. We’ve had him for 2 years now and he still sometimes decides I’m terrifying when I try to brush him. I don’t think he’s going to decide having a thermometer shoved up his butt is okay anytime soon. With all the extra dancing around, we had to rush to get his bit back on and get my husband mounted. I left all the extra equipment at the vet box and went down to take pictures.

I left them in the start box area and hustled out to find a good spot for pictures. Then they were off. 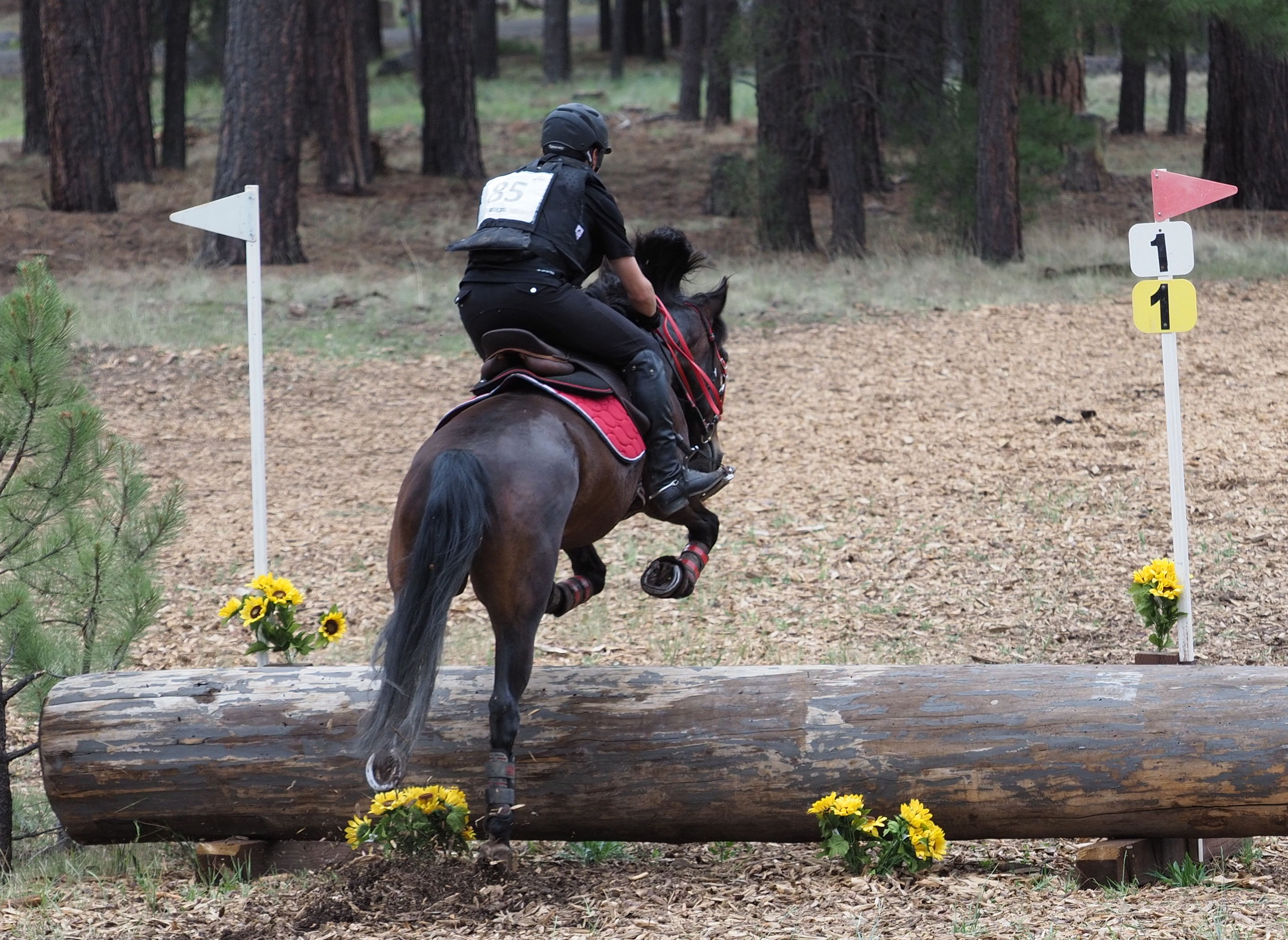 This time they were not on a casual stroll through the countryside. Eugene wasn’t at all tired from the roads and tracks or steeplechase. Instead, he was fresh and ready to rock XC. 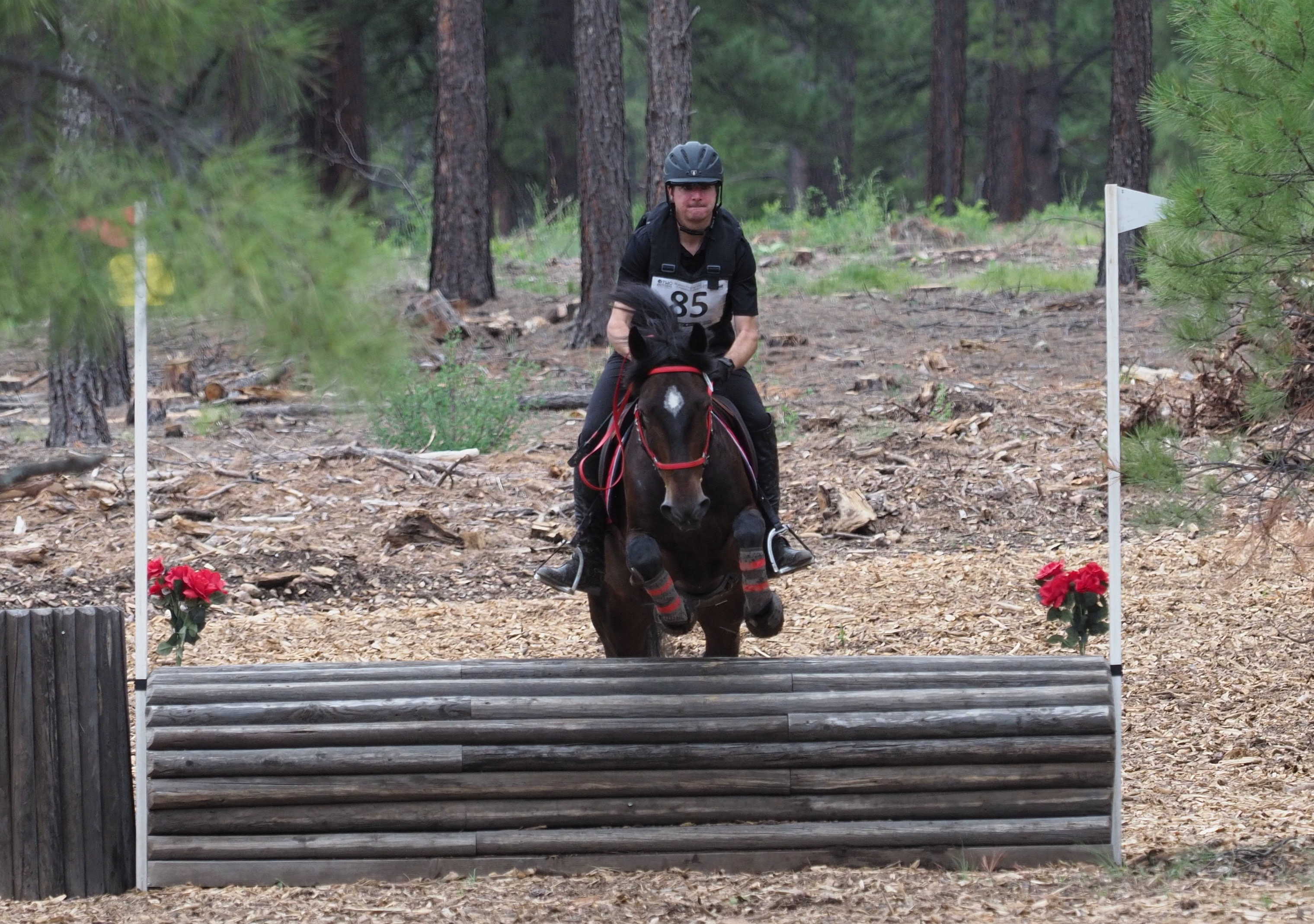 It was so good to see the normal Eugene back out of cross country: flying over jumps, resisting my husband when he tried to get him to slow down for a little bit, locked on and rarin’ to go. 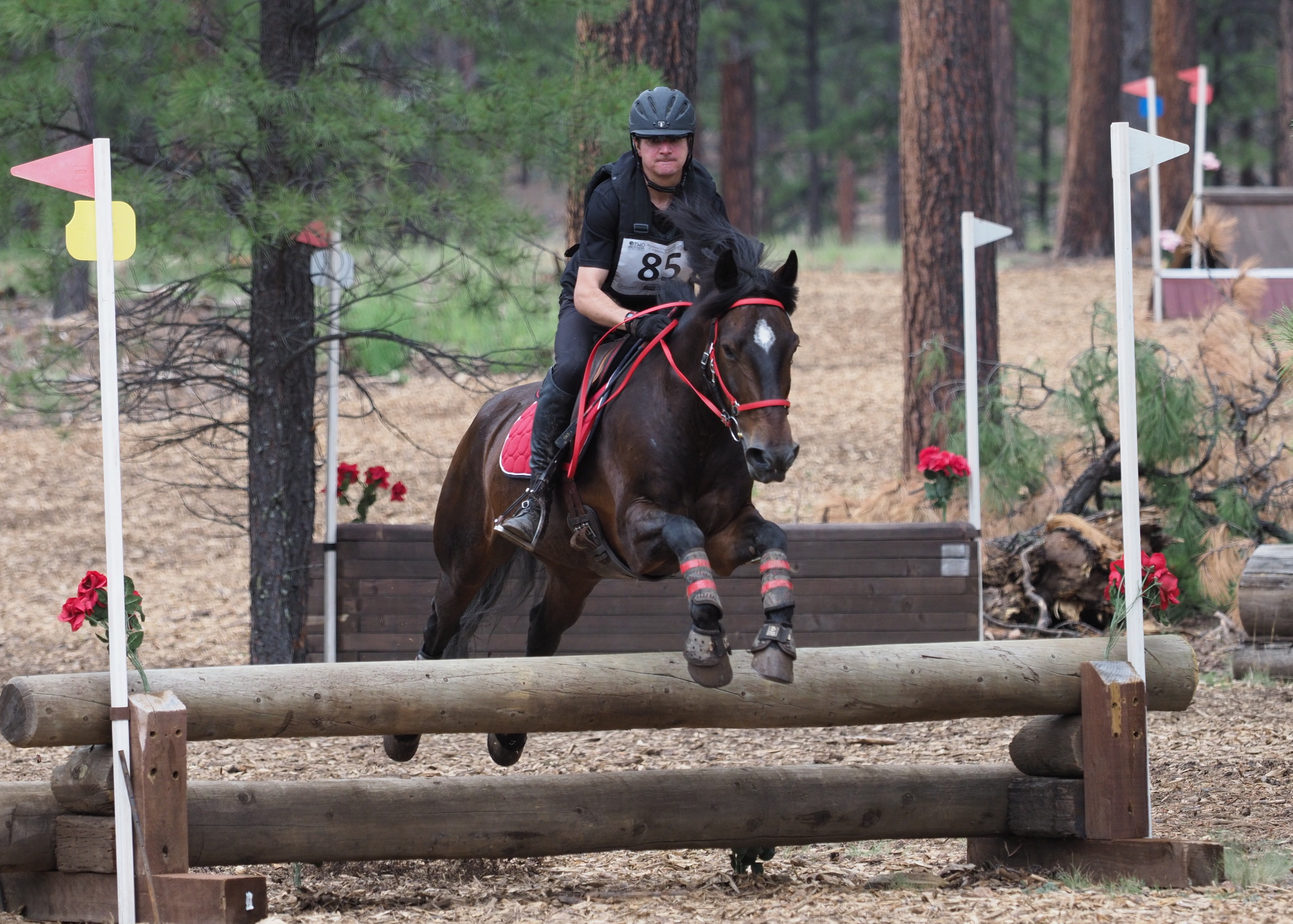 Although it certainly helped that the jumps were smaller, I think this combination of rider and horse could have done Novice just fine. They were really going so much better. Coconino moved a few jumps between the two weekends. The boat for BN was now in front of the water. and they had placed it a bit awkwardly in that you either had to slice it or make a turn off the track through the trees to get onto a new track and lined up for #6. Eugene thought slowing down to make the turn through the trees was stupid. He was on a roll. 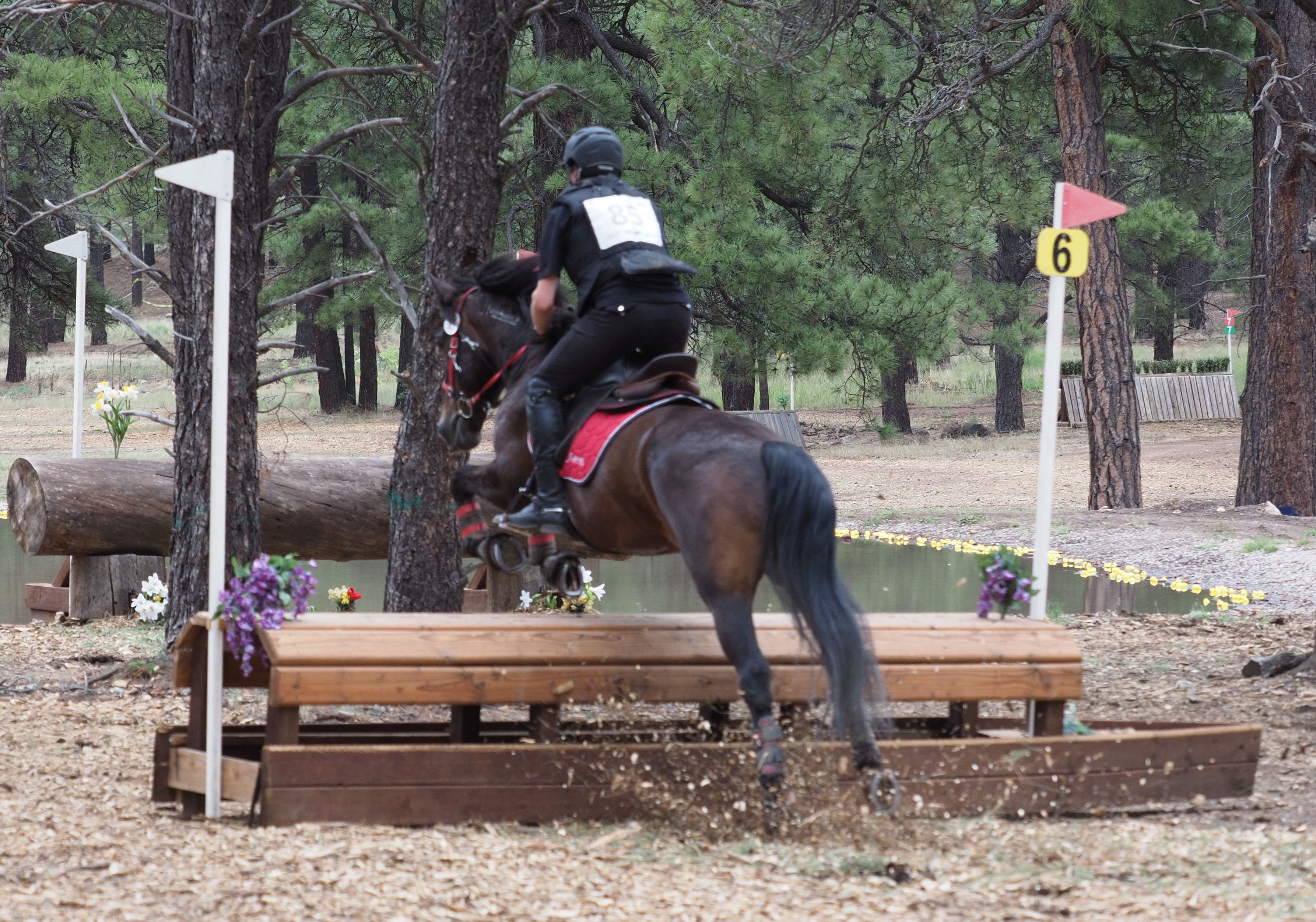 There was no backing off of jumps or any hesitation. He even jumped the big table at nine beautifully. He just locked on, lengthened his stride to it, and soared. 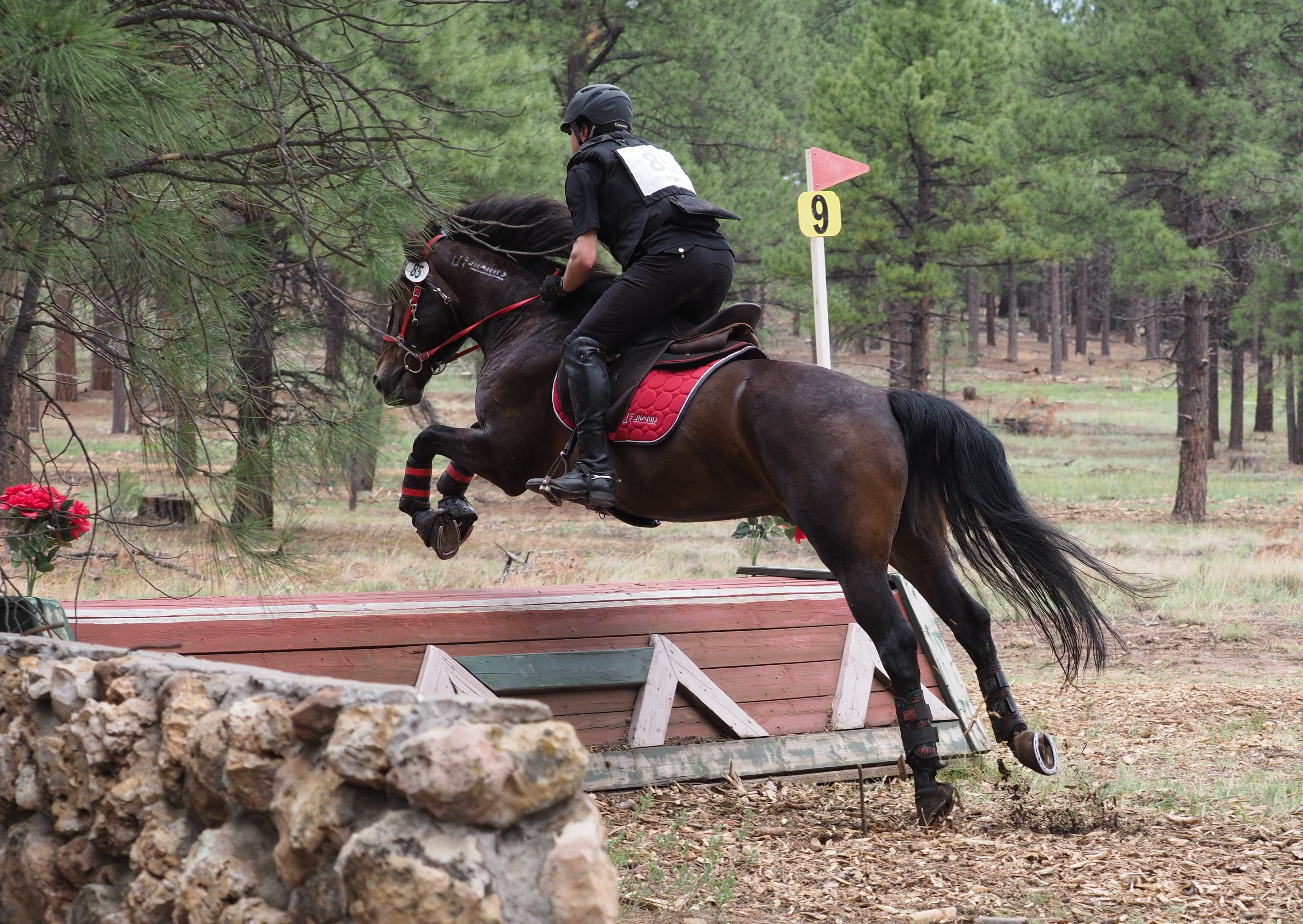 There was a long, flat stretch after #9 to #10. We had discussed giving Eugene a trot break there to rest his jumping muscles and also to keep from going under time. Eugene thought that was stupid, but he’s a good boy so he did it anyway. 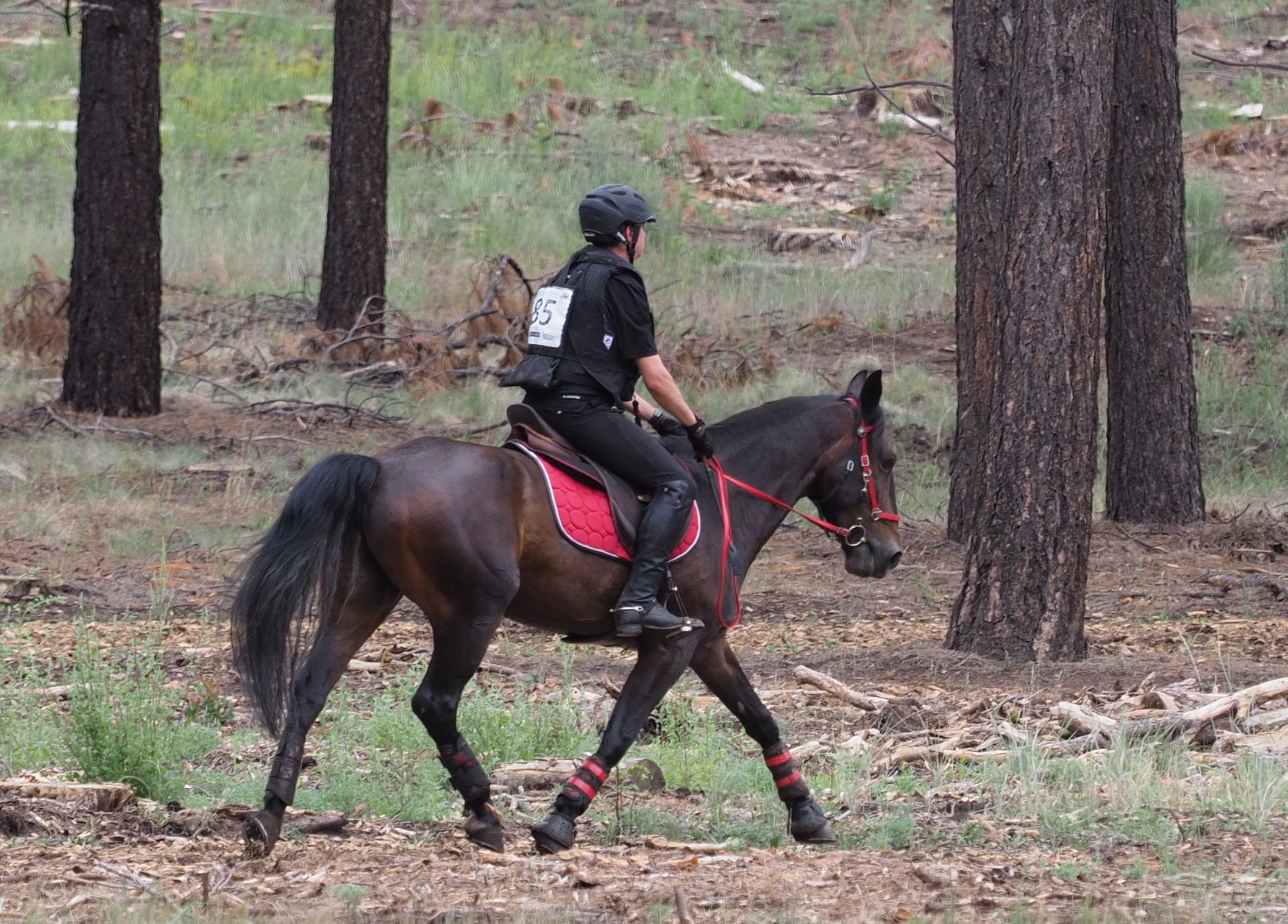 I lost sight of them in the back half, but my husband said he was perfect. He didn’t even spook at the ditch. I ran over to try to get closer shots of them at the end, but I was still far away and they came out a bit blurry. 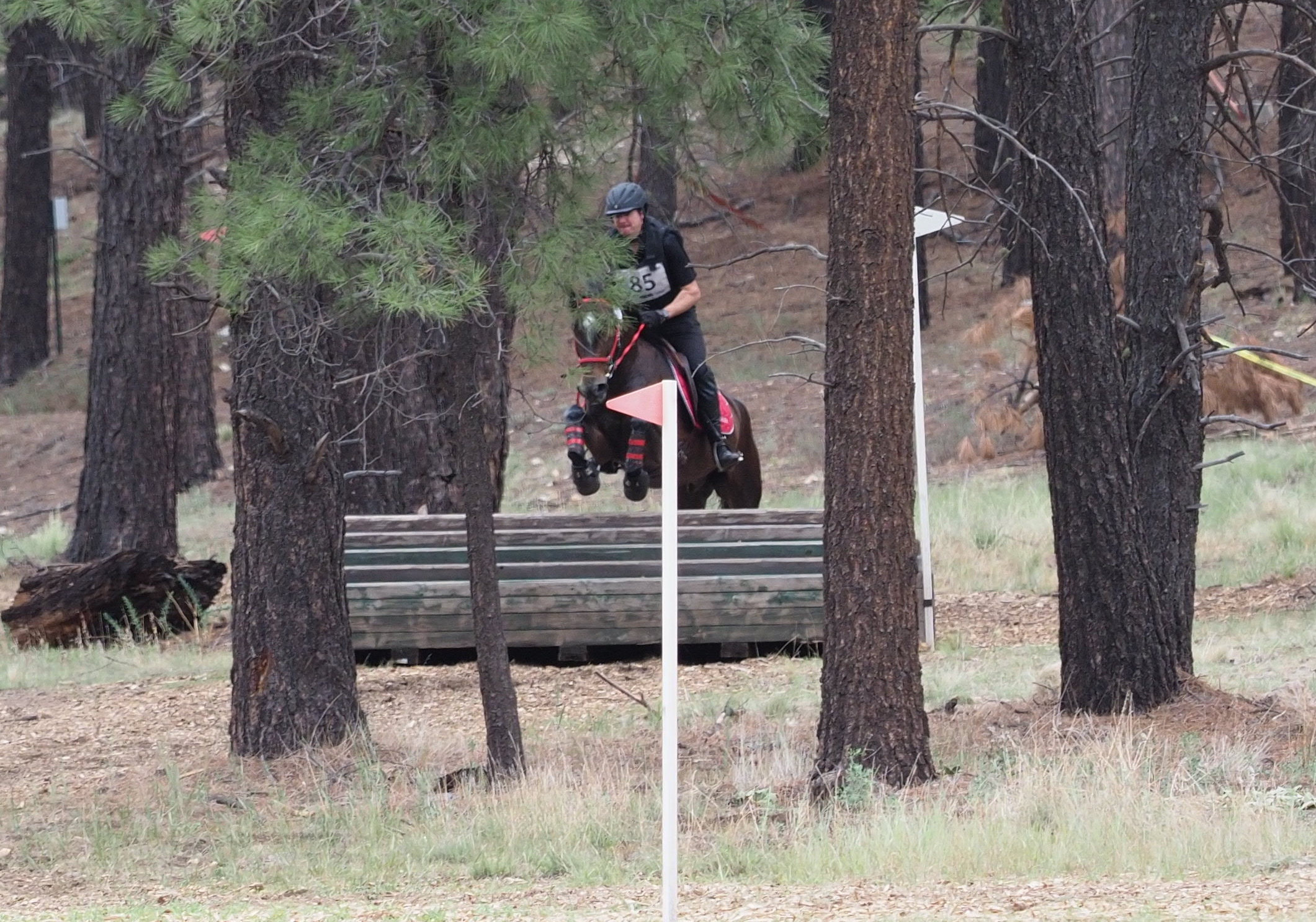 look at those knees though

And then they were through the finish flags and double clear for cross country. 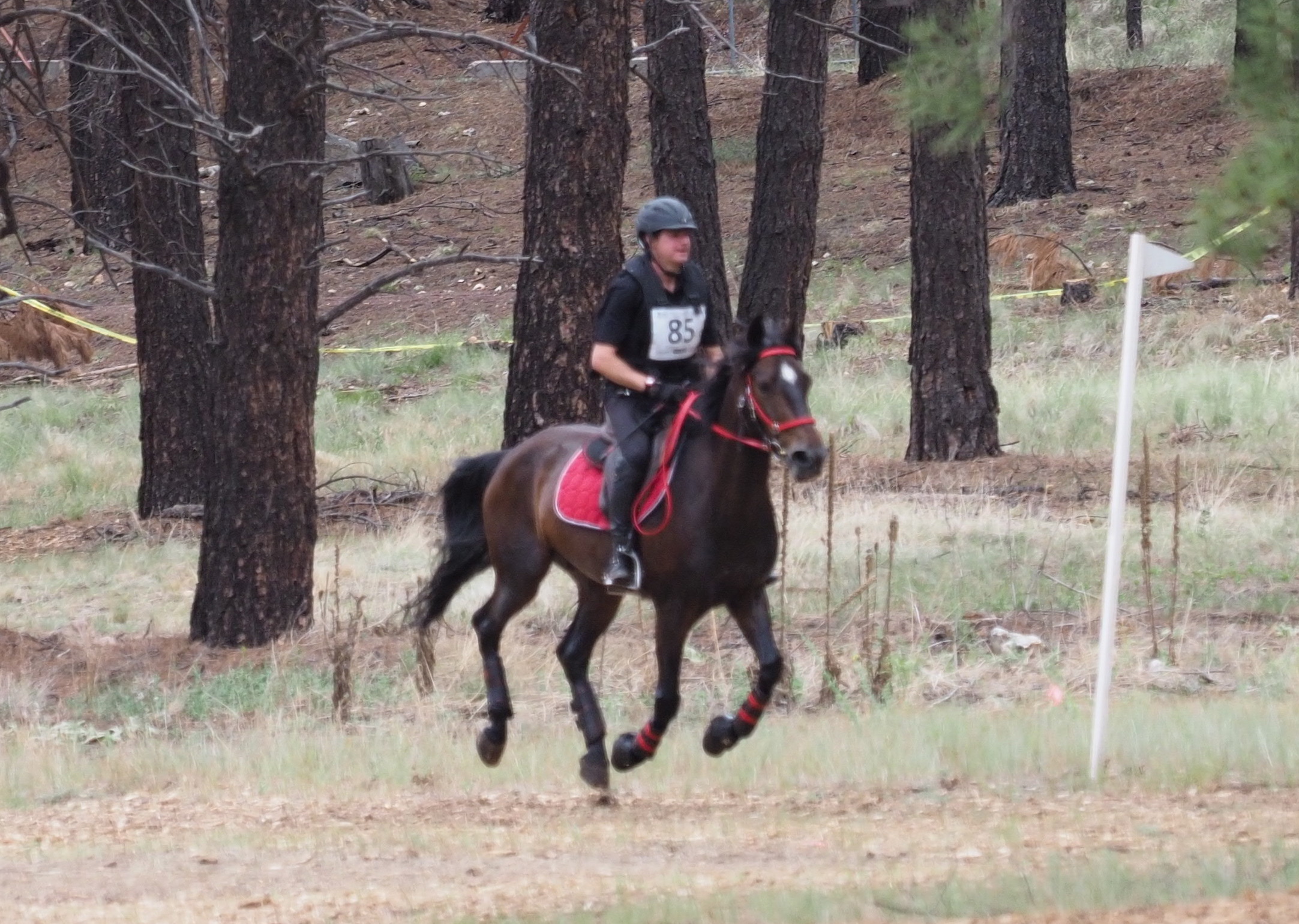 He doesn’t even look tired!

They left cross country and went back up to the vet check. He got untacked and walked around for a bit before the vets would see him, but he was fine. The vet said he had the best heart rate they’d seen all day. We took him back and I gave him a bath while my husband went to get his tack and then put his ice boots on. I swear this horse loves his ice boots. 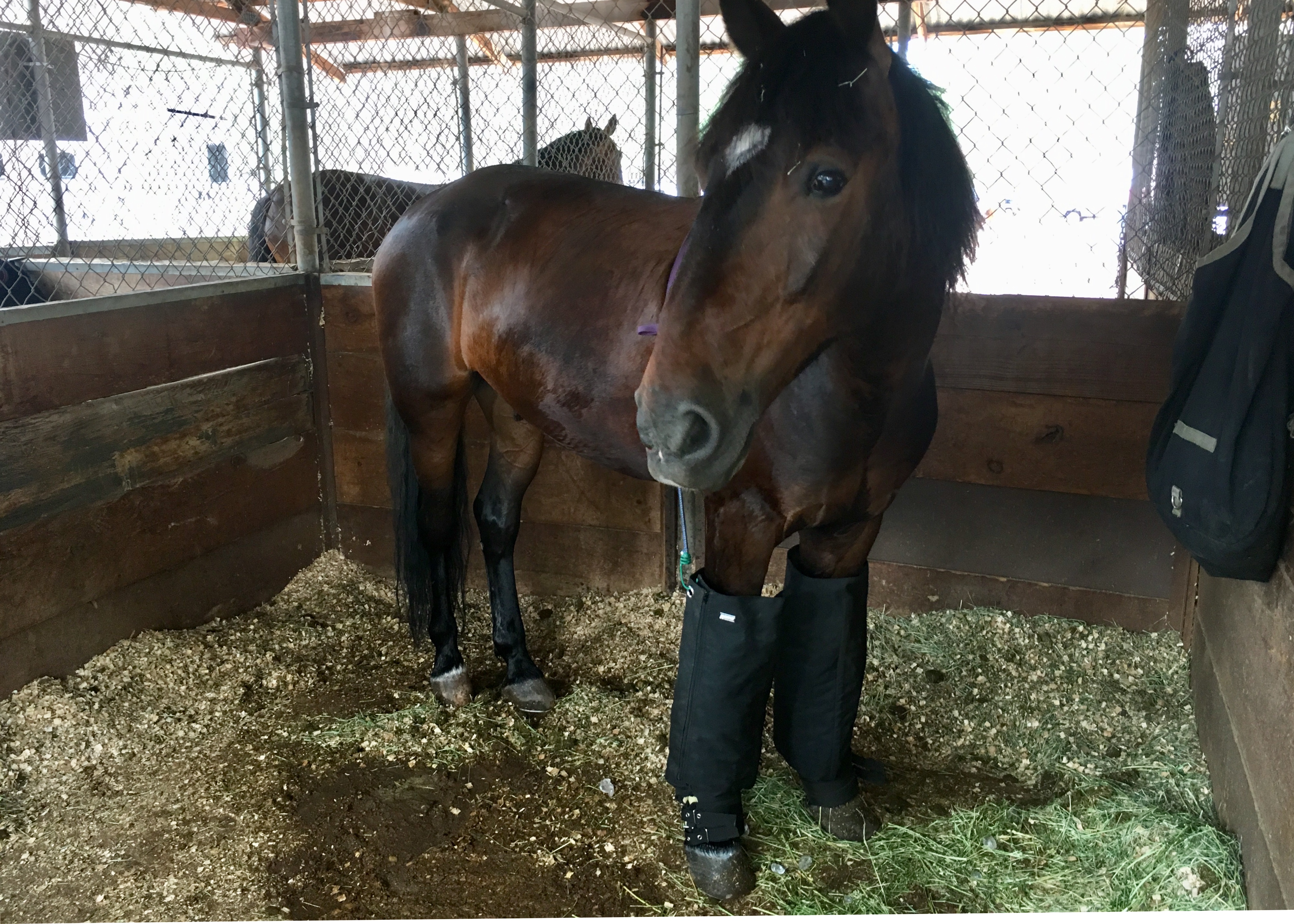 After icing, we gave him some ice to eat/play with, filled his hay net, fluffed his stall up with fresh shavings and put his Back on Track sheet for the night. Good ponies get all the rewards.