One of the (many) great things about showing at Camelot is the free cross country schooling. On Friday before the show you’re allowed to school any of the jumps including the whole course and again on Sunday after. On Friday I made plans to school XC with Kate. She had a bunch of horses to ride and offered to let my husband ride one of hers as well. Nicole joined us on the adorable ginger pony for a sort of XC schooling blogger meet up. 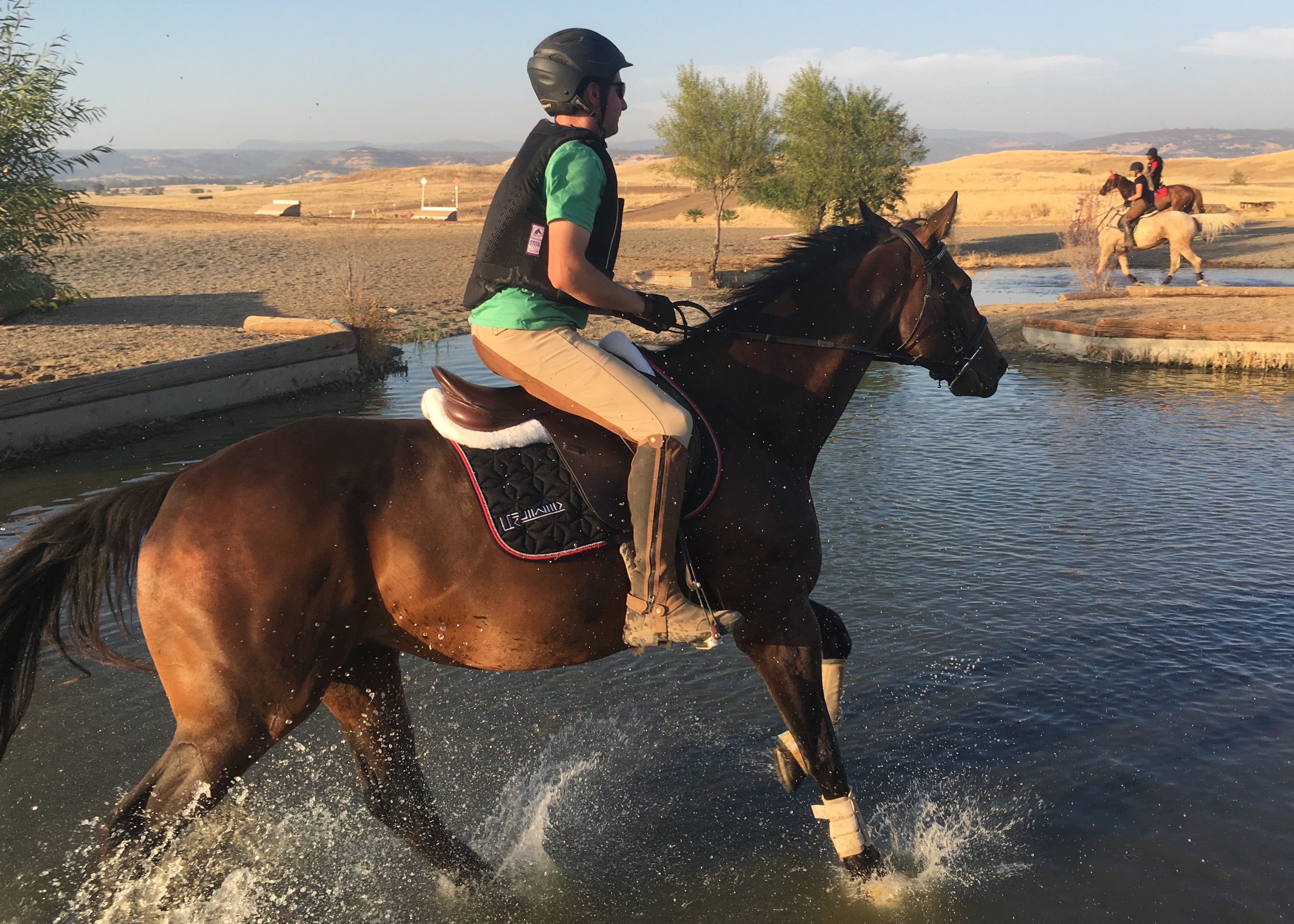 I offered to take this lovely mare, but oddly, Kate wasn’t up for that

We started by trotting around a bit to get warmed up and then went over to do the 3rd jump. Levi watched the other horses go first with increasing amounts of prancing and head tossing. Then when it was his turn, he took off squealing and bucking. I got him back under control and made him walk the damned jump because that sort of behavior will not be rewarded, but he was way too full of himself. 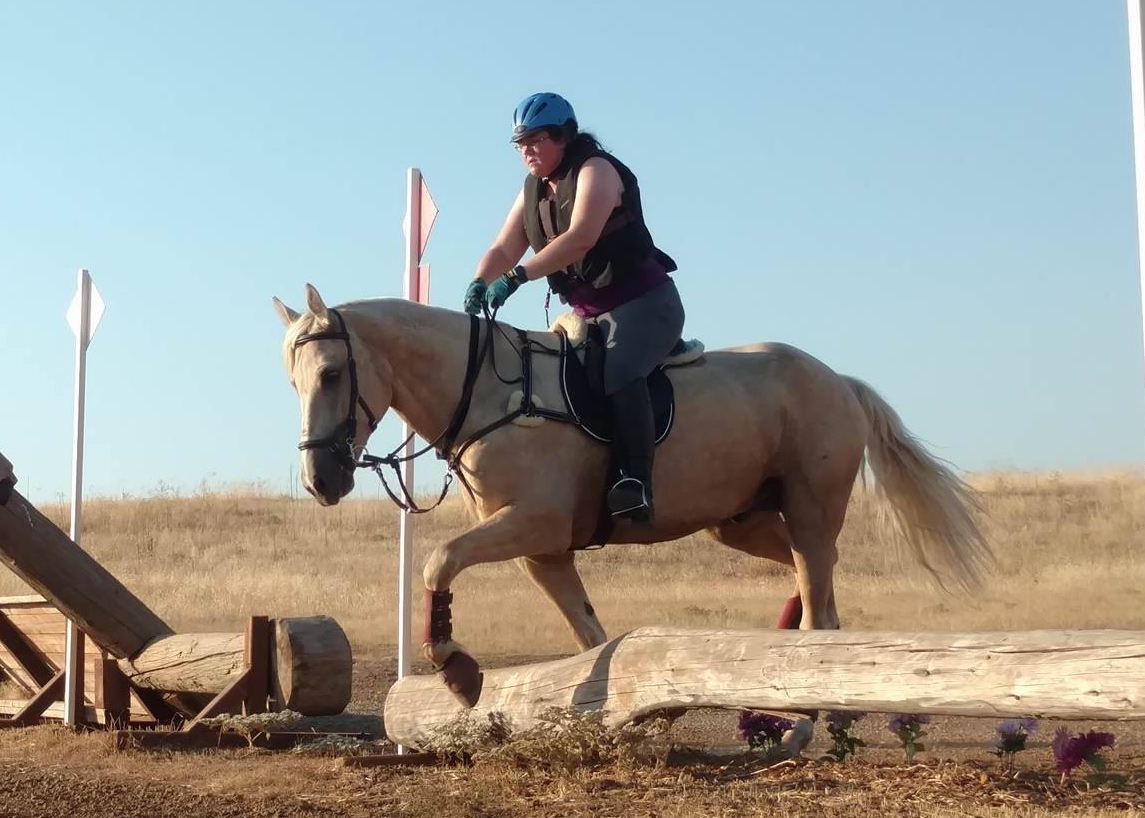 I did eventually do the jump at a trot and canter, but he was getting more and more worked up and I was getting more and more unnerved. Because of my back injuries, any bucking basically results in searing/stabbing pain radiating through my body and then I go into an unconscious defensive position. This is not helpful for me or for green horses. So I asked Kate to ride him for me.

He was being a bit of a pill for her too, but she’s better equipped to handle it. I eventually got back on and did some of the jumps up by the water. While Levi was excited about the jumping, his real temper tantrums were about the other horses. If they were moving and he wasn’t, he would freak out. If they were standing and he had to keep going: tantrum.

We did eventually get over a few jumps and really the jumping part was good. I figured we wouldn’t be near any other horses when we were actually doing cross country (although that turned out to not be true since we almost passed the person in front of us) and we’d be fine.

During the actual show, he was great. No bucking, squealing, or bolting. We did have some lack of brakes issues, but he otherwise was really good. On Sunday, my husband and I schooled cross country again after stadium. Since Levi had already done a lot, I took it pretty easy, but I did want to school a few BN fences and my husband wanted to do some with Eugene as well. 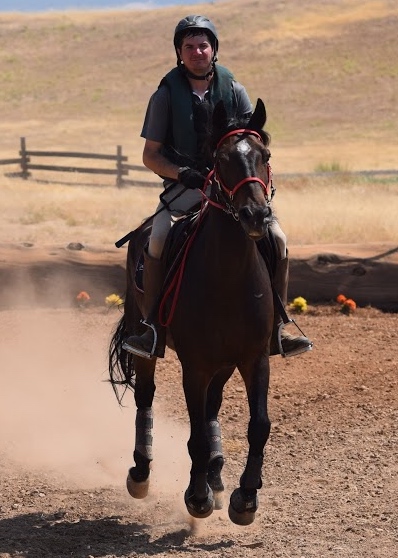 They were both really happy to be back at it. We started with the BN version of the post and rails jump. It was crazy to me just how different jumping Levi and Nilla is. Levi just pops over BN jumps like they’re nothing and because he’s so much taller than Nilla, they look tiny from up on his back. 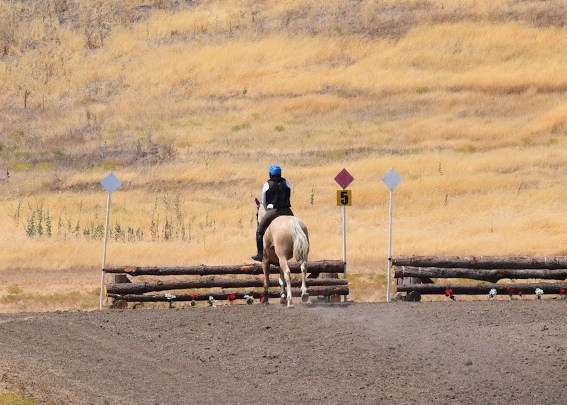 My husband also took Eugene over that jump. That little Mustang is such a good boy. 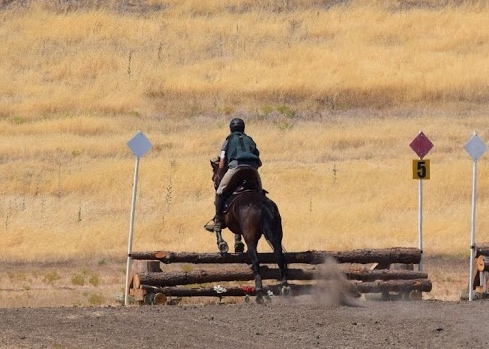 After that jump, we schooled the ditch complex a bit. 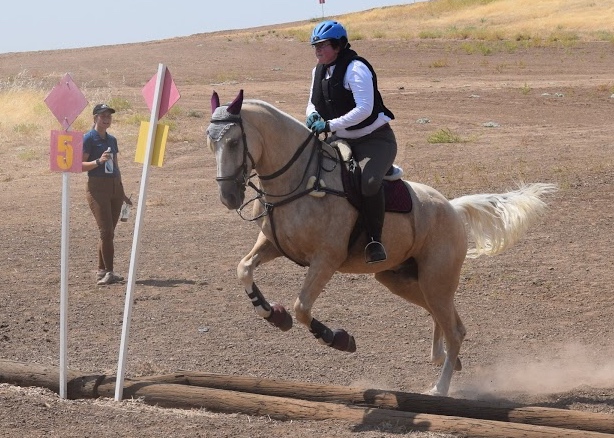 Levi was great about the ditch so we did the ditch to the BN chevron cut out. We got a super awkward stride to that, but he still carted my ass over it like the good boy he is. 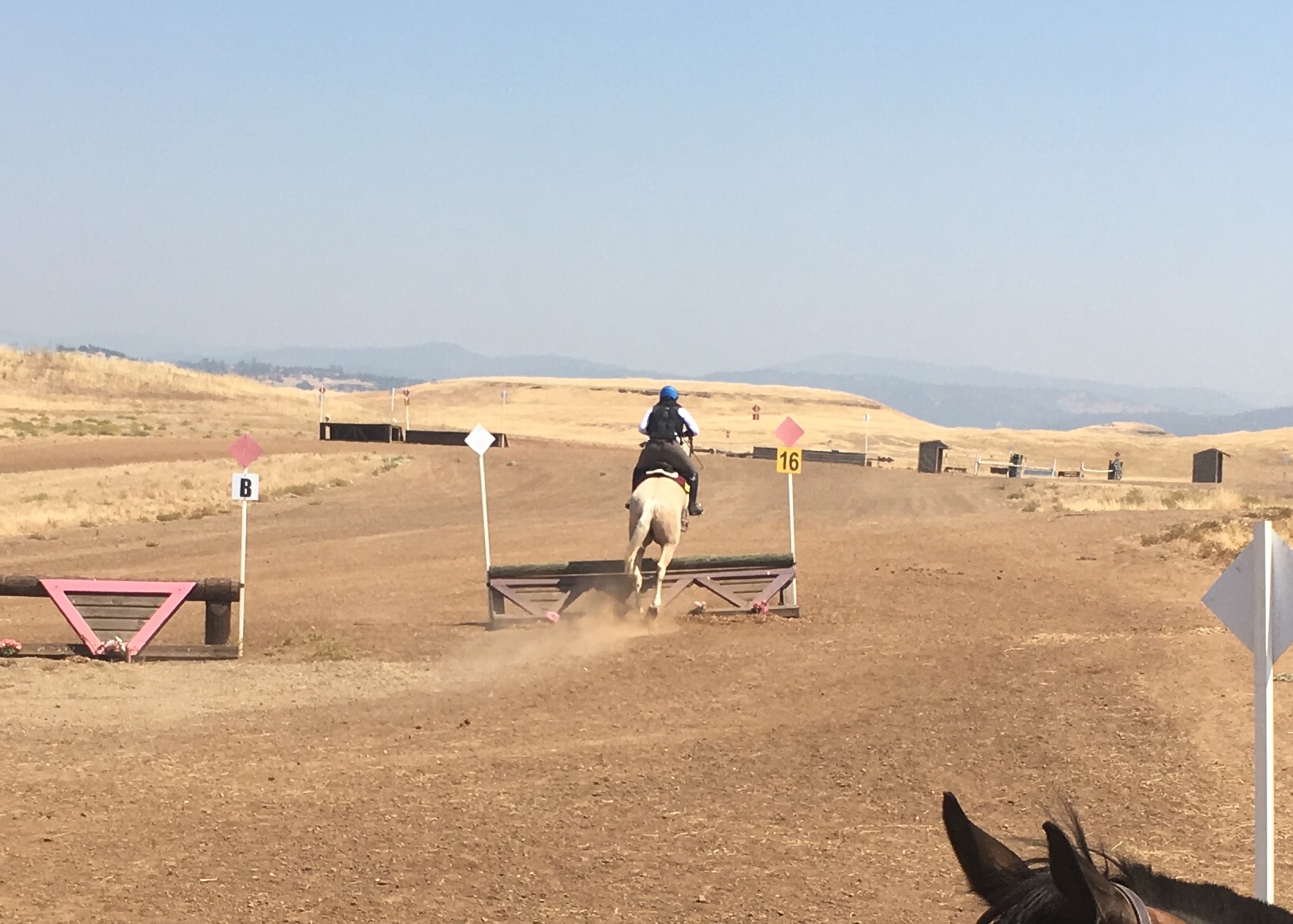 We wandered over to the water and Kate’s kids schooled some stuff there while I wandered through the water, but didn’t do any jumps. We went over to the bank complex next. Levi hopped up and dropped down the baby bank just fine then dropped down the larger bank fine the first time. The second time we walked up to it, he refused. I was like, but we already did this. We tried for a while to get him down it with Kate getting after me for not actually keeping my leg on (I would release when he made as if to go down and thus taught him he could get out of it by pretending and not actually doing). I eventually just hopped off and walked him down it a few times. He happily plopped down following me and then did it again when I got back on. Sadly, no pictures of the bank.

From there we went to school the BN Trakhener. I don’t think I’ve ever seen a BN height trakehner, and I thought it was kinda big, but Levi didn’t care even when we got a horrible take off spot for it. 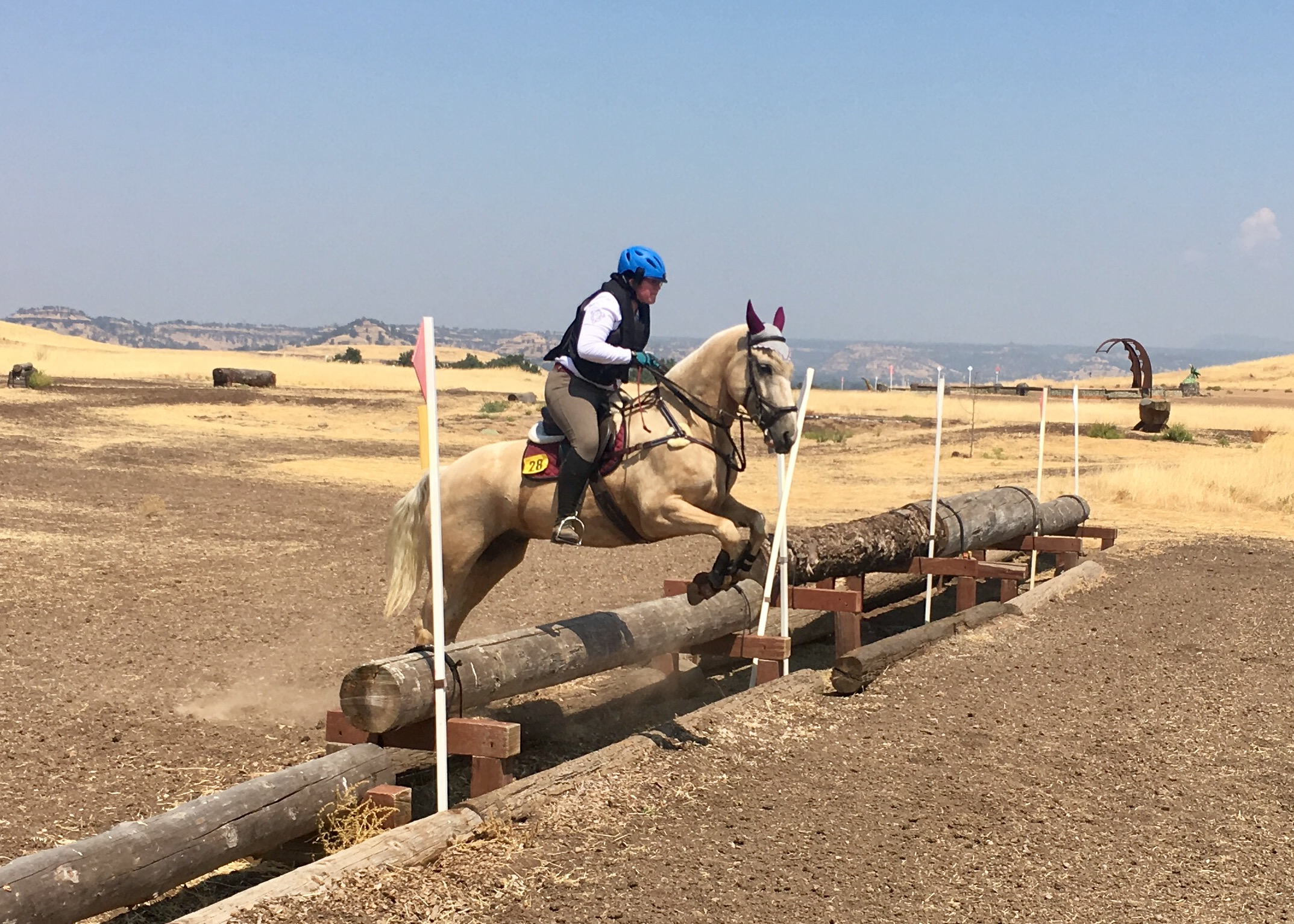 Eugene looked much better going over the trakehner. He was definitely a happy little horse to be back to cross country. 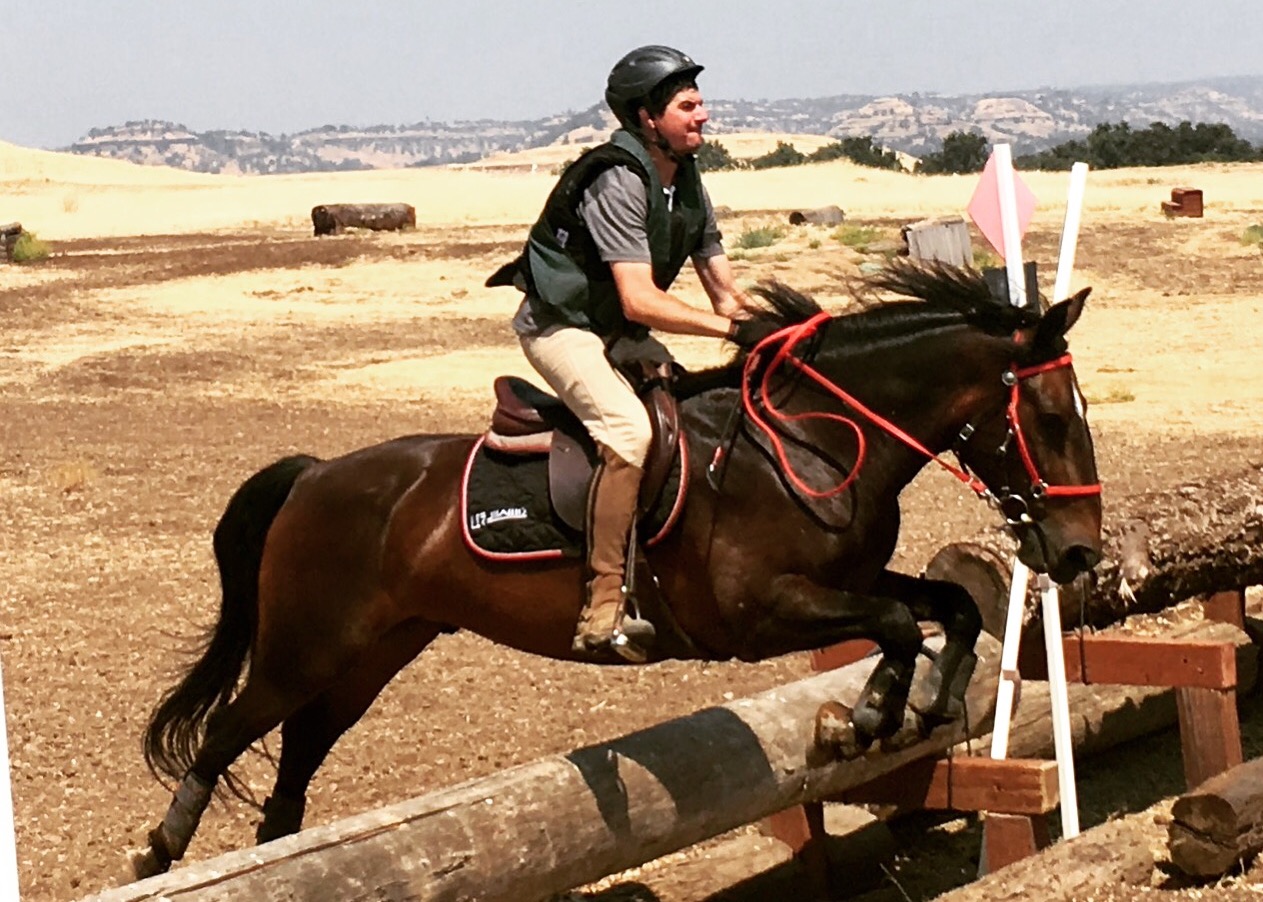 Next we tried a latticed coop and both of our horses thought it was terrifying and needed stopping and staring at. I had to circle Levi and represent and he was definitely not gonna let it touch him. 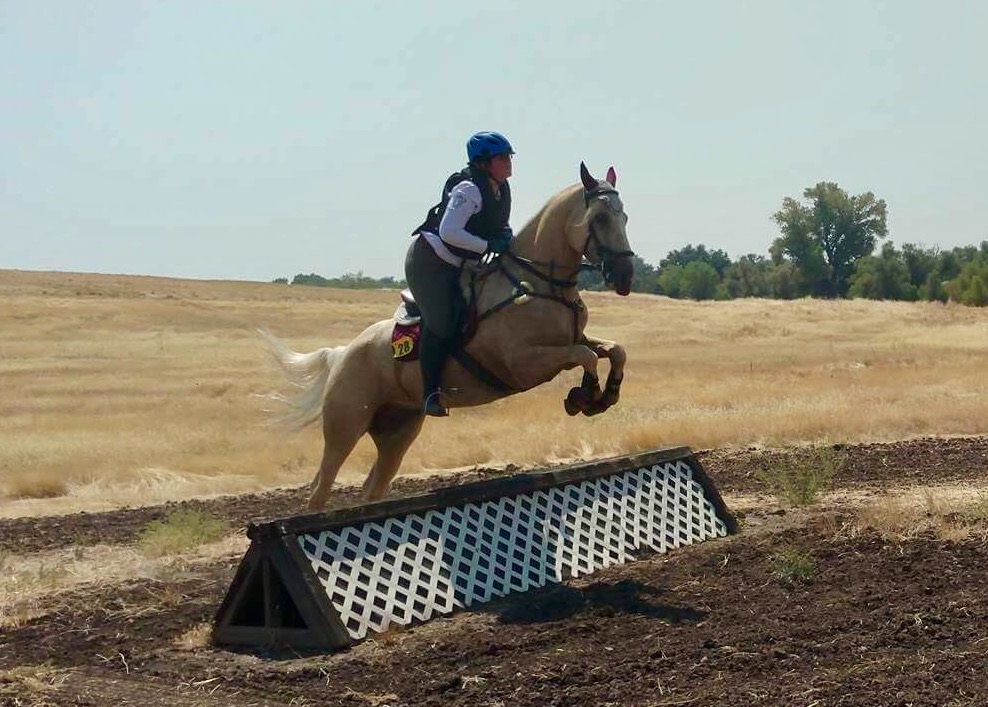 Poor Eugene tried to both refuse and over jump the coop on the same try with not so pretty results.

This horse is way more forgiving than we have any right to expect. He came right back around and hopped it like nothing bad had ever happened.

My husband wanted to school the bigger ditches and as we were on our way over to the complex I wanted to run Levi through the new water. I didn’t have any pictures of us cantering through water so I had Kat take some including this cool collage.

The ditches over at the other complex were part of the training and prelim coffin complex and they were huge. None of our horses have ever cared about ditches, but this one actually concerned Eugene. He first tried to stop and then just decided to leap the hell out of it. 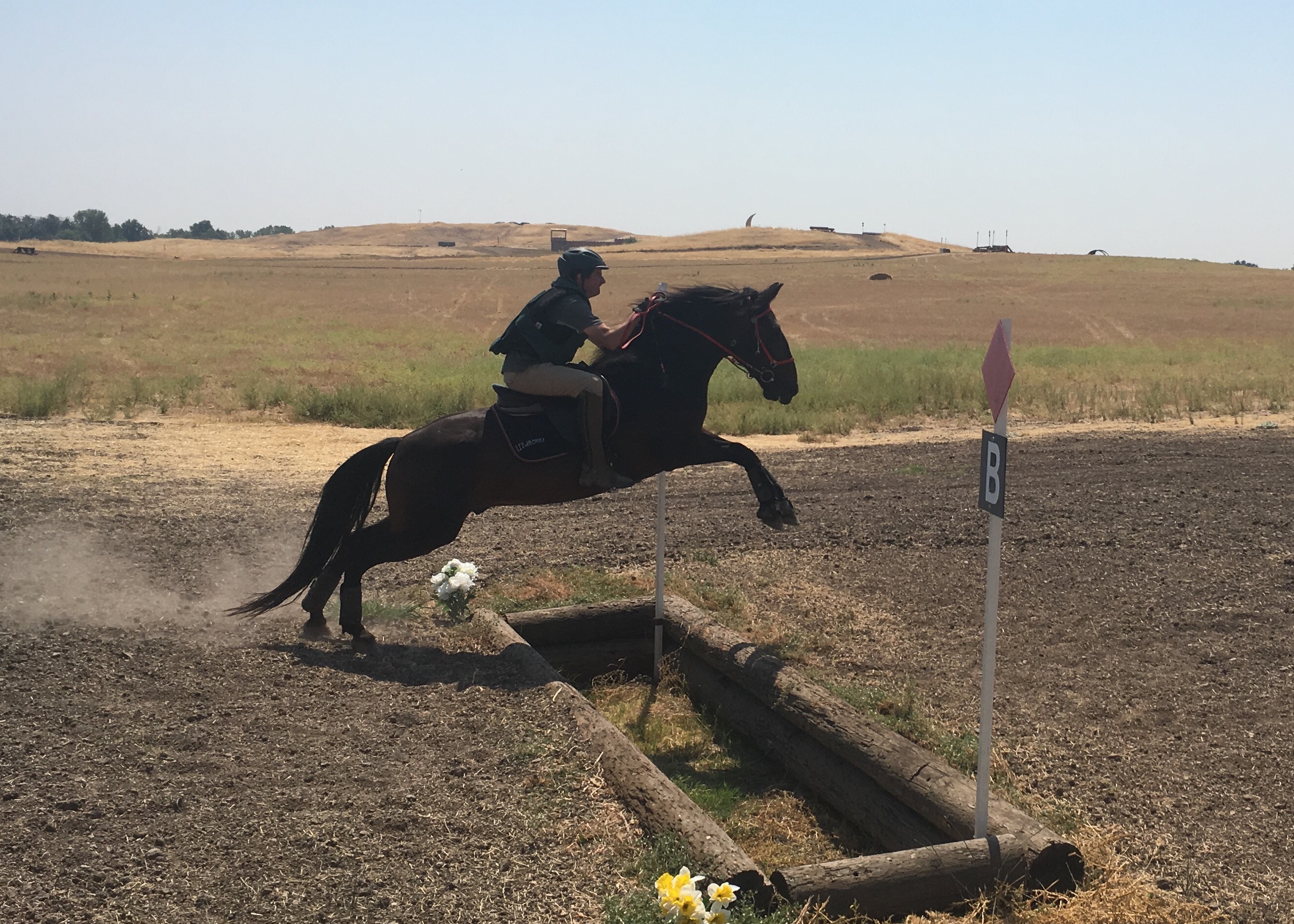 He’s such a good boy. They schooled it a few times until Eugene was more confident. I hopped off and let Levi follow me over a few times and he was pretty chill about it. We stopped at that though since he’d already done a lot of work for the day and I had plans to school him again next week. All in all though it was a very fun day of cross country schooling. 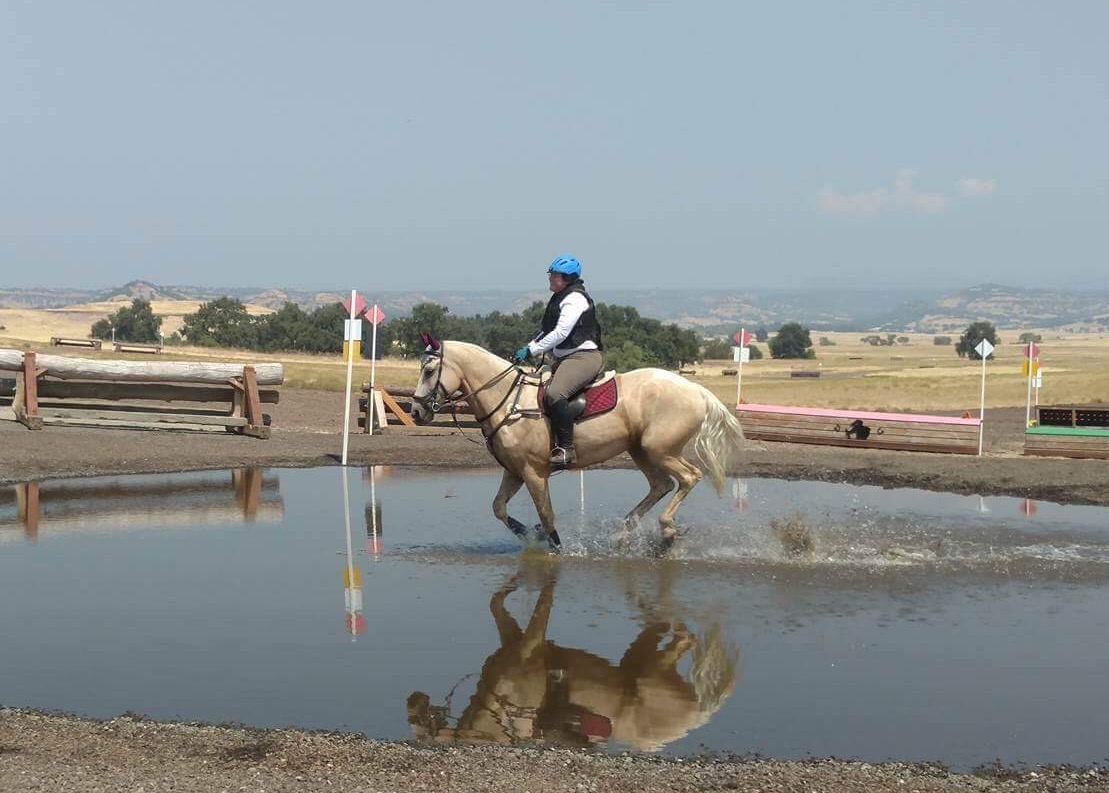 Most pictures in this post are PC Robin or PC Kate.