My husband and I had different goals at the show. I wanted to focus on dressage and I also wanted to do a few low jumping rounds just to get around an entire course without having any refusals or runouts. My husband wanted to concentrate on jumping. He did do Training 1 just to get Eugene a little practice in the dressage ring, but the goal was to spend as much time in the jumper arena as they could.

Eugene has a great heart and work ethic. He will try himself to death for my husband, but he lack natural jumping ability. The biggest problem is that he doesn’t seem to care if he hits a jump. It’s nice that my husband, as an amateur just starting out in eventing, can mess something up and Eugene won’t hold a grudge. However, Eugene just doesn’t seem to care about anything. If Nilla accidentally touched a jump, she’d come back around and launch herself over it. If Eugene crashes into a jump and knocks the whole thing down? He just carries on and sees no reason to pick his feet up next time. He does it wether the jumps are 18″ or 2’6″. Luckily he’s decided cross country jumps need to actually be cleared, but stadium has been tricky. While dressage certainly isn’t perfect, stadium is what’s really keeping them out of the ribbons. At Eventful Acres, they would have been 2nd place instead of 8th if they hadn’t dropped 2 rails in stadium. At Woodside, they dropped 4.

Kate suggested just doing more stadium practice at actual BN height to let him figure it out. JK does ticketed rounds on Saturdays, which I really like. You buy tickets and then you just show up at the ring you want to ride in at the time of the height you want to do and hand in your ticket. If you go clear you get a blue ribbon that says clear round. If not, you get nothing but the experience. It’s cheaper than the judged rounds on Sunday, but you still get the atmosphere and setup of a show to school. And since we don’t really care about winning at H/J schooling shows, it’s perfect for us. My husband did a warm up round at .70-.75m before his dressage test and Eugene happily ran around knocking poles down. 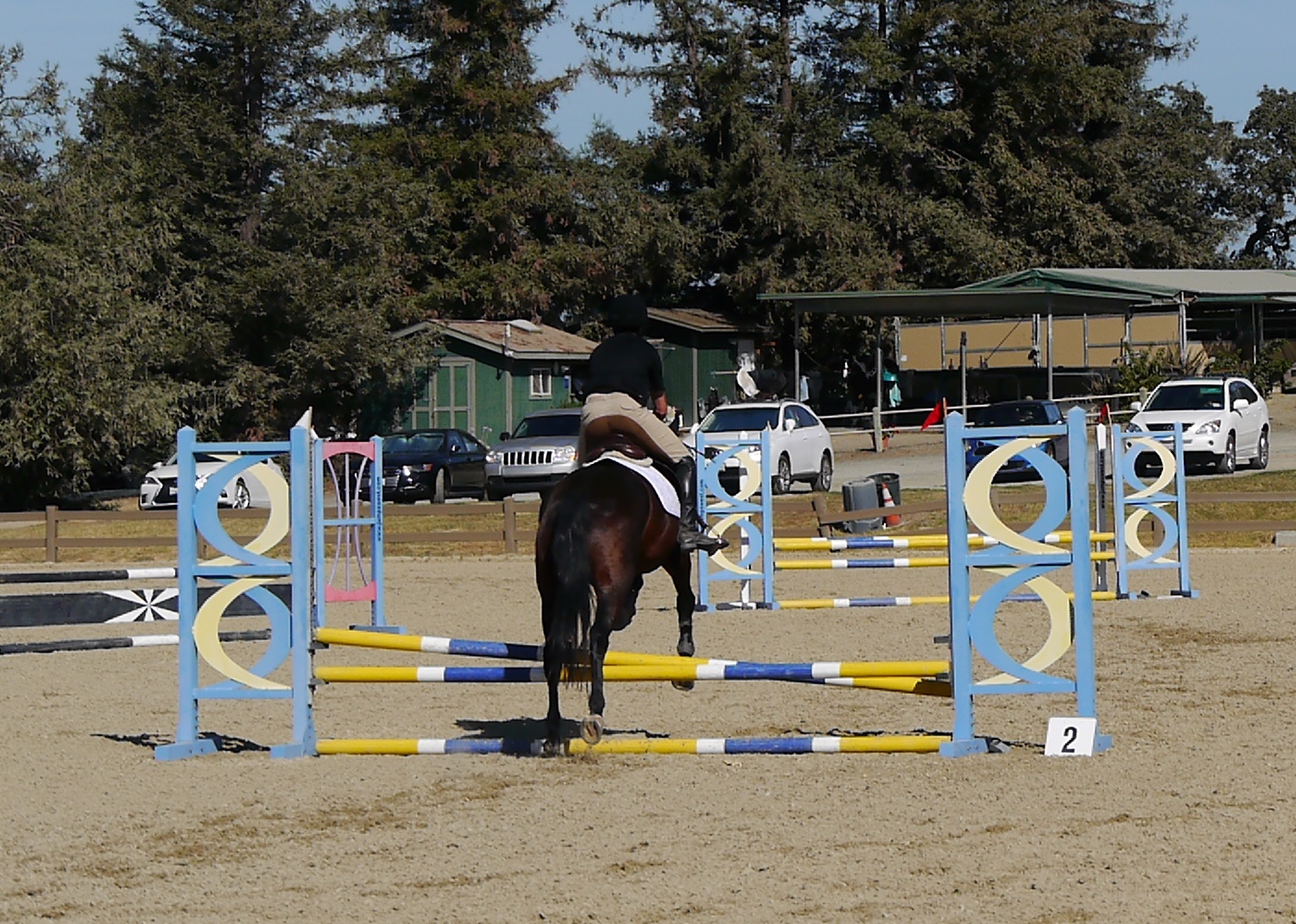 I think they had three poles out of 9 jumps. About par for the course with Eugene. I somehow failed to get ay good pictures of the jumps they cleared, but here’s a happy Eugene cantering off from the last jump. Then it was time for dressage. 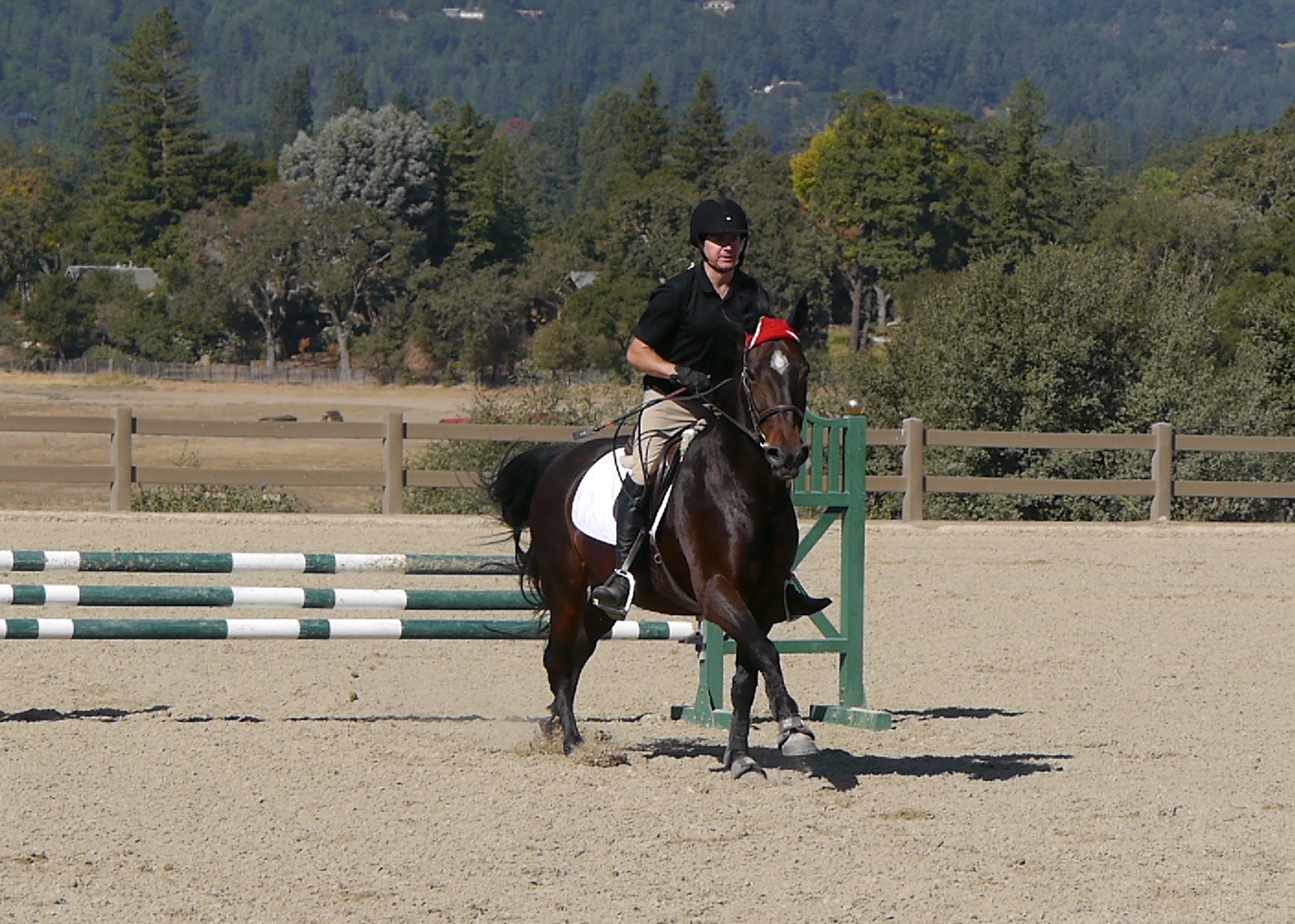 I won’t go through the every movement of the test, but it was okay. The judge’s final comments were “Well matched pair. Work on relaxation and rounder topline.” Relaxation is definitely something Eugene lacks in dressage. It’s why we keep taking him to schooling shows so he can get used to it. 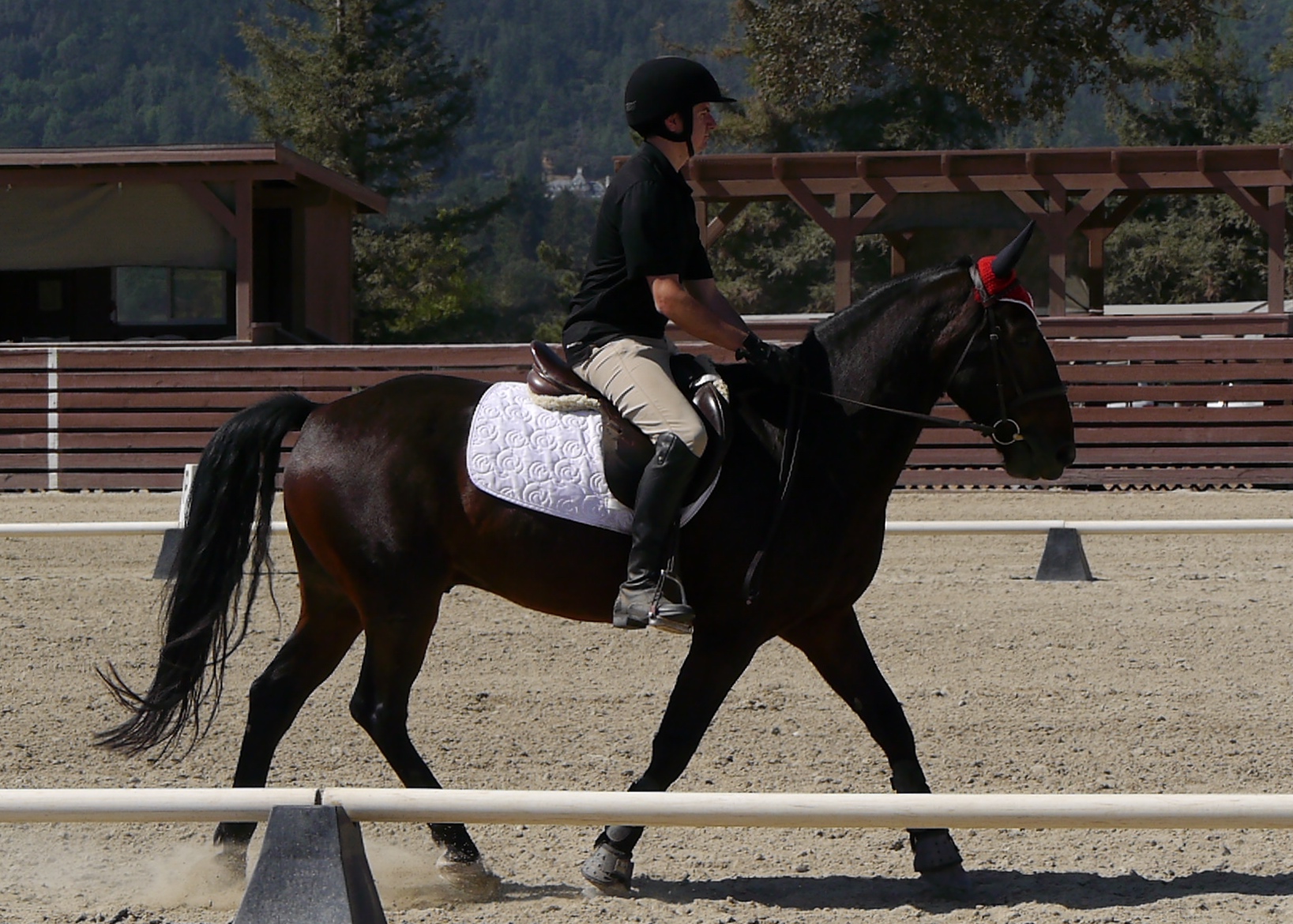 Looks pretty relaxed at this moment 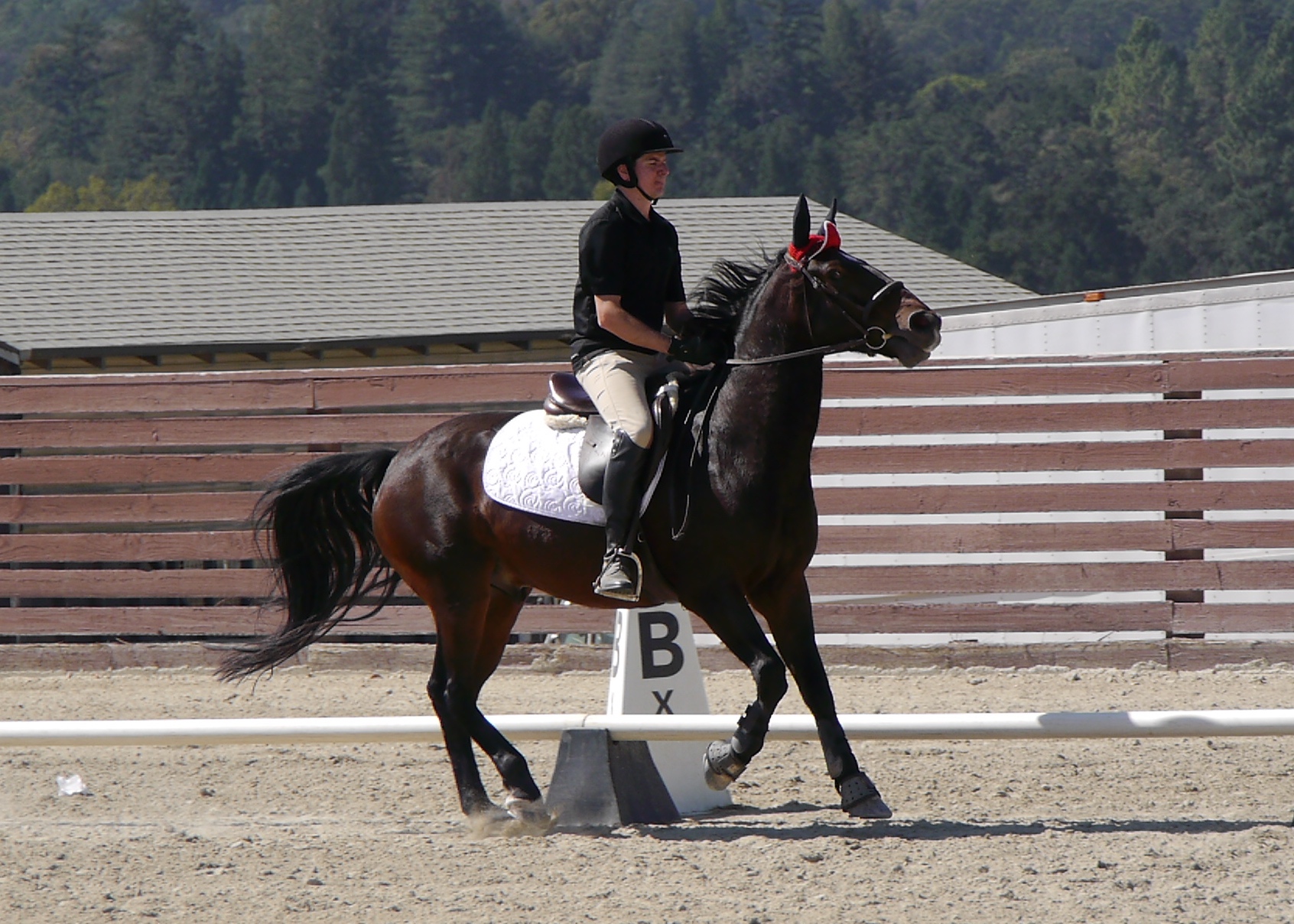 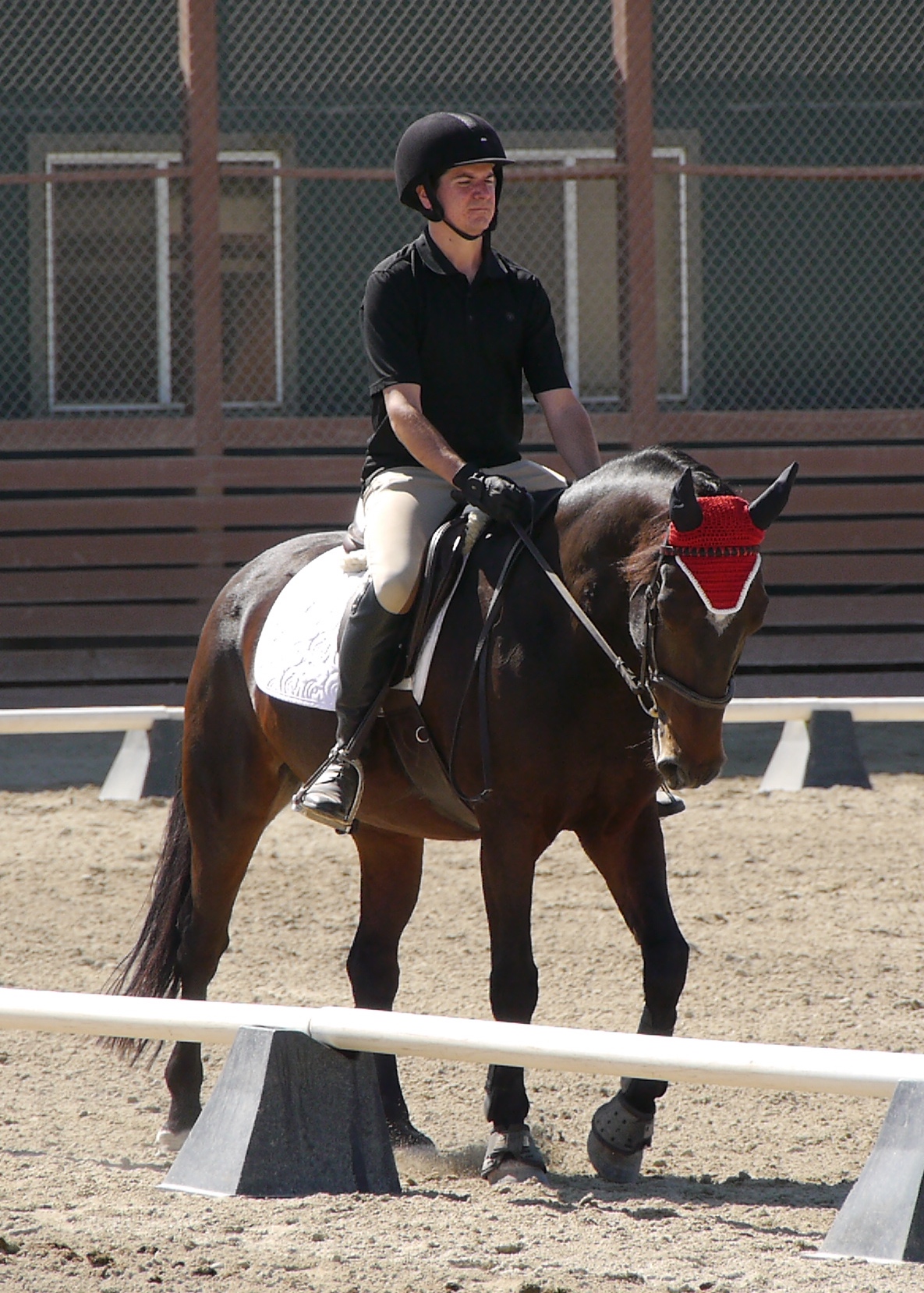 Good engagement at the walk at least

My husband stared at the 3rd jump so Eugene politely stared at it too. Then he jumped the first half of the oxer and and crashed into the back so hard he took down the standards as well as the pole. I sadly missed a picture of it. 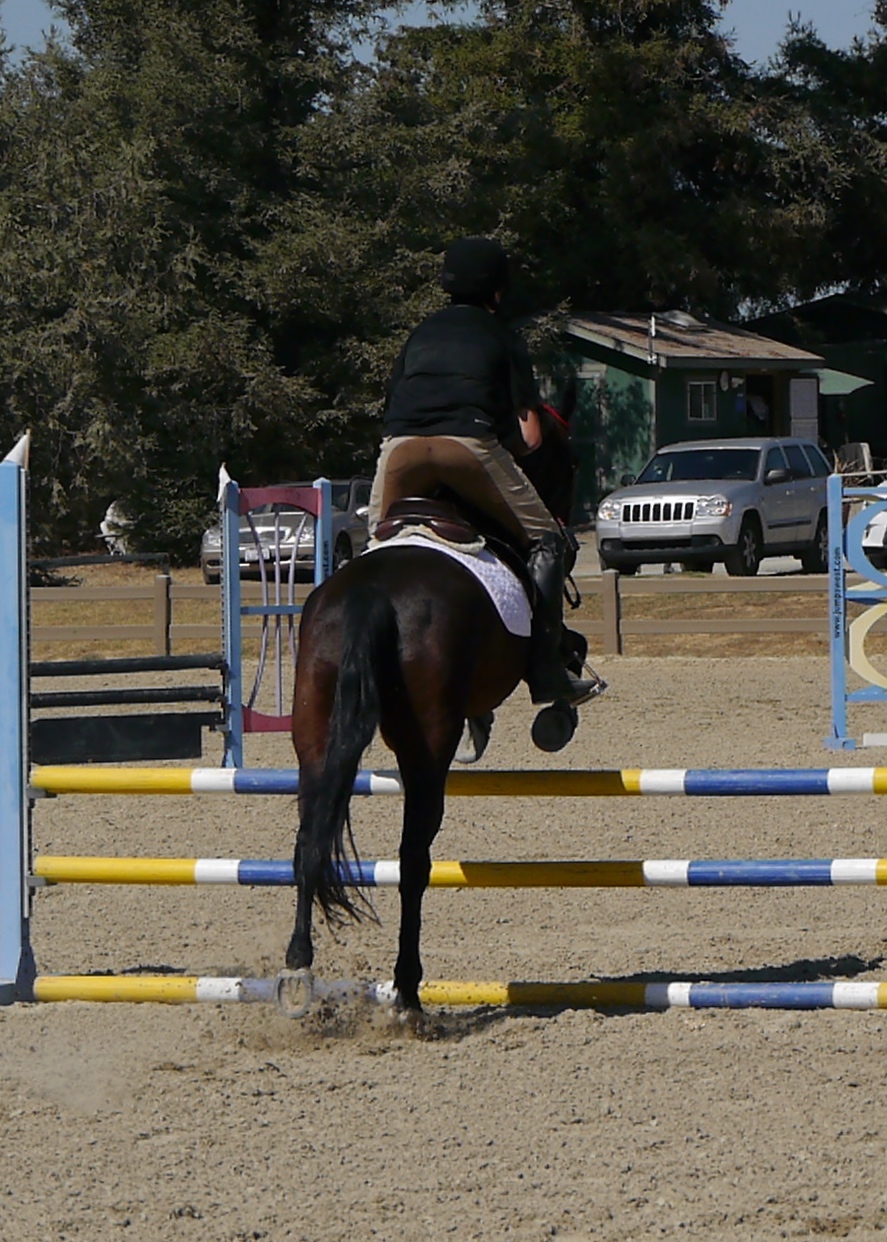 No grudges were held though and he cleared #4 and #5 before knocking another rail at #6. Then they were clear through the end. 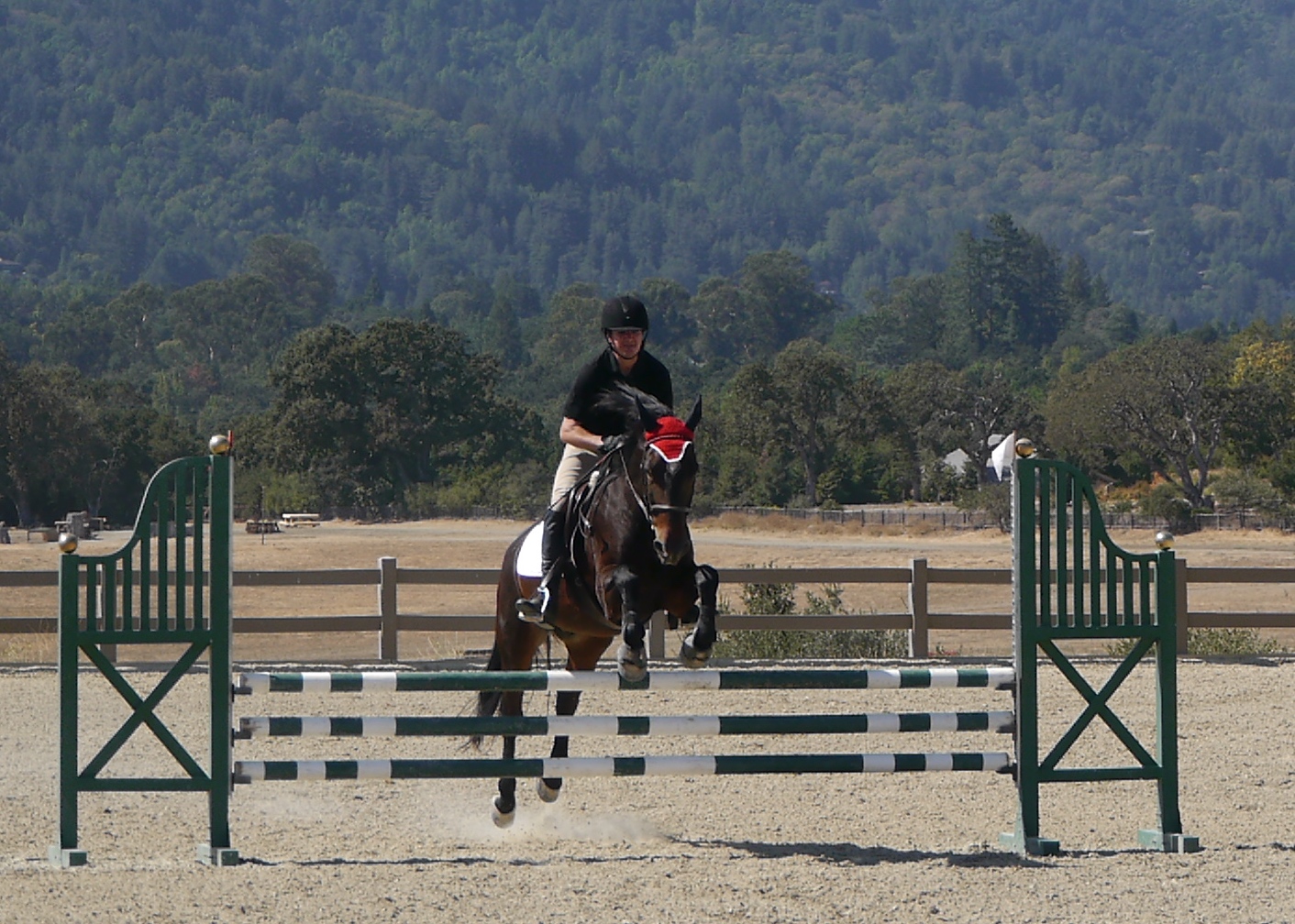 They had a little break while someone else went and then back in for another turn. That’s another nice thing about ticketed rounds; you can do the same course as many times as you want. 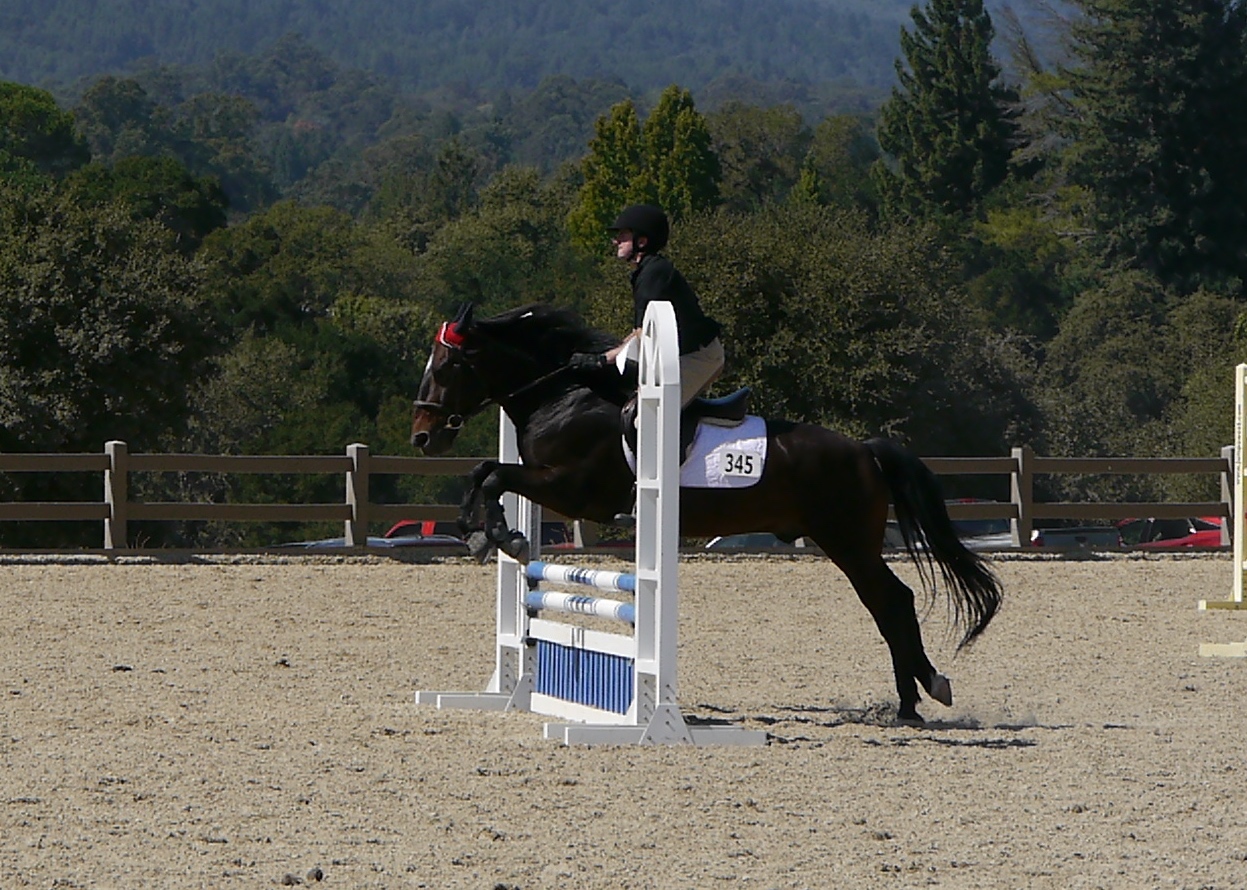 This time they popped over #3 without a problem and then knocked #4 and #5. I was behind the action for #5 so I didn’t realize it, but my husband said it was such an awkward jump, he landed in front of the saddle. 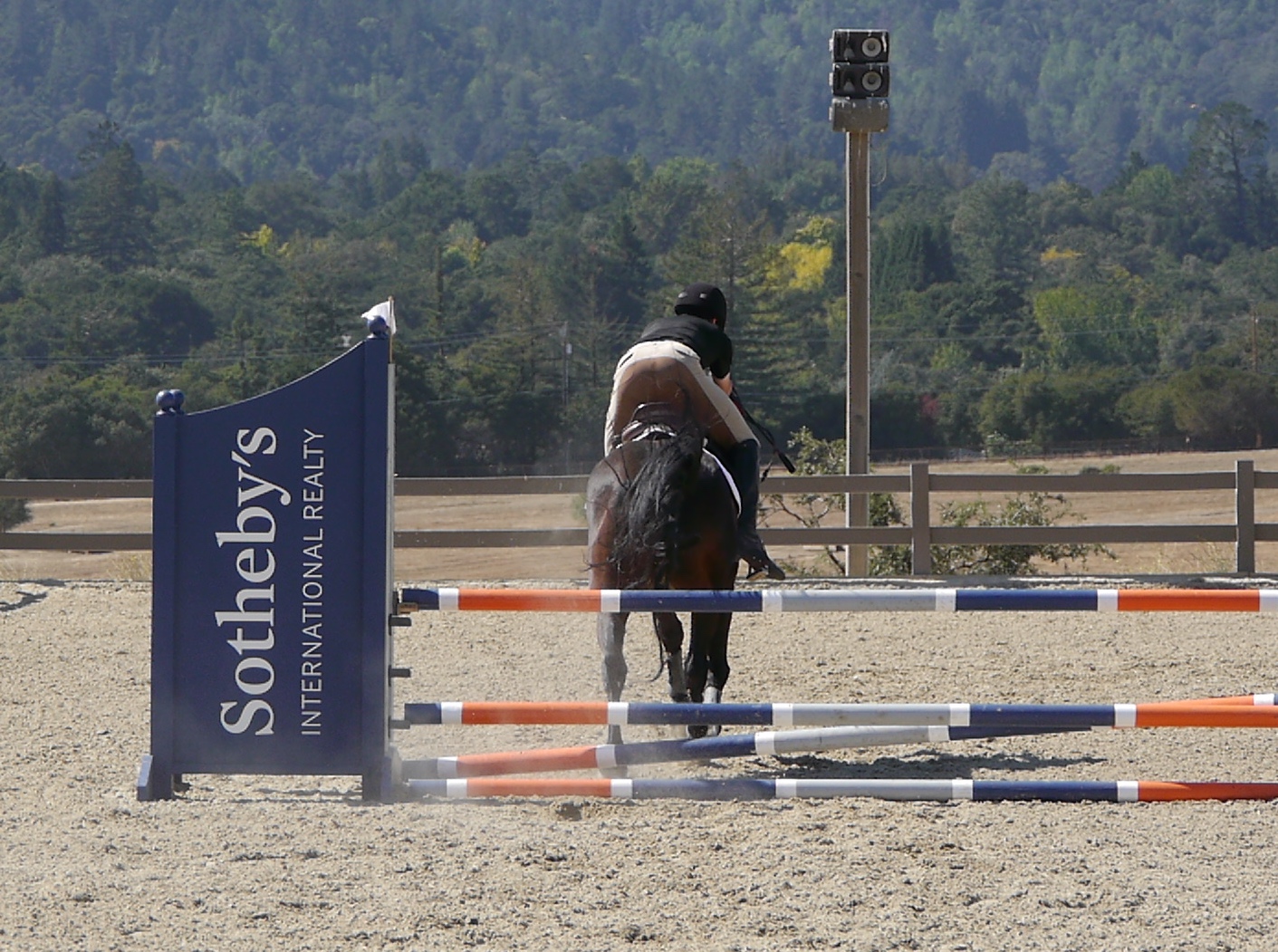 They recovered though and go over #6, #7, and #8. Levi took that moment to move and yank my hand so the picture looks like this, but it was a good jump: 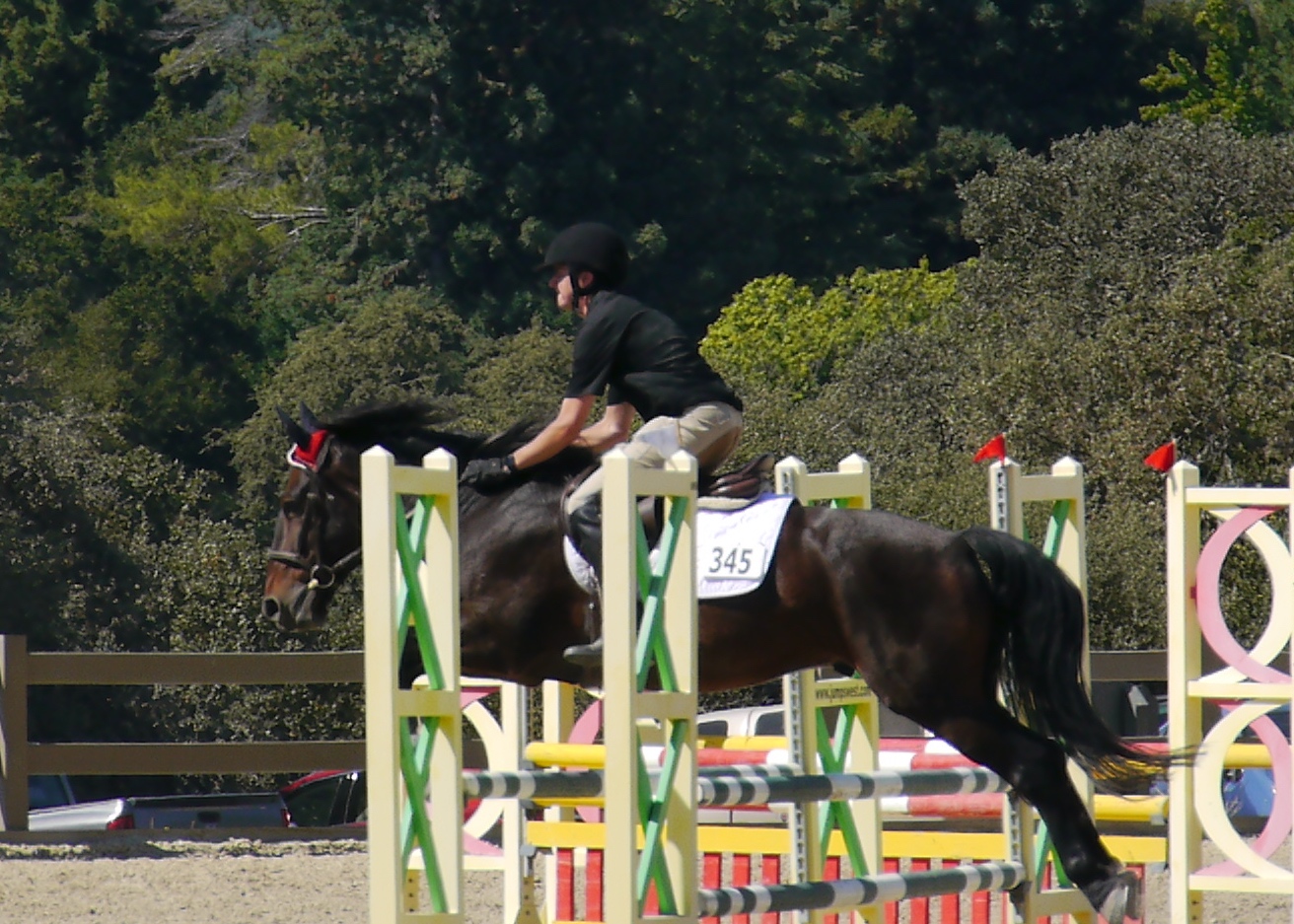 I think if they combined the 2 rounds, they’d have a clean round. It’s not like Eugene has any particular issue with a type of jump. He just needs to figure out how to jump all of them cleanly every time. Eugene got Sunday off and then we had a lesson Monday morning on just that topic. Stay tuned.

14 thoughts on “Eugene at JK Presents”