My husband entered the elementary division with Eugene. It’s interesting to me just how much these divisions differ across places. When I did Camelot Intro, the dressage test was BN and the jumps were 2′. At Eventful Acres, the test was Intro and the jumps were all under 18″ and I’d say most of them were 1′. My husband was happy about the Intro dressage test although I’ve told him he could do BN and I think he will at his next show. The jumps were too small, but Eugene would not have been ready for the BN test at this show.

In warmup, Eugene had the same issue that Nilla had. It was just much too exciting to be running around in a cross country field with other horses. He got very tense and rushy. As an endurance horse who can do 25 miles and still have energy, there’s no amount of lunging or extra warmup that would tire him out. So my husband did what he could to get him stretched out and at least point him at all the scary things. 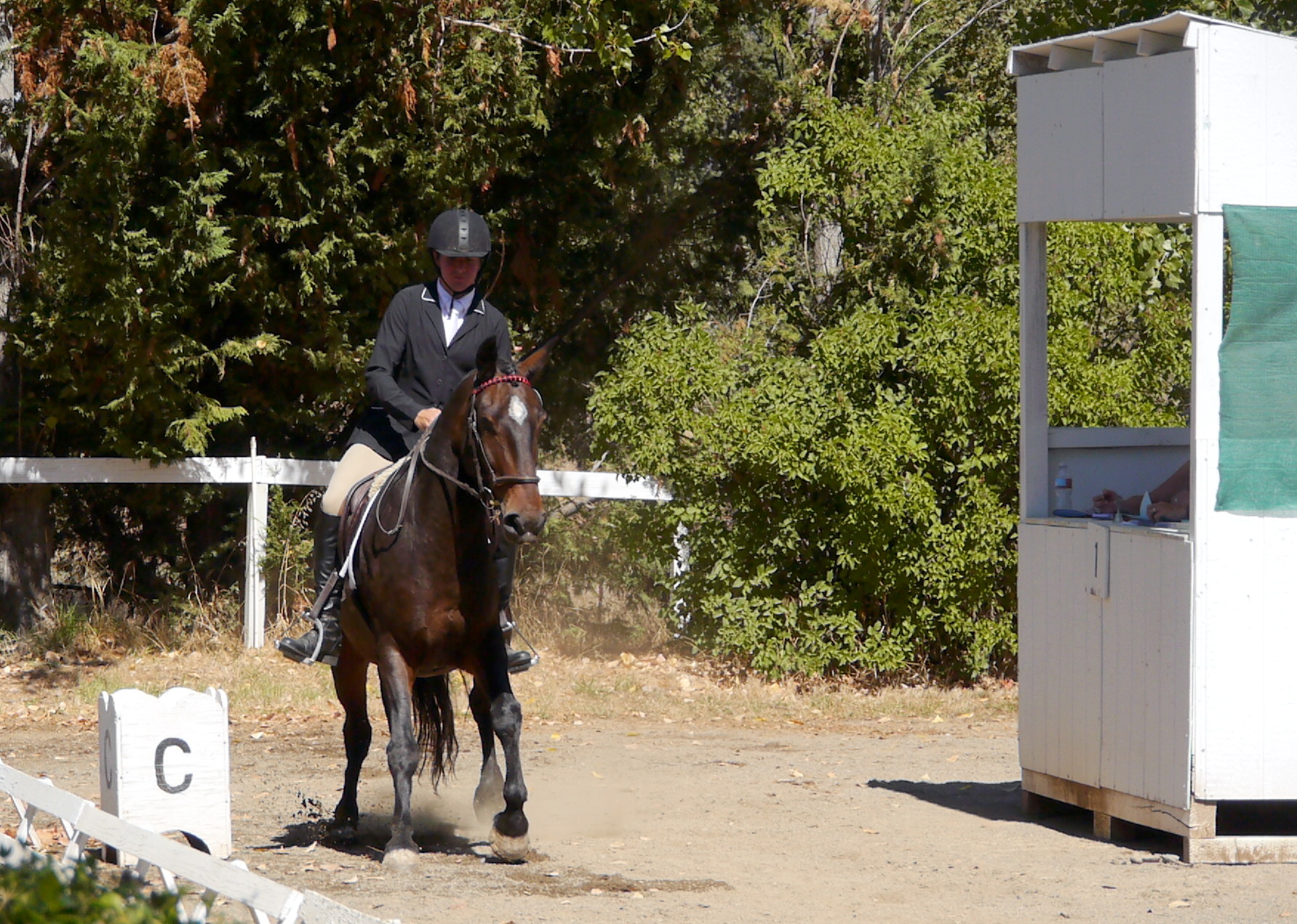 The test went okay. Eugene was very tense. We both thought his test the weekend before at RDLA was much more relaxed. 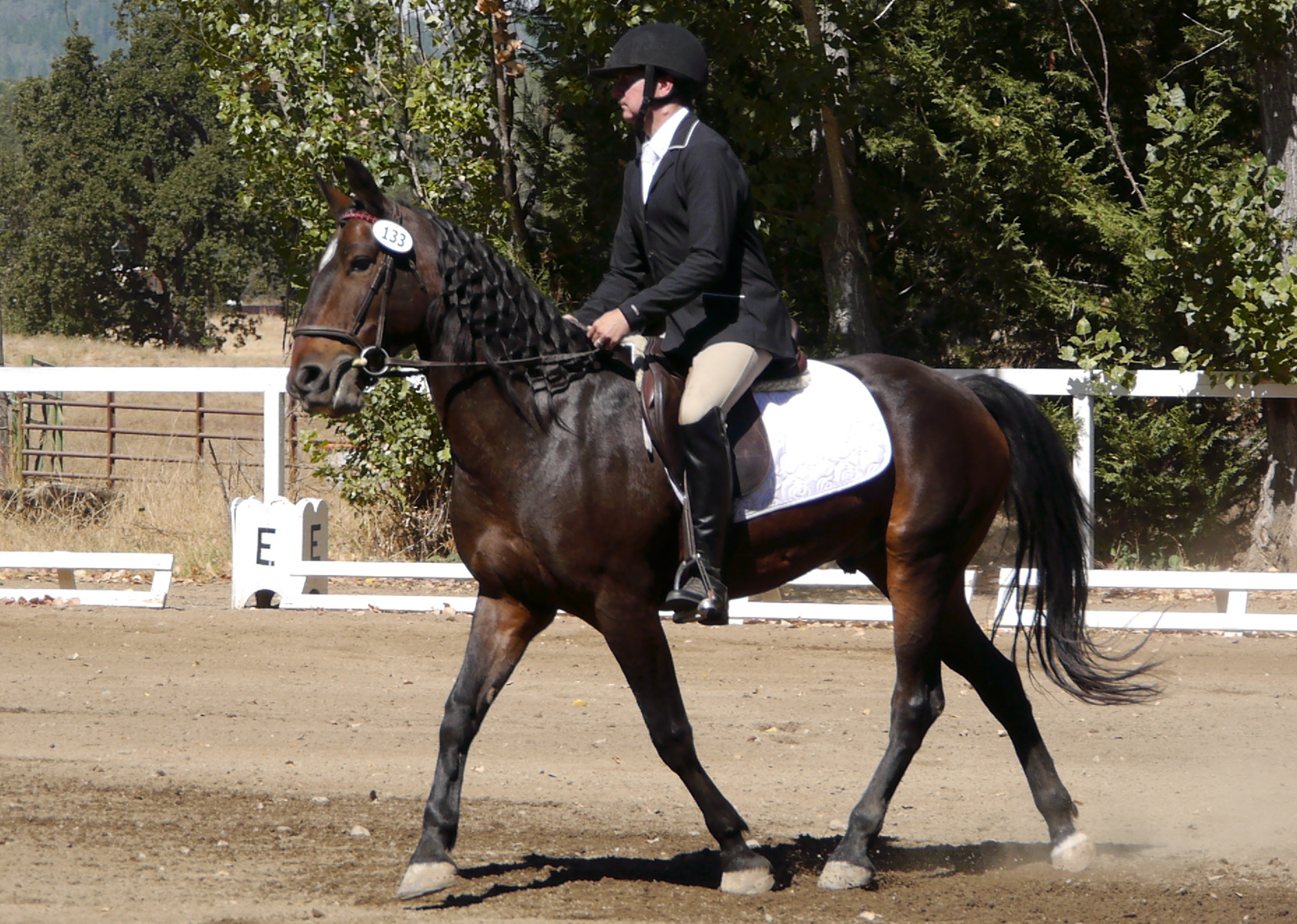 The judge’s comments agreed. Some notes of “tense” and “stiff.” He did get a 7 for opening halt. Eugene is so good at halt. He’s also good at posing for the camera. 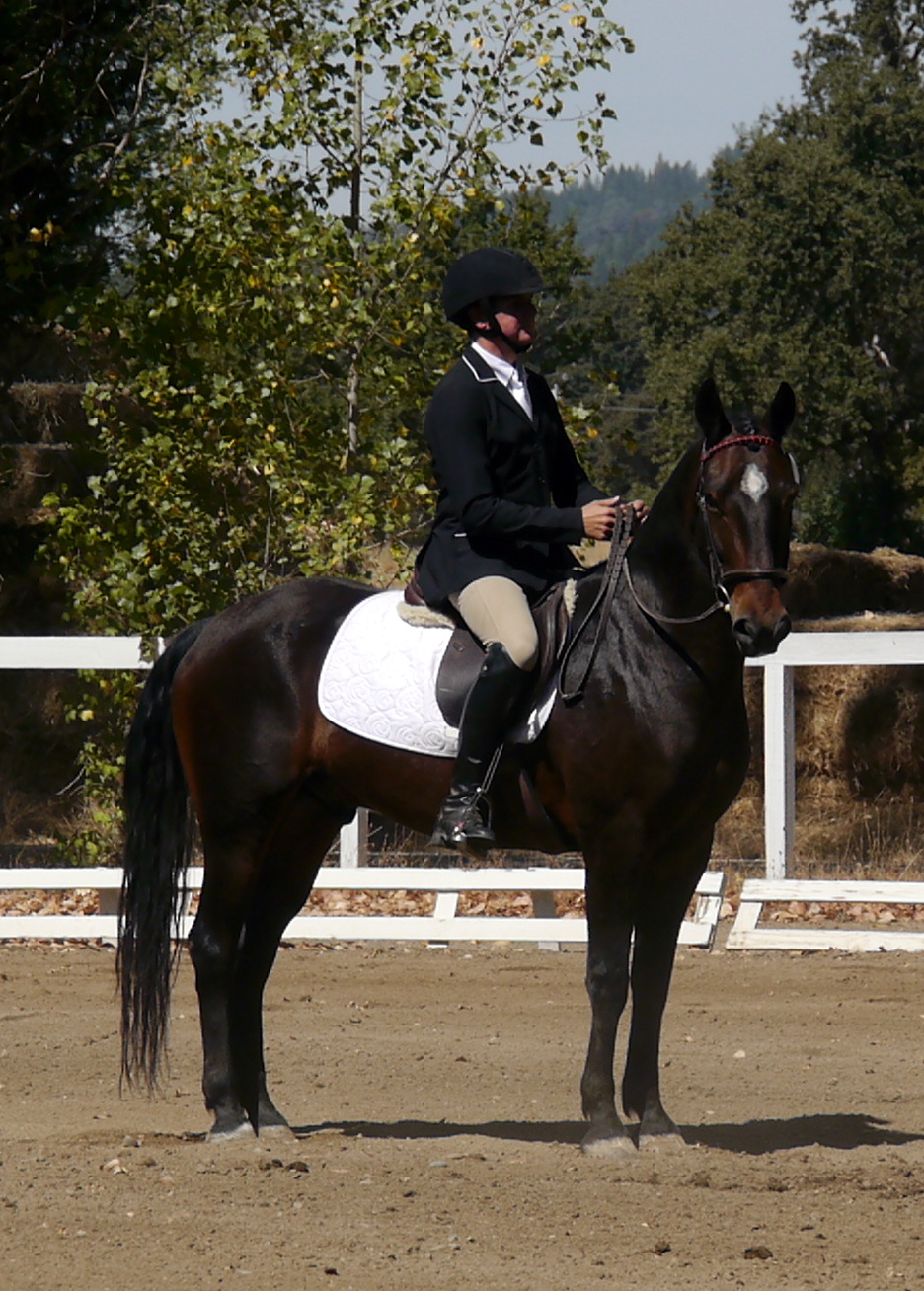 They got a 40 for dressage and were in 3rd place out of 4 going into Stadium. For stadium, the warm up ring was absolute chaos. Much worse than I’ve seen even at H/J shows. While my husband was in Senior Elementary, there were 14 or so kids in Junior Elementary and they were all riding like nuts. It was so crazy, the ring steward even got on the speaker to remind people how to ride in the warm up. (pass left to left, only go the one direction over the jumps, call out your jump, etc).

Eugene was getting more and more anxious so I just told my husband to come stand outside of the arena and avoid all of that. The jumps for his division were all cross rails and we knew Eugene could do them, though he might be a bit squirrelly now that he was all hyped up. I told my husband to trot most of it and only canter when I felt like Eugene was really listening. 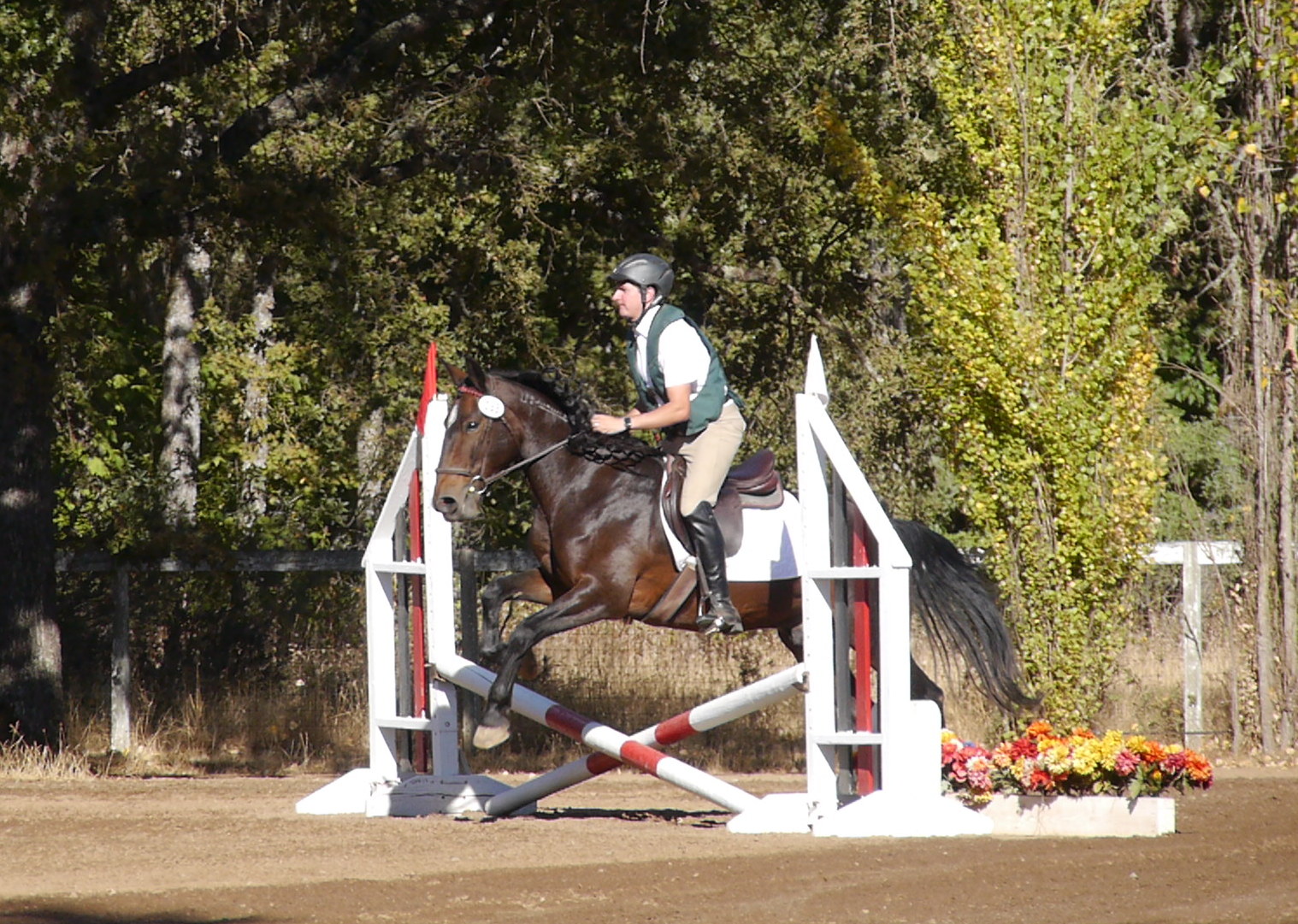 They were clear, but did pick up 4 time faults for all the trotting. They moved up to 2nd place although my husband was upset about the time faults as he would have moved up to first if not for them.

The XC course for Elementary was really easy. Like tiny little logs and two of the “jumps” were just mounds in the arena. So my husband had no concern about this course.

The warm up arena was once again chaos. The show has a rule about no warm up until 20 minutes or 10 horses out and the ring steward was actually kicking people out if they were there too early, but even 10 horses at the Elementary level careening around a small warm up is really too much. Once again, I pulled my husband out and just made him stand to the side and let Eugene relax.

I went out and managed to get a few photos of them on the course in addition to the video. 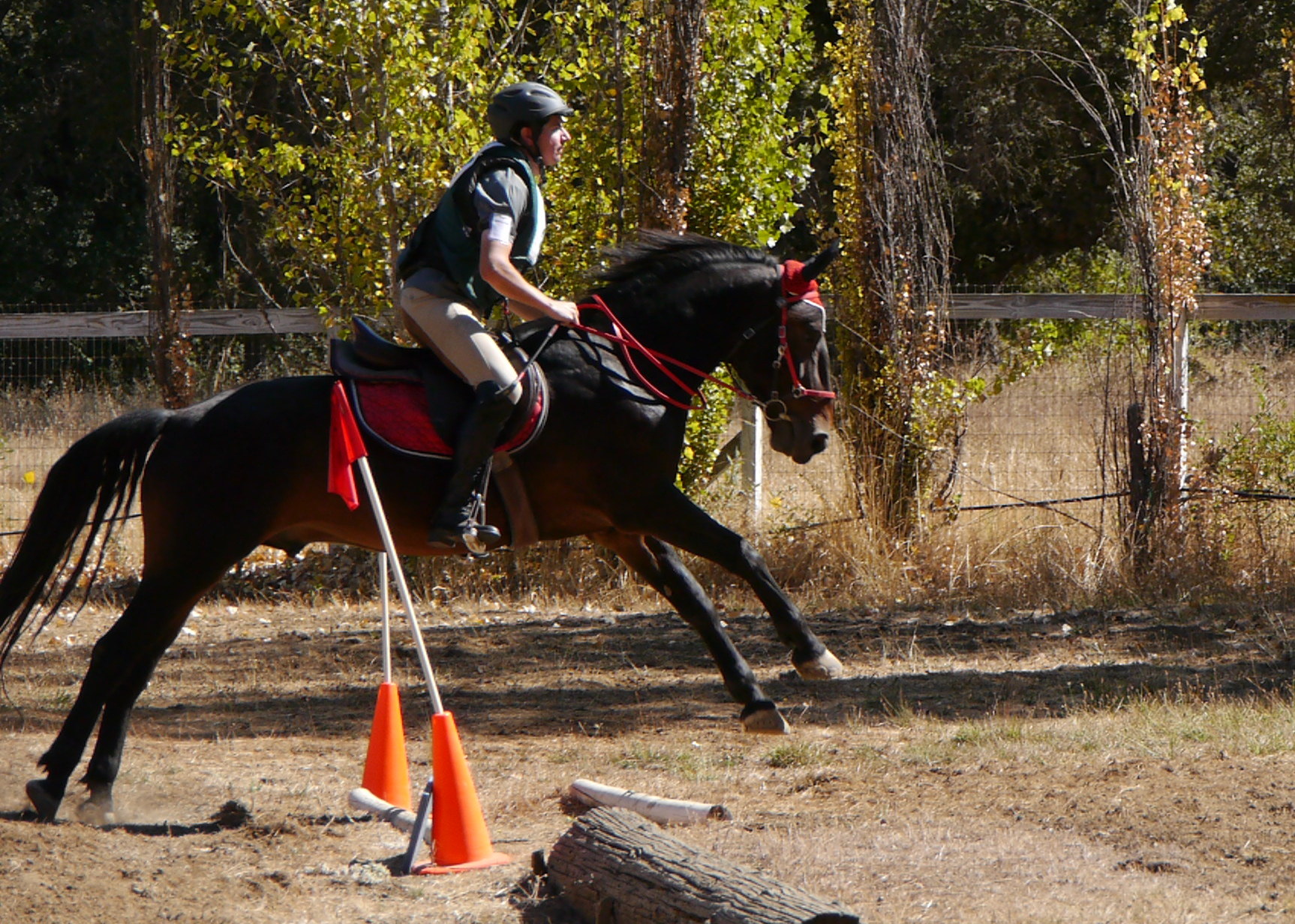 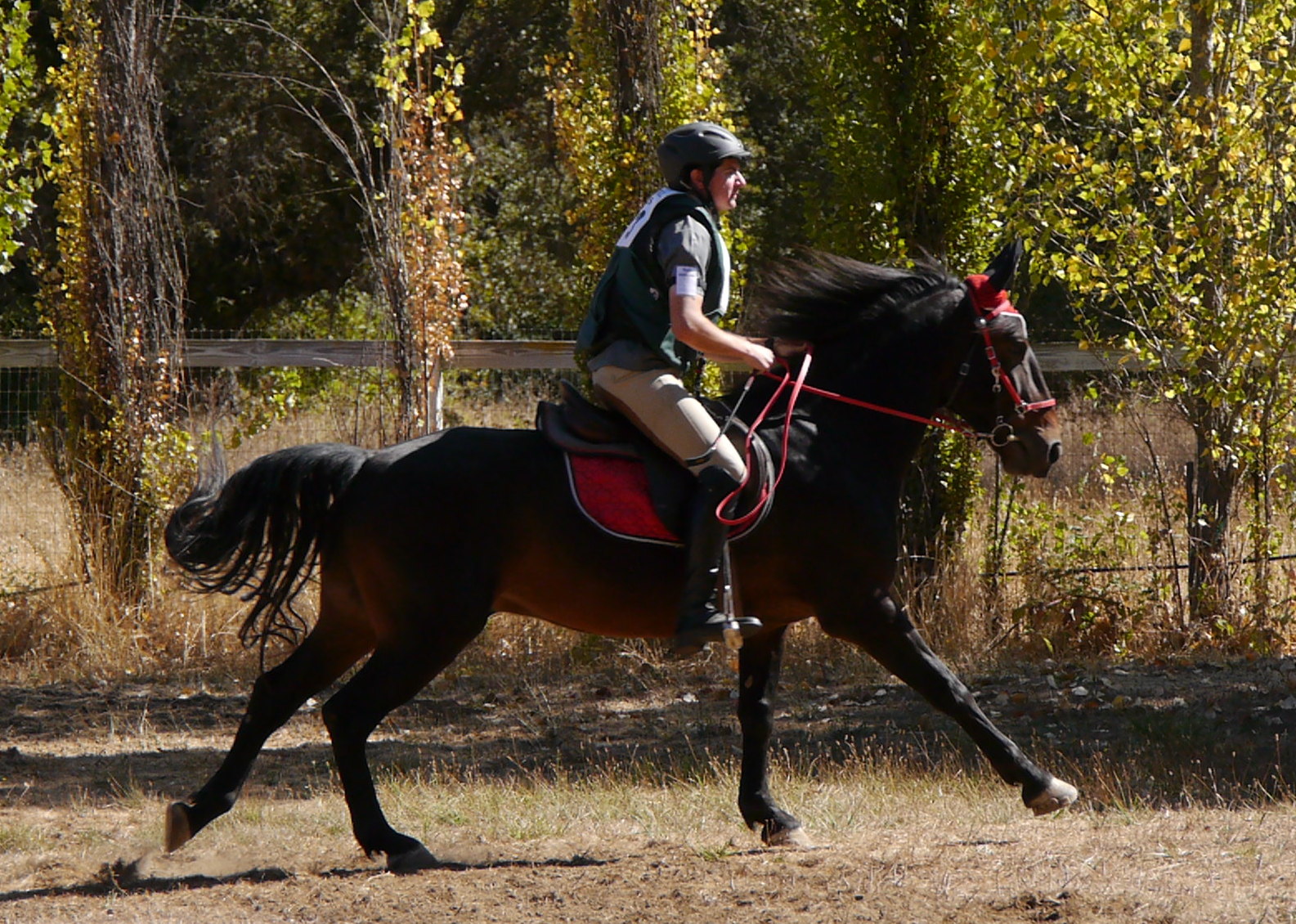 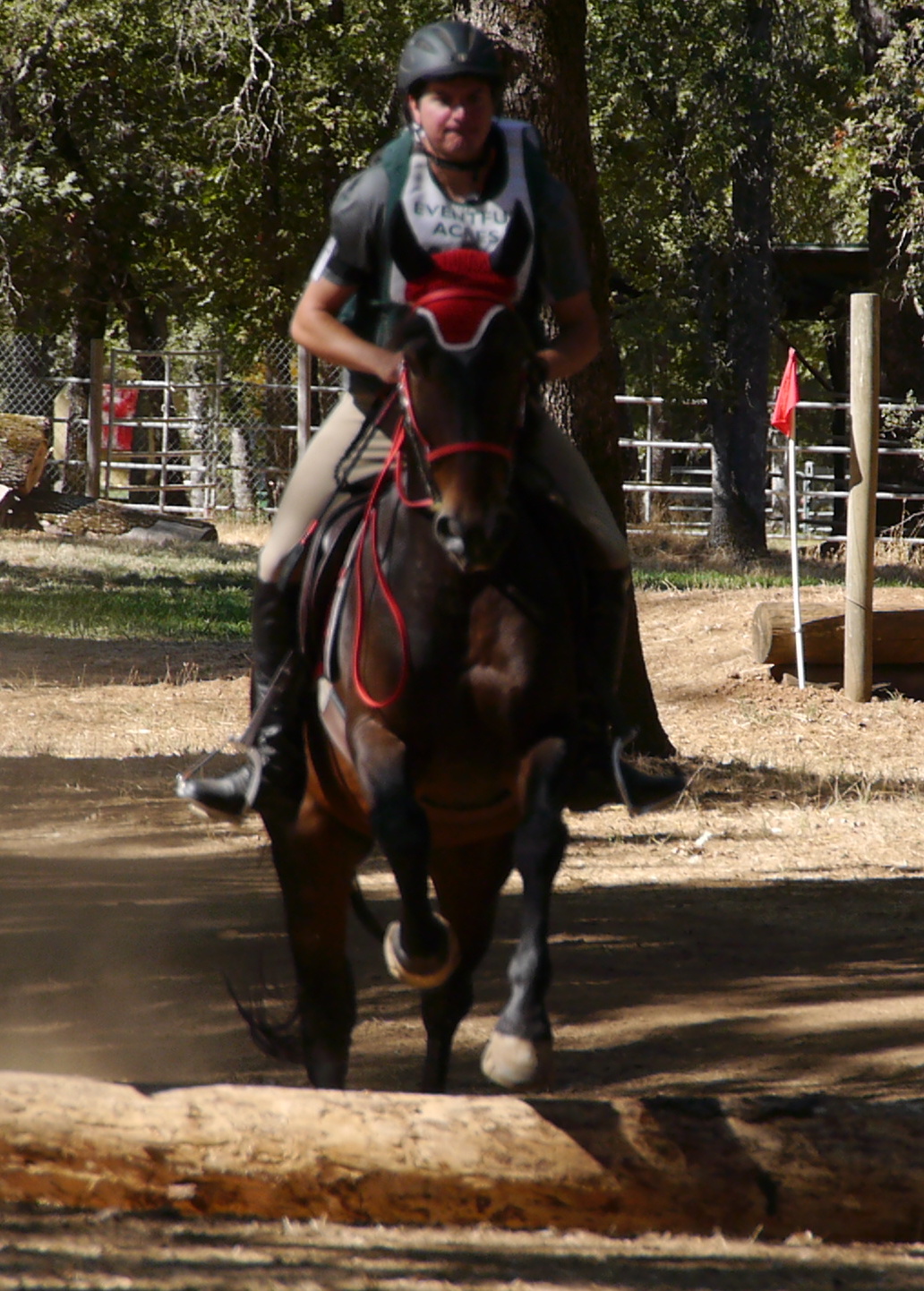 If you watch the video, you’ll see that my husband almost missed #8. Well, it turns out the person in first did miss the #8 jump so they were eliminated and my husband moved up to first. My husband was pretty excited to finally to win a class with more than one other person in it. He got a ribbon, a bag of treats, and a certificate for a free day of schooling.

While Eugene is a very good Mustang, he is still very green. Our biggest take-away from this show was that he needs to go to a lot more shows. Especially ones with crowded, crazy warmups. Every time he goes somewhere he gets better, so we just need to keep taking him places.