Eugene is actually the reason we go to all the shows. While I like taking Levi for exposure and fun, he’s not really competitive. Nilla just needs training; she’s the same at home and at shows and at this point it’s not worth taking her to shows unless it’s for fun. Eugene, however acts very differently at home than he does at shows. He’s not bad, he just gets very tense and giraffes more than usual, which really hurts his dressage scores.  We’re trying to take him to as many random, cheap schooling shows as possible to help him get over it.

Last time we were here the judge was very favorable to my husband and Eugene, but their main competition was another dressage horse and some other less schooled horses. This time around the other horses were nice, true hunter horses. And Eugene was his usual giraffe-y self. 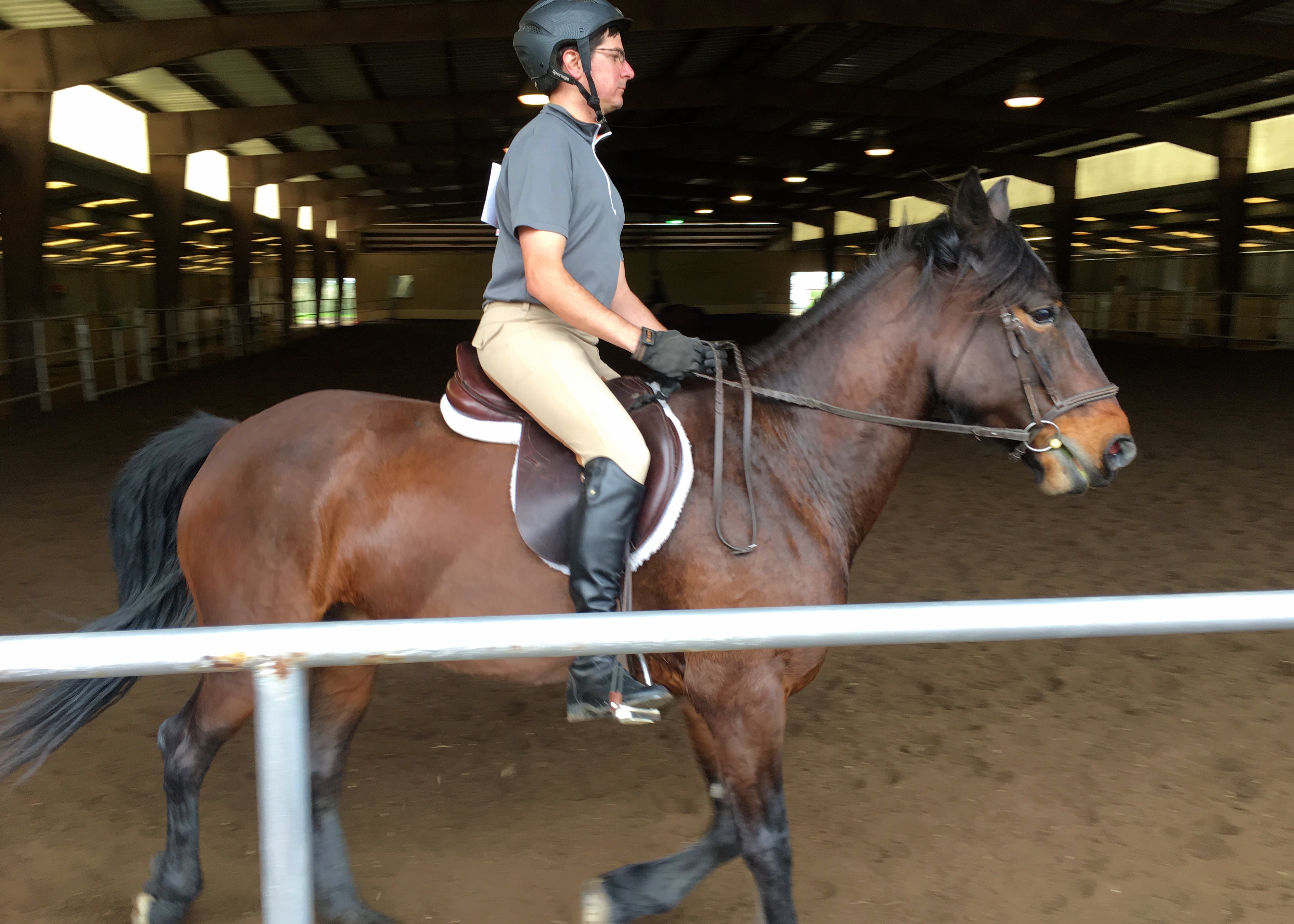 They got 2nd of 3 in 18+/AA Hunt Seat Equitation and 3rd out of 3 in Hunter Under Saddle. The following picture is terrible as a picture because it’s really hard to take shots of moving horses in an indoor with an iPhone, but it’s a good example of the difference between Eugene and the other two hunter horses. This is not to say that we want Eugene to look like a hunter, but he doesn’t look like a dressage horse either. 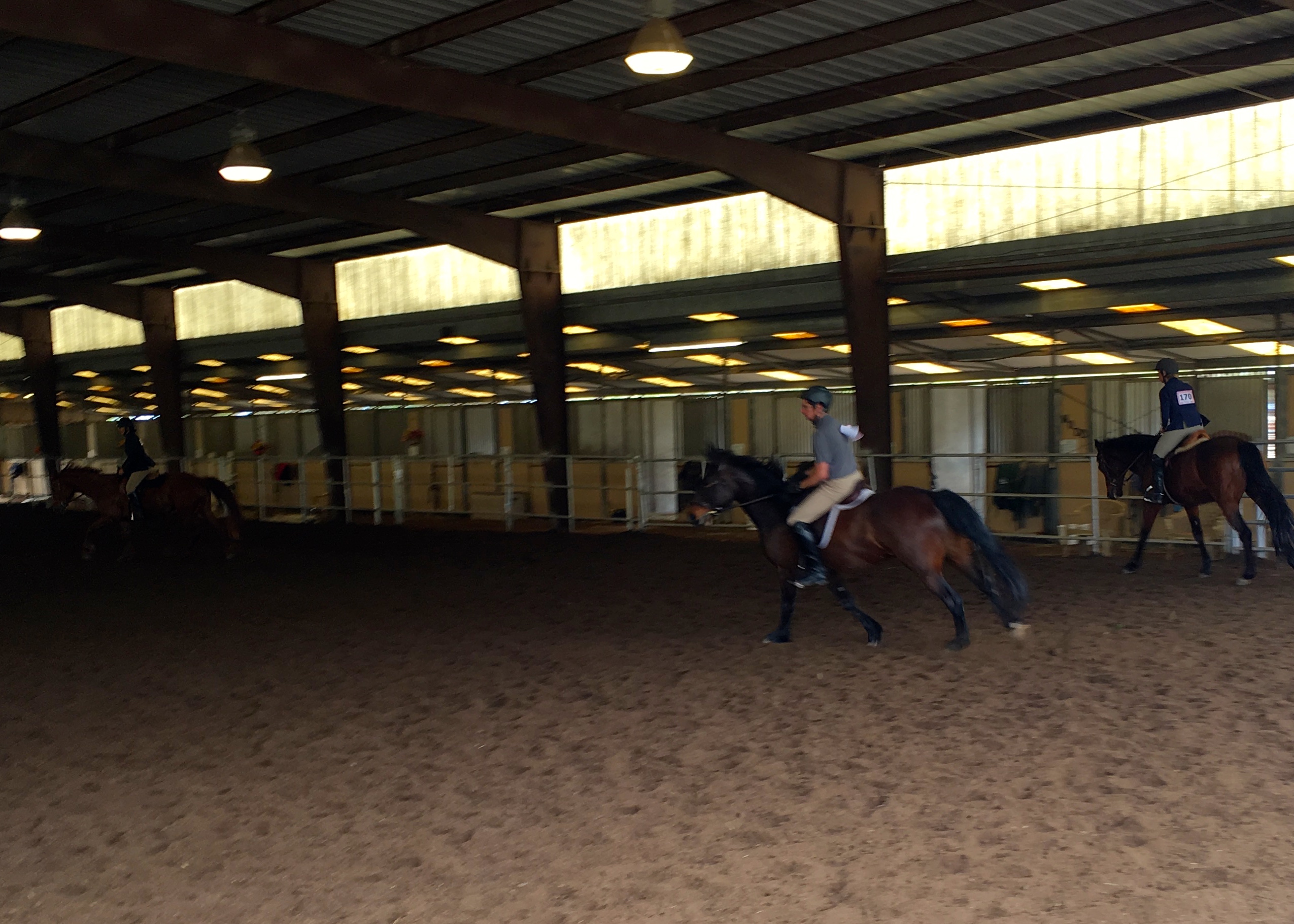 As I said in my previous post, my husband did the 18″ Hunter Hack, which was run simultaneously with my class so no pictures, but they actually got first in this class (out of 3). Hunter Hack allows for a more forward pace than regular hunters so Nilla and Eugene often do better in these classes. 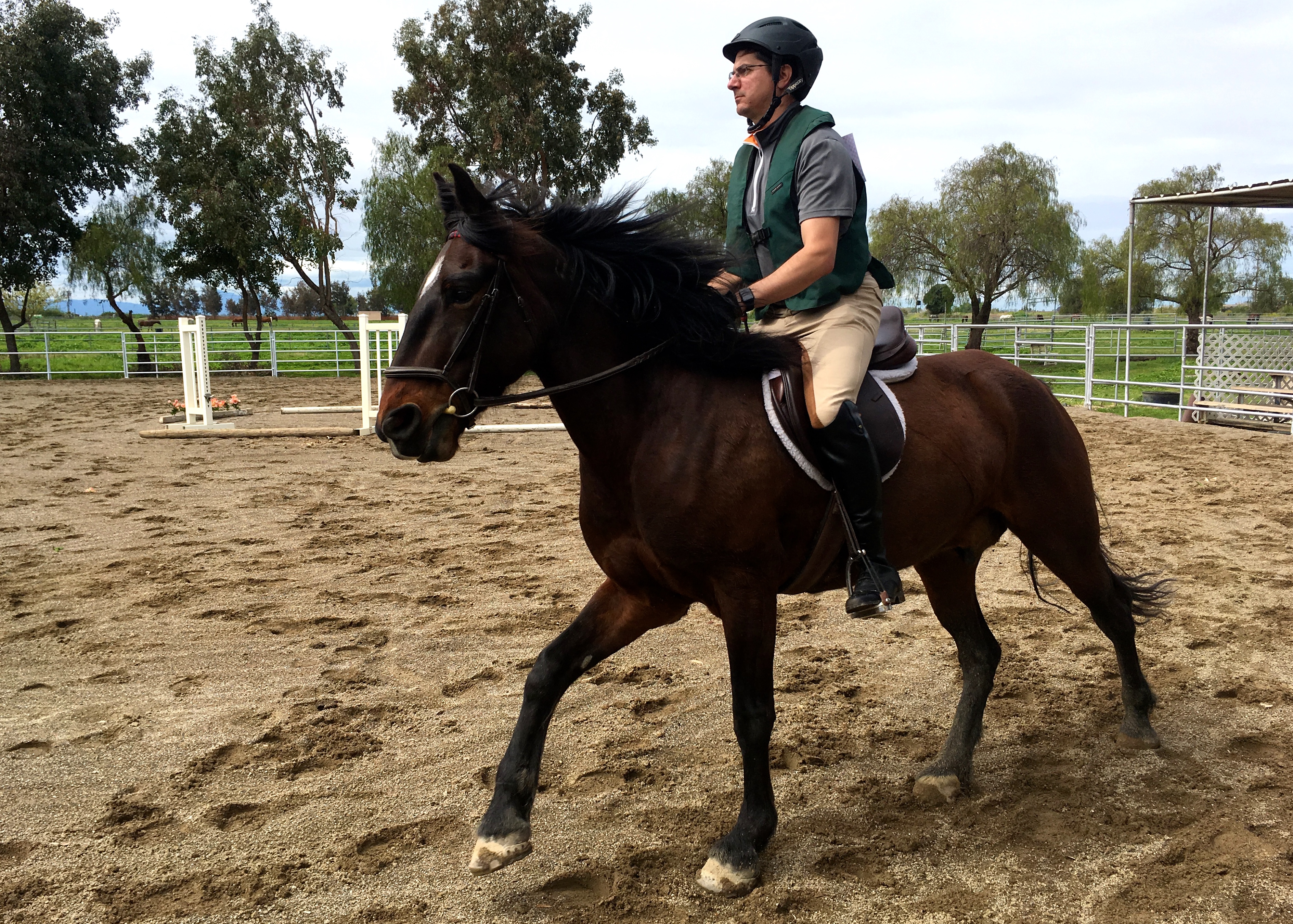 One great thing to see with this show was just how well Eugene did with jumping. He’s basically had all winter off from jumping since our arena has been closed for most of the year. The last time he did a course was at our previous D’Alanzo show. He went in and got right down to business and looked happy to do it. 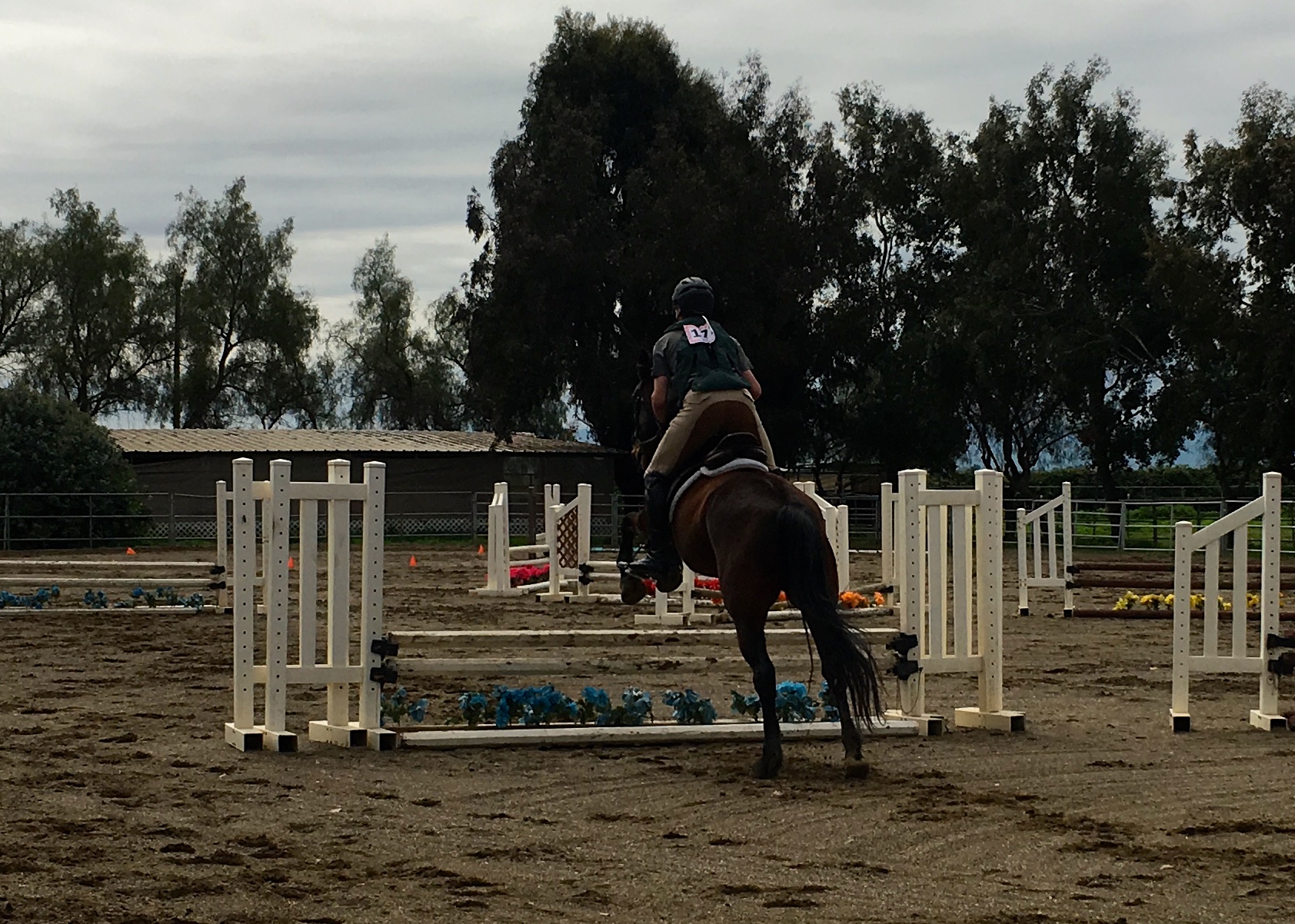 They also did the 21″-2′ Hunters and Eugene got 2nd out of 2 or 3 (we can’t remember). He was nice and forward, but had a few wiggly lines. They ended on Low Hunters (2’3″ -2’6″) but really all 2’3″. The footing was pretty good for how wet it’s been, but still a bit sloppy in places and the management had warned they might cancel the higher jumpers. They even coned/poled off a few sections. My husband had originally planned to do some higher classes, but we didn’t want to risk an injury and stopped at the Low Hunters. 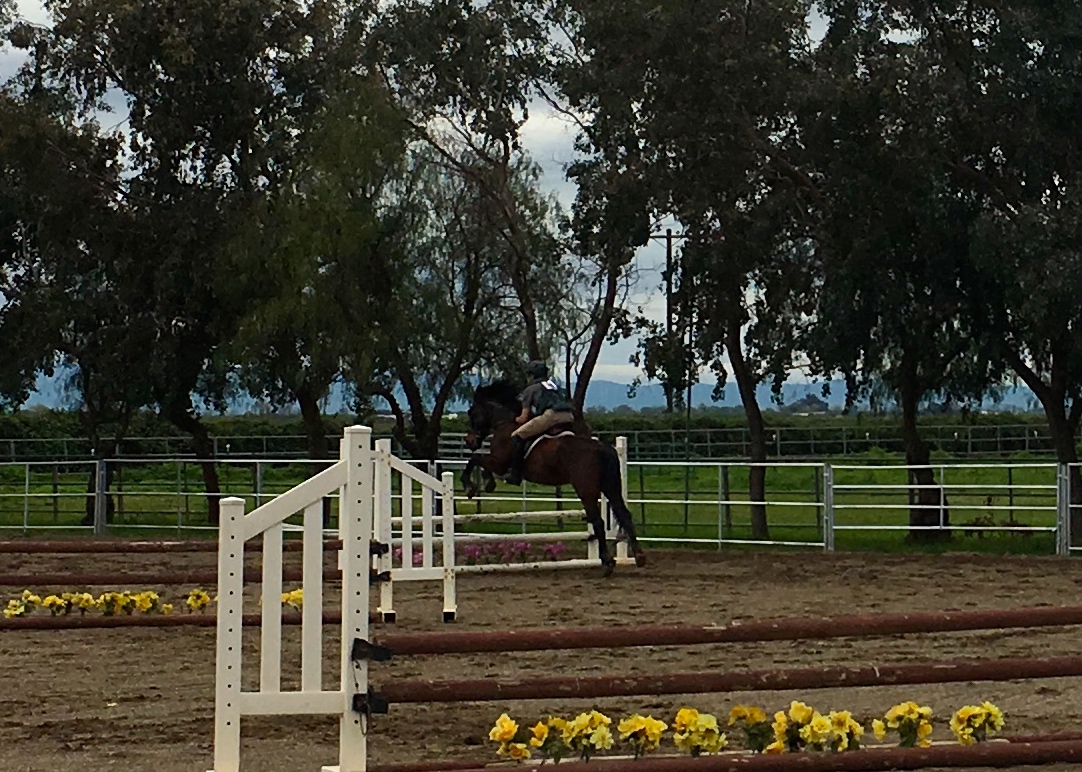 In the final class they scored 3rd out of 4 despite dropping a rail as one of the other horses was more rushy and knocked a few (although he didn’t drop any, he did hit a bunch). We were both still surprise that a dropped rail wasn’t worse. Eugene actually only hit the first one because he wasn’t paying attention and once he realized the jumps were high, actually picked his feet up (as you can see above). This is a frequent problem with Eugene and my husband really needs to get after him about staying tuned in and not getting distracted. But, this is why we we got to these shows. And we plan to attend a bunch more this month.

23 thoughts on “First Show of the Season for Eugene”