On Saturday, we trailered out to Fremont Older with Dijon’s leaser who is also leasing a Morgan horse at our barn named Phoebe. Since Fremont Older is close to our barn, we took Nilla and Shasta over and I tacked them up while my husband returned to the barn to get Phoebe. I didn’t drug her because it was such a short ride, so Nilla rubbed all of the skin off her hip in the ~7 minutes she was on the trailer. I do not know how to solve this problem…

The ride was really nice though. We took a short out-and-back trail that goes along the reservoir. Last year this time, this reservoir was so empty people were walking through the middle of it. This year, it actually filled up when we had a torrential storm in December. It’s starting to drop, but only a few feet so far.

We trotted and cantered along most of this trail. Nilla was even cantering for long sections. I was very impressed with her.

Then we rode up to the Vista Point. Along the ridge there were beautiful, clear views across the valley. We could actually see the Mt Hamilton Observatory all the way across the valley and up in the east bay hills. It didn’t show up in the picture though.

At the Vista Point, we stopped for a break and some photos. Unfortunately, my computer destroyed those images during uploading so I can’t share any of them.

We rode back down to the parking lot and took Nilla back to the barn by herself on the other side of the trailer. She exited coated in sweat and freaking out, but without any new injuries so I guess that’s something. I cleaned her up and medicated her wounds while my husband went back to get Shasta and Phoebe. 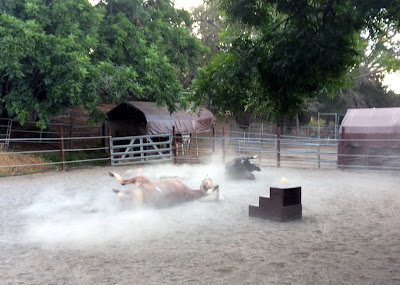 Nilla and Shasta enjoyed some simultaneous rolling before we put them away with their grain and hay for the evening. It was really great to get out and do ride with Dijon’s leaser on a horse that can go faster than walk/little bit of trot. She had a great time too as Fremont Older is her favorite park to ride in. It is a nice riding park as most trails are wide fire roads and the park is connected to a huge boarding/guided trail riding stable so it’s designed for horses. The only downside is that bikes are allowed. Most of the bikers we meet are great, but every so often one of them is an asshole who doesn’t yield or blows by the horses from behind. Luckily, none of ours care too much about bikes. But I would not take a bike-reactive horse to this park.