The XC course at Fresno opened for schooling at 1:30 on Sunday. Kate was planning to school a client’s horse and my husband wanted to school ditches, so we stuck around. Once Kate was done, she had me start by going over the little intro jumps and water. 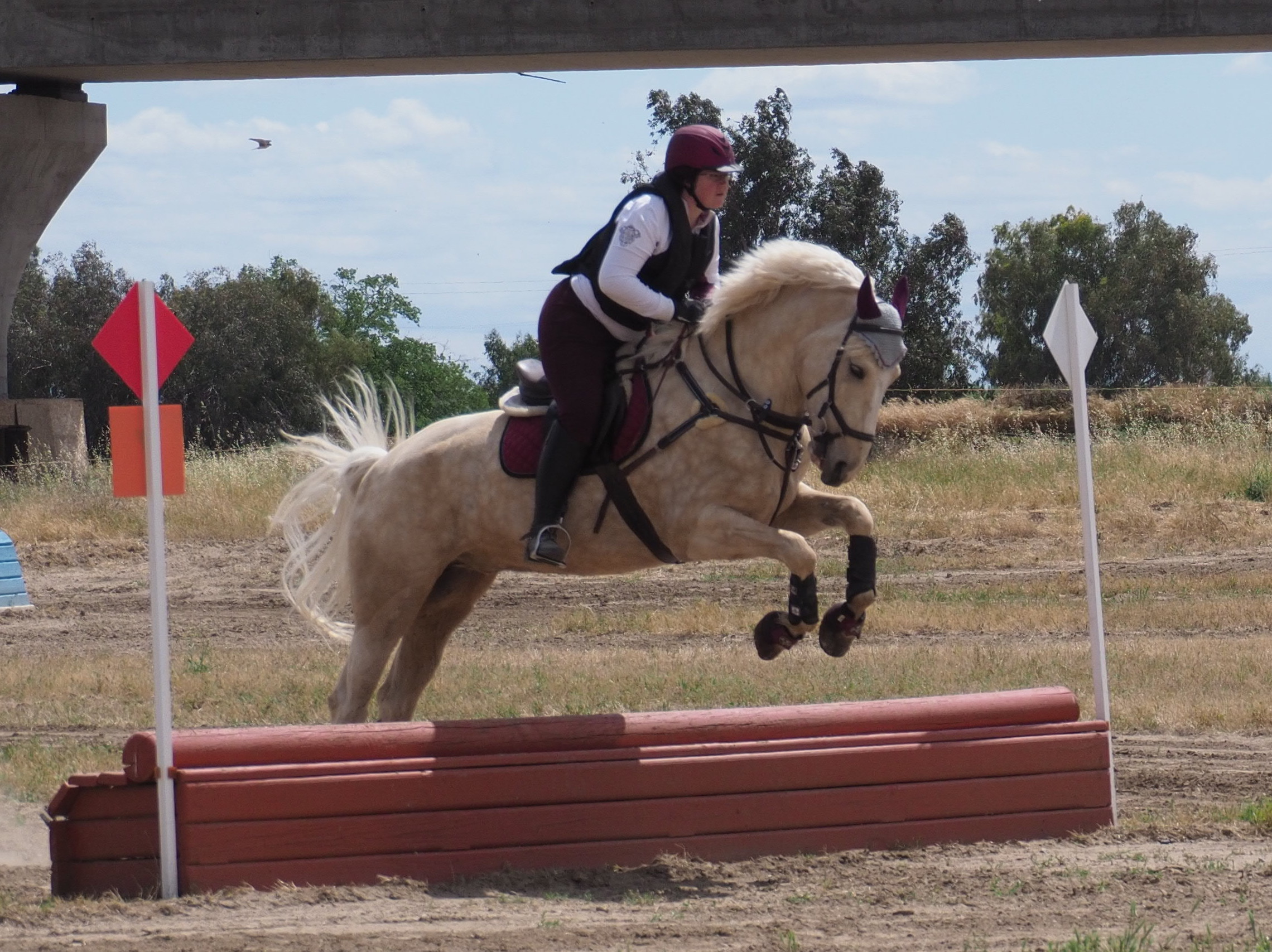 Levi was good about the little jumps, but then he threw a temper tantrum when I asked him to go away from the group to do a BN jump. Kate ended up walking out with me and we schooled the #9 log from the intro course both directions on a circle until Levi decided it was less work to just do the jump than to be a herd-bound jerk. 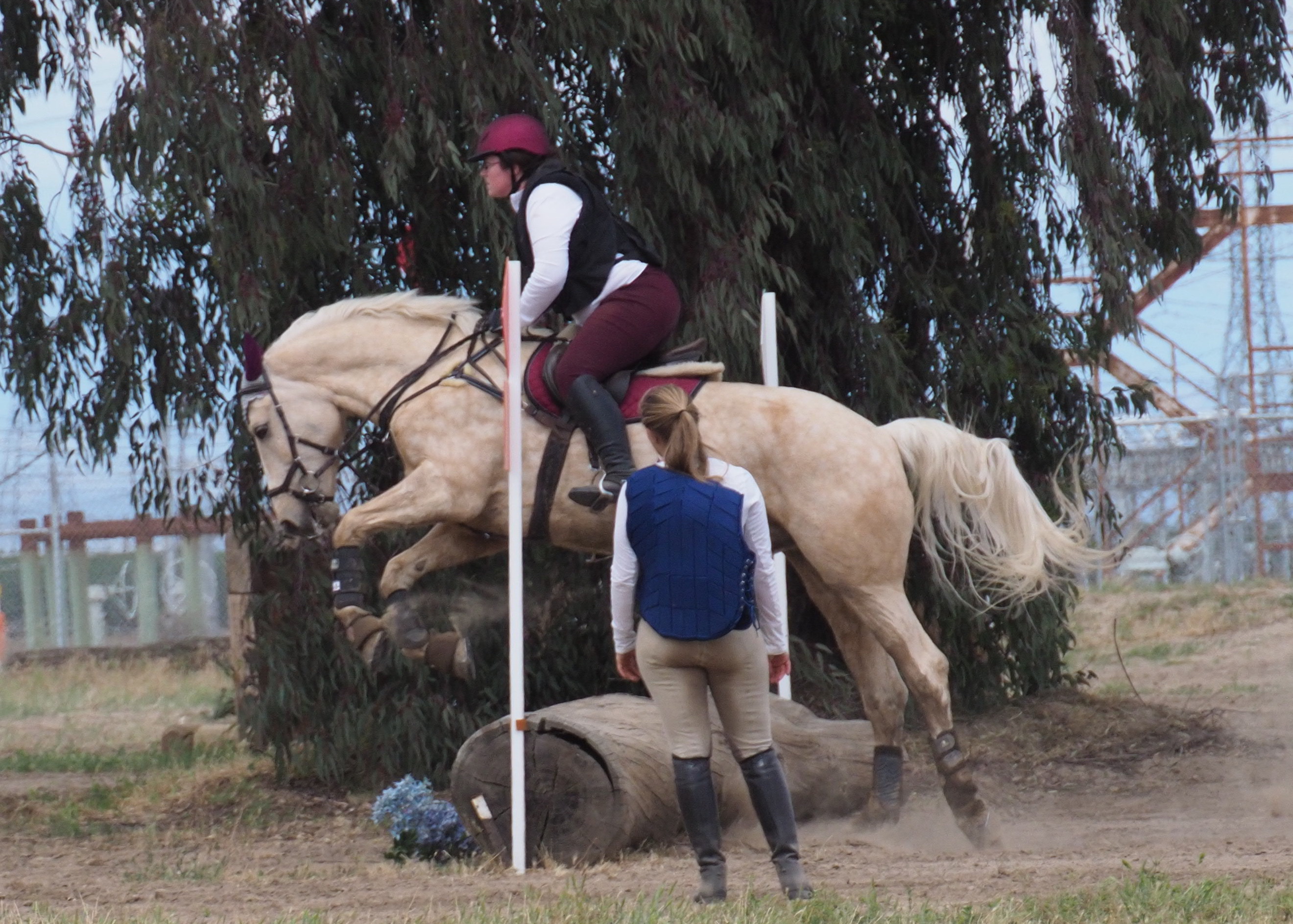 Once I had his brain on me, I attempted the very small BN jump and he did it on the first try. He even went over it without any dramatic overjumping. 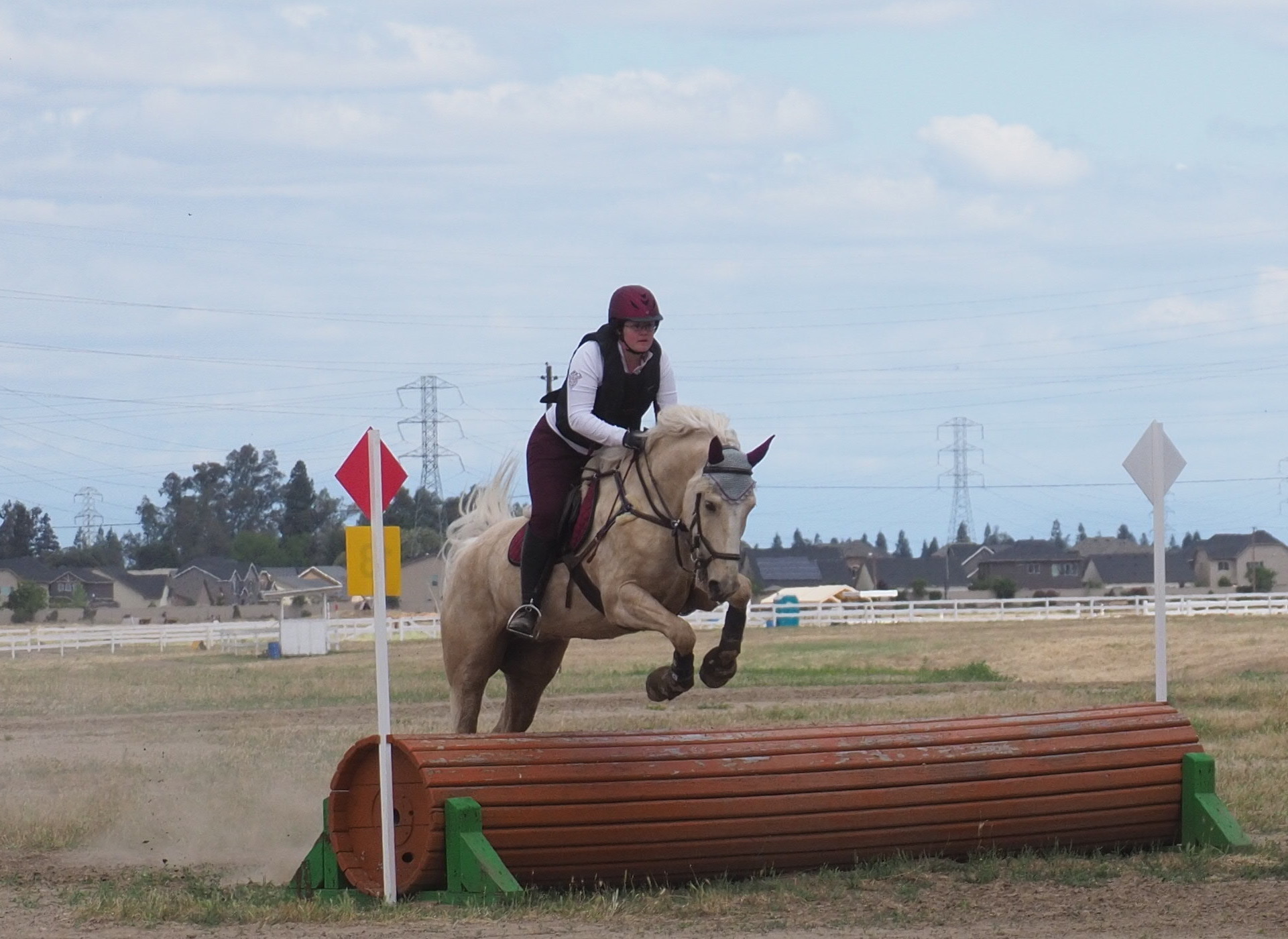 Then it was my husband’s turn. Kate had him pop Eugene over a little intro jump to get him back in the jumping mindset and then had them go straight for the BN ditch. 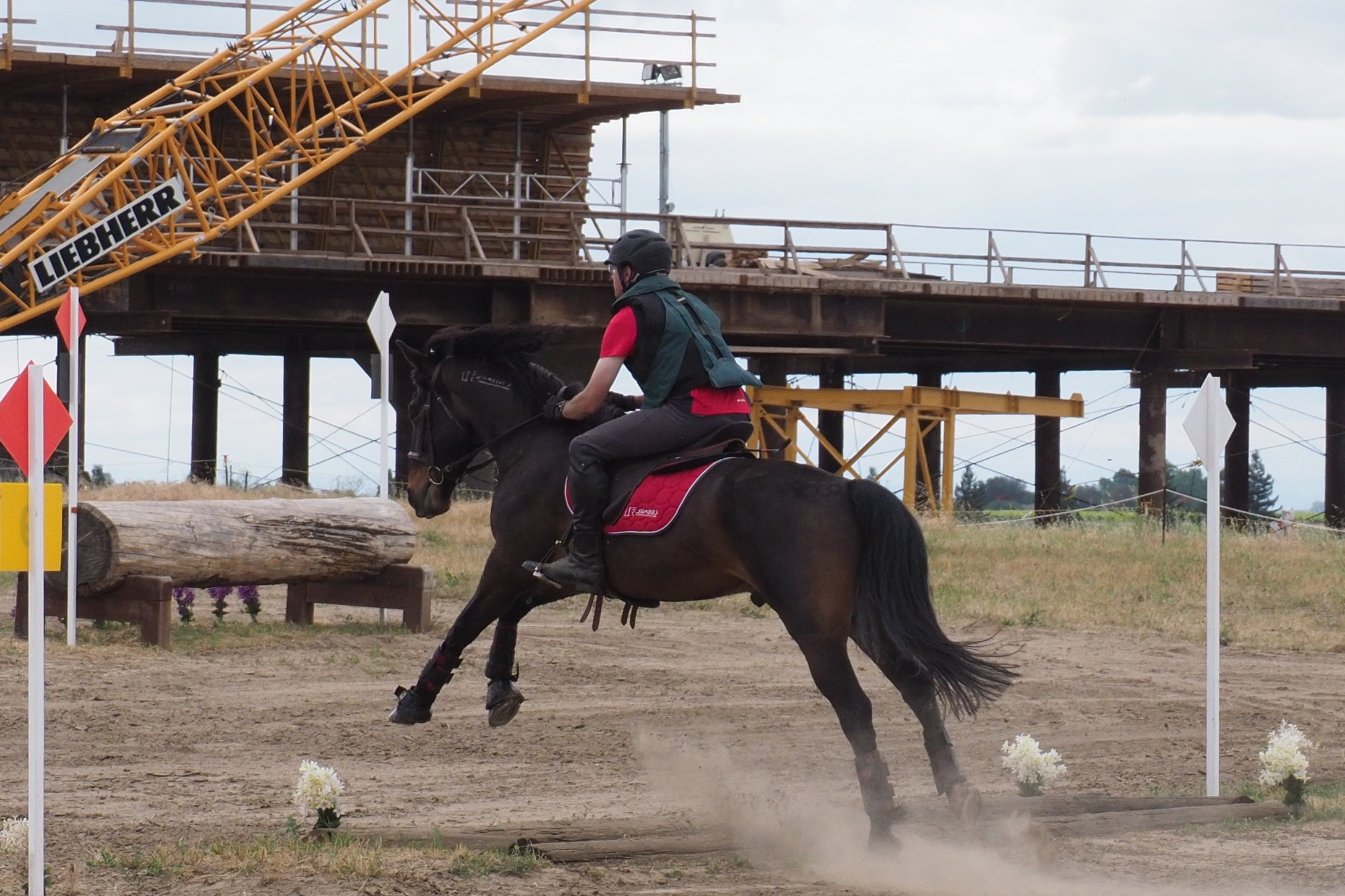 I think we were all surprised he went over it on the first try. Even Eugene seemed surprised as he kinda stuttered at the last second. They did the BN line in the other direction and then on to the novice ditch and jump. 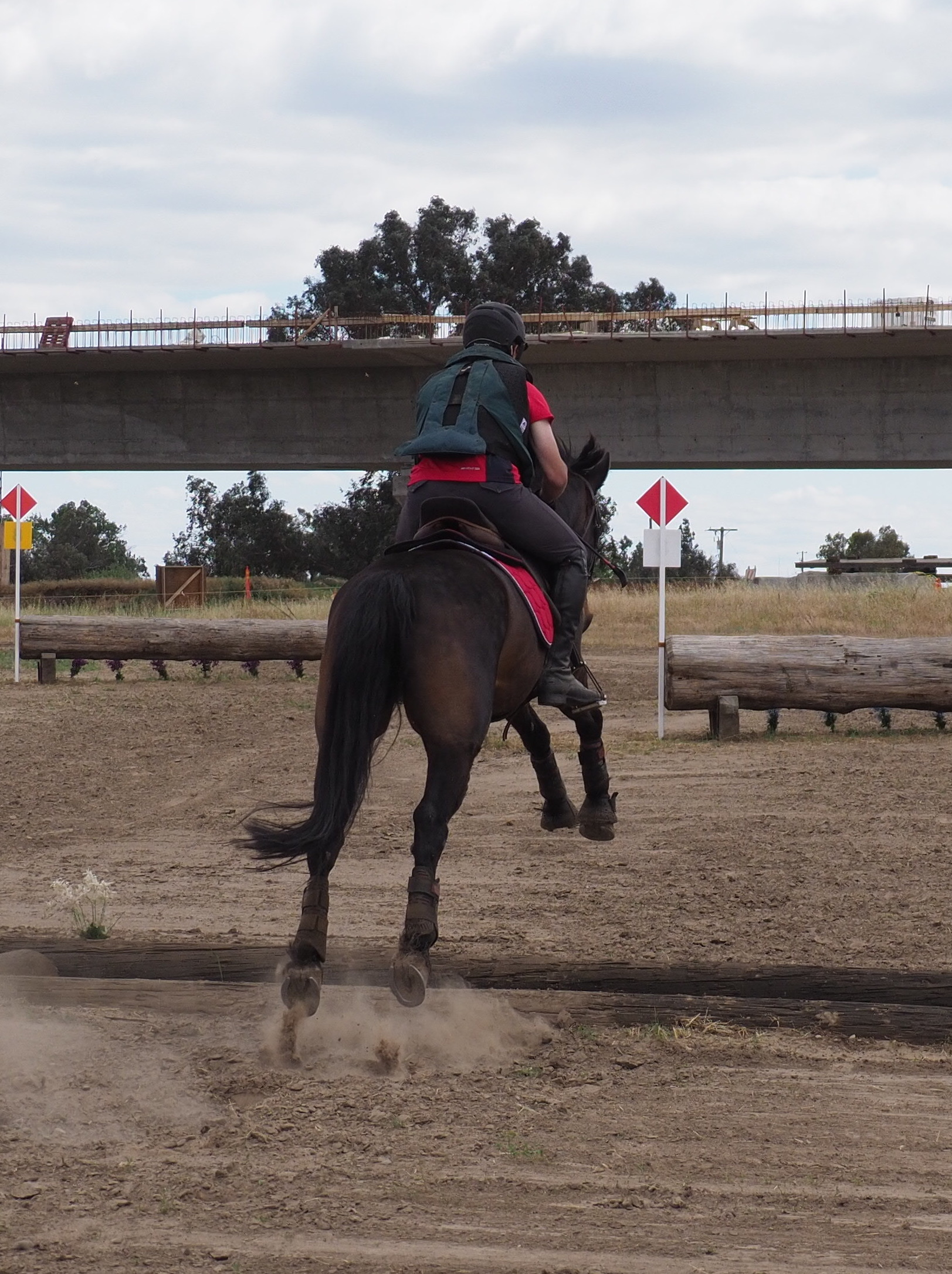 Ditches have been a big problem for Eugene. They’re really his only issue on XC. Getting him over these ditches, especially without any refusals, was pretty great.

Not content to call it at that, my husband wanted to try some more of the Novice questions. There was a Novice line over a jump I don’t know the name of through the water to a corner. I’ve never seen a corner at Novice. Kate hadn’t either and even she thought it was huge. Eugene, of course, had no problem with it. 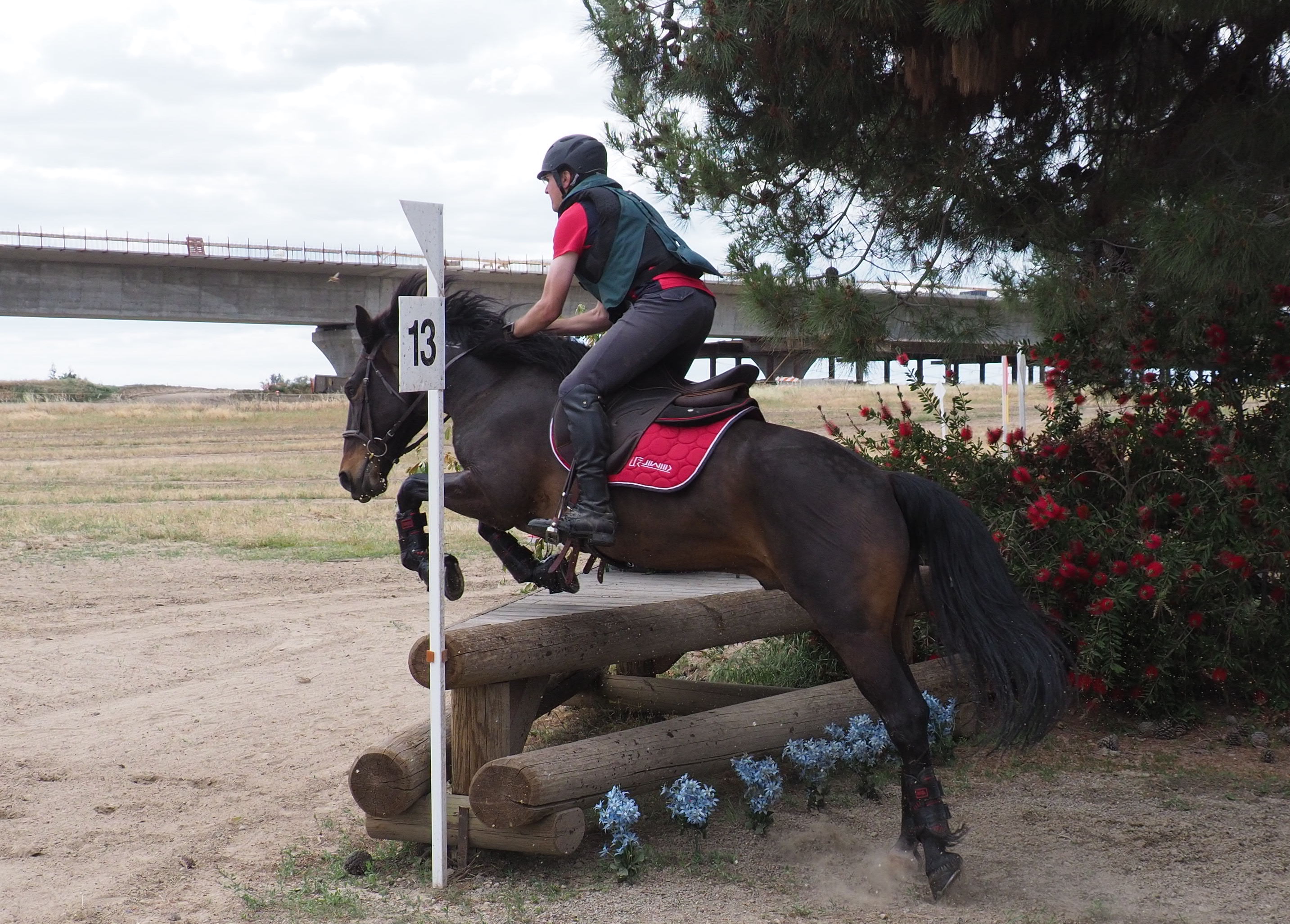 Seriously, this little Mustang is so great on XC. Kate even commented on him saving that jump. Half way through the water the striding wasn’t right and Eugene just moved up to fix it.

The next question they tackled was the Novice bank combination. They did the up bank to the immediate down bank and then a turn to the black and yellow coop. He slipped the reins on the down bank and was still gathering them up as they made the turn to the yellow.

There were about a million opportunities for Eugene to run out, but he just locks on to whatever my husband points him at and goes for it. 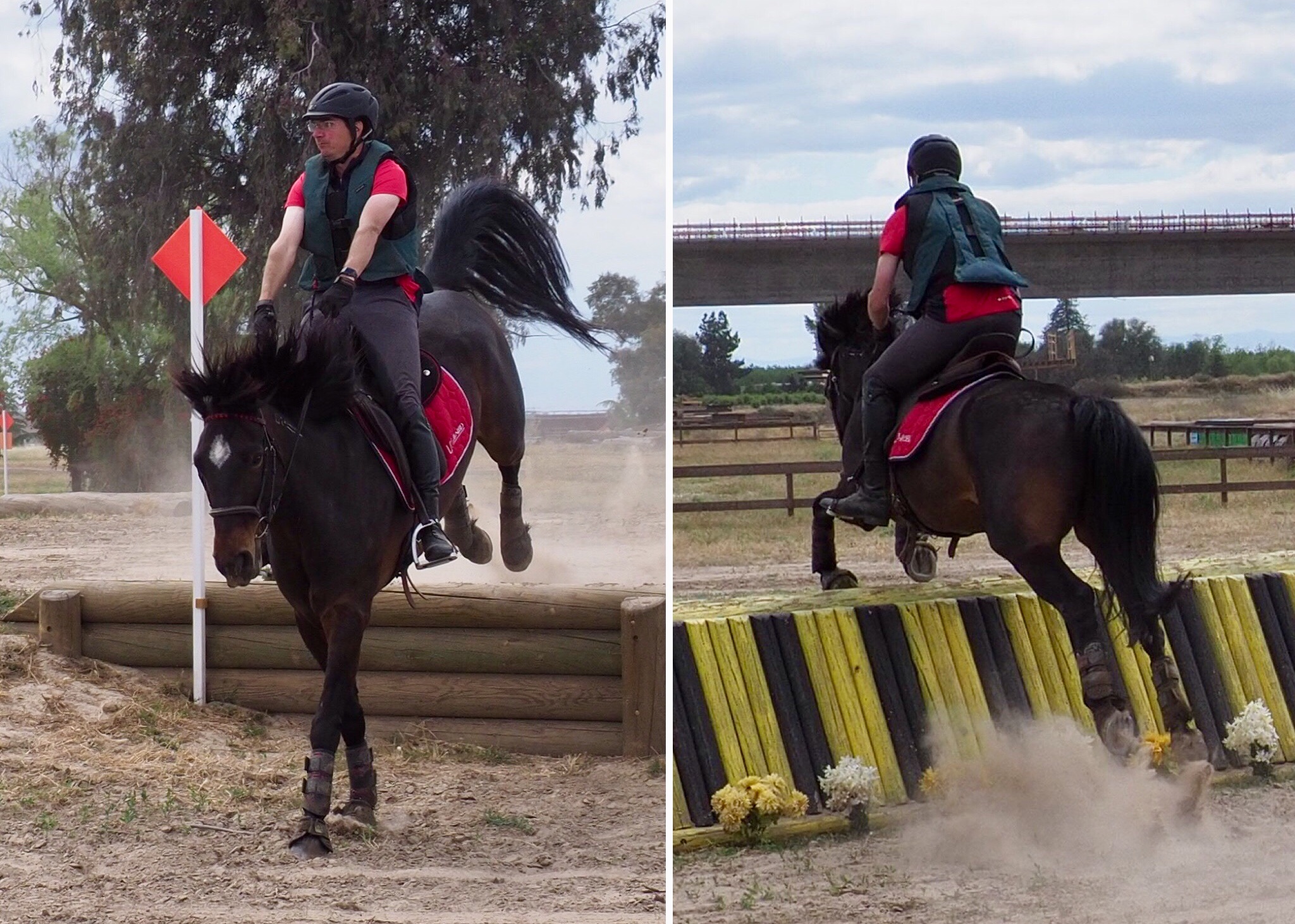 He finished that group of jumps and Kate’s exclamation was, “never sell that horse.” My husband laughed and said he wasn’t planning on it.

Eugene was done with that and Kate asked if I wanted to do anything else. My back was killing me soI was going to just be done, but my husband offered to take him over a few more jumps. Levi has been a complete doofus about down banks in the past and we were at the bank area so no better time. They started with the baby banks: 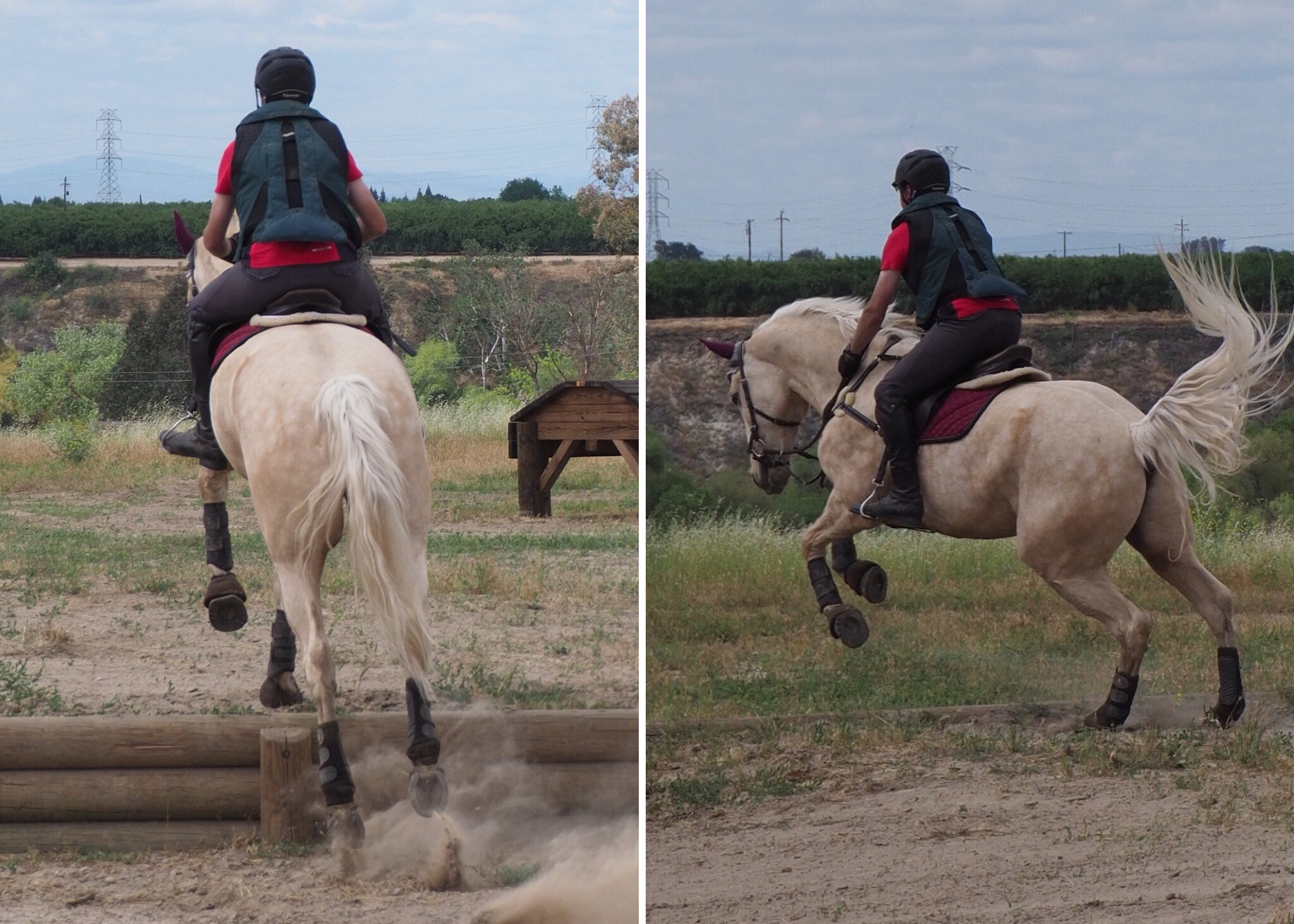 Even on the little banks, you can see the issue. Levi likes to tuck his knees and jump out instead of down. Once they had done the baby banks a few times, they did the novice combination. 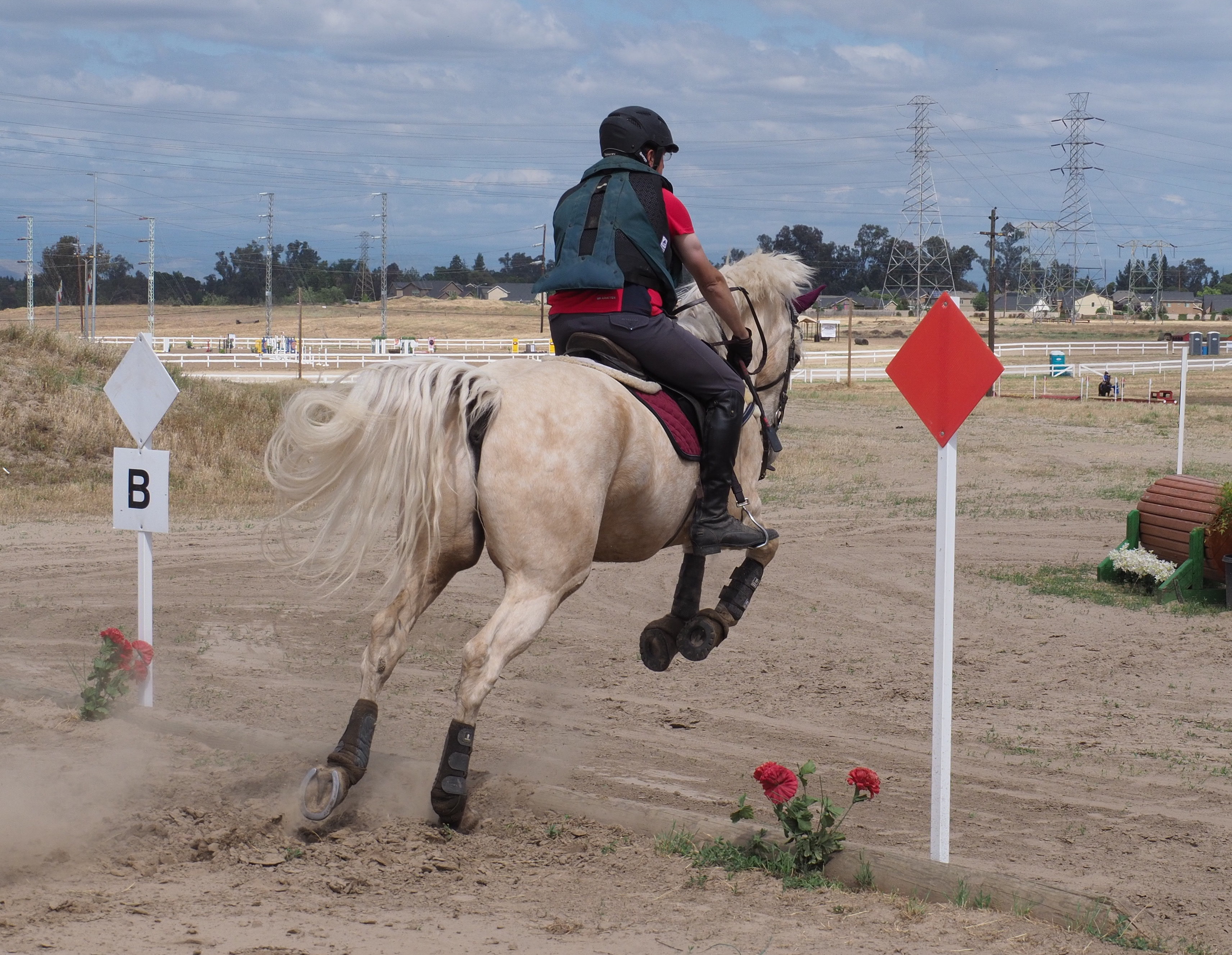 They somehow didn’t die doing that and Kate had them come back around and do the BN rocket jump to the orange jump, through the water, and over the coop. 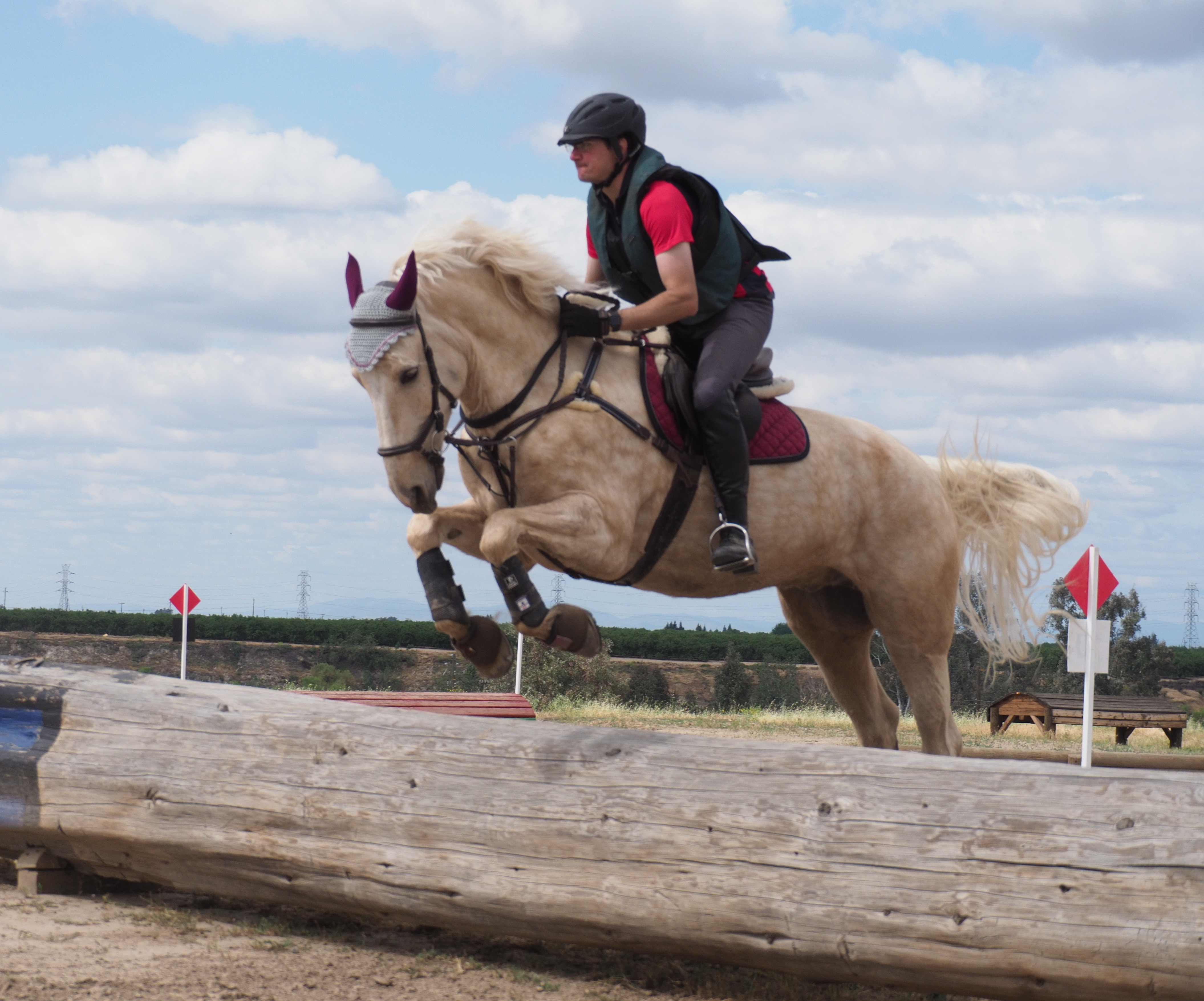 BN apparently wasn’t challenging enough so Kate had them do the Training coop by the water next. They did it backwards first and Levi was perfect: 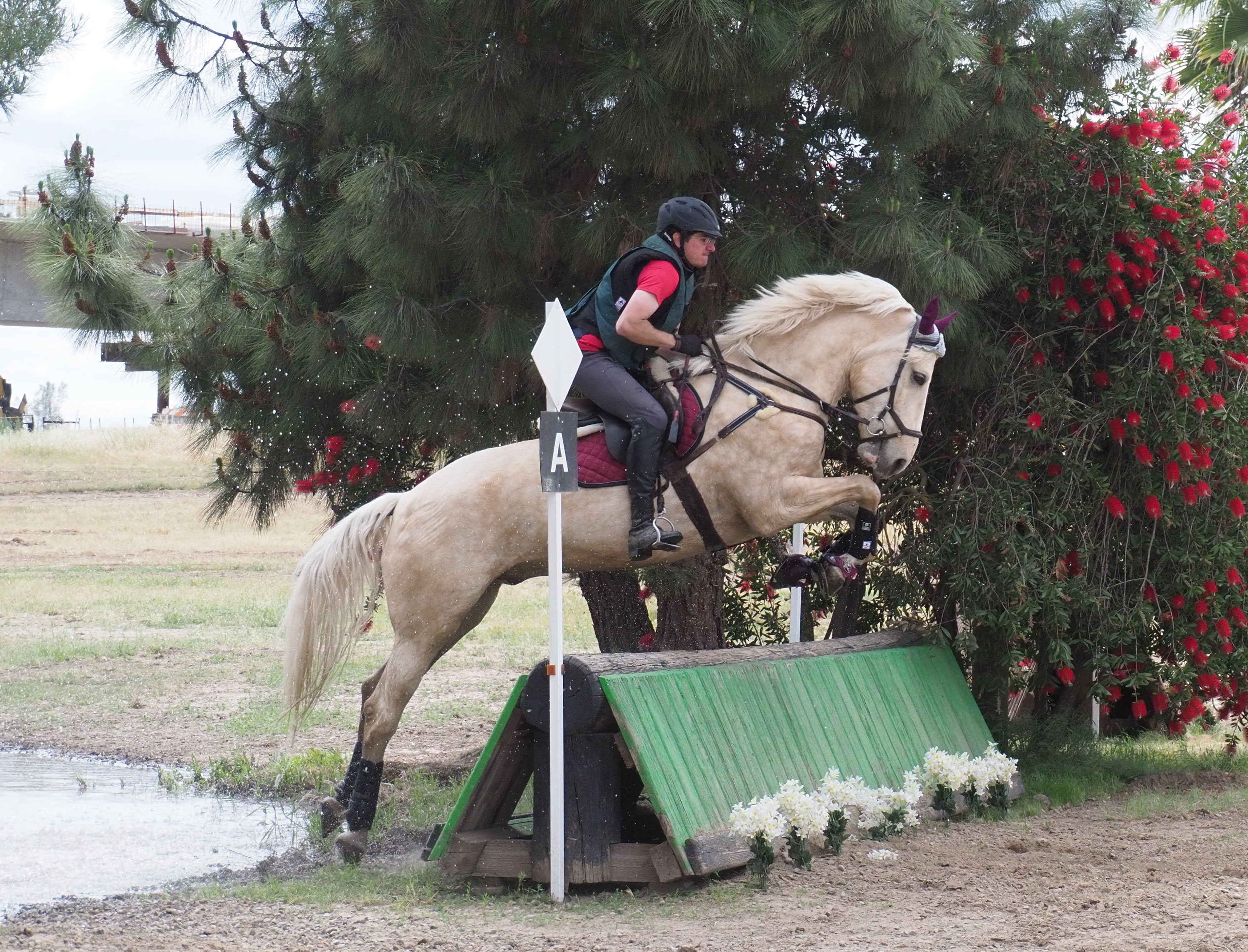 The jump is a bit small for Training. The challenge is the water landing (and the subsequent corner at B). When Kate had them turn around and do the jump in the other direction, Levi saw the water and was like, “hells no”. 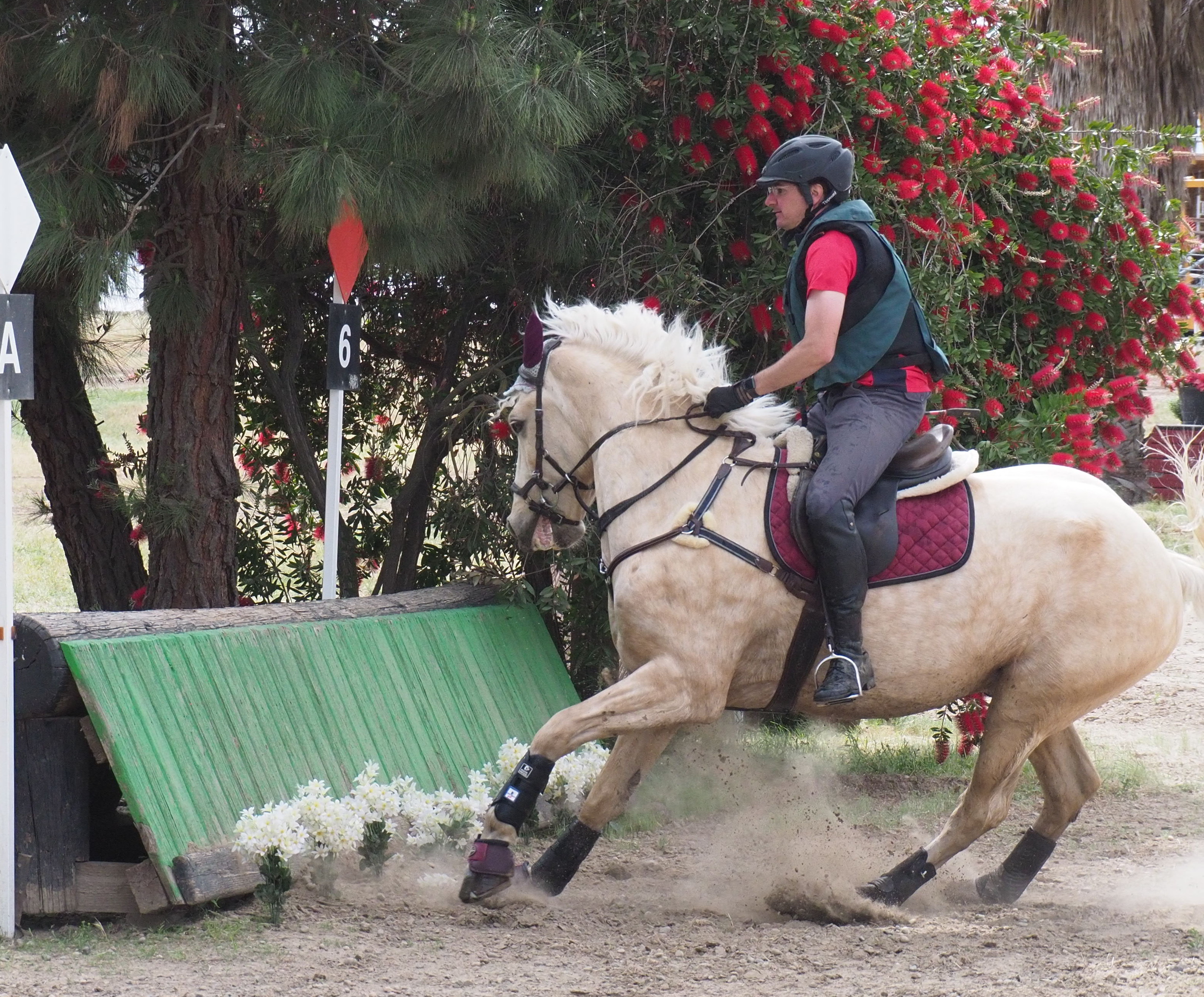 But he circled around, kept the leg on and bam: 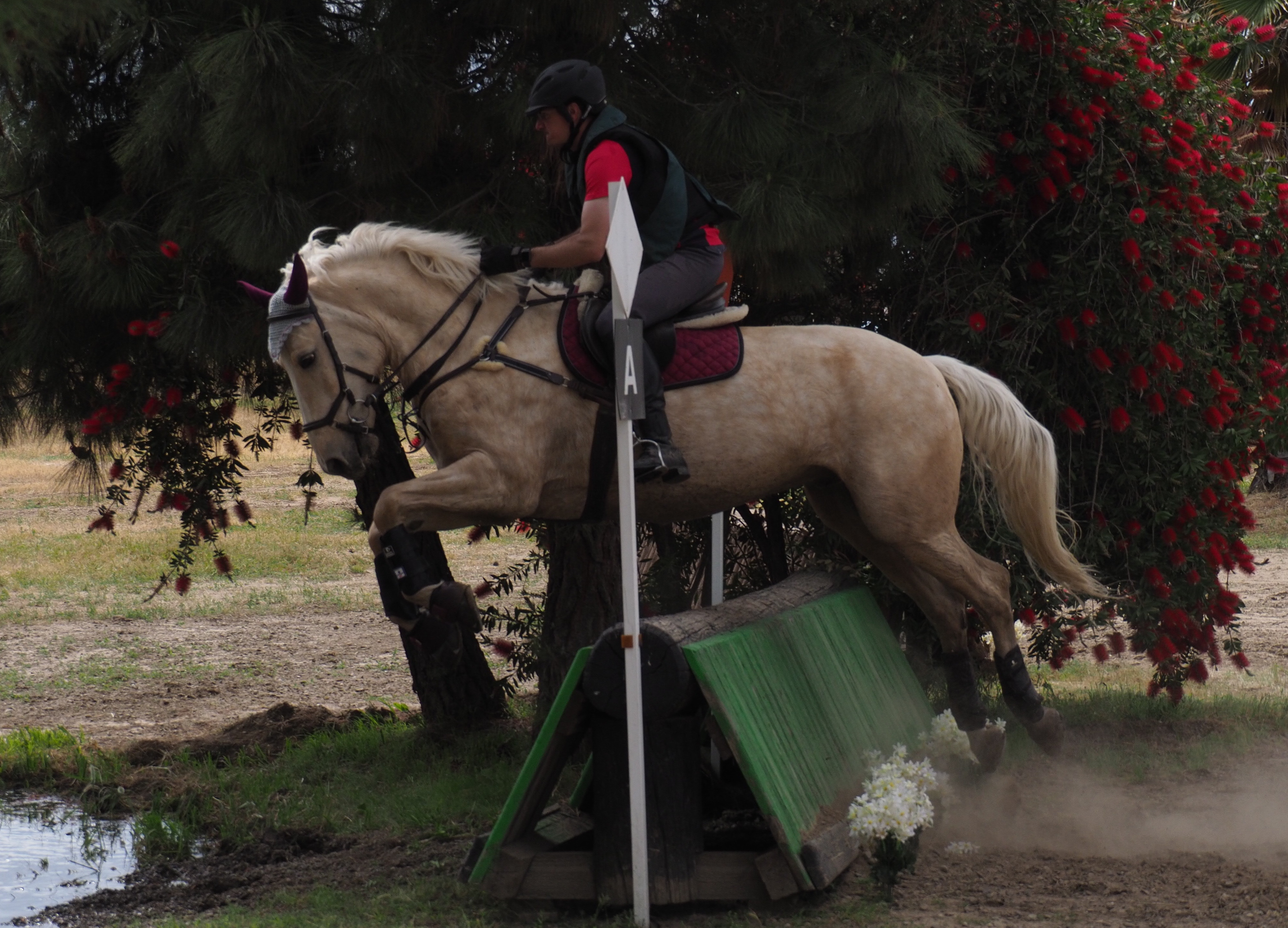 And thus we have a horse that’ll do Training with my husband, but balks at Intro jumps with me. It’s not even like he needs a pro ride, he just needs a more confident rider.