Last weekend we were supposed to go to a schooling show at the Horse Park, but it was cancelled due to rain. To make up for it, Kate decided to host a fun show at her barn for her students and invited us to join. The judging style was reality TV show, the prizes were socks and thumbs up trophies, and there was a sound system blasting music. My kind of show!

The first class was One Flat Class To Rule Them All. We crowded like 10 horses into the arena and turned the music on. A few horses thought the speakers might be death. One had to leave the arena for some brain re-insertion. Then we did some walk and trot and then came into the middle to get spoons and tennis balls. This was much harder than balancing an egg as tennis balls don’t fit in small plastic spoons. 2 people managed to lose their balls just standing waiting for everyone to get set up. Another 4 lost theirs moving from halt to walk. I lost mine going from walk to trot and my husband just carried on trotting around with his tennis ball like no big deal. He won last place for that.

Best ribbon ever! After tennis ball dropping, we were asked to do a free-style. I did some pseudo spins with Levi (he’s getting better at them) some of the kids tried to pair up and do weird contortions on their saddles. It was basically chaos. Finally, it was time for placings. I ended up winning some red socks for my freestyle. Woo hoo.

The jumping classes started with the cross rails division and proceeded to take forever. The boys got bored – especially after we dragged them away from the yummy weeds they were devouring – and resorted to mutual grooming. 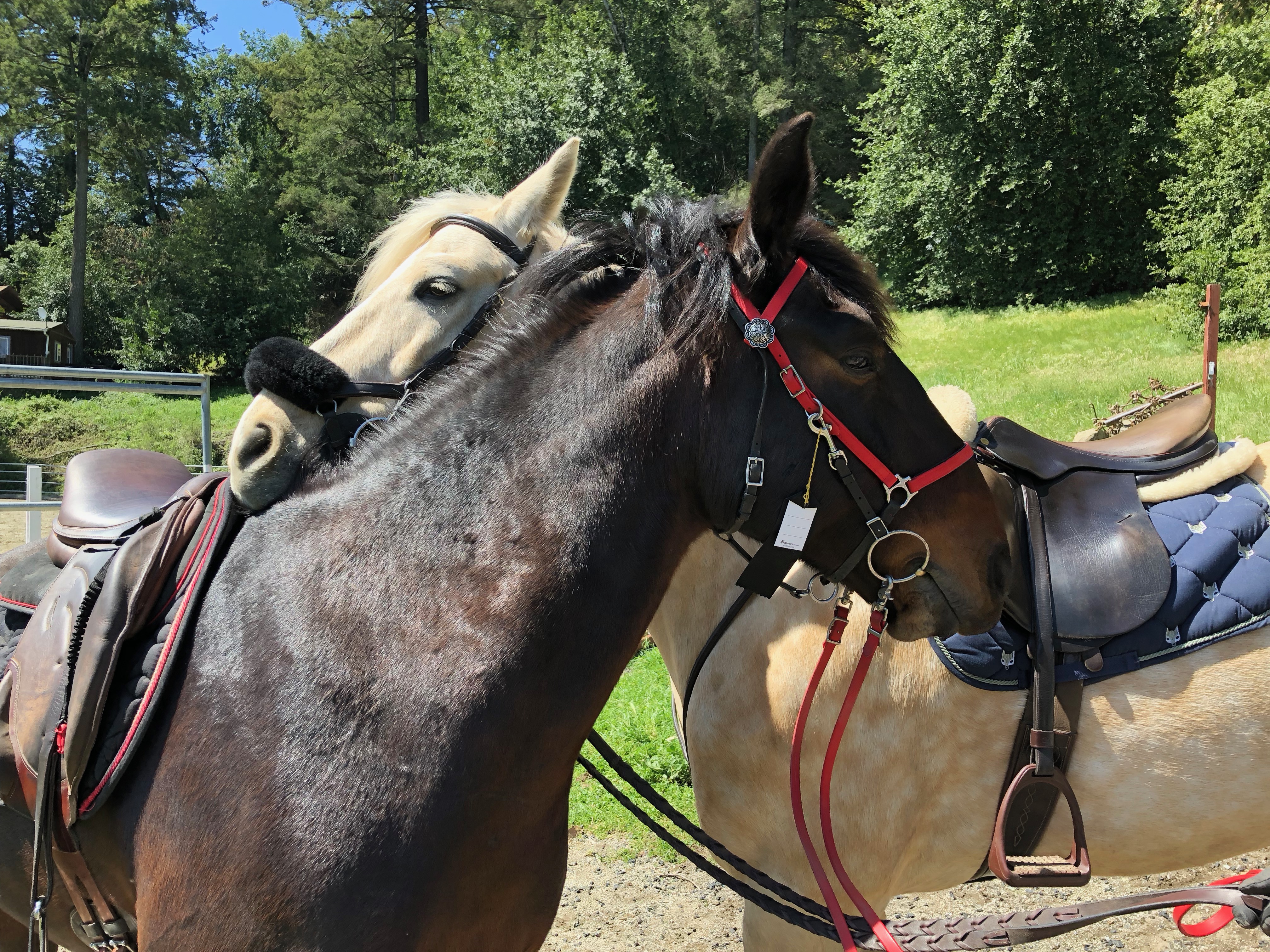 At least they did until Eugene inevitably turned into a jerk. For all that Levi is so much bigger than Eugene, Eugene is definitely the boss. They get along great, but Eugene can be a pest.

I wasn’t sure how high I wanted to jump Levi since he still had a boot on so I did the 18″-2’ish division. Levi was being a bit weird with the one booted foot, but he was generally being good. I had my husband join me for the team jumping competition. That was a lot of fun and I wish they offered fun classes like that at shows. My husband took ZERO pictures of me riding all day so I have nothing to share.

I did get this screenshot of the reality style judging complete with celebrity horse blogger Keith W. Matapouri from http://postthetrot.blogspot.com as judge. 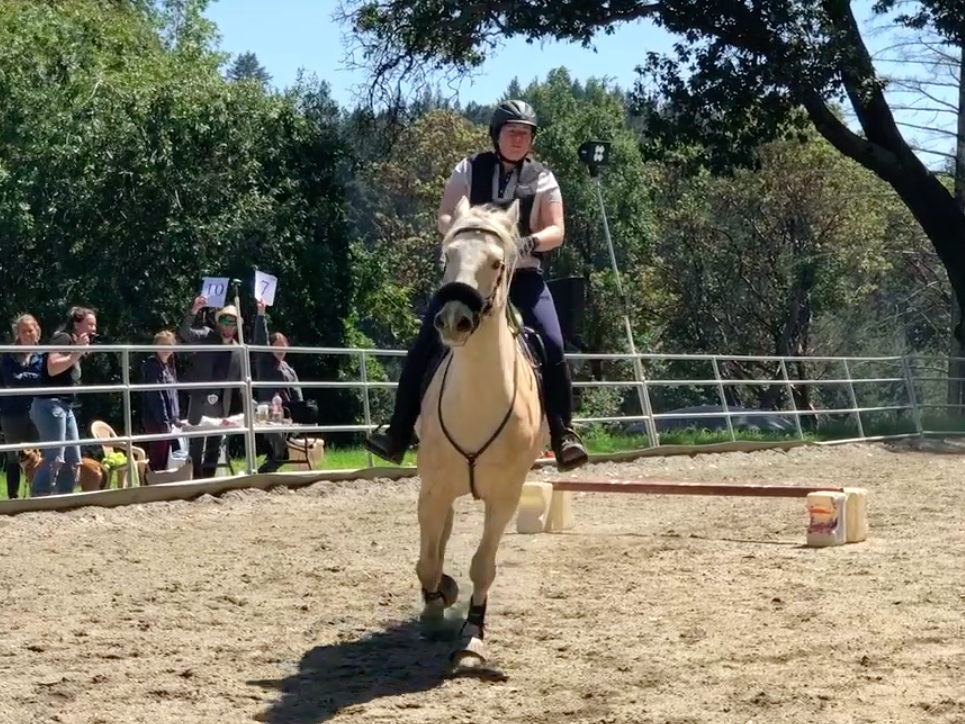 After a break for lunch, we returned to the arena with just my husband, myself, and one of Kate’s students who competes at training level. The rest of the kids were done for the day. We raised the jumps up to 2’3″-2’6″ and Kate set up some new courses. She also added the pool noodle poles. At first, I just rode around the pool noodle jumps because I wasn’t interested in having what I assumed would be a huge fight. Kate lowered the pool noodles for me to try them and Levi was really good about it although he did make sure not to touch it. Just in case. 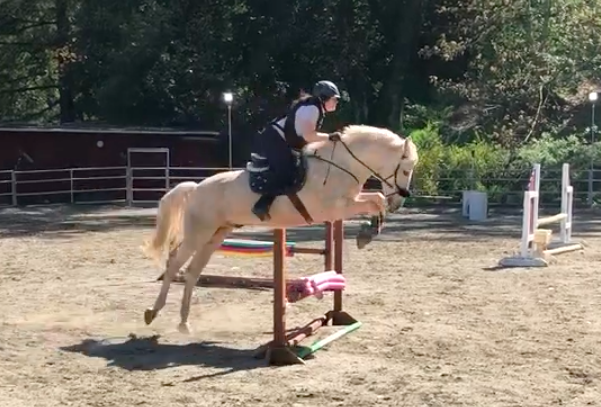 The final course was super hard to memorize. It was long and had you looping around to jumps in an order that just didn’t make a lot of sense to my mind. We all stared at it for a long time trying to memorize it and no one wanted to go first. I volunteered to go and made it through 1-10 without getting lost, but couldn’t remember 11. 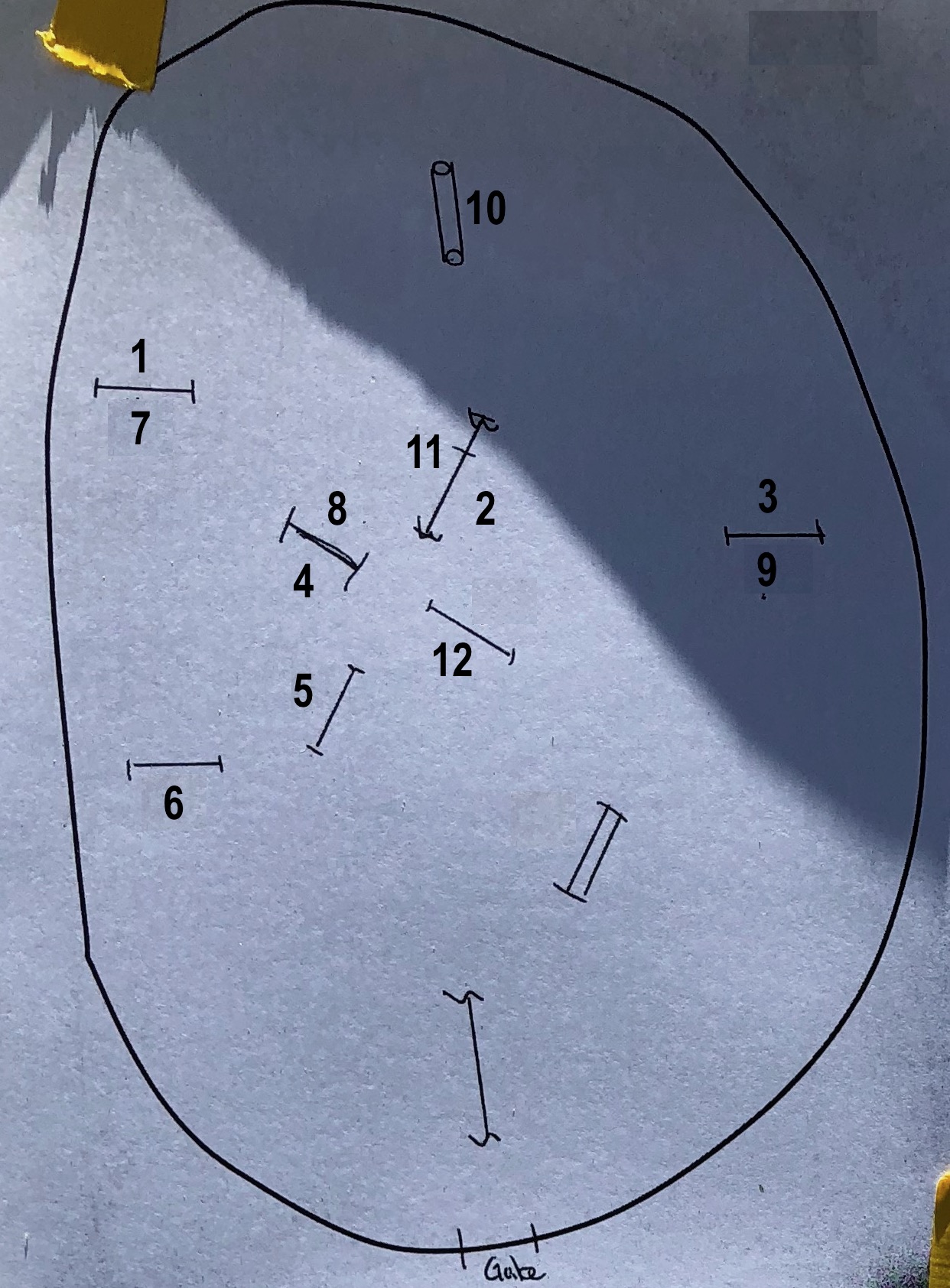 Messing up the course was a shame as Levi was going really well. He jumped the pool noodles and the barrels at 10 without an issue. Then he decided jump #12 needed intense staring at instead of jumping and took the whole thing out. 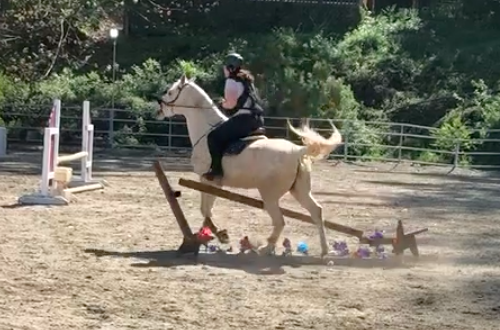 I didn’t want to push him with his missing shoe so we called it quits and raised the jumps for the other two. All the jumps got pushed up to 2’6″-2’9″. I cautioned my husband before he started that he needed to be careful and not rush Eugene at the jumps. Especially as he’d already done a few rounds, I was worried Eugene might be tired and knock some of the bigger jumps. 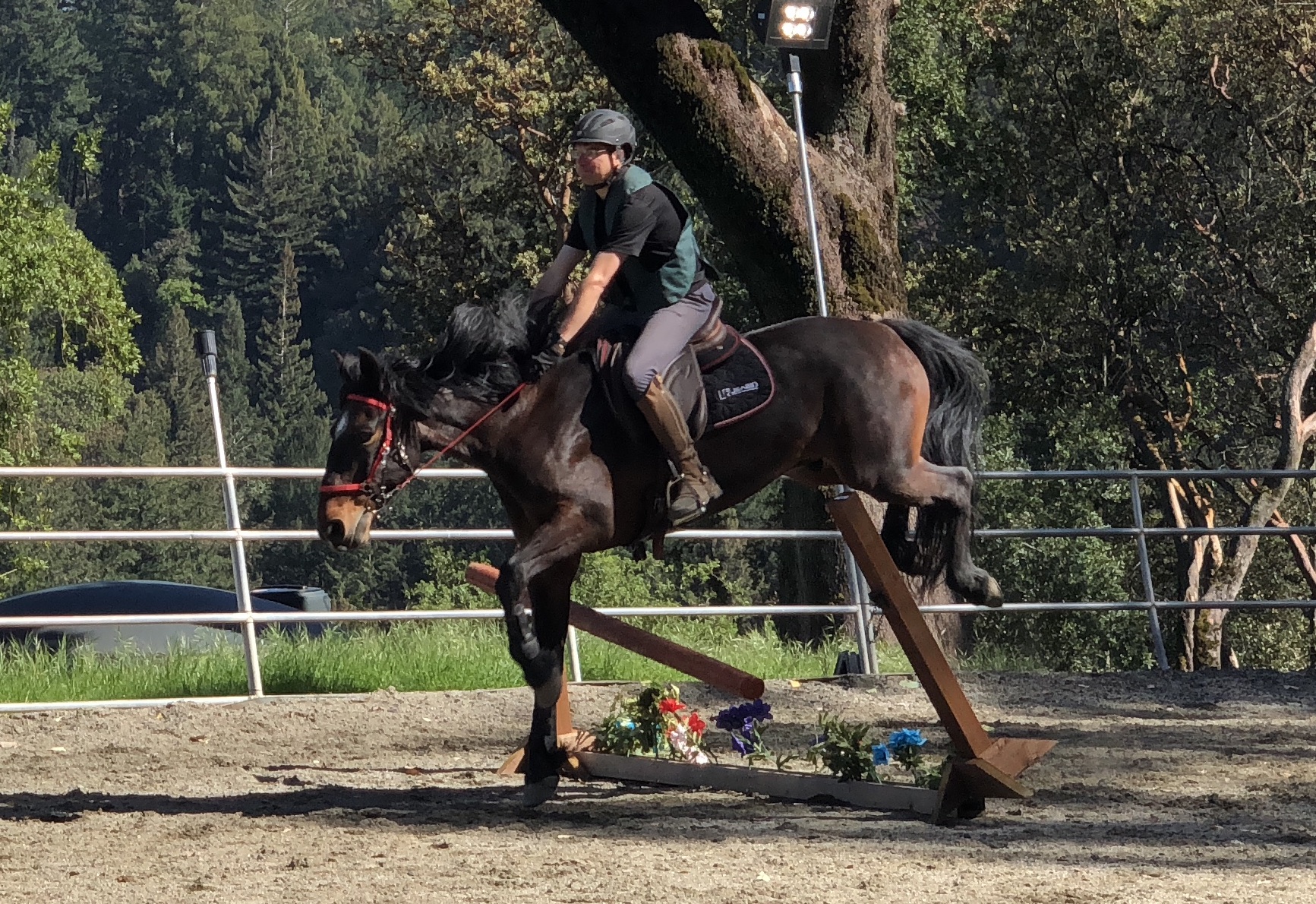 Well, apparently Eugene missed the memo that the jumps had been raised and took out the first one. But after that he was on a mission. It’s normally really difficult to get Eugene to take any sort of long spot, but he was cruising around and launching over the jumps. My husband even got left behind at the one jump, his takeoff  was so unexpected. 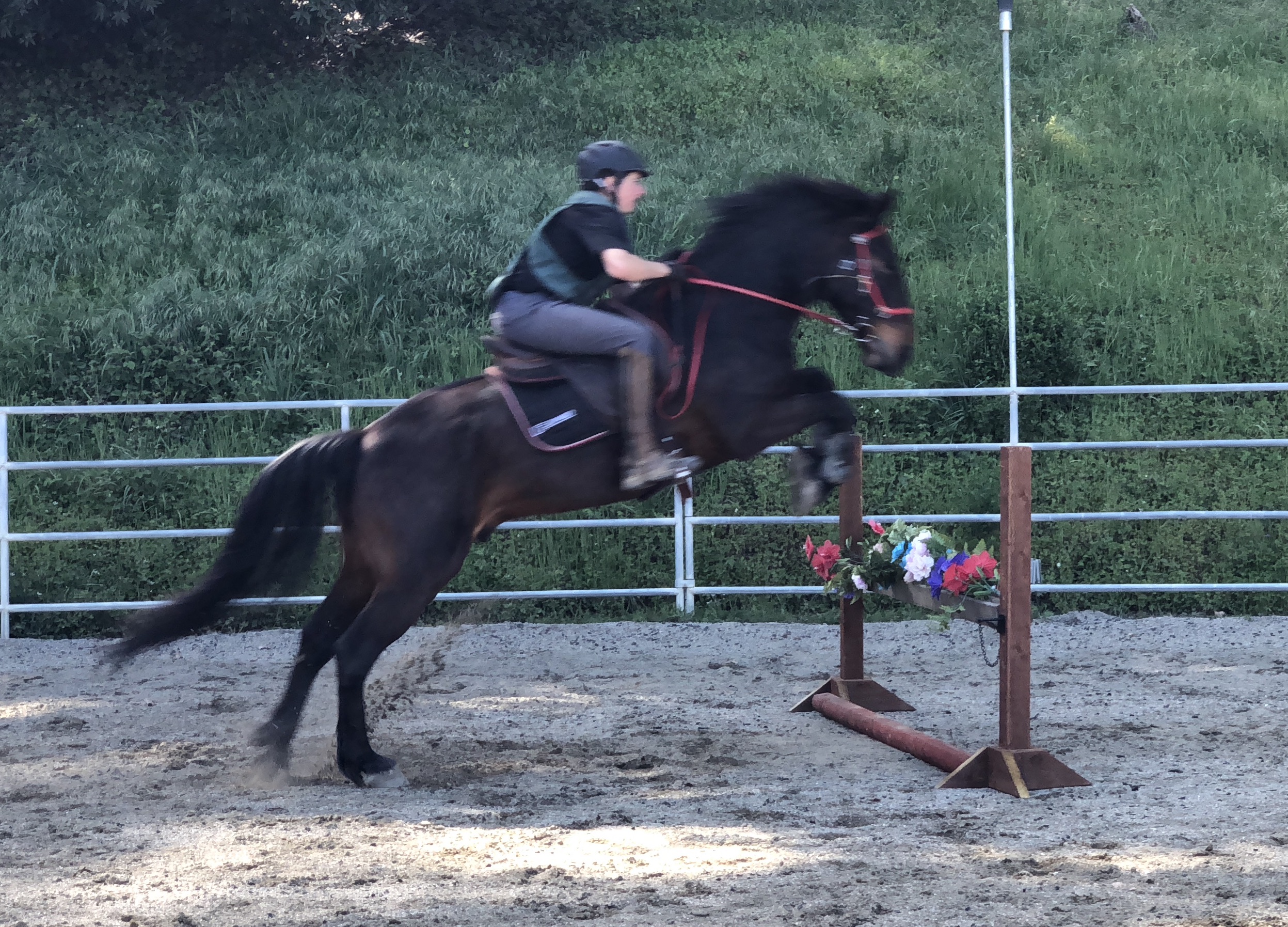 The pool noodle jump was awesome. The first time they did it, Kate’s student’s horse spooked big time at the noodle. Eugene just popped over it like it was nothing. The student was amazed and even commented on how bombproof Eugene is. Kate, my husband, and I all started laughing. Put me in the middle of the arena sitting on a mounting block and he’ll go flying sideways. Jump judges? Terrifying. Random log? Might be out to kill him. But weird jumps? Doesn’t care. If my husband says he should jump it, Eugene says okay. 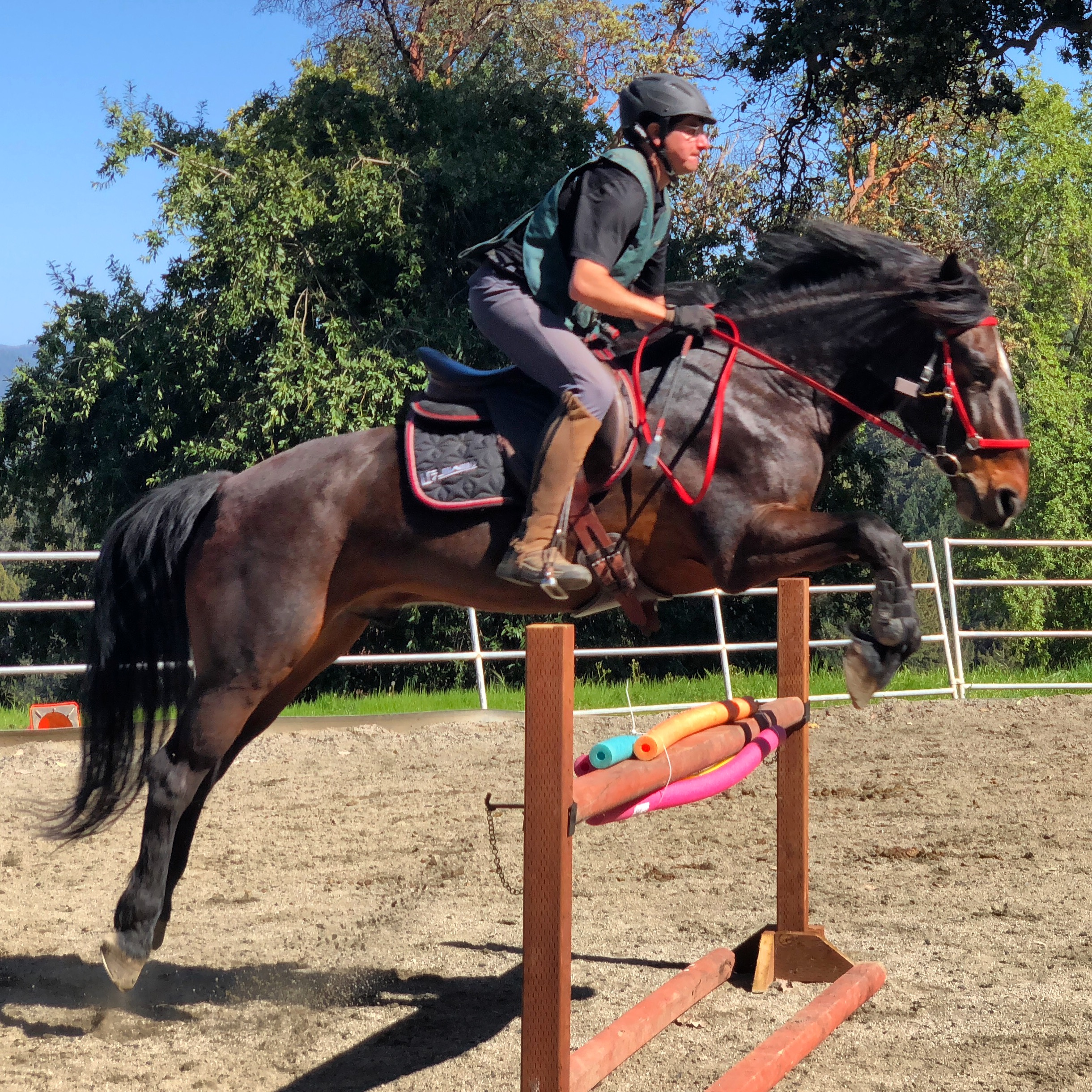 After that first jump, they didn’t touch another one. And it was a really smooth round with a lot of long spots. Which might seem like a weird thing to be excited about, but it’s a real improvement for Eugene. 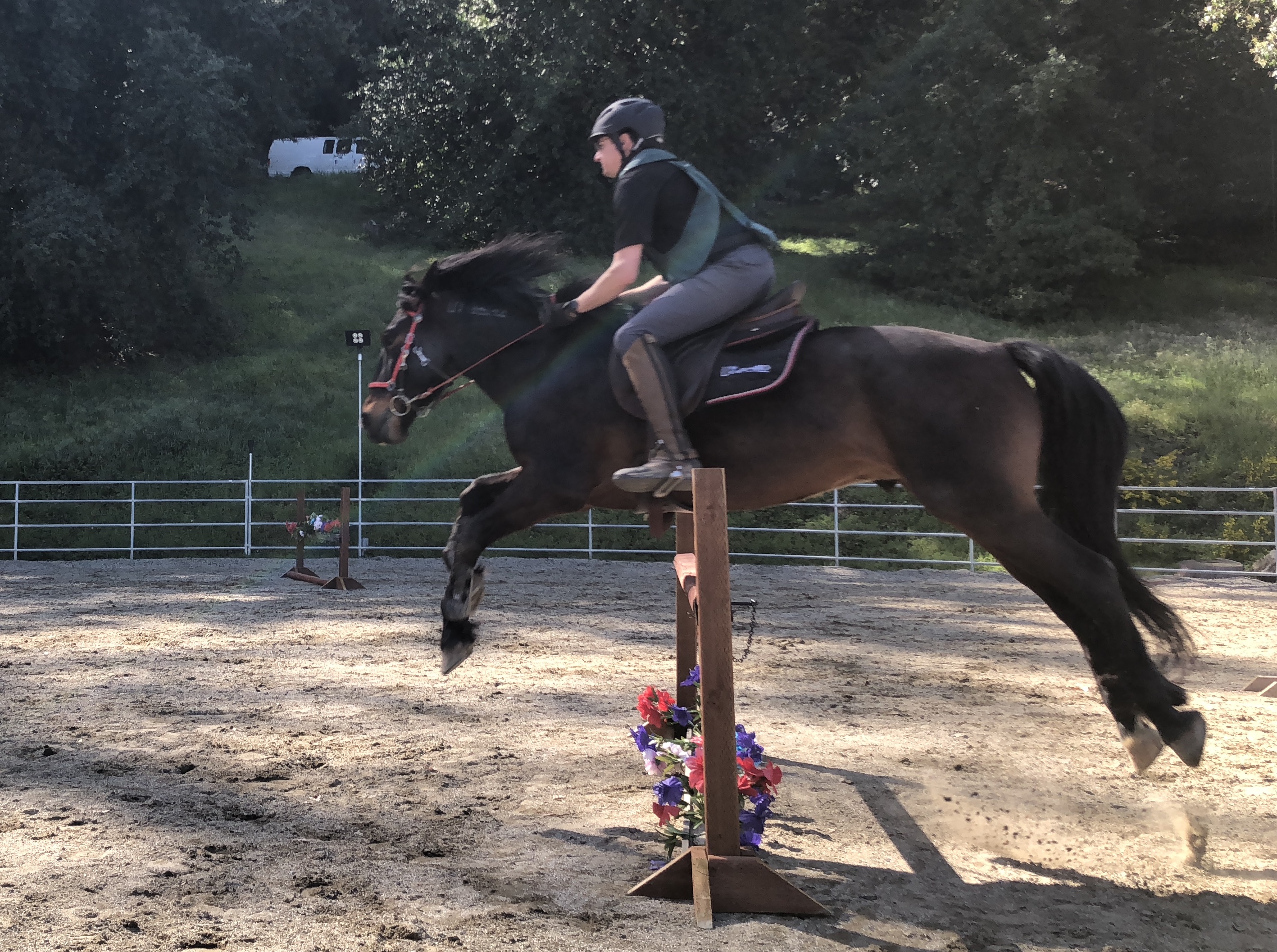 Since Eugene was so good and had already done a few courses at the lower levels, we decided to end on that note. He got lots of pats and praise and we took them home for dinner. All in all, it was a really fun day. The courses were fun, the atmosphere was super chill, and the ribbons were an excellent addition. I had a lot of fun bouncing around jumps to fun songs without any real pressure.