After Webb, we had a few days of rest before packing up again and heading to HCE Camp. HCE Camp was held at Eventful Acres and was a combination of cross country and working equitation. I was really excited to try out working equitation and I was hoping to do some practice on cross country with Levi to settle some of our issues.

On Wednesday, I drove the ponies up while my husband worked. I got us parked and set up and then attended a introductory meeting put on by the head trainer. She went over the rules and then we all went to get ready for DBW (ditches, banks, and water).

I have no pictures from any part of this as my husband was still at work. Levi was being his usual awful self. I don’t know why I had forgotten that he is incapable of keeping his brain inside his head during group XC schooling, but he quickly reminded me of that when we turned towards the first (ridiculously tiny) bank and he squealed and tried to take off. I’ve been arranging private XC schoolings with Kate where we don’t let him out on the course when other horses are anywhere near him. The existence of other horses breaks his brain and when those horses are doing fun things and he has to -god forbid – stand still for 3 seconds, he just loses it. Why I forgot about this being an issue for camp, I do not know.

The rest of the lesson was spent with me getting yelled at for not letting him go forward but I wasn’t interested in letting him go forward when he was squealing and hopping through the air like a deranged dolphin. We could not even get over a fake ditch that was literally just two poles on the ground. He would try to hurl himself over it and bolt on landing. It was pretty miserable.

He was actually good about the water. Once he gets in the water, he’s usually fine and since we were just walking and trotting through the water he was happy enough. Plus Eventful Acres has irrigated fields so there was fresh, green grass to be eaten.

Once that was finally over, I relaxed for a while and then had dinner while waiting for my husband to arrive. Kate was at camp as a co-instructor and we I took Levi and Eugene for an evening walk while she watched her kids ride around. My husband had to leave after work and then drive an hour out of his way to pick up my saddle – in bay area rush hours traffic – and didn’t get in until pretty late.

Every day we had the option of doing XC or Working Equitation and we were supposed to sign up the day before. I signed my husband up for XC and myself up for WE for day two.

I’ve been wanting to try WE for quite a while. It’s a sport I think Levi would do really well in and it looks like a lot of fun. Sadly, there’s very little WE in our area. It’s apparently much more popular in southern CA. I’ve looked around for clinics and the closest one I found this year was at Twin, which is like 3.5 hours away. I was excited to do try out some WE at camp.

Because Eventful is an eventing location, they didn’t have WE obstacles. The trainer used trees marked with some ribbon to take the place of barrels and slalom poles. She also brought her own garrocha poles, a ring set up, rope for a gate, and a bell. It was so intensely hot (highs above 100 every day), I was happy to be in the shade riding around trees instead of barrels in an arena.

We started out with some easy obstacles like the figure eight between two drums (in this case trees) first at the walk then the trot. Then three drums (again trees) and the bank which was conveniently located right there. 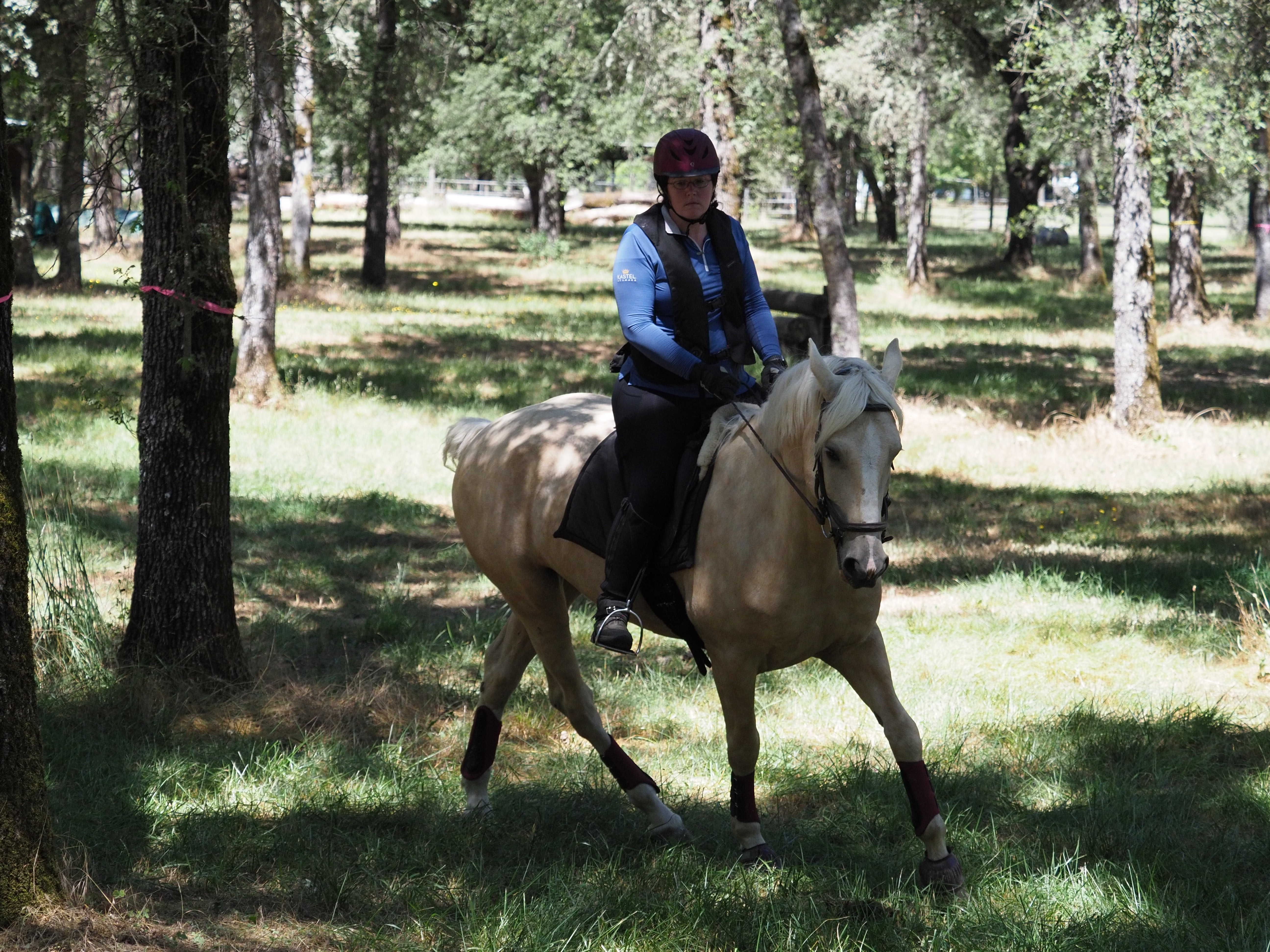 Levi was being really good. Even though we were in a group with other horses doing things, he didn’t have the same expectations/anticipations as with cross country schooling and was willing to stand still and chill out when it wasn’t his turn and go to work without any antics.

Then we got to do the fun stuff: garrocha pole and ring. The trainer had me show Levi the pole in advance, but in typical fashion, he didn’t care at all. He’s not generally a spooky horse and he really doesn’t care about you carrying things on him. Poles, flags, tarps, whatever. 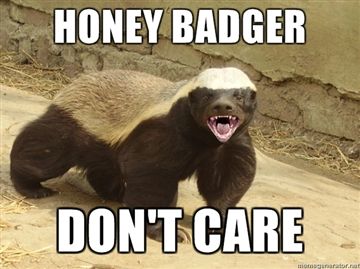 Maybe this should be his show name?

For this exercise, there was a blue barrel with the garrocha (bamboo) pole in. You grab the pole, toss it upwards in your hand, then tilt it forwards to be parallel with the ground, spear the ring, raise the pole back to vertical, and deposit it in the 2nd barrel. We started at the walk: 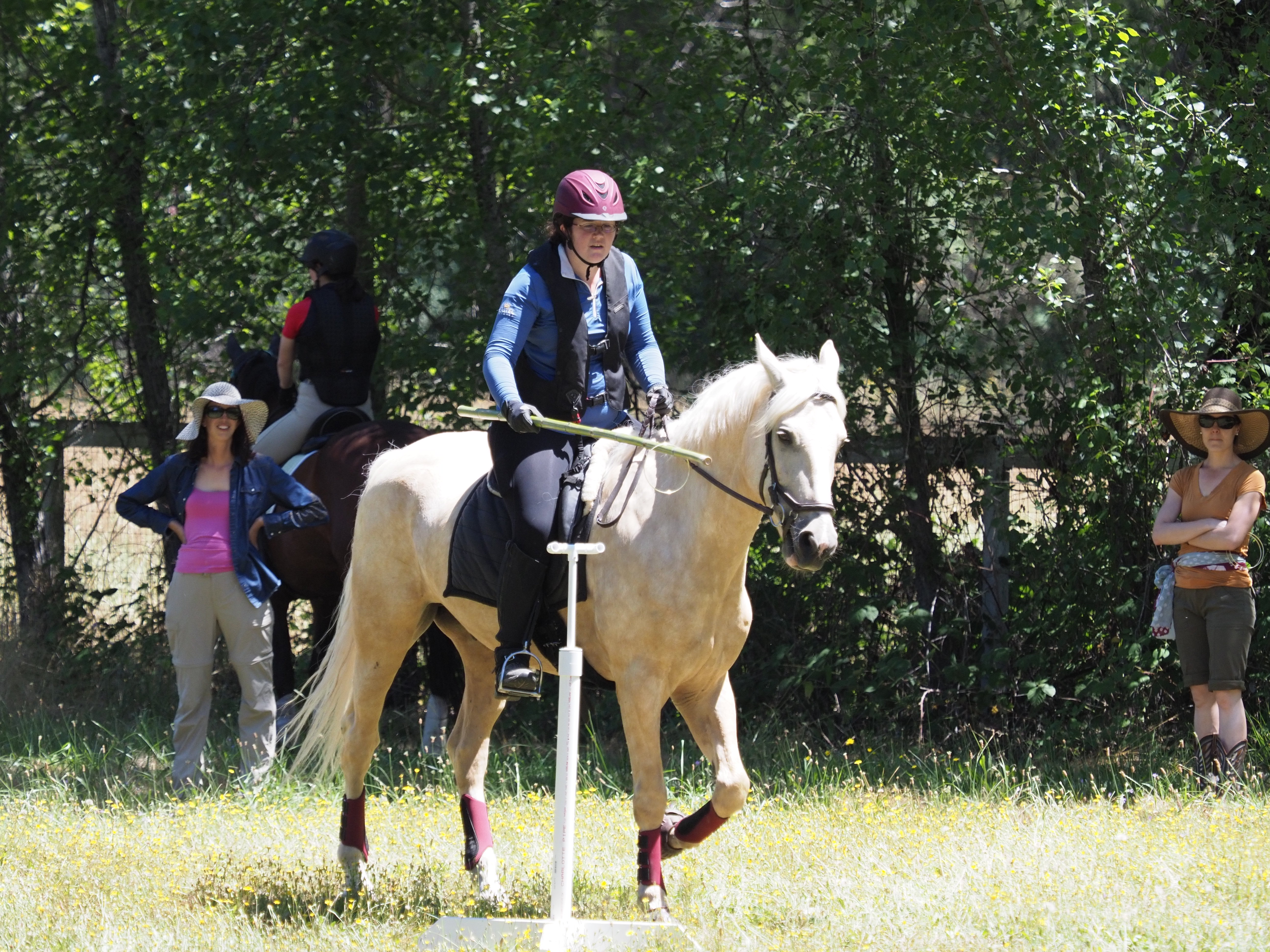 Levi was good enough we tried trotting the next time. Levi really has an advantage in WE since he already neck reins. I could steer and direct him easily with just one hand. 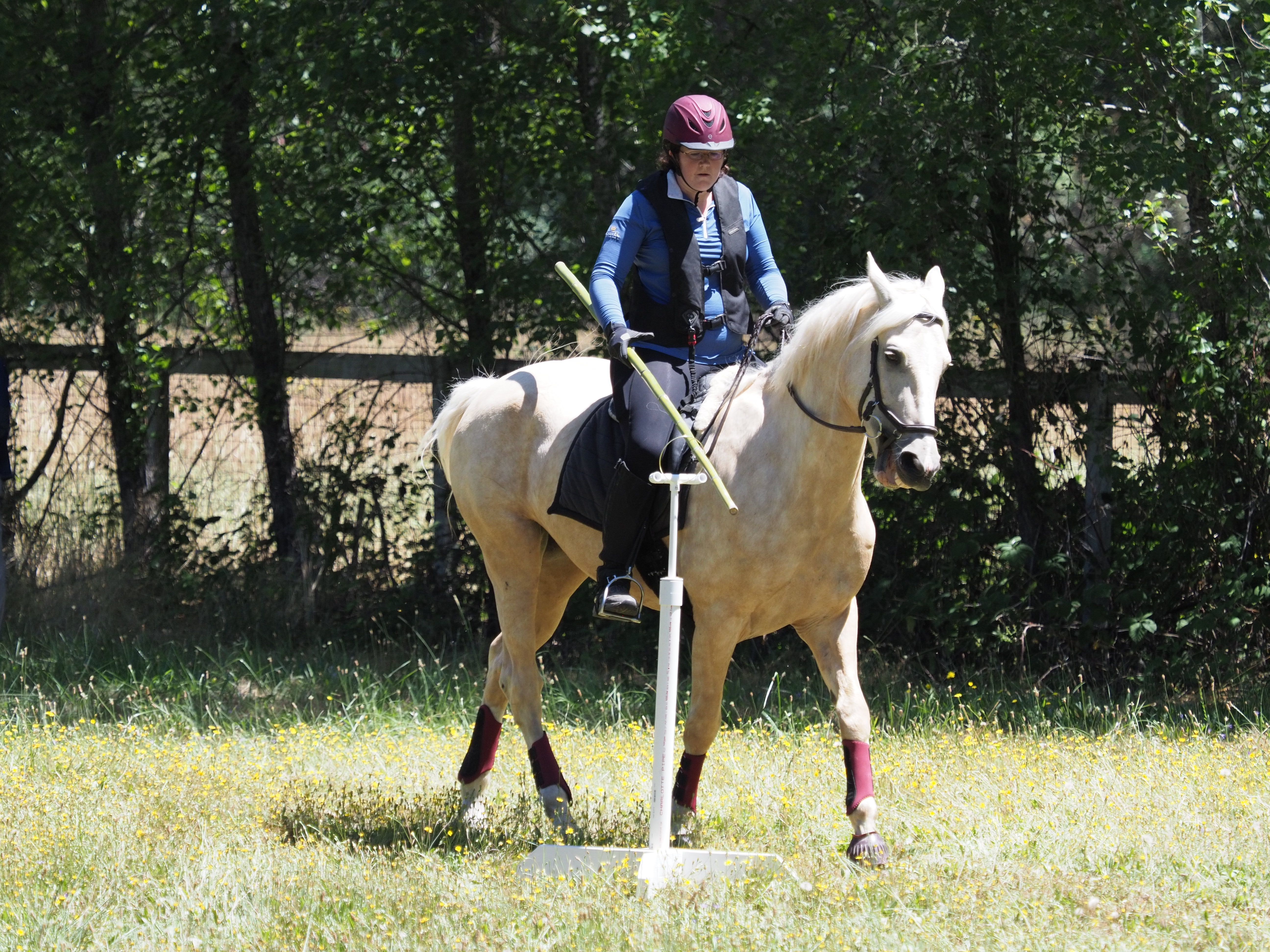 I managed to grab the pole and spear the ring at the trot – which is a considerable feat given my absolute lack of hand-eye coordination – and then I bounced the pole in the second barrel and it fell out. Apparently at a competition, I would have to get off, grab the pole, remount while holding the pole, then place the pole in the barrel or be eliminated. Umm. I can’t even mount from the ground when I’m not holding something. Guess I’m doomed.

Next we did the gate opening exercise and the halt, ring a bell, and then back up exercise. Levi was fine with the gate (he’s done this before), but distinctly displeased by the bell exercise. Halting is stupid. Backing is worse. We got through it after a few corrections. 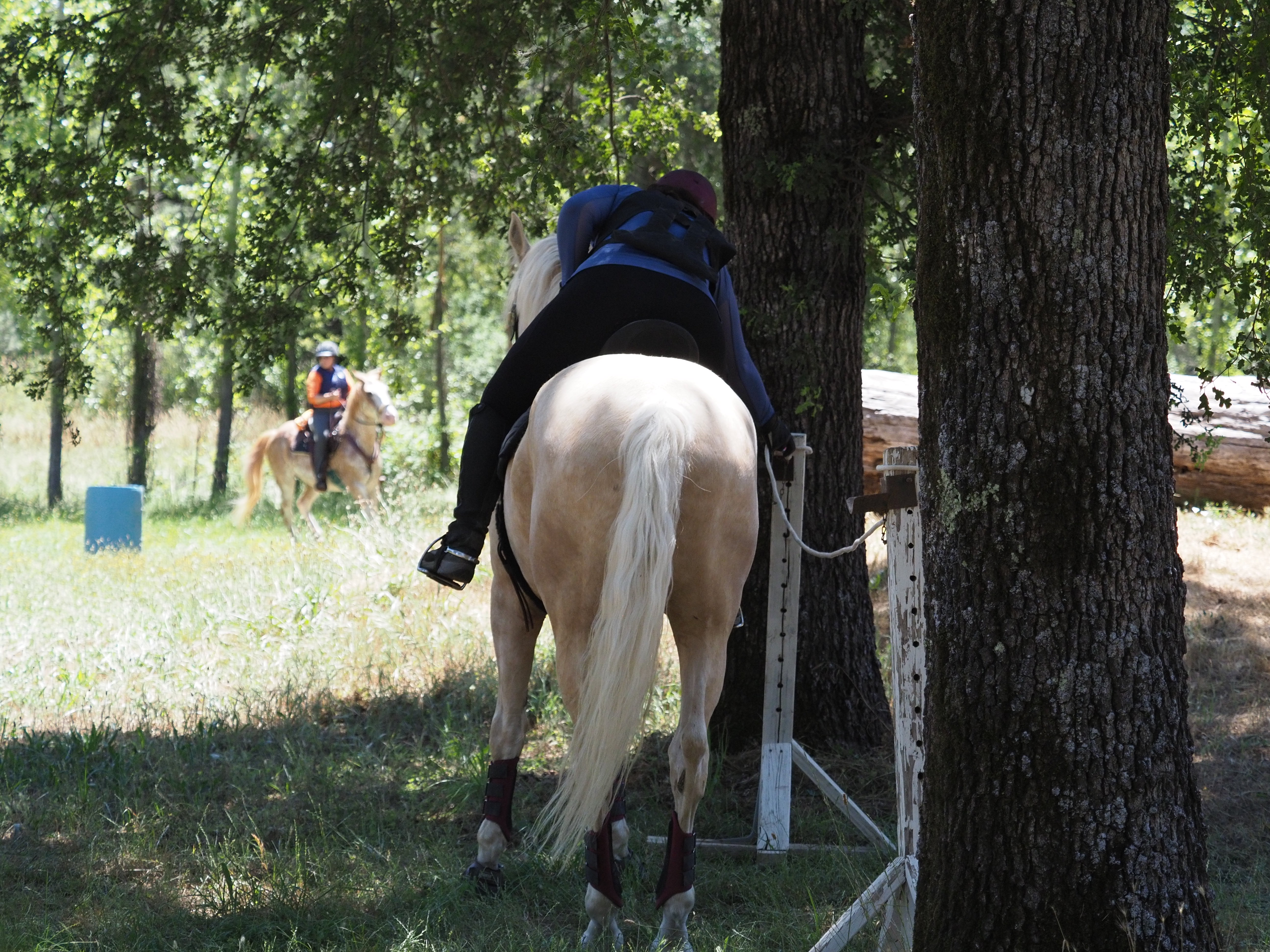 We ended with going through the slalom trees. There was a slalom with parallel posts (trees) and a single slalom. Levi was fine with this although the parallel posts were near where other people were doing XC (and by near I mean across a field, but he could see them) and he started getting frustrated. Luckily we were done at that point and no actual tantrums were had. 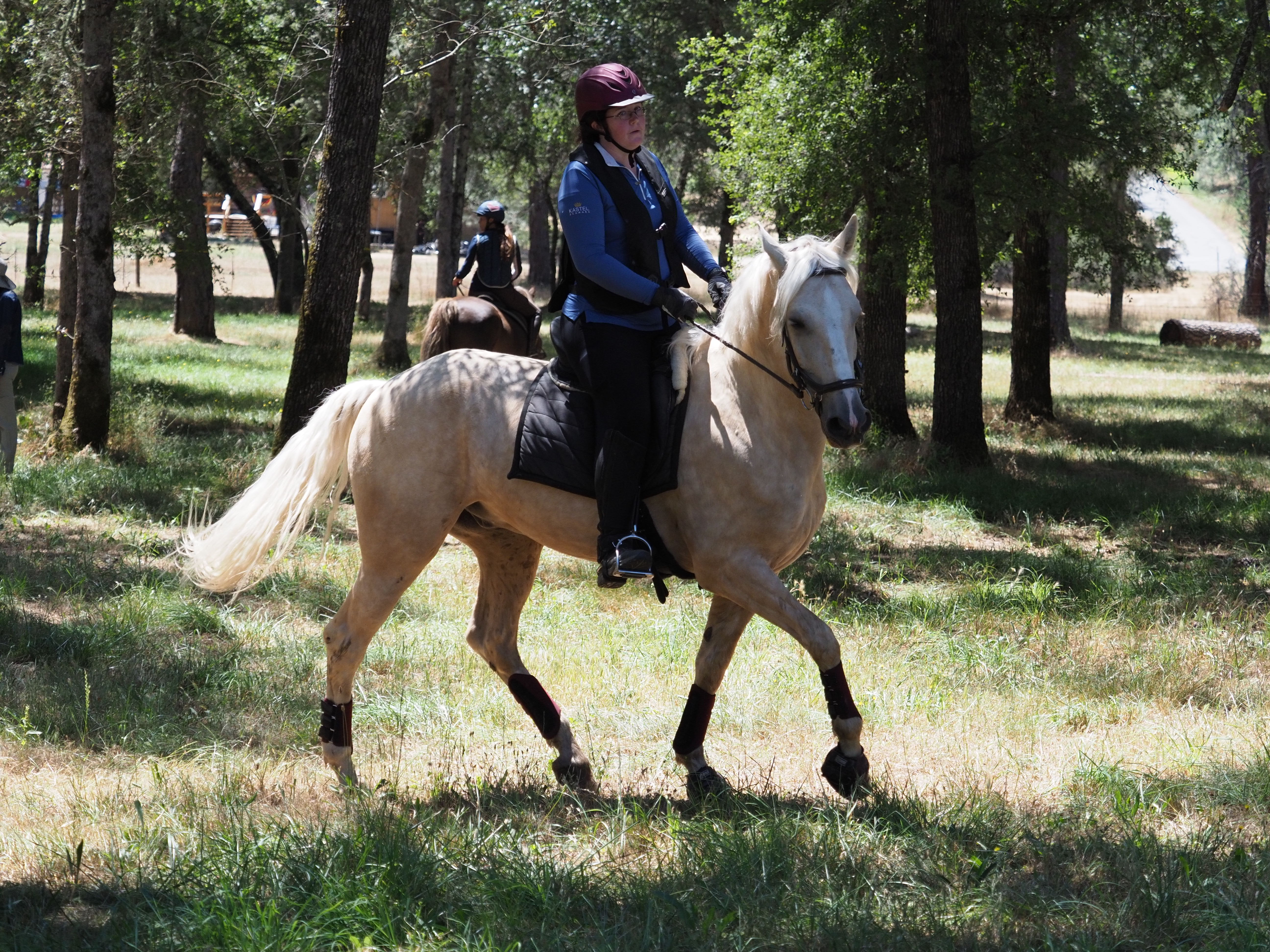 My husband did Cross Country for the second day. They started by doing timed/measured laps to practice their mpm. 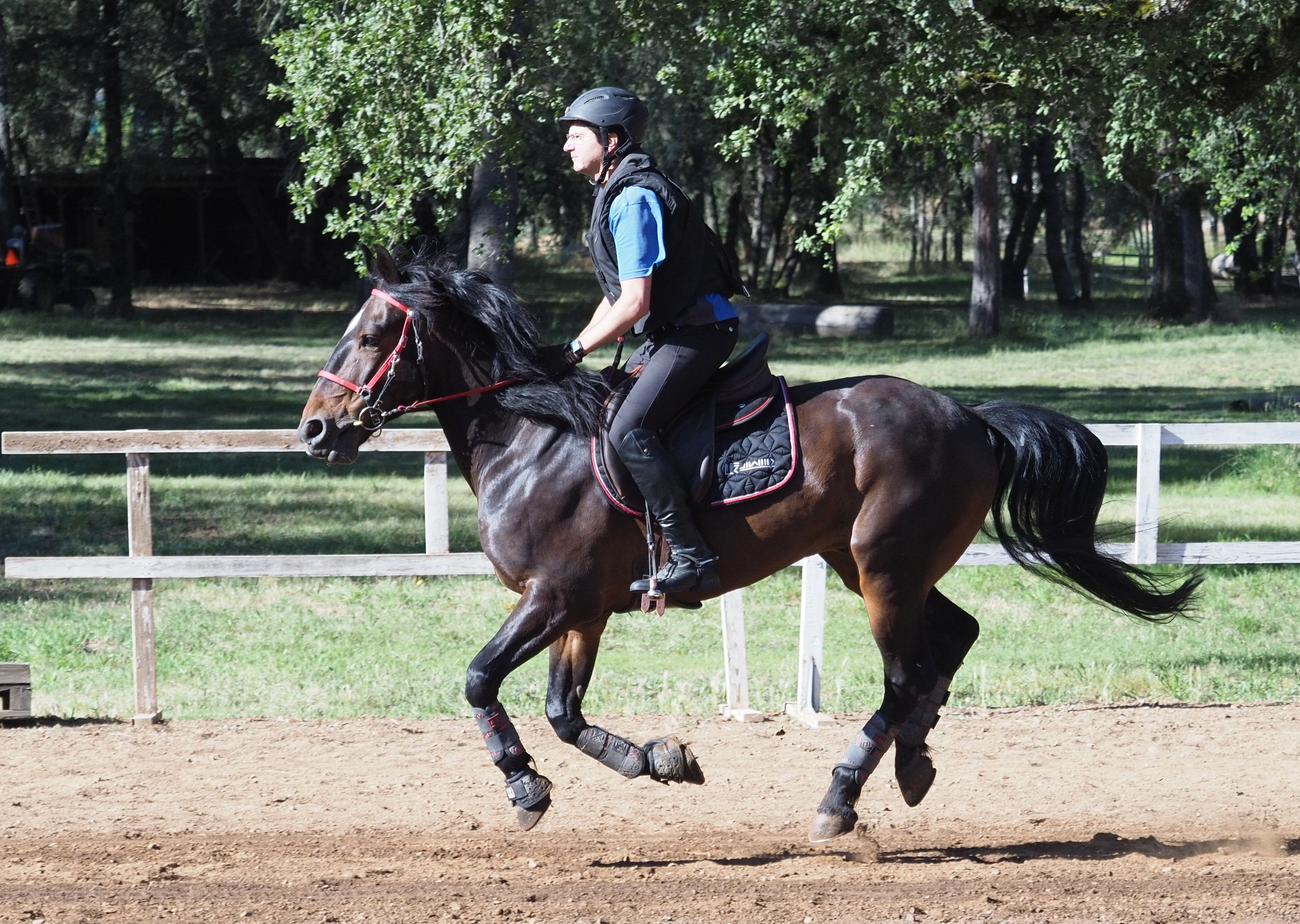 Apparently this is the only picture I have of this lesson. But they went on to do a bunch of other jumps, water, banks, etc. I did think it was interesting that the trainer had them doing all the BN jumps and calling them Novice. I’ve been to Eventful twice now for their HTs and I know the BN course. I don’t actually know what the Novice course is, but it’s not what they were doing. Whatever, it was still good practice.