Earlier this year, our favorite horse chiropractor got sick and retired. Before him I didn’t really believe in chiropractic work and I honestly still can’t point to any real scientific proof of efficacy, but the results weren’t something I could ignore. He was really good at figuring out what was wrong with our horses and the horses always improved – sometimes dramatically – after seeing him. Our horses also loved him.

On retiring, he referred all of his clients to another chiropractor and we tried him twice. He didn’t do anything wrong, but I just never felt the same magic as with the previous chiropractor. I kinda let chiropractic work slide after that though I kept thinking in the back of my mind that I needed to find a new chiropractor. With Levi’s recent behavior and Eugene having stifle issues, I decided I needed to finally pick someone. Kate recommended a local vet who did Chiro combined with acupuncture and we had her out on Monday.

I’m even more skeptical of accupuncture than I am of chiropractic, but I was open to trying it. I figured if chiro works even though it’s not scientifically proven, I should at least give acupuncture a chance. It helped me that the person doing the acupuncture was a vet.

We did Eugene first and it was a pretty extensive and lengthy procedure.The whole thing took over an hour whereas our previous chiro could do all the horses at our barn in that time. She first had him walk and trot back and forth and asked a lot of questions before examining him and then getting down to adjustments. He was more out on his left than his right side, but was generally in pretty good shape. 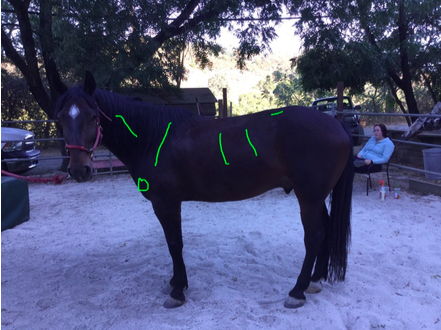 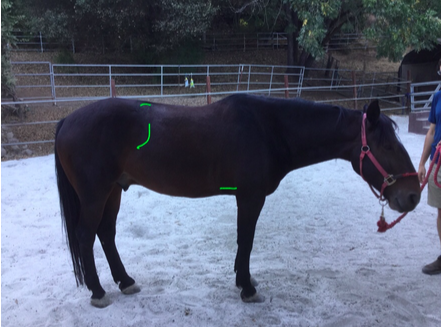 Because Eugene is still wary about strangers touching him, she chose not to do acupuncture on him. She said there wasn’t anything so terrible out that he really needed it and she wanted him to have a positive experience for the first time. She did some laser work on him instead.

Levi was up next and he had a lot of things wrong with him. He was back to being slightly off at the trot. It was nice having a vet for this appointment as I got to discuss more than just chiropractic issues. When I got him a year ago, he was diagnosed with having arthritis in the one hock, but that vet recommended not injecting it and instead building up his muscles and fitness as he had neither at that point. While he still needs to gain some more musculature, he’s better now and certainly a lot more fit. But now I’m asking him to do a lot more and it’s time to inject the hock. That’ll be next.

In addition to the hock, he was very out in his sacrum on that same left side. It took her quite a bit of time and work to get that back in place. I dislocated my own SI joint years ago and it makes moving difficult for me so I can completely sympathize with Levi feeling off with that needing adjustment. On the right side, he was out on 5 ribs. No wonder we couldn’t turn right. He also had a bunch of other things needing adjustment including poll, scapula, and sternum. Sheesh horse. 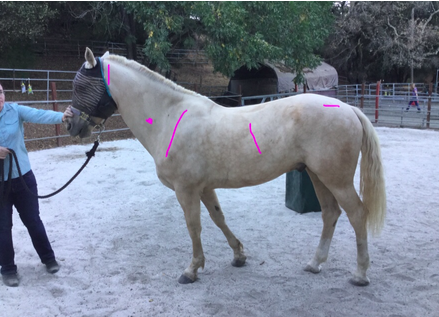 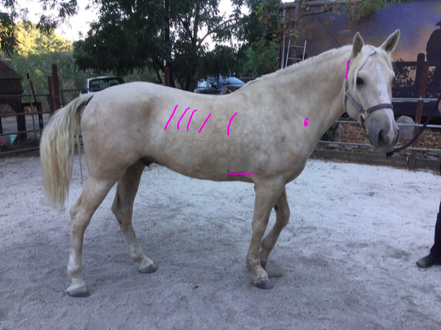 Levi got acupuncture in the following places: LI 16 bilateral, Bai hui, and Tuber coxae left. He was okay about it at first and we got a few minutes done while he also got laser therapy. Then a fly touched him and he tried to flick it with his tail, hit the needle instead and kinda lost his mind. He started bucking in place and managed to get his head around and rip out one of the needles before we got him stopped and pulled the others out. I think the vet called him a sensitive princess of a horse. She offered to correct it to price and I said no, princess seems fairly accurate for him.

I was really happy to get all of those issues addressed in both of them. Levi was better for his ride on Wednesday. Nothing miraculous, but he felt less lame and we had no temper tantrums. We could even pick up the right lead canter without any arguments or antics. So that’s something. Now I just need to not wait 6 months to do this again. I’ve been getting chiropractic work done on myself and I find I need to go at least every 2 weeks though sometimes once a week. I don’t have the time or small fortune it would take to get the horses done every week, but I do want to do it more often.