On Monday we went to see horse #3 since my husband had off for the holiday. He was also pretty close, just 50 minutes away in the East Bay. Horse #3 was a lovely 9 year old half-Arabian bay gelding. He’s a trained hunter with rated show experience. He’s also more than we’d like to pay, but was listed as being negotiable.

When we arrived the trainer had him tacked up and was walking him out to us. I would have preferred to see him tacked, but fine. The first thing I said was, “is this his tack? Because it does not fit him.” Turns out it was the trainer’s tack. The owner is off to college, has given up on riding and hasn’t been to the barn to even see him in over 8 months. His tack has already been sold off.

The pictures I got form this trip are worse than the last batch and I also forgot to take any of my husband riding. The trainer hopped on first and I did get a short video of her riding him.

Does this look off to you?

I am fairly sure this horse is off. I was actually staring so intently the trainer stopped and said, “I can see you staring at his legs, I promise he’s sound.” Because I’m going to take the horse trader’s assurance for this? We’d have him vetted if we got him, so I moved on. She trotted and cantered and popped him over some jumps. He was lovely: calm, quiet, knew his job and did it. Auto-changes and flying changes on command.

She hopped off for my husband to ride him and took her half pad off since the saddle was climbing his withers. My husband rode around a bit and when he asked for canter, the poor horse bucked. The saddle had slid up almost onto his neck. He was very nice about it. Just a little buck and then stopped like “I just can’t.” Didn’t try to launch him or spin or take off. I don’t blame him for it either. My husband hopped off, we fixed the saddle and they went out again.

Cantered a bit and then we stopped to fix the saddle again. They did some jumps and he was perfect. This is an incredibly well trained horse. He knows his job and does a great job of making his rider look great. Like I said before, my husband is a confident and experienced rider, but he’s not really savvy in advanced skills. So this sort of horse is perfect for him. My husband doesn’t know how to ask for lead changes, but it doesn’t matter because the horse does them for him.

While my husband was riding, I was asking the trainer questions. Which is why I forgot to take pictures. Turns out the horse was originally for sale with another barn for 40 and then 30k. Which is what a horse of this caliber would be worth is weren’t a) a half-Arabian and b) unable to make the lines. He’s too tall to be in pony classes, but he’s not big enough to make the strides in hunter classes without looking like he’s racing. And, let’s be honest, he’s an Arabian. He could make the lines and he’d still never win at rated shows because hunter judges are prejudiced. Plus his owner has completely given up caring about him or horses at all.

So he’s cheap. Like less than 1/3 his original price. Although I do wonder if some of that isn’t because he’s slightly off. Or maybe he isn’t. I don’t really know. I see lameness in everything I look at. We’d have a ppe done before purchase, but some red lights are going off with me.

Apparently he does well in the jumpers, but caps out at 3′. Since my husband wants to do BN level eventing that’s all fine. He doesn’t need to make the lines in stadium or xc and he’s careful and safe so my husband would do well with him.

I hopped on and asked him to go like a dressage horse, which he really did not understand. He was like, you already asked me to trot, we are trotting, why are you nagging me with your leg? He’s so point and shoot, he just does what he’s supposed to do and doesn’t understand other things. I did do some contact exercises: asking with inside leg to outside rein and a wide, leading inside rein to get bend. He gave me a few moments of contact. Really, he was a good boy and I don’t blame him for not understanding something he’s never been taught. When I asked for things like a hunter, he was perfect. And he had the nicest trot. I did sitting trot the whole time and it was so comfortable.

However – and this is a big however – he’s a bit pokey. Like, I would have preferred to have spurs on. And the trainer usually rides him in spurs. Now, if my husband solely wanted to do h/j shows, we could deal with this, but the horse also needs to do endurance. And he needs to have a bit more pep for that. You can’t kick a horse through 25 miles. Well, you could, but it’d be miserable and you probably wouldn’t make time. The horse has to want to go. With everything being mud, we couldn’t take him out on the trails to asses his trail skills.

Finally, his feet are a mess. He’s been in shoes all his training life (so the last 4 years) and he has under-run heels. The trainer even commented on how great his feet were and I was like, “umm… no.” And he’s over at the knee. 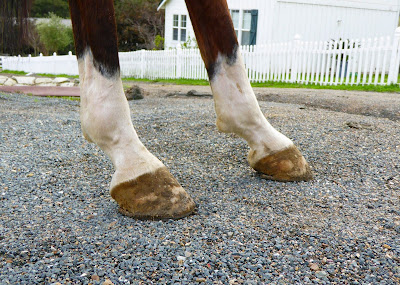 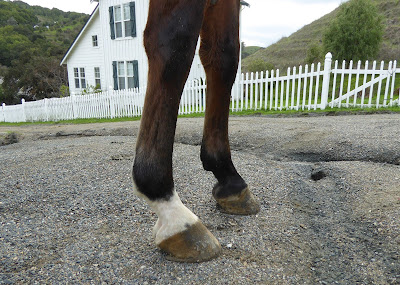 My husband rode him out around a little gravel trail around the outside arena and he was great, but it’s not a real trail. The trainer won’t let us do a 30 days and we cannot asses trail skills at the barn as it currently is so we’re pretty much at an impasse. He’s very sweet and clearly would like to have an owner again. He was begging for pets from the moment we got there.

We have some more horses scheduled to look at this weekend, but with the huge rain coming in I don’t know if that’ll happen. Keep the recommendations coming.