I’m skipping ahead of horse #4 – though I will do a post on him later because the amount of drama and craziness in that story is epic – and onto Horse #5 as he’s an actual candidate. 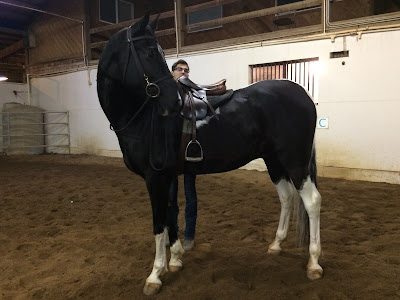 This horse was actually a late addition to our shopping excursion on Sunday, but we figured we were already 2.5 hours from home, what’s another 90 minutes? This is a 9 year old, 16.2hh Saddlebred/Arabian cross gelding. He’s a true black (not dark bay) and white pinto. And he’s a sweet-heart.

And he’s has spent his life in the Arabian flat hunter show world. Have you ever seen these classes? They more resemble saddle seat than what USEF hunters look like.

The whole experience was a little bizarre. The barn was out in the middle of nowhere. Nothing but farms and cattle as far as we could see. And the last town had been a while ago. And the sun is setting so I’m starting to get a little worried. Then we pull up and it’s this luxury stable with a lit indoor arena. And not only is this stable fancy, the horses are clearly fancy as hell.

We’re not in the same league.

When we arrived, the trainer was actually working with the horse’s owner and one of her other horses. She owns 5 – down from 7 – and he’s making her pair down to 3 to be more competitive with those three. She’s going to the Scottsdale Arabian Show with the other horse, which was also gorgeous. So the horse we were looking at is a good horse, but just not in the same quality as these super fancy horses.

The trainer was great. Pulled him out of his stall, groomed him, let us poke and prod and ask questions. Then he trotted him back and forth and lunged him for us. As he was trotting around, I commented to my husband that this is the soundest looking horse we’ve looked at. And given the atrocious state of his feet, this was rather surprising.

The first question I asked was “how crazy is he?” I’ve seen a few of the saddlebred/arabian crosses at endurance rides, and read about others. And every one of them has been crazy. I even had a conversation with Fig before the horse shopping started about how I hoped to avoid this cross. The trainer said (I take everything a trainer says with a grain of salt) that’s because they’re usually rejects from the show circuit. The horses get “jazzed up” in order to make them good show prospects and then if they can’t make it, their price drops and they got sold off to endurance people. We were told this horse was hot, but not crazy.

We had the trainer ride him first and he looked good. Walk/trot/canter, just basic stuff. He comes back down to walk really nicely. No jigging, no anxiety about going faster, but he goes when you ask. He clearly has energy and some high-stepping moves, but he comes right back and behaves when you ask. One big drawback to this horse is that he’s very retracted/ behind the bit. Of course, he’s been trained to be this way so it’s not his fault, but I imagine untraining it will be pretty difficult.

He also absolutely knows nothing beyond w/t/c and go around the edge of the ring. He can circle, but it’s not awesome. My husband tried to get him to do a turn on the hindquarters and he backed up. I asked the trainer what he works on with him and he said, “going around the ring and trying to keep his head down.” Well then.

My husband hopped on next and went bouncing around. Shasta is a quarter horse. She moves in the low, swinging, easy/flat fashion of a quarter horse. It’s very comfy and very easy to ride. This horse rides like a rocking horse. He’s also trained to “cluck up” to his big trot and “kiss” into canter. I told my husband this as I was watching the trainer ride. My husband rode him and did none of those things so when I went to get on the trainer came over with me and explained all that and I was like, yeah, I know.

My husband did have a good ride though. Just w/t/c, but he was very well-behaved. I hopped on after and it started raining as I was getting on. The horse really wanted to look at the open side of the arena because a horse had walked past out there going to the round pen. We had some major discussions about going straight instead of swerving all over the place trying to stare outside. His attention was just not on me at all. I finally asked him to canter away from that side and he pitched a little buck. I got the hell after him and he settled down and actually listed to me after that. He has lovely gaits. The trot is easy to sit and the canter, while big and rocking, is really comfortable to sit. 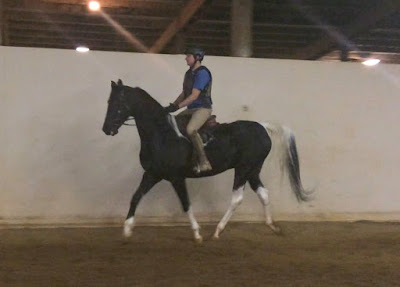 He’s another one who knows his commands and knows his job and does not understand why the hell I am bugging him with my leg. I don’t blame him. Once we got past the whole rain noise + horse outside distraction, he was very good. He’s a well trained horse who is forward without being crazy hot.

I liked him. My husband liked him. However, we weren’t able to try him on any trails since it was pitch black outside and raining. We also weren’t able to try any jumping with him because apparently he’s never done that before. My biggest concern though is the long, long back on this horse. He’s out of shape right now and never asked to not go hollow, but no matter how much muscle we put on that topline, it’ll always be long. The back is an issue for both longterm soundness and dressage/jumper/endurance skills. He may have a hard time putting himself over a jump or over rough terrain with the disconnect between the front and back end.

My husband wants to go back next weekend to try him on the trails, but it’s supposed to rain again next weekend. I also highly doubt this horse will stay on the market for long. He’s going to get snatched up.

Any thought from readers? I’d especially love to hear from anyone with Saddlebred experience. This is one type of horse I’ve never really worked with before.