For the schooling show on Sunday, my husband initially signed up for .60-.65 jumpers, 2’3″ Hunter Equitation, Training 1 and Intro C. However, the show was running a Hunter Derby and he wanted to enter that. We thought the dressage times would be early and didn’t want to stay all day for the derby, but dressage was actually in reverse order (our Intro C times were 3:06 and 3:20) so we figured we might as well stay for the derby. When we checked in, we swapped from Eq to the derby.

The jumper judge was holding a sort of mini clinic at 8am with a walk of the course and a discussion of how to do a course walk, how to plan for a good round, etc. We went over for that, but my husband was in the 1st jumper division at 9am so we had to leave early to get Eugene ready. It was interesting though; I wish we could have stayed for the whole thing.

Eugene warmed up like a giraffe on crack. He was just completely on edge and way too excited. 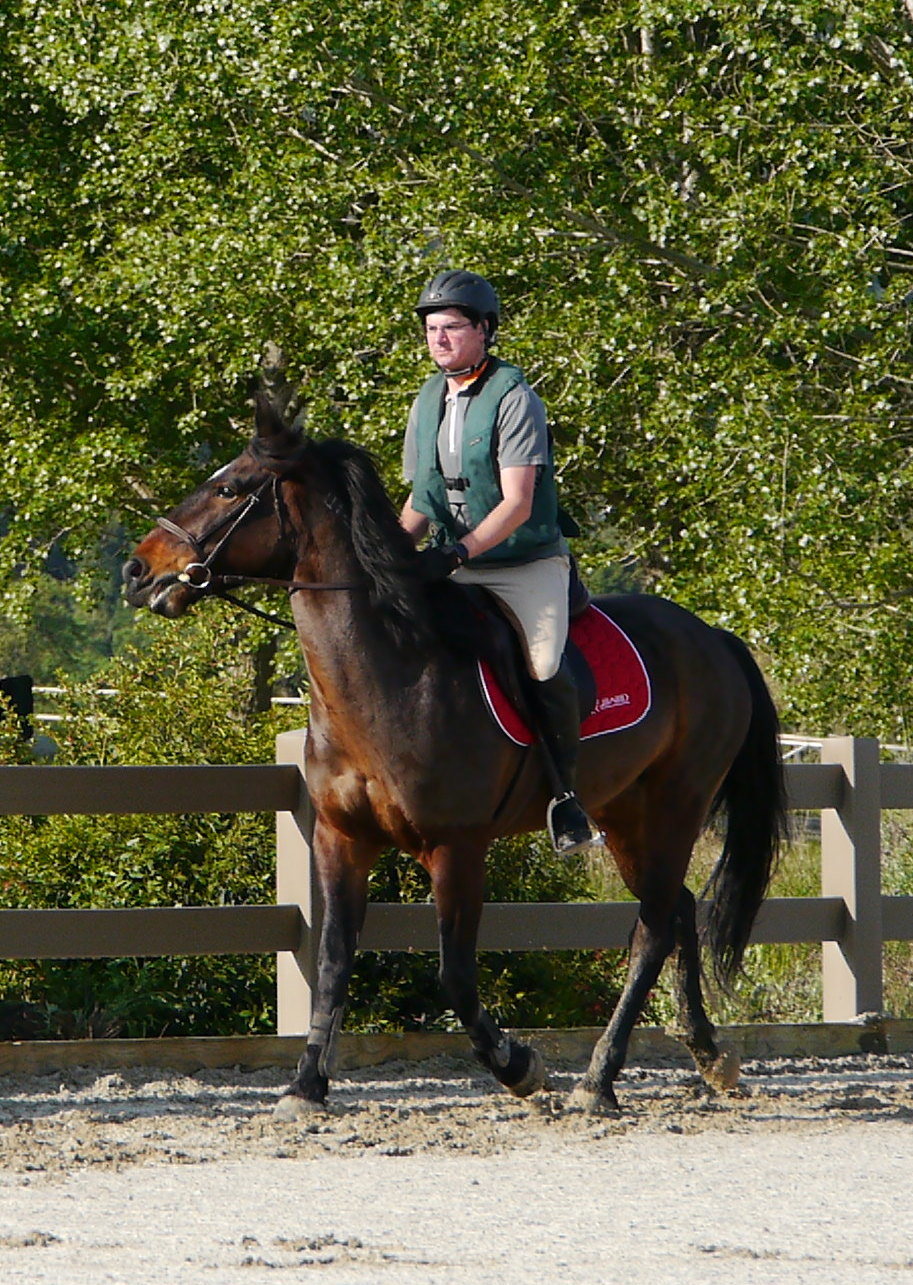 The jumper ring was also suffering from a complete lack of people showing up and going in the ring. There were like 5 other horses in the warm up, but no one would go in despite the judge and the girl running the gate making several announcements asking for a volunteer to go first. Finally, my husband felt like Eugene was warmed up enough and offered to go.

The first round was optimum time. The footing was an absolute swamp so I warned my husband to take it slow. Eugene, however, wanted to do his best superman impression and flew around the course. The jumps were lower than the posted .60-.65 – possibly because of the footing –  but Eugene has gotten to the point where he does not respect little jumps like this and just races around them. 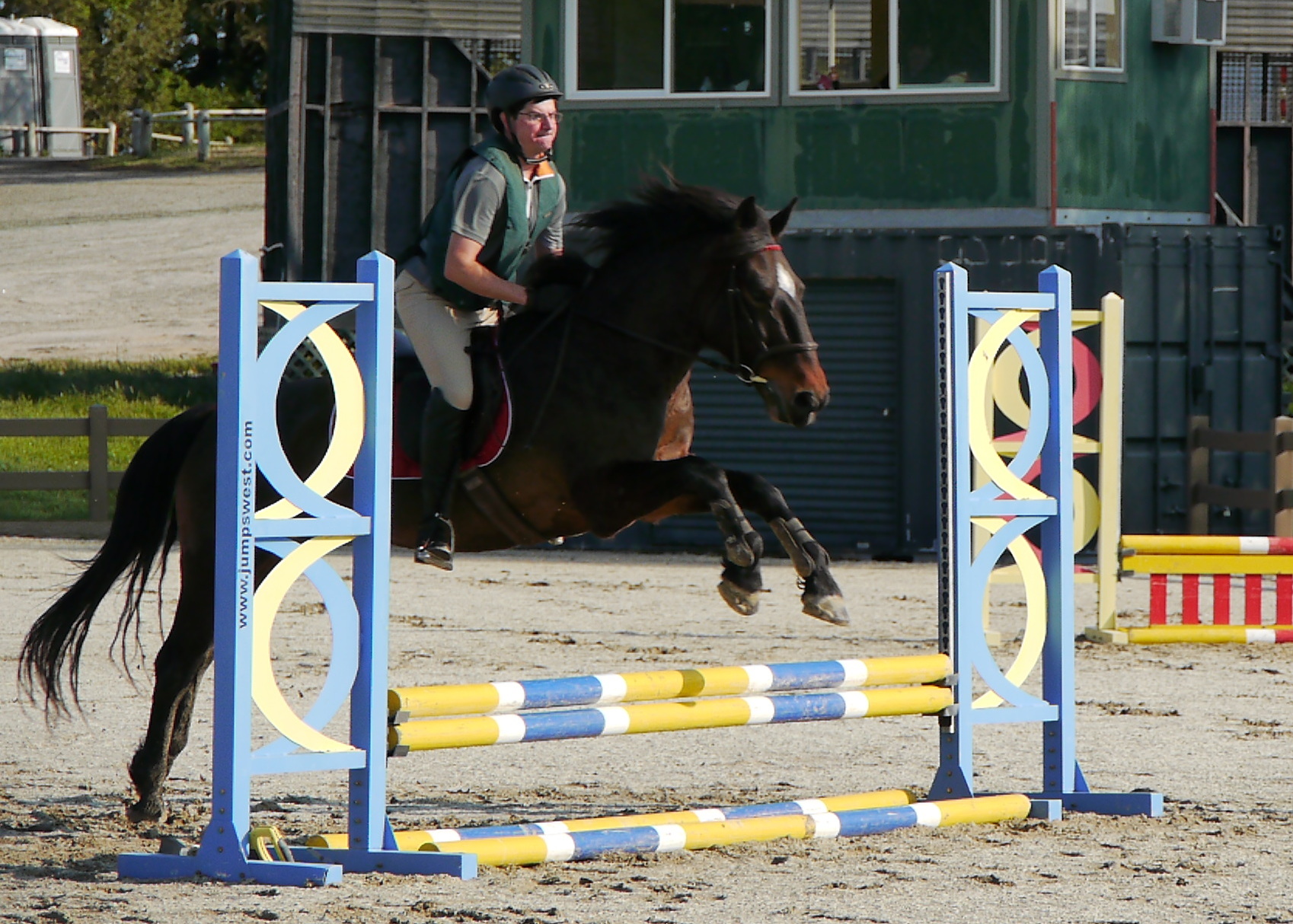 He also spooked at some innocent spectators. I wish I’d gotten video of that line, but you can see from his body angle just hot much he was trying to squirrel away from those people. 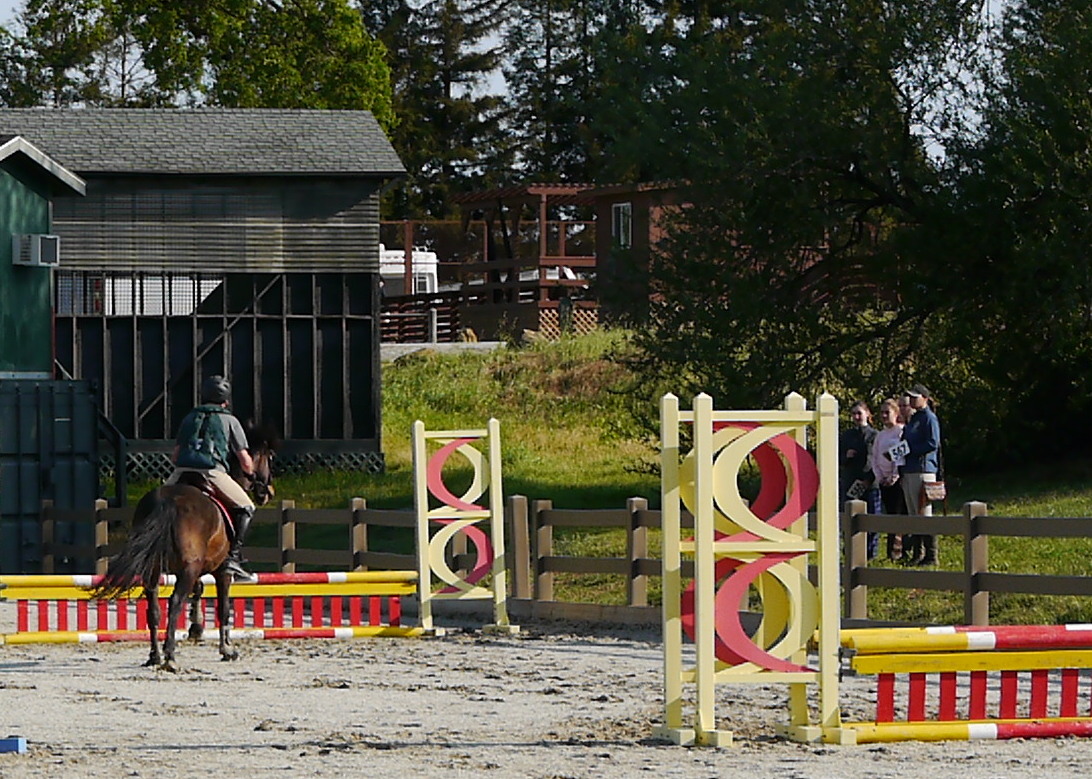 They were clear though and 75 seconds against the optimum of 72, which is pretty good. One person – ONE – volunteered to go after my husband. At this point there were like 10 people standing around on their horses, but no one would go in and do the course. My husband went to look at the course and plan for his speed round and then ended up going back in for his 2nd round as the 3rd rider in the ring. 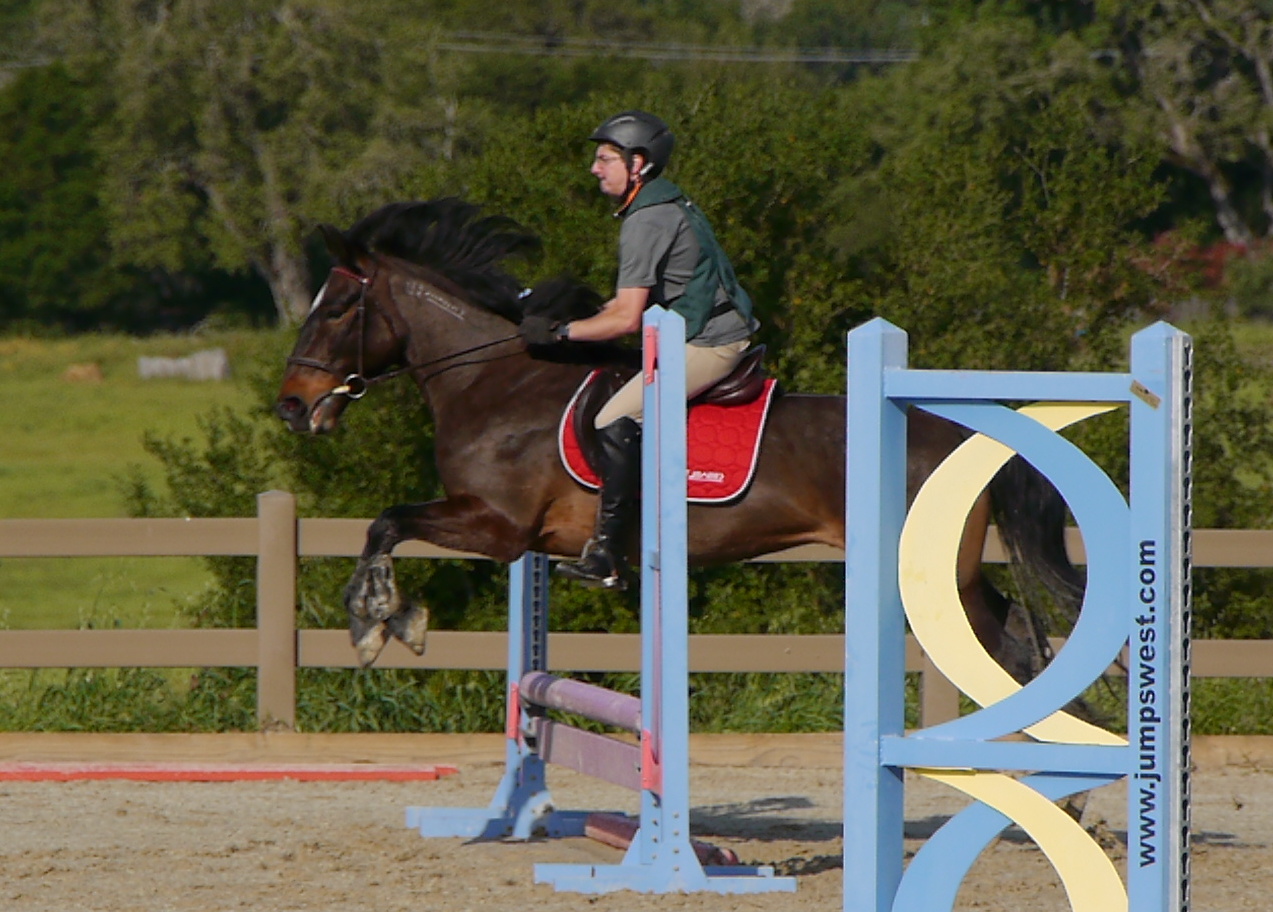 Eugene was still pretty lit and this time he spooked at nothing and took off bolting across the arena after the bell rang. My husband managed to get him back in control and around to the first jump before his time ran out, but Eugene continued to fly around like it was a race. 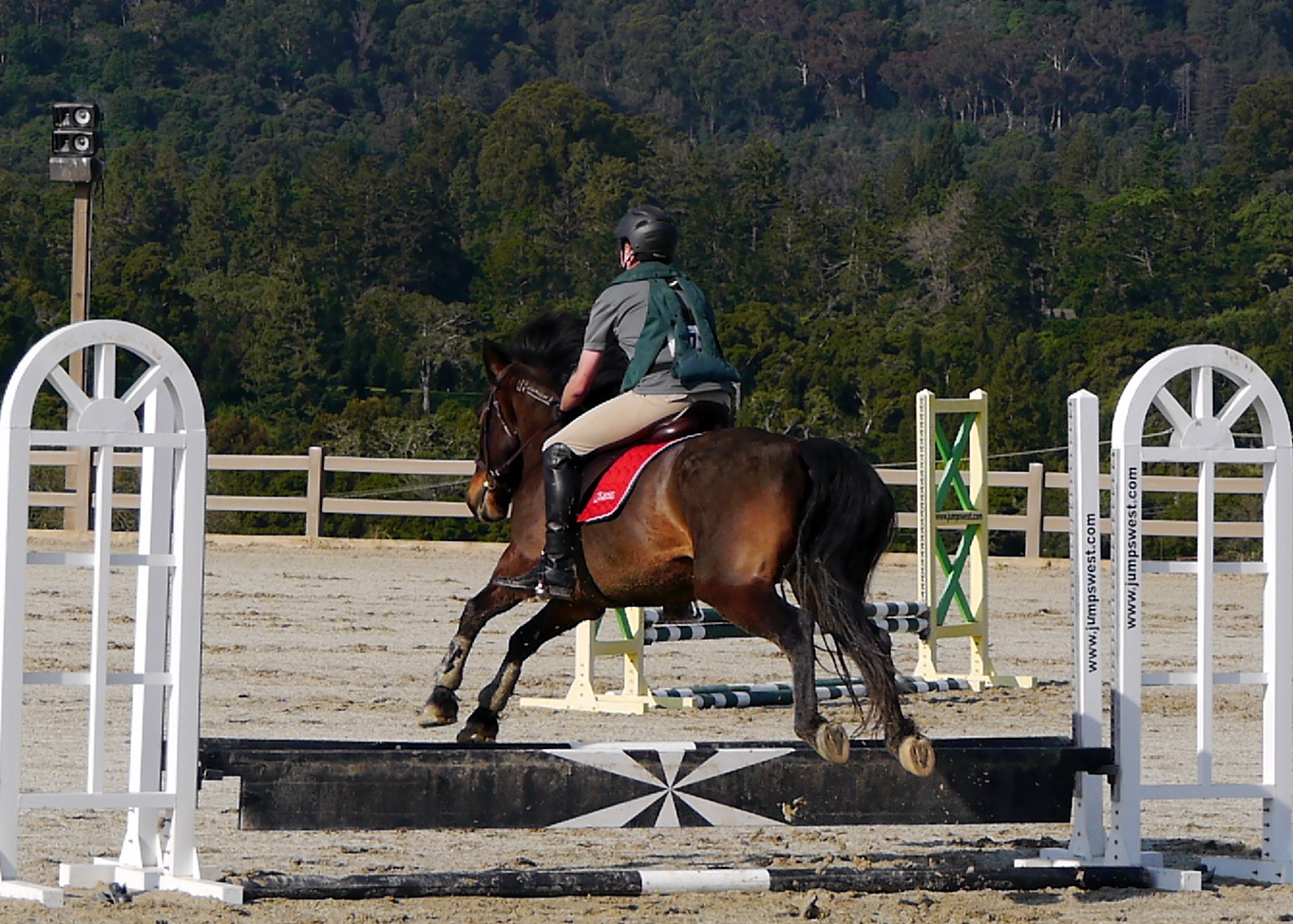 Sadly, his over-enthusiastic approach wasn’t very organized and he ended up knocking a rail. 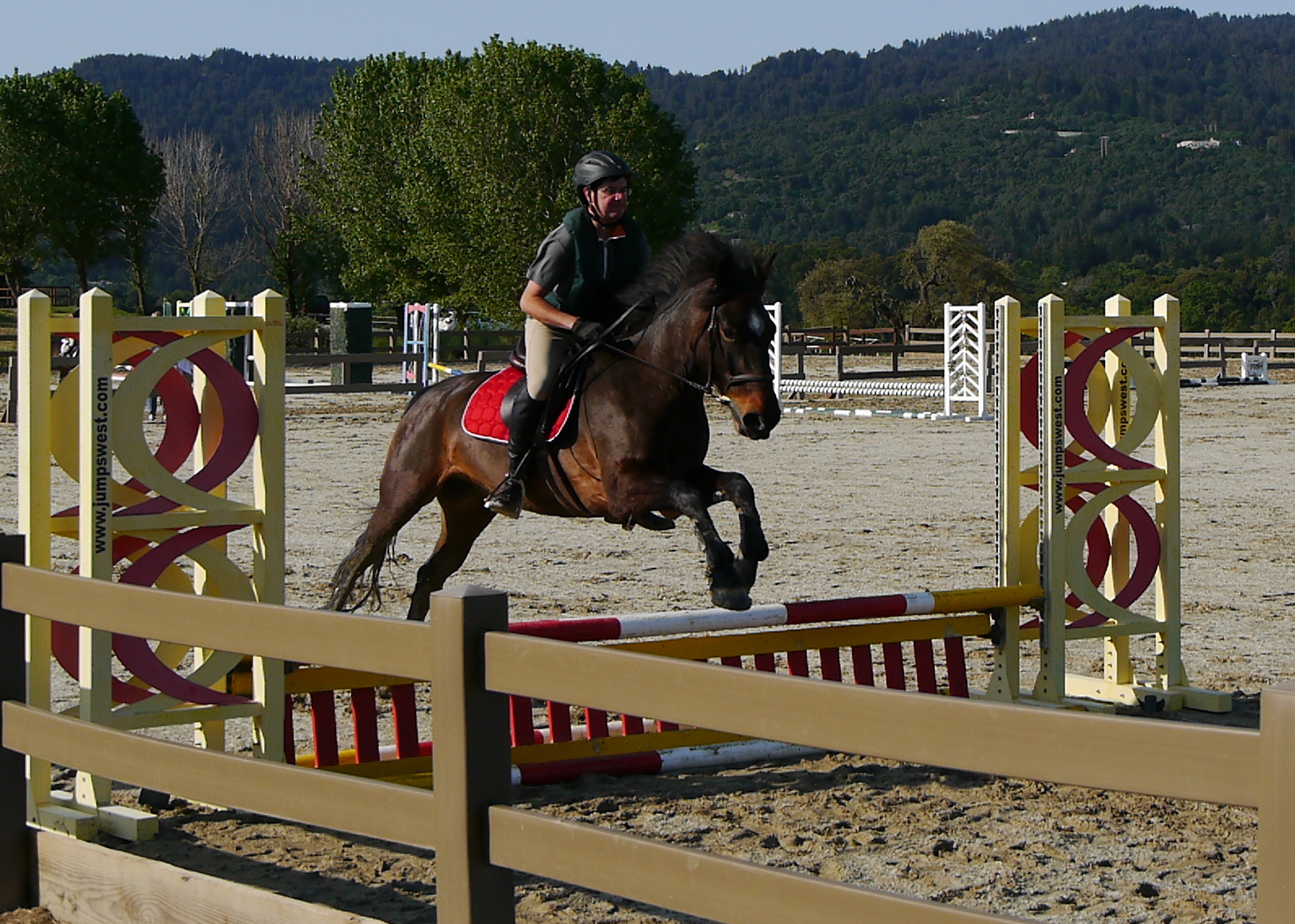 Even more unfortunately, my husband didn’t realize there was a 10th jump and just stopped after the 8-9 line. So frustrating. It totally wouldn’t have happened if he hadn’t gone first since it’s not that he forgot it; he literally didn’t know it was part of the course. Oh well, that’s why it’s a schooling show. While sadly eliminated from the speed round for the missed jump, they ended up getting 3rd for the optimum time round. My husband was pretty happy about that since there were actually a lot of competitors in that class.

We left the jumping arena to go get Levi ready for his Hunter rounds. The girl running the gate said they had 25 entries across the 2 classes. Because people were not going in and this show won’t force anyone to go or end the class before everyone who signed up goes even if they aren’t there, this division took FOREVER. I actually ended up picking up my husband’s ribbon at 11am, 2 hours after the division started. This kind of waiting and I do not agree; I am just not cut out for H/J shows.

Back in the world of good ideas, dressage actually has times and their time for Training 1 was 11:32 so we went over to warm up at 11. Eugene was still a bit excited, but I think the whole going to a lot of shows thing is paying off. This is the first time he hasn’t spooked at a judge’s booth and he’d never even seen this judge’s booth before so that was doubly impressive. 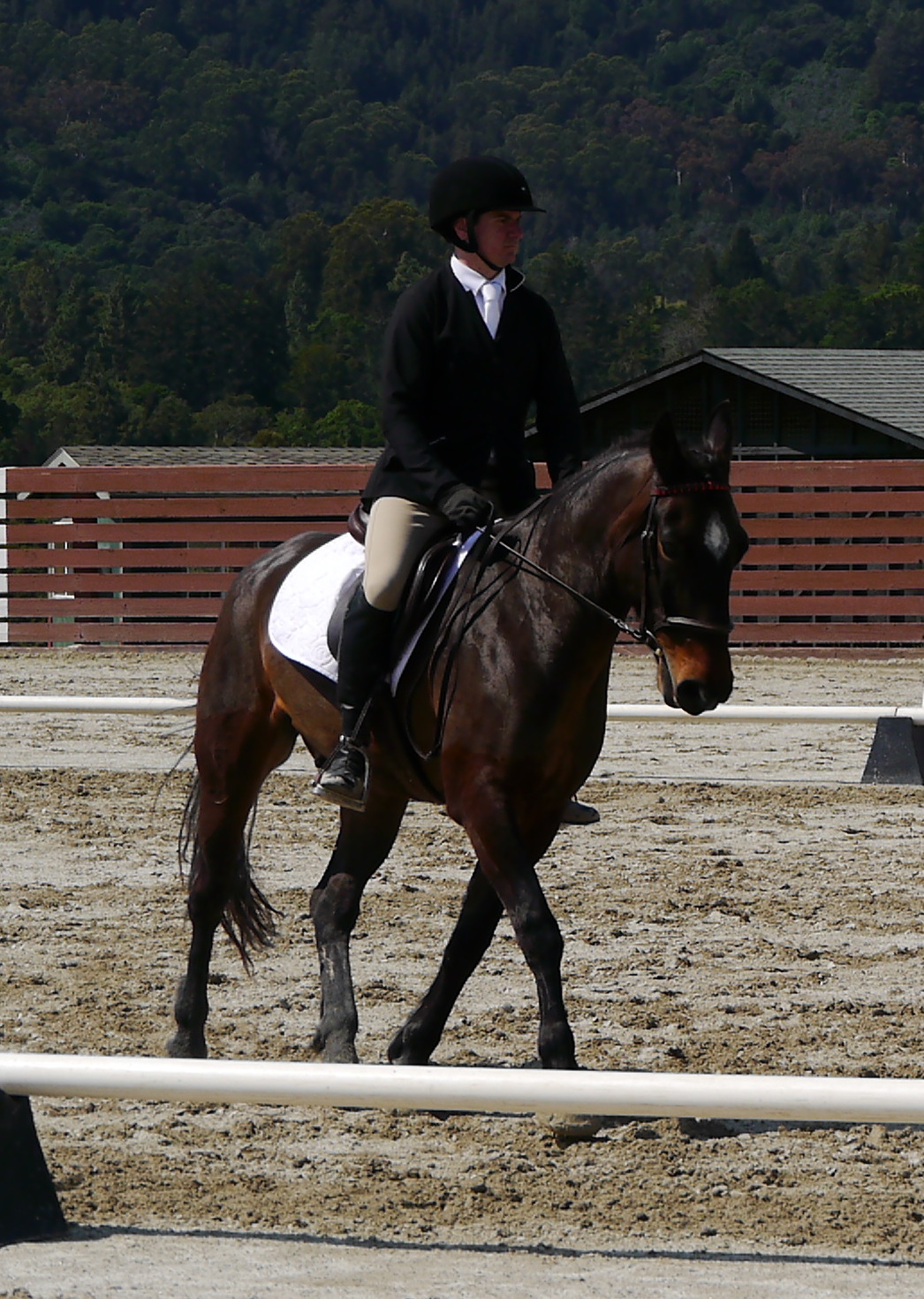 Eugene isn’t really a dressage horse and I don’t think he ever will be, but he was really good for his first Training test. He was a little looky and not really collected, but their trot work was actually pretty good. Canter was a little too fast and strung out, but he was trying very hard to be good. 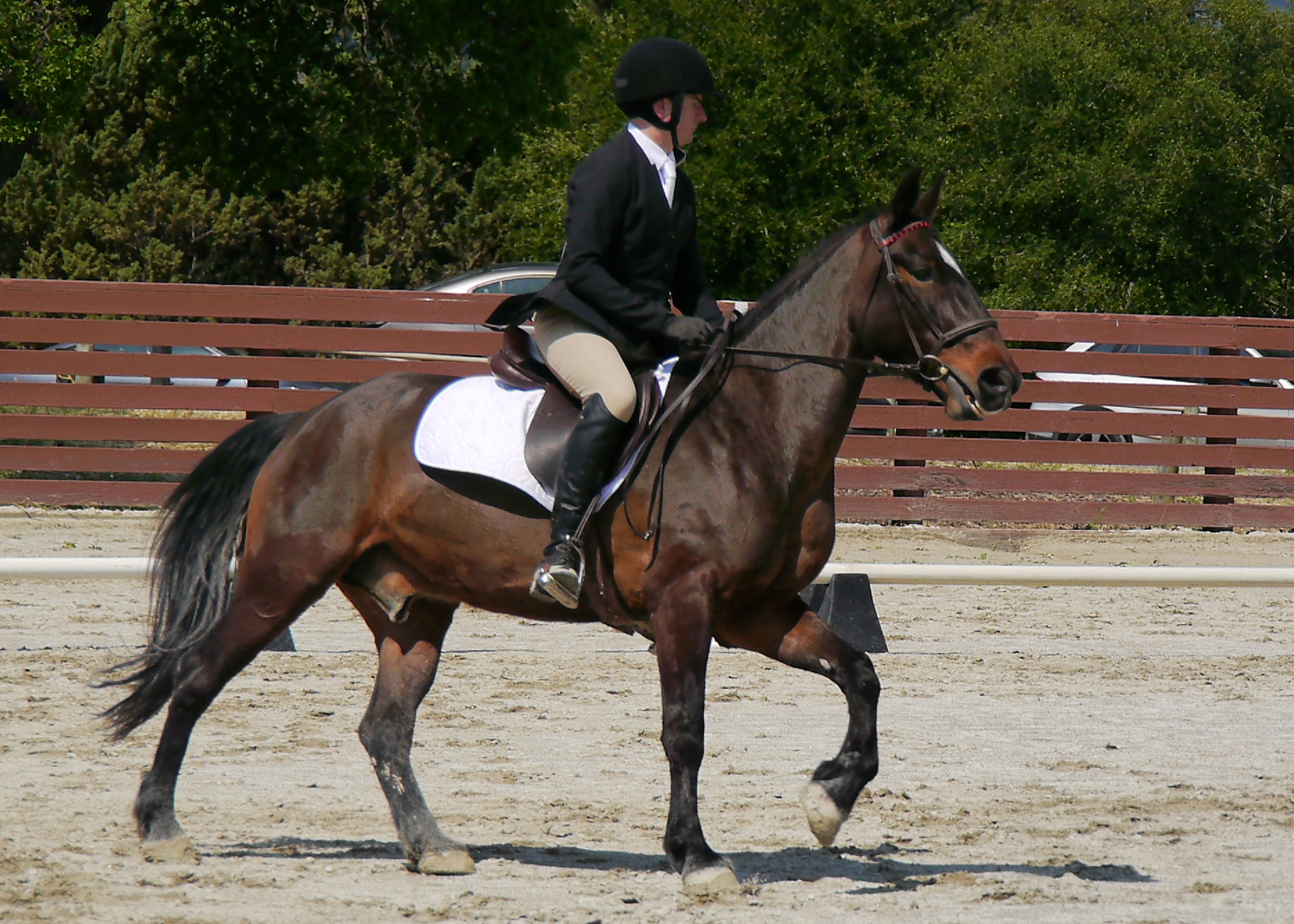 He might be a bit racey at the canter, but this horse has a nice halt and they got an 8.0 for it. 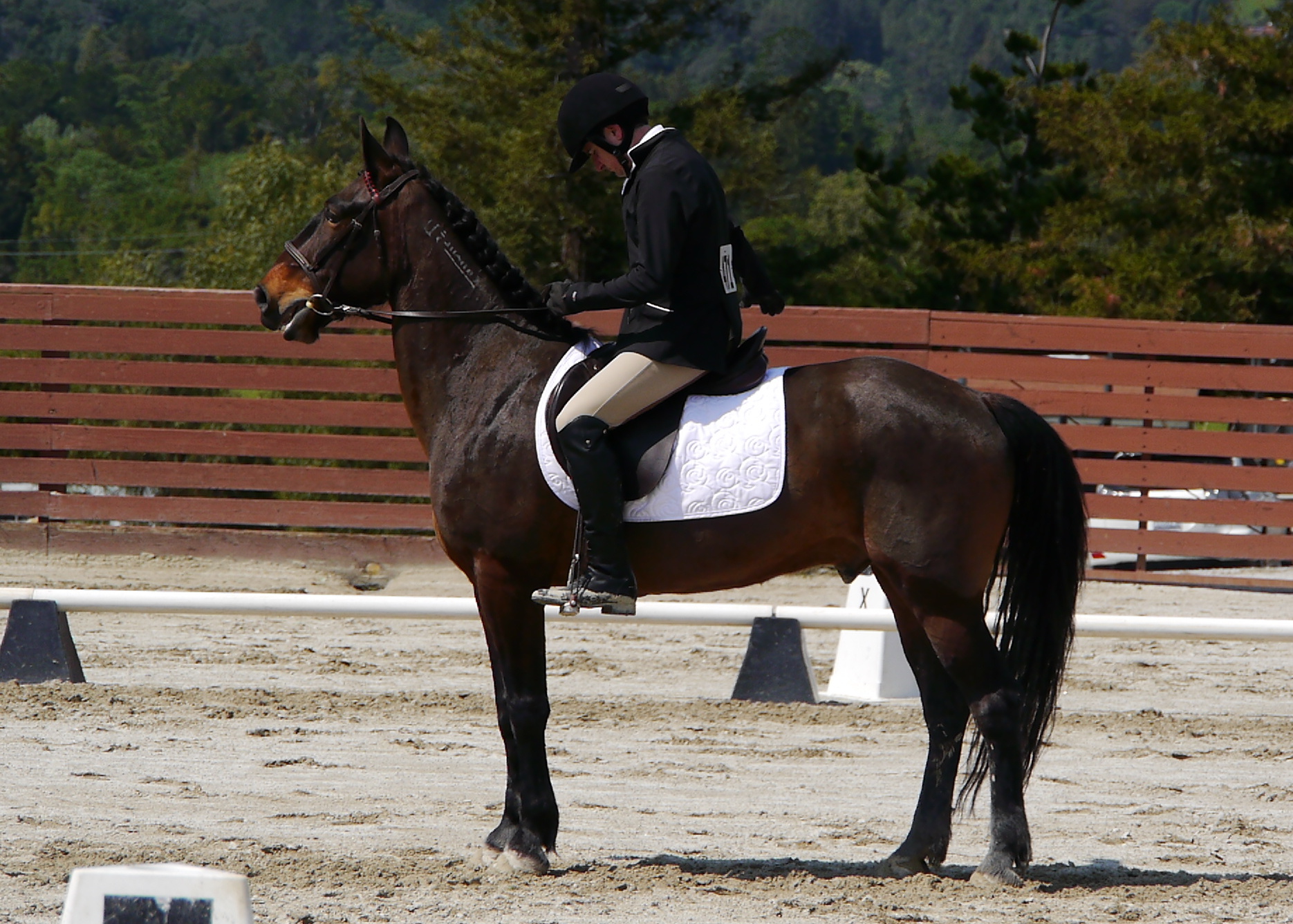 Final score was 63.26%, which we both thought was pretty great for his first training test. Especially given he has never practiced this test before. Sadly there were 16 people doing Training 1 so he didn’t get a ribbon. But the real reward was just how good he was. 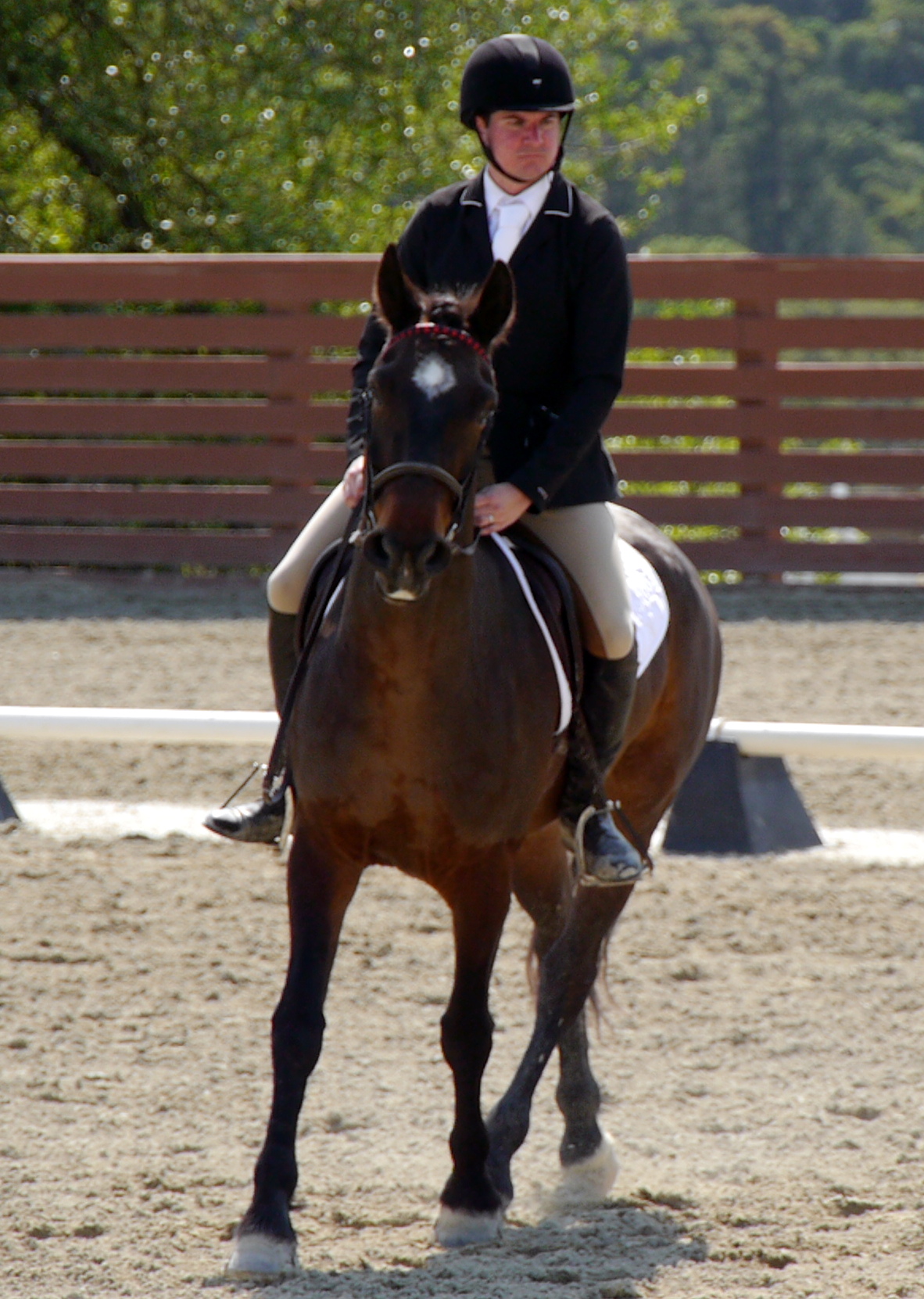 My husband also did Intro C and went after me. As we were sharing a helmet (we really ought to own 2 show helmets), my husband had to wait for me to finish my test before he could warm up and he was a little rushed since the scratches meant he ended up going earlier than planned. 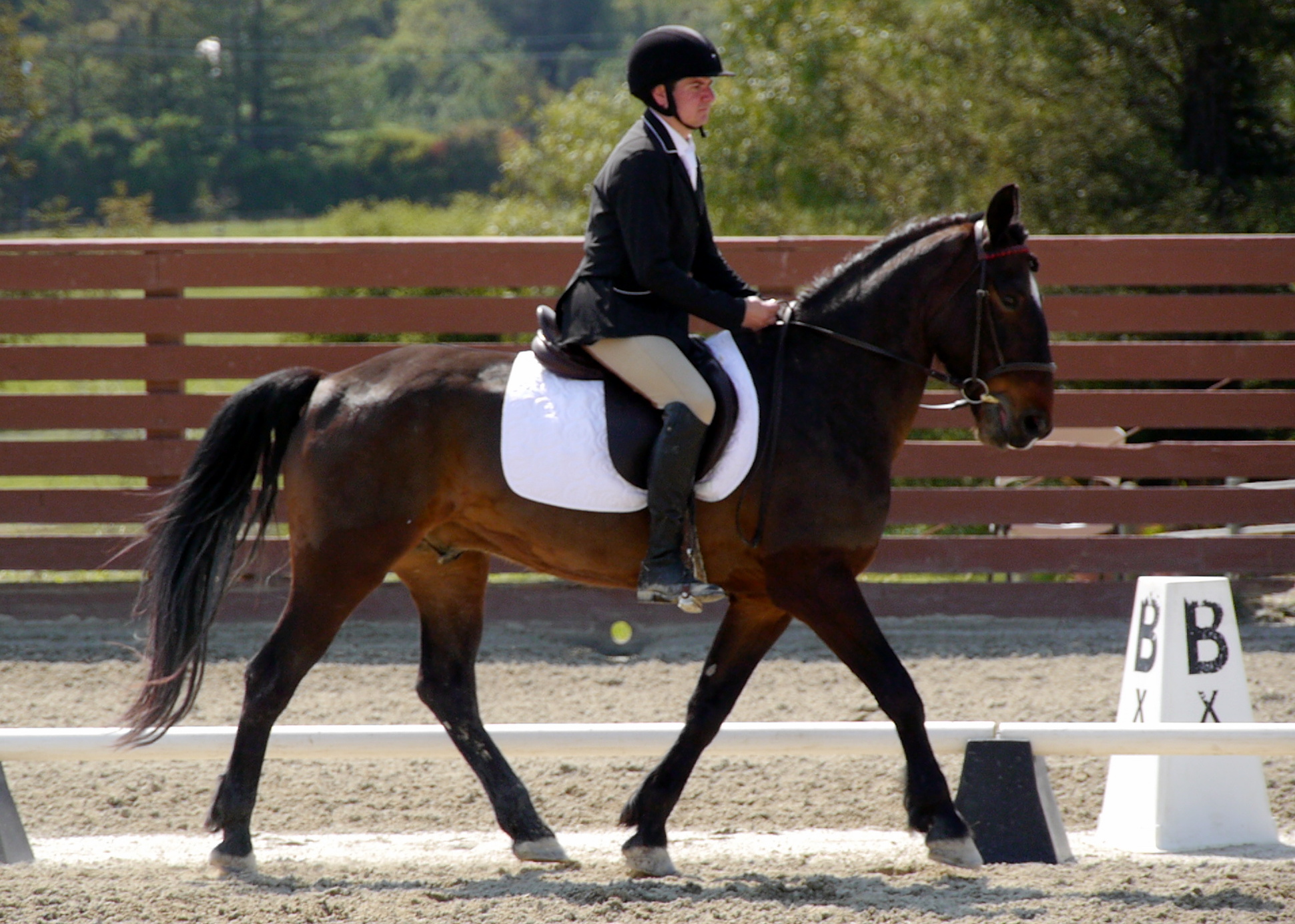 Intro C is still an awkward test with a very rushed canter and that didn’t play to their advantage. At least Eugene picks up his canter on cue, but he doesn’t always look so graceful doing it. 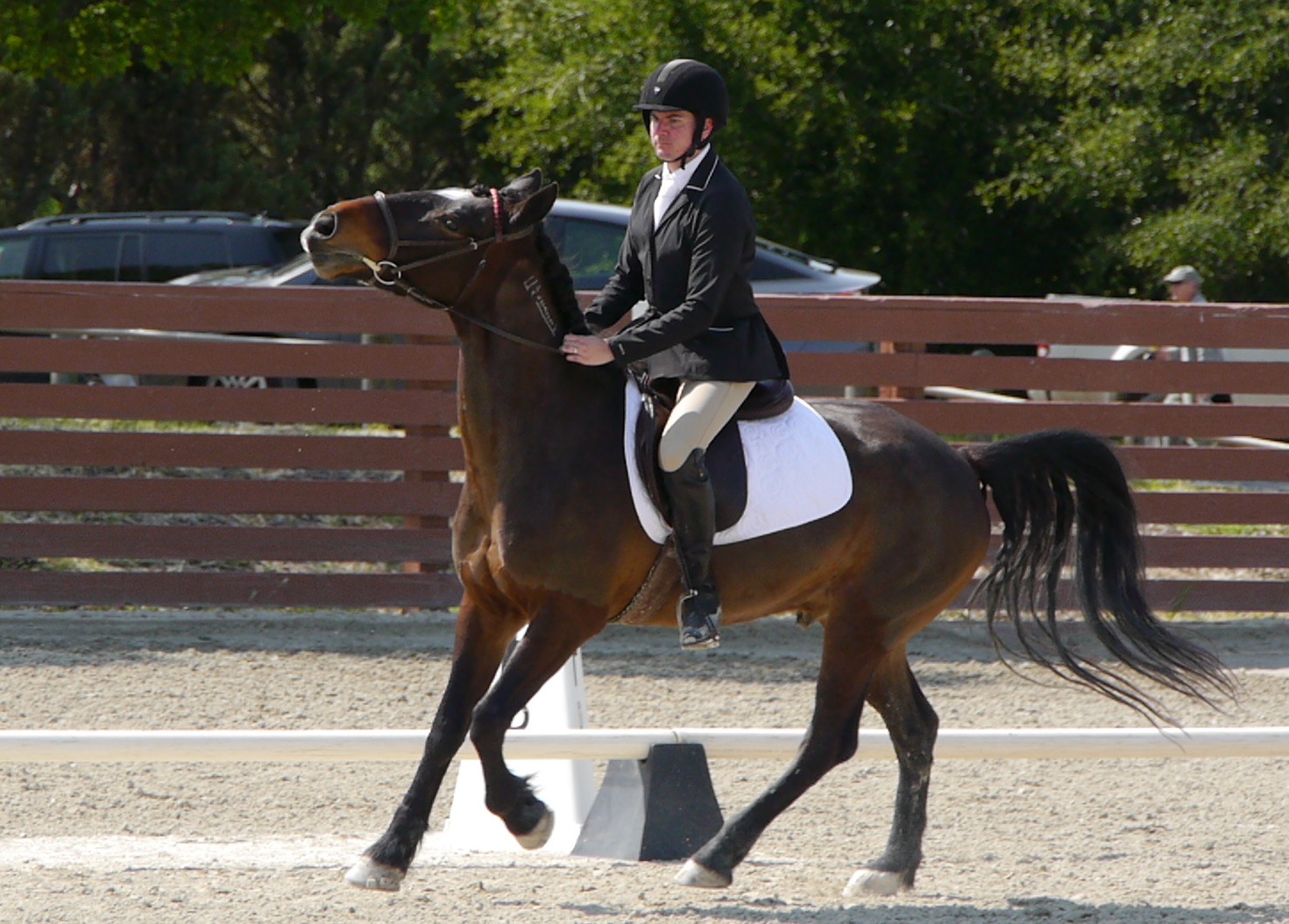 No free walk was in evidence, but they scored another 8 for their halt and a final score of 64.75%. This earned him 1st out of 3 for the class and a prize. The prize was initially a polo shirt, but apparently they only had women’s polos so I traded it in for a hat.

This post has gotten rather long so I’m going to do a separate post about the hunter derby. Stay tuned!