My husband’s adventures at the show this weekend were much more interesting than mine, but I need more time to go through all the pictures to write his story up, so you get Levi’s and my adventure first.

I had signed up for Intro A and C in advance and figured I’d add some hunter rounds once I got to the show and knew what the schedule was looking like. Since they run 4 rings and there were 2 of us competing, I didn’t want to sign up for something that would conflict. Once we got there and went to sign in, I added the trot poles division, which was scheduled to start at 10:15.

My husband was doing the first jumper division and Levi was left alone at the trailer to scream his head off until we got back. Then we tacked him up, I changed clothes, and we headed over to the arena. Levi was the quintessential kite. We had multiple discussions about not running me over, not jigging in place, not running past me, not stepping on me, and just not freaking the hell out. I went over to check the course and the schedule and then had my husband hold Levi while I got on because he was still a nut. 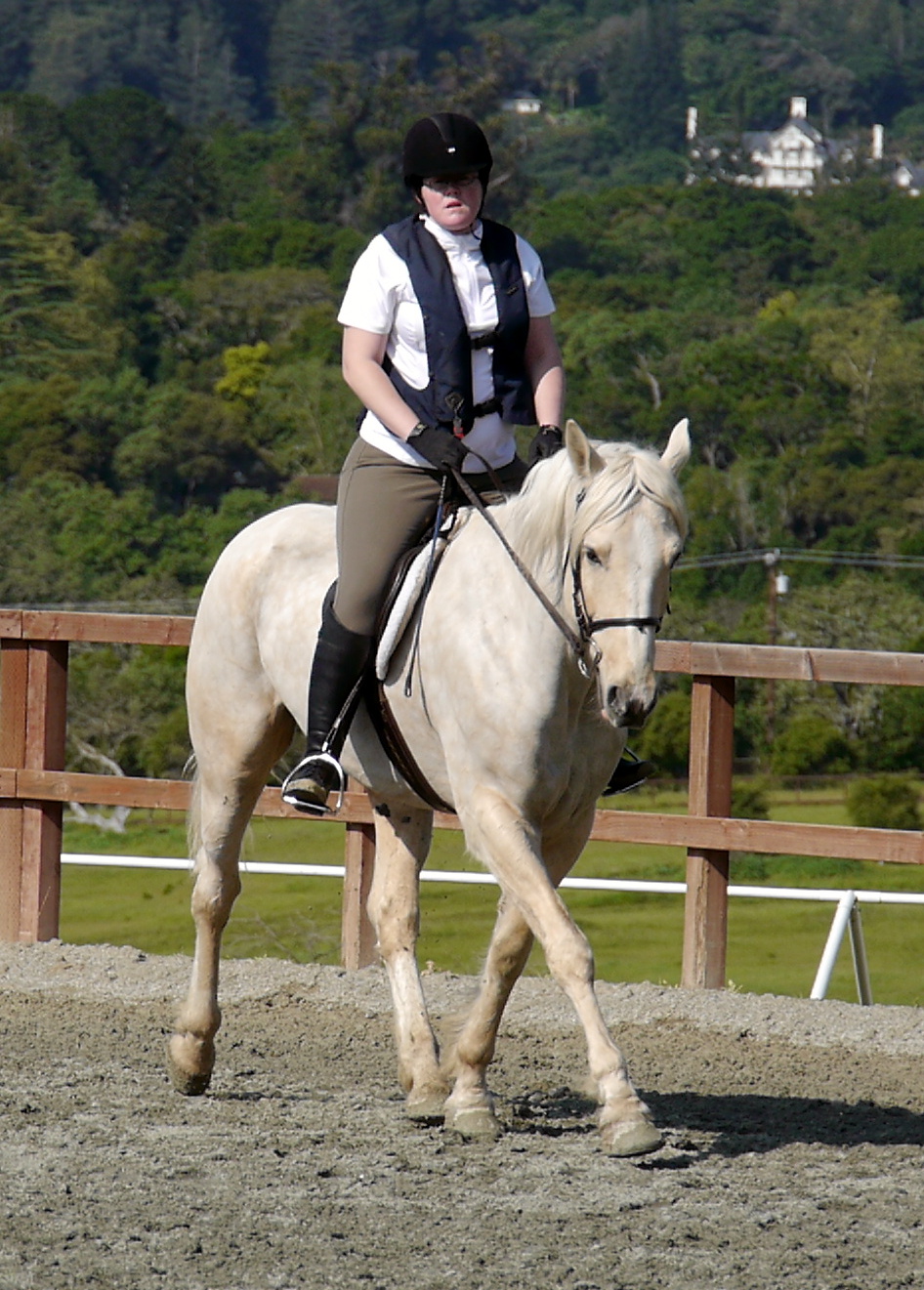 I did the warm-up with my vest on because he was really quite upset, but he settled down pretty quickly. Soon they were calling for the class to start and I wandered over. No one was there. I asked how many people were signed up and the girl said 6. The course was literally outside line to outside line and then repeat so it’s not like I needed much time to memorize it. I swapped out the vest for my jacket and volunteered to go first.

Levi balked at the first pole – conveniently located right in front of the judge’s booth – and I thought he might actually stop so I pony club kicked him over it. After that, he marched around alternating between jumping the poles and fancy prancing over them. 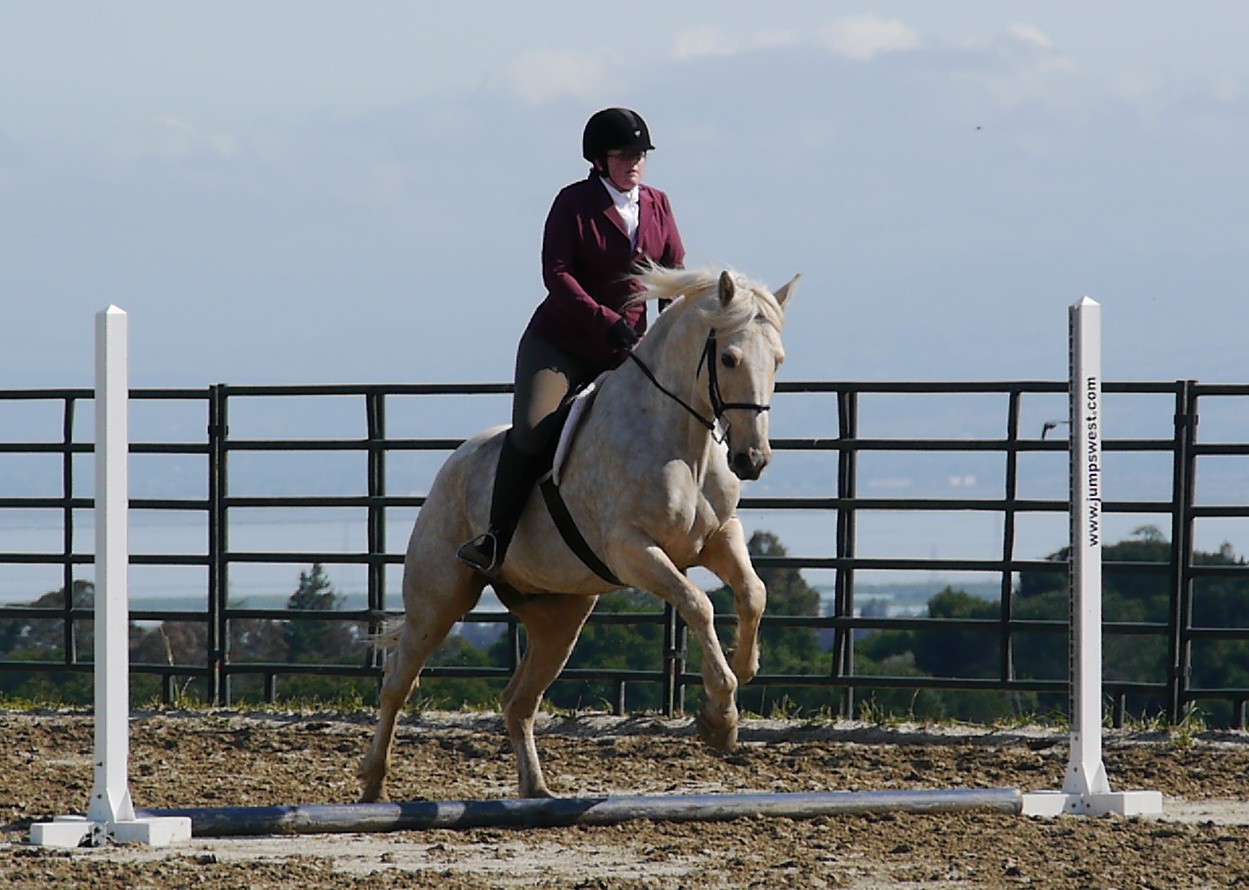 Poor boy really does not understand how his feet work. And while I would say this apparent desire to not touch the poles would be a good sign for his future as a jumper, he generally knocks the crap out of poles and jumps. He really just does not seem to understand where his feet are in relationship to objects. 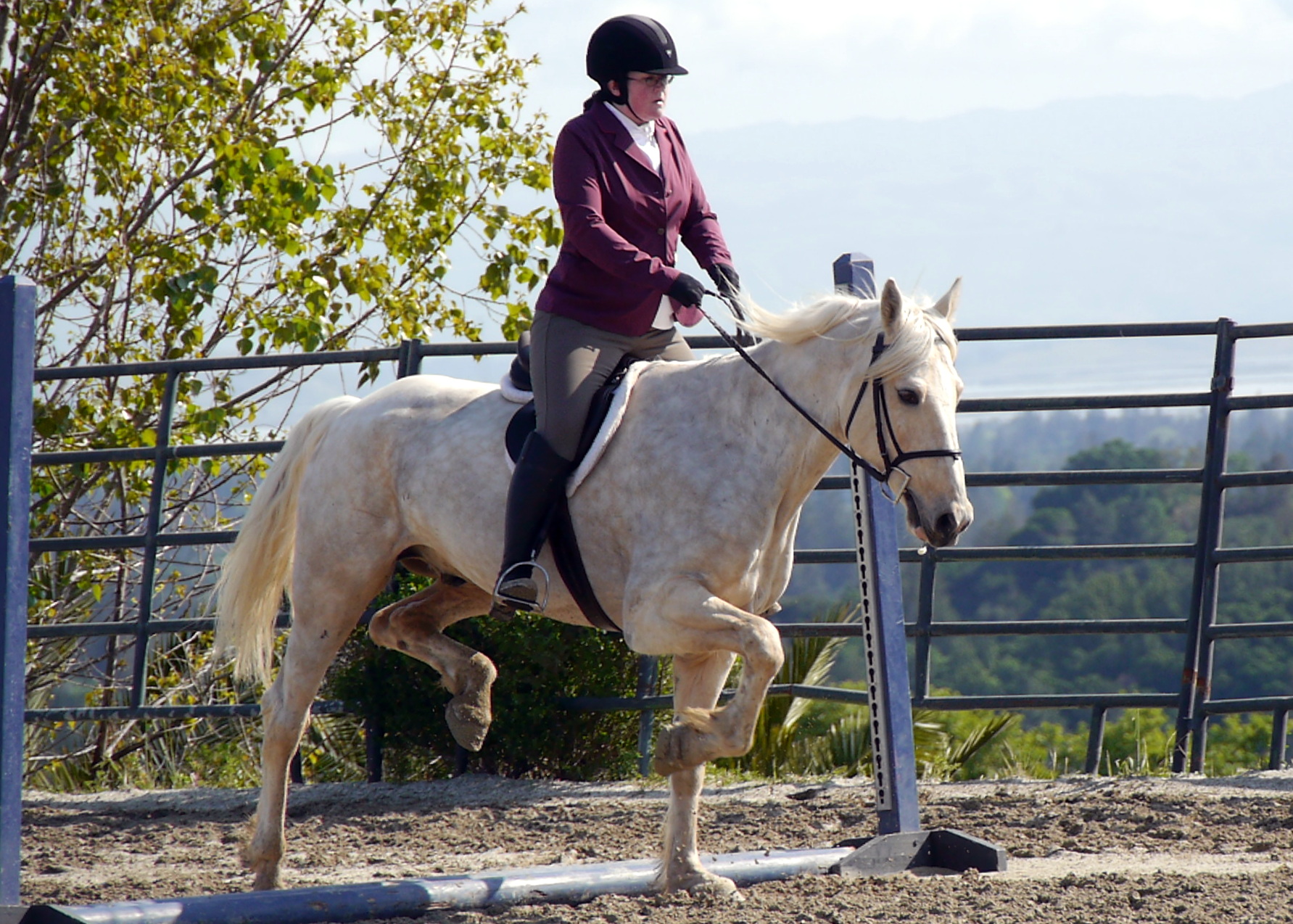 We exited the ring and there was still NO ONE else there so I volunteered to go right back in for my equitation round. 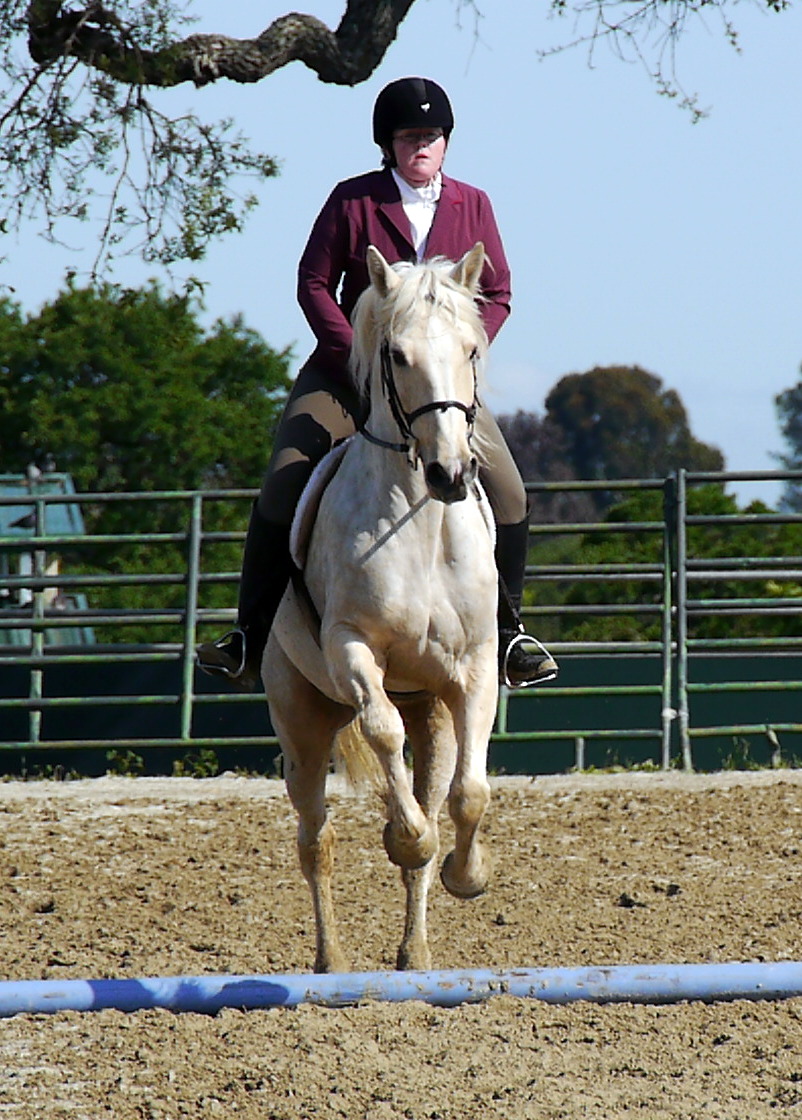 When I finished, there was still no one else there for my division and my husband had dressage coming up, so I confirmed that I could leave and come back later to pick up my ribbons. With only 6 entries, I figured I could at least collect some 6th place ribbons. I came back at 11:15 on my way to watch my husband do his 11:30 dressage test and they were just then announcing the placings. Seriously. It took them over an hour to go through 12 rounds. I am just not cut out for hunter land.

I actually ended up getting 3rd in hunters and 4th in Eq. I learned from Kate later that at least one horse refused at the first 2 poles, so I guess that’s at least how I beat one other entrant. Since I didn’t see the rest of the rounds I have no idea how I managed 3rd and 4th, but it was nice to finally win a ribbon that wasn’t just last place.

My first dressage test was supposed to be at 2:31, so Levi had a bit of a break. When we went over to warm up, the dressage arena was on break so I was able to warm up by walking around the outside of the arena and let Levi see the scary judge’s booth and around near the stands. He was actually really good about it. The judge came out and asked if I needed a human to come into the judge’s booth and I said no, he was being really good. 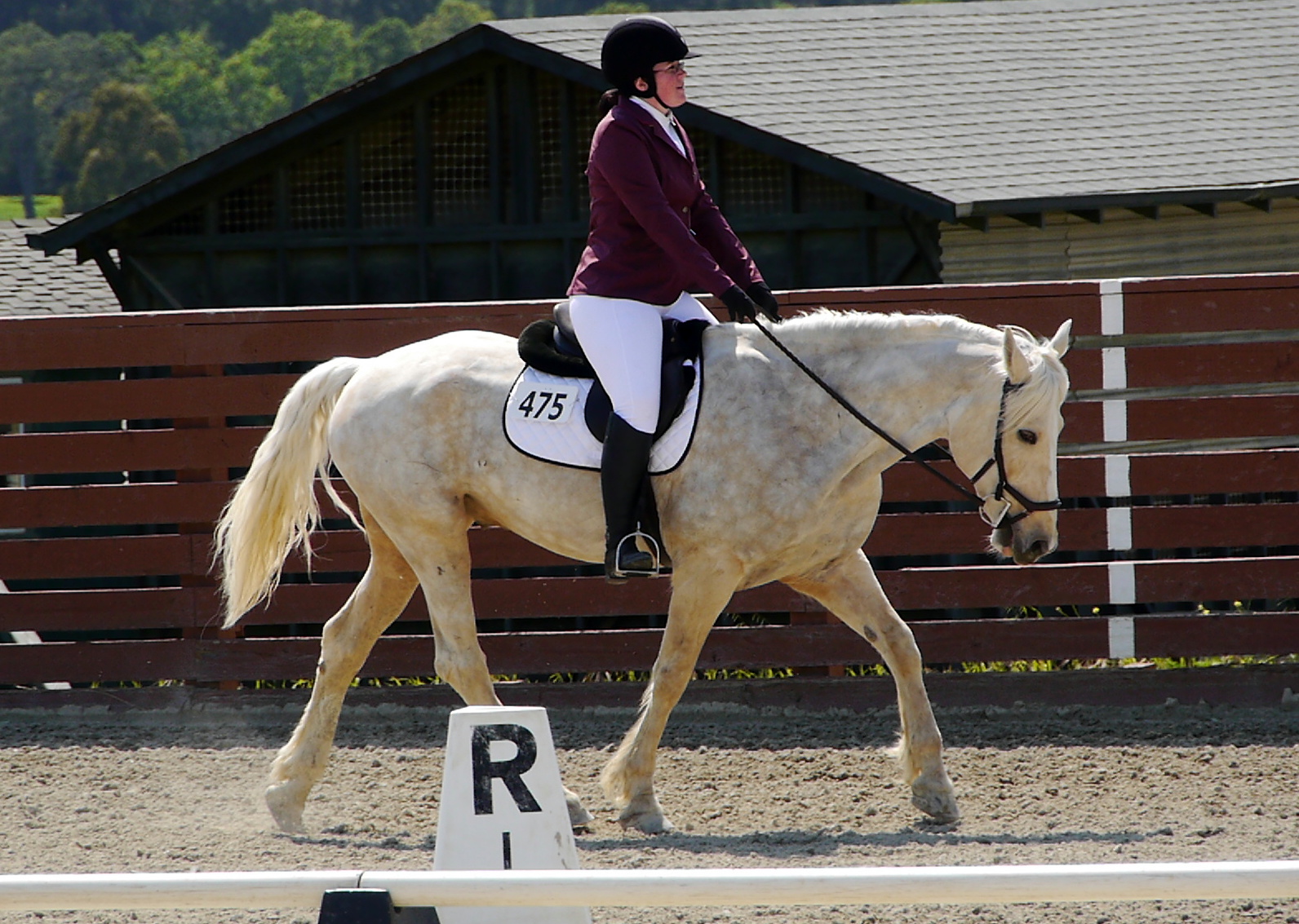 That is one thing I really like about this show for a schooling show. The judges are very understanding of green horses and will help if they can. I ended up seeing Megan there as well and she was also really glad the judges were being so nice, but I won’t say more about her tests since I’m sure she’ll do her own post.

Intro A is so painfully easy. It’s actually a little annoying as it’s so short and you spend like 1/3 of it walking. But it is a great first test for a horse who has never done a dressage test before. Levi was very good for it. They had some cancellations and asked if I would go early. I was fine with that, but I told them I was waiting for Megan and my husband to come back. As soon as they got back, we went in, walked past the judges, they asked if I was ready and we were rung in. 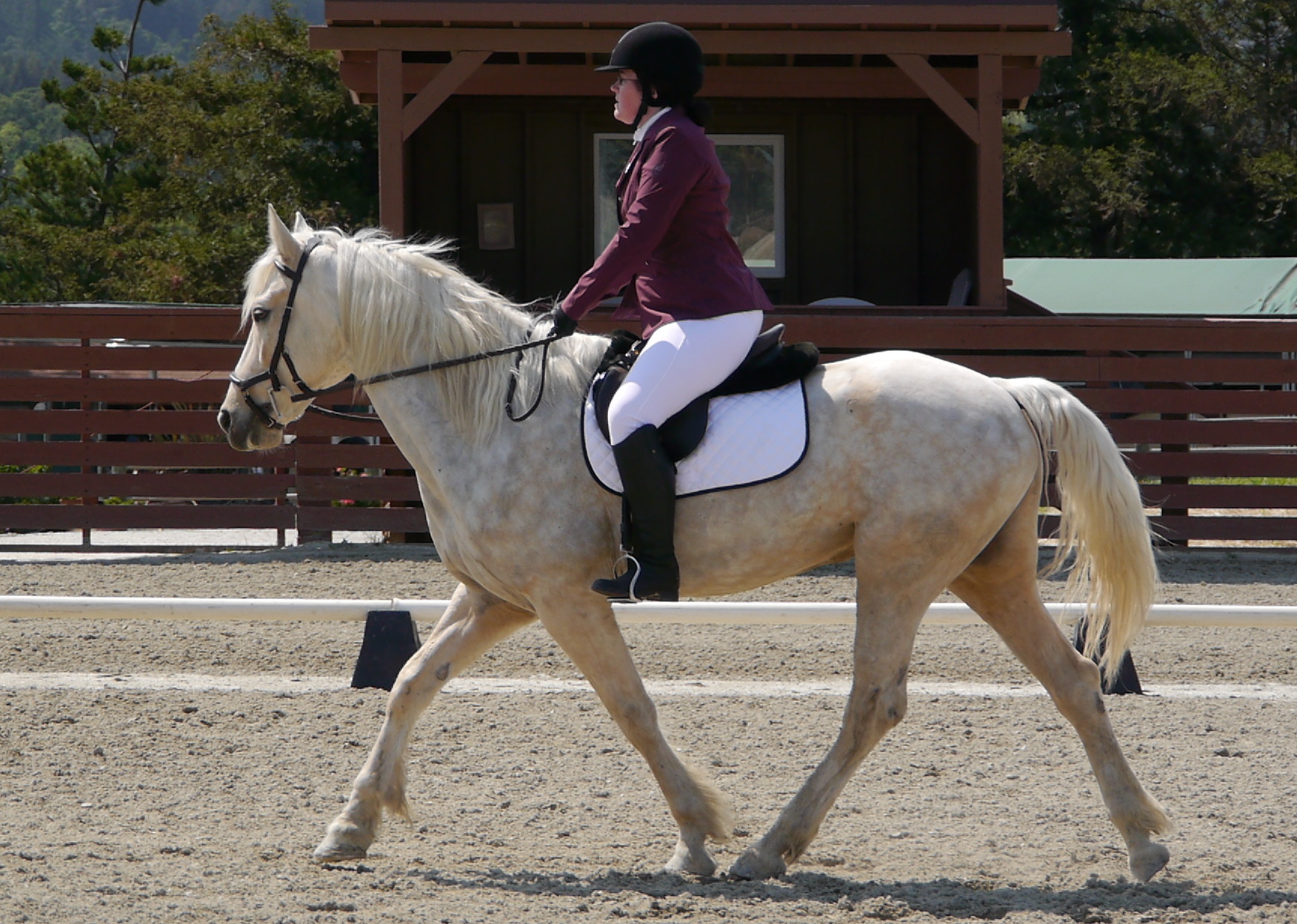 I know it’s just intro A, but I was very impressed with Levi. Not only was it his first dressage test, but I have never actually done this test at all. We’ve never practiced any dressage tests at home or even ever had a dressage lesson. He wasn’t perfect, but he went in there and did his job. No spooking, no attitude, just a well behaved pony. 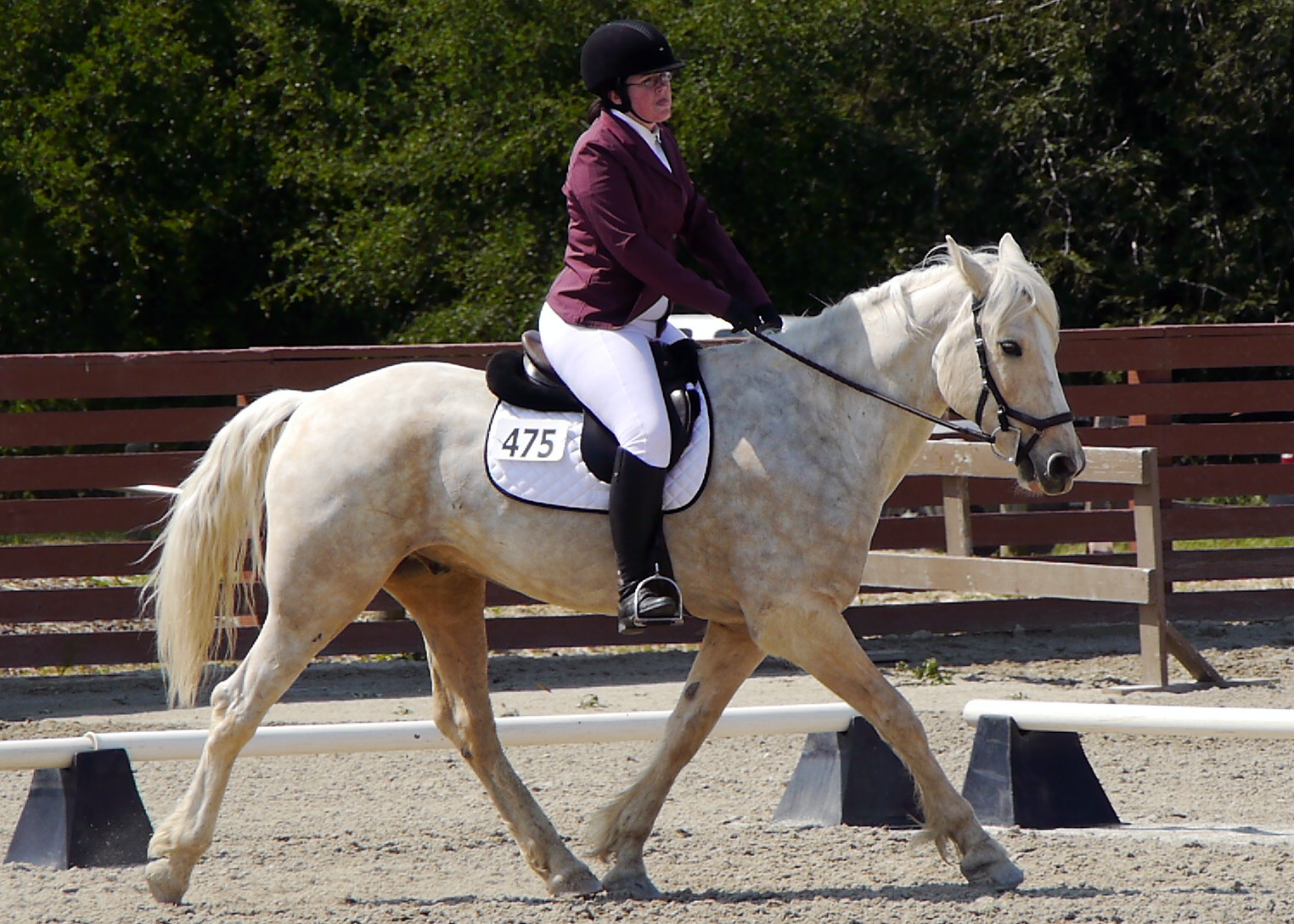 We got a few comments about my lack of ability to do circles, which is – sadly – not a new comment for me. We did manage all 6 – 7s for a final score of 65%, which I will certainly take for his first test. 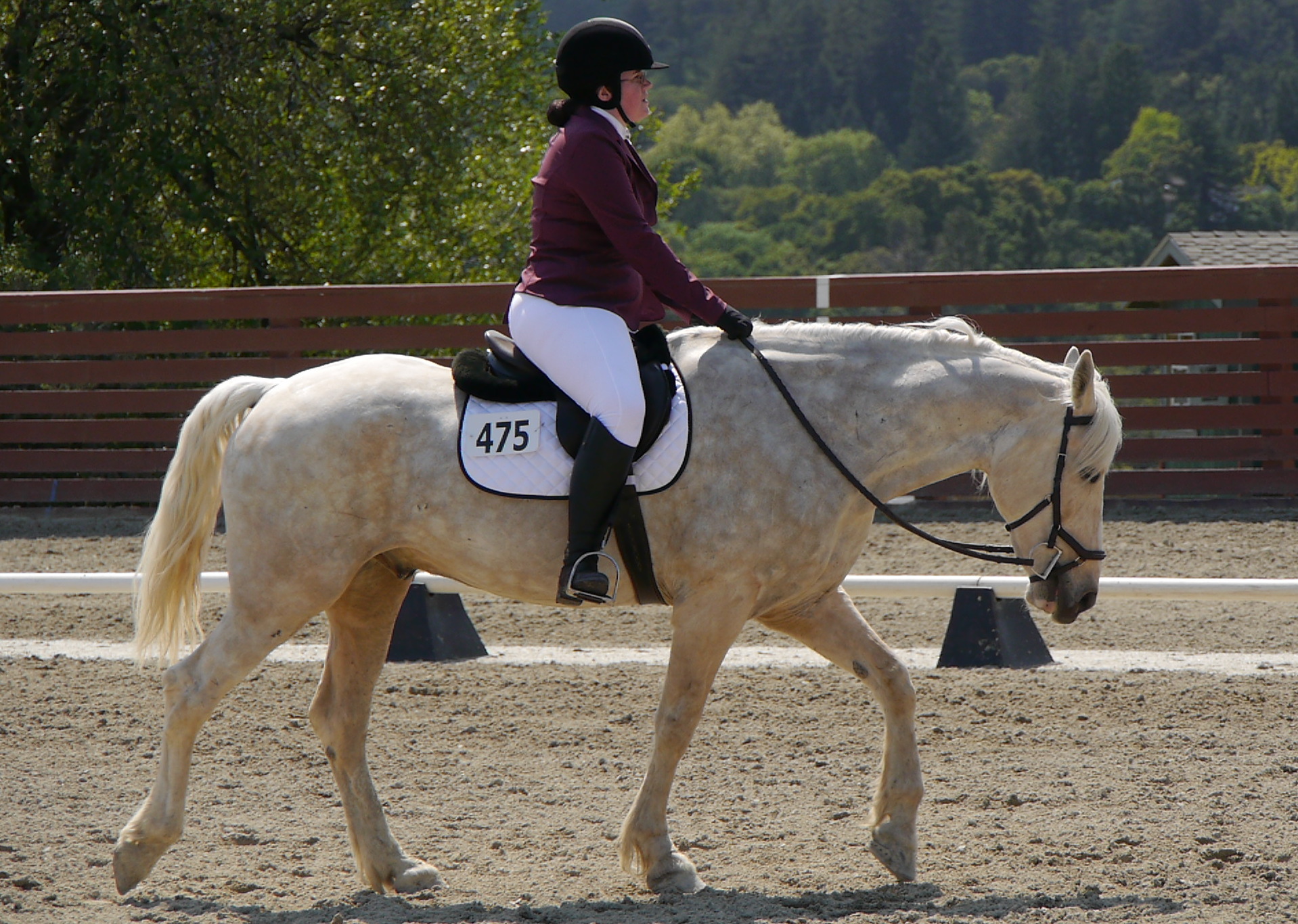 I was actually really happy with this free walk. We have literally never practiced free walk – ever – so this was just so nice to me. If you look, you can see that I’m sneaking in a neck scratch because I was so happy with him. We got a 6.5 for this and the comment “could stretch down and forward more.” Whatever judge. I’m super happy with him.

Because of the scratches, they told me I could go back in for C whenever I was ready. I was like, well, I haven’t cantered him since Monday so maybe you can give me a few minutes. My husband had gone off to get Eugene tacked up (also doing Intro C) so Megan and Kate had to take over photography. I took Levi off and cantered him a few times and then said I’d go in. I really should have had a crop and gotten after him about cantering. He was being sticky about them. He usually is for the first few canters. After I get after him, he behaves for the rest of the ride, but I really didn’t get after him here. 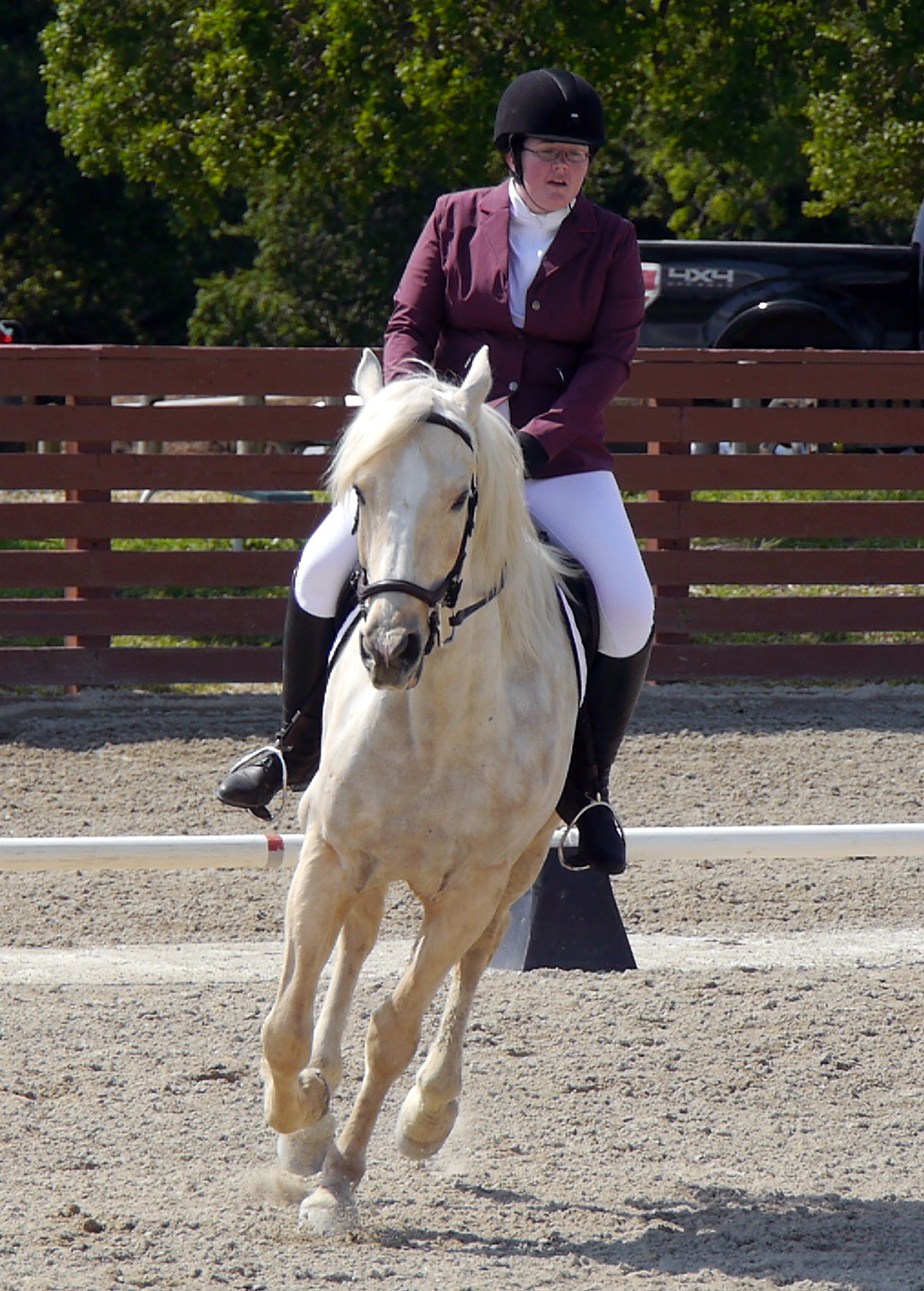 We were once again not so good at the whole circle thing and then canter was a hot mess. I didn’t think Levi was ready for training, but I think it would have been a better test. Training’s objectives ask for more connection and bend, but at least the test is designed better. Intro C has you start cantering between A and K and then must come back to trot before A again. So you get like 4 strides of canter (especially if you’re me and you totally can’t steer around a circle. 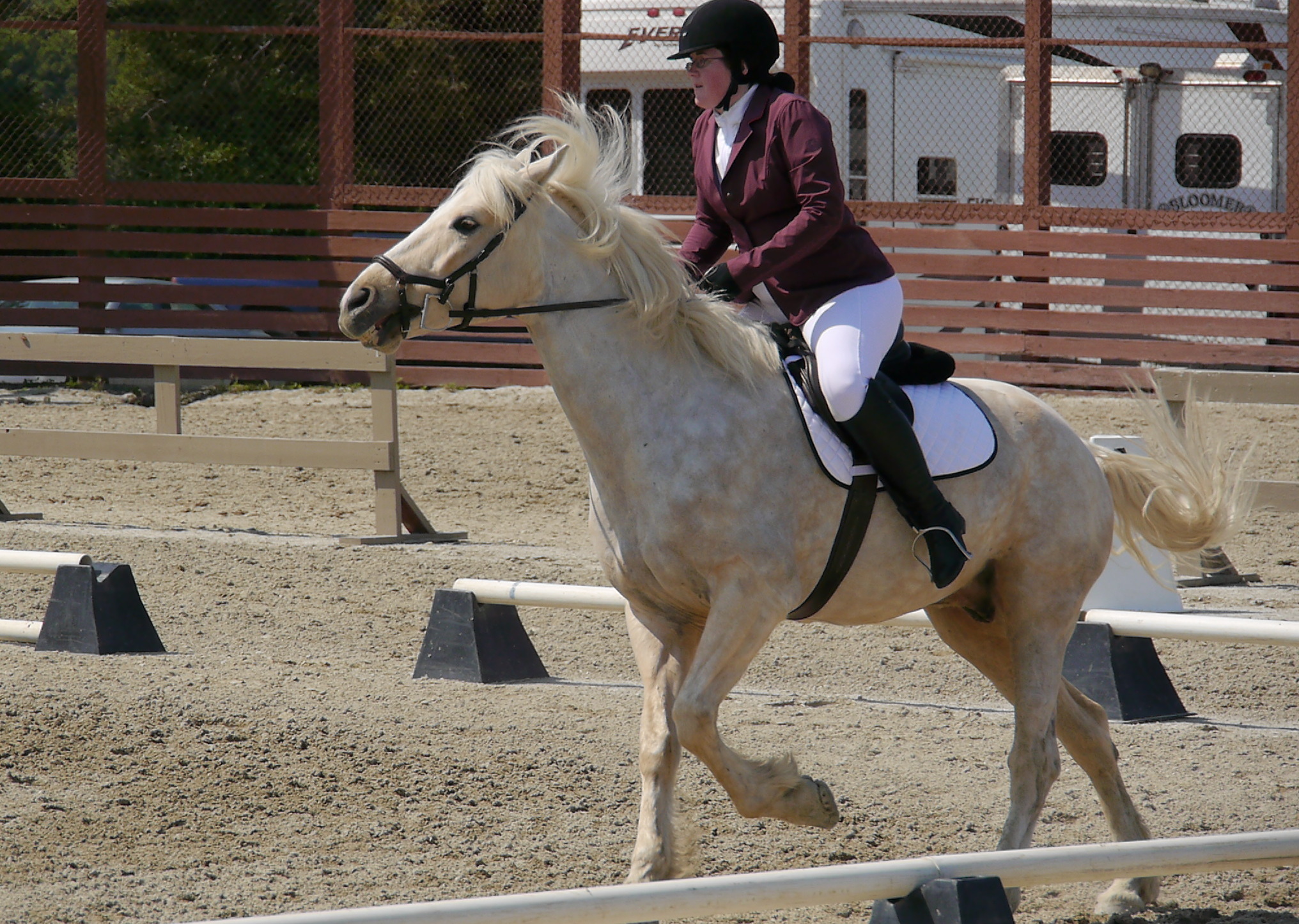 You also get this amazing llama impersonation if your horse doesn’t want to canter and you end up pony-club kicking him into it at the last moment.

Of course, once we had cantered, Levi thought we should canter everything going forward and proceeded to break into canter a few times when he should have been trotting. The comment for our final movement was “broke twice to canter, but fairly straight.” Thanks judge for the little pick me up comment. 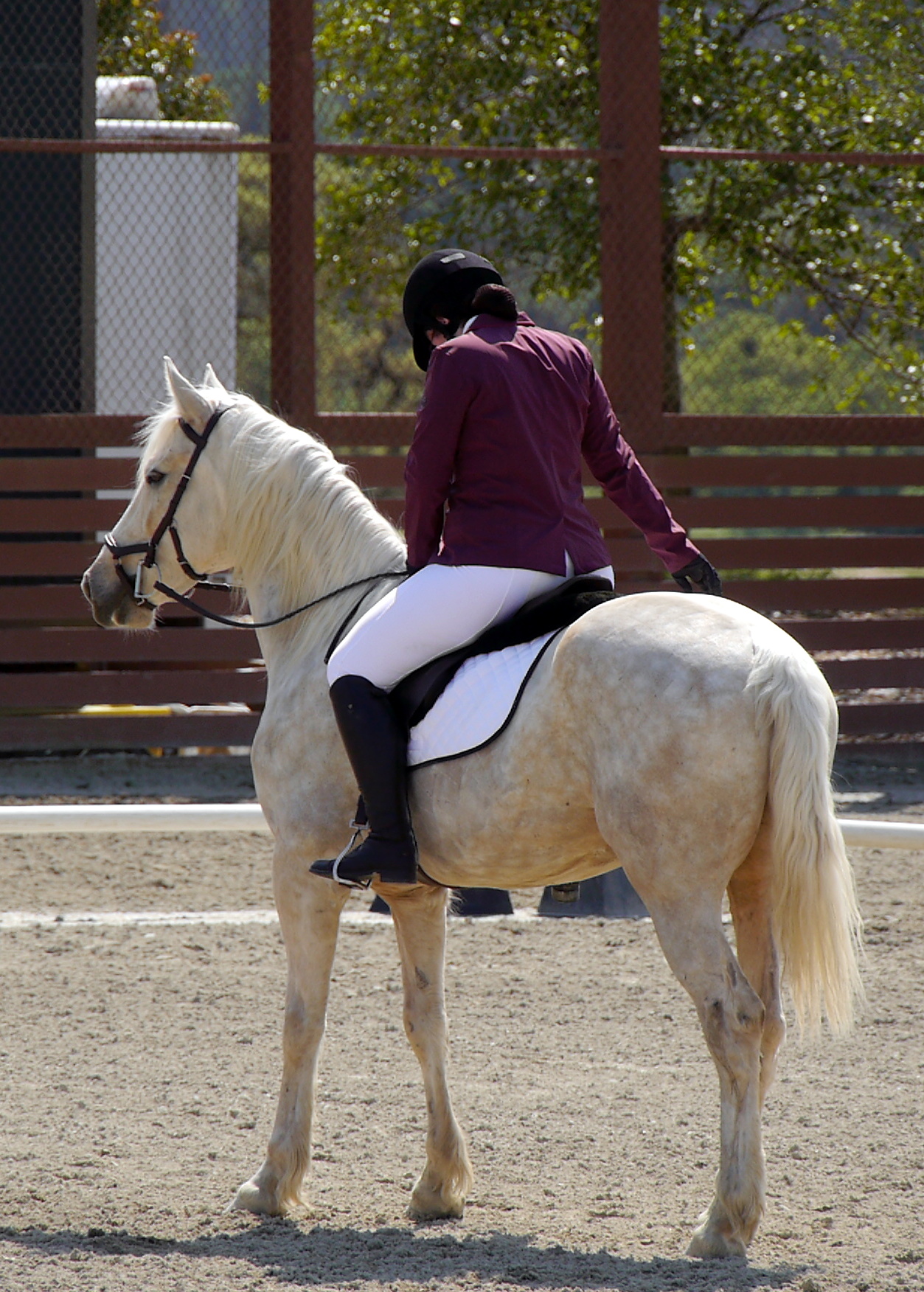 We got a sad, but well deserved 56% for this test. We were also 3rd out of 3, but I really don’t care. I was very impressed with Levi. He was a good boy and really tried very hard to be good.