There are a few towns near us with active equestrian communities. Some of them even have trails that wind through town connecting homes and parks and arenas. All of those towns require more money to live in than I will ever have, but they’re nice to visit. Los Altos Hills has a town arena and their Horseman’s Association hosts a variety of events throughout the year including a schooling show. The class list for the show looked like a lot of fun, it was cheap, nearby, and the money went to supporting a good association. Sold! 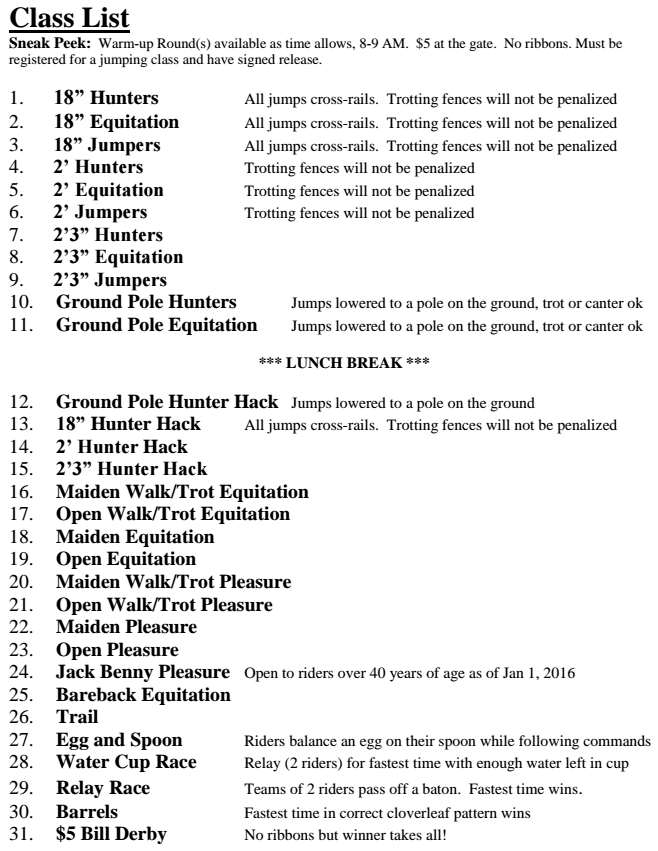 Warm up round were from 8-9 so we got there super early. Eugene certainly needed all the time he could get to practice in the scary arena with jumps and flowers and speakers and judge’s truck with umbrella.

A bonus to arriving early was that we snagged a small pen for the ponies to share and relax in between classes. Nilla ended up using this for a nice nap during the lunch break. 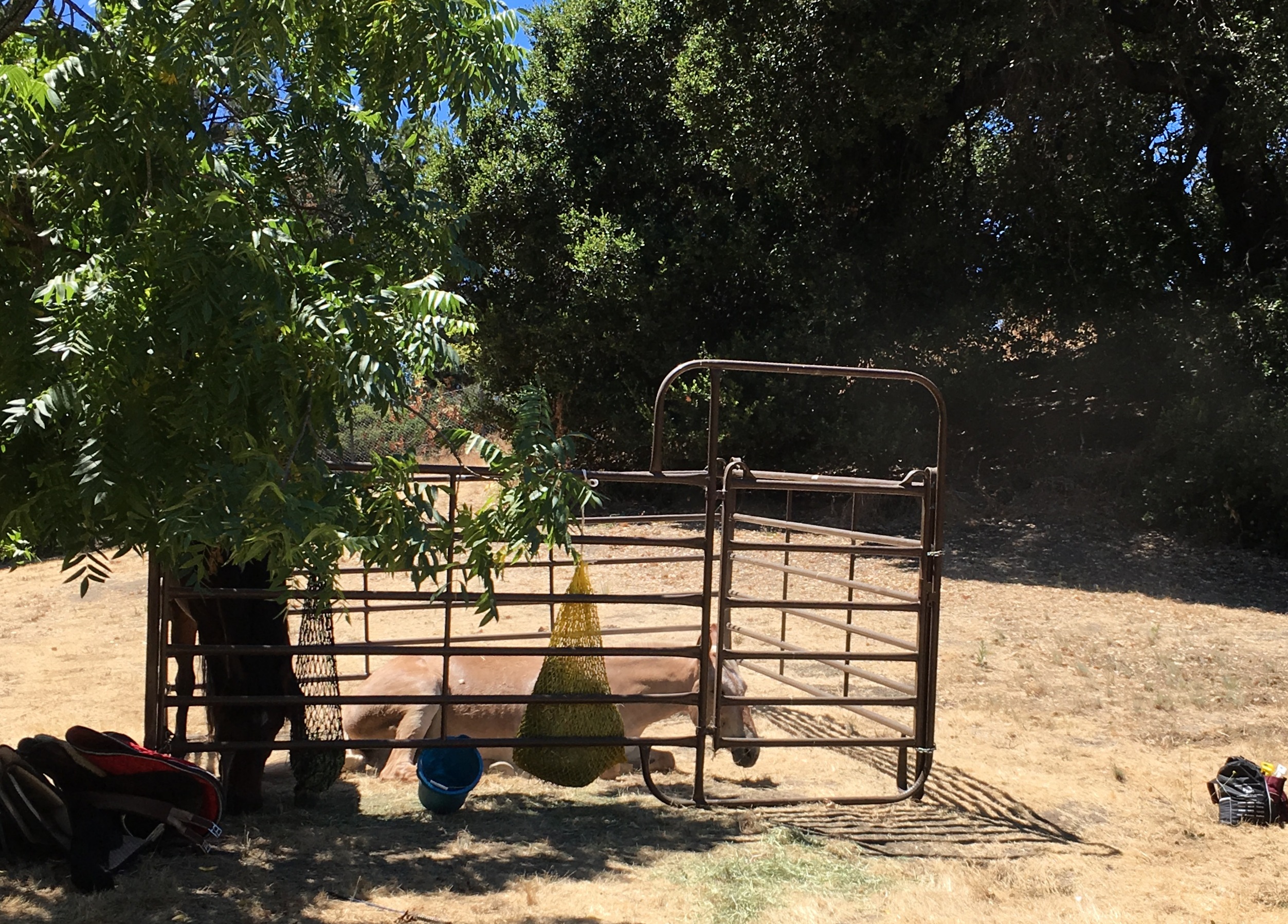 My husband did 18″ Equitation and Jumpers. He didn’t want to do the hunters because Eugene doesn’t move like a hunter. I was like, it’s a schooling show, just do all the classes. And it’s not like Eugene is a good Eq or Jumper either, but whatever. 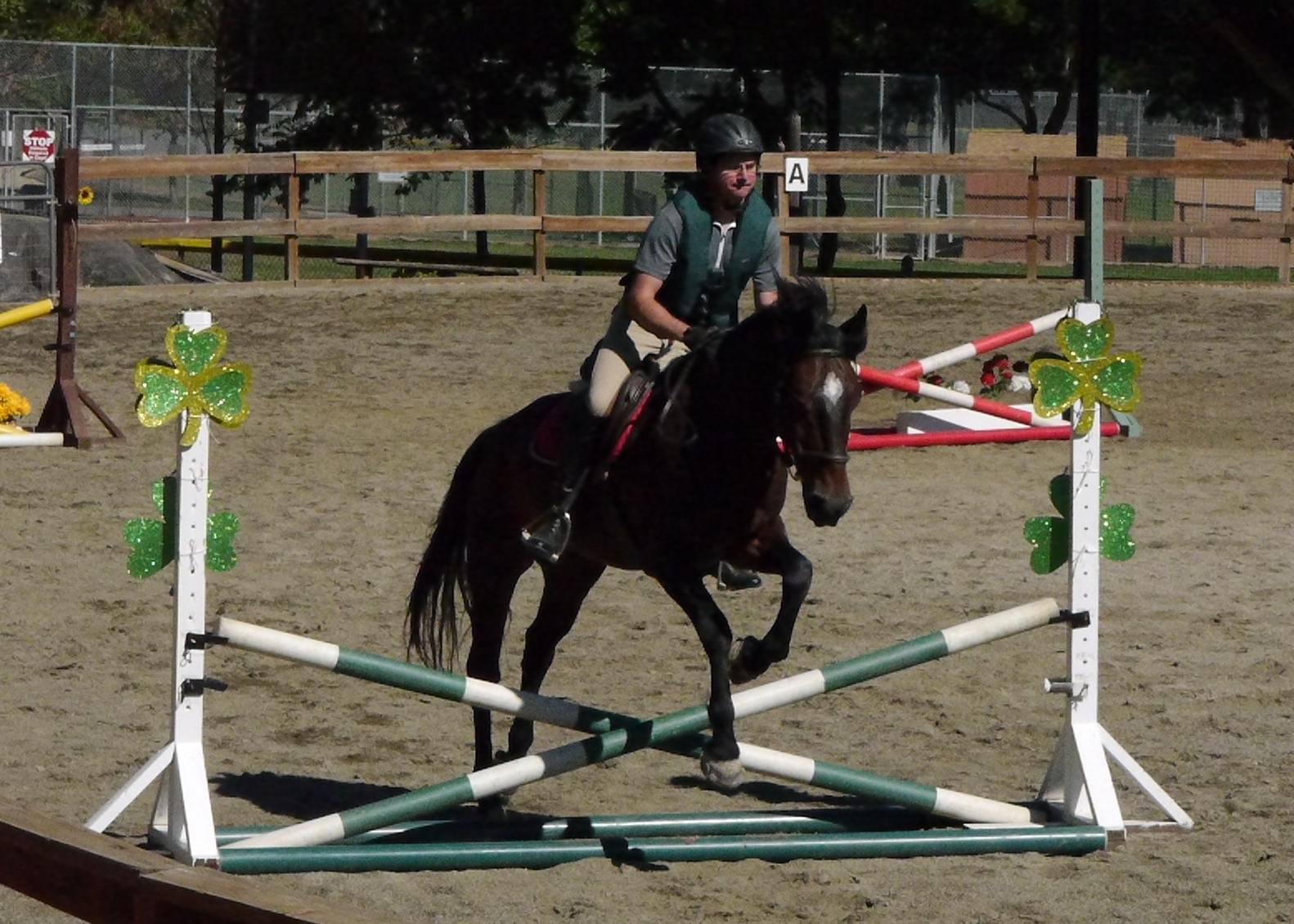 Eugene was such a good boy. They ended up getting 5th in Eq and going clear in Jumpers, which brought them back for the jump off. And they got 2nd for going clear and having the 2nd best time. Such a good little Mustang. 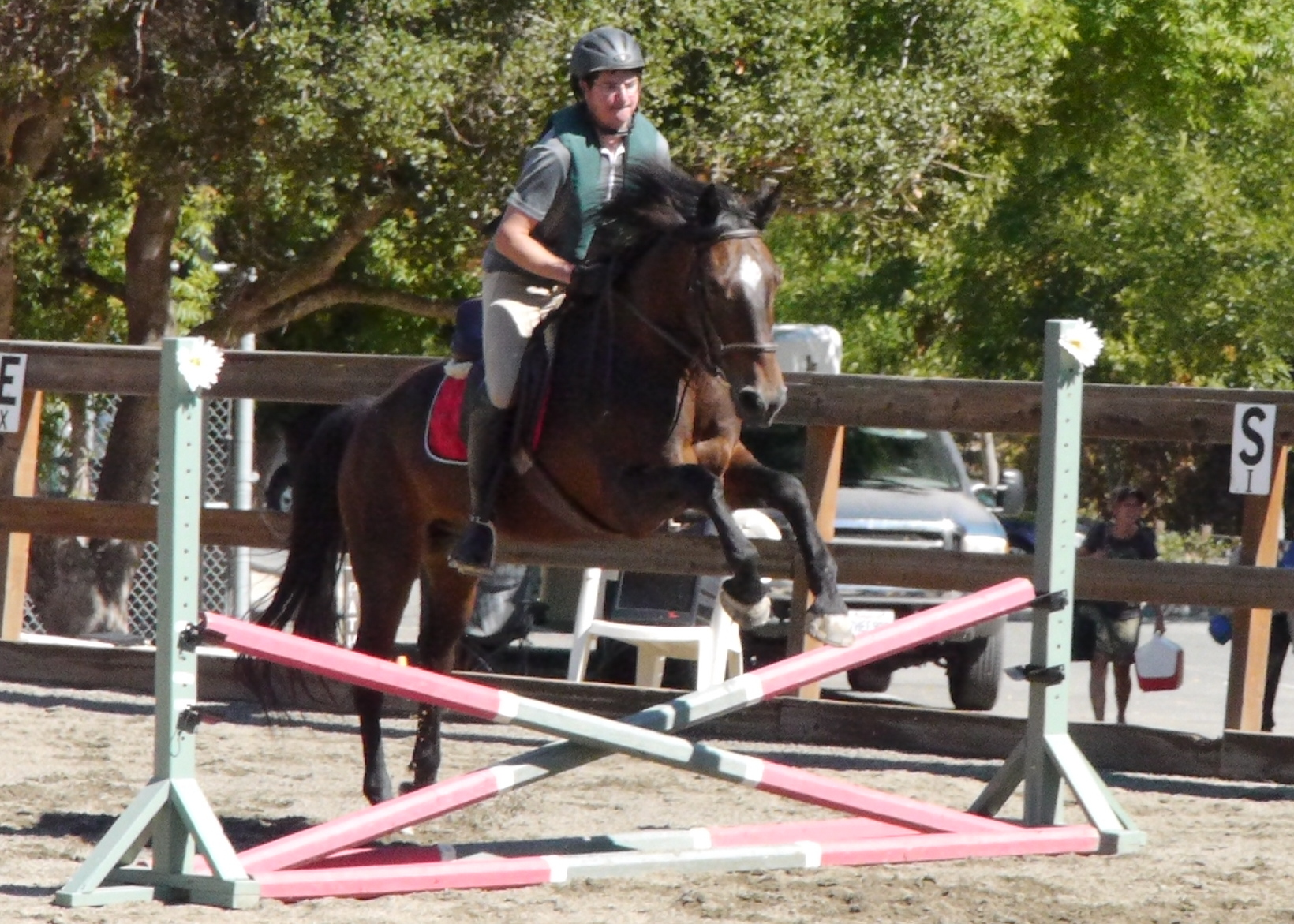 I did the 2′ division and I signed up for Hunters, Eq, and Jumpers. Because why not. During warm up rounds Nilla was on fire: massive over-jumping, “playing” on landing, wanting to race through everything. So, you know, exactly what a judge is looking for in a hunter, right? Ask me if I schooled her for a long time to get some energy out or if I did each jump once and then walked out. 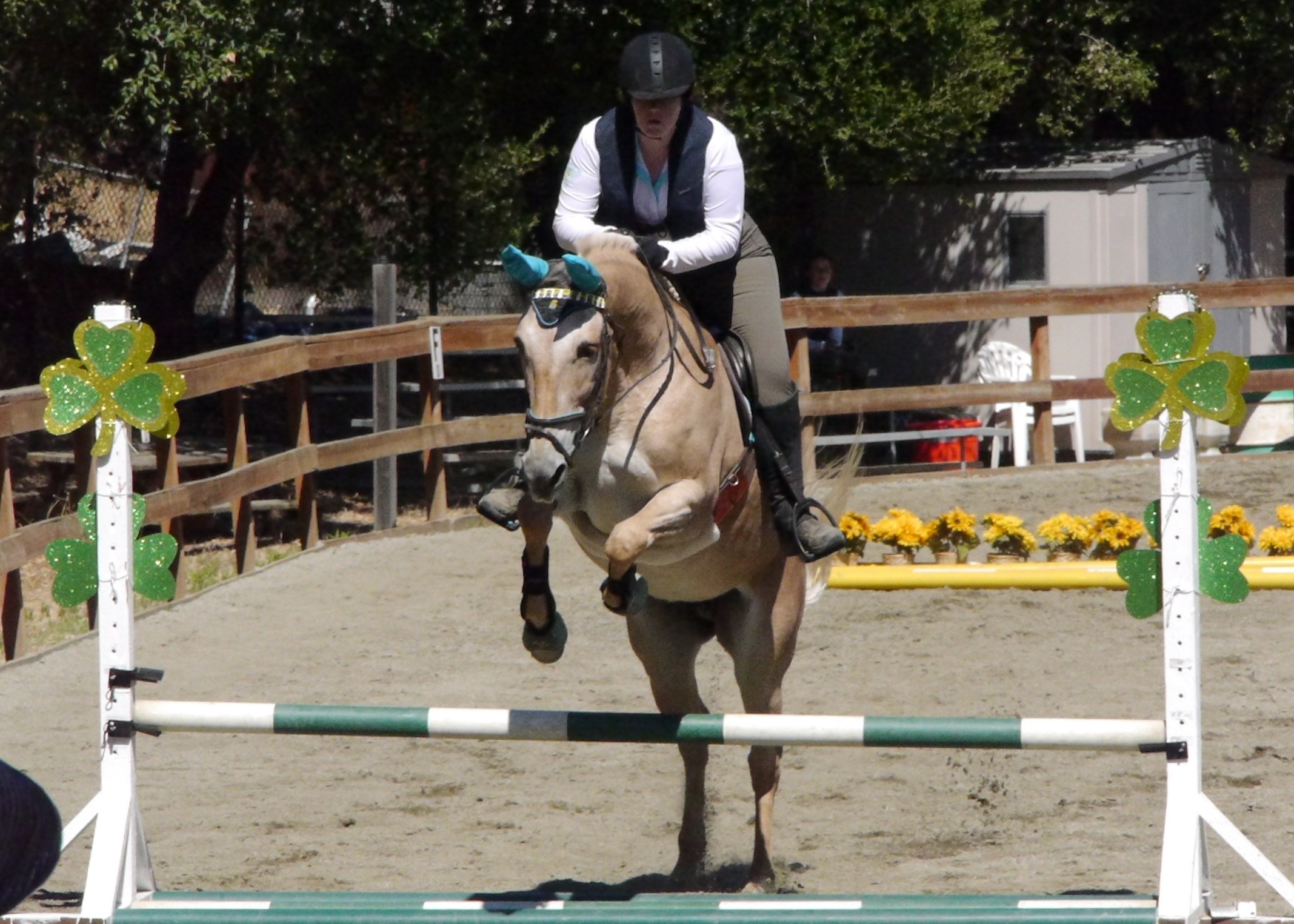 I seriously had thoughts about falling off during that course. We ended up getting 3rd out of 5. Because looking like a psycho jumper race mule in hunters is still better than running out or refusing. Winning!

My eq is questionable on a normal day. Add in massive over-jumping mule that bounces me out of the tack and we were obviously all set up to win the 2′ Equitation class. After the class, one of the other trainers there said she got a great picture of Nilla with her knees up to her nose. Yeah, she’s good at that. It’s just that the jump is like 1′ down there. 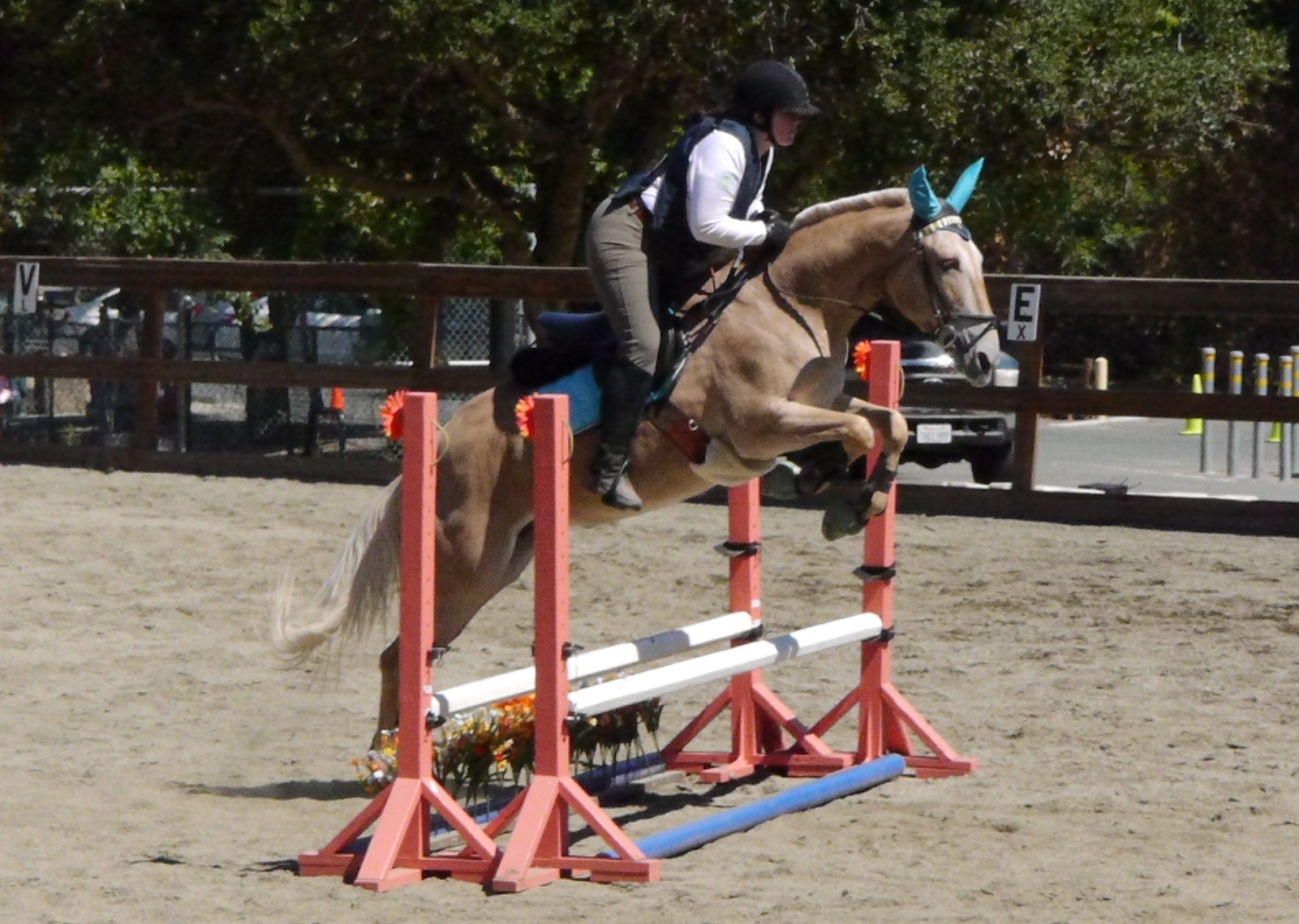 We ended up getting 2nd out of 6th. I’m really not sure how that happened. Like at all. We went on to Jumpers and managed a clear on the first round. Going in to the jump-off Nilla was even more excited. I usually make her trot jumps since she’s not good at picking canter spots. I will let her canter a line sometimes, but jumping is still a work in progress. Coming around to the 3rd jump, Nilla insisted on cantering, I insisted on trotting. I won that argument, but only about a stride from the jump so she wasn’t set up very well and hit the pole. I should have just let her canter. We ended up 4th out of 6 I think. 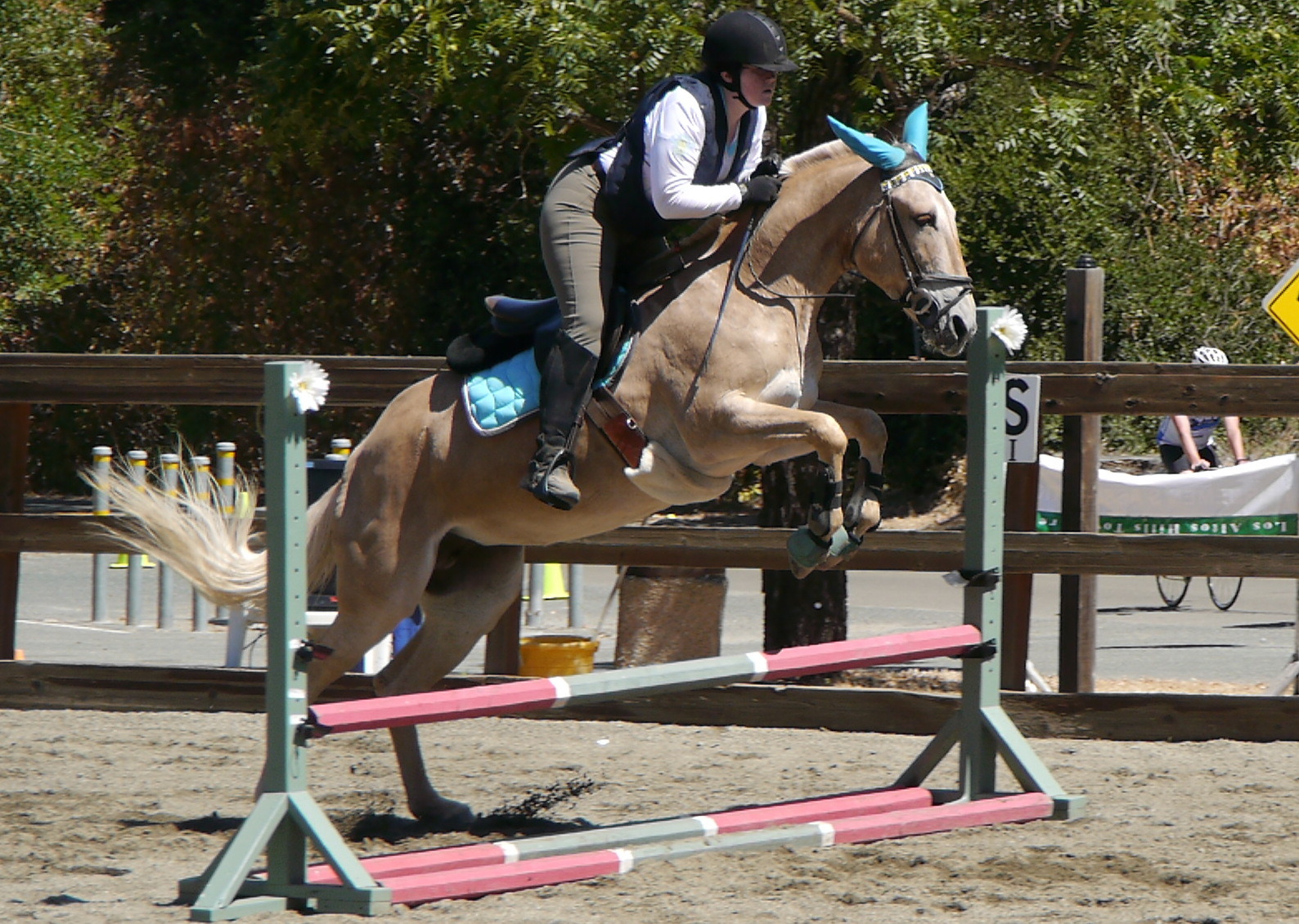 After jumpers, I threw Nilla’s treeless on and my friend who has only ever ridden like 12 times in her life rode Nilla in the W/T Ground Pole Equitation class. I’m going to do a full post on that later because man is that mule amazing (when she’s not trying to kill me).

After lunch, my husband did the 18″ Hunter Hack class. Because I was in the next class, I was busy tacking Nilla up during the flat portion of the class and apparently missed Eugene having an epic tantrum during the canter. Eugene’s never been in the arena with 7 other horses, let alone at a show and certainly not with all of them cantering. It was just too much for his little baby brain. Thankfully, my husband stayed on and they came back to walk shortly after. 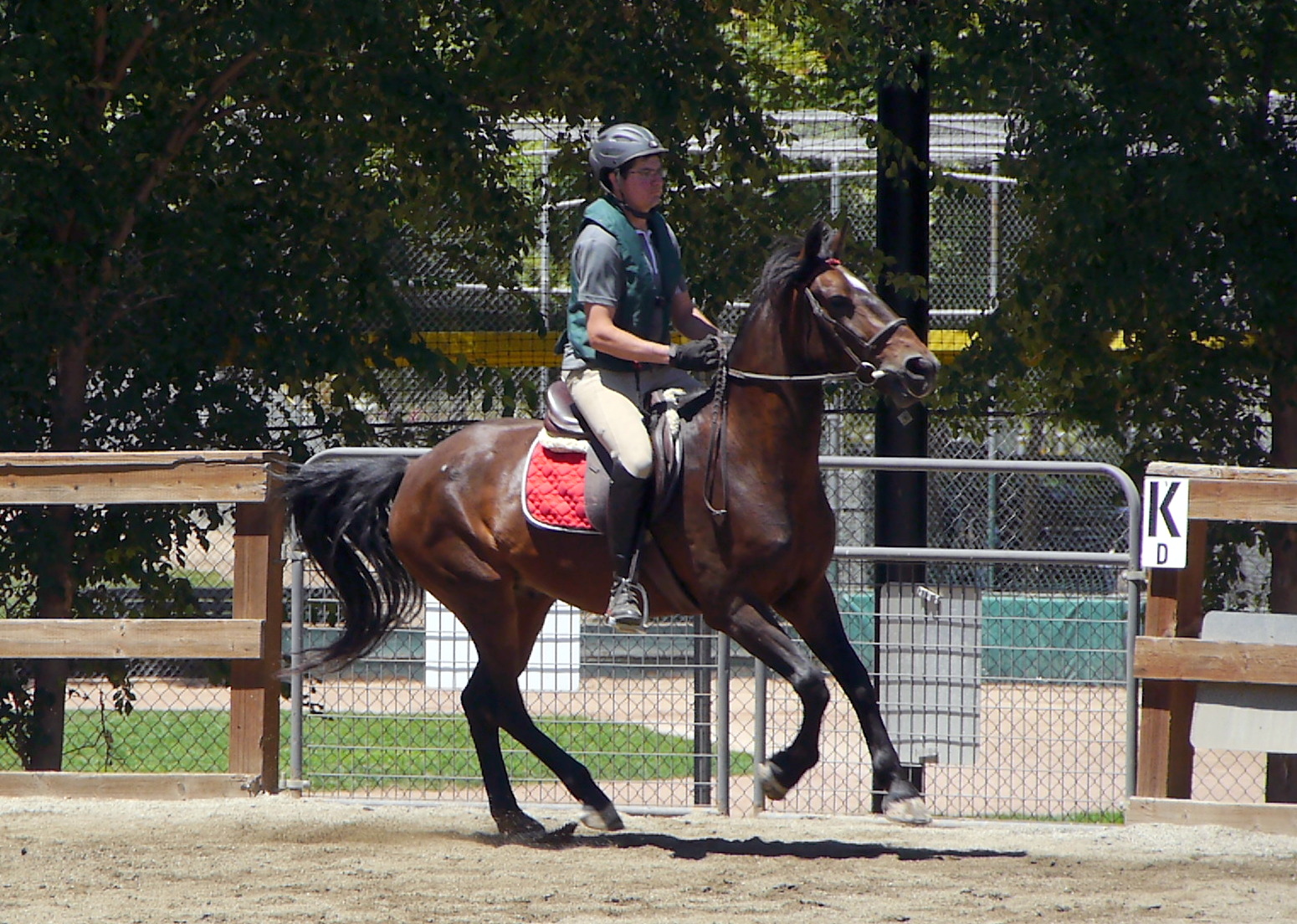 He was a good boy though and stood nicely for the wait while each horse did the two jumps. And then he did his two jumps nicely. They ended up getting 6th out of 8 for the class. 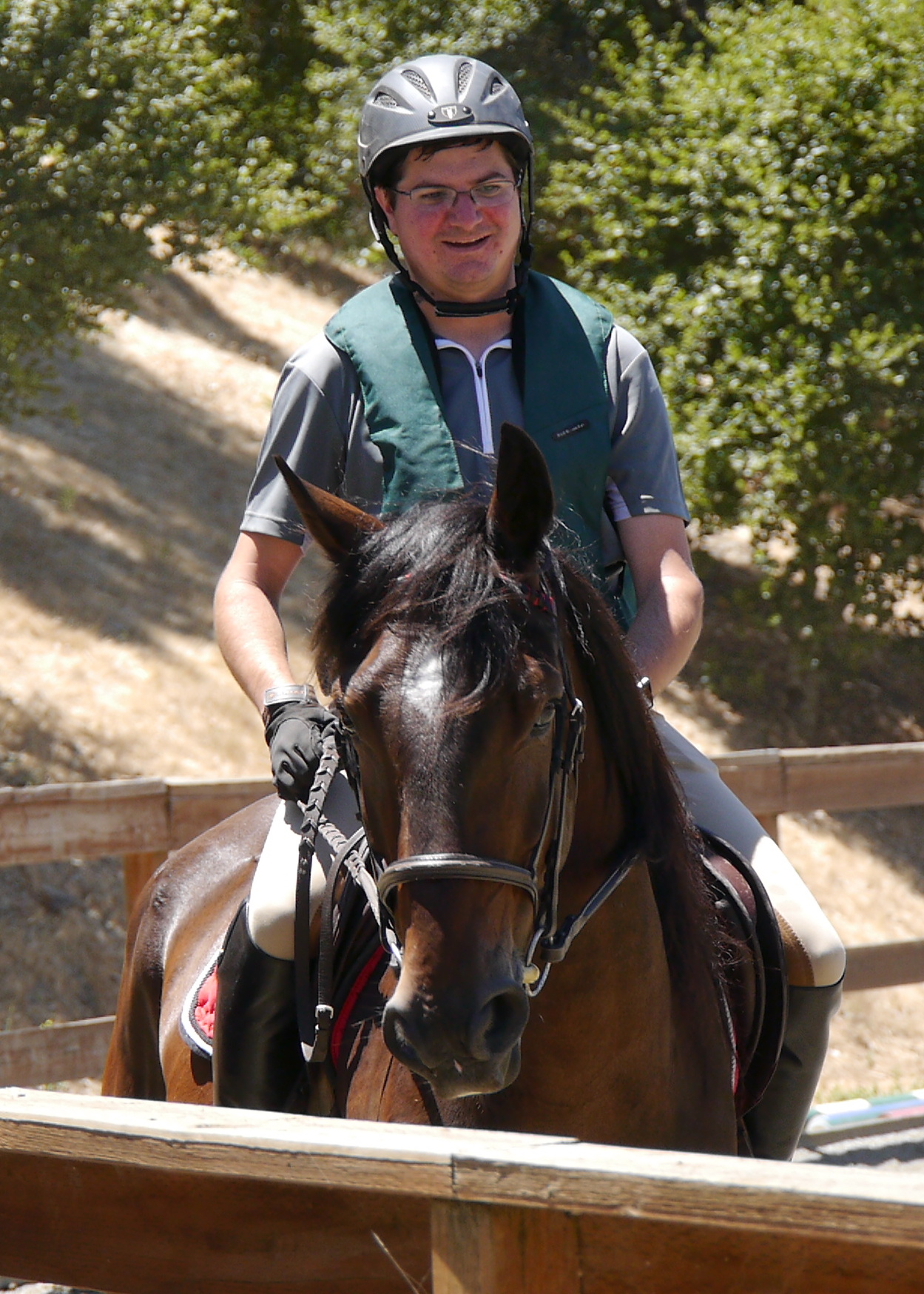 My 2′ Hunter Hack class only had 4 entries. Nilla was very good. We even managed two walk to canter transitions, which are not something I’ve ever schooled. We also cantered multiple times around the ring in a row, which was probably the longest Nilla has ever cantered. I was seriously clucking her on the whole time hoping she wouldn’t break. I thought our jumps were a little squirrelly and enthusiastic, but we still managed a 1st place. My husband said he could over-hear the judge and she really liked all of our very prompt transitions, which probably come from all of our dressage work. 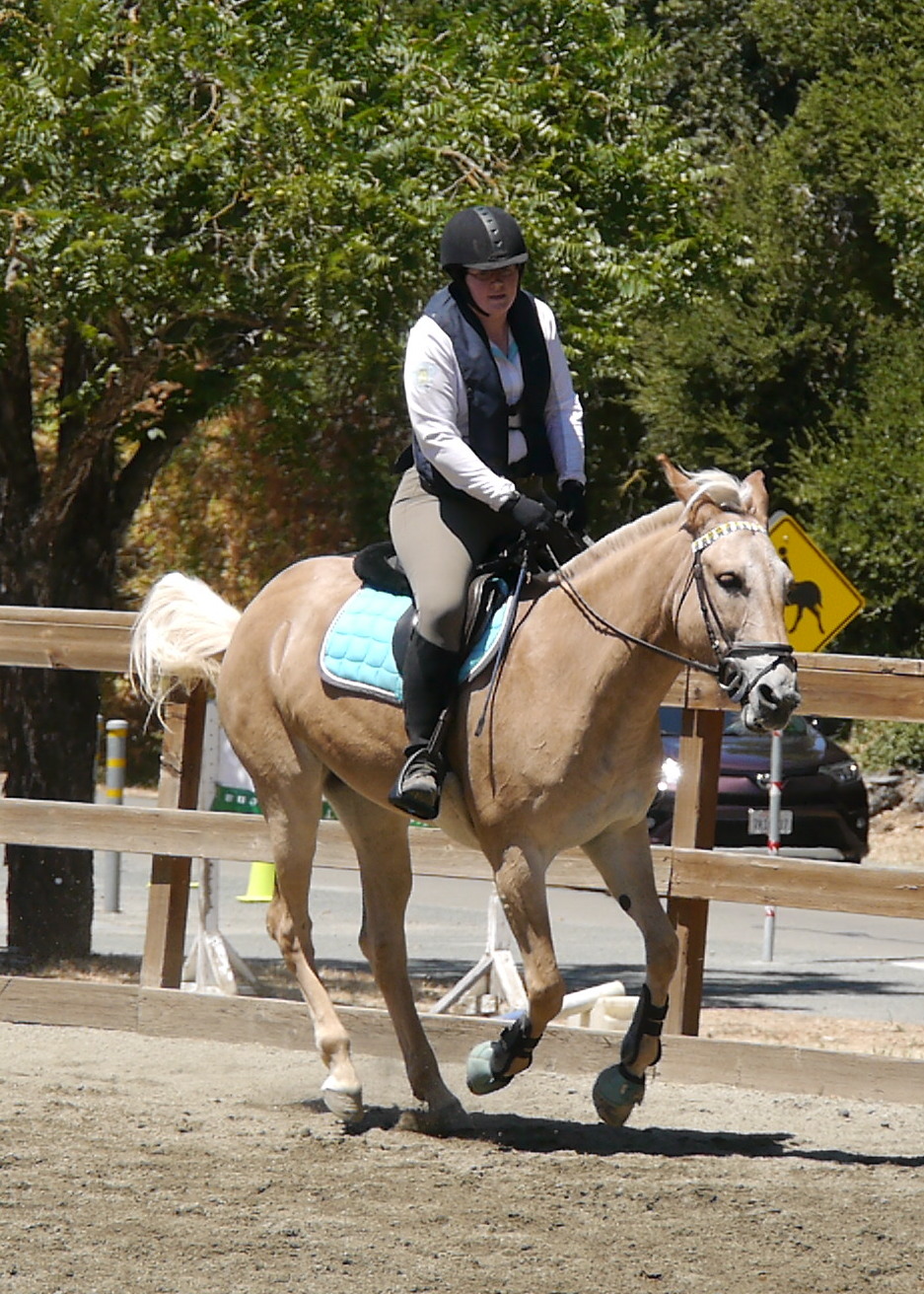 My husband and I both entered the flat Maiden Equitation class and finally did a class together/ against each other. It will come as no surprise that my husband and I are very competitive. Or, at least, I am unnecessarily competitive and he goes along with it. So I was excited to see whihc one of us would beat the other. You can see from this picture that my eq is terrible. And also, wtf is Nilla’s face doing? 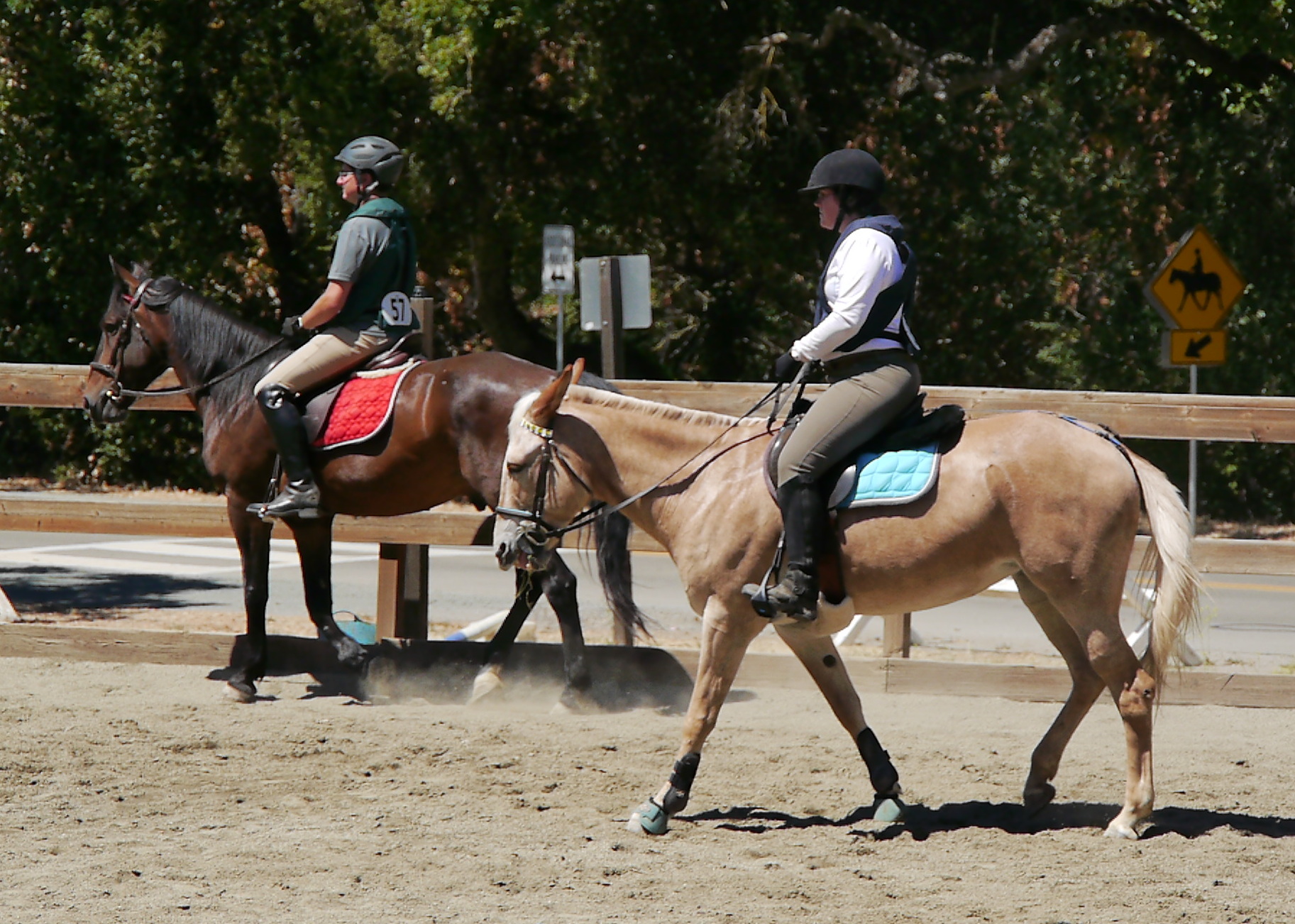 This class was tough. There were walk to canters, which Eugene has never done and then there was a halt to canter. I did jumpers in high school and then one semester of hunters in college before I quit because I hated it, so my hunter experience is limited, but I did not remember ever doing halt-to-canters. Hunter people, feel free to chime in if this is a thing. There was also a back up which Nilla decided would be better if she twisted sideways while doing. Needless to say, I did not win. I ended up tying for 4th (out of 5) and my husband got 3rd. 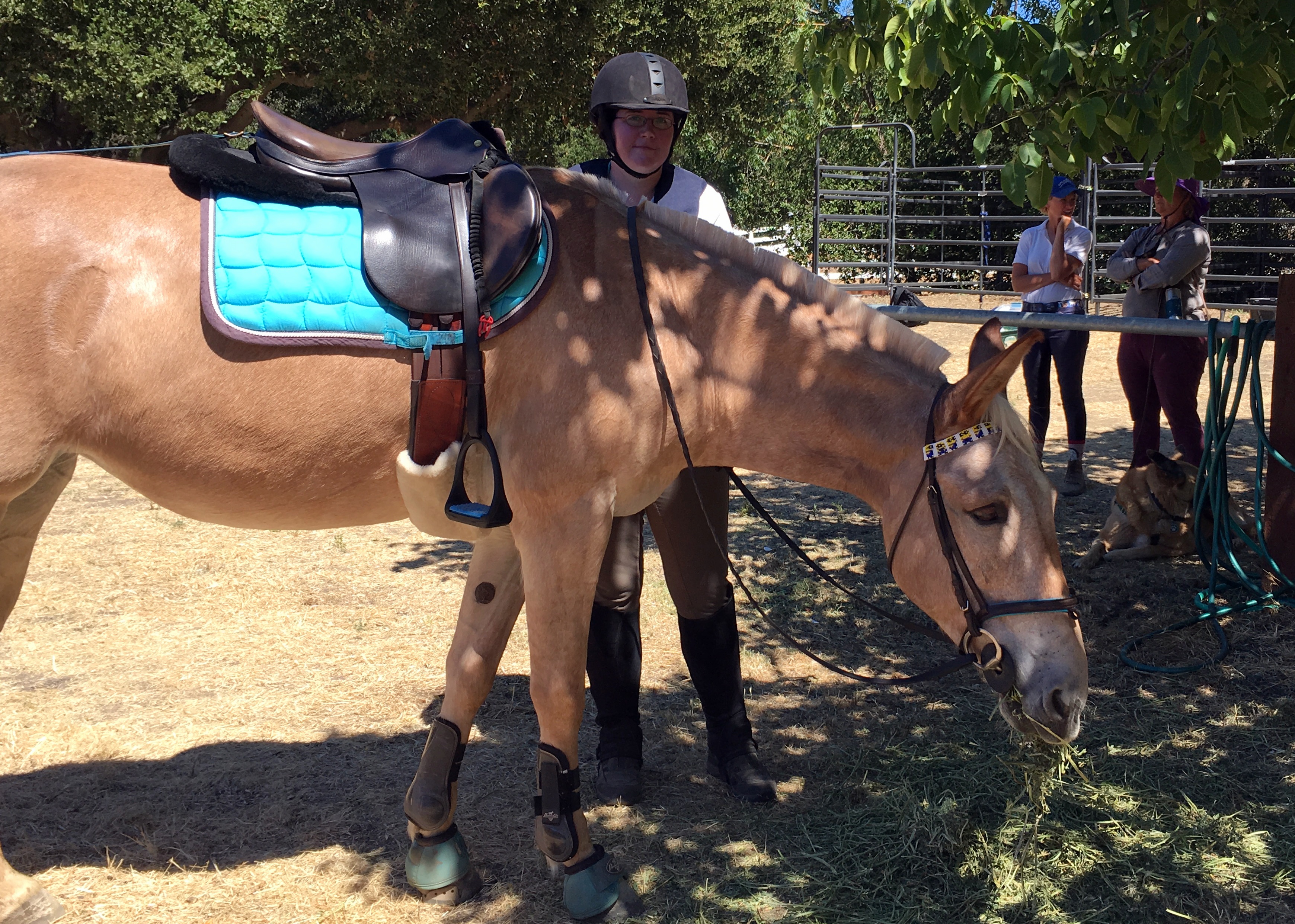 Nilla’s favorite part of the show was eating

After that class, my friend had to go, so we were without a photographer. The ride had a photographer though so I’m hoping the pictures will get posted soon and I’ll do another post on the rest of the classes that my husband and I did together. In addition to being a great schooling experience for Eugene, this was such a fun show.

The hurry up and wait aspect of hunter/jumper shows still isn’t my favorite, but I really enjoyed the jumpers class and think I would do that again. I also had a lot of fun in the games classes that I’ll get to in the next post. I’m also enjoying learning about new types of classes, like hunter hack. So readers, what’s your favorite class at hunter/jumper shows?