We had plans to go to Donner Pass to go horse camping this past weekend, but the Sierras actually got rain so we had to cancel those plans. I searched around and found one open camp ground with horse corrals. We went to Joseph D. Grant park in San Jose. It was only about 45 minutes away although the route to get to the park was up a very narrow windy road with way too many bicyclists and oncoming cars to make trailering fun.

The regular campground was full for the weekend, but the horse campground was only us and 2 other horses. There are 8 spots with 2 corrals each and a small pasture. The other women who were there said they’ve been there before and never see other people at the horse campground. This was great for us since one of the things we hate about car camping is the usual close proximity to lots of other – usually loud – people.

On Saturday, we actually slept in and then got breakfast and picked up some last minute supplies before going to the barn. The ponies loaded easily and we made the short drive to the park. When we got there and were checking in at the ranger station, I hopped out of the truck to check on the ponies and found they had torn down the metal grate between their heads. Nilla was also drenched in sweat. So much so that it was dripping off of her and it honestly looked like she’d peed in the trailer there was so much liquid.

We hurried over to the campground and pulled them both off. Nilla was bleeding from multiple locations and they had managed to move the main divider pole out of it’s hole in the floor. We had to take every part of the trailer off and then get a hammer to bash the pole back into place. Nilla had cuts on her back left and her front right. The front was from pawing at the side of the trailer. The back injuries were from being kicked by Shasta. We could not figure out – at the time – how they moved the divider post. 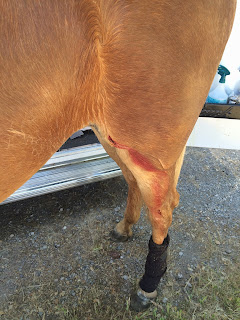 Once we reconstructed our trailer and set up our campground, it was almost 4pm, so we just did a quick ride to get them moving and see if Nilla was off from her injuries. We did a 2.5 mile loop and walked most of it since Nilla was a little off. Oddly enough she seemed to be off on her front left, which was uninjured. She did get better as we went along so I think maybe she was stiff and needed to stretch. We did encounter the sounds of cows though we never saw them. Shasta basically lost her mind. She was snorting and spinning herself from side to side. At points, she was literally sidepassing down the trail. Thankfully, Nilla was unconcerned about the cows. However, she was somewhat concerned about Shasta and was watching her to see if she should also freak out.

When we got back to the campsite, we put the ponies away and fed them their beetpulp mash. Then we made our own dinner. We had pre-made salmon packets and corn on the cob packets and threw them over the fire to cook. The salmon was great. It basically steamed in the foil packet so it was super juicy and really tasty. 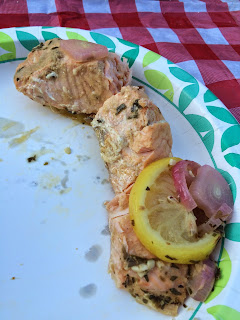 As we were eating, the ponies were trying to eat all of the grass outside of their pens. Nilla figured out how to stick her entire head through and deform her neck in order to further stuff her face. 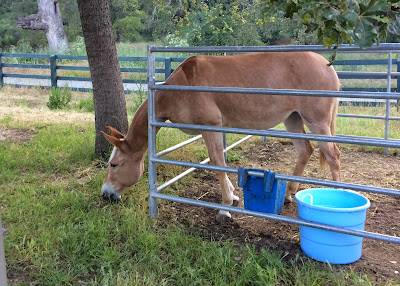 After dinner, we walked over to the campground’s natural amphitheater where a ranger was giving a talk on the local wildlife. It was a cool talk and as we were watching, we got to see some wildlife demonstrations including an unplanned fly by of a hawk with a mouse in its beak. After the talk, the ranger stuck around to answer questions and I asked if the ground squirrels, which are everywhere at the park, have the plague (yes, the plague). He said none had ever tested for it, but that it was entirely possible as some of the colonies look pretty miserable.

We went back to our camp site at that point and made s’mores. I think my favorite part of camping is the food. 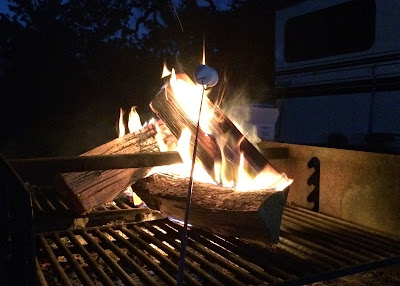 After s’mores we went into the truck to watch a movie on our iPad. The truck has a real mattress in it and a bunch of blankets and pillows so I think we’re quickly drifting from real camping, but we still had a lot of fun. It was really cold though and I wish I had brought the ponies’ blankets, but I totally forgot them. I need to remember next time.

Stay tuned for days 2 and 3 of camping and riding – where we actually rode real distances and saw cool things.