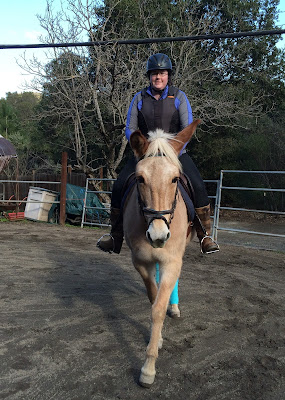 At the walk only. But still, it’s more than nothing. 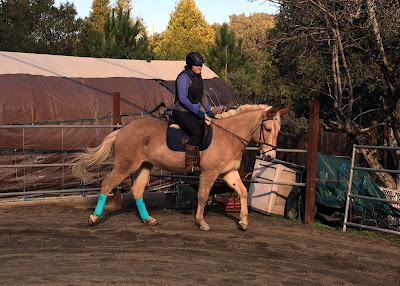 I was away for Christmas, but returned and lunged her on New Year’s eve to determine her soundness. She looked really good although very energetic. So on New Year’s day I had my husband help me get on her. She was a brat. Just totally full of energy and wanting to take off the entire time. Our discussions went like this:

Nilla: Trot?
Me: No
Nilla: Roots and crow hops and tries to take off
Me: Still No

We only rode for 15 minutes and then came back the next day to do it again. This time my husband rode Dijon and we went up to the upper arena which was briefly open in between rain storms.

Nilla continued to be a nut and my husband finally caught one of her little hops on camera. He set up the poles thinking that having poles to do might mental occupy her and keep her from trying to go faster. I figured they’d just get her even more excited. Guess who was right? This isn’t a full tantrum, just an attempt to trot without any bolting or bucking, but you can see the freshness. We stopped doing poles after this.

Since I can only walk for now, I’m doing a lot of walk/halt and halt/walk work as well as lots of bending on circles and figure eights. I’ve also been doing a bit of turn on the forehand and turn on the haunches. Nilla loves turn on the forehand so I rarely do it because she’ll try to do it during halts and when I want her to just stand still or make a normal turn. She despises turn on the haunches though. Since I really need to get more control of her shoulders if we’re going to progress in dressage, I’ve been practicing those more while we can only walk.

Although I rode in this rain, it was a light shower. It’s started raining for real again Monday night so I don’t know when I’ll get back on. I honestly don’t know how I’m going to make it through the winter.