I have kept my stirrups off even after my previous post. I did make a few safety modifications: 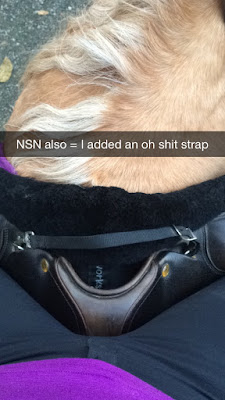 It’s actually good that I’m riding Dijon so much again. His behavior has improved even in just the six rides I’ve managed this month. He will now walk down the hill and out of the arena without spinning and trying to bolt.

This evening we did run have a bit of an adventure. Our barn is near a special needs camp. The camp operates all year round because classrooms and school groups go there during the school year. As we were heading down a fire trail towards the camp, there was a lot of screaming going on. Dijon thought this might mean there was a threat and got pretty amped. He didn’t actually do anything, but he was excited.

As we were coming back to the barn, the barn owner’s cottage tenant was walking the dogs down the trail. The one dog is very friendly, but a very exuberant golden retriever. While he wouldn’t attack Dijon, he would try to “play” with him. The dog was bounding down the trail towards us while barking and leaping through the air. Dijon isn’t scared of dogs, but he was already amped from screaming children and now there was a dog boinging towards him. So I hopped off just to be safe.

We walked past the dogs without an issue, but: 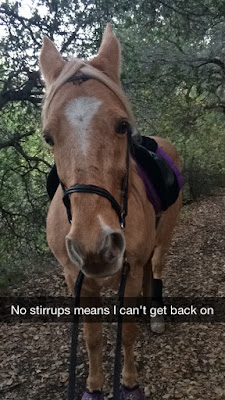 Luckily we were close to home so I only had to walk about a 1/4 mile back to the arena where I was able to combine a sawhorse with the mounting block to get back on. From there we carried on back to the barn where I fed the ponies as the sun set over the hills.
How is everyone else’s No Stirrup November going?

5 thoughts on “No Stirrup November So Far”