For the last few days thousands – possibly millions – of little robins have been migrating through the valley our barn is in. On Monday they were going by the whole time I was there and while I was riding. The barn owner says they start around 3:30 and go until sunset. On Wednesday I only saw a few hundred go by, not the thousands I saw on Monday, but it’s still such an amazing thing to see. 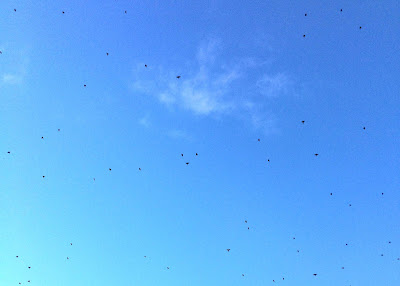 There were so many it as distracting me from getting any actually riding done. I just kept stopping to stare at the sky. Here’s a video. Imagine this going on for hours. I could look down the valley and see them coming, though I couldn’t capture that on the camera.

Our barn lost another one of the old horses. This horse has actually been sick for a few years and had a kidney problem. He had no teeth so he ate wet hay pallets and his owner hand cut hay for him with scissors every day. In the last year he’d gotten to the point where he had to be intubated or have fluids at least once a month for colic. On Monday evening, the BO and horse’s owner asked me if I could help get some ban amine in him while they waited for the vet. I couldn’t help as he was throwing his head so wildly he was going to break my jaw and he nearly bit me at one point. I left shortly after, but got the email the next morning saying he’d been put to sleep.

Today I talked to the BO and got the whole story, which just really sucked. Apparently they tried to tube him and the fluids starting coming back out suggesting a really bad blockage. They tried to put him to sleep and apparently his kidneys were in such bad shape his body wasn’t processing the drugs and it took forever for him to die. The barn owner said it was the worst one she’d ever witnessed. Sometimes it isn’t a good thing to keep them going forever.

The upper arena has been open so we’ve been doing some actually trot and canter work. She’s still not back to full power so we do maybe 5-6 minutes of trotting/cantering interspersed between lots of walking (or stopping and staring at robins). I need an interval timer, but until I get one I’ve been playing music and doing trot for 30 seconds at the start of a song, then walk the rest of the song. Trot the next song for 30 seconds, and so on. We work on lots of collection, bending, and lateral movement at the walk. We also practice halting a lot. 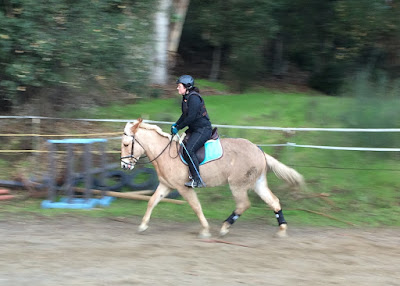 Her collection and behavior at the walk has improved dramatically. Unfortunately, her canter work has regressed months back from what is was pre-injury. Her trot work might be ok, it’s hard to tell as 30 seconds of trotting is how much time I currently need to convince her to collect and get on the bit. She’s much rather giraffe and throw her tongue around. 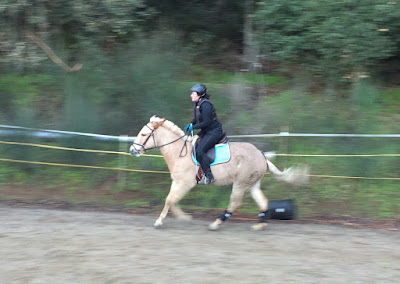 Her soundness is also a little questionable. It really hard for me to tell how bad it is though as she wasn’t really 100% sound on the injured leg even before the injury because that was her bad hock. I’m holding off on a vet check for now as it’s going to start raining again and we’ll probably stop riding again for the next few months.

I am actually really tempted to send her away to Laura for a few months. I just can’t ride in the never-ending rain and mud so we’re not getting anything done and I know Laura can work wonders on her. The only thing holding me back is that I like being able to say that I’ve trained this mule myself (for the most part). I’ve never ridden or wanted to ride a made horse. I don’t feel like there’s anything to be particularly proud of in arriving at a show with a horse someone else trained and just riding it to a ribbon. At the same time, it’s a few months. I’m not entering her into permanent professional training. I keep going back and forth. Mostly depending on how much it’s raining or how muddy she looks on any given day.

Back in December, I won Kate’s giveaway. The prize was a cuff from Beka’s Straight Shot Metal Smashing. I was really excited to finally see the box in my mail on Monday. I quickly opened the package and found so much more than just the one bracelet I was expecting. 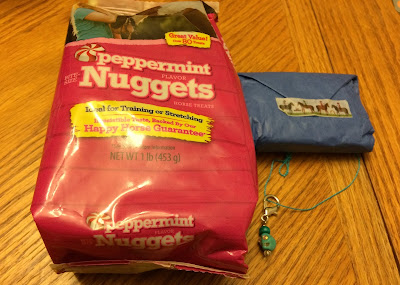 There was also a package of horse treats, a bridle charm, and a paper wrapped package with not one, but two bracelets. 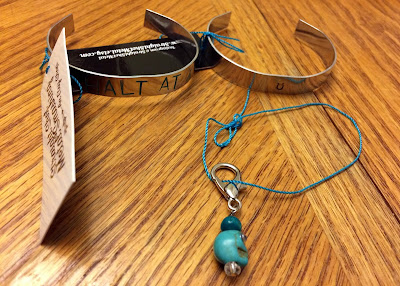 The bracelet is great. It’s in Nilla’s colors. It says “Halt at X” and then in tiny print on the side, “breathe.” This is totally a thing I need to remember to do. I frequently freak out so much that I just hold my breath for the first half of the test. I’m planning on wearing this hidden under my jacket at my next show. It’s already in a bag with my stock tie. The second bracelet was an unexpected and lovely surprise. I put it in my regular jewelry box and I’ll wear it out next time I go out.

I’m also really excited about the treats. I go through so many of these. As soon as I opened the box, I laughed and took this picture: 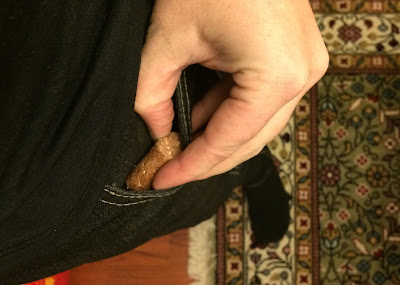 I pretty much always have these in my pockets. And they often gather on my nightstand as well when I bother to empty my pockets. I give out the nice homemade peppermint treats to the horses as well, but these I can keep in my pocket while riding to reward good behavior. We have a giant bucket filled with a 50lb bag of them at the barn. There’s another 20lb or so bag in a drawer in our trailer. But ours are all apple flavored. I have seriously been trying to justify buying a new flavor, but not sure how to when we already own so many. So I’m honestly really excited about the peppermint treats.

Thanks again to Kate for the contest and thanks to Beka for the bracelets.