When I got back from the holidays, I was contacted by Horse Nation letting me know that’d I’d won a contest for a Kentucky Performance Products Prize Pack. Apparently the original winner never responded so they “re-drew” and I won. Yay for me! 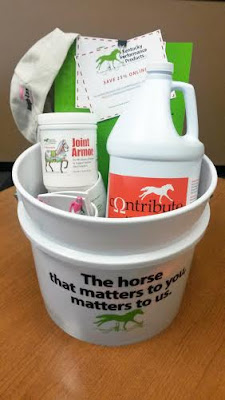 Since I’m currently battling ongoing joint issues in Nilla, I was pretty excited to win some expensive joint supplements to try out. It took a bit for them to ship out and when they arrived I was shocked at how big the box was. I took a picture of it and then realized it needed some size context. So I put my dog on it. 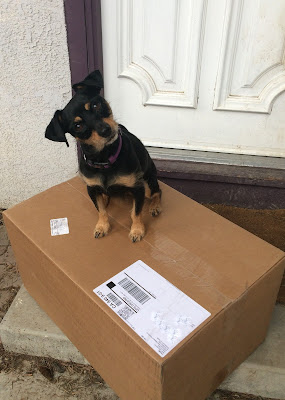 The box was full of stuff. You can’t really see in the picture, but there were mugs, pens, lip balms, some cool ice packs, and the featured oil and joint armor. Aside from the supplements, the bucket is probably the best part. It’s really heavy duty and nice. Even my husband saw all the stuff laid out on the table and said “that’s a nice bucket.”

I already have a joint supplement, but I’ll sub the joint armor in for a few months and see how it goes. The oil looks more interesting. I usually just use vegetable oil, so I’d like to see if better oil works better.

Big shout out to Horse Nation for the prize. I love participating in online contests. Have you ever won any?