Nilla is pissed. I don’t think any of the many drugs we have her on are doing anything. Except maybe making her feel a little too happy. Saturday evening went pretty well, she was still pretty quiet and still happy to have so much hay available. By Sunday, hay was boring and stalls were boring and why were we doing this to her and more food was needed now and much pawing and screaming was necessary.

On Monday, I tied her up and left her with a bucket filled with chaffehay and carrots and walked off to check her water and clean her stall. Then I heard a noise and looked out of her stall to see that she had untied herself and was trotting down the driveway. I cannot even. I just don’t. WTF.

My husband caught her and I took her to walk her back to the tie and she tried to rear. That was instantly nipped in the bud (the chain was on) and she settled down and walked back with me. There I tied her again and added a second cross tie type tie that she can’t untie. The whole time I was cleaning her stall, she was pawing and shuffling around. She’s pawing with a front leg, so I don’t think it’s damaging the injury, but it’s an indicator of her energy/obnoxiousness level.

I really, really want to punch her in the face. Trust me, no mules have actually been punched in the face. I, like Carly, do not actually beat my horse. But I really do not appreciate this behavior.

On the plus side -I’m fairly sure this not actually a positive, but I’m grasping for straws here – I’ve been making major use of the pill hider treats. On Saturday, she’d already eaten, but I needed to get Benadryl into her so I popped them in a pill. 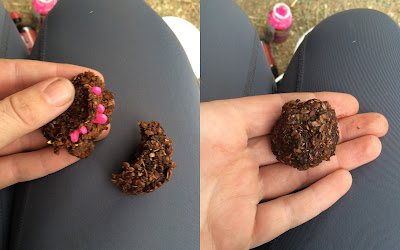 On Sunday, when we started the Bute, I started giving her Omeprazole in the treats. She’s actually good about eating most meds in her food, but she hates the pop rocks. It’s the one thing that will make her not eat her entire bucket. So I’ve been cutting the treats in half, flattening them, making a cup, filling it with a packet of pop rocks, covering with the other half of the treat and then sealing and rolling. 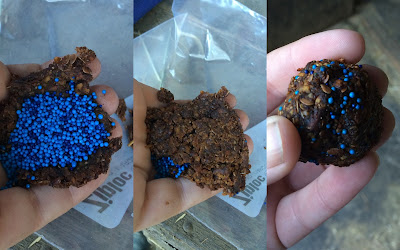 It’s incredibly messy, but works really well. It’s also a lot easier to do with gloves, which I started wearing after taking these pictures. I’ve ordered UlcerGuard and it will arrive on Tuesday, but I had the pop rocks on hand.

The bandage comes off Tuesday and she can go out into her paddock. Thank god, because she does not want to be stuck in a stall anymore.

10 thoughts on “Stall Rest with a Demon Mule”