My husband and I both volunteered as jump judges for XC on Saturday because his Stadium time was late enough. I did Advanced and Intermediate. My husband just did Intermediate because he had to meet the Chiro (Eugene got Chiro on Friday after dressage and the chiro cam back to check on him Saturday before stadium. He was still a bit off, but she predicted it would take a few days for him to settle back into normal.)

I got a really cool spot for XC. When I first found out that I had jump one, I was a little disappointed. It’s a pretty boring jump and at most of the smaller shows I’ve been to, the start gate can see jump 1 and just marks it from there. But it turns out they needed someone experienced at 1 because that person also marks the time for jump one. I don’t know why actually. I should have asked. I guess as a back-up for the start-timer so if anyone complains about time penalties they have 2 judges saying when that person started? I don’t know. Maybe someone can chime in here.

Anyway, it was a great spot because I got shade (and there are probably like 2 jumps on the entire course with shade) and I could see the water complex from where I was sitting so I got to watch an interesting jump without the stress of worrying about judging a combination. 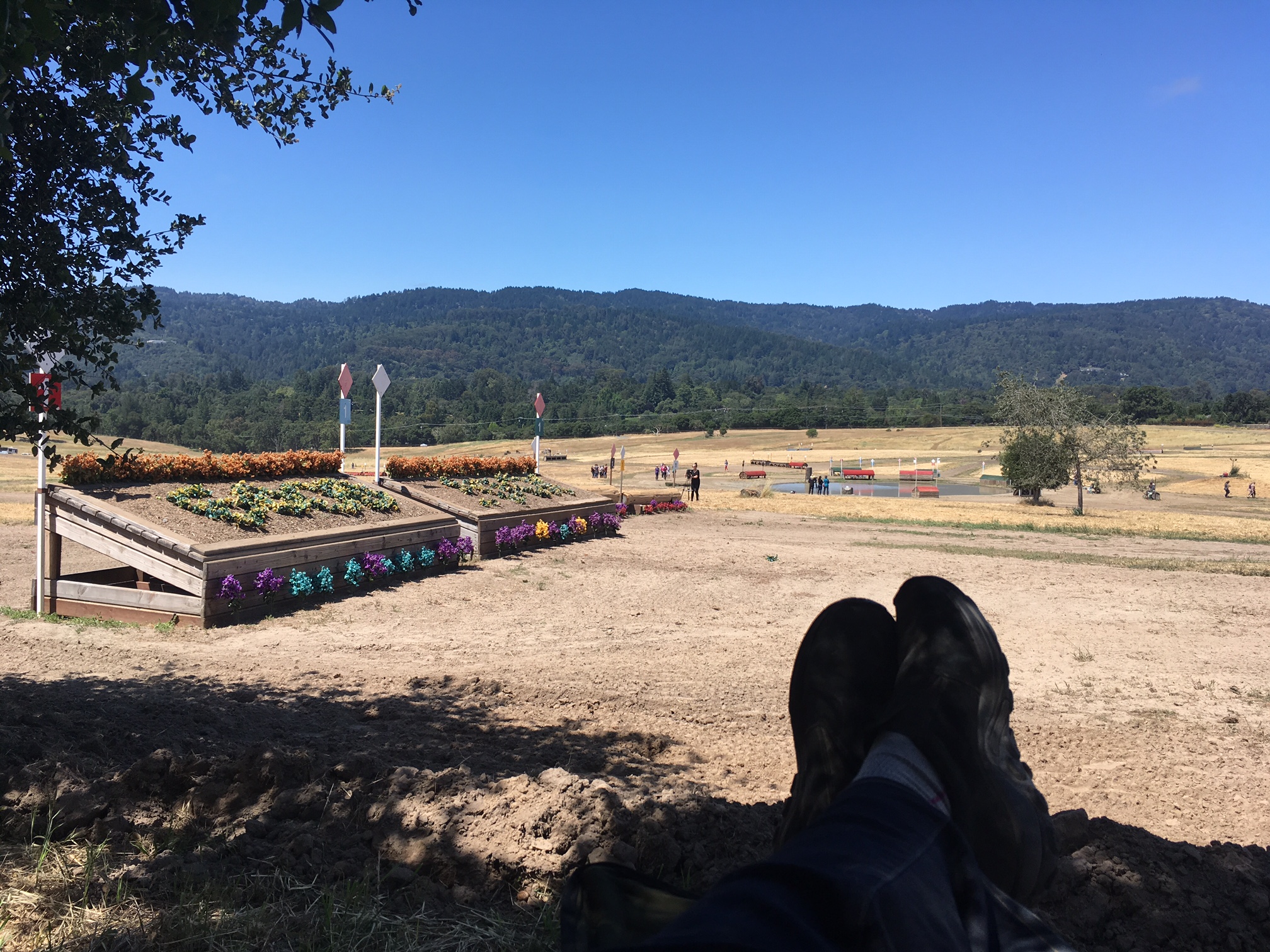 And I found it really interesting seeing how the riders handled the start box. Some came over early and walked around, some came over at the last moment. One rider had to be lead over from the warm-up and held in place by the person on the ground as the horse was completely losing it’s mind. Another horse had to be shoved into facing the back corner of the box and literally did a spin on its hindquarters the second the timer said go. Part of why I like jump judging is learning from watching the riders so this was a cool experience.

Predictably, the warm-up for stadium was absolutely crazy. I watched a woman nearly run over 3 different people. To be fair, I don’t think you should just stand around in the middle of the arena while instructing your students (stand near the jumps or outside the fence or something logical), but the rider honestly seemed oblivious to their existence. Thankfully Eugene wasn’t feeding off any of the craziness.

My husband was scheduled to go at 3:01. He checked in with the warm-up volunteer when he first arrived and then did some warm up. Around 2:45, he checked in again and was told he was 8 out. Eugene was warming up well, so the plan was to rest him until right before the class then do one more jump to wake him back up. I was on my way over to the other side of the arena to get a good spot for taking pictures when I heard them calling his name on the loud speaker saying he needed to check in at the in gate. So I went over and asked and the woman running the gate said he was supposed to go 4 horses ago and where was he. Umm? It’s 2:50. He’s supposed to go at 3:01. There’s been no announcement that the ring is running ahead and the warm up arena attendant told him he was 8 out. How the hell were we supposed to know he was supposed to go 4 horses ago?

They didn’t get to go back in to do another warm-up jump and I had to race around t try to get some pictures. Eugene was pretty distracted by everything going on and took out a rail on the first jump. 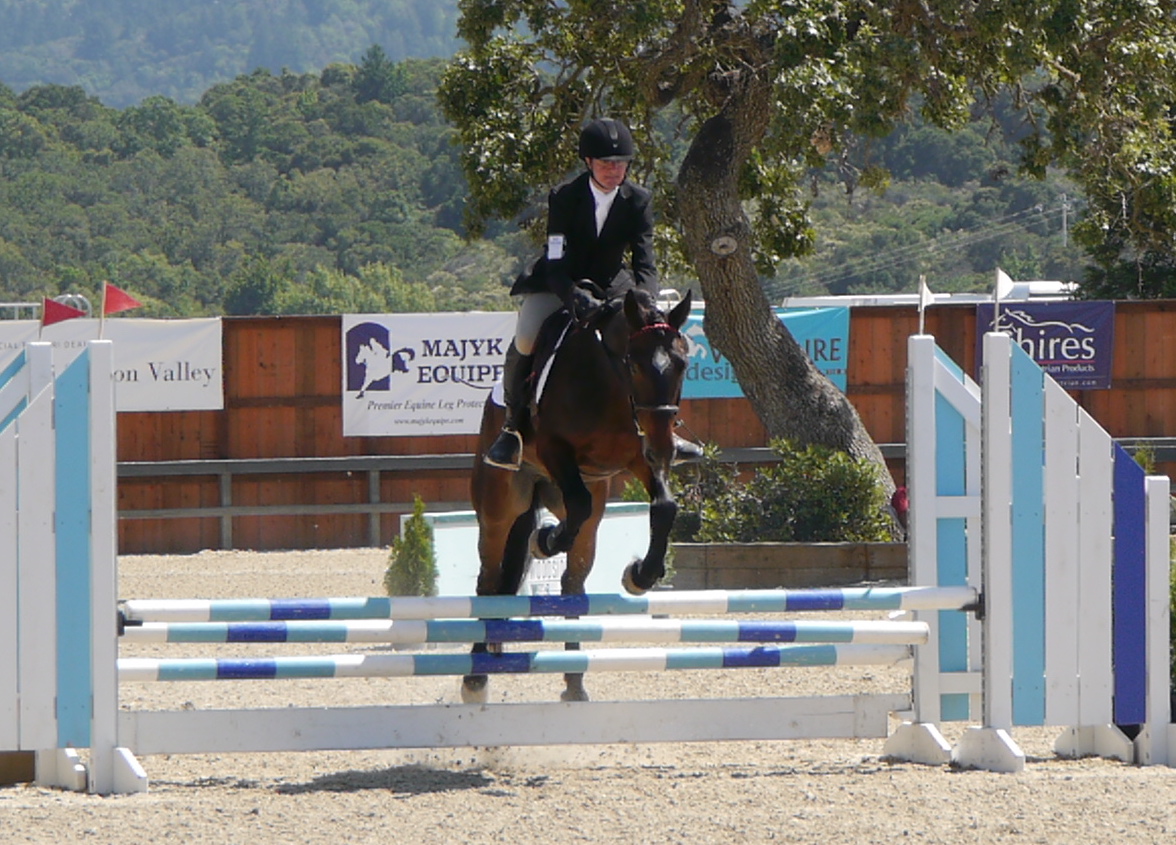 Jump 2 and 3 went well and I got no pictures of jumps 4 or 5, so I can’t remember which one they had a rail at. Jumps 4 and 5 were along the spectator tents and Eugene was a bit squirrelly about that. 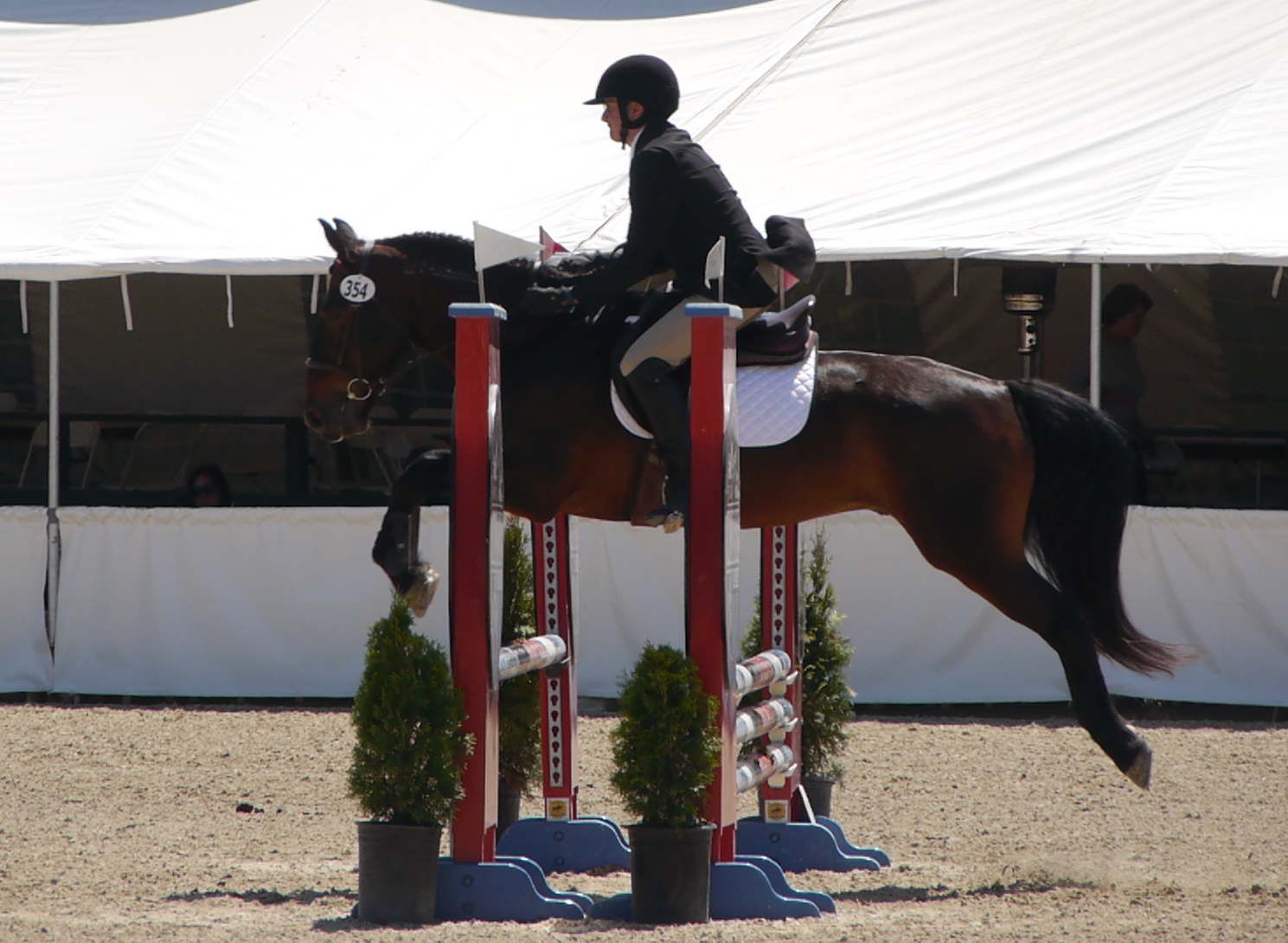 The combination at 6 did not go so well. He came in pretty hesitantly to the first jump and took a rail then wiggled around to the second jump, but cleared it.

7 was an angled jump to a bending line to 8. Our stalls were right near the arena so I had been watching people walk the course with their trainers earlier in the morning. Most trainers were advising slicing 7 to get a good line to 8. Of course, these were the more advanced divisions (Training and Novice) so I told my husband I didn’t think it was a good idea with Eugene. I missed walking the course when they broke before BN because I was still jump judging, but my husband walked it with Kate and thankfully she also advised him not to slice it. Unfortunately, they still took it down. 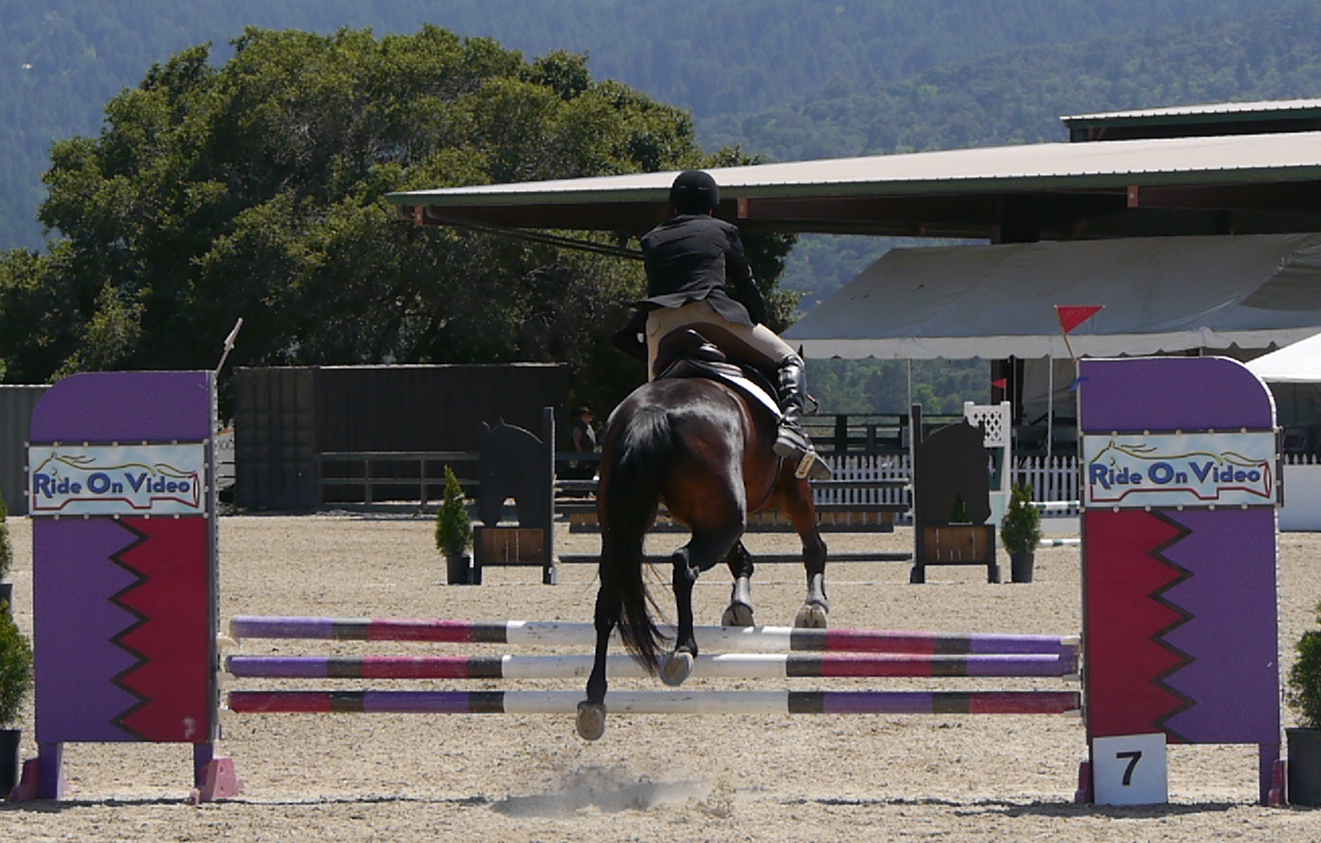 Jumps 8, 9, and 10 all stayed up though I failed to get pictures of 8 or 9. There was a professional photographer, but she hasn’t posted BN pictures yet. I’m hoping she got some good ones because I am terrible at this. 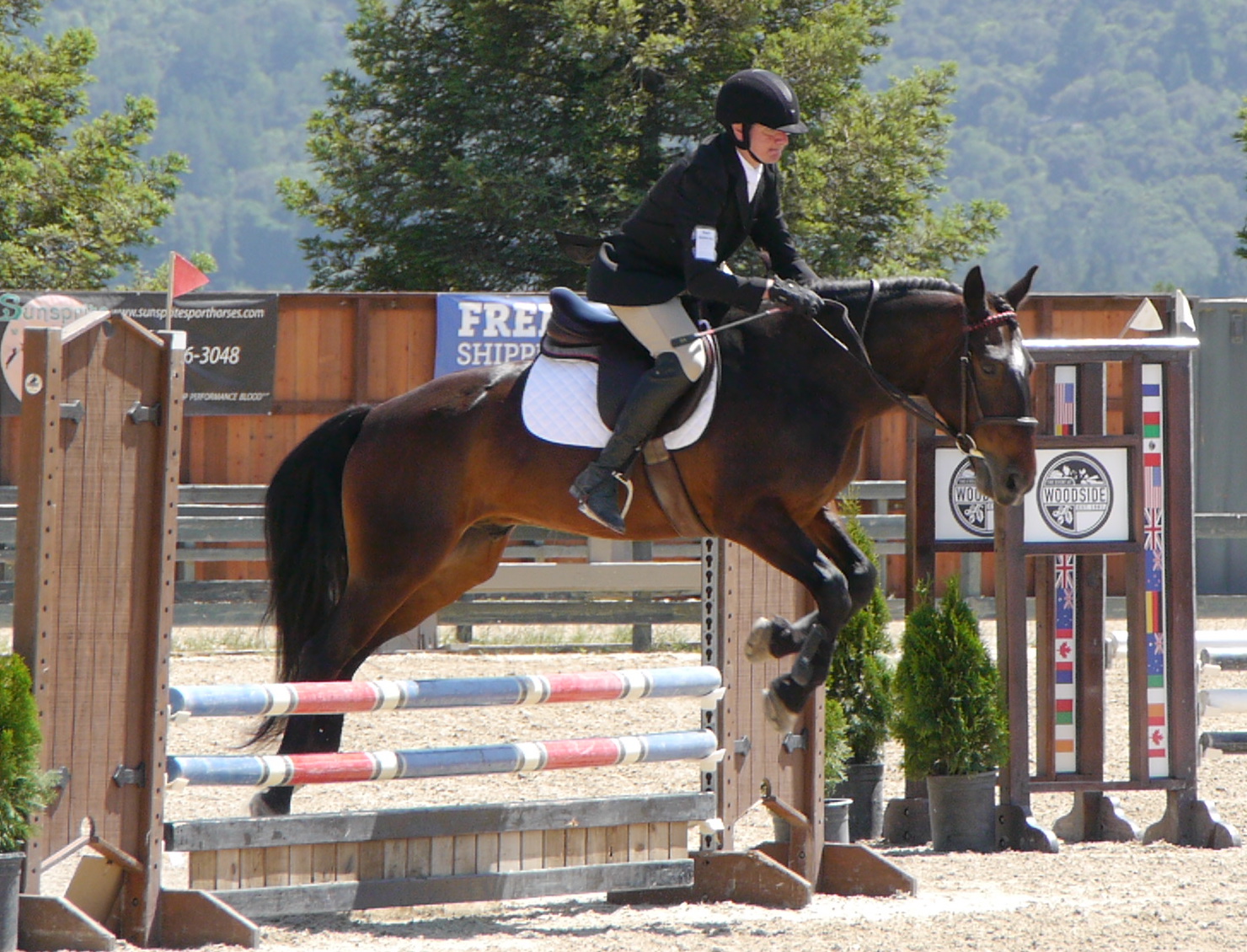 4 rails and no time added 16 points and kept them in last place though some of their competitors also had time and rails so they still weren’t far last. I’m not sure what we’re going to do about Eugene and stadium. In most ways it’s nice that he doesn’t care about mistakes. Oh did you totally crash into that novice jump and get left behind and pull on his face then nearly fall off? No problem. He’ll come right back around and hop over it like nothing bad ever happened. The fact that he doesn’t hold a grudge makes him very amateur friendly, but it’s also left us sort of stumped for stadium. He just doesn’t seem to care if he hits the jumps or not. He loves jumping and gets super excited about it, but he doesn’t care. More lessons are in our future.

16 thoughts on “The Spring Event At Woodside – Stadium”