This weekend we returned to the JK presents schooling show at our local horse park. I went in with a very specific plan: to school. And I do mean school. After our last few shows, I wanted to take Levi into a dressage ring and then be willing to throw the whole thing and actually correct any issues. Before my first test, I went over to the judge and warned her that I planned to school things and I might make some extra circles or re-start movements and would she mind not ringing the bell on me. She warned me I’d still have to take the error points and I said, absolutely; I expect to. I fact, I plan on coming in dead last.

I was so caught up in my plan that I kinda forgot the first halt. Oops. That wasn’t actually part of my plan and I totally forgot about it until making the turn to centerline at the end. I’m gonna call that eventer brain. Anyway… 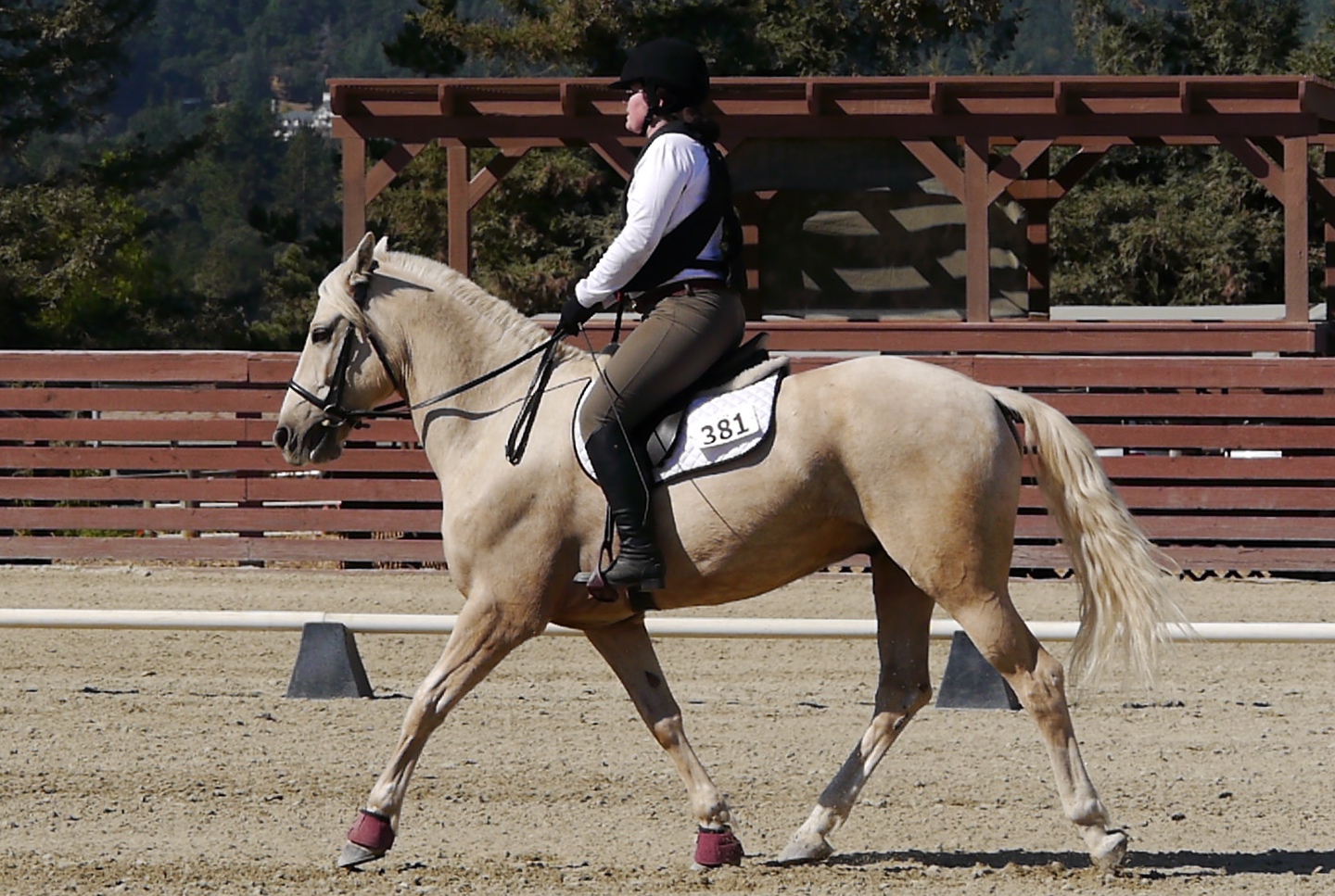 Enter at A, forget to halt at X

The test started out okay. We got a 6 for our first circle with the comment of “needs steadier rhythm and bend.” Fair enough: 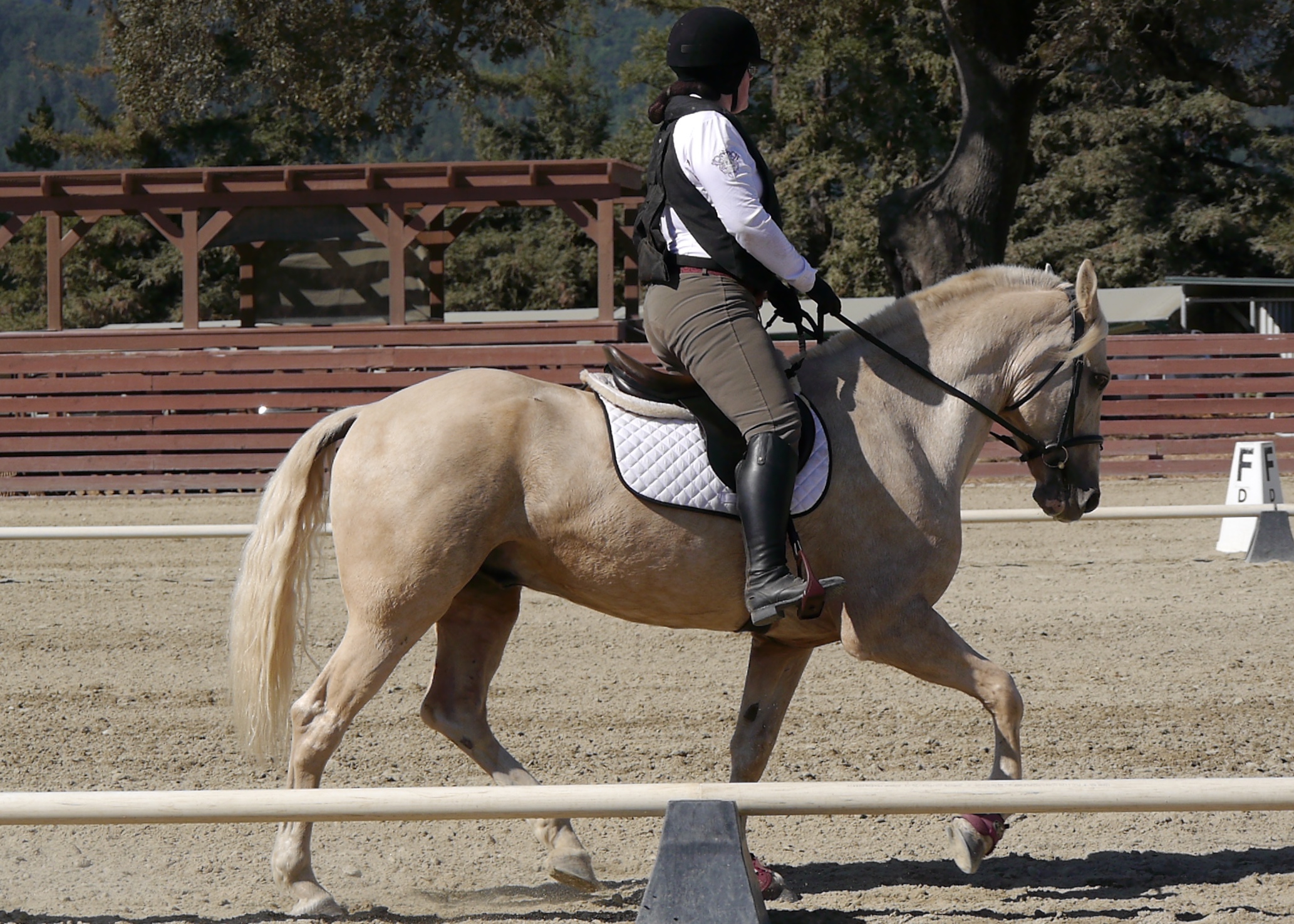 Our first canter wasn’t super pretty, but it wasn’t too bad. I definitely need to stop leaning forward into canter. Comment was “leaning into circle and needs better bend.” Both of those we my fault. I kinda forgot to stere while asking for canter. 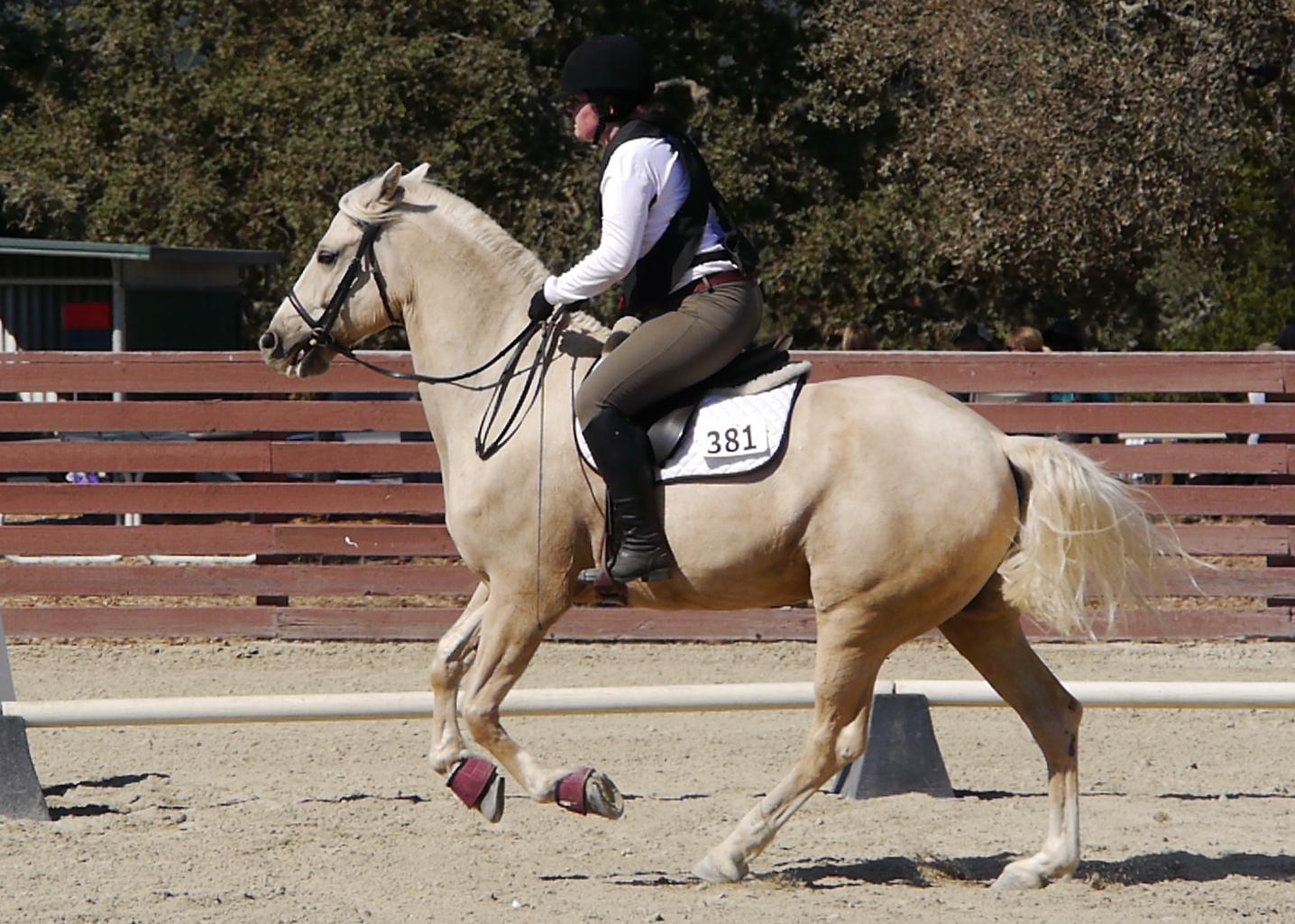 Our canter to trot transition was downhill, but no worse than usual. Walk transition was a bit tense as he really didn’t want to walk and we got “needs relaxation.” Agreed. 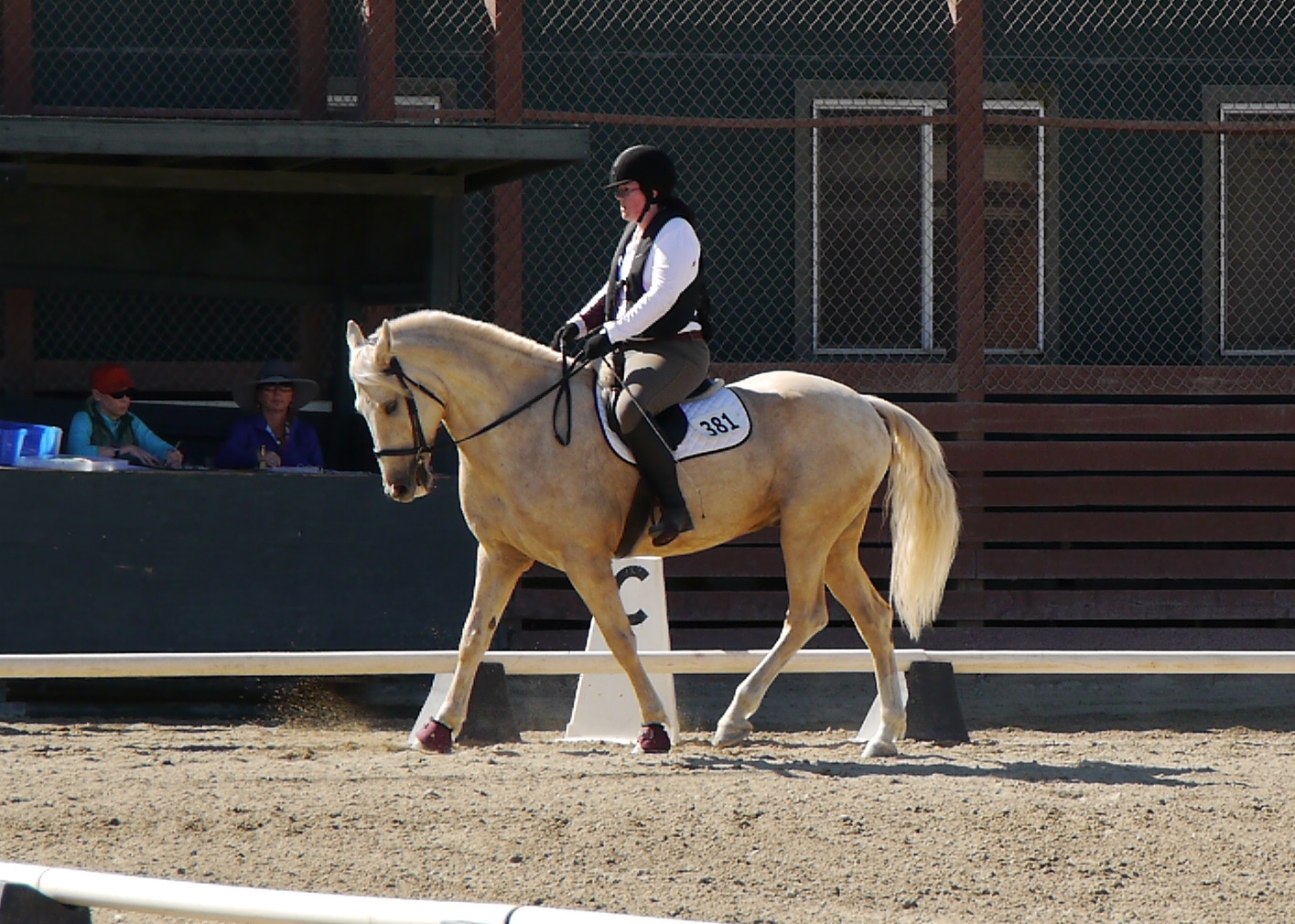 Our free walk felt better than it looks in the pictures, but he was rather distracted. 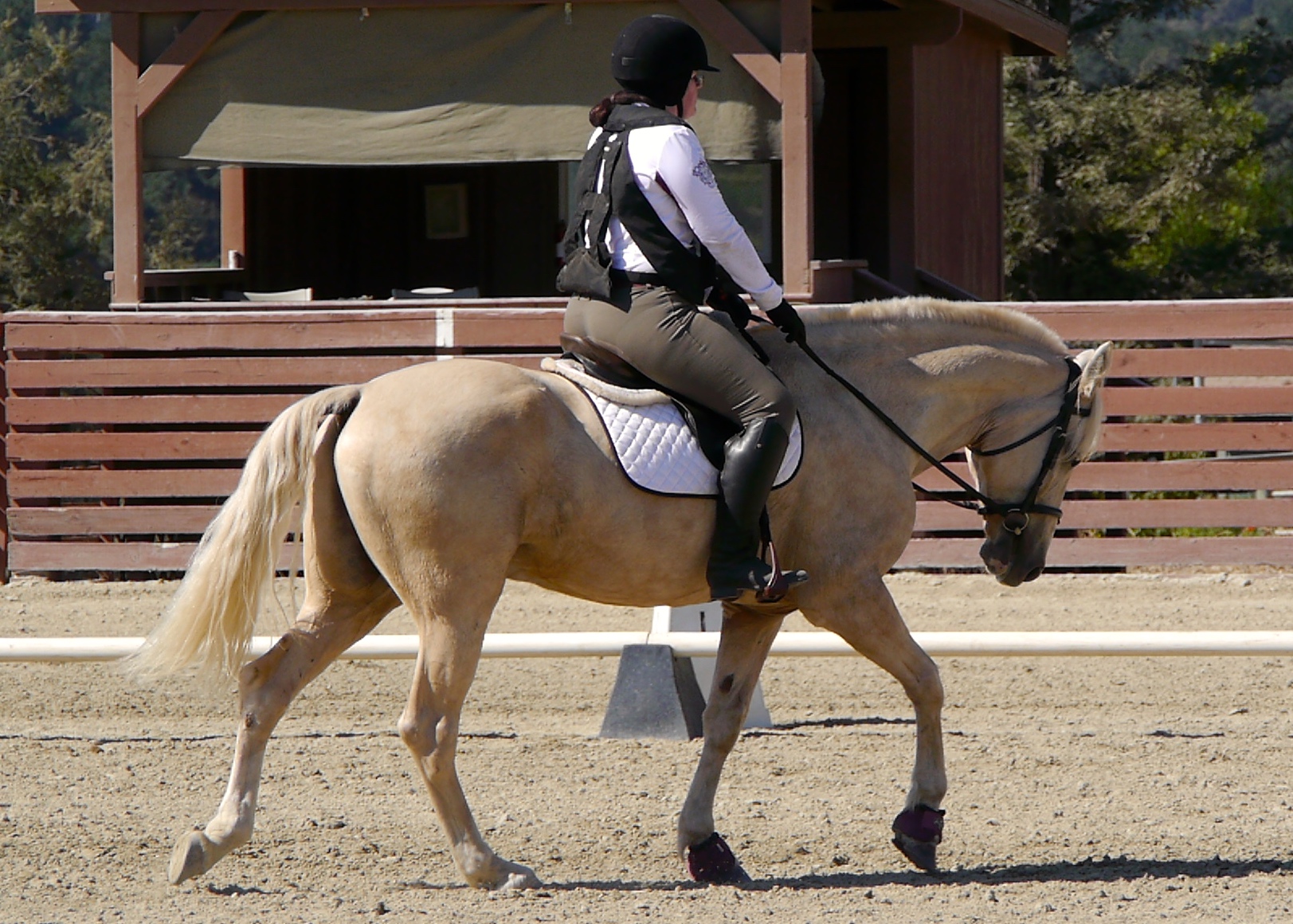 Then we turned right and things went downhill. Like most horses, Levi really struggles with going right. As we started our first right circle, Levi was being a brat. He really didn’t want to listen to my leg and was getting annoyed at my heel nagging him. In hindsight I should have swapped my crop. At the time, I just dug in and turned him into a llama. 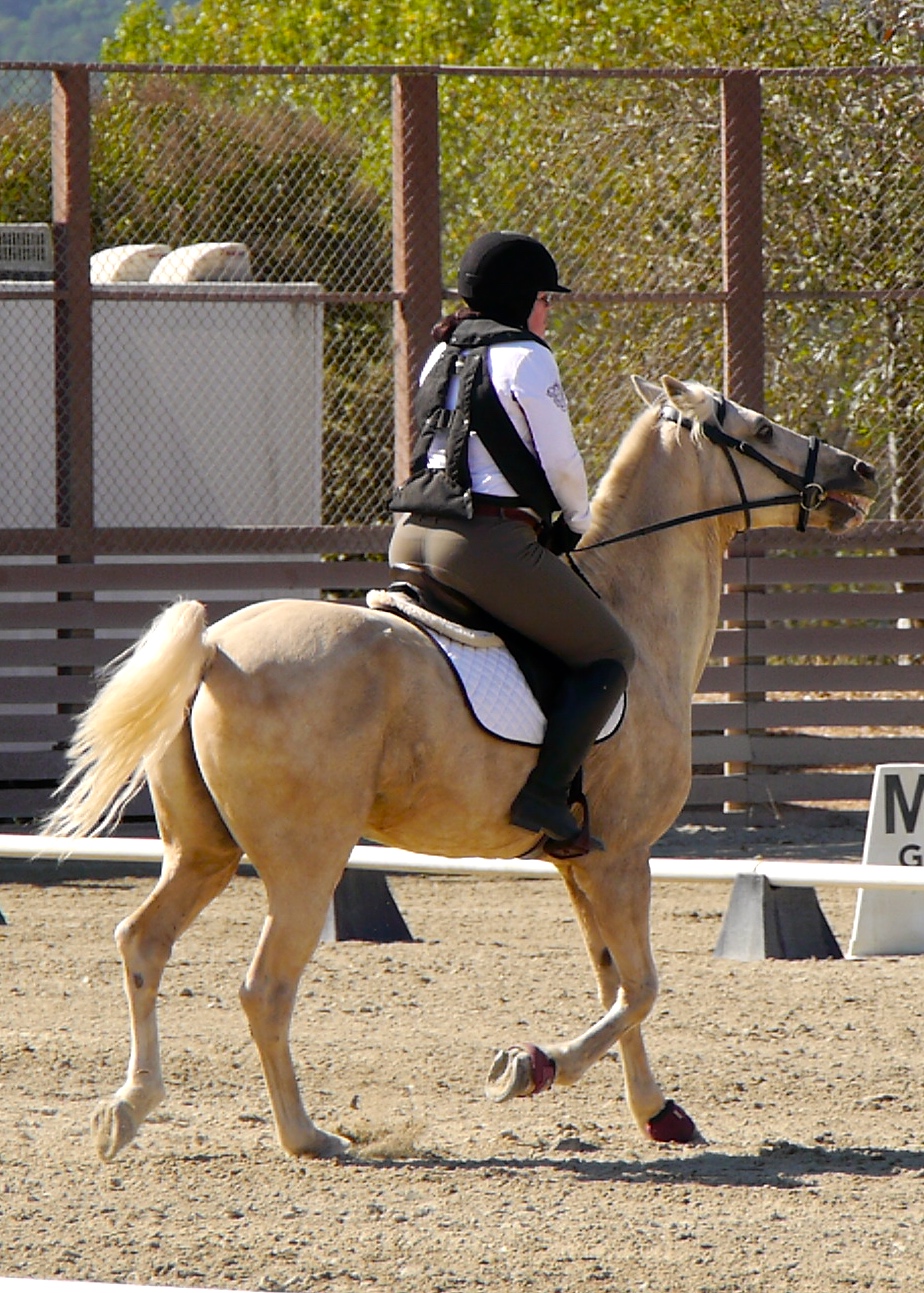 But you know what happens when you’re committed to throwing your test? You can do another circle. And we did. And it was much better than the first though I have no photographic evidence of such. We carried on and as we came around to do our right lead canter transition, Levi exploded into it and then proceeded to buck (sadly the camera cut off at the start of the buck, but you can see it coming).

This was perfect. He had tried it once in warm up then stopped after I got after him. I’m pretty sure he’s figured out that I won’t really address attitude in the court. But this time I could. So we went back to trot, trotted around the circle back to A and asked for canter again. It was so much better. 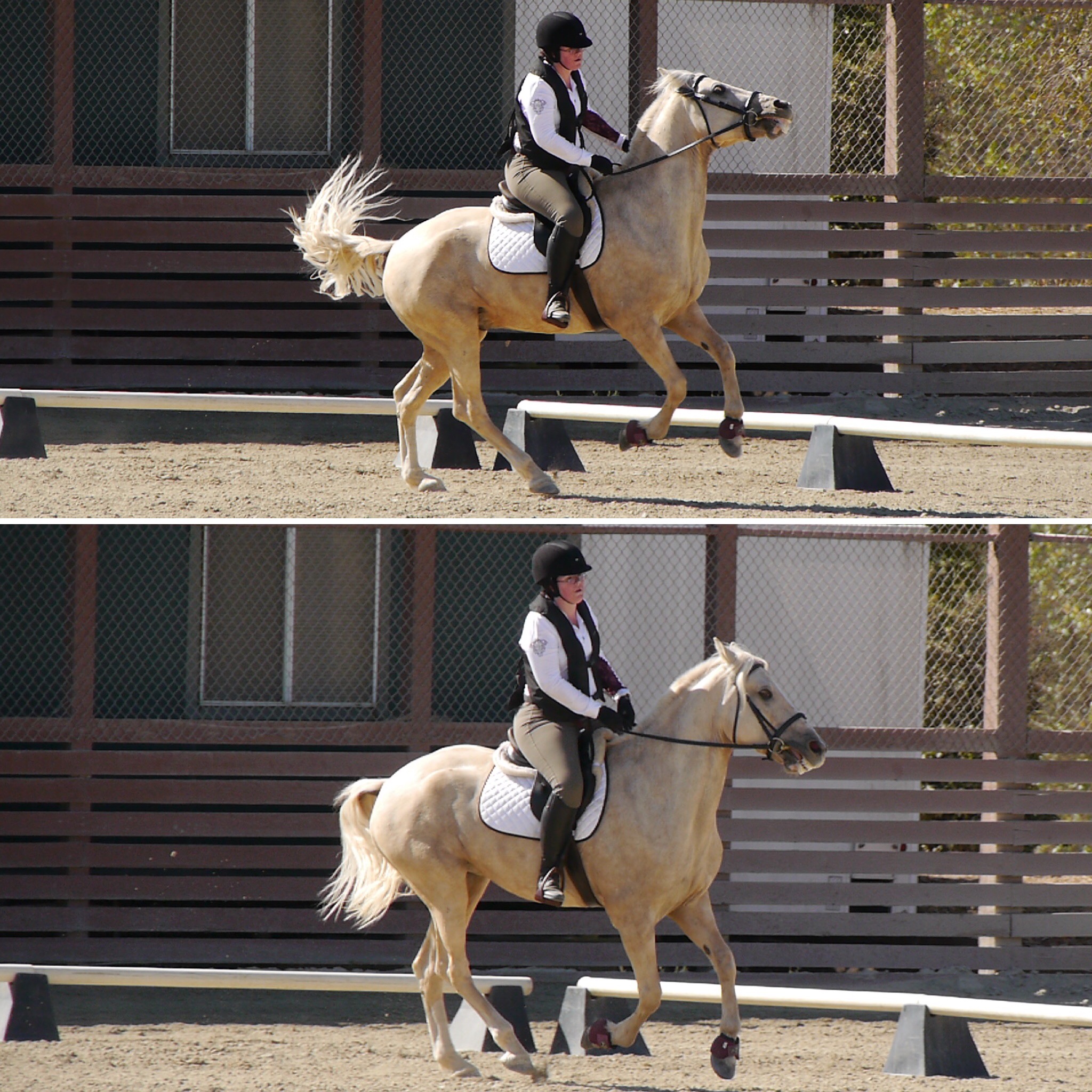 The second circle was really nice too. He was respectful and kept a nice, even pace around and down the long side. We even got a 7 for the canter C-M-B and another 7 on our downward transition. 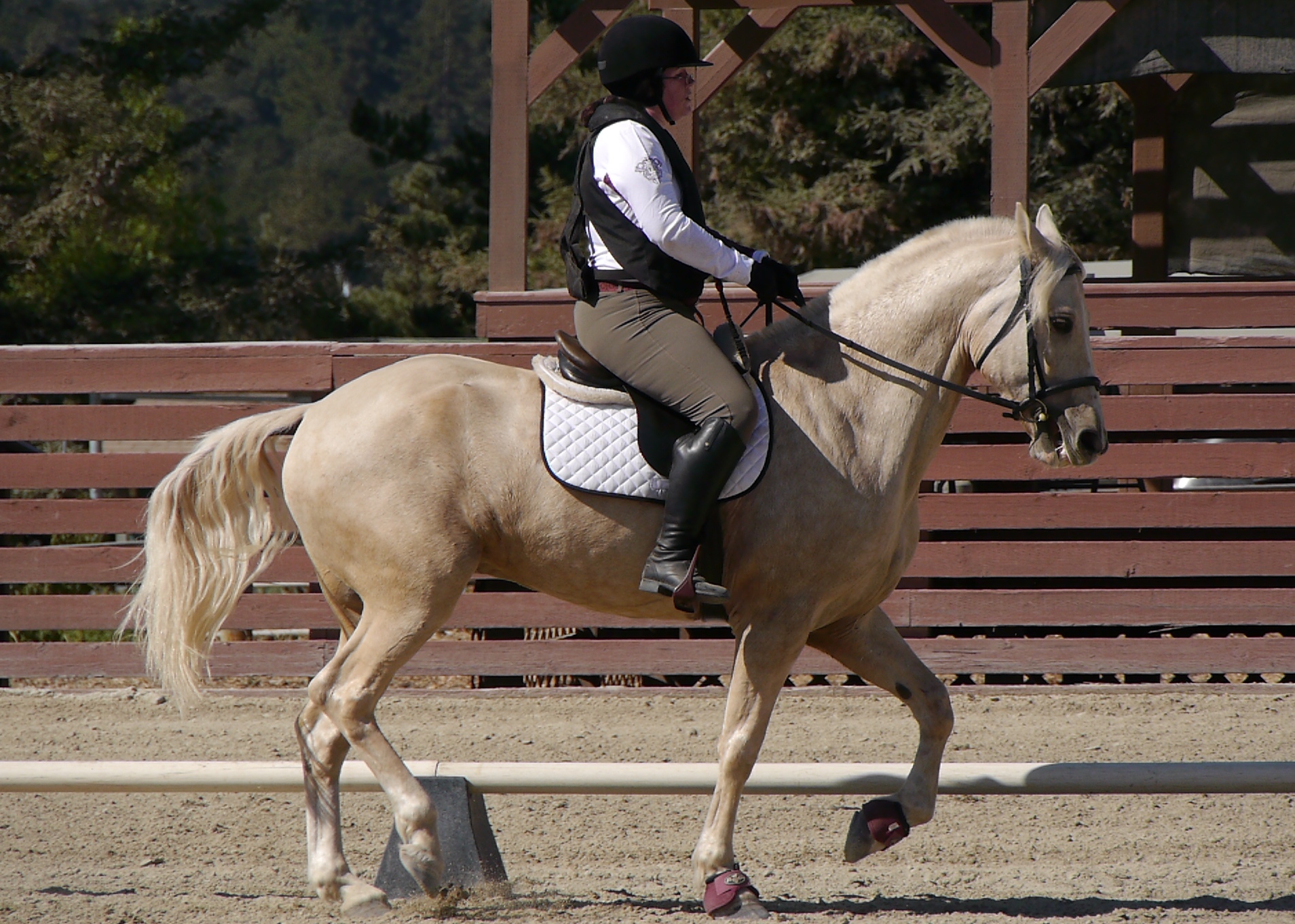 After I finished I told the judge the first lack of halt was just me forgetting and not part of my plan and she laughed and said she thought so, but I had asked her not to ring me so she didn’t. Then she asked what breed Levi was and I told her he was a Mustang. She was shocked and said she thought for sure he was an Andalusian cross. I told her he was out of the Carson City Prison Training program and that his DNA says he’s mostly draft horse. My husband ended up talking to her later and she expressed interest in coming to the next auction to check out the Mustangs. Another Mustang fan created.

We had quite a bit of down time between my first test and second test. My husband’s test was in the middle though so I didn’t have enough time to take Levi back to the trailer. I hopped off and sat at the end of the viewing area and Levi took a nap. He’s definitely getting more relaxed at shows. Well, he is as long as he’s not separated from Eugene.

My husband tried to do a round of jumping after his dressage test, but the jumping ring was ridiculously backed up so I took the ponies to stand in the shade while my husband got us some fries and gatorade. The ponies kept begging us for fries, but then not actually wanting them when we offered one. As I was waiting, the water truck and drag truck drove right behind them and they didn’t even care. They’ve definitely gotten used to being show ponies.

Eventually it was time to get back on and warm up for my second test – Training 2. Levi was pretty tired at this point and a bit lazy. I had to school right lead canter multiple times before he did it, but we were ready. For this test I went in thinking I would school a movement if it went particularly bad, but I wasn’t fully committed to blowing the test. I was hoping the correction I did in the first test would hold. 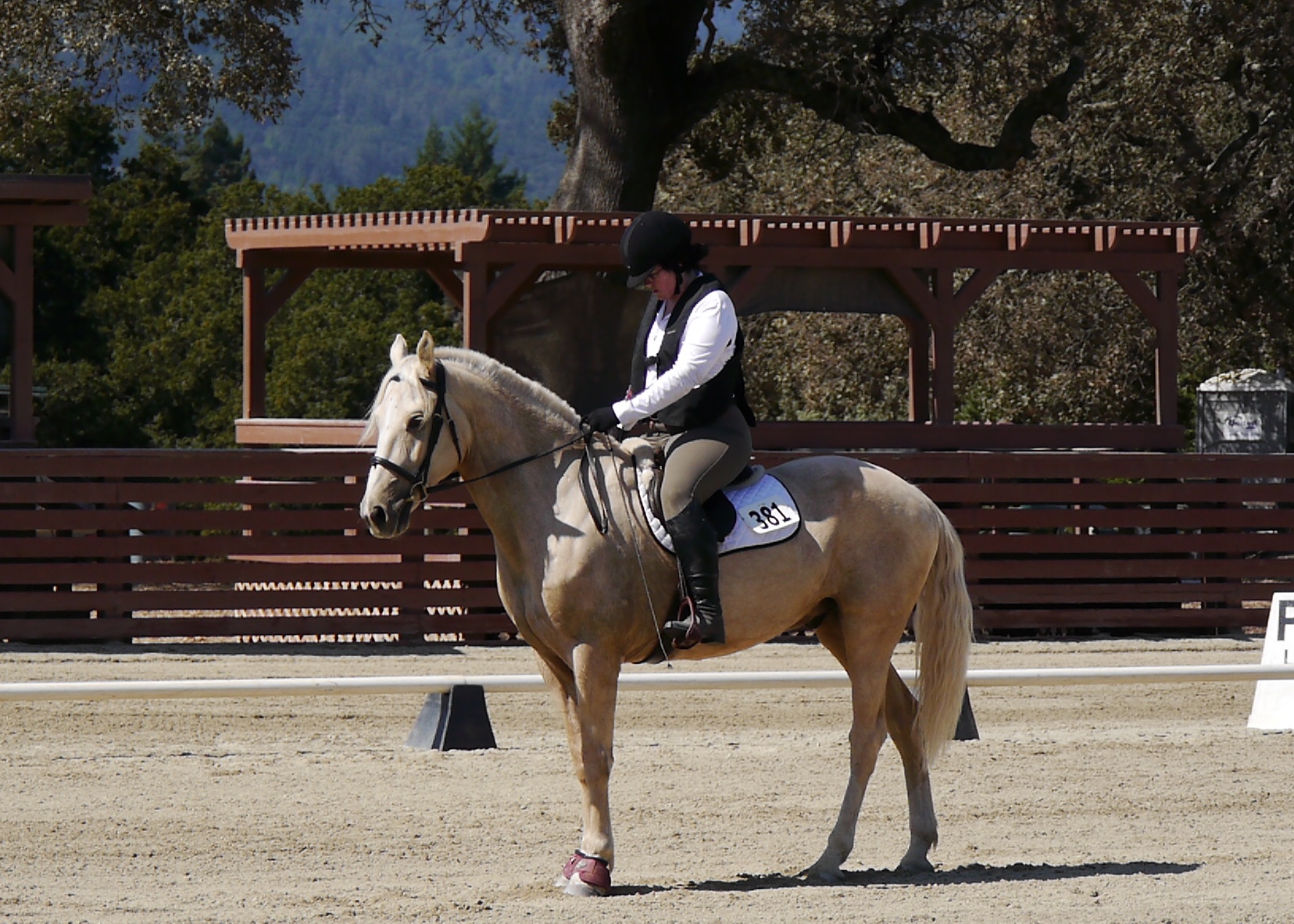 Not that square, but the judge can’t really tell from C. It was a decent halt for him. 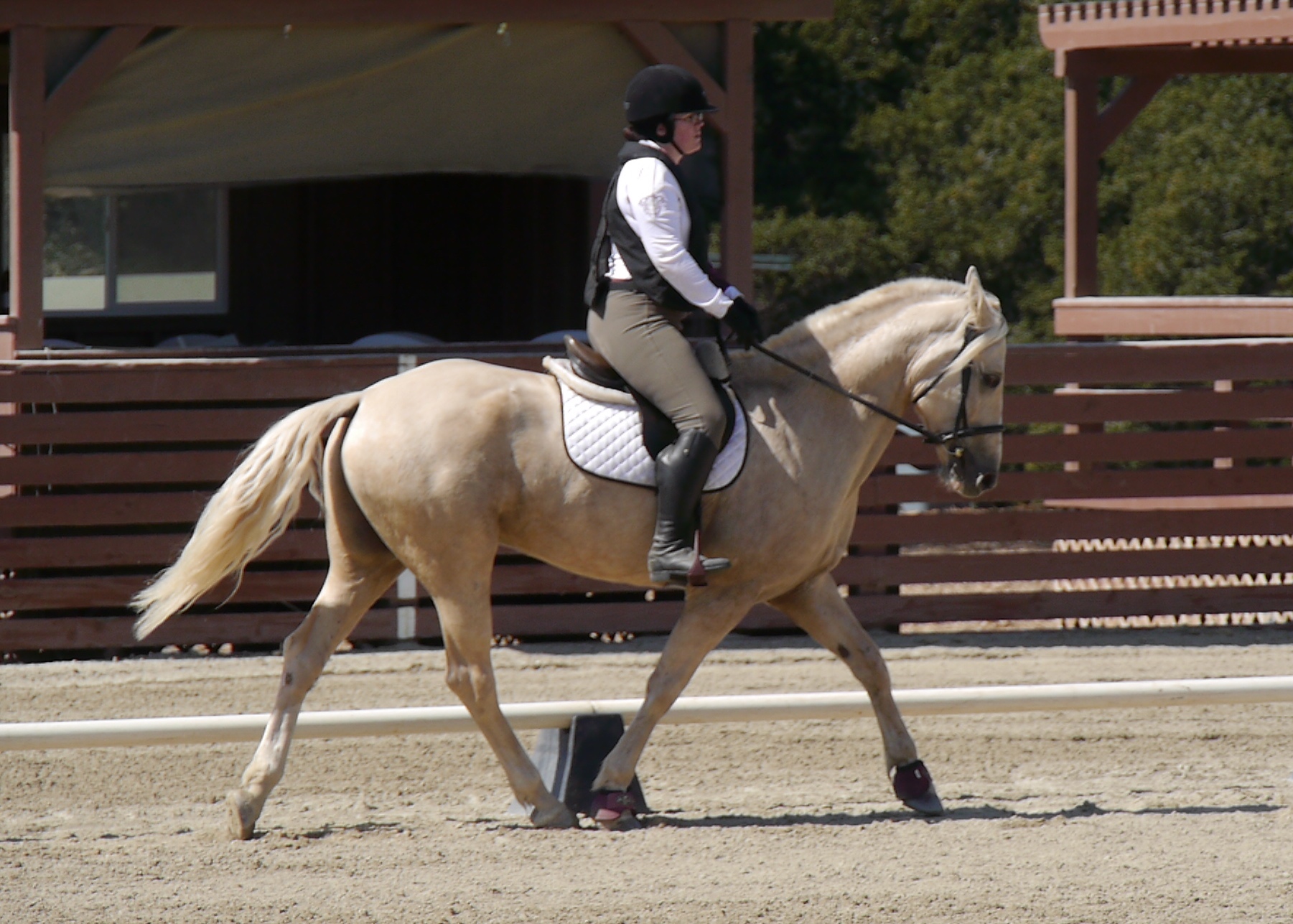 (sadly blurry) Apparently, I should have gotten dinged for wrong diagonal 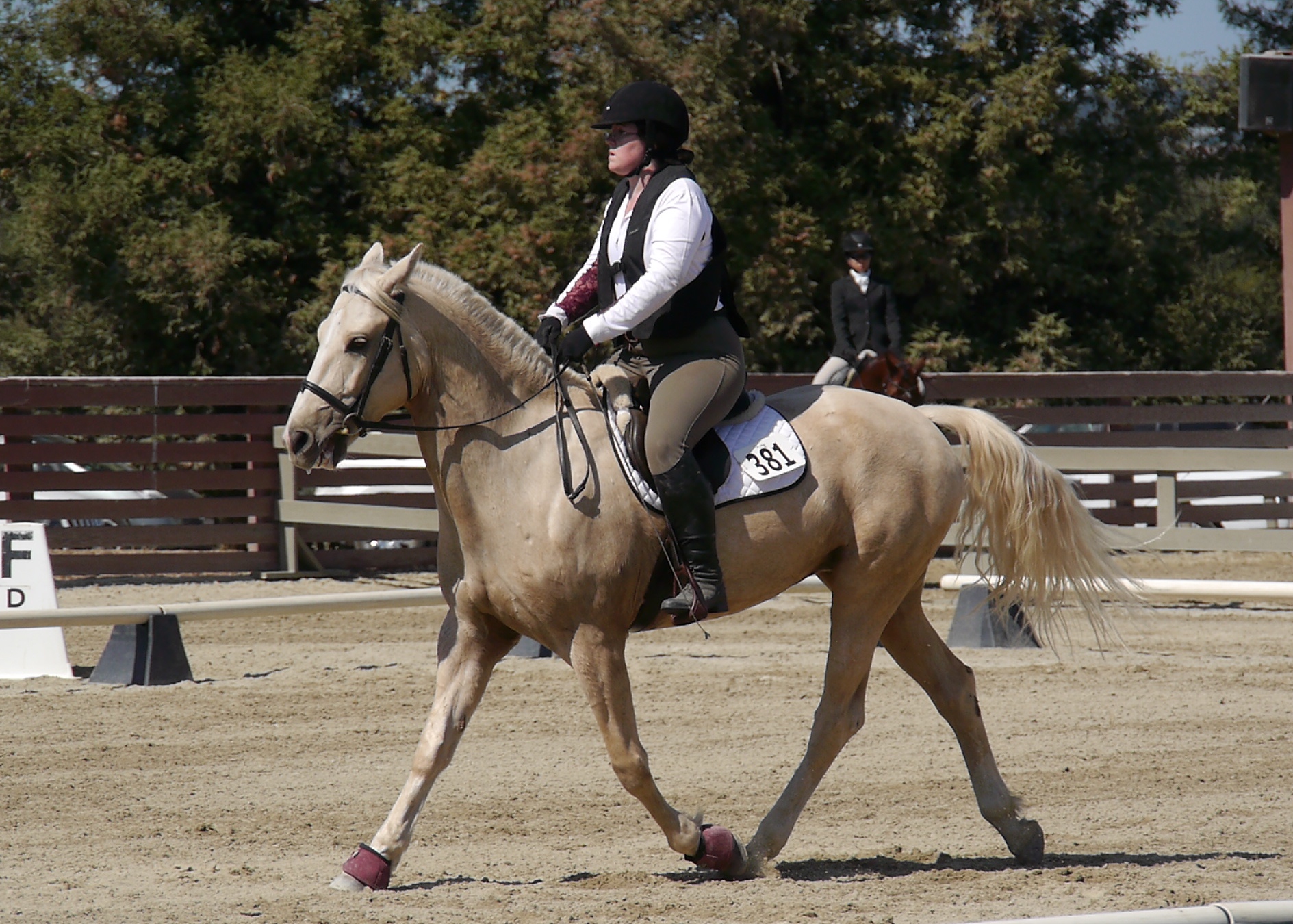 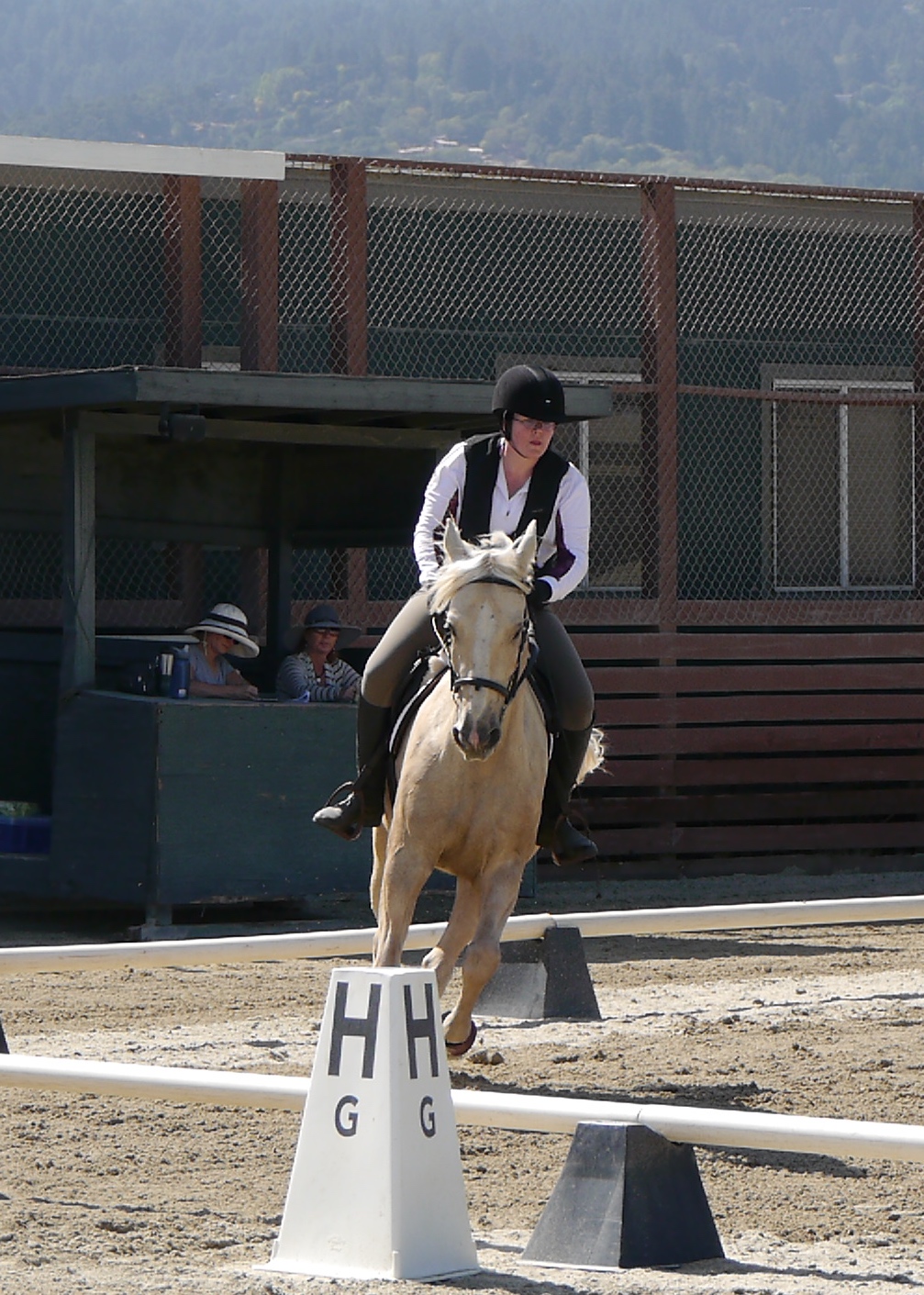 This was very obedient compared to earlier. I asked for canter, he immediately cantered. It felt a lot better than the last test. I clearly need to improve on actually going into the corner though. 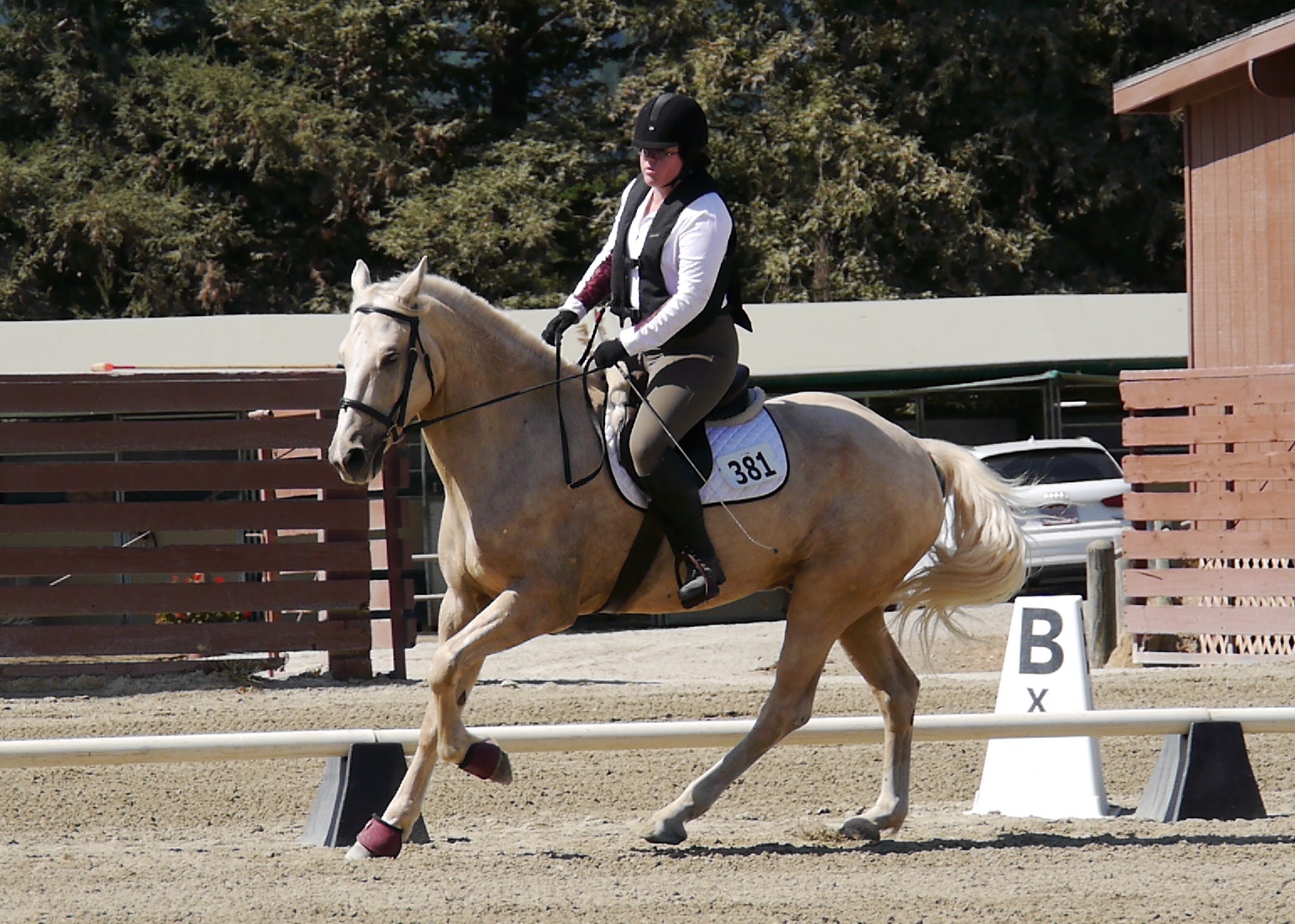 I think the bigger problem with this circle was erratic pace. 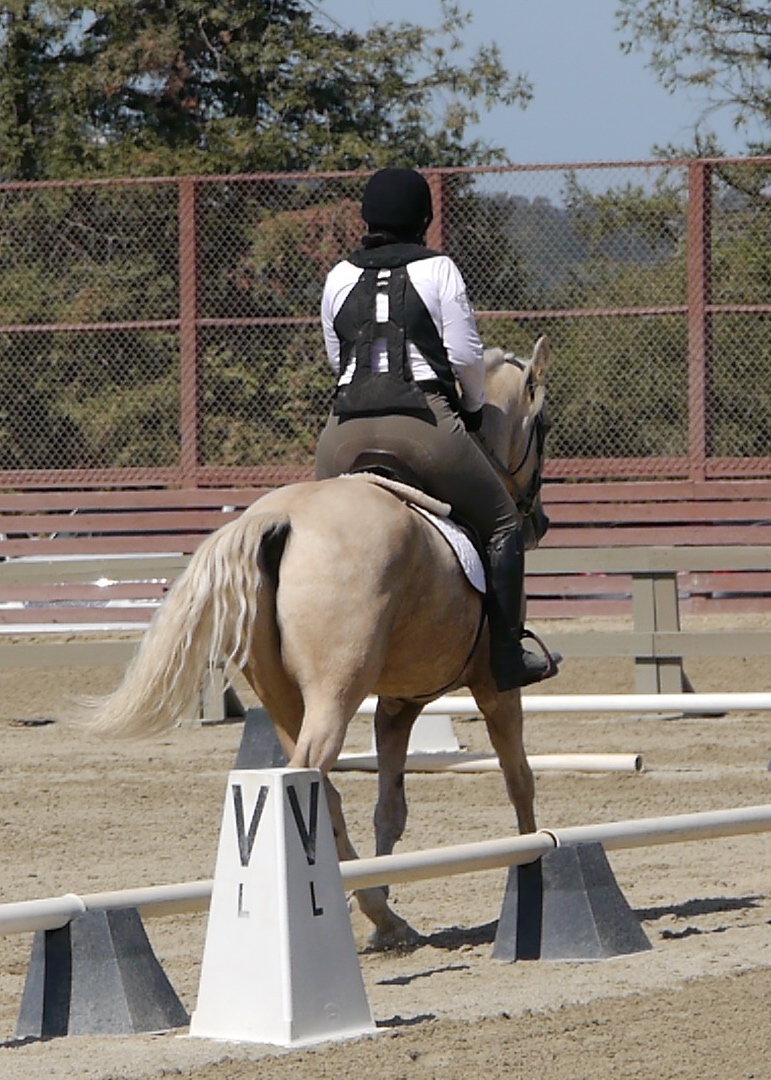 7. A: Circle left 20m rising trot, allowing the horse to stretch forward and downward.
Before A: Shorten the reins
A: Working trot
6.0: “needs better bend and connection to bit” 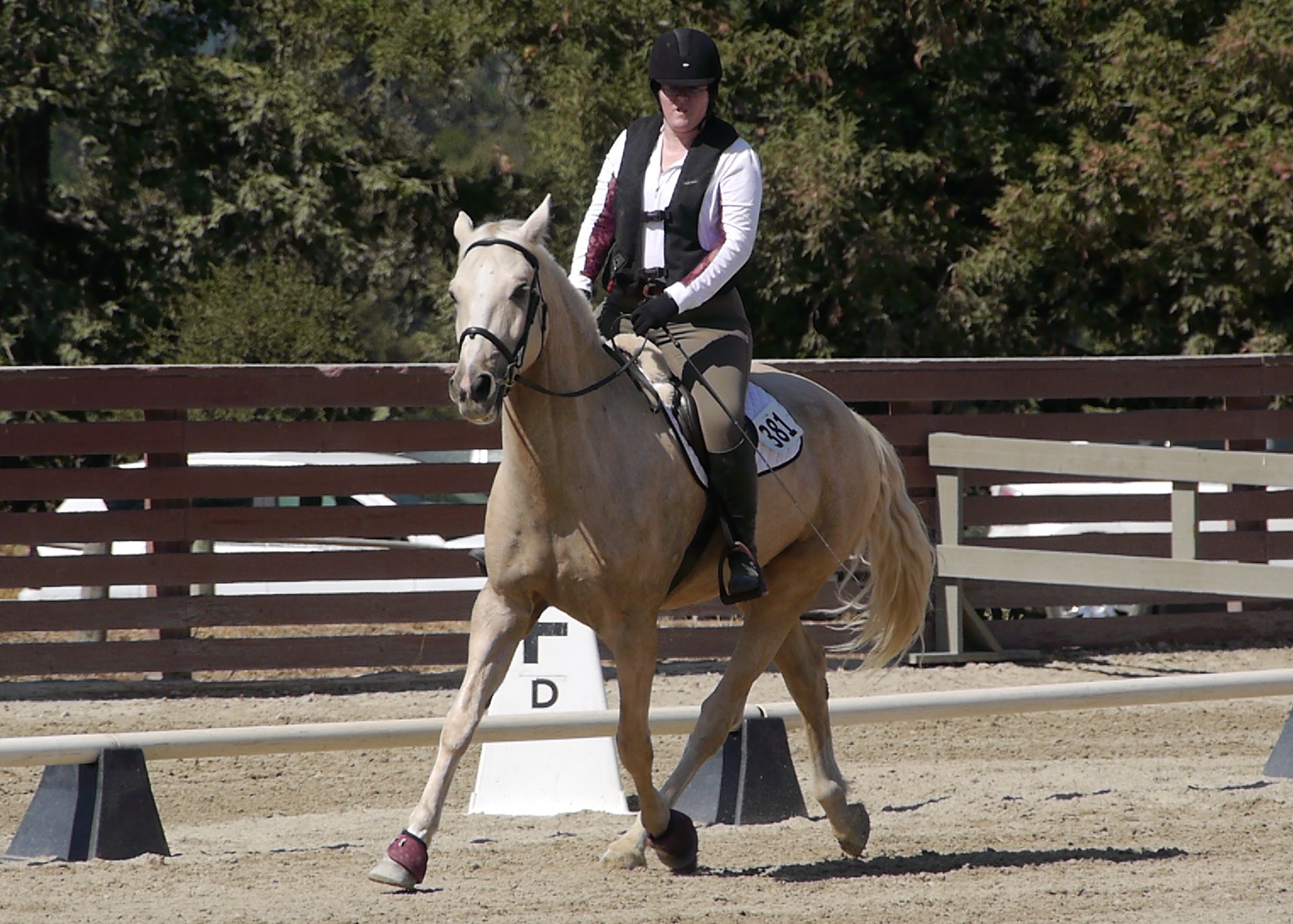 A feel like the score should have been 4 and the comment should be – no stretch shown. I also love our matching disgusted expressions. 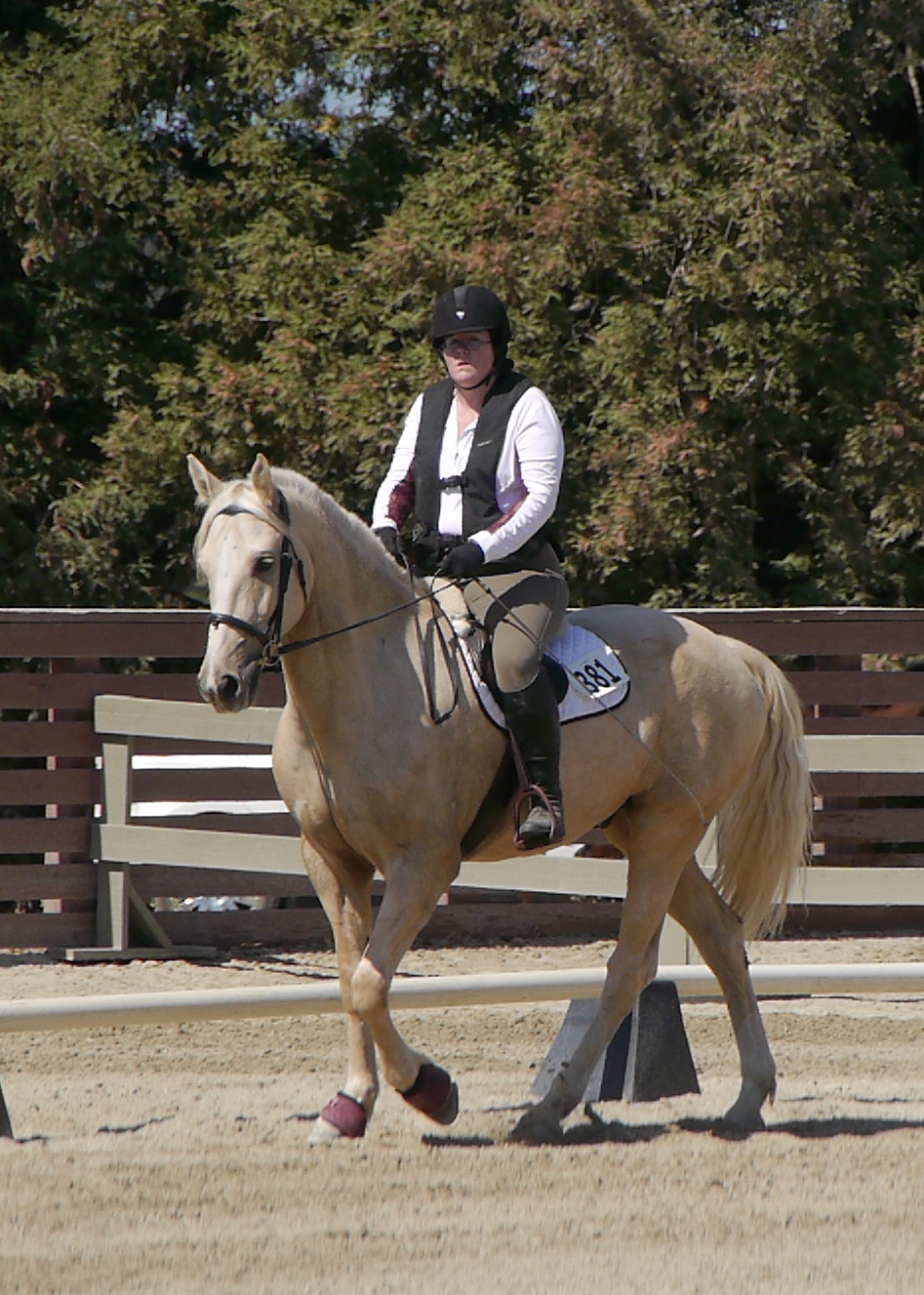 I really aught to actual practice the stretchy trot and transition down. The first and last time I did it was at a show. 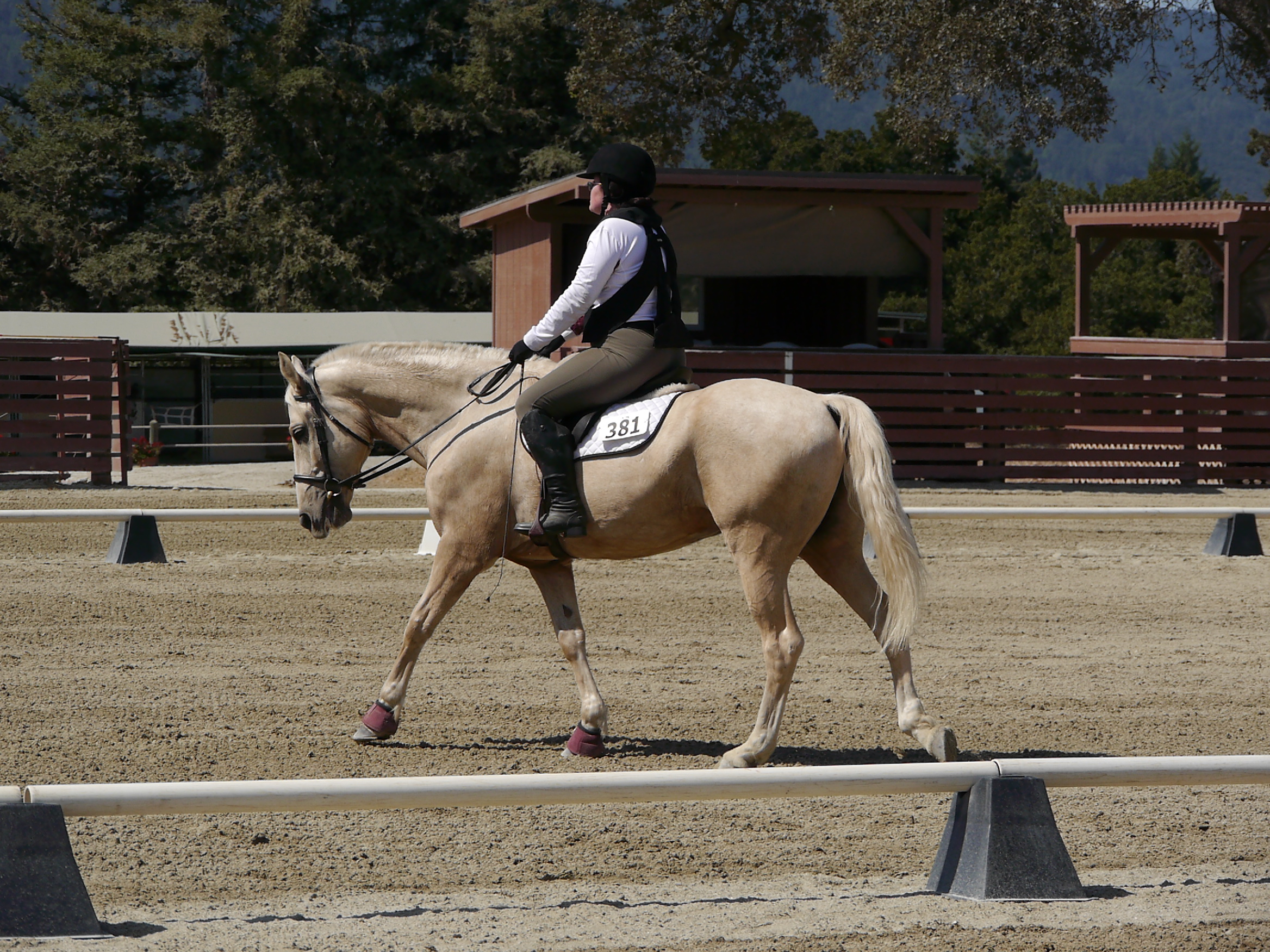 Not sure where our free walk went. We usually do better on this movement and it’s a double coefficient too 🙁 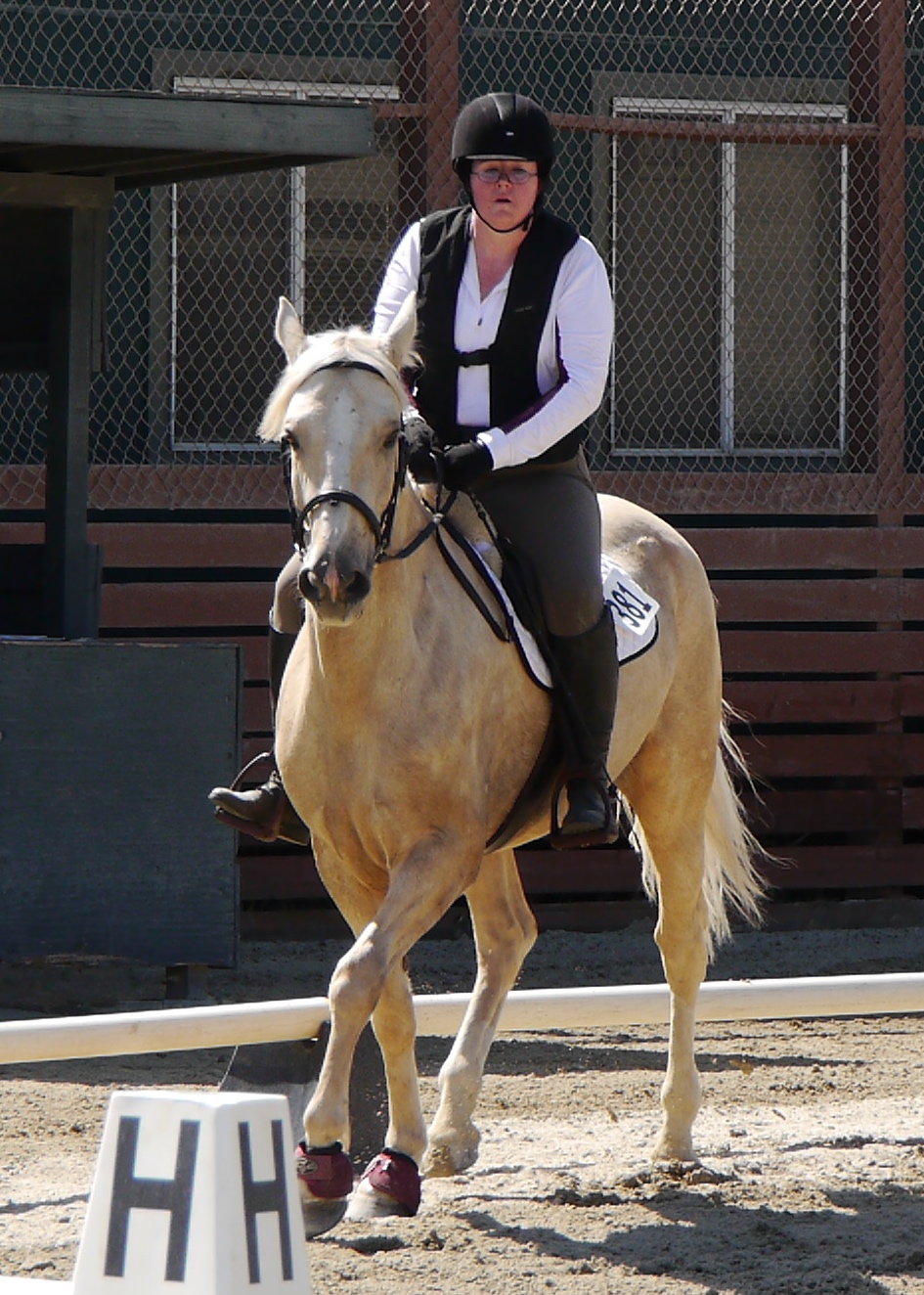 There is no connection here 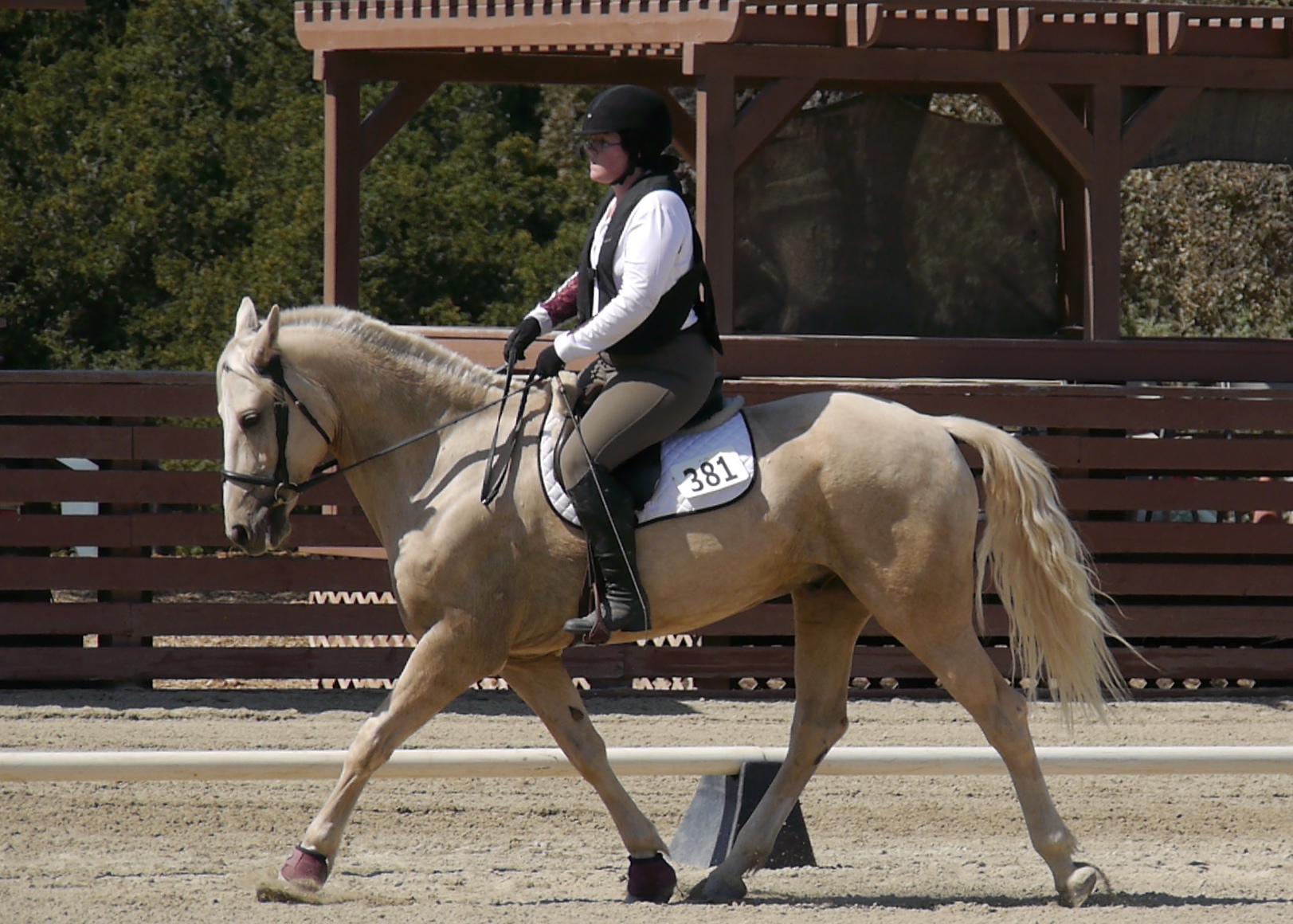 Inconsistent is true, but there were good moments 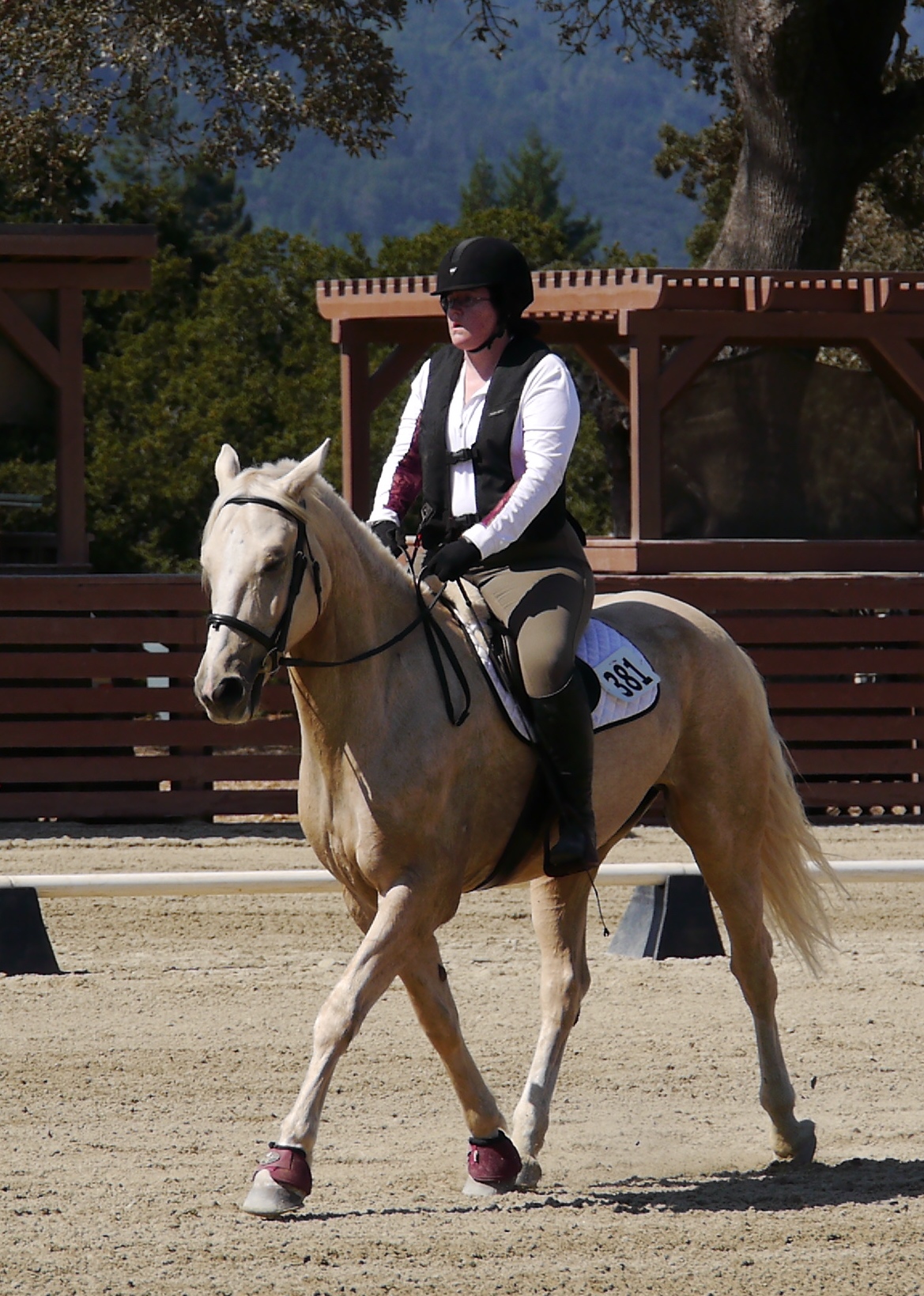 Levi’s expression says it all 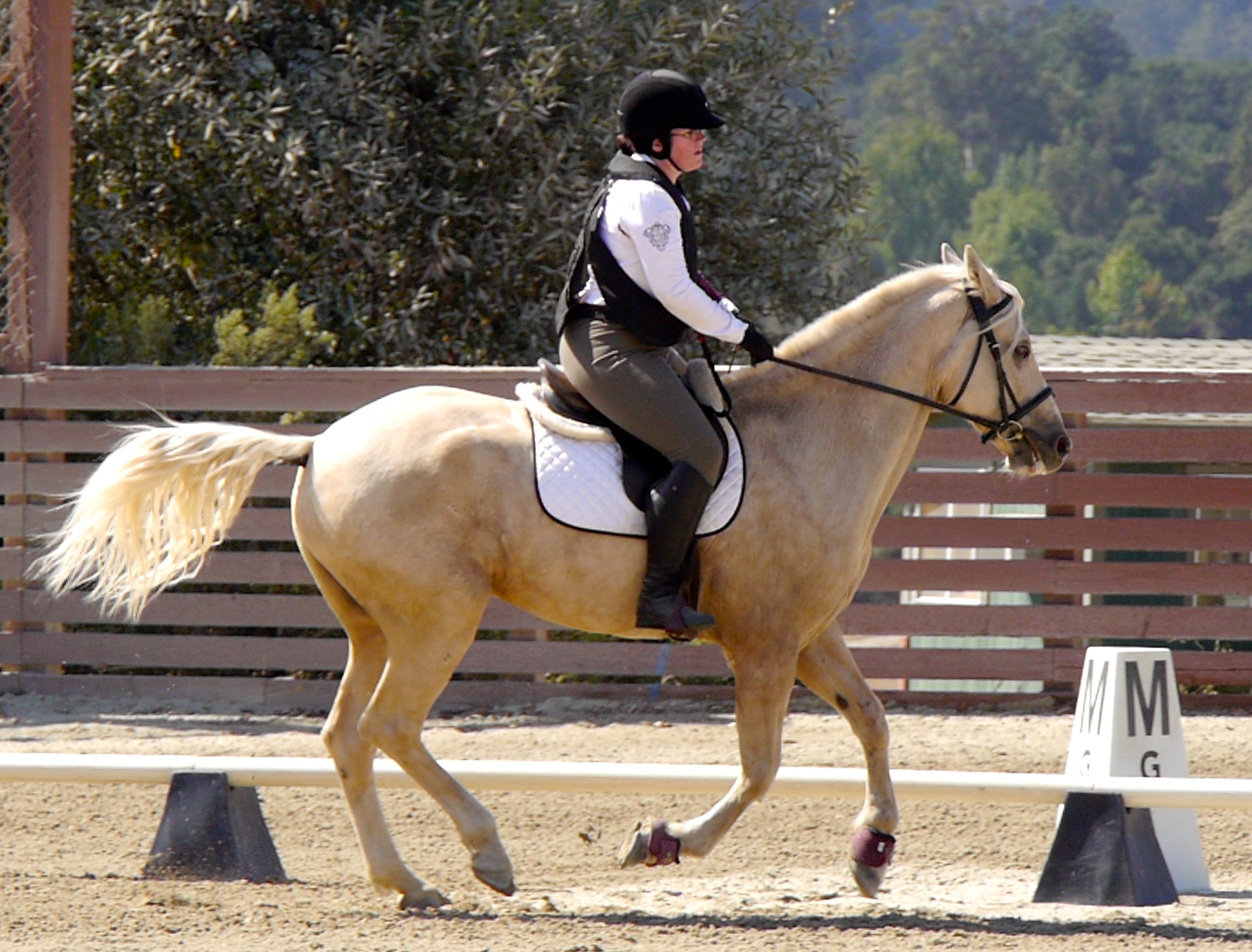 It wasn’t pretty, but it was obedient 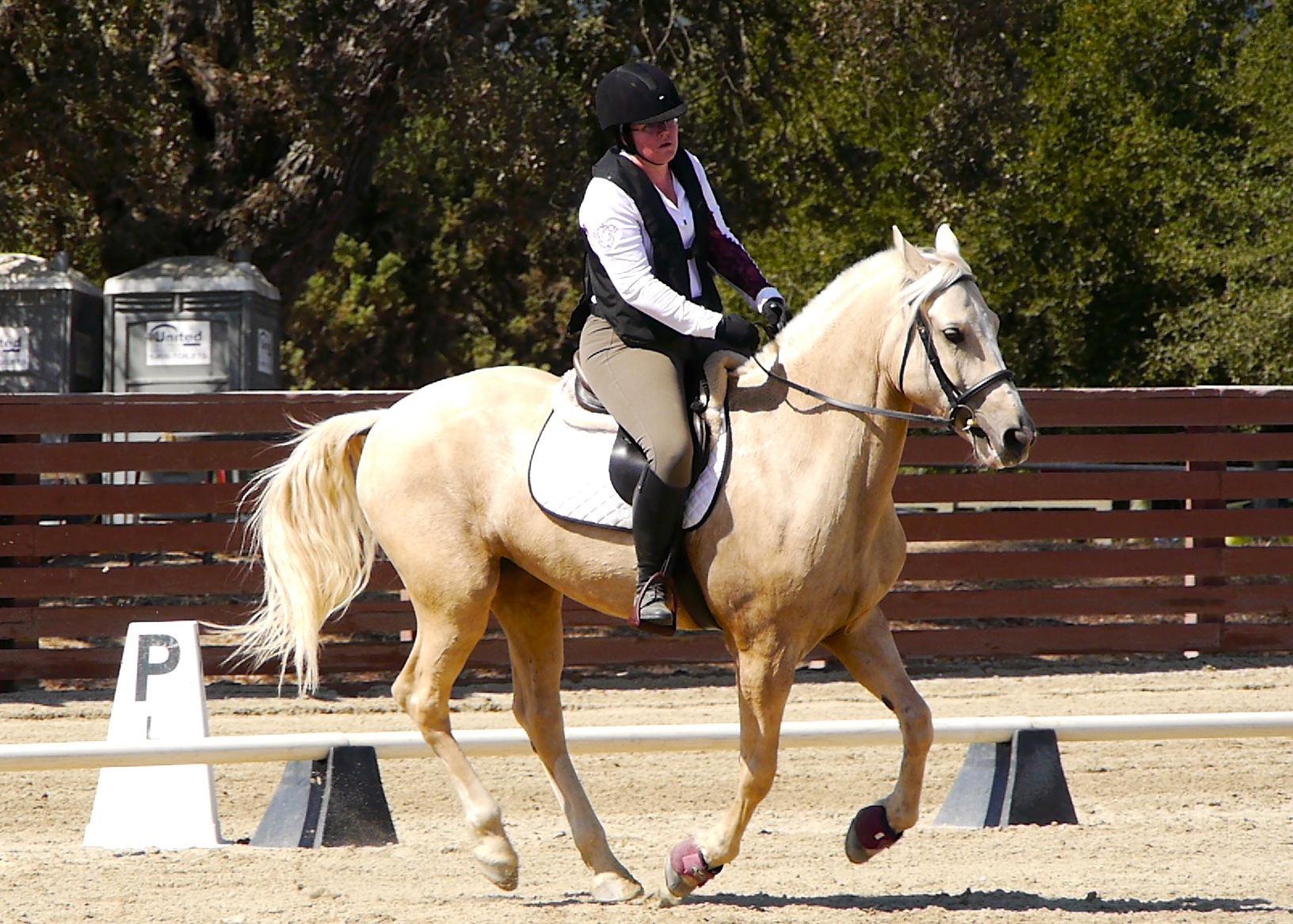 You mean motorcycling around turns doesn’t count as bending? 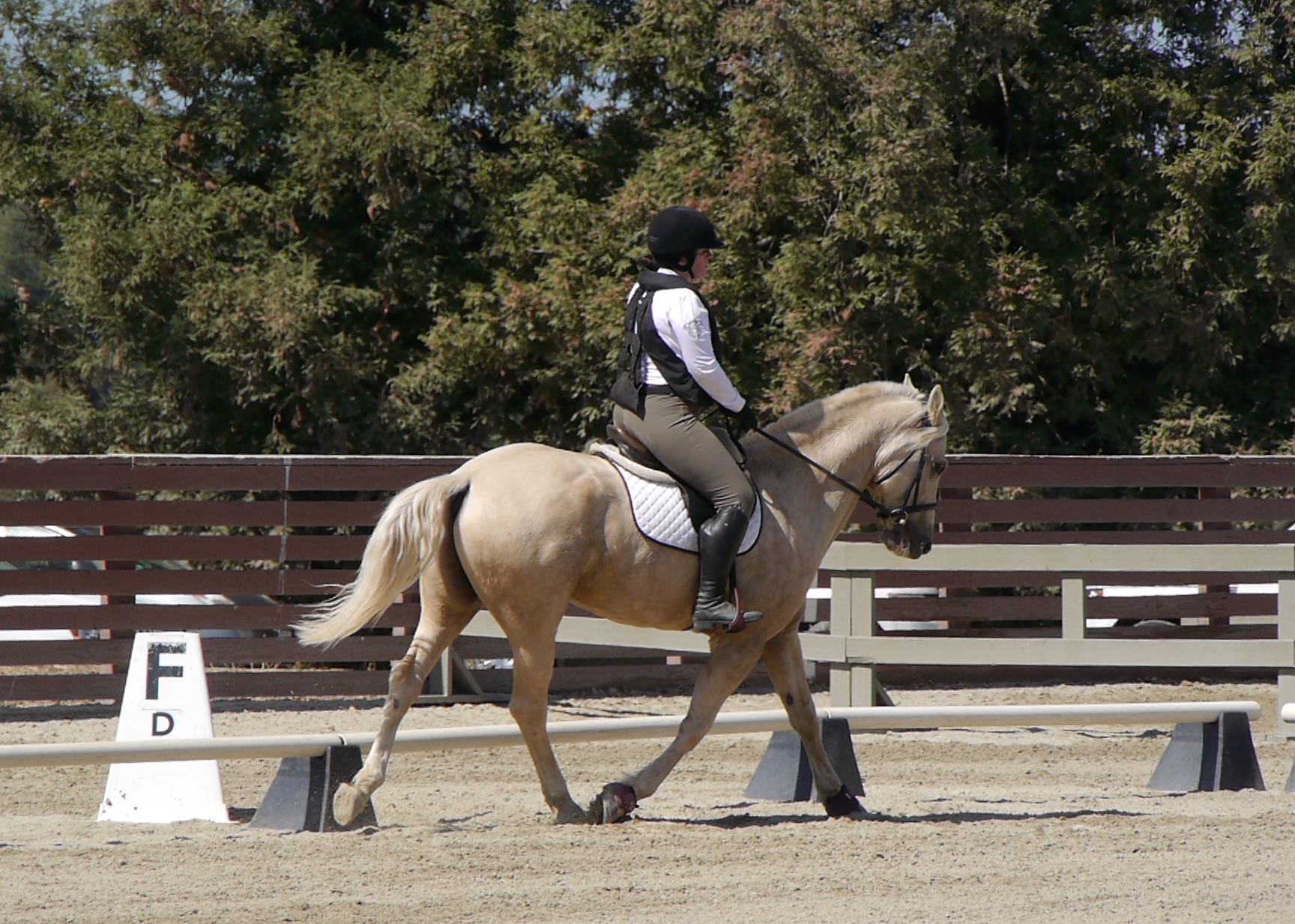 Obedient yes, but more downhill than I’d have liked. 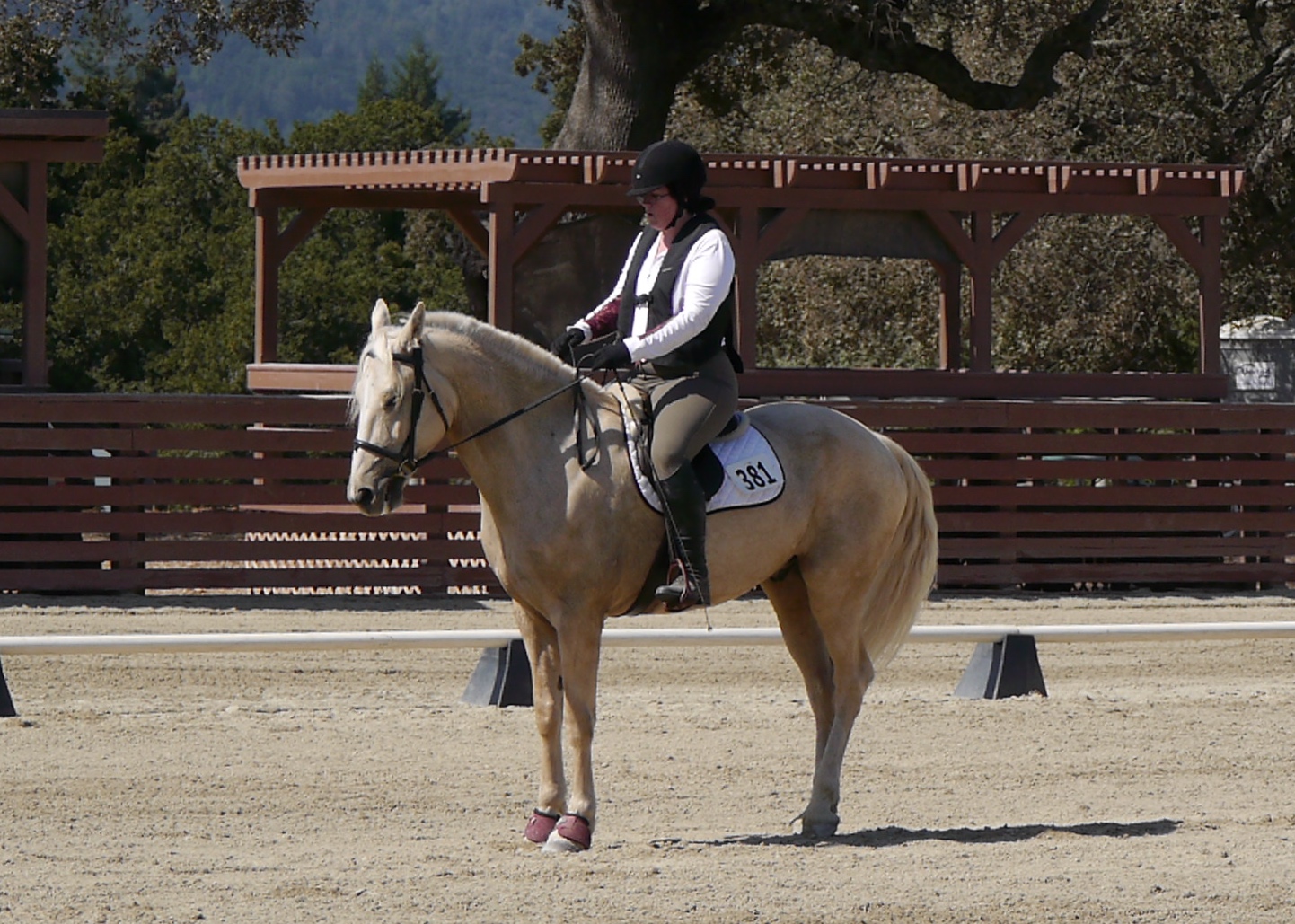 I realized I was going to overshoot centerline before I did it, but not soon enough to fix it without jerking him around the turn. I definitely need to practice this movement more. I either overshoot it or get comments about being unbalanced. I always mess it up.

This is exactly the same score I got the last time I did Training 2. I only realized that in typing up this post because I copy-pasted the post from last time so I didn’t have to retype the movements. There are different individual scores to make up the total, but the percentage is identical. Interesting. This time we ended up 4th out of 8, which I think is pretty good. The judge was obviously generous, but it was a schooling show and she was generous all around so 4th out of 8 is pretty good to me.

We obviously have a lot more to work on, but I am glad we went to the show with the plan of purposefully failing that first test. I think Levi really needed that correction to realize he couldn’t get away with misbehavior just because we entered a dressage ring.