I didn’t ride on Tuesday as I was not going to get anything productive done in the treeless saddle. Nilla’s not really well behaved enough to do anything other than walk if I rode bareback and I really didn’t want to pay for a walking lesson. So I took my husband’s camera up to try to get some better pictures of him riding. He has a nice DSLR in comparison to my point and shoot. Unfortunately, I rarely use the camera so I didn’t know it had “intelligent auto focus” on. This focus really thought the jump standards or the saddle needed to be in focus instead of heads or legs. So a lot of my pictures of blurry 🙁 But Shasta is awesome so I’m still sharing…

They started with a grid exercise. All the poles were set for canter first. 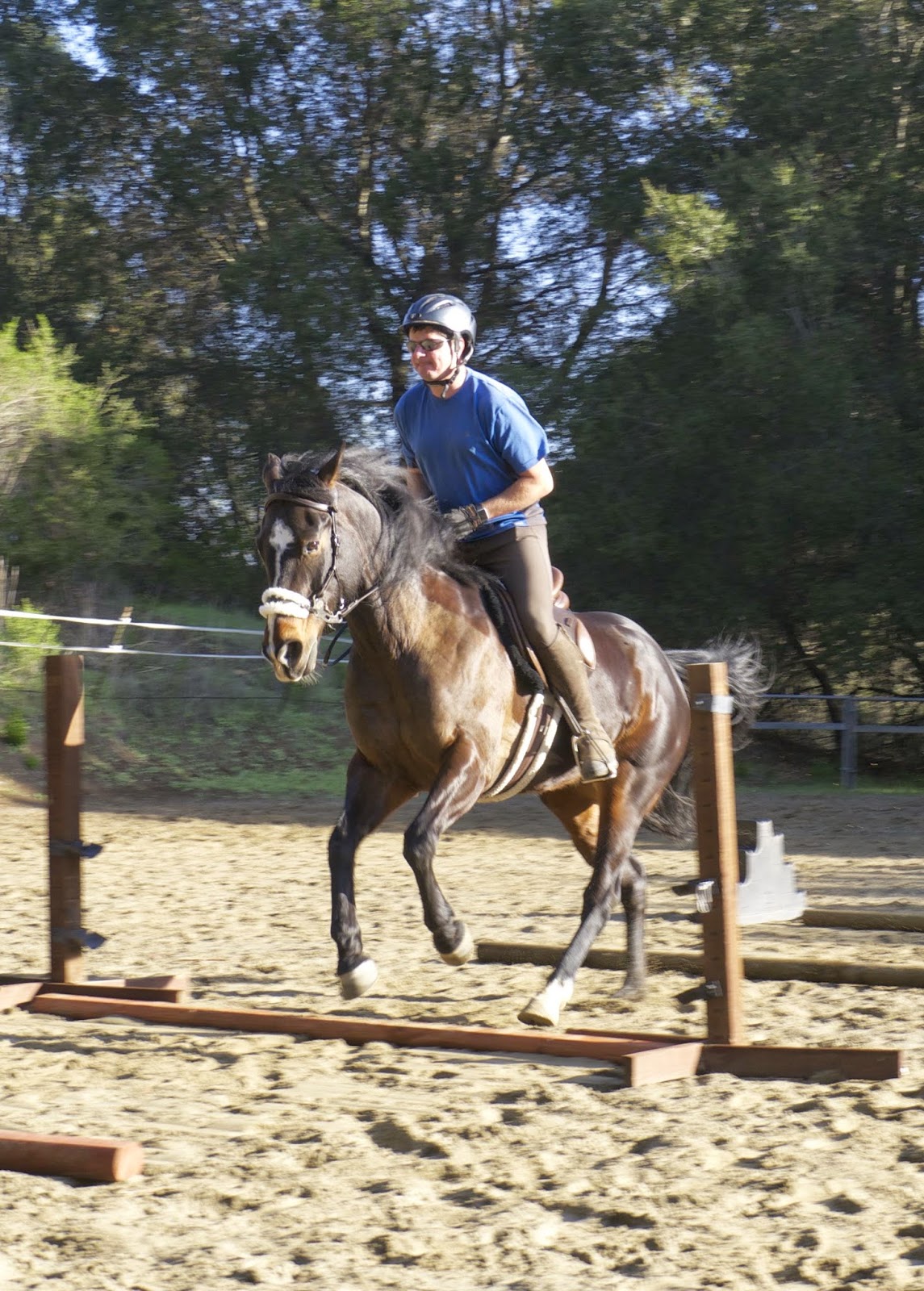 The a small x was placed 1 pole away from the end so there was still a pole  after the jump to keep Shasta minding her feet. Shasta thought this jump needed to be a lot higher to be interesting so she jumped it like it was a lot higher… 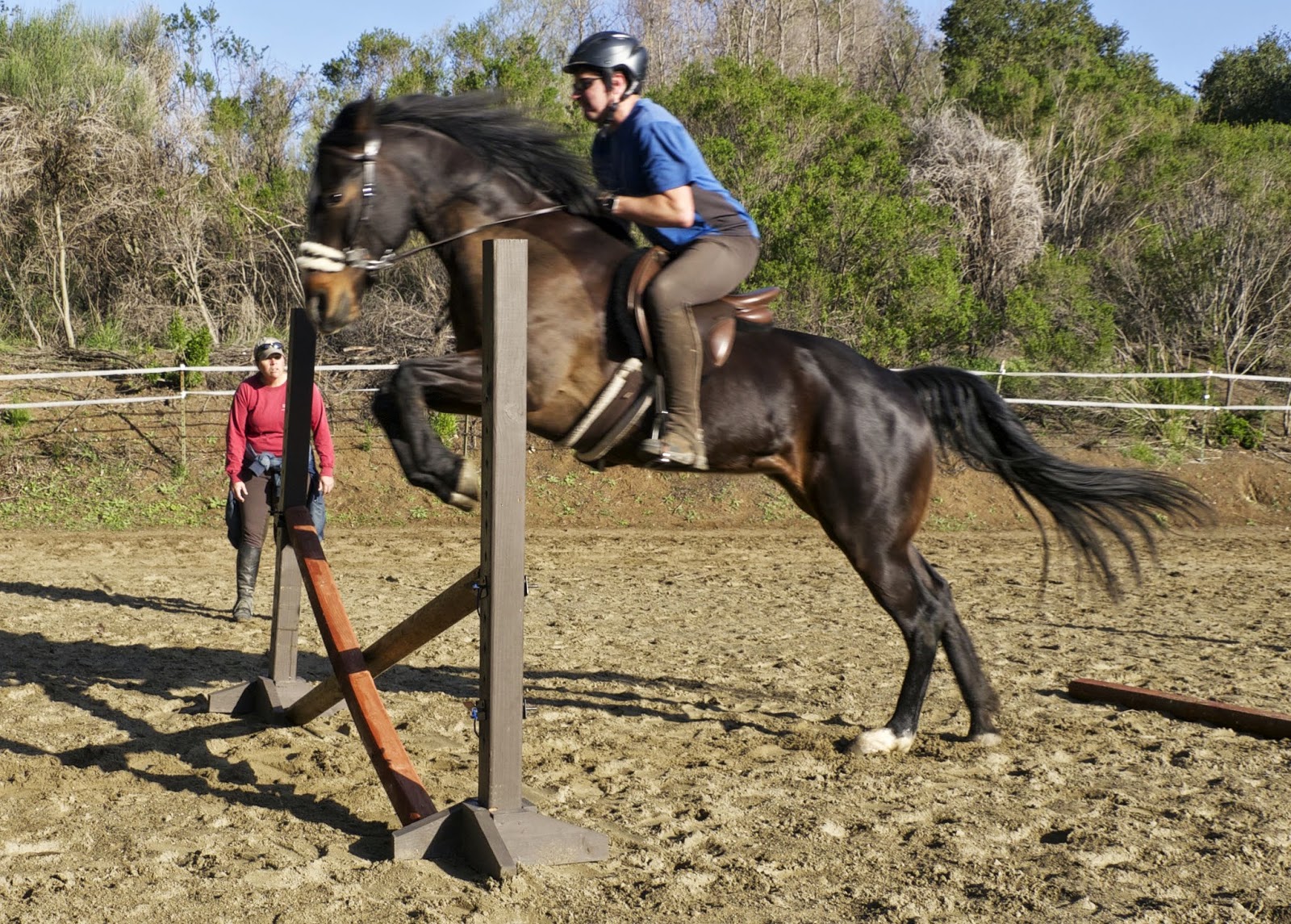 A close observer may be noticing the bridle Shasta is wearing. I put my PS of Sweden hackamore on her. I’m coming to the determination that I just don’t like the fit of this bridle. Shasta is an honest cob size and the browband is sitting like 3 inches off her forehead. It’s just huge. I also couldn’t get the nose part on her so I stole the curb chain off a different bridle which annoyed me from a non-matching perspective. I love the leather quality and I love the sheepskin noseband, but the fit isn’t working for her.

They did the line a bunch of times. The goal was slow and steady to the jump. This involved a lot of half-halting. The hackamore did her keep her from trying to drag him down to race. A second jump was added in the middle. 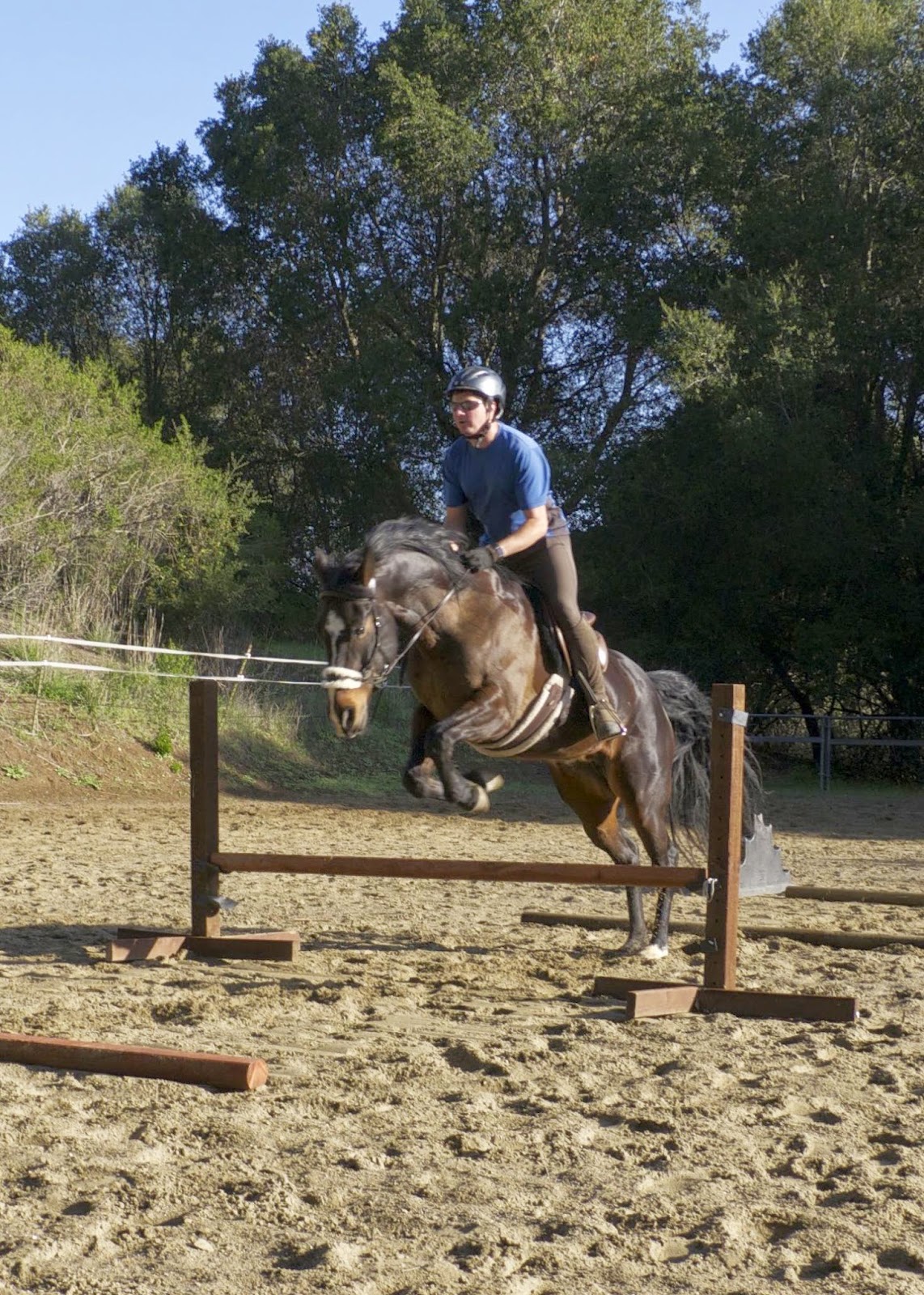 A third jump was also added to the beginning of the grid, but I didn’t get a picture of it. She eventually started jumping the final jump like it was the correct size, so it was then raised. 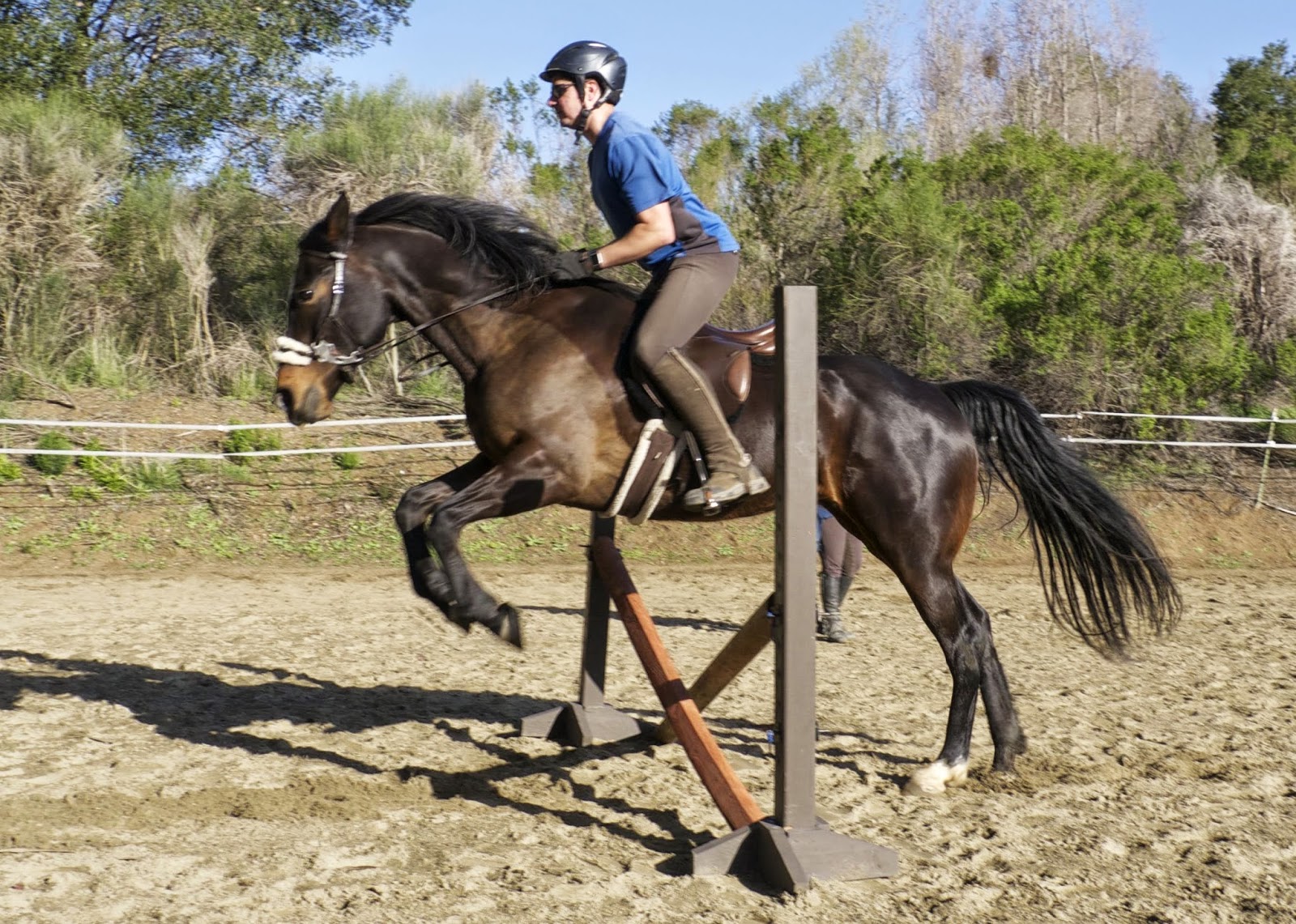 Unfortunately, this is the point at which I started getting really frustrated with the pictures I was getting and started playing around with the settings. Since I didn’t know the stupid “intelligent focus” bullshit was on, none of these changes were for the better. 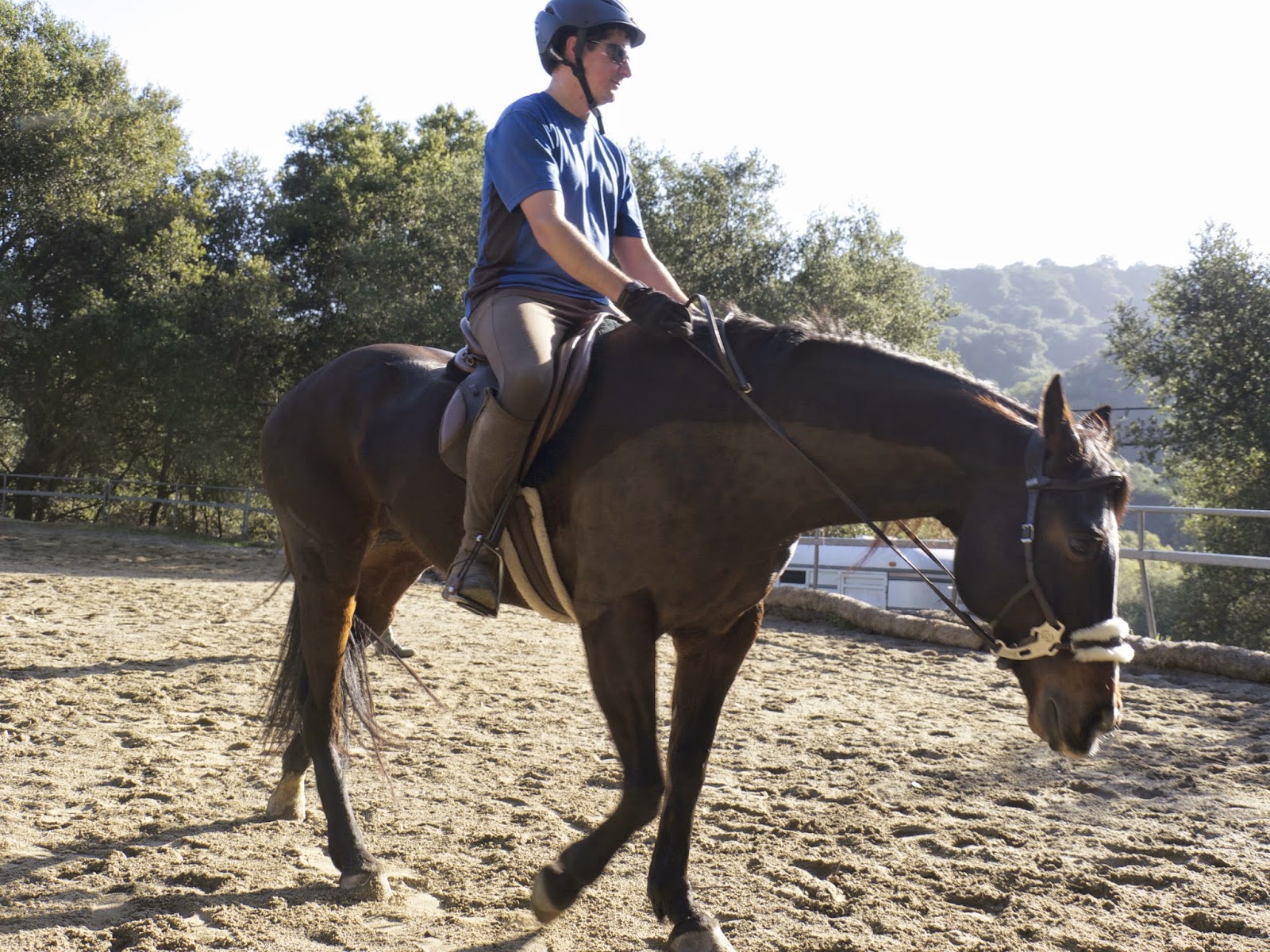