Our barn used to have chickens, which I really loved because they were cute and laid yummy eggs and you could play with the chicks. 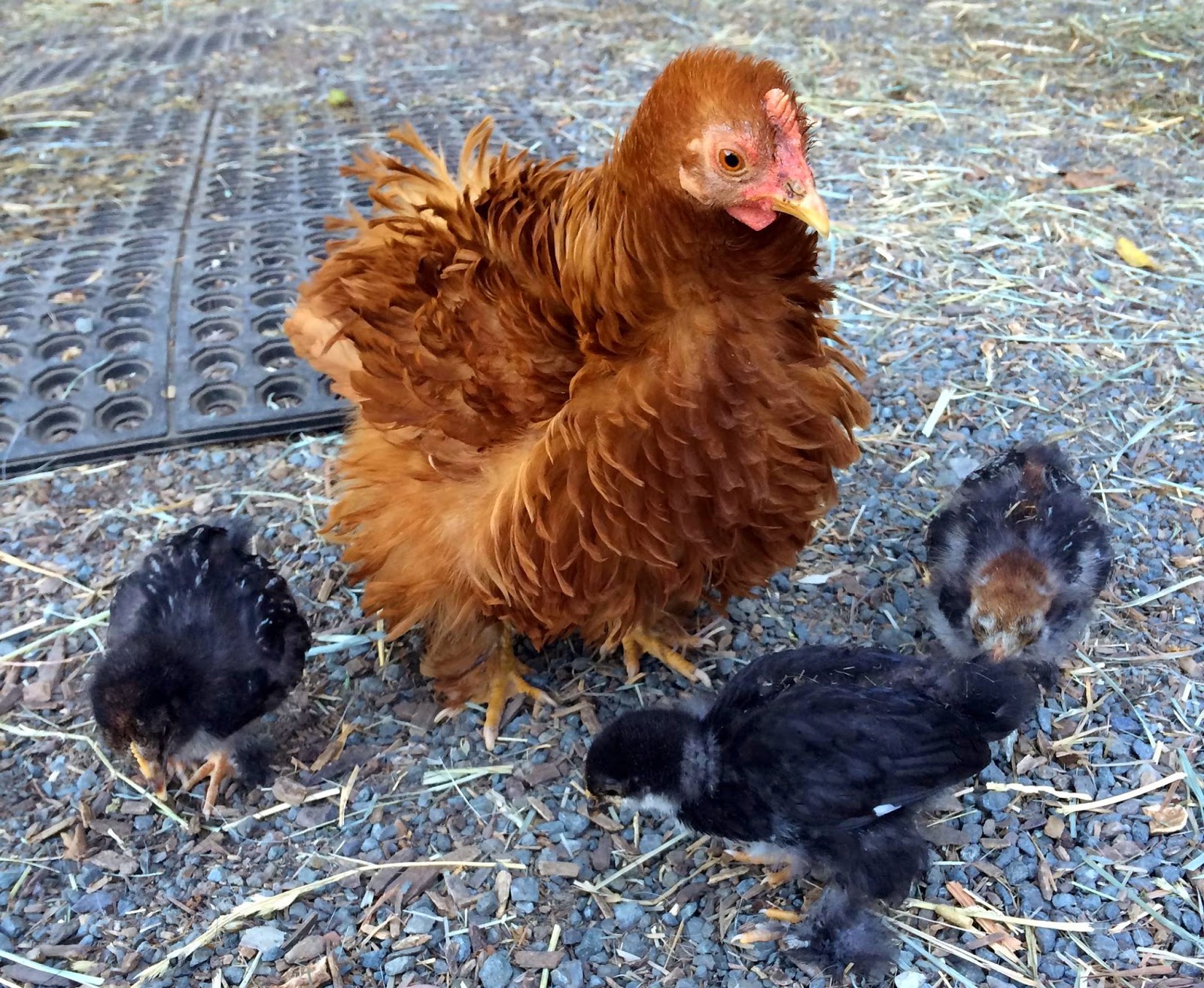 You could also dress them in halloween costumes. 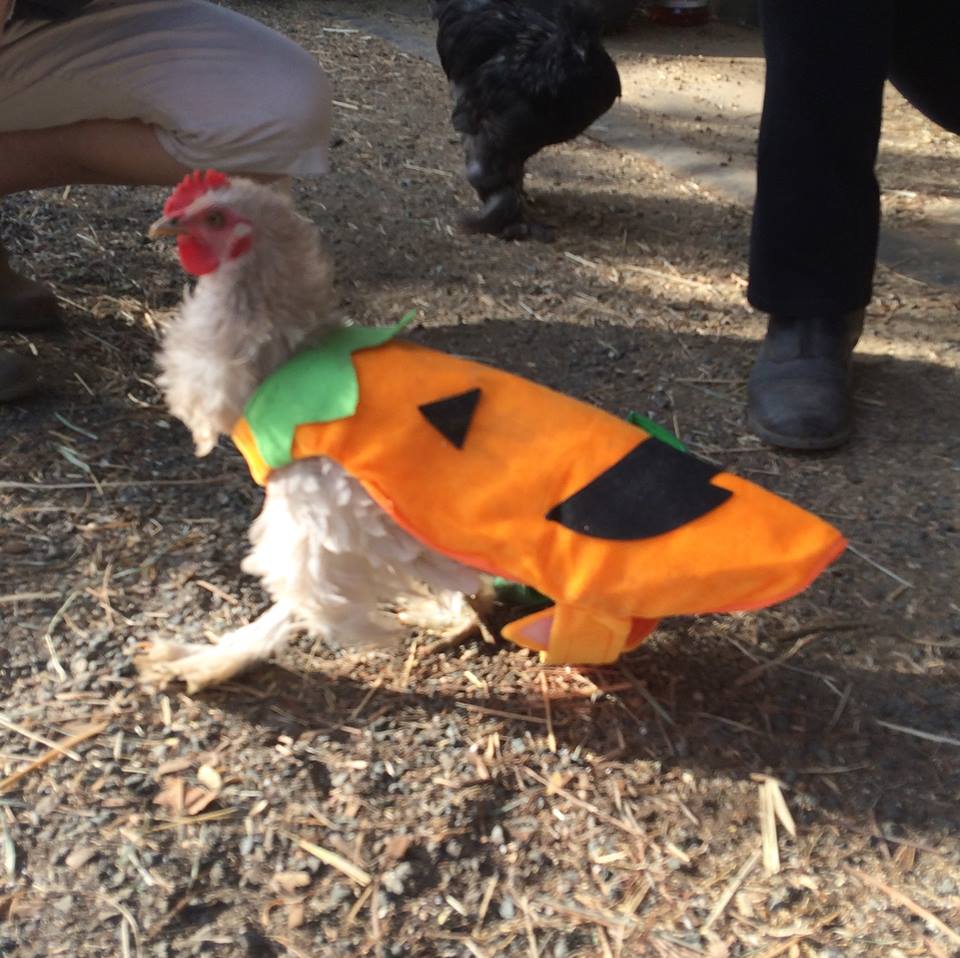 Sadly, all of our good egg-laying chickens were killed by raccoons a few years ago. The replacements turned out to almost all be males and ended up being given away because all they did was crow and fight and provide no eggs for all their annoyance. This last year, our barn owner kept saying she was going to get chicks and it kept not happening. 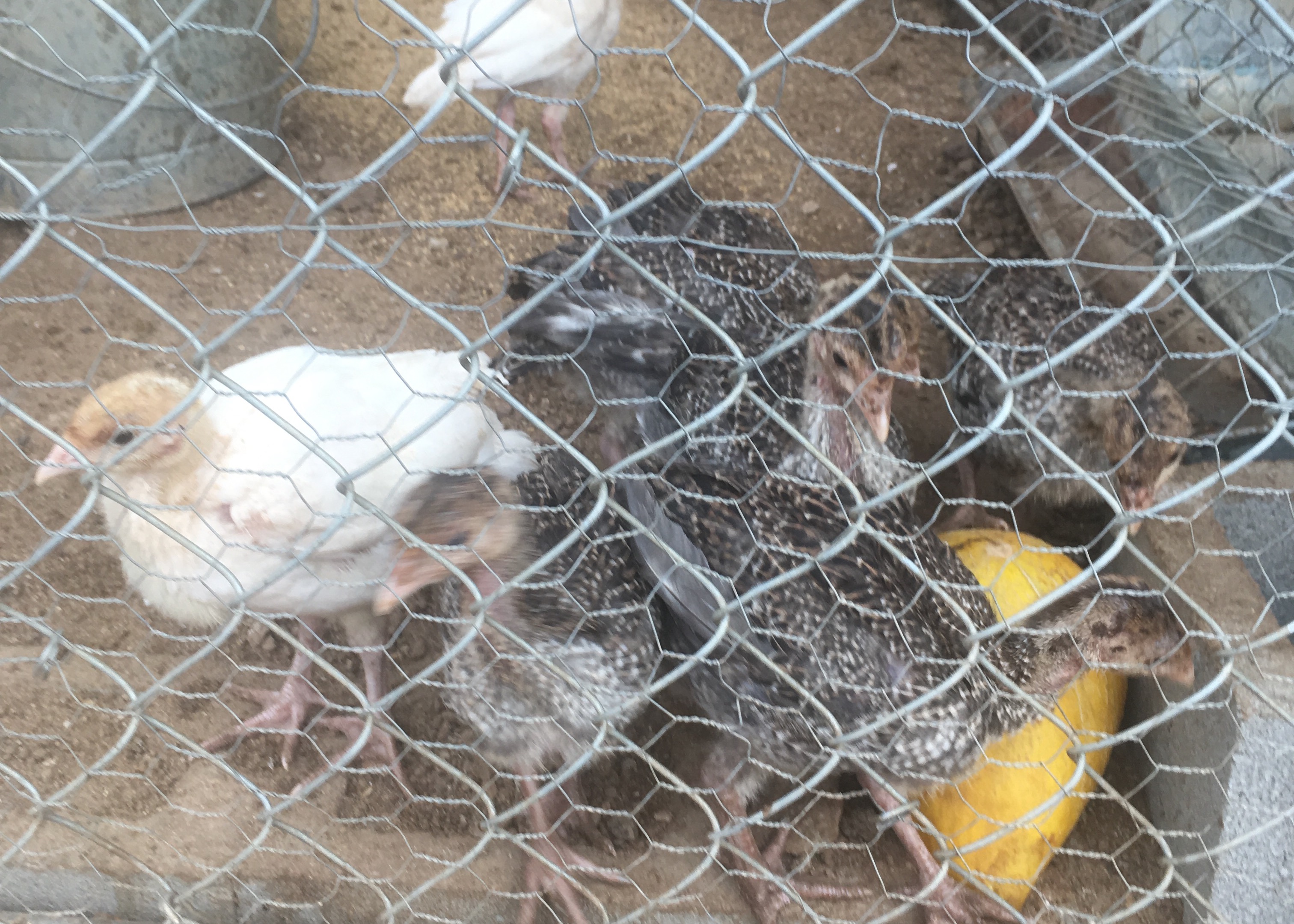 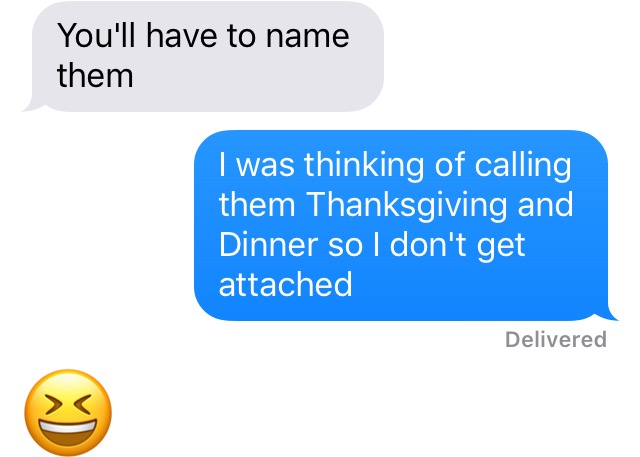 Texts with my barn owner

My barn owner said the males were friendlier than the females, but the guy selling them didn’t know their sexes, so we just picked the 2 that were the easiest to catch. 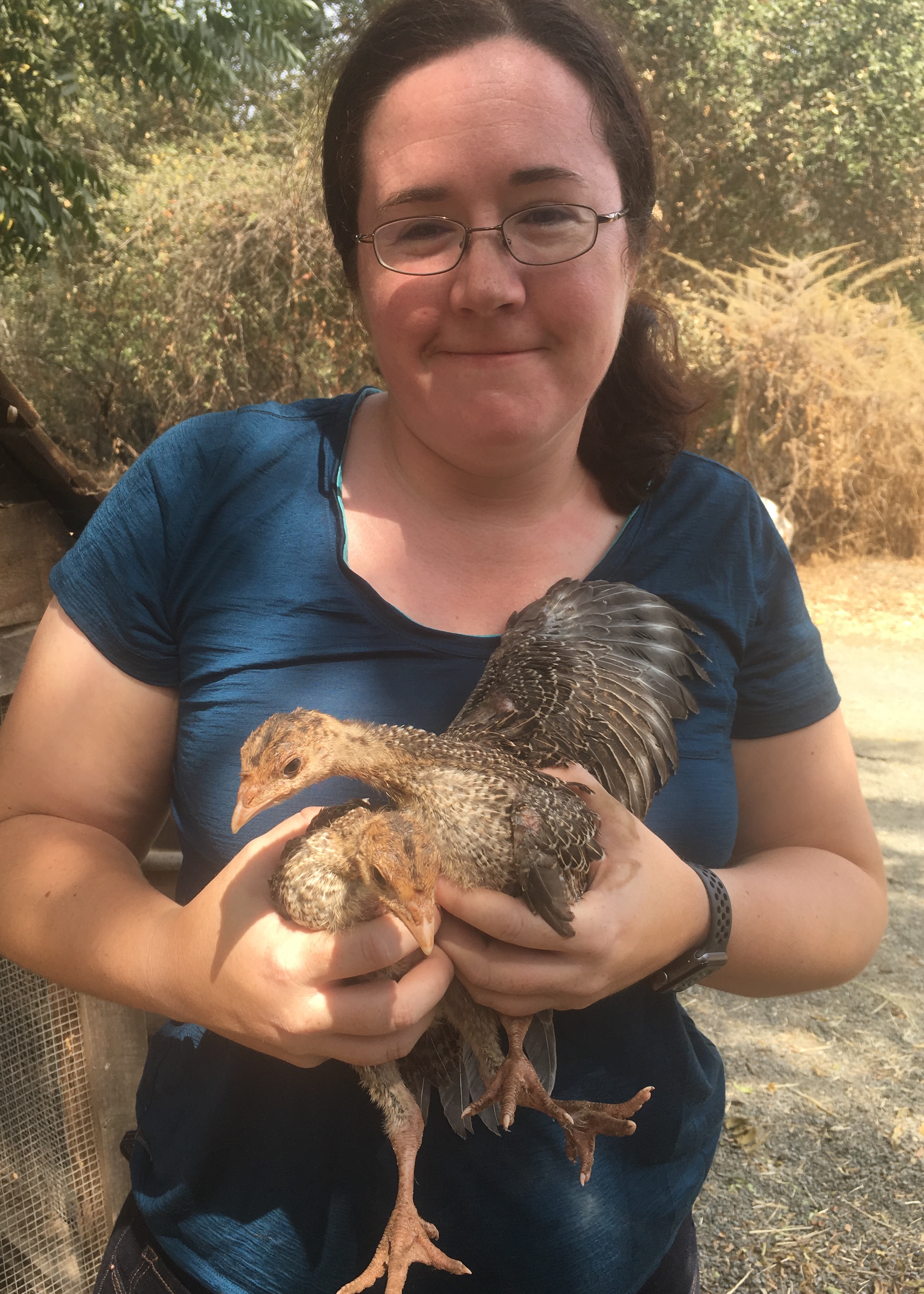 Back at the barn, we set up the old chicken coop with bedding and food and water. We had to buy a few supplies over the last week, but we’ve got most everything for them at this point. 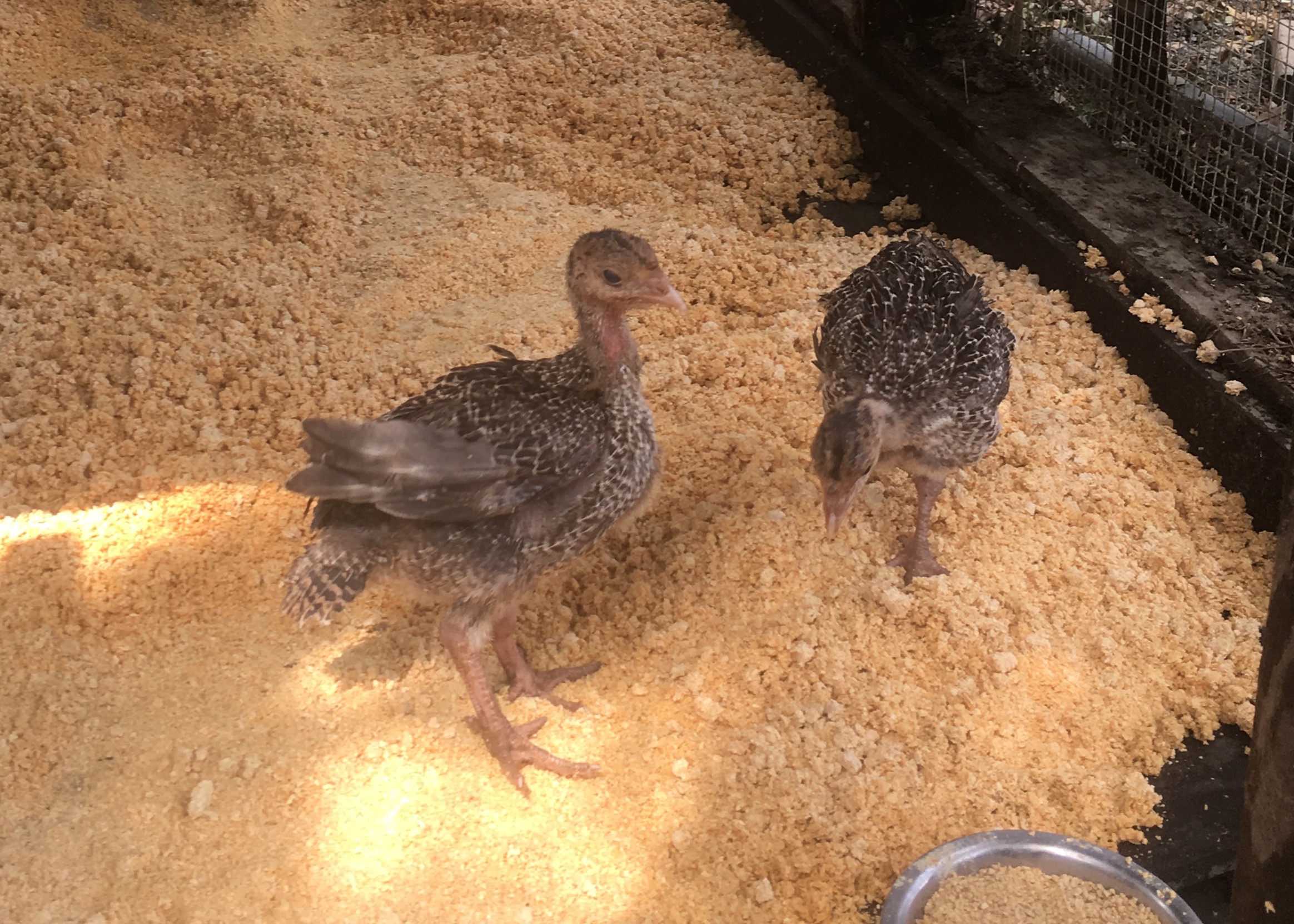 They were only 4 weeks old when we got them and the guy said they’d been outside without a heat lamp. I was really worried they’d die though because the articles I was reading said to keep them under a heat lamp until 8 weeks or so and that baby turkeys are very fragile and die really easily from disease and cold and basically everything. So I didn’t even bother posting about them here because I kept expecting to show up the next day and find them dead. That could still happen, but they’ve made it a week so I feel a little safer about introducing them on the blog.

The only real problem is, they’re ridiculously friendly. That’s a problem because I’m a sucker and I don’t know if I can eat these things if they’re gonna act like pets instead of vicious attack beasts like all the turkeys I’ve met. Not that I’ve met a lot of turkeys, but still. These two just follow us all over the place and come running over any time you go past their cage.

They are, however, insanely stupid. One of them walked into Nilla’s stall, then started alarm peeping/crying because it couldn’t figure out how to get back out. The door it walked in was still wide open. They door to Nilla’s paddock was wide open. There were multiple avenues of escape that are big enough for a mule to fit through and the turkey was stuck. I walked over, the turkey saw me and then came running over to escape. I have watched them get “stuck” on the other side of their open cage door. Like, just go any direction other than forward and there is nothing there. You just have to turn. 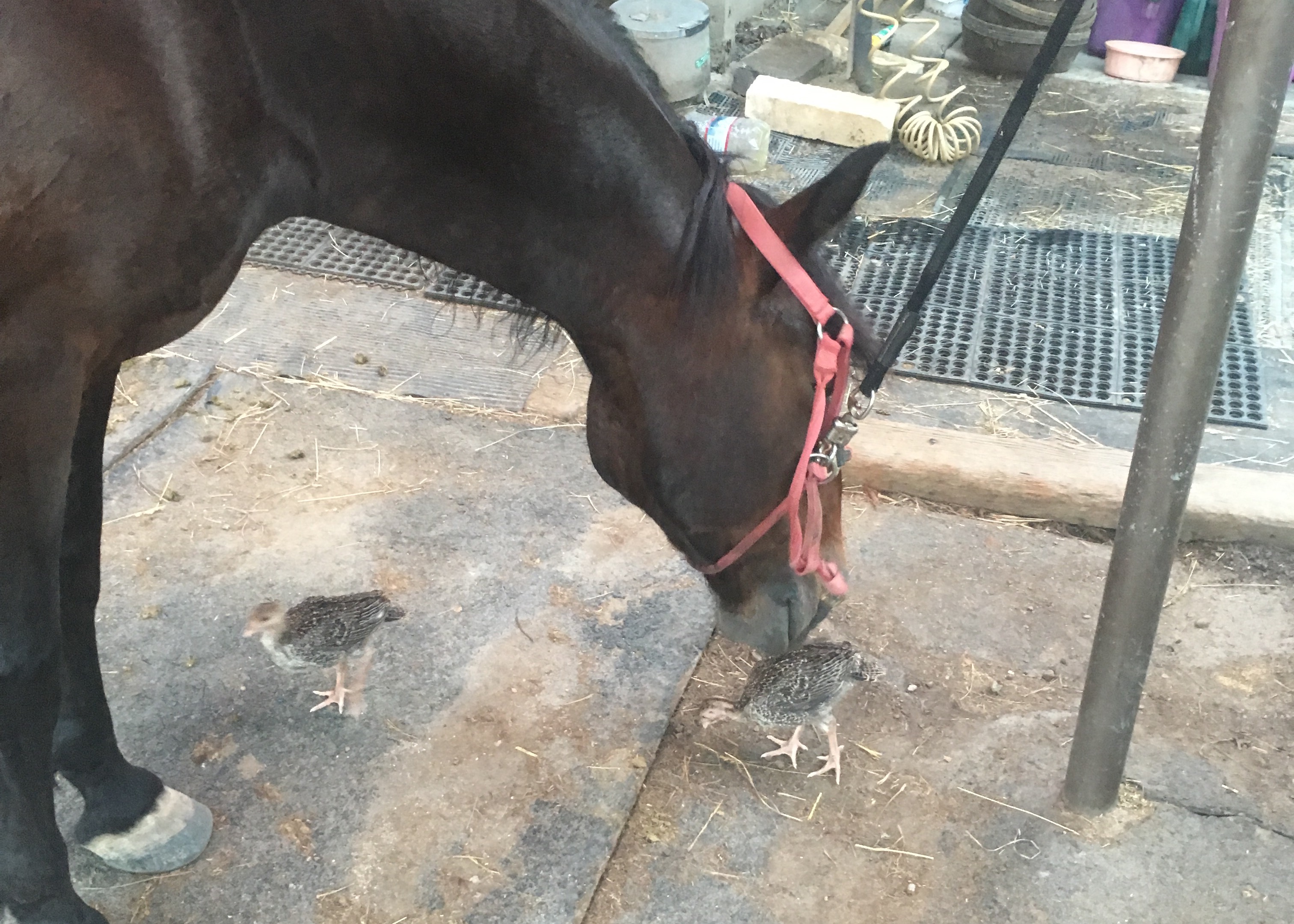 Apparently humans have messed domesticated turkeys up so much that they can’t survive more than 2 years as they get too big for their bones and will actually crush themselves to death. So eating them is better than that. In theory. I don’t eat red meat for ethical reasons; I gave that up a long, long time ago. But I do like eating turkey. And these turkeys will at least have a nice life running around the barn (the cage is only until they’re a little older) and eating good food instead of living on a factory farm. I dunno though. I’ve never raised my own turkeys. We’ll see if it actually happens.

Has anyone ever raised turkeys?