The Beginner Novice divisions were originally scheduled to do Dressage, Stadium, and then XC. Because of the weather, they swapped the Saturday and Sunday events so that the more advanced divisions would do XC on Sunday and give the tracks more time to dry out. Of course, that meant BN (and Novice and Training) had to do XC in the mud. We had tapped Eugene for studs at his last shoeing, but we’ve never used them on him before and really didn’t want to try them for the first time ever at an event. But the footing was looking like we might have to.

When we walked the course on Friday after dressage, the lower field was a terrifying skating rink of wet clay. I was literally slipping and sliding just trying to walk. The ground outside of the tracks had ground squirrel holes so it wasn’t safe to run off the tracks either. When we were walking towards the start box, my one foot fell through a tunnel and dropped 6″. Luckily, the upper field was in great shape. We decided to walk the lower field again on Saturday morning and see how it looked. I have to say, the venue did an amazing job of fixing the footing. They were out there with drags and truckloads of sand for hours making the tracks as safe as possible.

When we checked the footing on Saturday, it was much better. Eugene is incredibly surefooted. With the improved footing, we decided not to use the studs. Since he’d never worn them before, we were worried about him not knowing why his feet suddenly worked differently. We’ll need to do some studs practice in the future so that we can use them the next time we need to. Here’s the coursewalk if you’re interested.

Jump 7 and 8 were on a hill between the two fields so after 8 they’d be on better footing. We were a bit concerned about the footing going into and out of the water between 3 and 4. The water wasn’t flagged, but there was no way to go around without risking holes. 4 was definitely the bogey fence for BN. The paint job makes it a scary looking jump and the footing would lead horses to be a bit pokey come up to it. There were more refusals and falls at that jump than any other for the division. I also overheard a lot of announcer commentary about the Novice #4 which was the same sort of jump placed closer to the water.

Weather-wise, Saturday started off really well. It was actually bright and sunny although cold. I ended up sitting out in the sun with a blanket and a lap dog for a while to warm up. 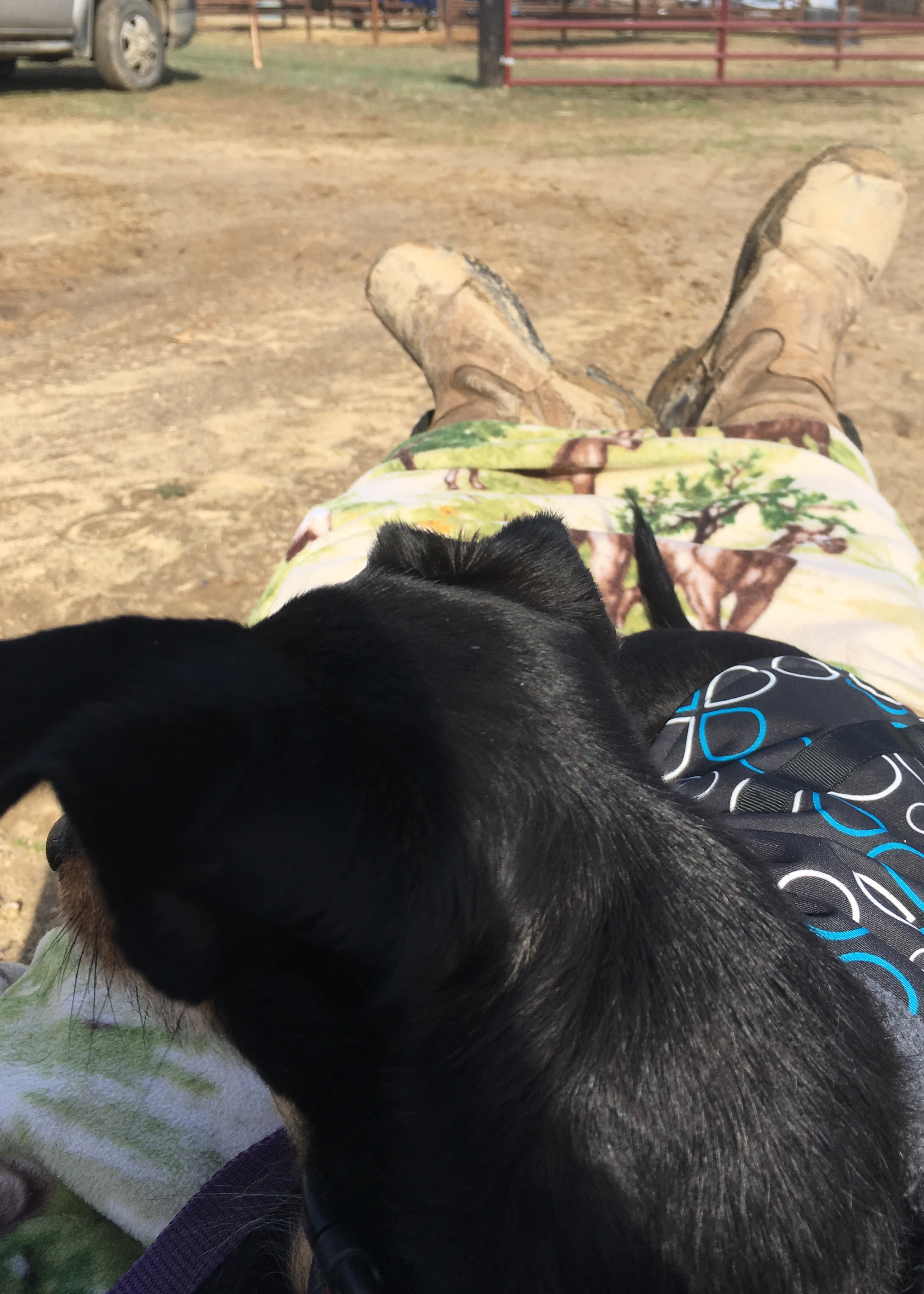 We were thinking this is awesome: the tracks are drying out, it’s bright and sunny, cross country won’t be too bad. Then, as we were walking back from watching some Novice XC, it started drizzling. But I refused to acknowledge that. Like, if I pretend it’s not happening, maybe it won’t happen.

Back at the barn, my husband got changed and started tacking Eugene up. And then it started pouring. The sound on the metal roof was deafening. I wandered down to the end of the aisle and realized it was so loud because it wasn’t rain, it was hail. I collected some on my sweater as proof. 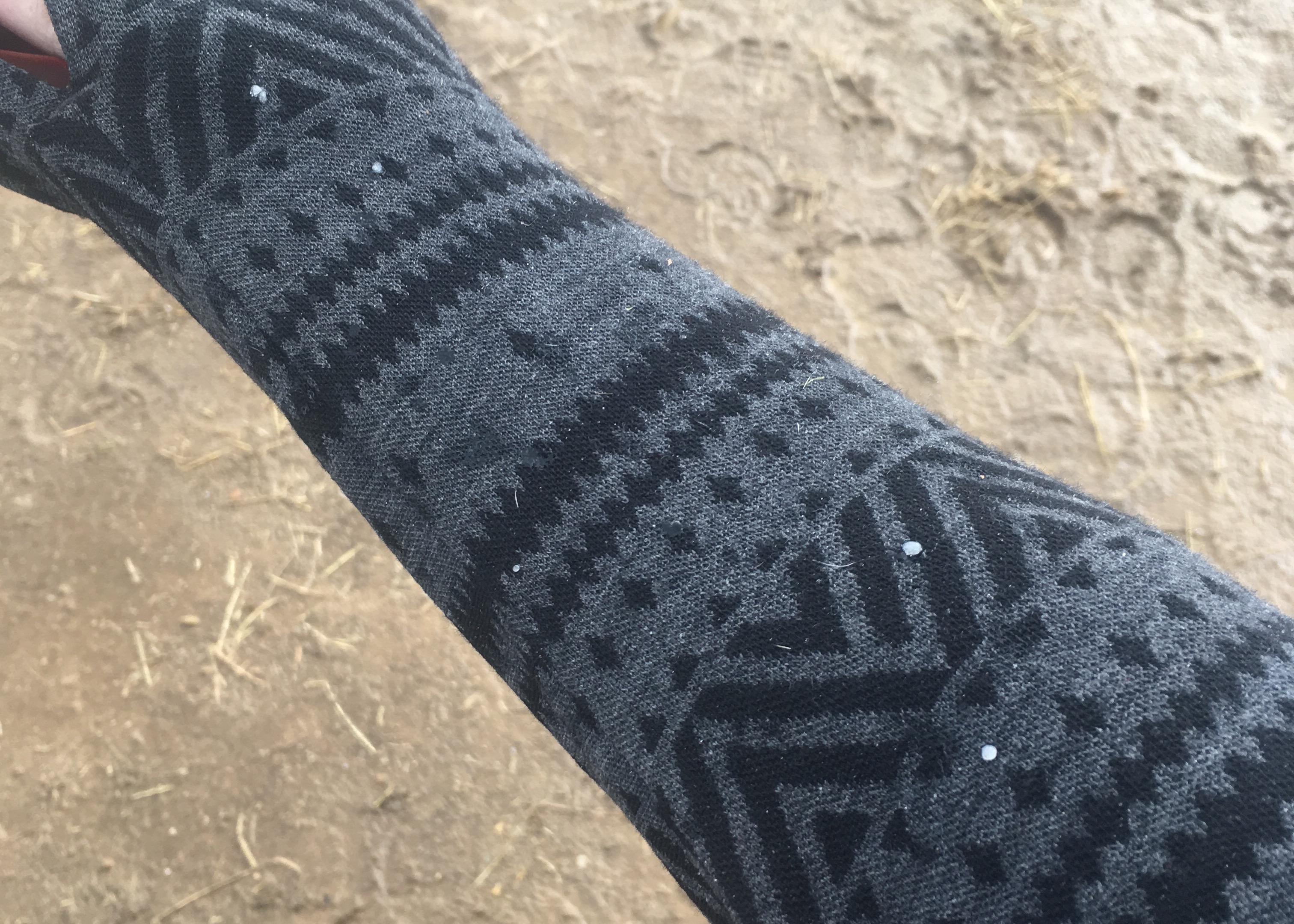 By the time my husband had to leave the barn for the XC warmup the hail had calmed down to a more sprinkling sort of hail instead of a torrential downpour. I cannot imagine how hard to was to do XC during that hailstorm. My husband overheard someone complaining that their face hurt from riding through the ice.

Eugene was lit. He doesn’t need a lot of warm up for XC so my husband did a lot of walking, a bit of trotting and cantering to get his muscles warmed up and then popped over like 4 jumps max. Then it was time for the start box. I love how Eugene just stands there totally chill. 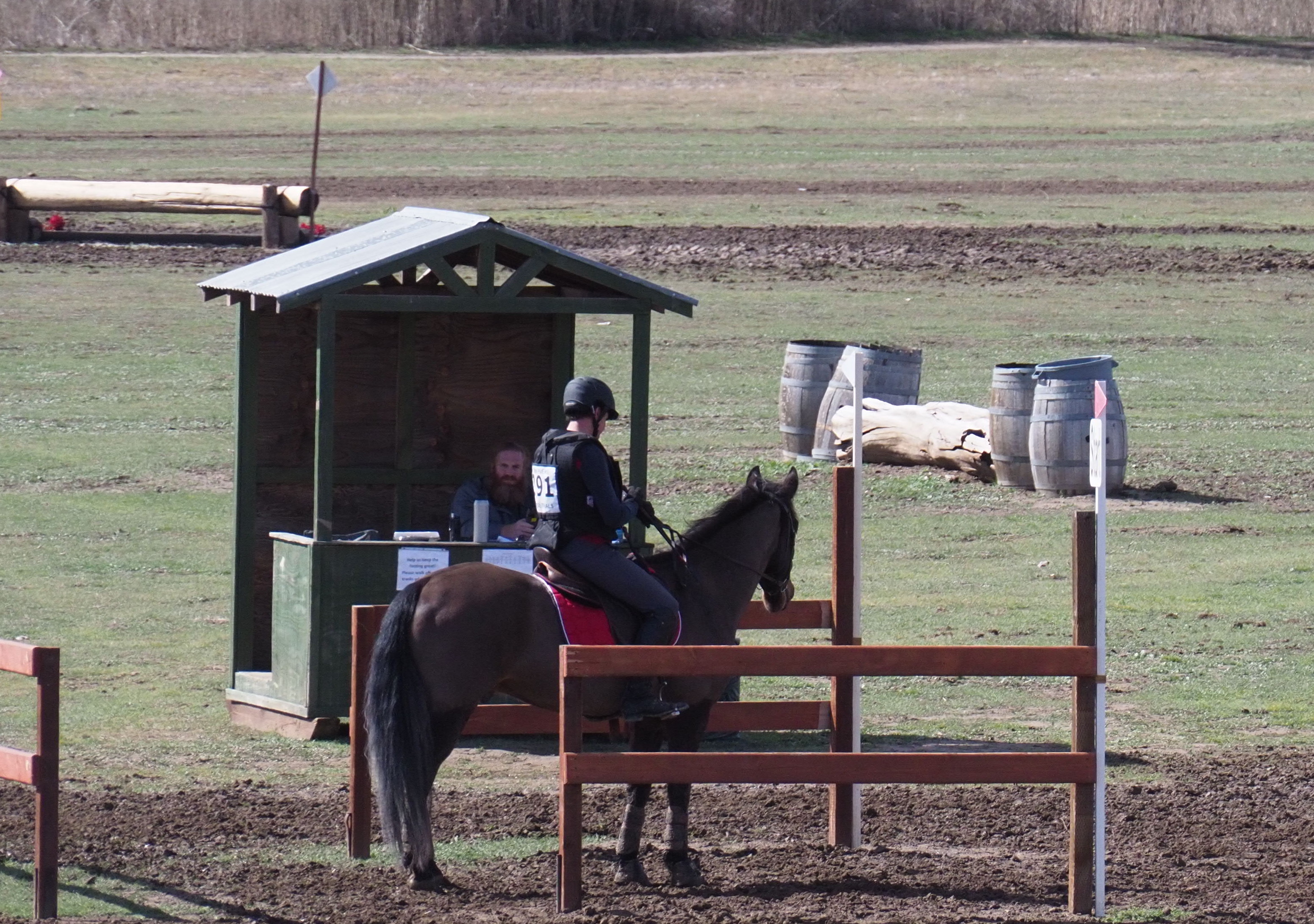 Don’t let that calmness make you think he’s not excited though. He’s just well behaved. Once he gets to go, he is going. He really surprised my husband by launching himself over that first jump. 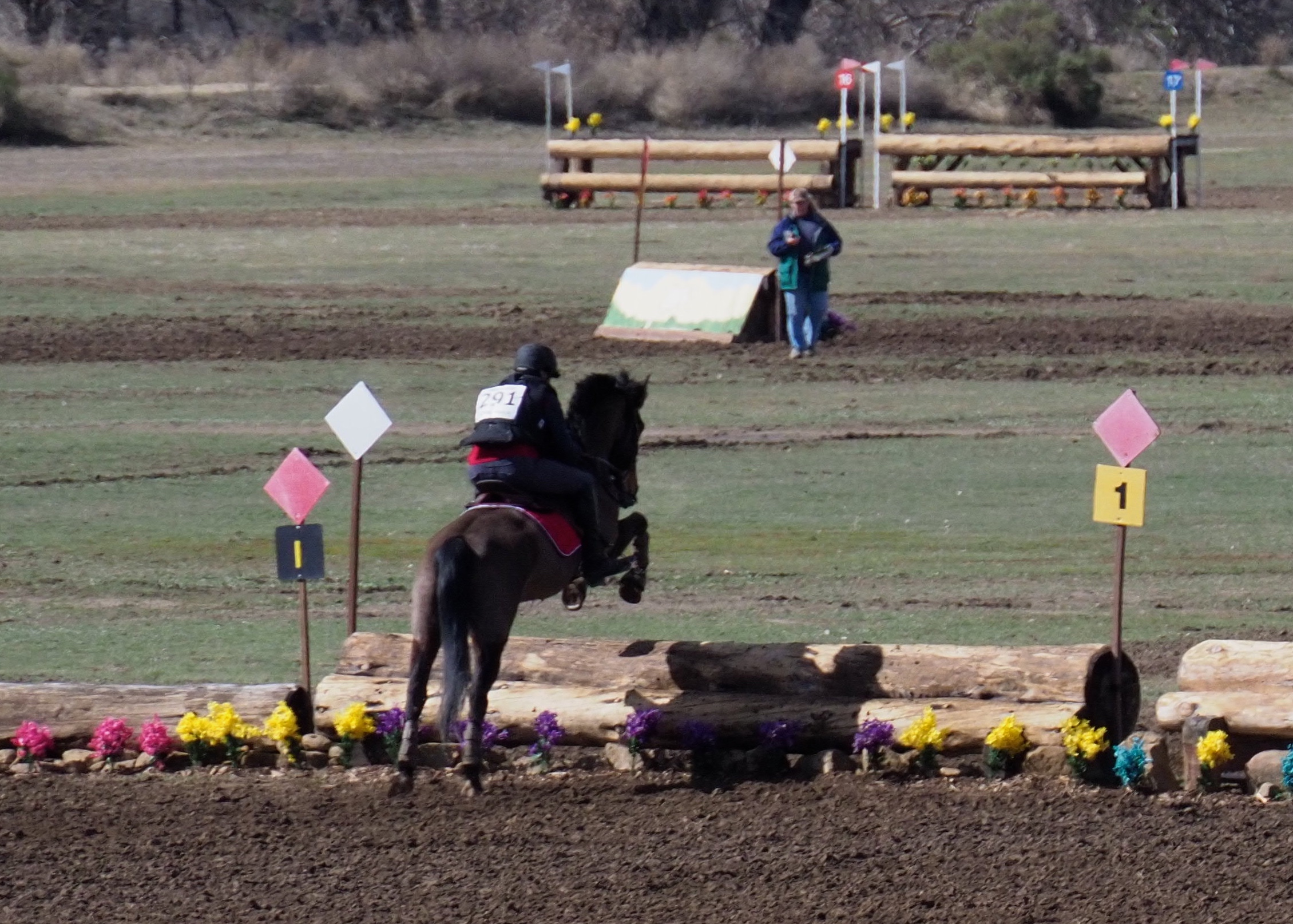 little bit of an overjump

The optimum speed was really low at 325mpm with the speed fault time at 4:46 and optimum all the way up at 6:10. With all that time to spare, we had discussed them going slower on the lower field where the footing was worse. I snapped a picture of them over 1 and then was hustling over to get into position for some pictures in the upper field when I heard the announcer saying he was approaching the Trakhener and then popping over that without issue and I was like omg, how fast are they going?! I had to run, tripping through the mud, bogged down with the camera, to get lined up for additional pictures. 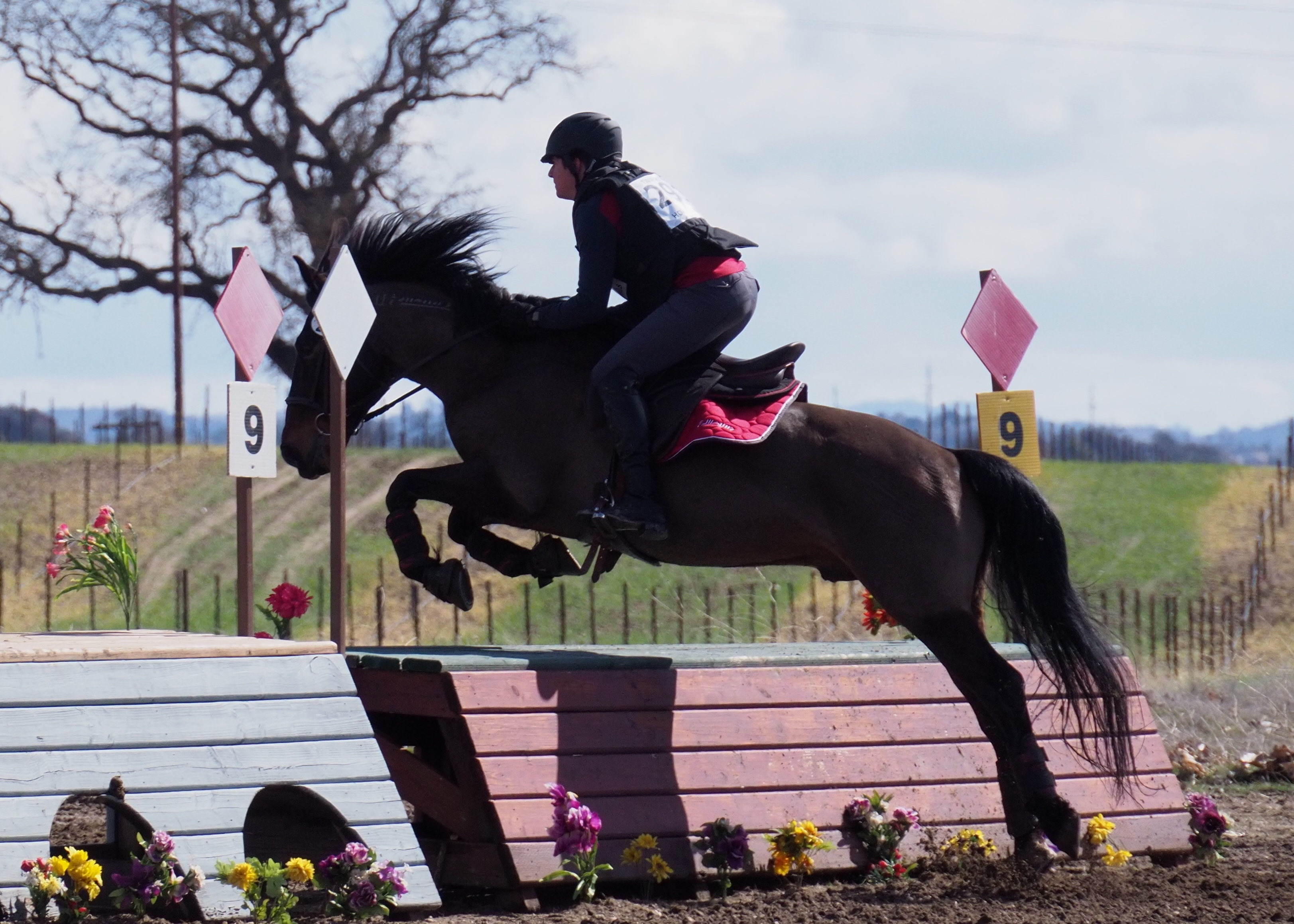 I thought this table was massive. My husband was not concerned. Clearly he was right.

I was really far away from jumps 10-13, but I actually really like the way the picture turned out for #10: 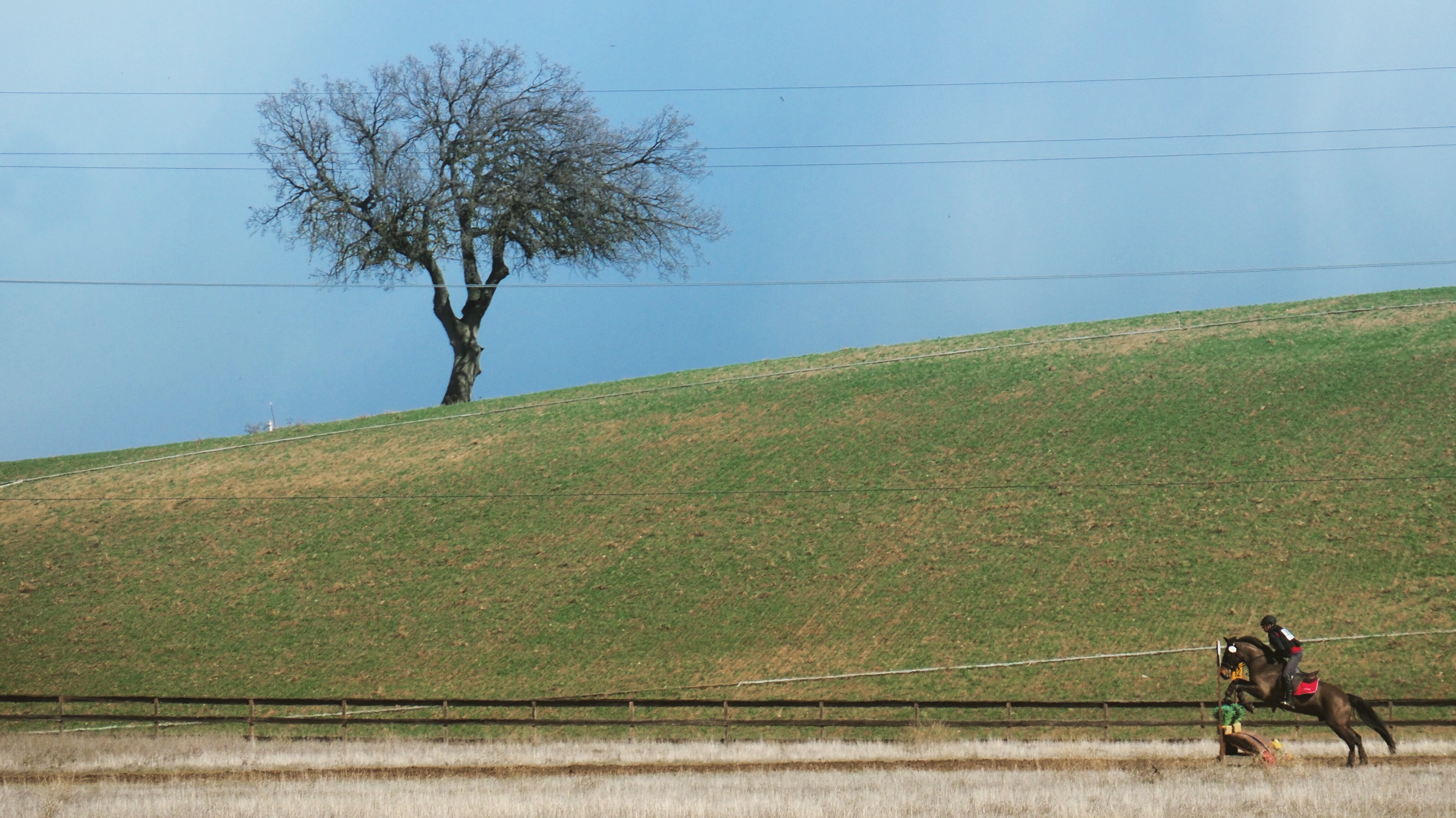 Little Mustang in a big world 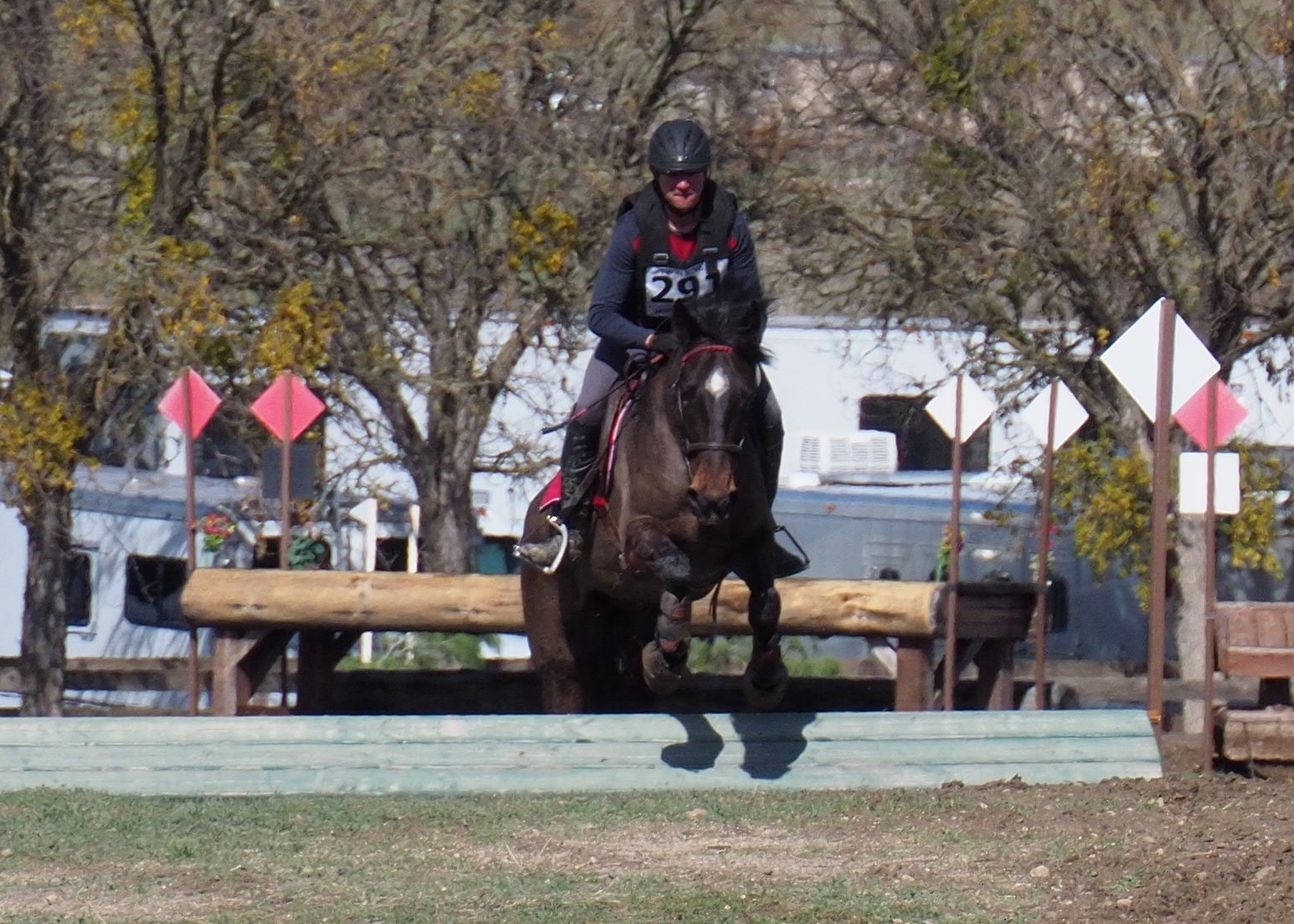 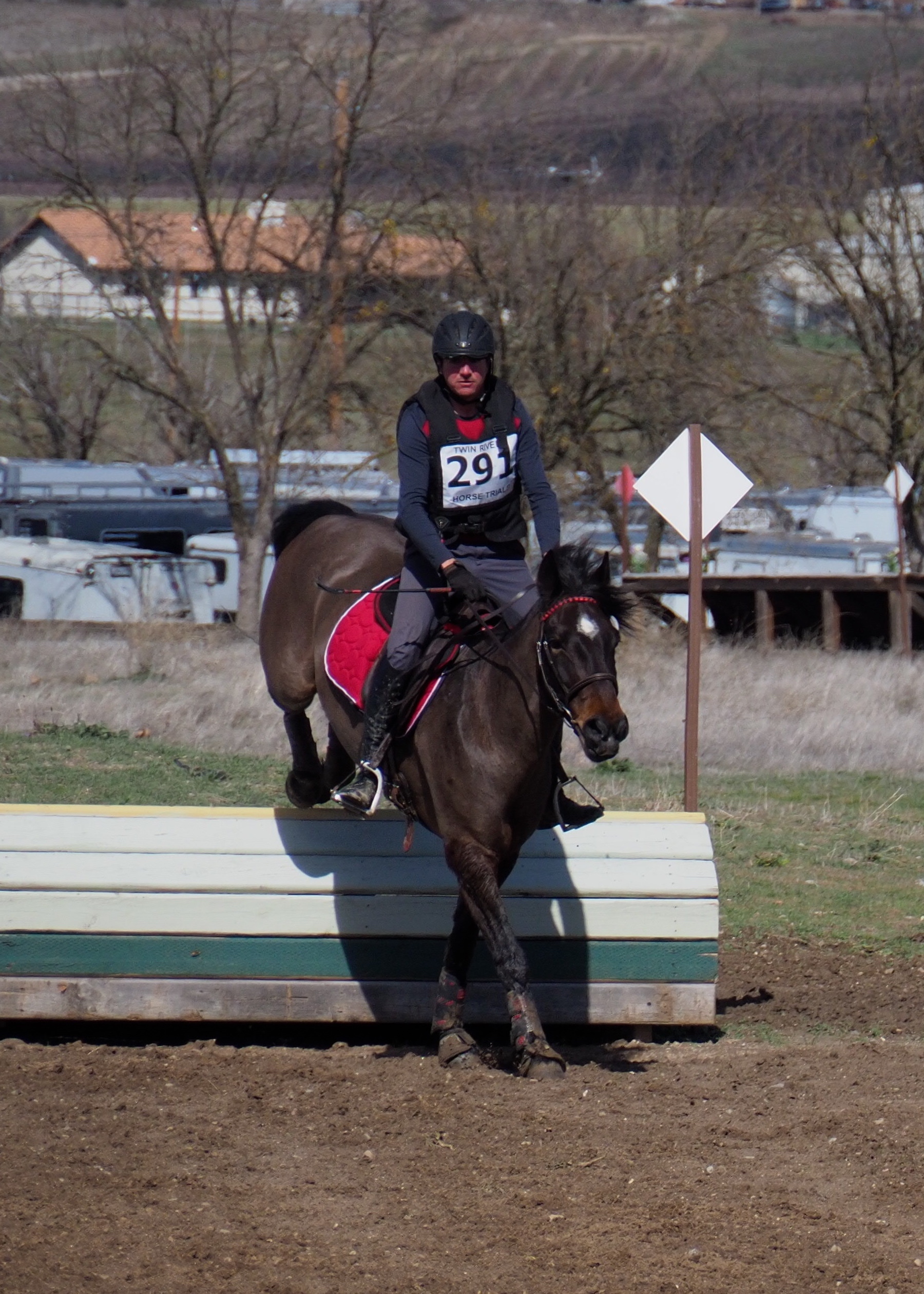 I was pretty precariously balanced and debated jumping down to get to a better place for pictures of #17 and #18, but thought the sight of me trying to scramble down would spook Eugene. When I told my husband that story, he was like, I didn’t even see you. But Eugene saw me: 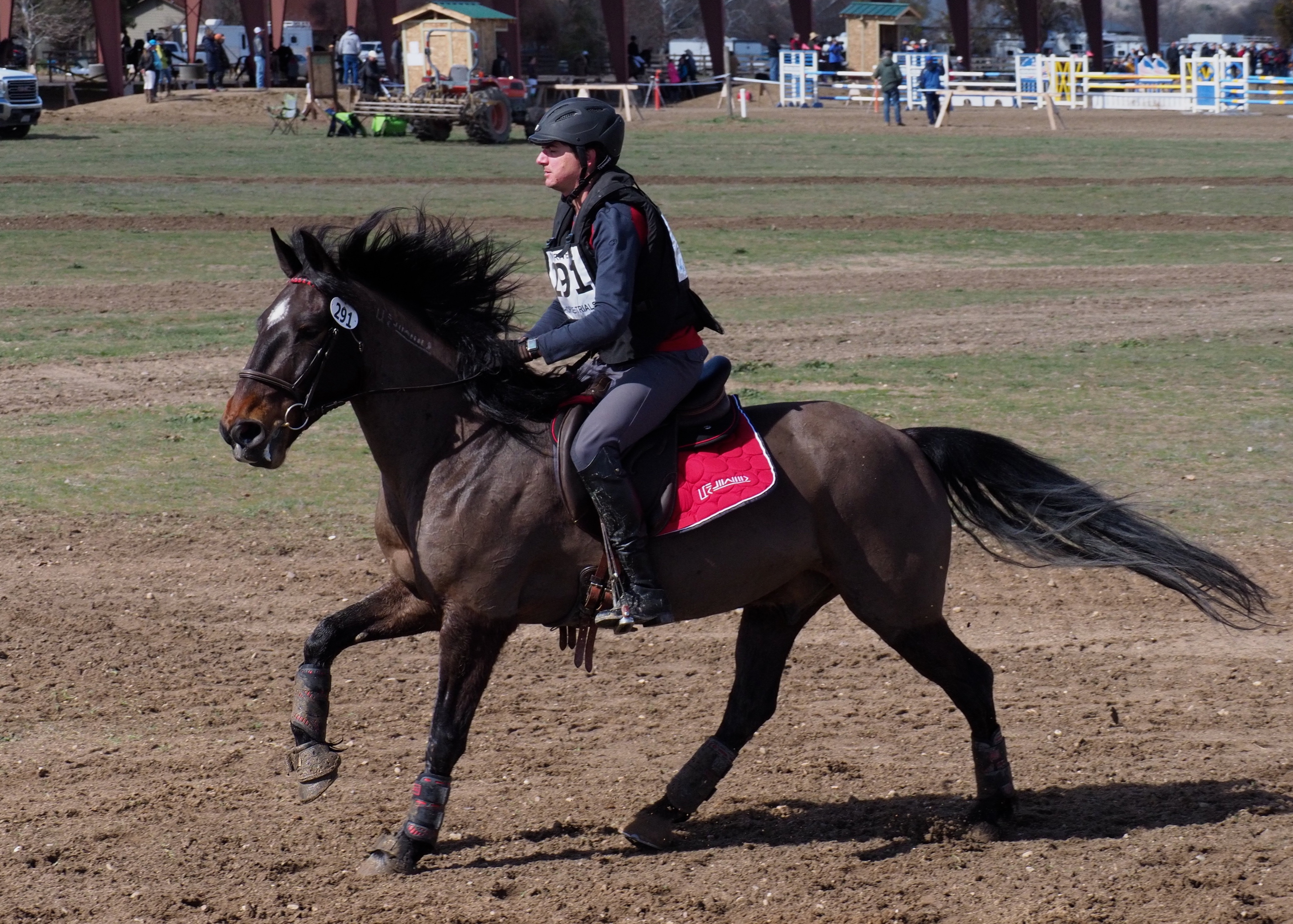 getting some serious side eye there 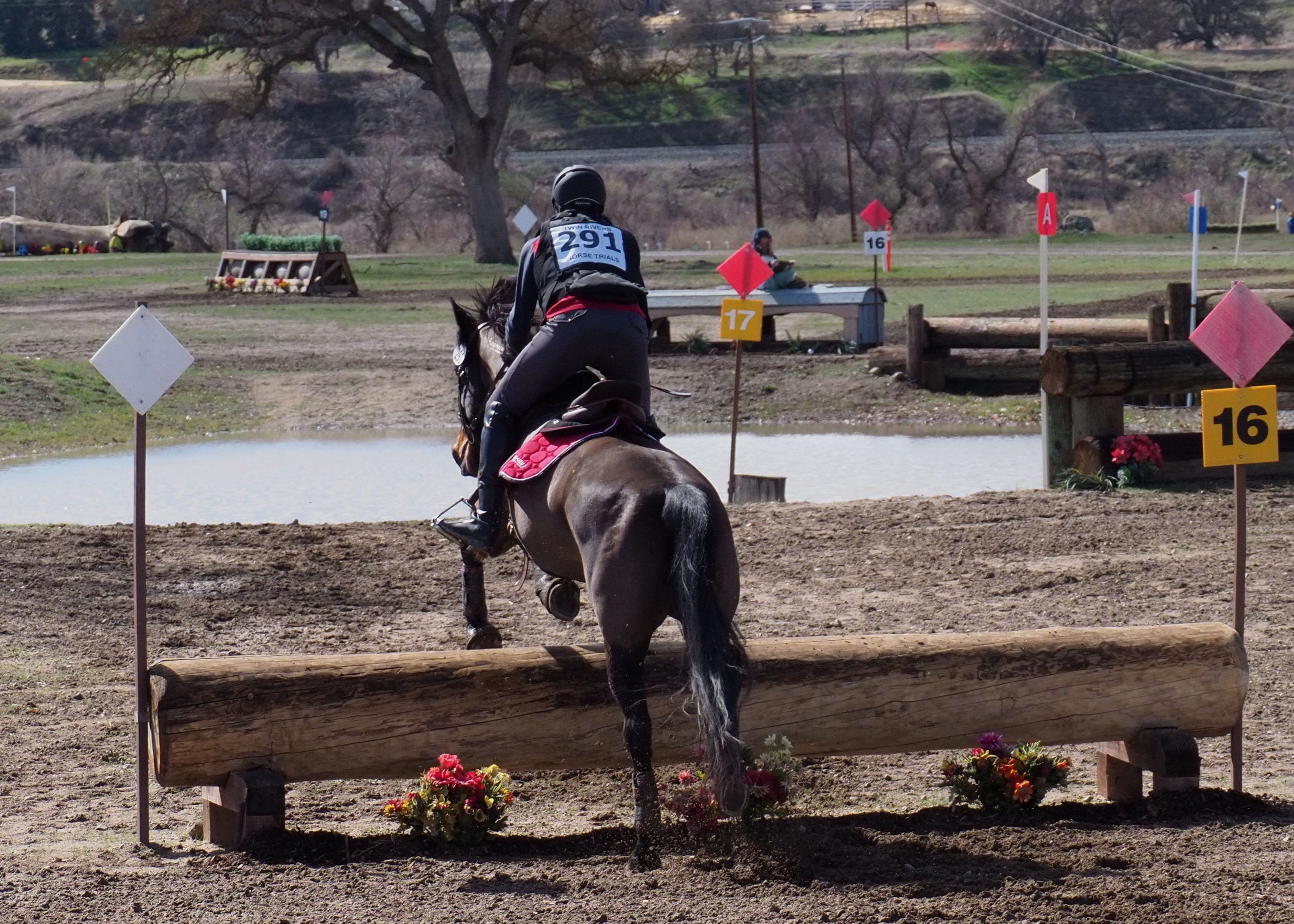 My husband had to slow him down in the upper field and they still ended at 5:12, which was almost a full minute under optimum. They were double clear. This cross country was pretty brutal: Two people withdrew before it even started (I guess they didn’t want to get hailed on?), there were two rider falls, and several refusals. This moved my husband from 12th to 8th. 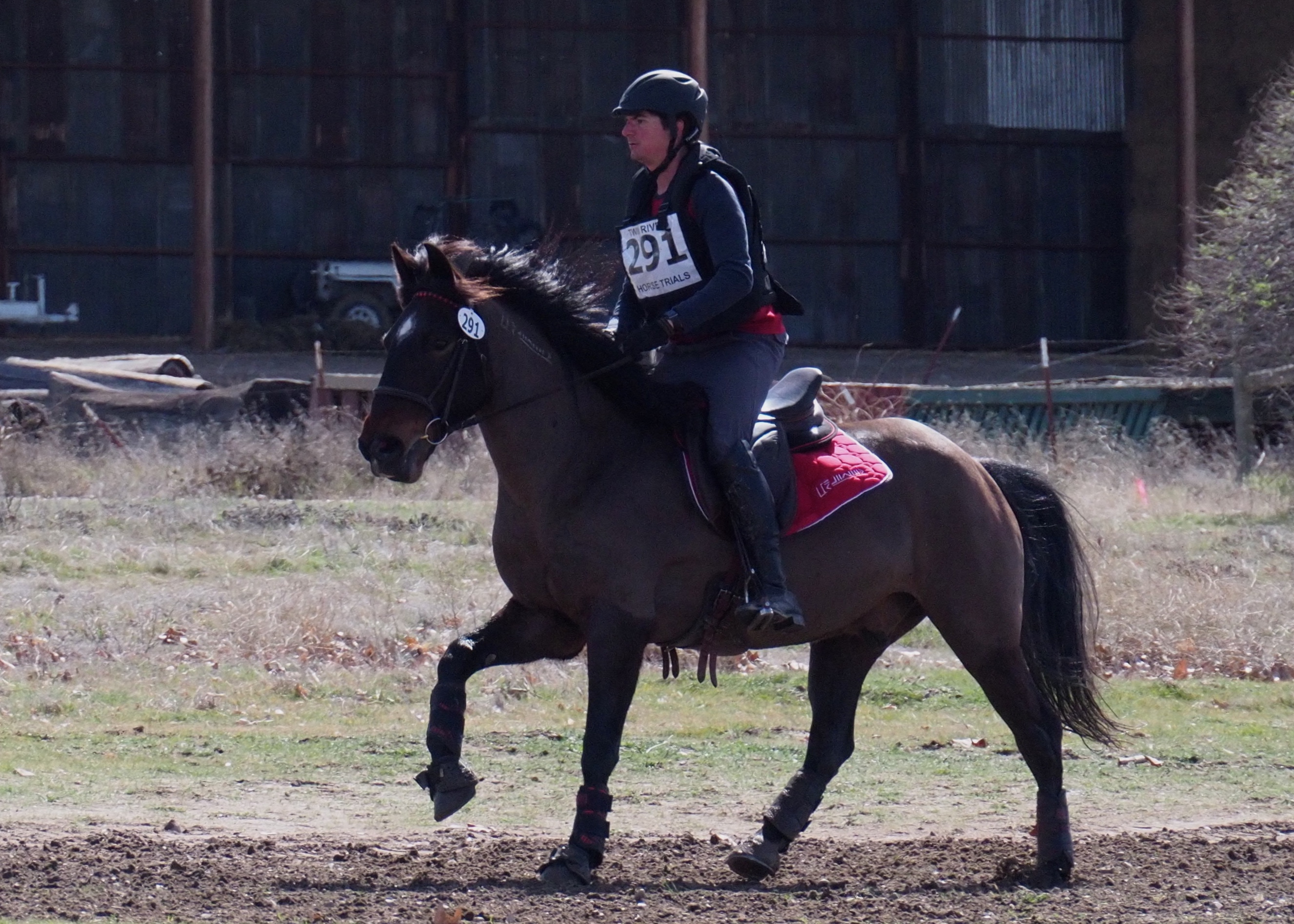 While we were in town the day before, we picked up a copy of Jim Wofford’s Training the Three-Day Event Horse and Rider from the bargain bin at the tack store next to our hotel. It’s older and based on the long-format and I haven’t finished it yet, but there’s a section at the beginning about choosing the right eventing horse that struck a cord: “The requirements you have to keep in mind are as follows: no one ever got hurt in the dressage arena – your ego may be bruised by finishing last, but you are still safe and sound…” Of course this was back in the days of the long format when dressage wasn’t quite so influential in eventing, but there’s still truth there. Eugene might not be fancy, but he is rock solid on cross country. That little horse will jump whatever my husband points him at and stay on his feet while doing it no matter what the conditions. And he loves every second of it too.