Sunday dawned with actually nice weather: the rain was gone, the sun was out, it was warm enough to take off my heated vest. We went over at 11 to walk the course and it looked pretty easy: not very fast and without any tight rollbacks. The only tricky parts for Eugene were the 2 stride combination at 4 and the 6-7 line which was along judge’s fence where spectators were standing. We figured he’d peak at the people instead of minding the jumps as he’s done that many times before. 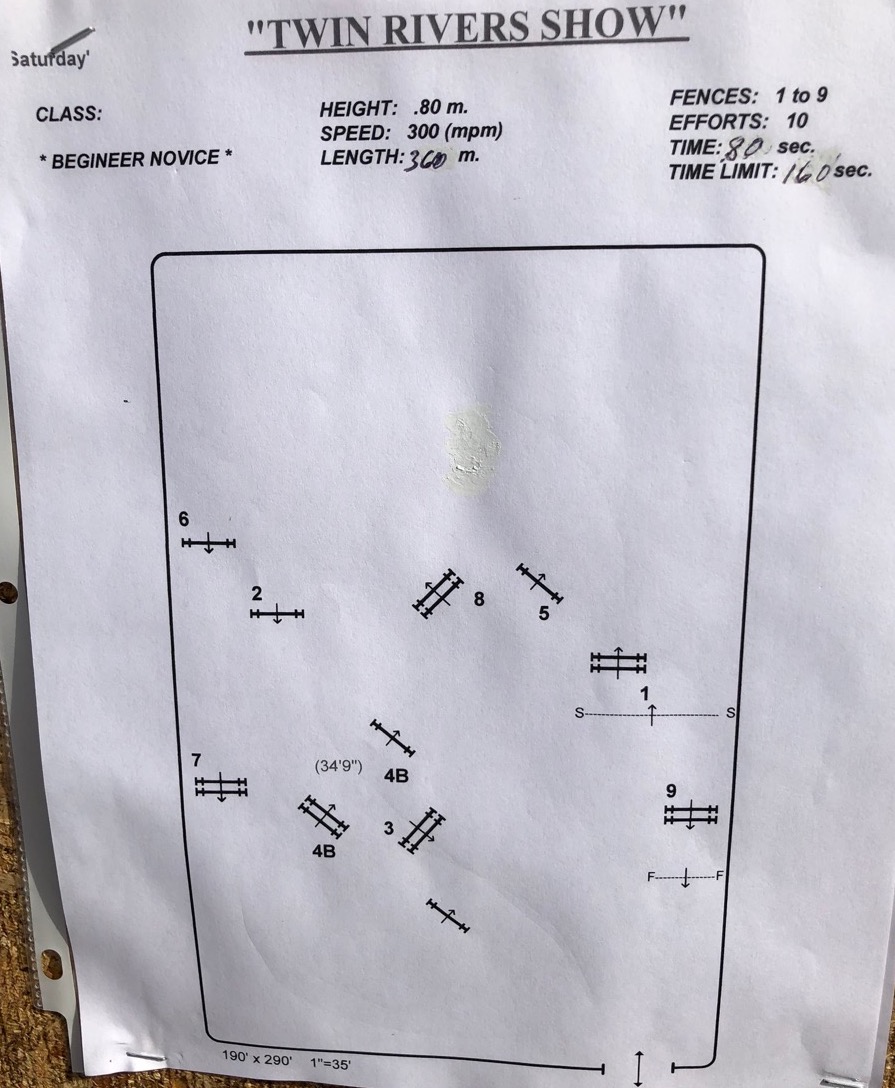 After walking the course, we returned to the barn to braid Eugene and get everything packed up so we could leave as soon as possible after stadium. We talked a bunch about strategy for Stadium. Eugene jumps really well on XC, but not so much in the arena and he really struggles with combinations.

I was a little concerned that Eugene might be tired after slogging through the mud for 2km on Saturday and not have the energy to pick his feet up, but he quickly dashed that thought once he got to warm up. He was super excited. My husband ended up doing just a few jumps again as we wanted to keep the pep and he was jumping perfectly.

Once in the ring, he did a quick trot down the scary side while the previous rider finished her round. 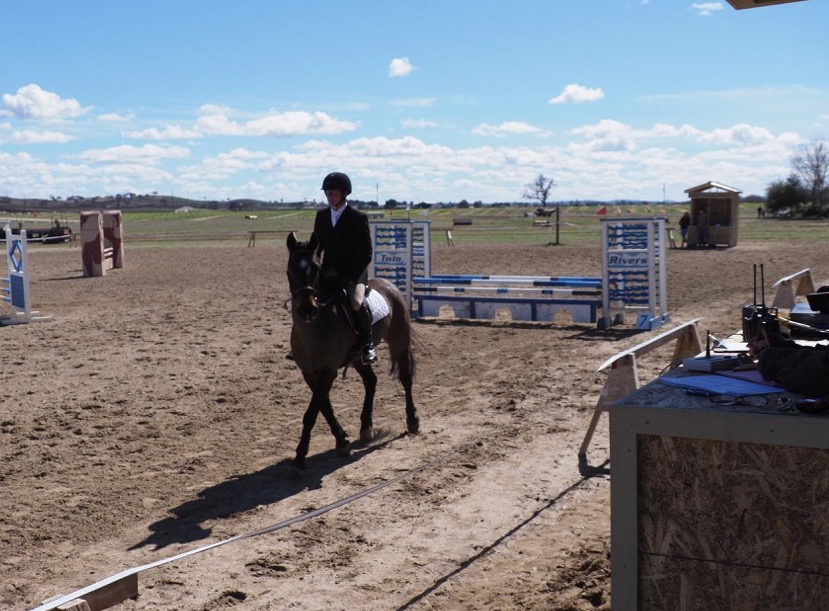 you can see him staring at the judge’s booth

Then it was time to go. Eugene started out really well by spooking at the starting timer, but my husband got him through and over the first jump without a problem. 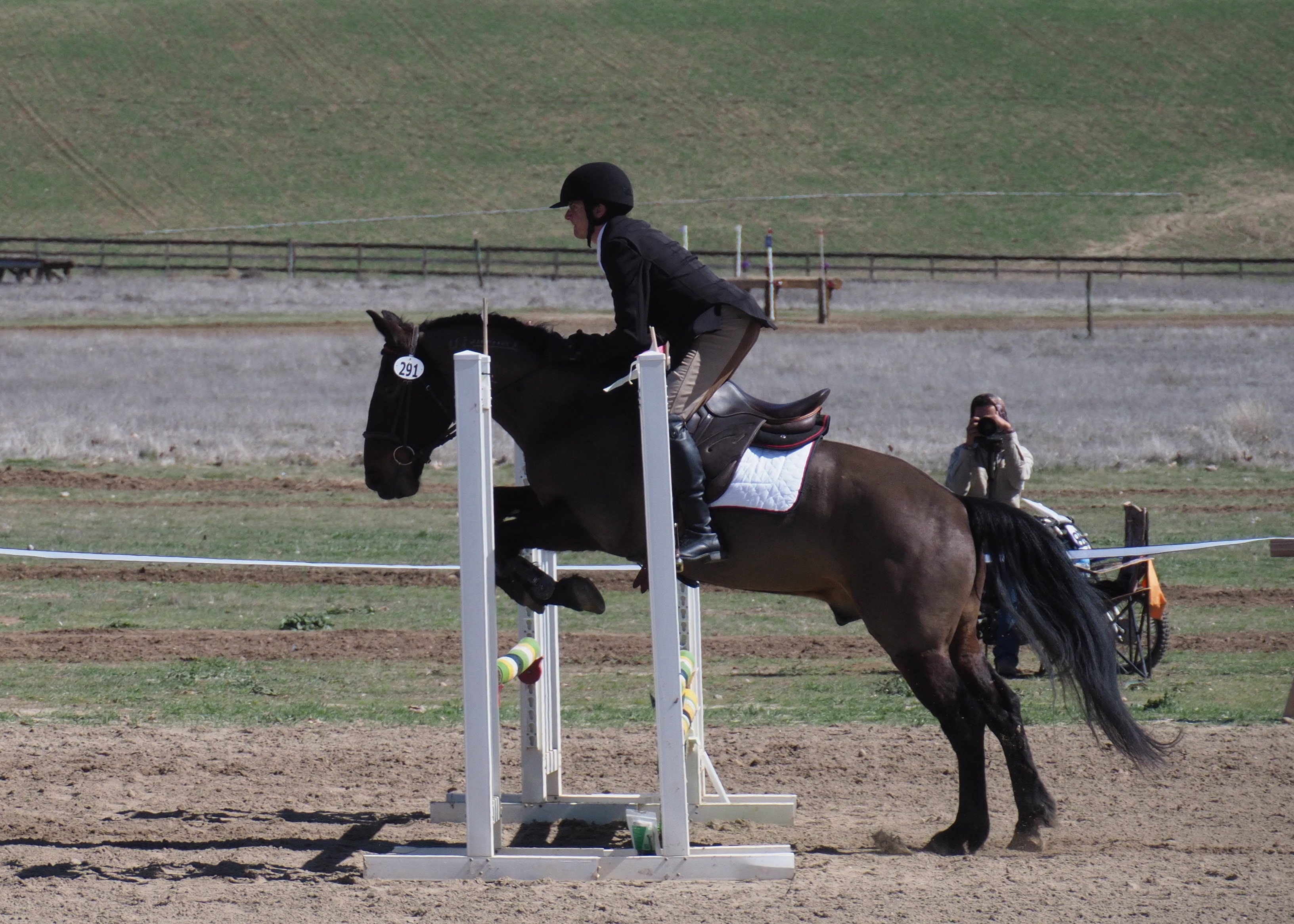 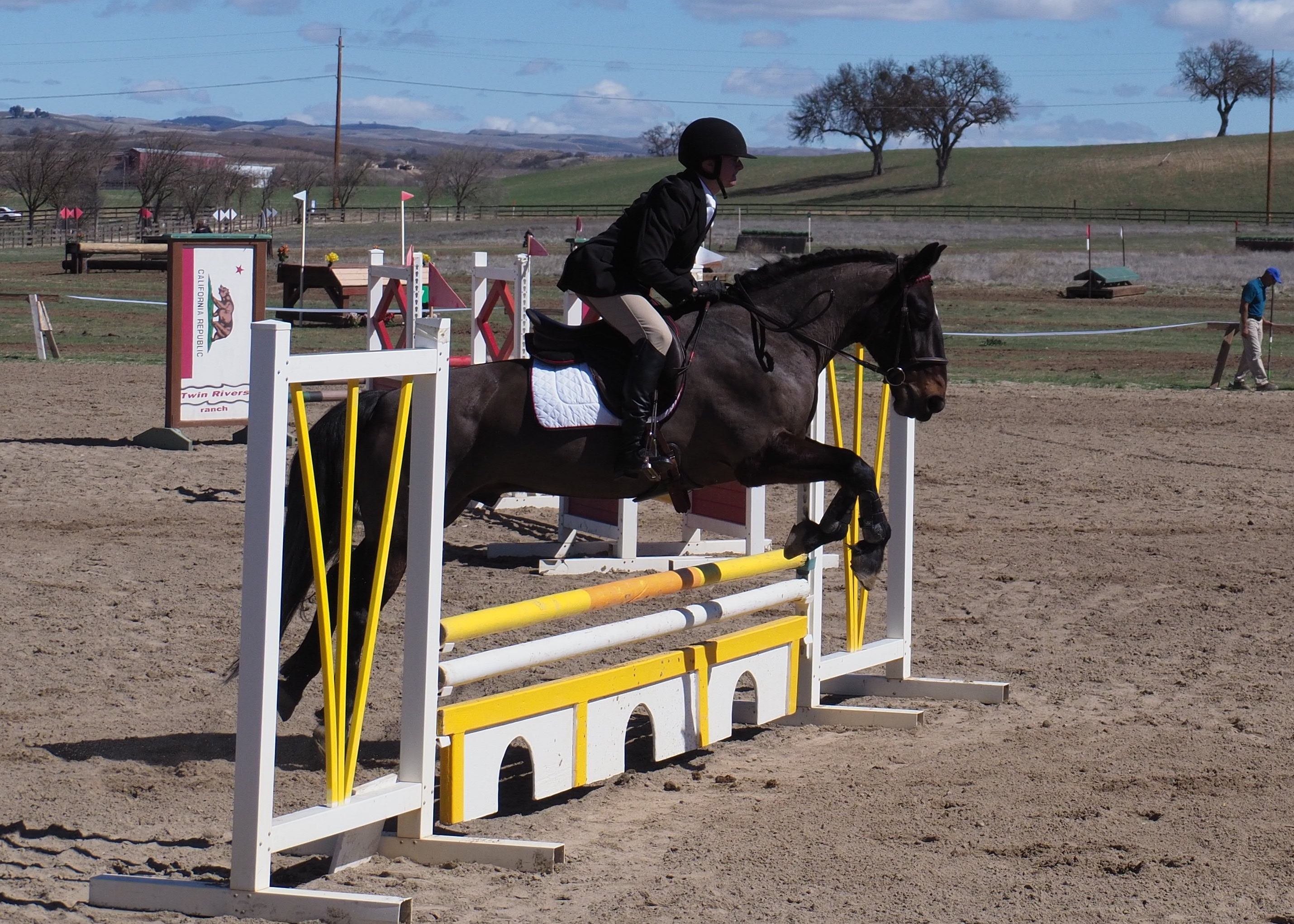 And then, despite the lengthy discussion we had during the course walk about handling the bending line by going straight and making a nice square turn before going straight again, they sliced straight from #2 to #3: 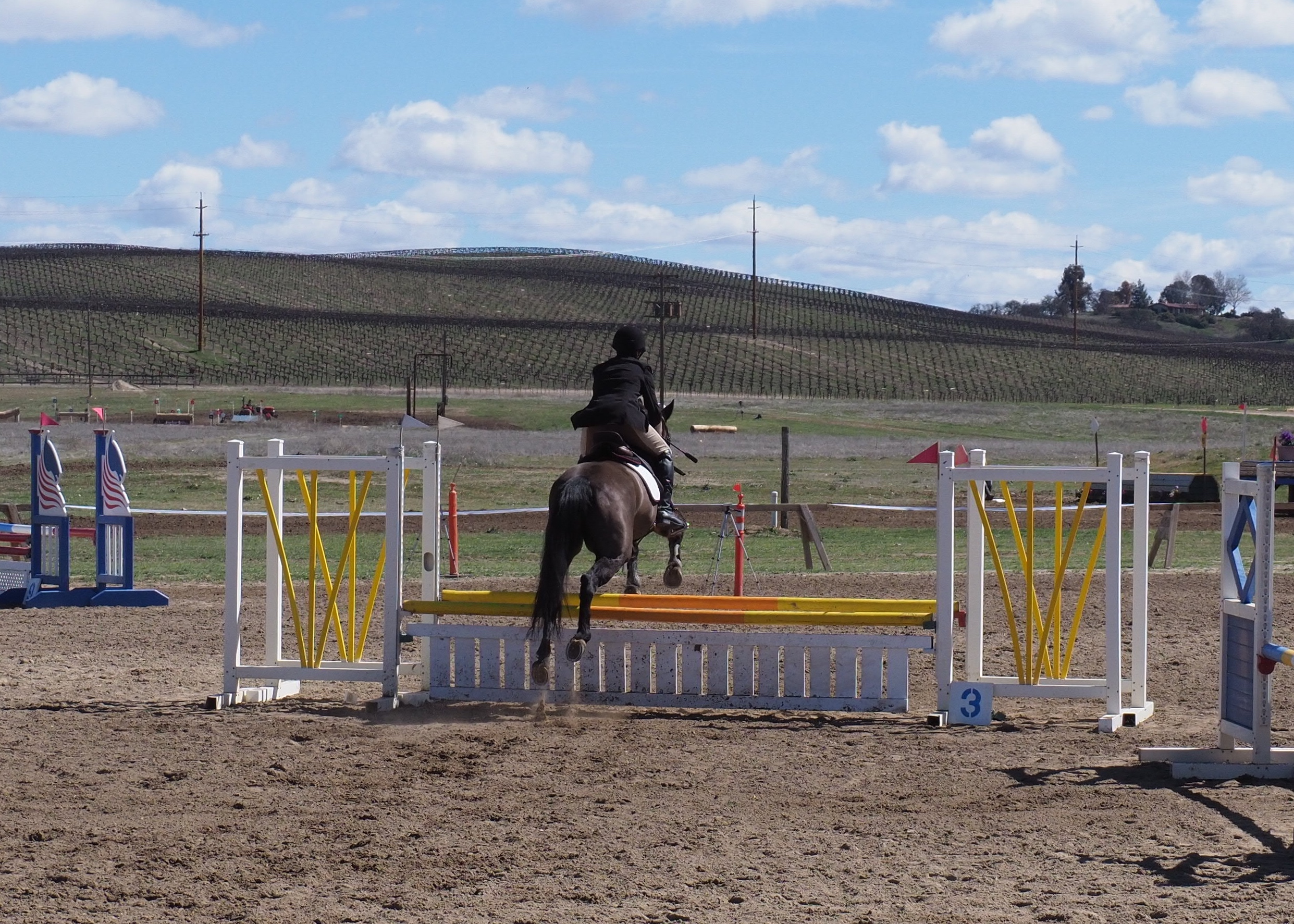 It stayed up though so I suppose that was fine. Part of Eugene’s problem with combination jumps is that he has a very tiny stride. Making the two strides between 4A and 4B was going to be very hard. I told my husband to push him hard to 4A, land with leg on and pushing forward and then really try to keep leg on and ask him not to chip in a half stride. Coming around the turn to #4 they were zooming and Eugene flew over 4A: 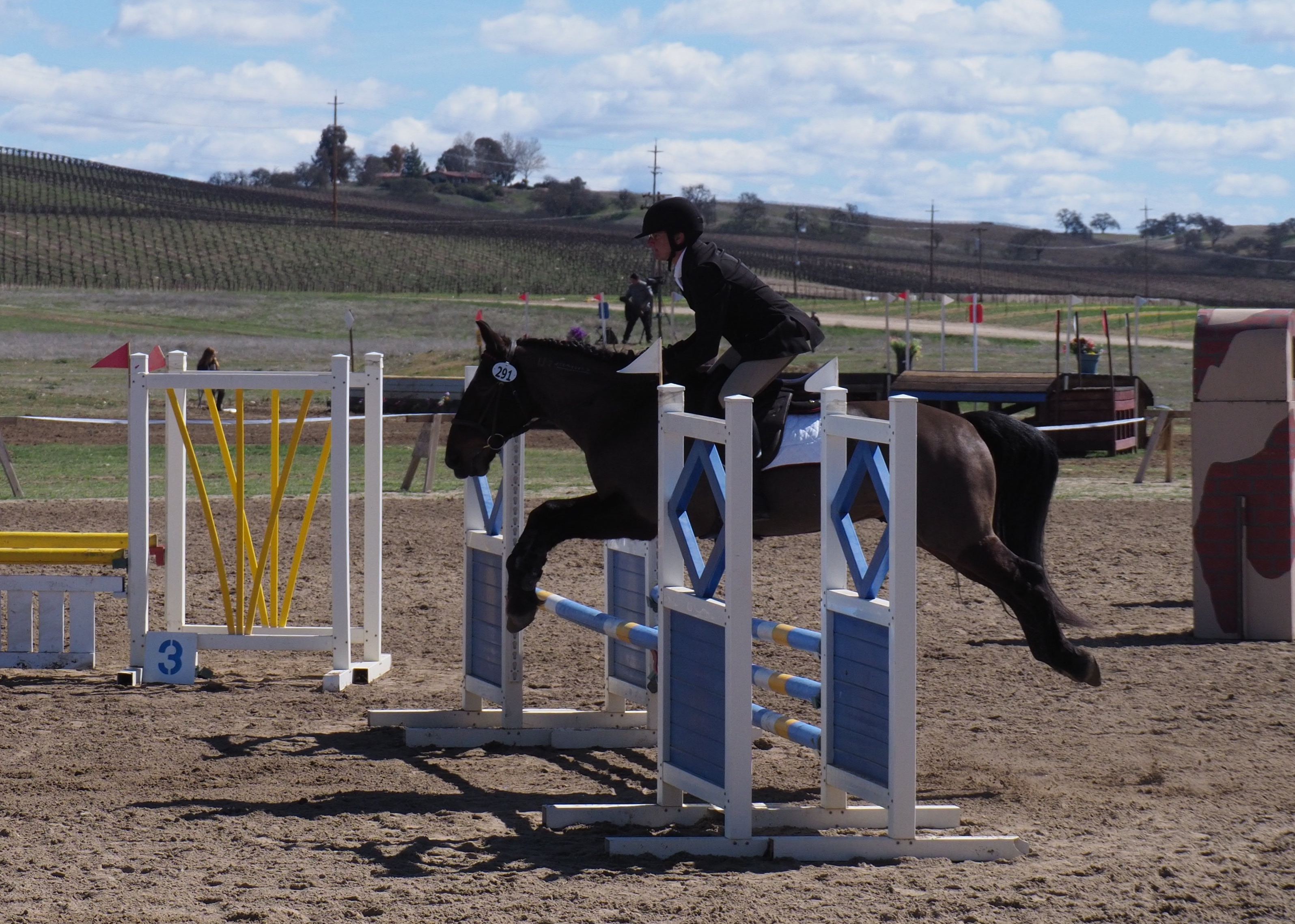 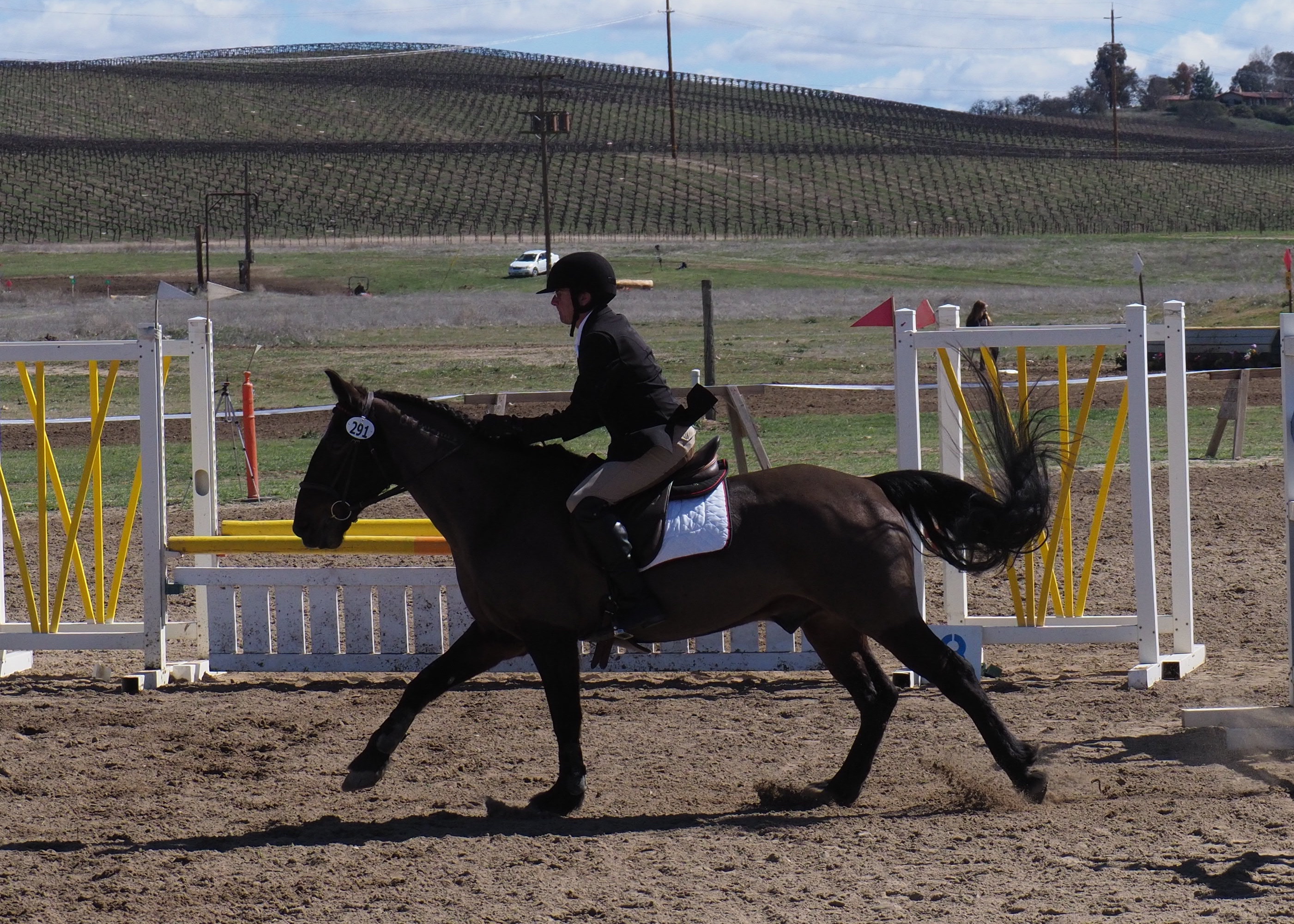 I was so nervous watching them that I totally failed to center the camera on them for 4B, but I think this is the furthest from the base this horse has ever jumped. 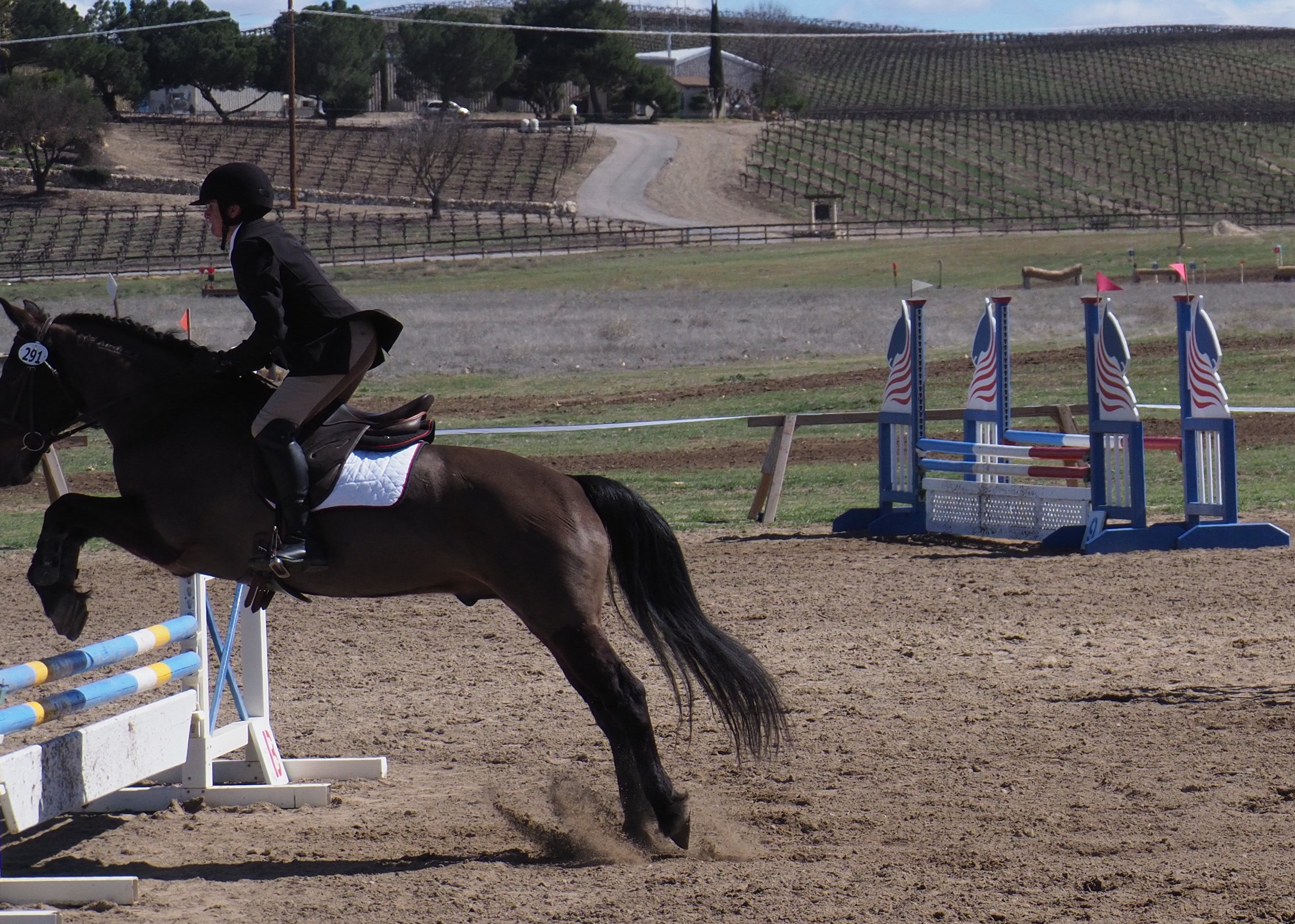 #5 went fine as well even with it being in a line with #4. Then they came around to #6 and Eugene was a little busy staring at the stuff outside the arena. My husband said he felt like he was rushing and was forward, but not balanced. My husband pulled the pictures off the camera and sent this one to me first with the question “can you name all the things wrong with this?” 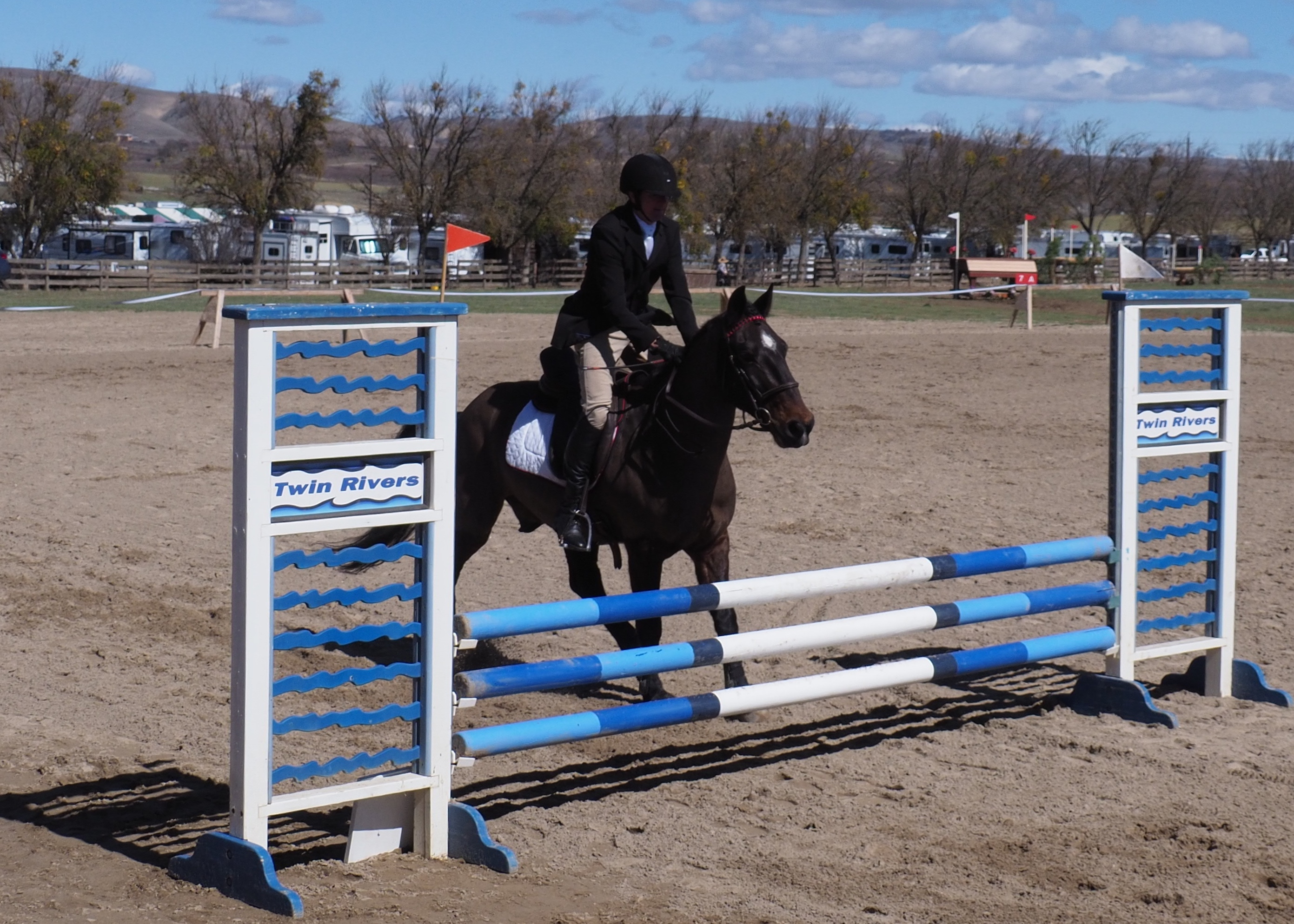 Poor pony tried to get over it, but he was way too close clear it: 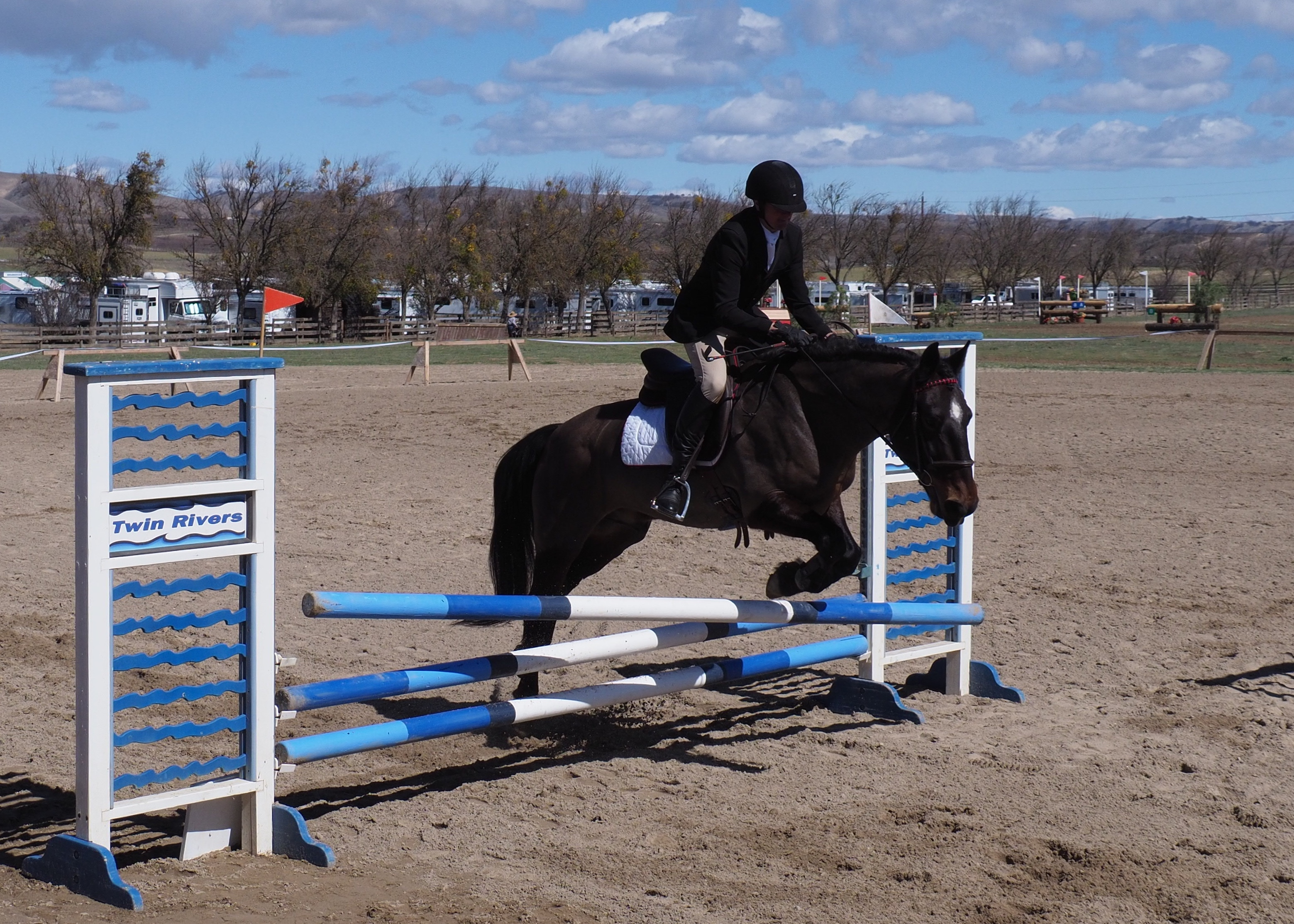 And then they rubbed the back pole on #7: 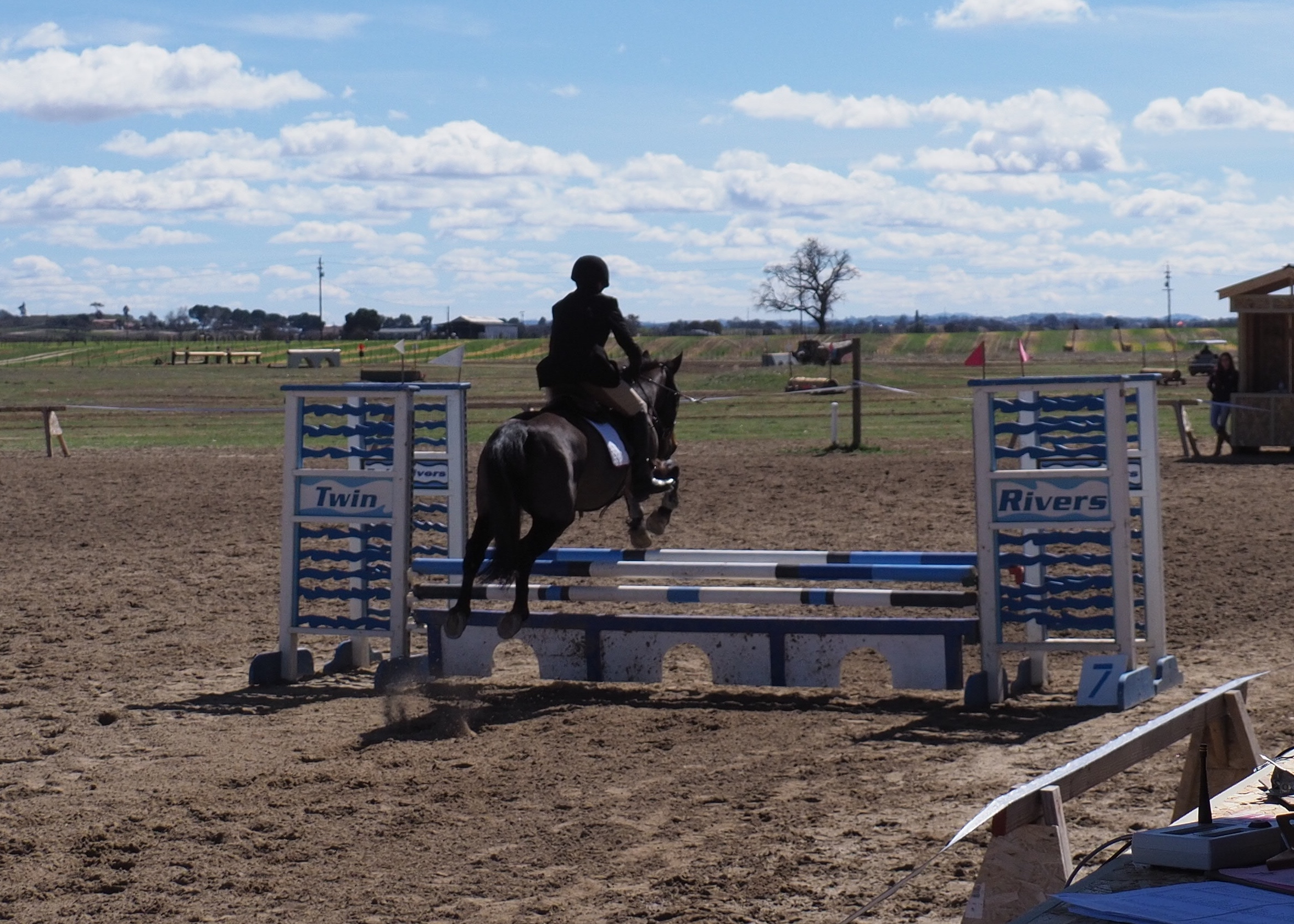 They were clear over #8: 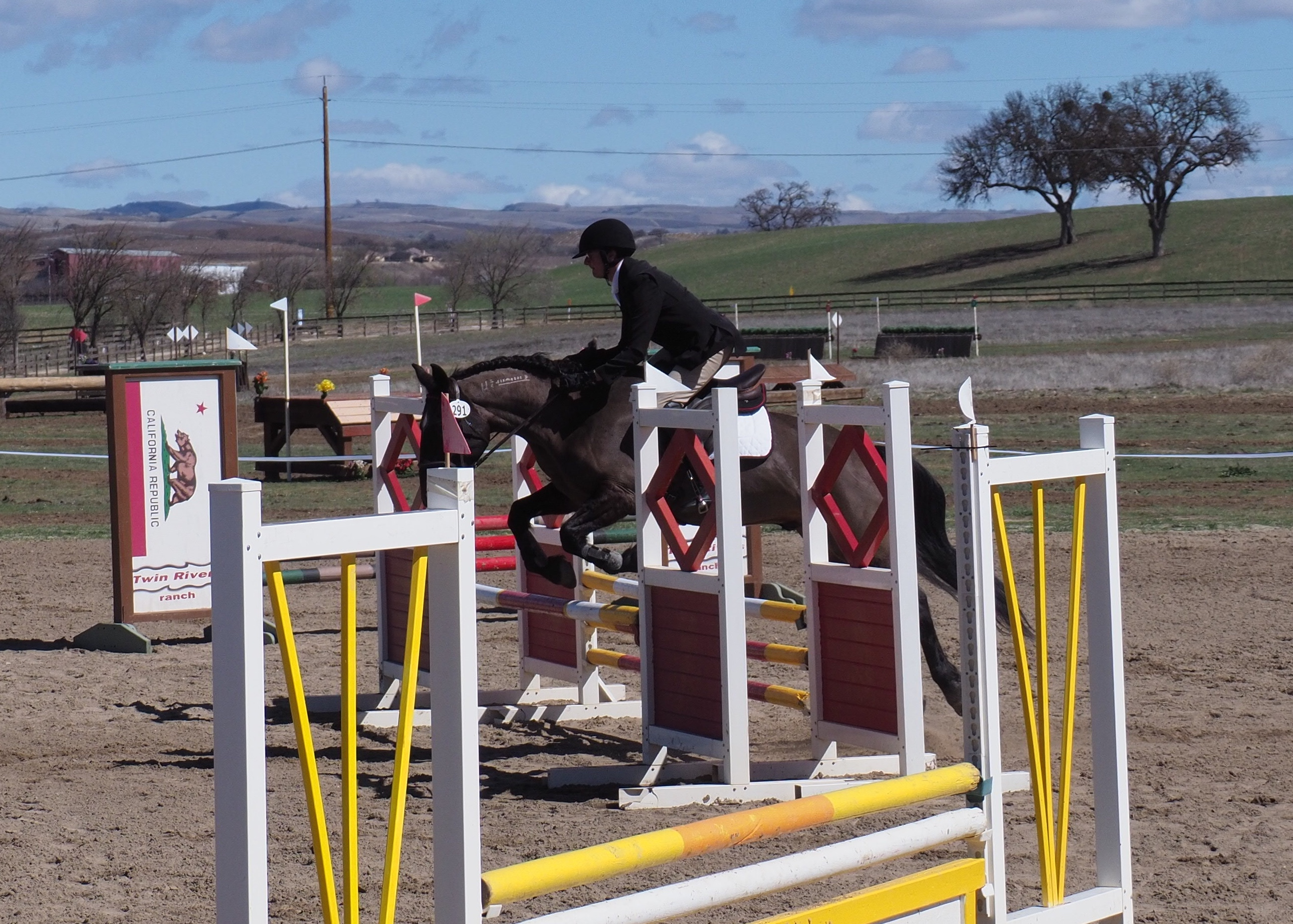 And then clear over #9, although in my attempt to avoid photographing the jump crew, I managed to cut off a bunch of Eugene’s legs over #9, which is a shame because look at those cute little knees: 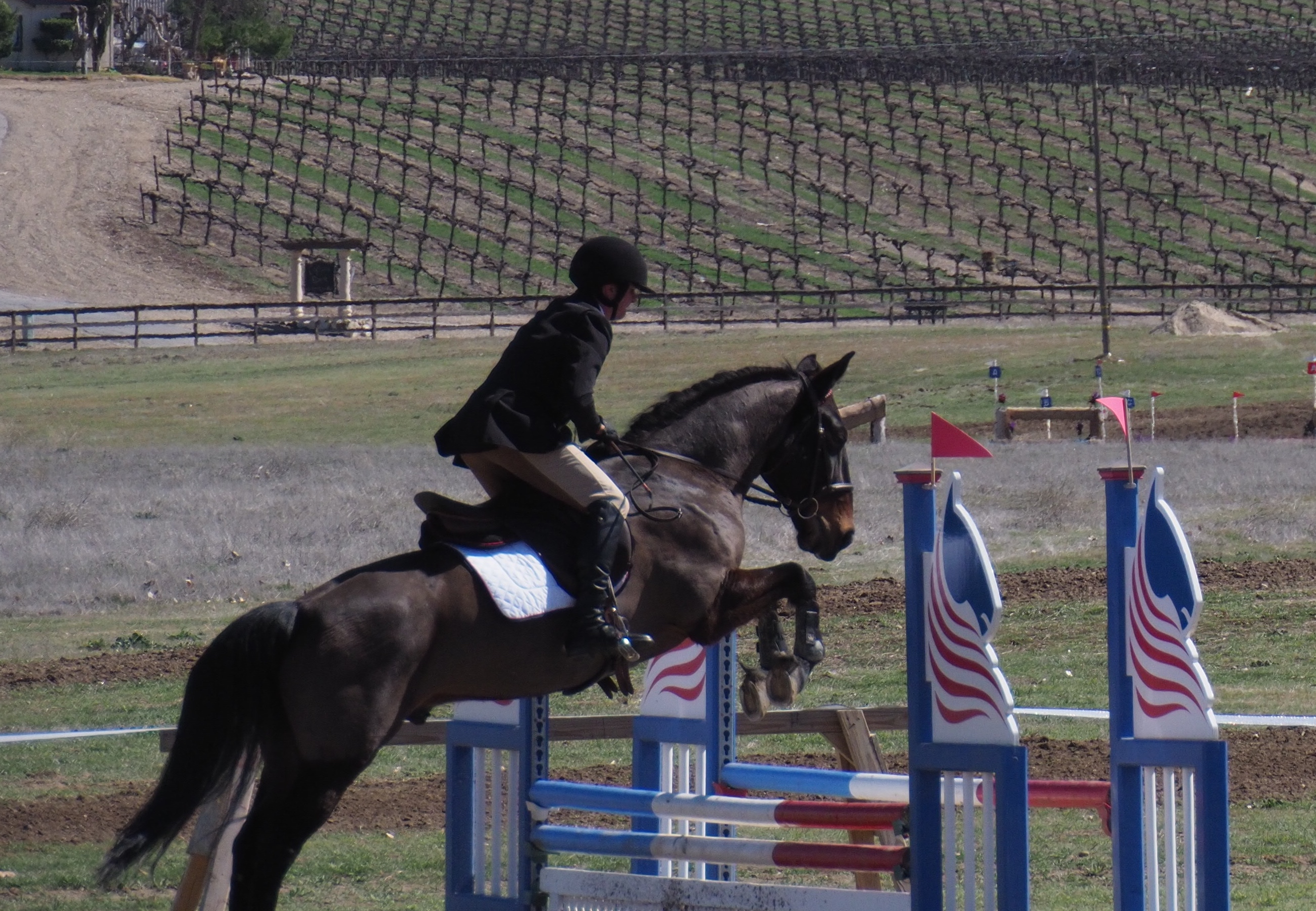 With 2 rails down and no time, they had a total score of 48. I was trying to keep track of the other riders. I thought that most of the people below him on the scoreboard had added enough points to stay below him, but I lost track with the people above him. I thought he was probably still in 8th but I wasn’t 100% sure. He went in for the lineup and ended up with 8th. Just one out of the ribbons! They did get to participate in the gallop though and Eugene thought that was fun. 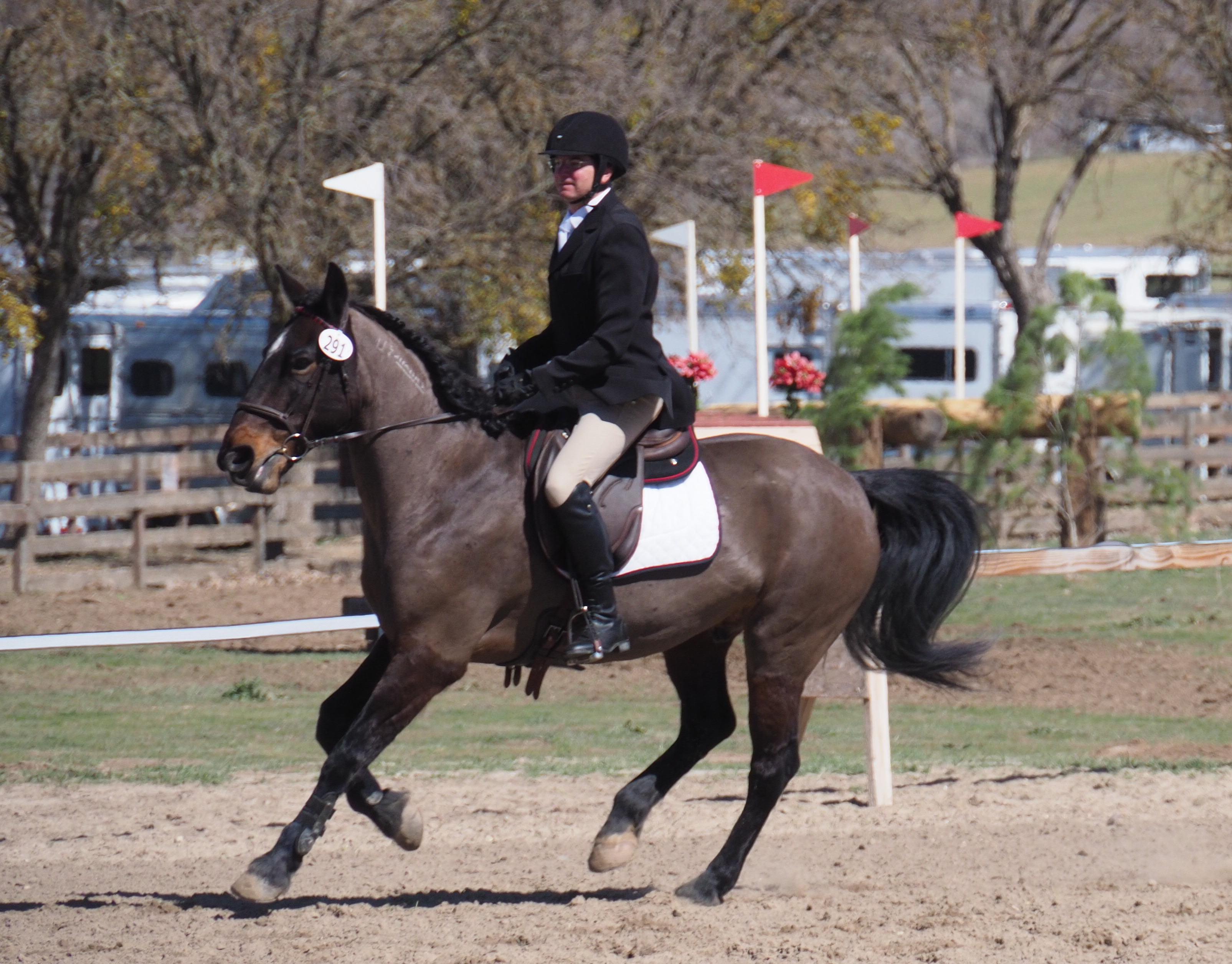 Finishing a rated event at 8th out of 18 was a pretty great way to end the weekend.  Despite the two rails, it was one of their best stadium rounds. They were forward and really getting up over the jumps with nice form. It was also their best dressage score yet. It’s a pretty excellent start to the year.