On Saturday my husband and I took Dijon and Nilla to Woodside’s Day of the Horse. Woodside is this amazing town that has barns and horse trails all throughout it so you can ride everywhere. If I ever become a multi-millionaire, I would live here. As it is, an empty lot in Woodside costs a million so we won’t be moving there any time soon. The town has a horse owner’s association that does upkeep on the trails and promotes horses in the area. They run the Day of the Horse once a year and we’ve been wanting to go for years. 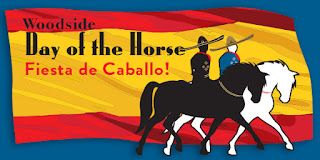 Part of the Day of the Horse is a progressive trail ride. You ride from point to point and get your map checked off at each stop. You can pick and choose which stops you go to and only need to do 6 to get a goodie bag at the end. There are also goodies and snacks at some of the stops. And there’s a costume contest for riders. This year’s theme was Fiesta de Caballo so we prepared costumes in advance (which is an entirely separate post to come). 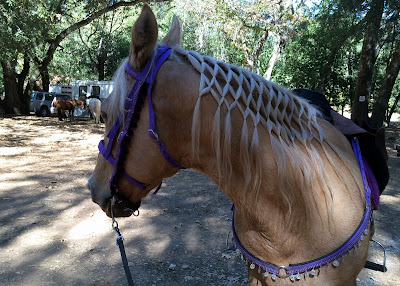 Nilla doesn’t have a mane so she took a lot less time to get ready. When we left for the ride, we ended up behind a group that also had a mule. A very cute one too though I didn’t get any pictures. That whole group was dressed up like Day of the Dead. One woman had even drawn bones on her horse. It was really cool. 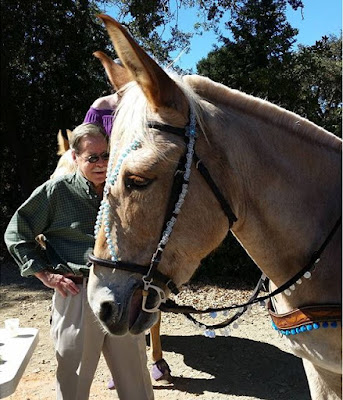 The first stop we went to was #10 and had the photographer. All the other groups went from that stop towards #9, but we went off towards #1 so we ended up going in the opposite direction of most people. Which was actually really nice as it gave us some breathing room. We did get to see a lot of riders coming towards us and admire their various costumes and outfits. 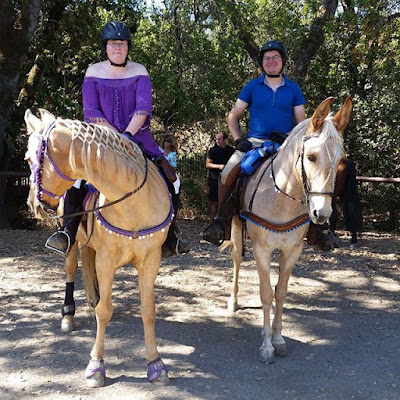 All of the stops don’t make a perfect circle and #3 and #4 were off a distance so we skipped them. We had to cross the main road to get to #5 and the mounted patrol was out stopping traffic. They actually had volunteers at every intersection stopping traffic for the ride which was great. Some of the stops were sponsored. Like #1 was a riding club and #8 was a therapeutic riding program. #5 was sponsored by a restaurant (Buck’s) so they were giving out BLTs in addition to candy and carrots (most stops had carrots and our horses started to mug the volunteers at every stop once they figured that out). 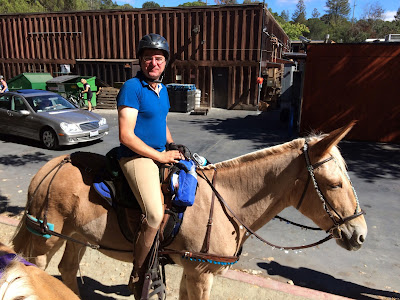 After Buck’s we headed up the road all the way to the Equine Therapy place which is home to my favorite used tack sale. As we were riding towards NCEFT, a woman going the opposite direction said, “is that Dijon?” I said “yes, do you know Dijon?” and she said “yes, I sold him to you!” At this point we had already passed and she had a line behind her so I could only yell back “Hi, so good to see you” before we were separated. So random. I haven’t seen her in 4+ years. 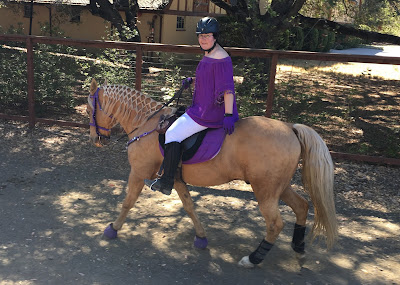 I actually had a long skirt bottom that was part of this costume. However, I put it across my saddle when we were starting out. Dijon can be an absolute nutcase when others horses are in front of him so I wasn’t sure if I’d need to jump off quickly and I didn’t want to get wrapped up in a skirt while trying to do an emergency dismount. I lost it within a 1/2 mile of the start (I found it on the way back). 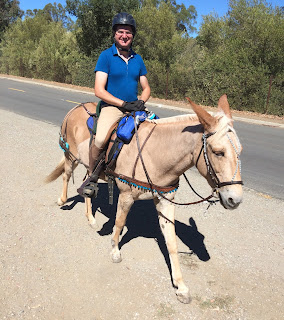 After #8, we rode down Olive Hill lane, which was lined with Olive trees and some yards had full olive orchards. I don’t think I’d ever seen olive trees before. One of the really nice parts of this ride was looking at all of the fancy mansions. Most had fancy barns, many had tennis courts and pools. Vineyards and orchards also abound. It’s like  and episode of Lifestyles of the Rich and the Famous.

As we headed back to the mounted patrol, we passed the Woodside Store, which is a historic museum I’ve been meaning to stop at as historical stuff like that is endlessly fascinating to me. 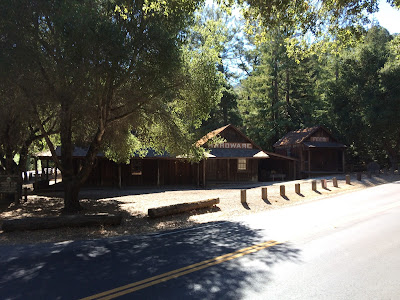 When we got back to the mounted patrol, we tied the ponies up and went to turn our maps in for our goodie bags. Once you turn in your checked off map, you get another little map/card of the sponsors. Then you have to go around to all the sponsors tables and have them stamp your card before you can get your goodie bag. It’s a great way to force everyone to actually visit with the sponsors. There were a good mix of sponsors too: some vendors like a horse massager and a natural horse products vendor as well as organizations like mounted search and rescue and San Mateo’s Horseman’s association. I really wanted a Woodside Day of the Horse t-shirt, but they were red and I hate red.
The goodie bags were awesome though; completely packed full of stuff. There were also a ton of flyers and advertisements in the bag. The hat in the picture is sitting on a big sponge, which was awesome as we lost our sponge just the day before. 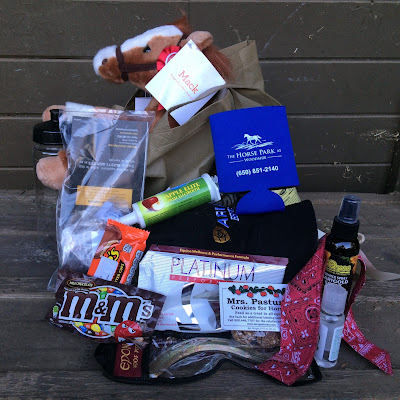 We didn’t stick around for the costume contest as I figured we were not winning given the other amazing costumes I saw all day. We were also hungry and the meal available wasn’t something I could eat (I have a bunch of weird food requirements). 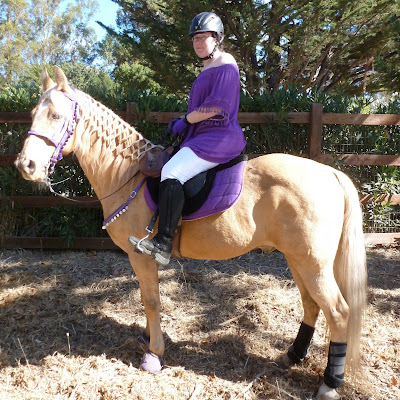 All in all, it was a really great ride and a lot of fun. I was very impressed with both Dijon and Nilla. Dijon tolerated other horses moving away from and towards him without losing his mind. Nilla tolerated lots of stranger rubbing her ears and jangly coins dangling from her reins (I attached these so that they could be ripped off if she objected, but she didn’t care). I would highly recommend it to anyone local. It’s all walking only (which is why Dijon got to go) so you don’t need to be into endurance to do it. A lot of people just ride in their regular dressage/hunter/western riding gear so you don’t need a costume or anything fancy either. And all the funds go to preserving horse trails and horse culture in a country which is rapidly losing its connection to equestrianism. 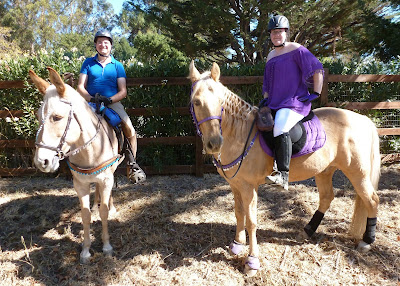 10 thoughts on “Woodside Day of the Horse”