The full show recap is going to be a two-parter post because otherwise it would be way too long.

Before this weekend even started, the show was looking to be a logistical problem with my husband away. I don’t like trailering by myself and even if I enjoyed it, everything takes a lot longer when solo. I went back and forth on just trailering in on Sunday vs stabling overnight. While there were classes on Saturday, I was not up for showing both days, but I did like the idea of leaving Nilla there overnight so that I could sleep in a bit on Sunday and just arrive in time to warm up and show instead of having to wake up super early and trailer over.

I finally decided to do the overnight option. Then on Thursday night, one of my dogs, Ceili, broke one of her dewclaws. She has done this multiple times before and the vet warned us last time that if she did it again we should probably get them permanently removed. On Friday, we took her to the vet and the vet – a different one at the same practice – also advised permanently removing them. It would be a much more invasive surgery and require a more complicated recovery, but we decided to get it done.

Now I was not only looking at a horse show without my husband for help, I was also in charge of taking care of a recuperating small dog on the equivalent of stall rest. 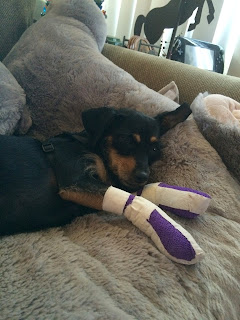 I packed up and headed over to the horse park Saturday afternoon. I checked the stall assignments board when I arrived, but we weren’t listed. So I had to leave Nilla on the trailer in 90+ degree heat while I went and dealt with the show office. And they did not know what was going on. I was in the system as requesting a stall and shavings. We finally determined that I could have one of the empty stalls and I went off to put her away. They called me while I was getting Nilla to tell me they could not provide me with shavings as the mess up meant none had been ordered for me. So I had to carry over the half full bag of shavings from my horse trailer. 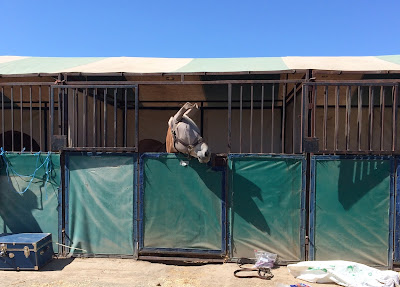 At this point, I was seriously contemplating packing up and just going home, but I’d already paid so I just dug in and got it done. I hopped on Nilla and we rode around the horse park checking things out and letting her calm down. We went over to the warm up ring and practiced our trot to halt and walk to halt transitions. Which were perfect. Nice and straight and stepping under. She was being really good so we didn’t drill anything. I returned her to her stall and went home to take care of the dog and clean tack.

Sunday morning I woke up early to feed the dog, give her her medications and then lock her up with the cone of shame on. My friend joined me and we drove off to the show. I grabbed Nilla’s haynets from her stall and then drove over to the trailer and loaded her hay and all of my tack into the truck and took it back to the stabling. The stalls and trailer parking were a good half mile away from each other which was pretty annoying. Luckily, the two stalls next to me were empty so I claimed them as tack stalls.

My dressage times were 9:30 and 10:02 so I waited to get on until 9:00 as I didn’t want to spend too much time warming up. Before I could ride I had to get my boots on. They had only arrived on Friday and, as new tall boots are required to be, were insanely uncomfortable and also so tight that I could not get them on myself. I actually texted my friend on Friday to tell her that the additional assignment of zipping me into my boots was being added to her list. My hatred of these boots and the reason they arrived so late is a whole long story that maybe I’ll go into later. At one point I had two people simultaneously struggling to get the damn things on my legs.

As I was about to get on, a group of people from my barn arrived. It’s a very small barn and the 5 people who came to cheer me on own 6 of the 13 horses at our barn. My husband and I own 3 more, so it was practically the whole barn. I love having such a nice, supportive barn. Since they were a bit early, they went up to watch the jumper ring while I warmed up Nilla.

Nilla and I went over to the warm up ring and discovered that all the halt work we’ve been doing – for over a month since the last show where we flubbed this – had completely gone out the window and halting in a straight line was just not possible. Hating on Saturday had been perfect. Halting on Sunday? Not pretty. While drilling probably wouldn’t have solved this anyway, we didn’t even have time to drill halts so I did what I could before going over to wait for my time. Then we had a panic moment where I realized I had forget to put my number on and my friend had to run back to the barn to grab my string so I could tie it on. Stupid hunter numbers. I like the eventing style ones that go on the bridle.

Intro A was first and I felt like it went okay except for the halt. And the score sheet confirmed my feelings. We got mostly 7s and 8s except for the final center line and halt which we got 5.5s on. The judge’s comments were “unfortunate jigging, corrected” and “sideways in halt at 1st, corrected.”

I’m not even sure we deserved a 5.5 for this travesty of a halt. We also got points off during one of the circles for “tongue out.” My trainer recommended putting deodorant on Nilla’s cheeks to keep her from putting her tongue out, but that didn’t work. Because so many of the pictures are blurry, I don’t have a great shot of her tongue out in the test, but here’s one from us trotting around waiting for the bell to ring.

Unfortunately, submission is a double coefficient for Intro and her tongue plus jigging and not halting got us only a 6 there. Our final score was a 69%, which is respectable and got us second place – I think there were 3 of us doing that test.

We went down to the little warm-up area to wait for our next test. I alternated between looking at the test on my phone and practicing trot to halt transitions. They were still ugly. Every halt resulted in an immediate swivel of the back legs out to the side like she wanted to start a turn on the forehand. I could not fix it in the 20ish minutes between the two tests. And I had to stop pushing it after she started getting really pissed off about the whole thing. We will take this up – again – at home, but I needed her to not have a meltdown right then and there so I gave up.

Intro B has two trot to halt transitions. The first one got a 5.5 and the comment “side steps and crosses front legs at halt.” The second halt got a 7 and no comment. I didn’t feel like it was a good halt so I’m not really sure what happened there. Our score for this test was a 68.75% and first place (out of 4 entries I think). 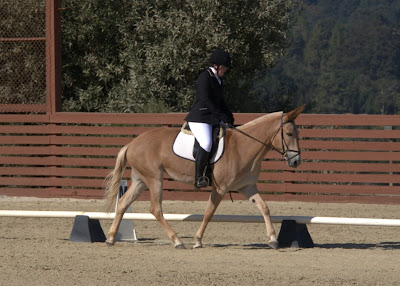 I though the rest of the test went really well. One really nice thing we had going was our free walks. I could actually feel Nilla stretching down in them. Which we have not even had success with at home, so I was really surprised to have her offer it here.

On both tests, the judge commented that the stretching was good, but she needed to take longer strides. This is good advice. I’ve been so caught up in just trying to get her to stretch at all that I’ve never even paid attention to her stride. We do need to work on moving out a bit more.

Nilla got lots of pats for being a good dressage mule and we all headed back to the stalls to let her have a break from riding and let me have a break from the damned boots. Fig, from Topaz Dreams, had come up to the show to meet with us, but I didn’t see her until after dressage. She came back to the stalls with us as well. The adults from my barn went back home, but the two college girls, Fig, and my friend stayed. We had quite a bit of time before the hunter classes so we went to sit in the shade and watch the jumper classes. Hunter class post is to follow as this one is already way too long.