On Sunday, my husband had plans to do a full-gear training hike with his friend in preparation for their backpacking trip. As I think mules are for hauling gear through the wilderness, not my back, I was not participating in either the training hike or the backpacking trip. I needed to do some conditioning work with Nilla though, so we tagged along.

And by tagged along, I mean drove to the parking lot together and then I rode entirely on my own while they did their own hike. As we were driving over, the radio was warning everyone about the heat wave. The whole bay area is under heat advisory and there is also an insane amount of smog (the heat has basically trapped every bit of exhaust and smoke in the bay and it’s difficult to breathe or see very far.) The radio was warning everyone to stay inside, drink lots of water, don’t do anything strenuous. So, a conditioning ride sounds perfect, right?

We got to the parking lot around 10am and tacked Nilla up. My husband helped as his friend was a bit late arriving. Eventually they all took off on their hike and I finished booting Nilla and filling my water bottles. I have the EasyCare Stowaway Western Cantle Pack Saddlebags, which I really like for having two water bottle slots. However, the water bottles that come with it are absolutely terrible, so I bought some camelback water bottles to try out. I really liked them today so I will be switching for good. 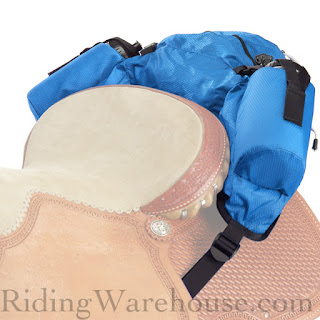 I attach these to the front of my saddle instead of the cantle so I can more easily grab the water bottles. I am pretty convinced this design would be terrible on a western saddle’s cantle. You’d have to twist around behind you to drink.

Anyway, we finally took off and soon passed my husband and friends. Wunderlich is lovely, shaded, and cool, but it was still insanely hot so Nilla and I were very quickly drenched in sweat. But we carried on. She was actually moving along really nicely. Sweaty, but not struggling in the heat. I had the heart rate monitor on and she was fine (though I suspect my heart rate monitor was not working correctly as it would sometimes report 0 while trotting and then 160 even though we were walking). Most of the time it seemed to be working though.

The haze was intense. It’s hard to show since I don’t have a comparison shot, but all the brownish gray above the tree line/horizon should be clear and there is normally a view all the way out to the east bay hills. 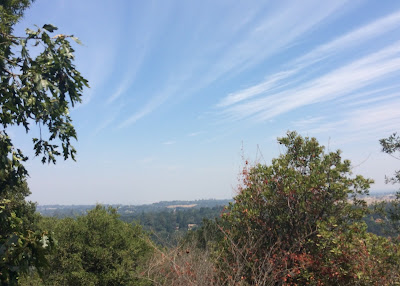 The park was also packed. I’ve never seen this many people. And we passed a lot of people even up in the high loop around Skyline Boulevard, which is a long hike on foot. Apparently a lot of other people decided to ignore the heat advisory as well.

Wunderlich is probably the best place to be if you’re going to be outdoors. The shade and the breeze keeps you decently cool. The big redwoods really keep the temperature down. We stopped briefly at the one redwood grove and it was seriously 10 degrees cooler in there.

As we neared the parking lot coming back Nilla decided she wanted to go left at a fork in the trail. I wanted to go right. This resulted in a tantrum like I haven’t seen in months. She basically refused to turn right. Like, not even her neck could bend in that direction, let alone move in that direction. I tried circling her around left but still ending the circle facing the right hand trail. We spun in circles for a while until all of the hikers were out a view and I could wallop her with the crop. She finally consented to go right. Then about .1 mile later, we reached a second fork in the road and the whole thing was repeated. This section of trail wasn’t wide enough to circle so I had to get off. Even off, she would not move down the damned right hand trail. I again had to wait for hikers to be out of site and smack some sense into her.

The weirdest part of all of this is that this last part is the same trail we took just last weekend. She just did it a week ago and knows it goes back to the trailer. I could almost see the argument had she wanted to go right and I wanted left. There would have been a reason for that. But she was refusing to go towards the trailer. I ended up walking for nearly a mile dragging Nilla along. Even on the ground, she needed frequent reminders about following and ape trying to stop or turn around. I tried remounting a few times only to have to get off and repeat the dragging process. I finally got on about a quarter mile from the parking lot and managed to stay on.

I seriously do not know what this problem was or how I would solve it during an actual ride. If I do another 25 without Shasta, I won’t have someone else there to lead on if she has a fit like this.

The ride was about 11 miles with an elevation gain of 1,782′. We finished it in about 2.5 hours, which is a little slower than our 5mph goal. But I spent a mile literally dragging a mule down the trail so our average speed without that was much better.
Also, it was so hot that I could – and did – wring out the sweat from the back of my shirt. There was so much sweat, it had run off the shirt onto my riding pants and my butt was wet with sweat as well. You can even see the sweat outline from my vest. If you look closely, you can see that my armpit is actually dry so the biggest issue was the vest. 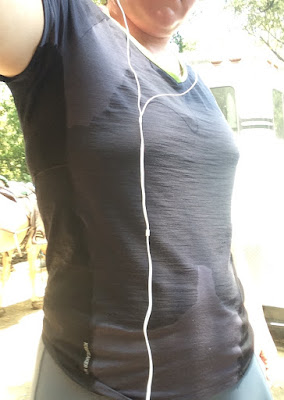 Back at the trailer, I stripped her tack, gave her water, and let her eat hay. I got a camp chair out of the truck and sat in the shade waiting for my husband to return. While I was waiting, the mother and daughter at the trailer parked next to mine returned. They were accompanied by another woman who had been riding independently of them, but had walked in the last bit with them as the daughter’s horse was possibly colicing. I lent them my stethoscope while learning what had happened.

Apparently the daughter’s horse had laid down with the girl on him on the last stretch down to the parking lot. The daughter hand walked the horse in and he tried to lay down a few more times along the way. The independent rider had come up behind them and ended up riding in behind them to keep an eye on the horse as the mom was leading. Turns out she was one of the woman we had camped with at Joseph D. Grant and remember me and Nilla.

As if that wasn’t enough of a small world, I got to talking to the mother too and it turns out she was at Fireworks as well. She said she’s never going back to that ride after the way it went this year. Her horse got injured at the ride so she did admit part of it was bitterness and she might reconsider. She also wants to go to Quicksilver in October. So maybe I’ll see her there depending on the heat. The horse improved quickly while standing at the trailer. They probably hung out for an hour watching him eat and he started perking up and just looking a lot happier so they loaded up and went home. I hope the poor guy was okay.

Right after they left, my husband finally returned almost 2 hours after I had. He claimed he was going to finish the hike in 3.5 hours, but I knew that was never going to happen as he did the same trails I did and I was trotting. We loaded Nilla up and returned to the barn. While it was hot at Wunderlich, once we were out of the shade, it was unbelievably hot. Like an explosion of heat.

It was so hot at our barn that the glue on the duct tape holding the no trespassing signs to the gate had melted and the signs were flapping off the gate. The gate was so hot I could barely touch it to open it without getting burnt. Just standing outside mad you feel like you were being baked. We dropped Nilla off, parked the trailer, and went home… where it was also hot. Even walking from the house to the car to get dinner was sweat-inducing. I don’t know how much more riding will be occurring before our lesson if this keeps up.

Don’t forget to enter my giveaway. Entries close on Wednesday.

One thought on “Wunderlich Round Two”