The only real downside to camping for me is the early mornings. Thankfully, someone else had volunteered to feed the horses so we didn’t have to get up to early, but true sleeping in isn’t really an option. I eventually dragged myself out of the truck and headed up for breakfast. Two people headed out for an early morning ride and we were waiting for them to come back because they were some tack sharing issues.

This time we headed out on the same dirt road we drove in on. There were beautiful views from some spots and in others we were in the redwoods. 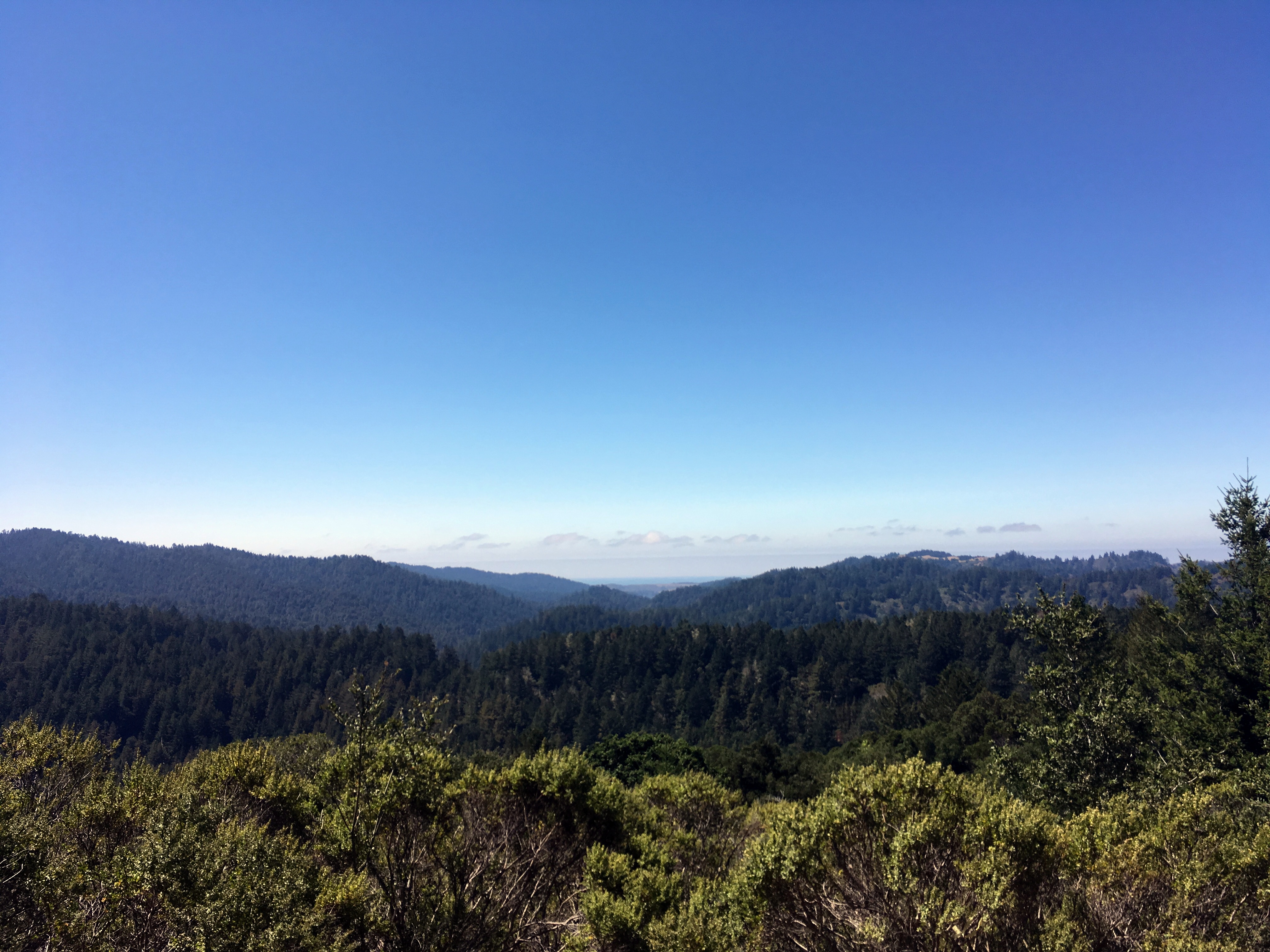 The redwoods were gorgeous and the trail was nice and wide, but it was steep. I ended up getting off and walking for most of the downhill. 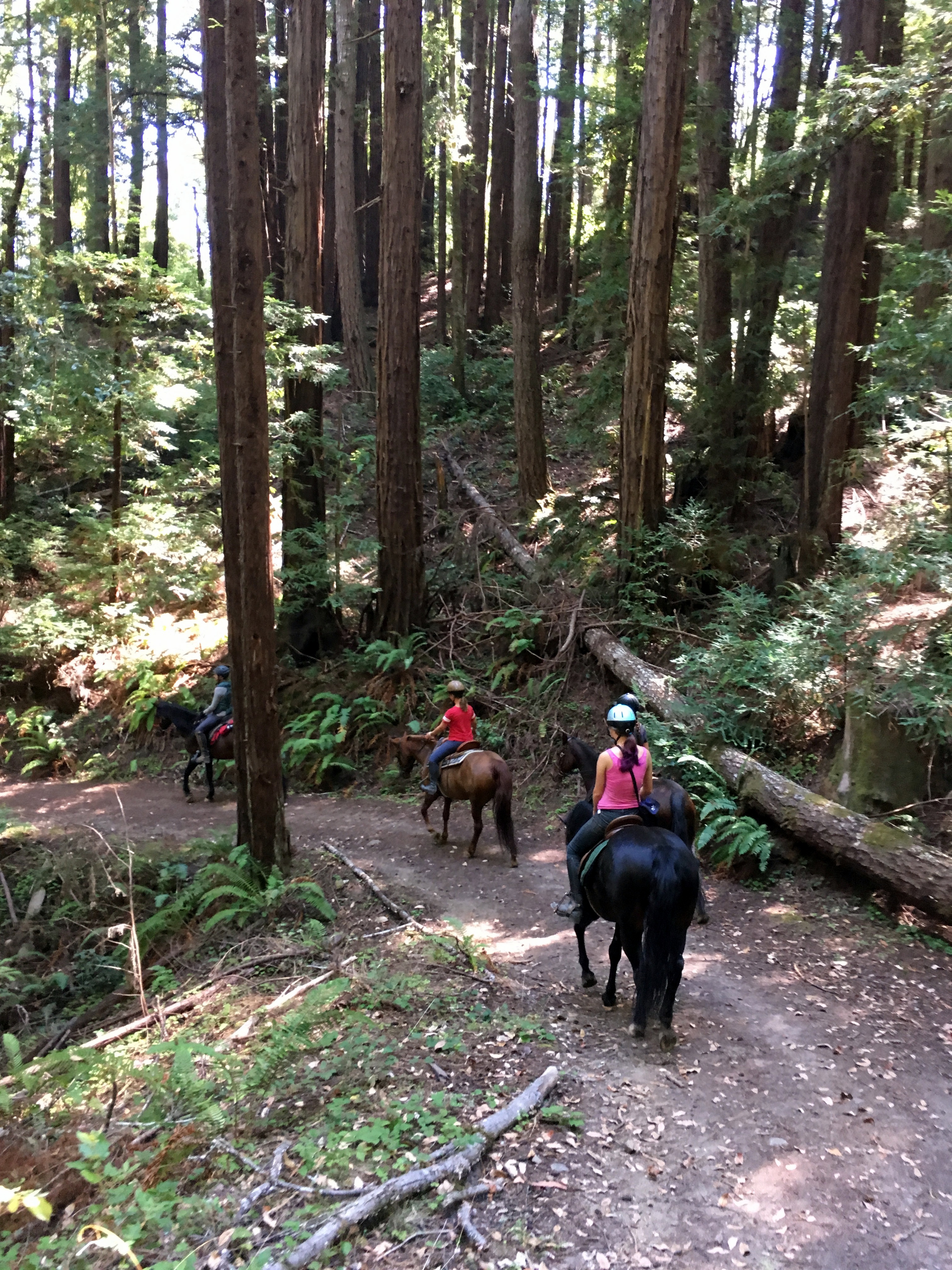 This picture wasn’t on a steep section. Once we reached the bottom, I remounted for the trip back up. Riding in a large group was not Nilla’s favorite. Shasta is a psychotic bitch of a mare and kept attacking anyone near her. Since some horses were slower than others, we kept having to stop to catch people up and then Shasta would pitch a fit. Nilla would contemplate jumping off the side or the trail and chaos would reign. As fun as this weekend was, I prefer riding out with just my husband. 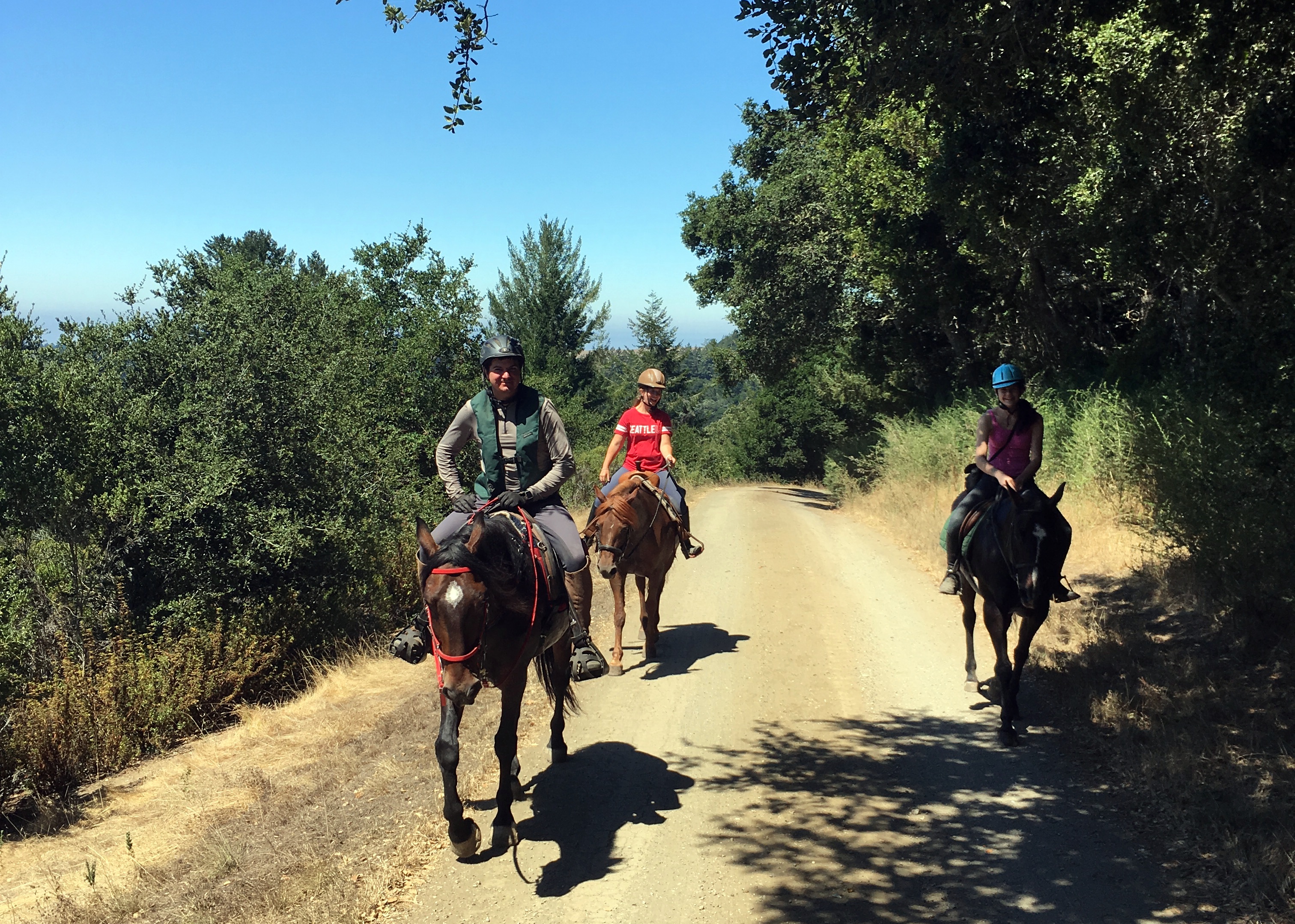 This was a shorter ride as we needed to begin the long process of trailering all the horses back to the barn. One load of horses had already been taken by the other trailer owner by the time we got back. We had most of our stuff packed in advance, so we just had to untack, rinse the ponies off, feed them their beet pulp, and load up. We were quickly loaded up and headed out. And this is where everything got really scary. Like I mentioned in Part I, the dirt road into and out of the campground is too narrow for two way traffic. So drivers are supposed to only go in between :00 and :20 and only exit between :30 and :50. They even have big signs at the beginning of each direction to remind you. 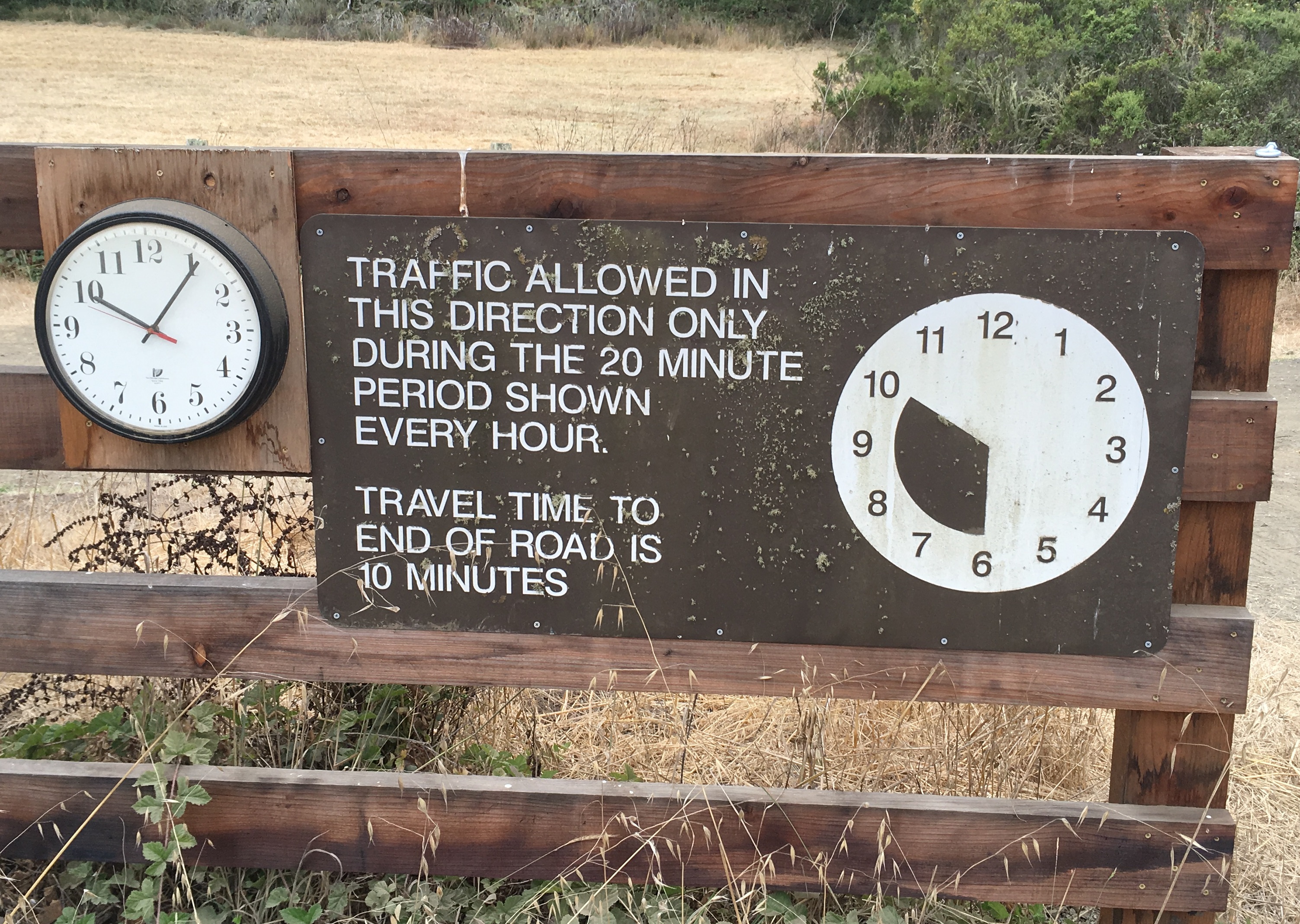 Well, as we were driving out, the other trailer driver from our barn was coming in. She had “forgotten” about the times. We happened to be at what I would say is the only spot it was wide enough for her to pass us. Most of the road looks like this: 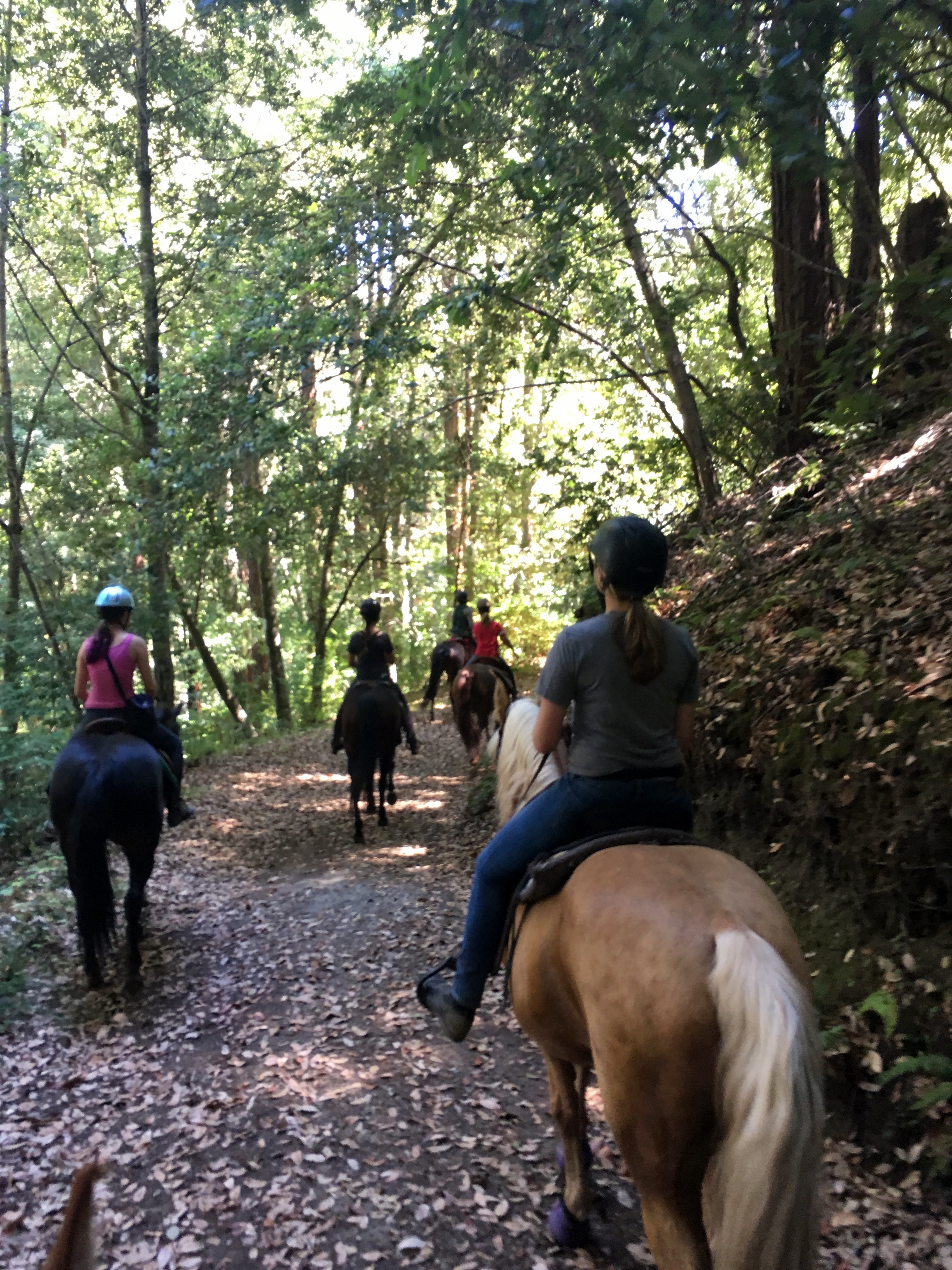 There’s basically no room for a second vehicle. And there’s no where to pull off. The section where she met up with us was here: 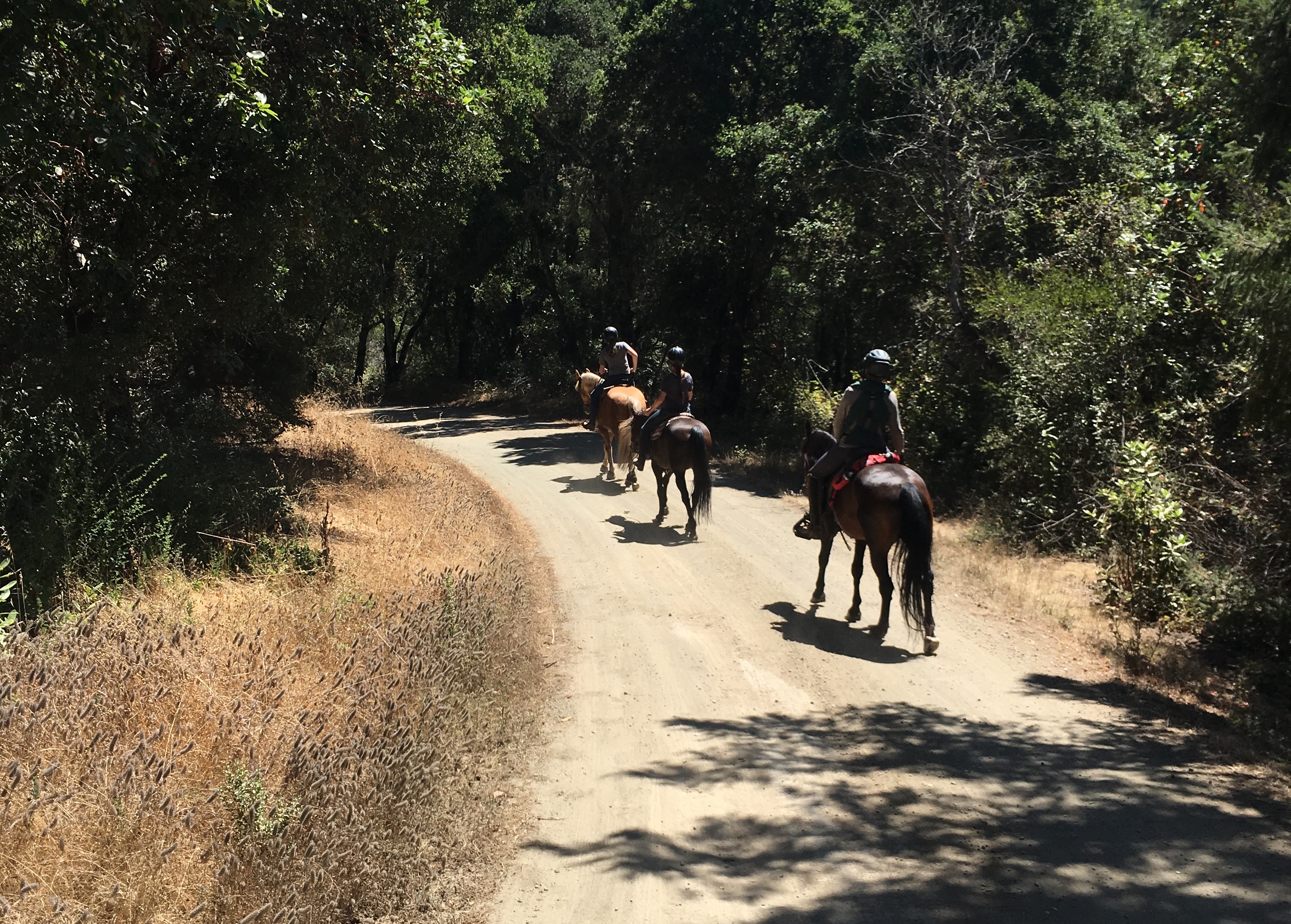 So she was able to pull into the grass on the side of the road and we didn’t all end up stuck forever. It was, quite honestly, really terrifying.

Once we passed her it got worse. The road winds up and down. It’s not terrible, but one section was pretty steep and it’s dirt with a fine layer of gravel, which really just creates a slippery effect. As we were going up the hill, I could feel like trailer sliding out behind us. And the truck with it. We were already in 4wd high, but tried switching into 4wd low. Still no go.

I ended up hopping out of the truck, and unloading all three horses, which let my husband get the truck and trailer up the hill. Before anyone thinks our truck is underpowered for our trailer, it’s really not. The truck is actually capable of towing much more weight. The slipperiness of the road was the problem. When we got new tires for the truck, we elected not to get off-road tires because we don’t do that much off-roading and those tires cost more and get worse mileage. In hind-sight, that was not a good decision. When I got out to unload the horses, one of the SUVs behind us was skidding backwards down the hill too. It wasn’t even towing anything; it was just slipping on the dirt and loose gravel.

I’m so, so happy that we were able to get out of there without any trouble. We also arranged for the owners of the other three horses to meet my husband in the main parking lot on his return trip so that he didn’t have to drive down that road again. Everyone, horses and people alike, were able to return to the barn safe and sound. And despite the terror on the way out, it was a great weekend. 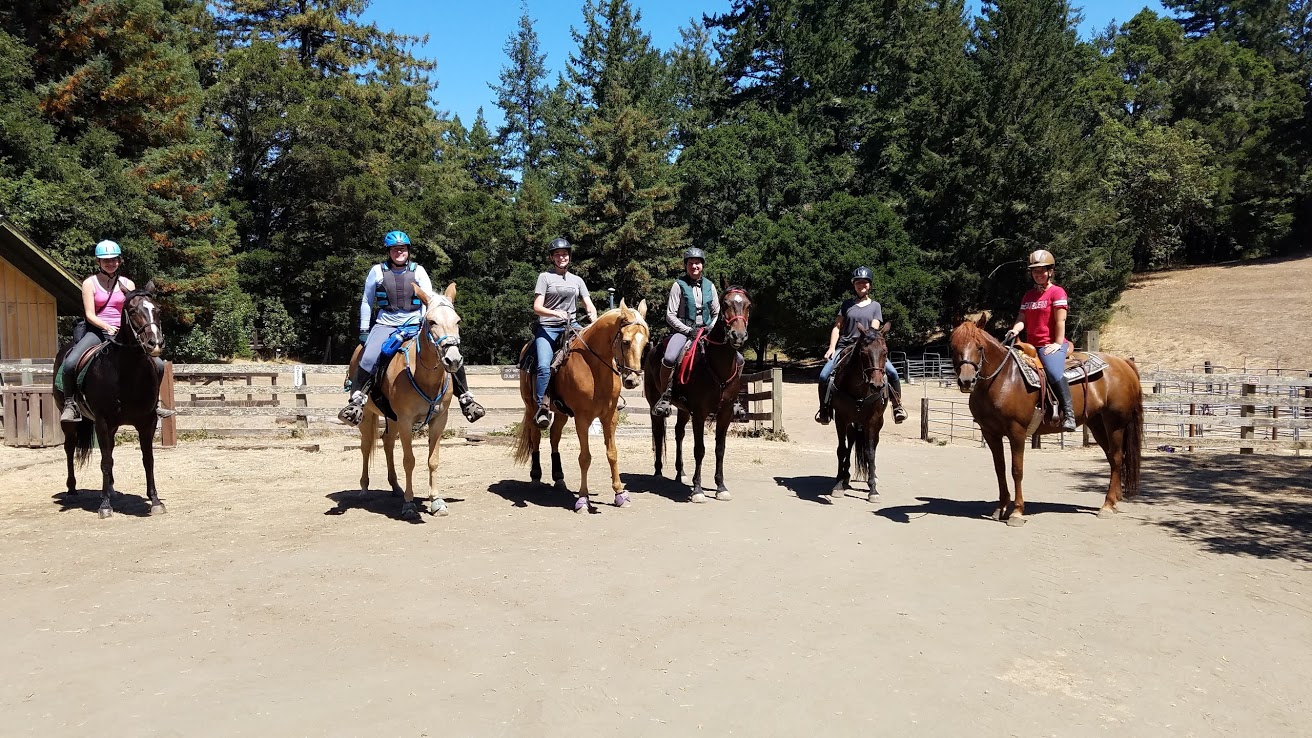