Blog Hop: Bit of Luck
I think that we all have those tried and true bits in our collection while others we just steer clear of. Are there any bits that work like magic for your horse?
I wish I had a magic bit. Something that my mule actually likes. Alas, I do not. I do, however, own an entire tupperware bin filled with bits. 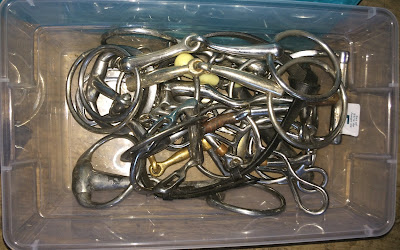 Not pictured are the bits on the current bridles (a french link baucher on Shasta’s bridle, a brass french link on Nilla’s, and a copper roller curb bit on Dijon’s, and a gag bit on a spare bridle). We have tried multiple happy mouths, a mullen mouth, regular snaffles, french link snaffles, a wonder gag, various kimberwicks, some ported bits, and a Myler comfort snaffle.

Nilla hates all of them. The ones she has liked best are the copper kimberwick and the current brass french link. The kimberwick was used as a snaffle without a chain or hooks, but she seemed to like the copper. The brass snaffle I have on her now was my college horse’s bit; I’ve had it for over ten years. Shasta was using it before I stole it for Nilla because Shasta doesn’t care what bit you use. 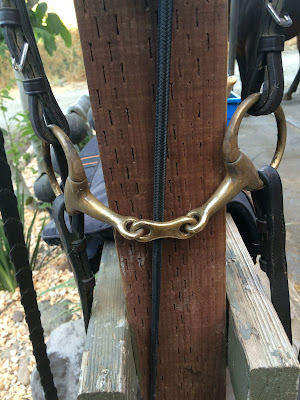 I’m still not 100% sure I buy into the different metals being anything more than a marketing gimmick, but Nilla really does like this bit better than other ones. Even a completely identical snaffle in regular steel isn’t as good as this one. I don’t know who makes it and I’m not even sure where I got it, but this is one bit I’ll be keeping.

Shasta is usually ridden in a Dr. Cook’s bitless bridle. She really only gets a bit put on for jumping lessons. Nilla goes in an S-Hackamore for trail riding. Nilla would prefer to never have a bit, but that’s not really allowed in dressage.

One thought on “Blog Hop: Bit of Luck”