We had a bit of downtime after dressage and before cross country so we went out to watch some of the prelim and training riders go. Camelot has a huge castle out on the course as a viewing platform and it was fun to watch people jumping through the castle from up above. We also experimented with different places to stand for pictures and found the hill across from the water to be the perfect spot. We were able to get pictures of every jump from there.

The cross country courses at Camelot were no joke. Some of the jumps were maxed out. The ones that weren’t asked some challenging questions. I was freaking out about my own BN and glad I wasn’t doing Novice. My husband was excited about the course though. He likes a challenge and he was interested in doing some new jumps. Coursewalk is here.

Although the whole course was pretty challenging, my husband’s big concerns going in were the ditch, the 11th jump – the dragon of Camelot, and the bench. We walked the course twice: once by ourselves and once with Kate to get her advice. I went out to the hill in advance to get pictures of Nicole as well as my husband so I missed their warm up.

The first jump wasn’t hard, but you had to come around a turn to it. Eugene hopped right over though. 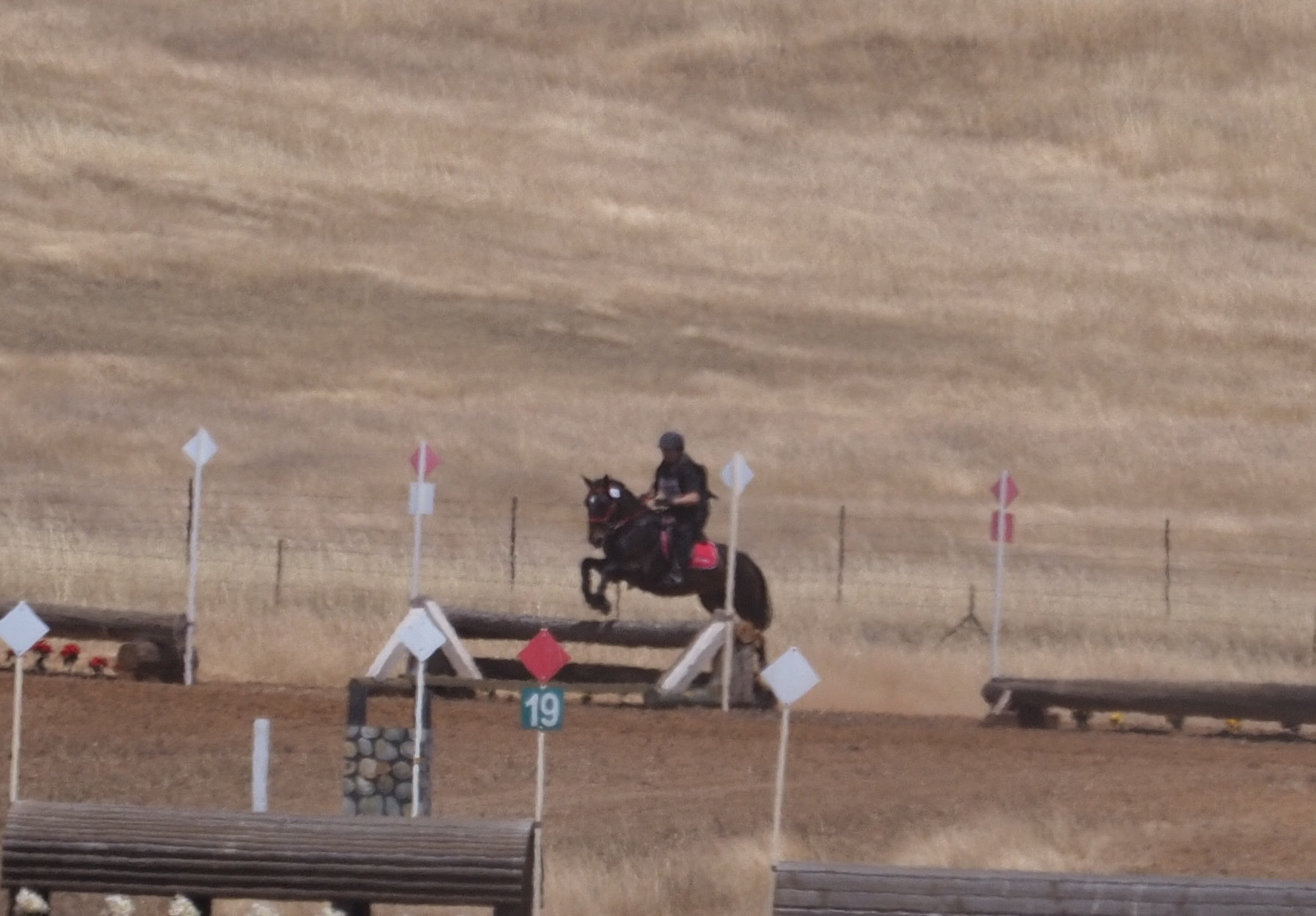 The second jump was a really cleverly decorated arrow, but Eugene thought that was very suspicious and backed way off. Even from like a 1/4 mile away through a super zoomed in camera I could see that he was backed off and I was muttering “hit him” to myself.

Coming off the second jump they looked to me like they were just crawling. The third jump was a huge table and I could not understand why they were going so damned slow to it. It turns out Eugene was lit and trying to gallop off so my husband was trying to check him up and get him rebalanced. Well, he ended up pulling him to a stop. 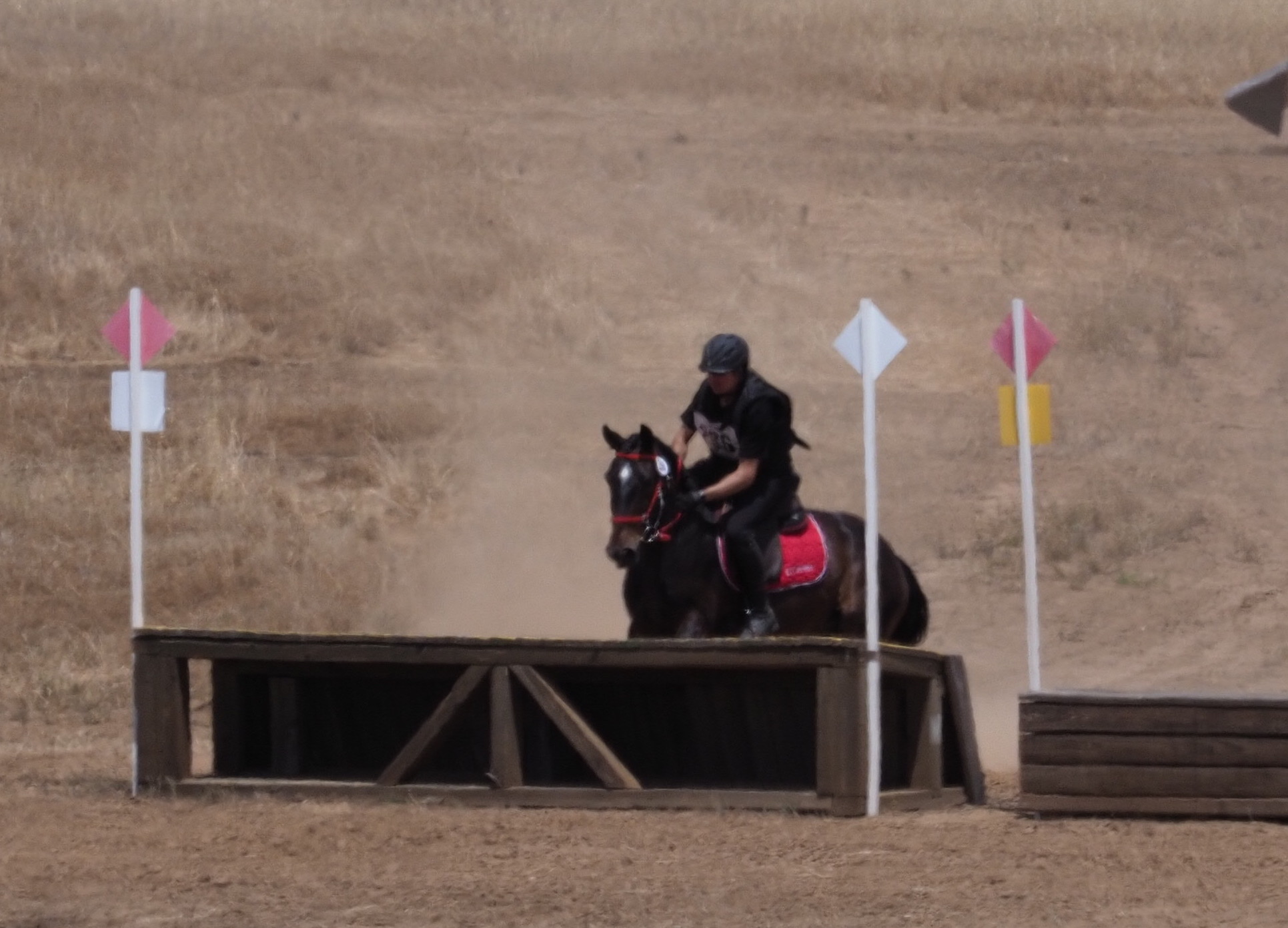 That’s the first stop Eugene has ever had on cross country. He’s such a game little horse if my husband tells him to jump something he will, but if he pulls him to a stop in front of a giant table, well, Eugene is going to stop. They circled around and popped right over it. 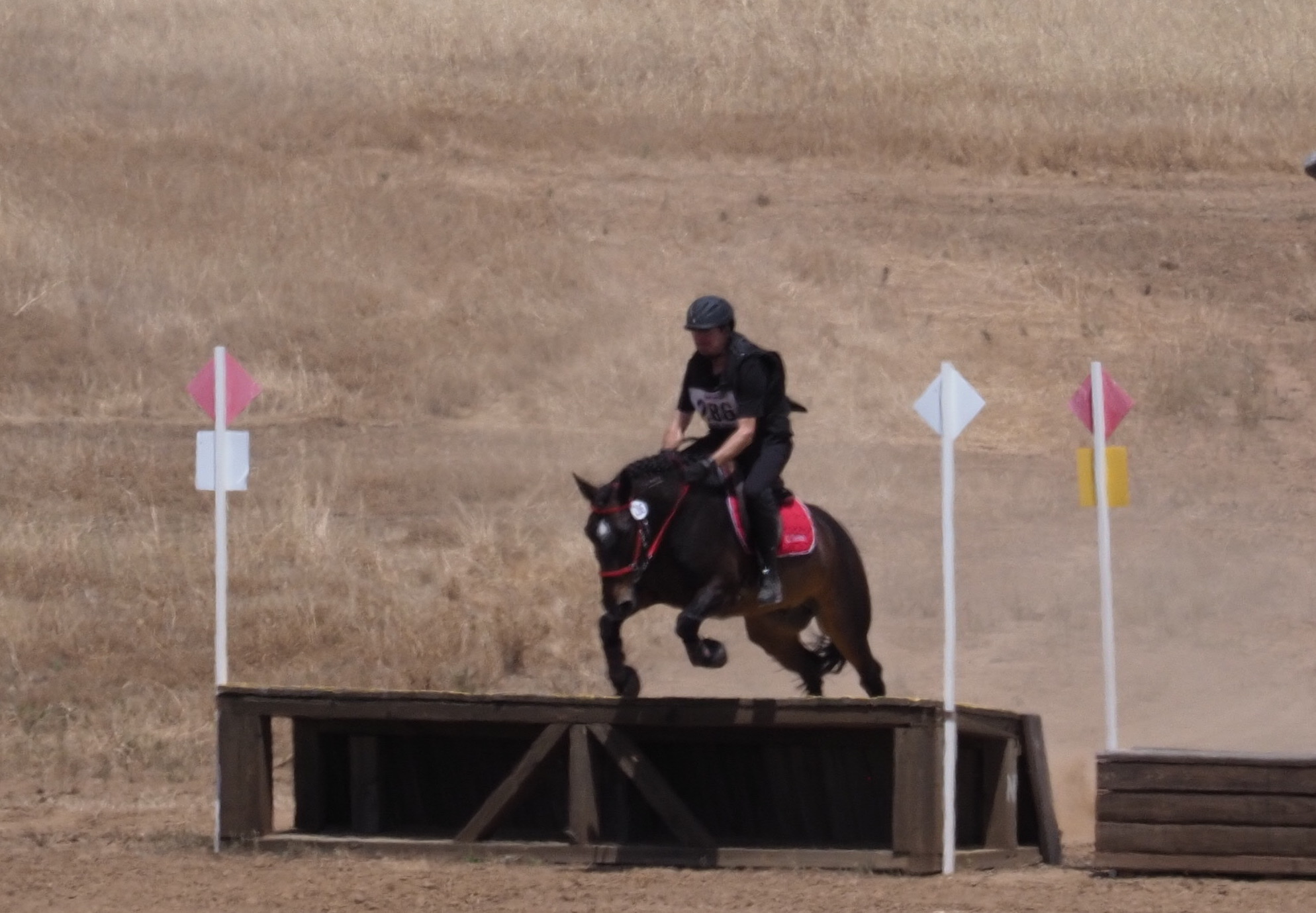 They galloped up the hill and soared over the bright pink steeplechase jump. I love how the angle of the picture makes it look like Eugene is jumping the big training table. 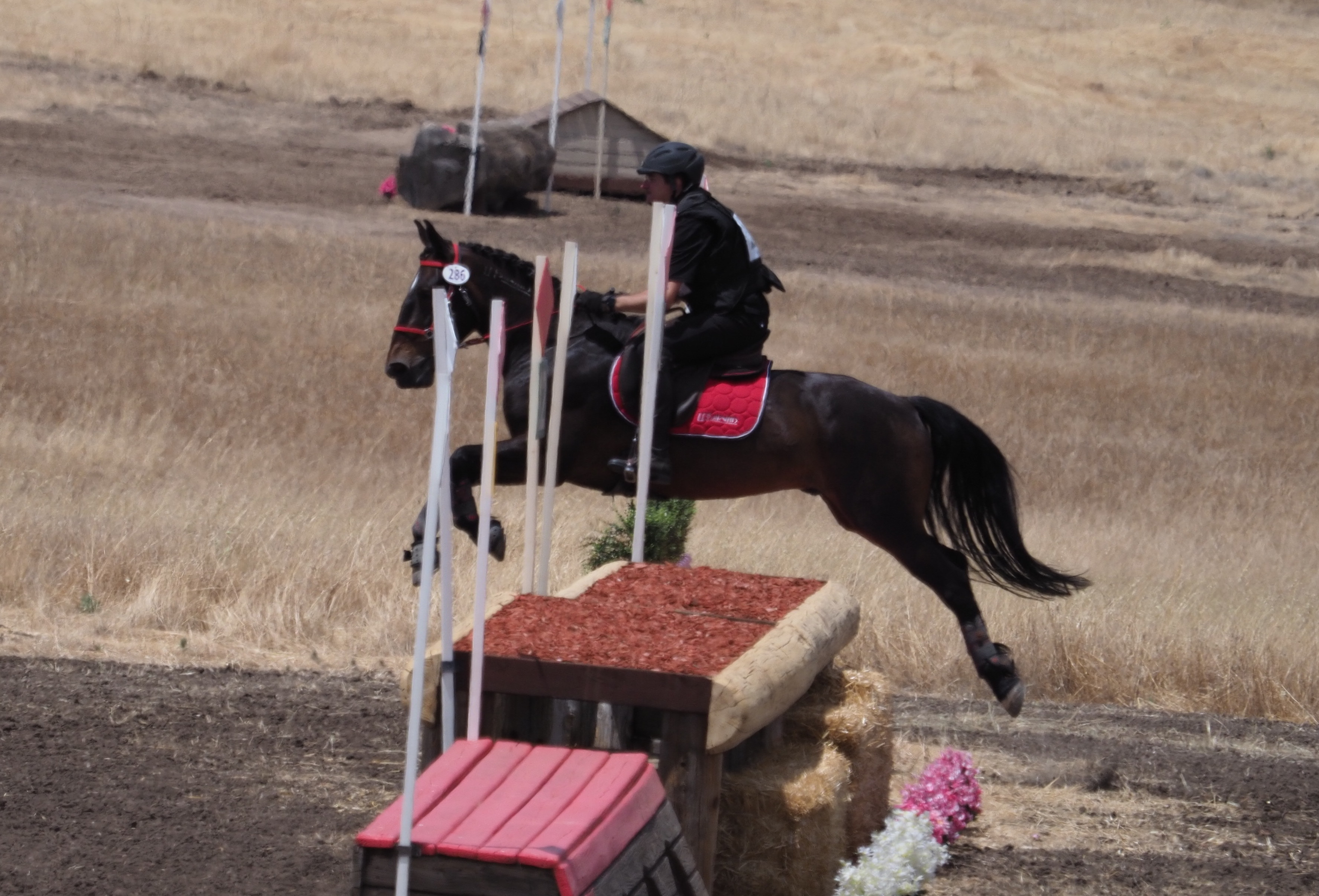 Then it was down the hill to the first combination – the Knight’s Table to the Maiden’s Table with water in between. 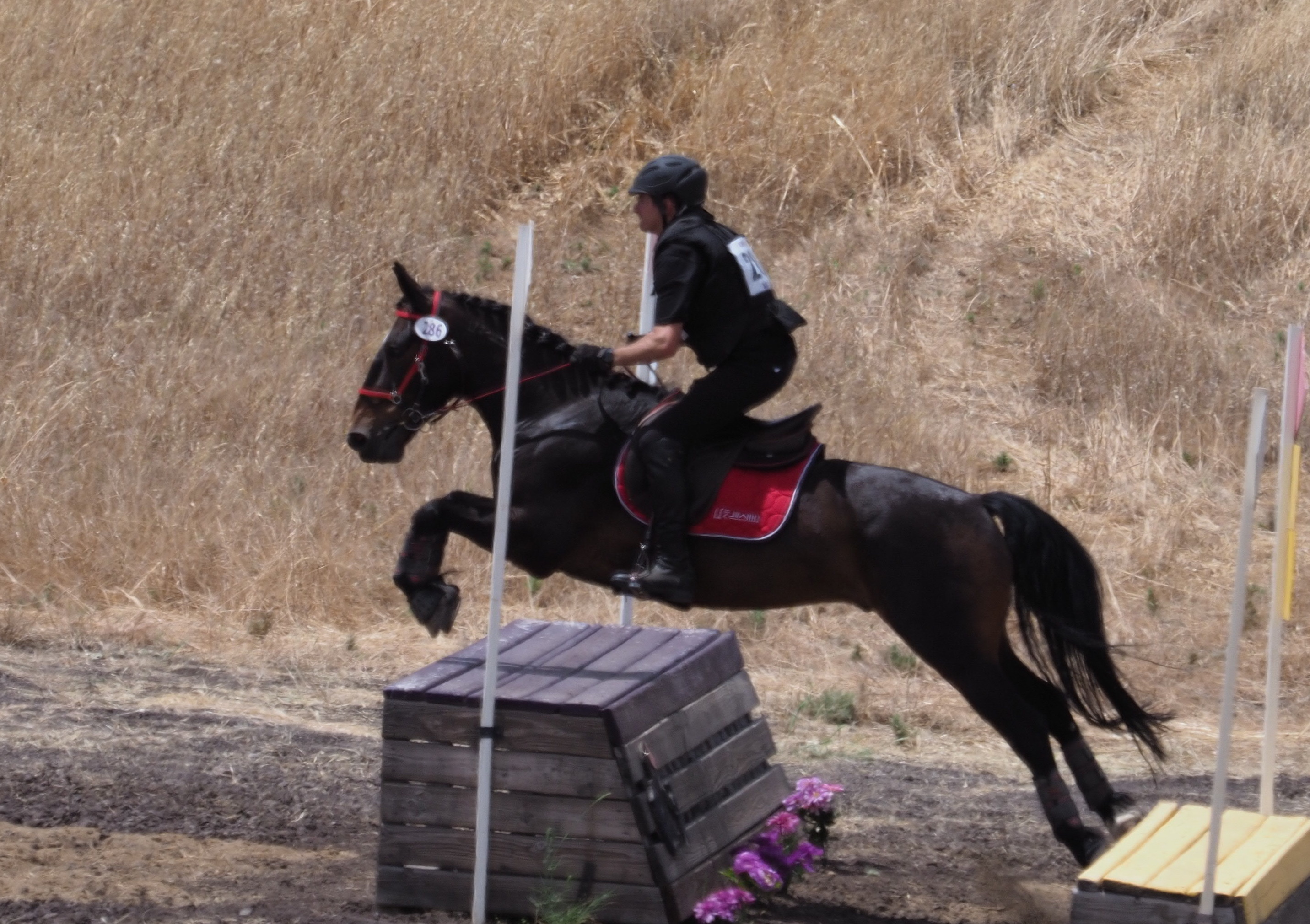 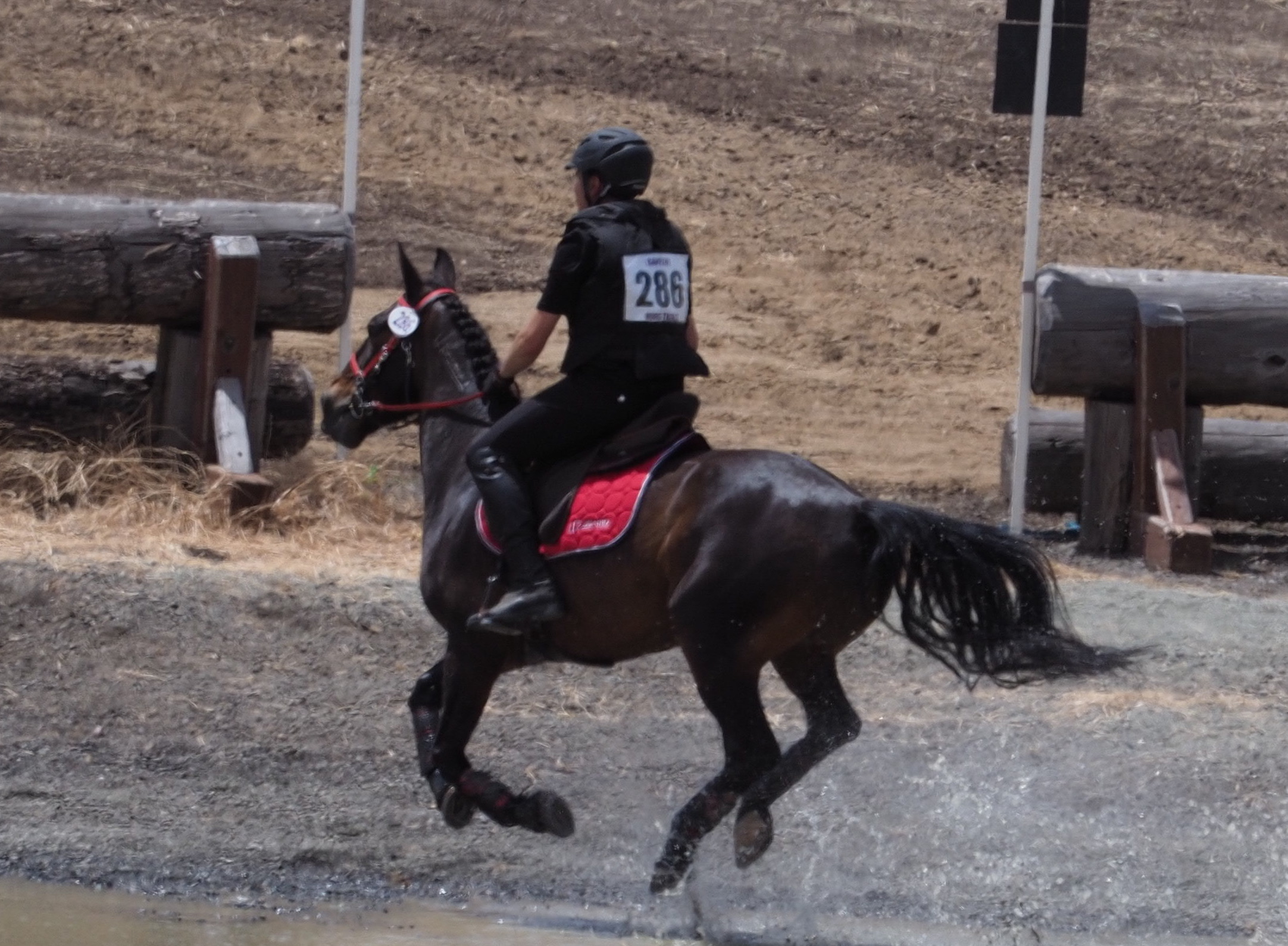 Four of the floor in the water 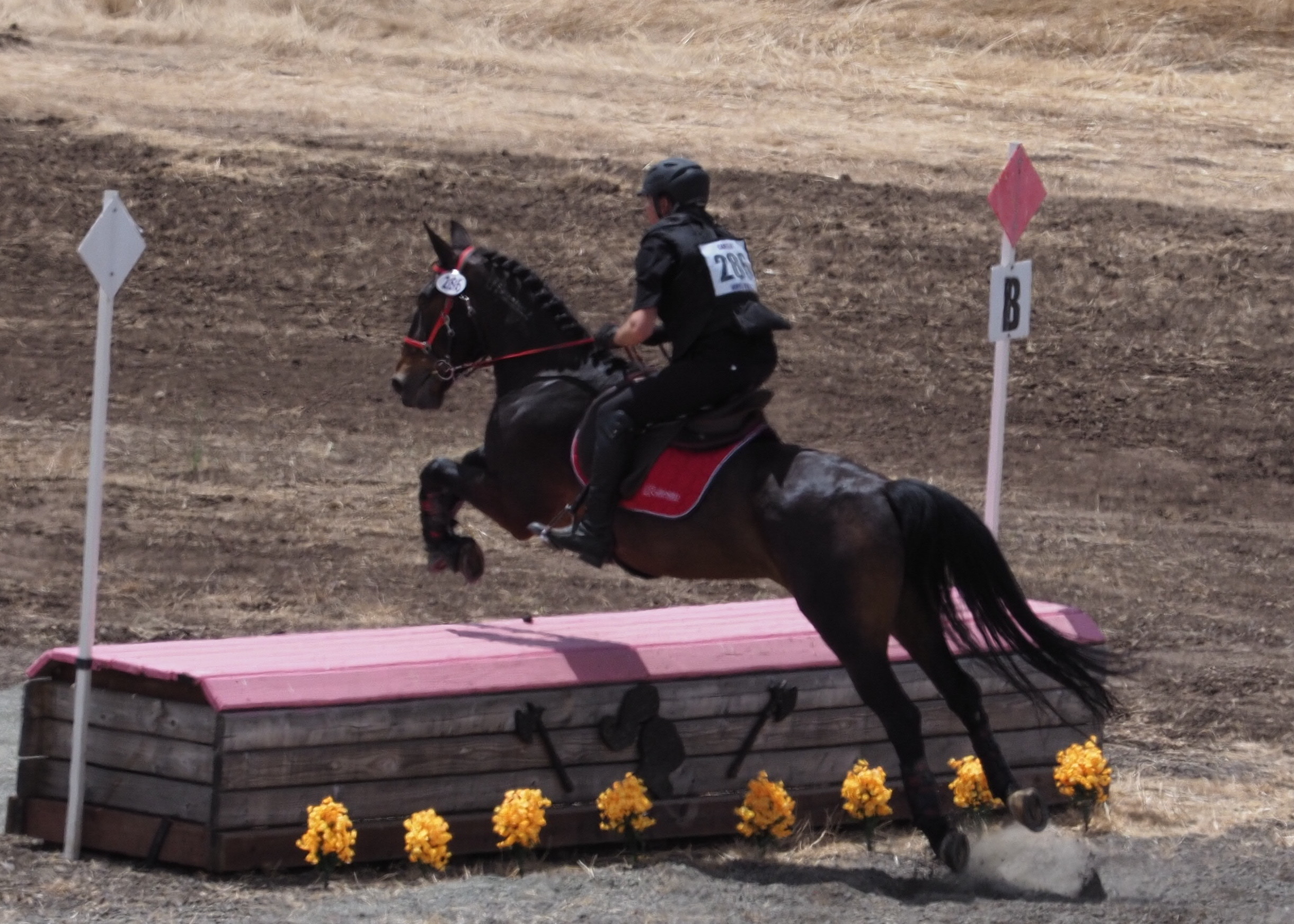 Jump 6 was a big battering ram’s head. However, it wouldn’t be safe to let horses jump the head of the ram, so they make it a skinny. I thought Eugene might find it a bit odd squeezed in between the flags, but he didn’t care about that. They did get a terrible distance to it though. 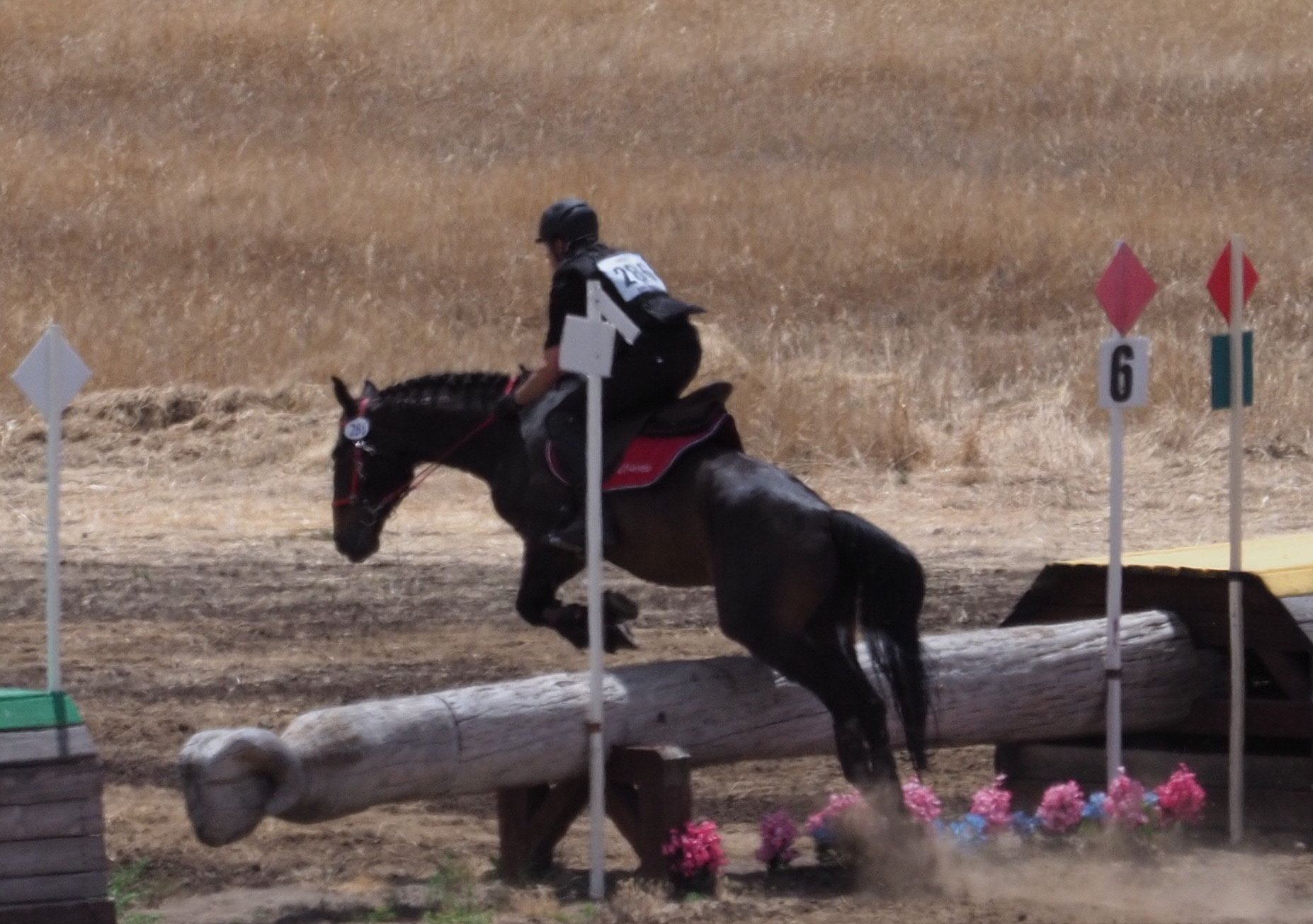 Next up was the Trekhener with a proper ditch beneath it. Eugene is pretty ditchy so my husband and Kate discussed strategy for this one, but luckily Eugene just locked onto the jump part and soared over.

The cabin with bending line to down bank combination was next. It was a tough question with a maxed out down bank. Eugene is awesome at down banks though so my husband really just had to get over the cabin before it and steer. 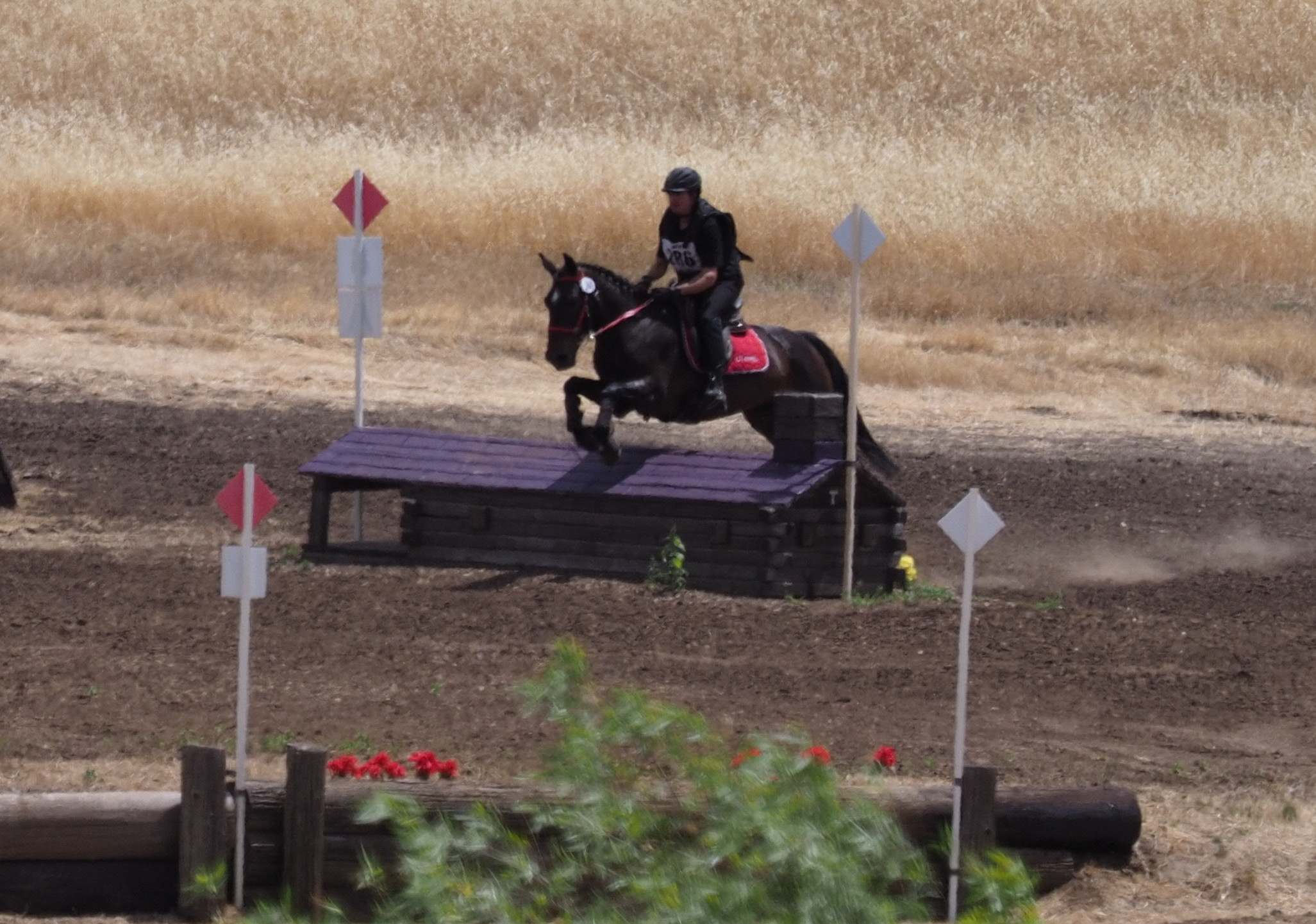 Downbank in the foreground behind the tree branches

Please note the T marked on the side of that cabin. This used to be a Training jump and they made it Novice. It’s not breaking any rules and would have been a soft jump at Training, but it is a big jump for Novice. The tree really blocked my picture of the down bank, but Eugene popped down it like the good boy he is. 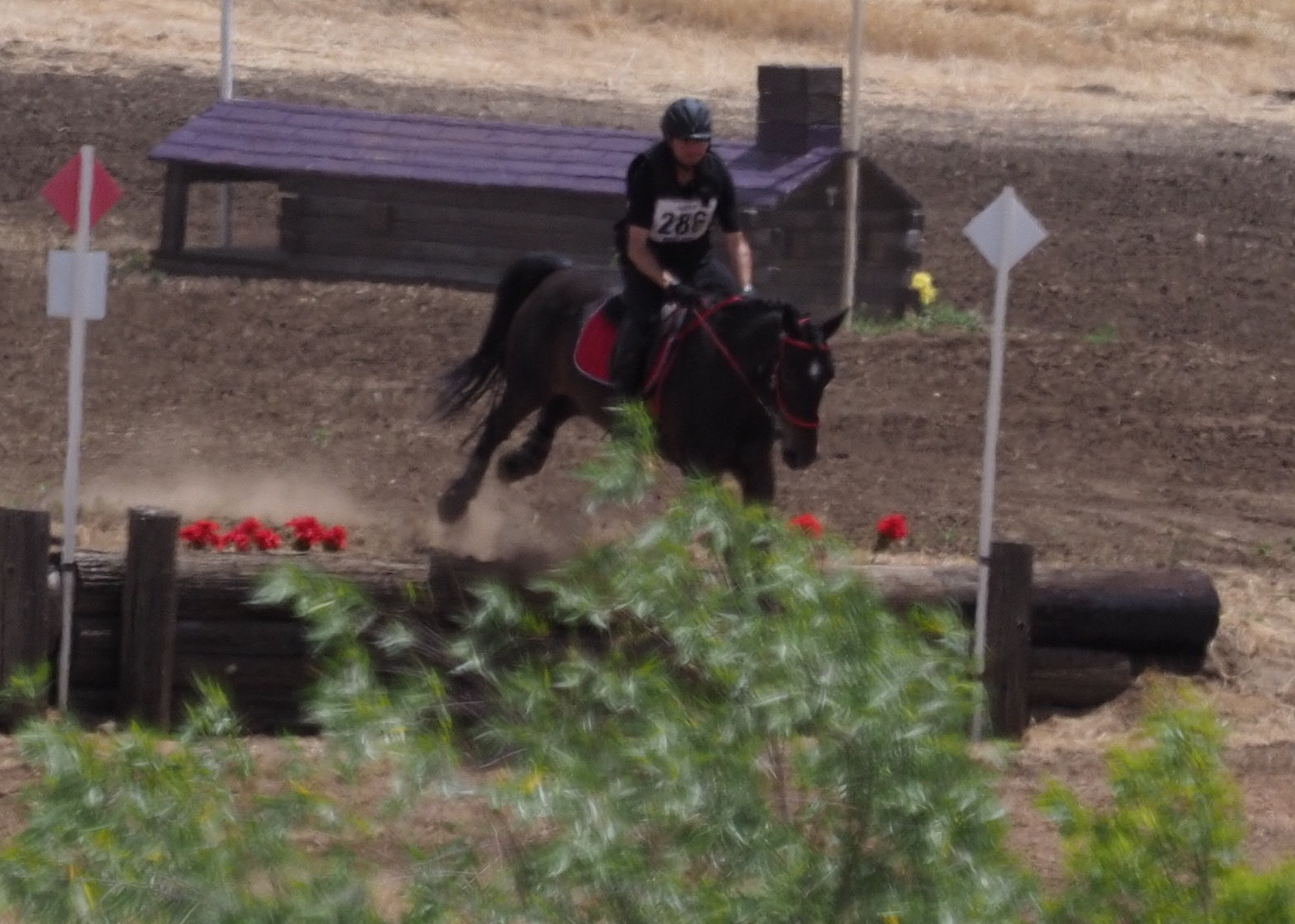 The water entrance was next. The surrounding banks made the entrance feel like a bit of a squeeze and Eugene backed off a bit, but he loves water so they never broke stride. 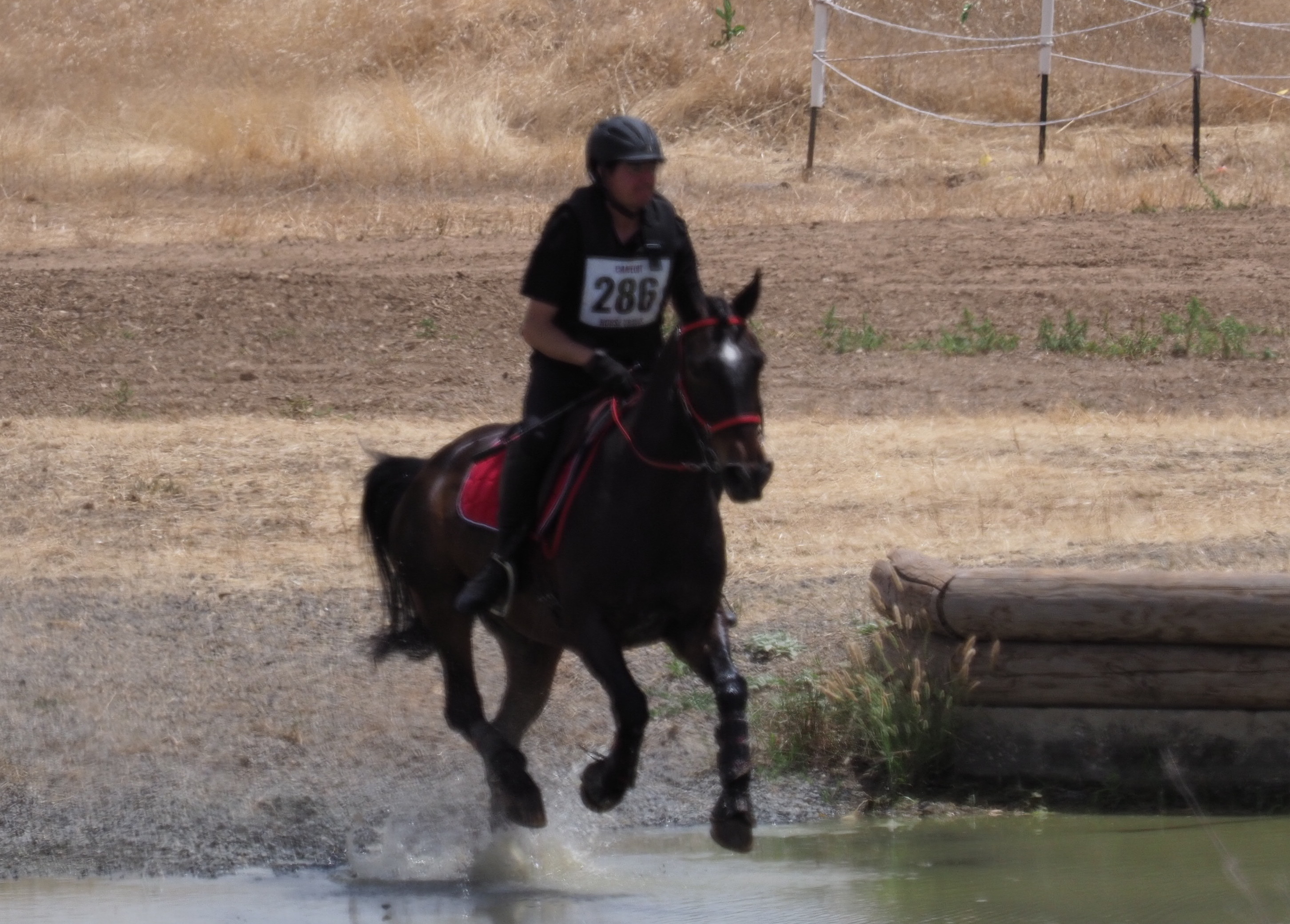 Through the water and just a few stride out to the striking green boathouse without a pause. 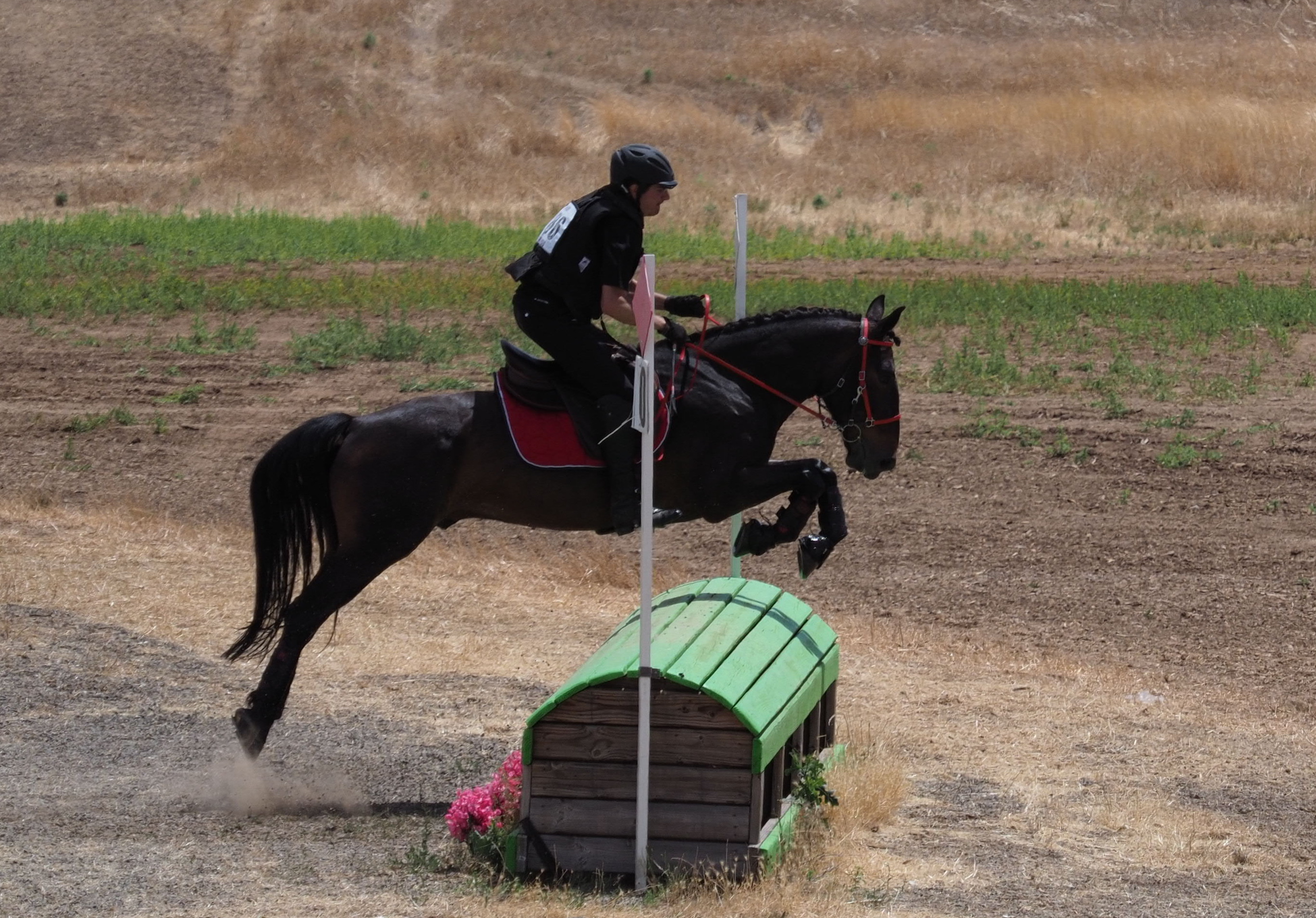 The next jump was the dragon. The Novice jump was in a C shaped section of the dragon’s body. The jump itself wasn’t worrisome, but my husband was really concerned about Eugene not wanting to go into the cul-de-sac of the dragon. Nicole and another girl we met while walking the course assured him it rode really well. I’m sure it does for normal horses. For normal horses, the sides sort of funnel you right into the jump. I think Levi would do it just fine. But Eugene was a Wild Mustang and he had a different opinion about that cul-de-sac of doom:

Poor pony was like, I do not want to go in there. He tried to stop, then decided to go and totally left my husband behind. I was so convinced they were going to crash, I flailed the camera all over the place. It was not pretty. 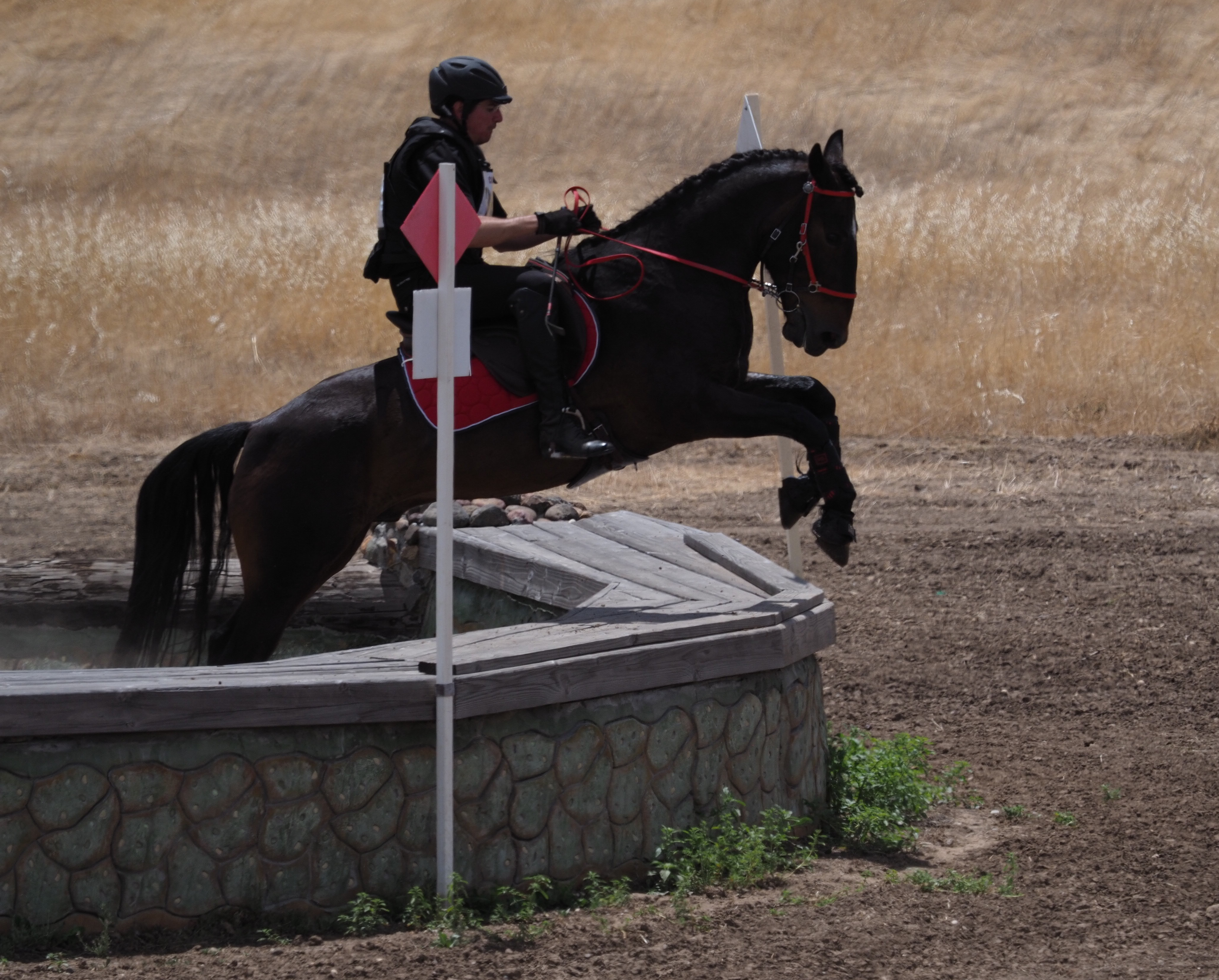 That little Mustang is worth his weight in gold though. While he’s certainly green and doesn’t know how to solve jumping questions for himself – which makes it hard for my husband who is also learning – he holds no grudges. After that disastrous jump a normal horse might be a bit suspicious of the next jump, but Eugene just pricks his ears and says’s let’s go. 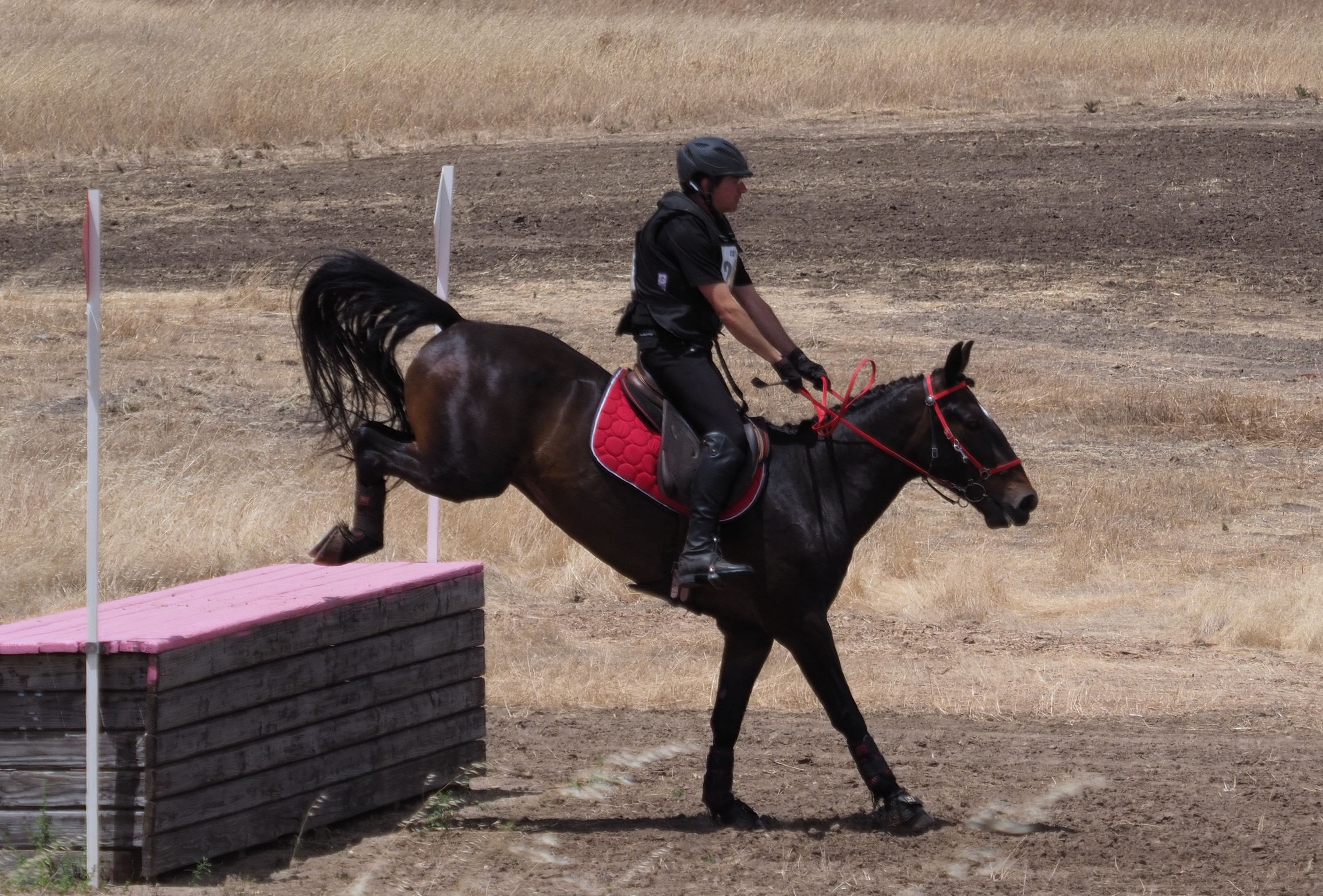 Eugene is doing so much better with ditches, but he still hates them. They got over the combination at Woodside just fine, but this time the ditch was first and my husband was a little concerned he might lose momentum going to the second part of the combination if Eugene backed off the ditch too much. Eugene took a hard squiggle and look at this one too, but then over-jumped it and powered up the hill to the Chevron jump. 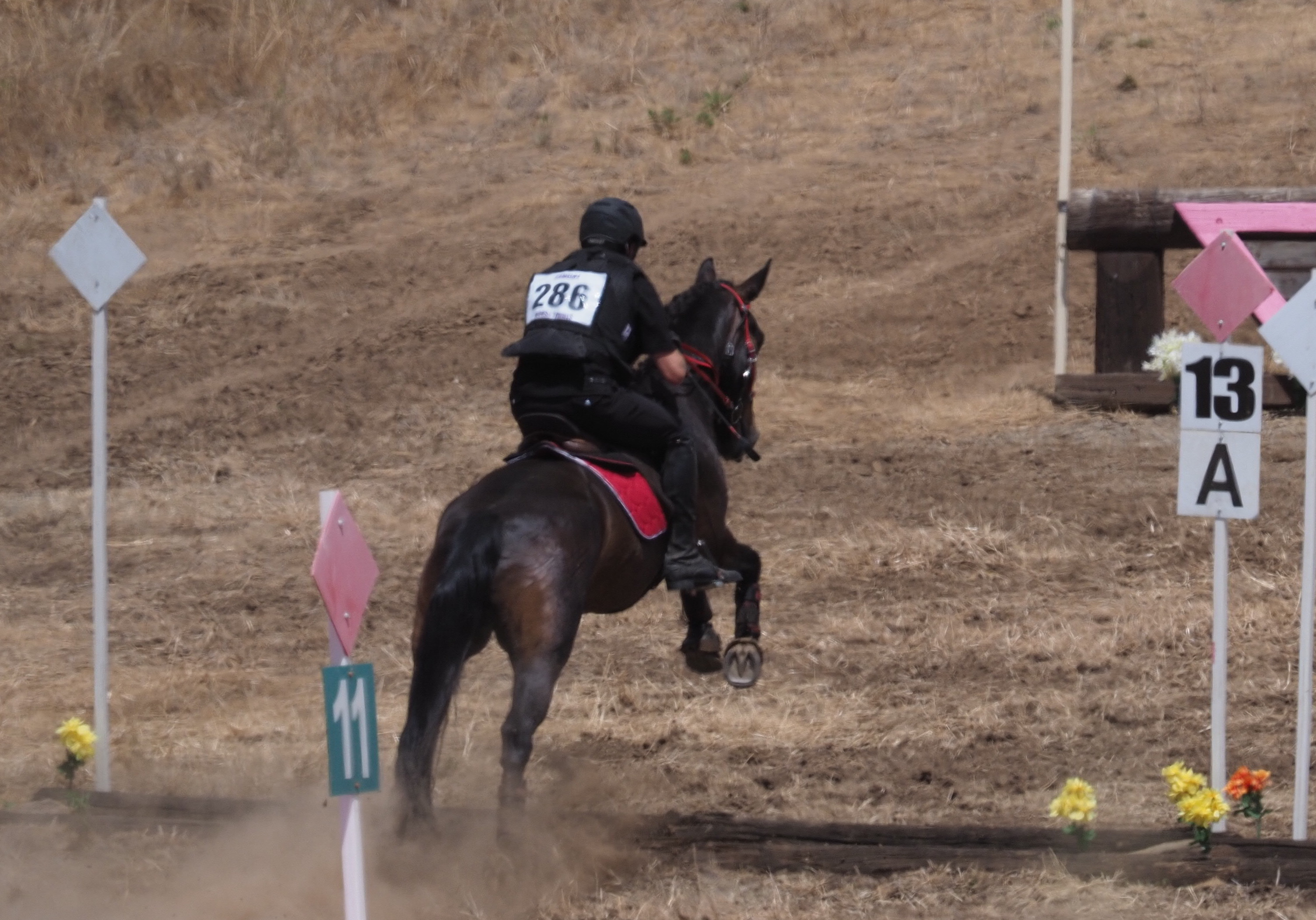 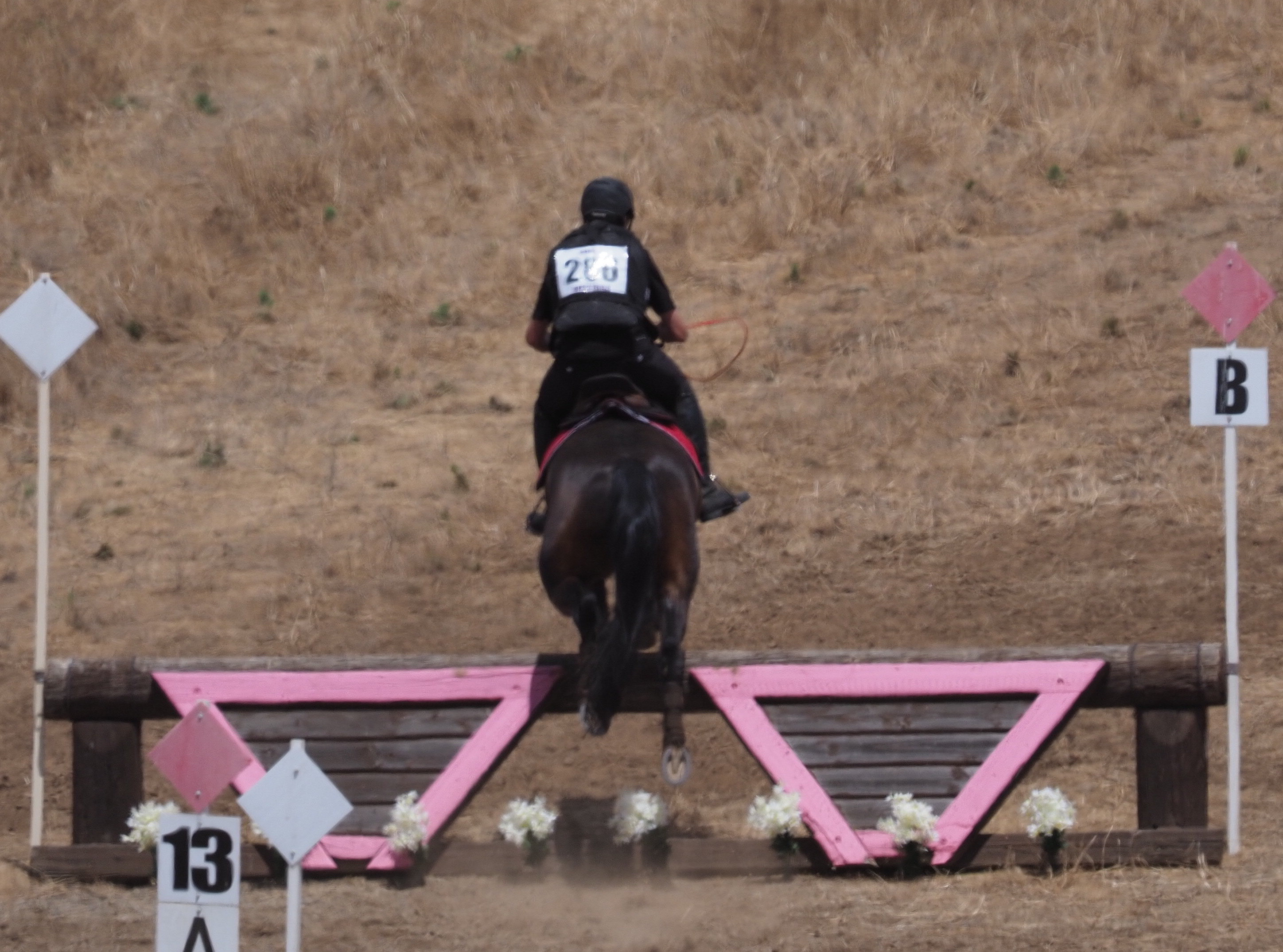 The last two jumps were pretty straight forward. They were also far away so my picture is very zoomed in. The turkey feeder jumped nicely, but my husband had been concerned about the bench. I didn’t really understand why given what that horse will jump for him, but he either knows his horse well or his own concern created a problem because Eugene tapped it going over. But they were clear and across the finish line. 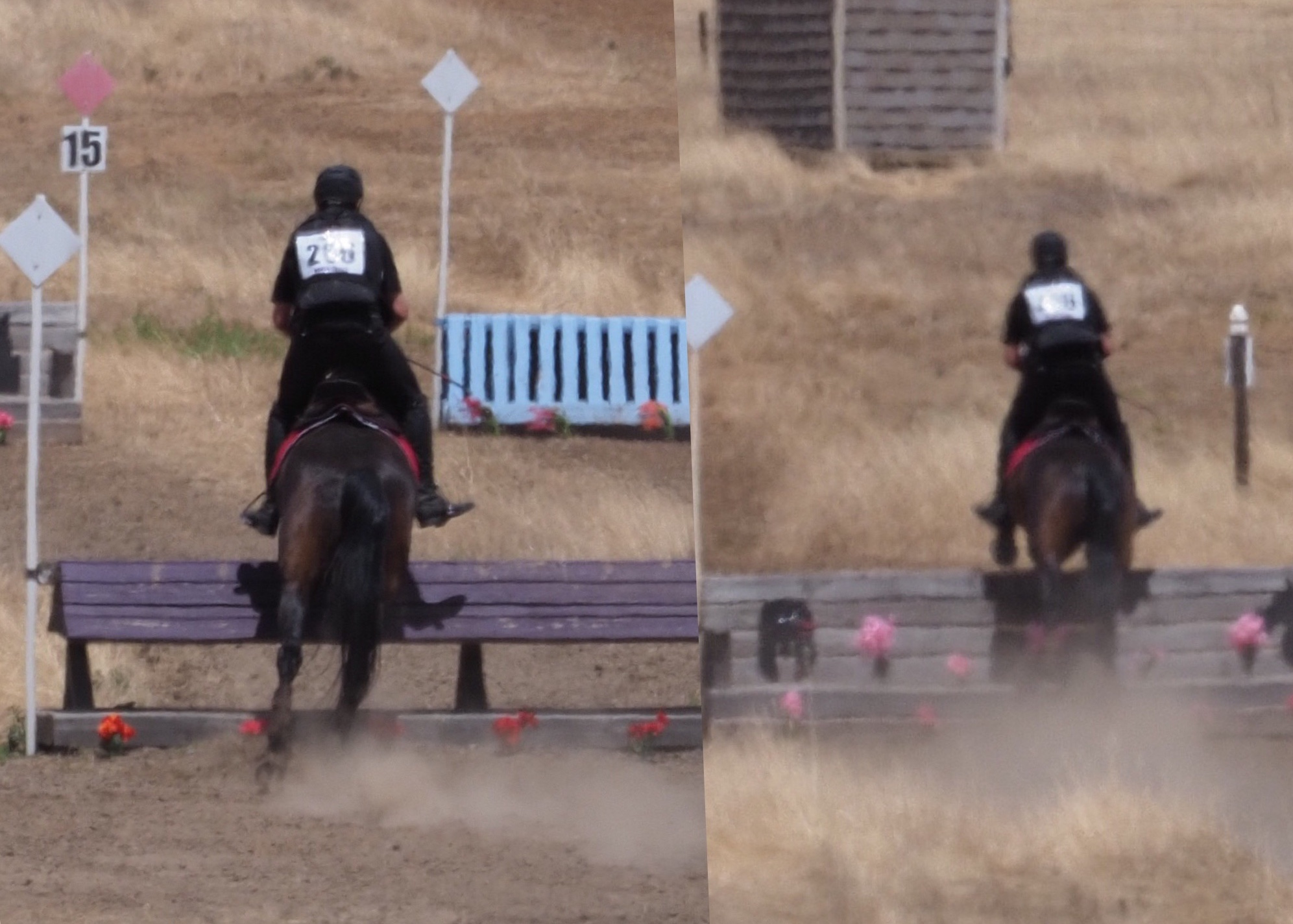 My husband was pretty upset about that stop. It’s really a shame that Eugene’s previously perfect cross country record now has a stop on it that wasn’t the Eugene’s fault. But that’s eventing. I think Novice is good for them though since they will both need to get better to do well at this level.

11 thoughts on “Camelot’s Over The Moon in June H.T. – Eugene’s Cross Country”