It’s actually freezing cold here in California. Of course, our version of “freezing cold” is technically some water froze overnight, but it’s still pretty nice out during the day. It’s nothing like the rest of the country is feeling.

On Sunday we took the Mustangs over to Rancho San Antonio for a trail ride. But first, we had to kick a family of squatters out of our trailer. 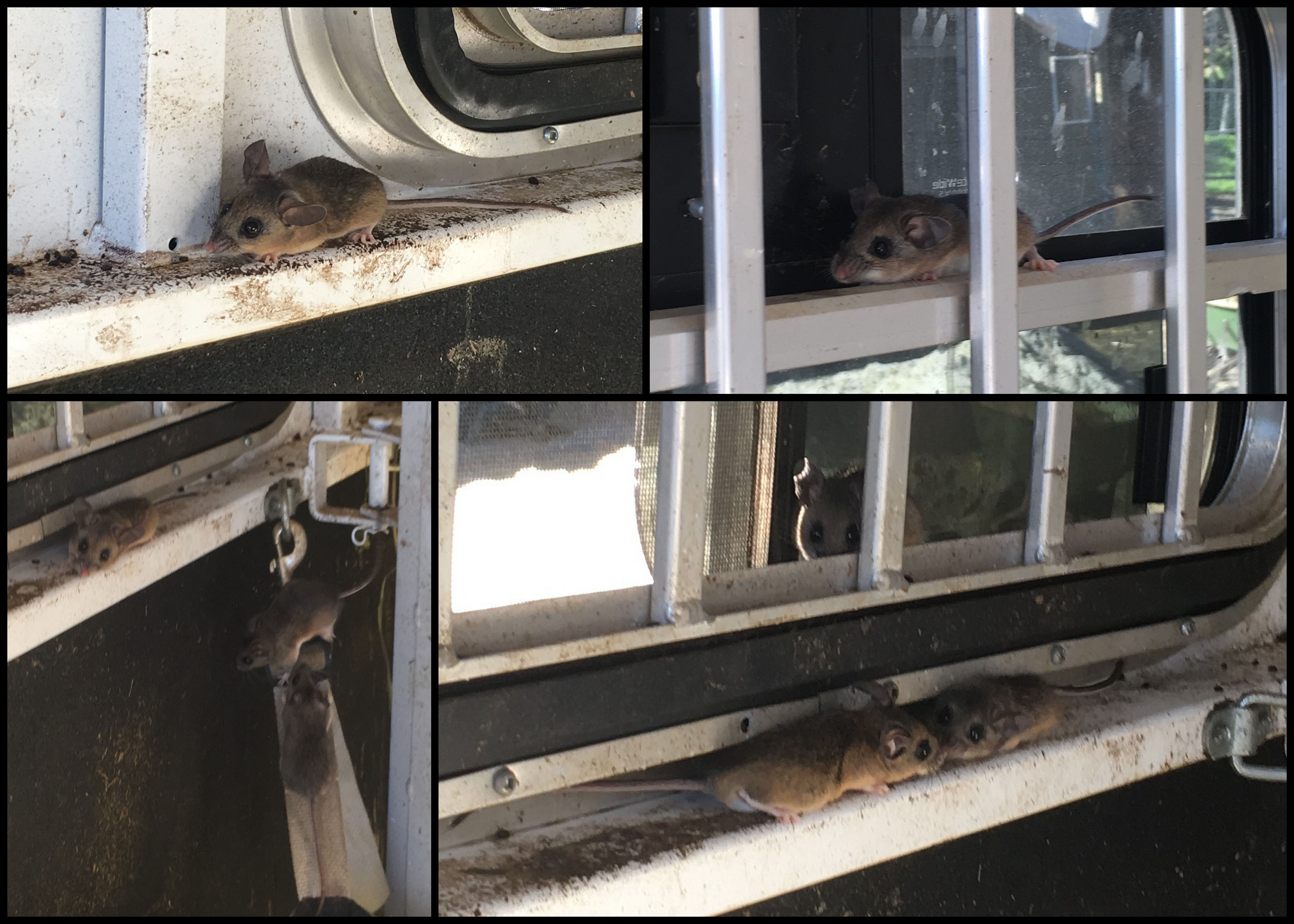 Imagine our surprise when we went to add hay for the horses and we found a family of California Mice sleeping in the middle stall’s hay manger. They were probably just as surprised to see us, but not really as scared as they should have been. They sort of scurried up on the ledge and window and just hung out. We had to get use a strap to fling them out of the trailer. We probably could have just picked them up, they were so docile. I think they’re actually really cute. They’re very different from the field mice that I normally find in barns. They have huge ears and eyes and they stare at you pleadingly. My comment at the time was, “they’re really cute, but they can’t live in here.”

We chased most of them out, though 1 or 2 managed to climb through a hole into the wall of the trailer. I can only hope they don’t chew on the electric in there. Or die in there. When we returned to the barn hours later, the barn cats were fascinated by that corner of the trailer, which makes me think the mice are still in that wall. 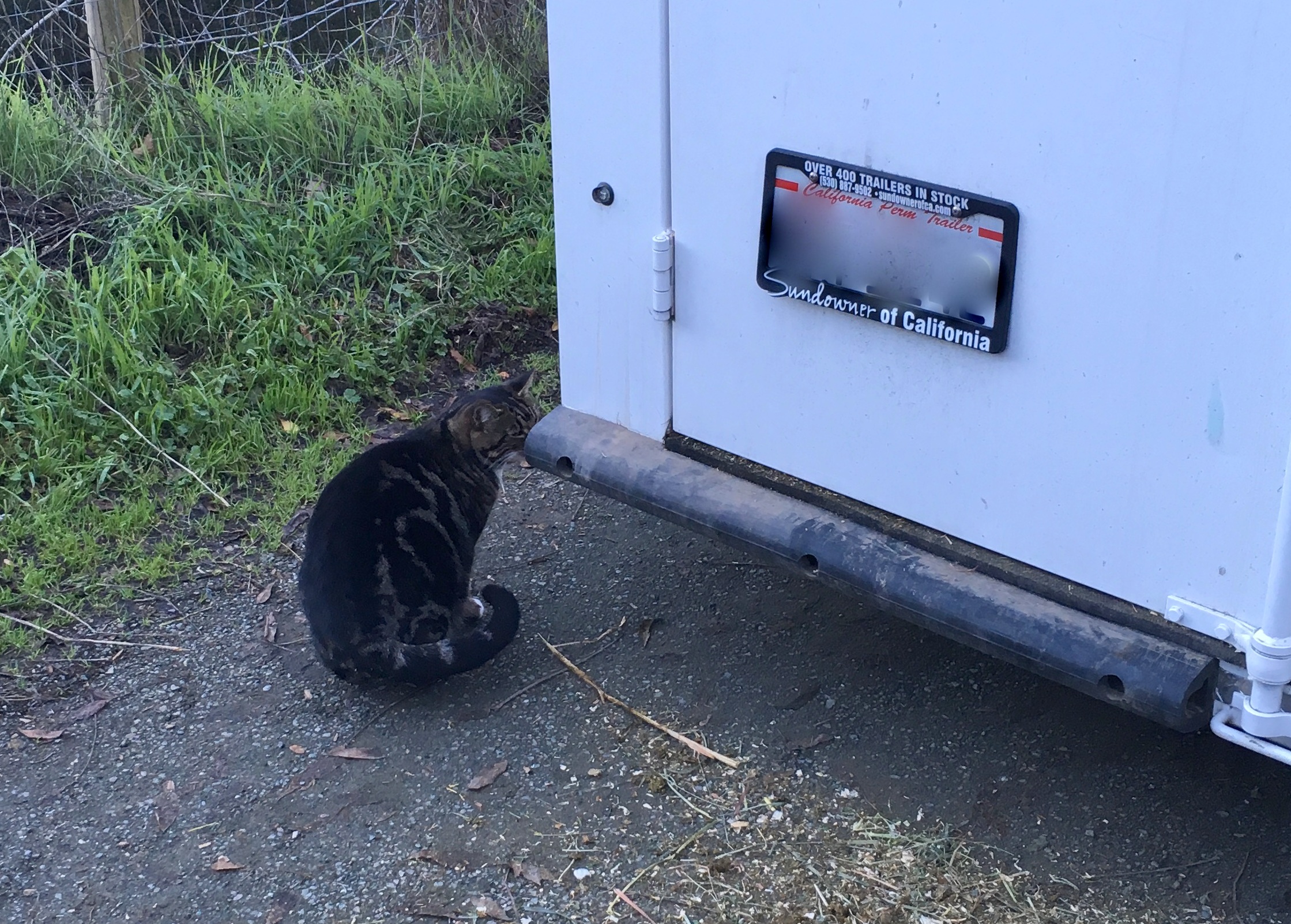 Anyway, once we got the mice either out of the trailer or they had disappeared, we loaded the ponies up and headed out. The park was packed, which is the usual for this park. Thankfully, Eugene was happy to lead across the scary bridges and Levi was happy to lead past scary people (Eugene considers all hikers to be potential threats). The weather was really perfect for a ride. Cold enough to keep the horses from getting too hot or sweaty, but not so cold that we were miserable. We even found frost in the shady sections. It’s as close to snow as we get here. 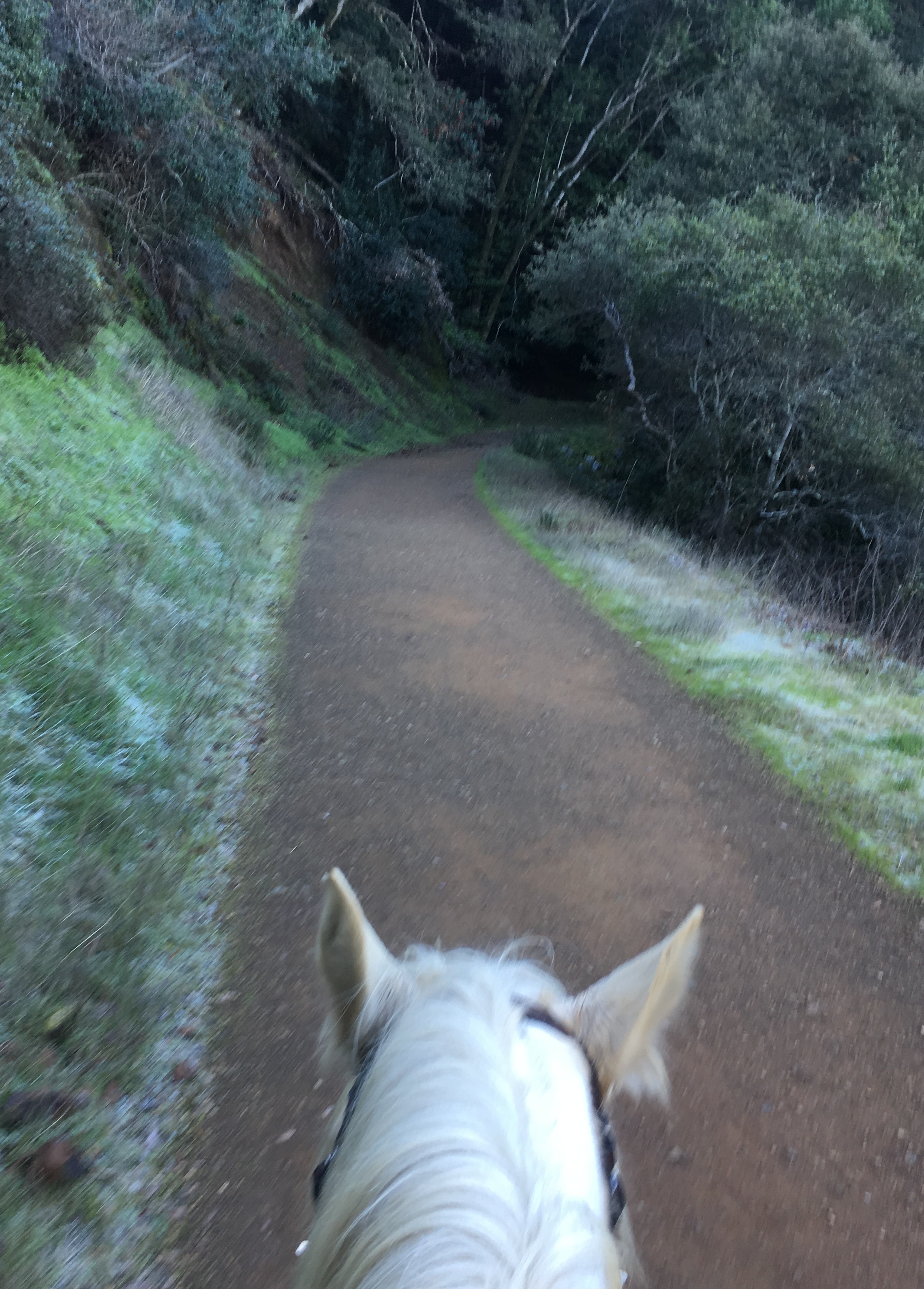 The air was amazingly clear and we could actually see all the way down the bay to San Francisco. Heck, we could see the mountains beyond SF. My iPhone couldn’t really do justice to the view, but SF is there. 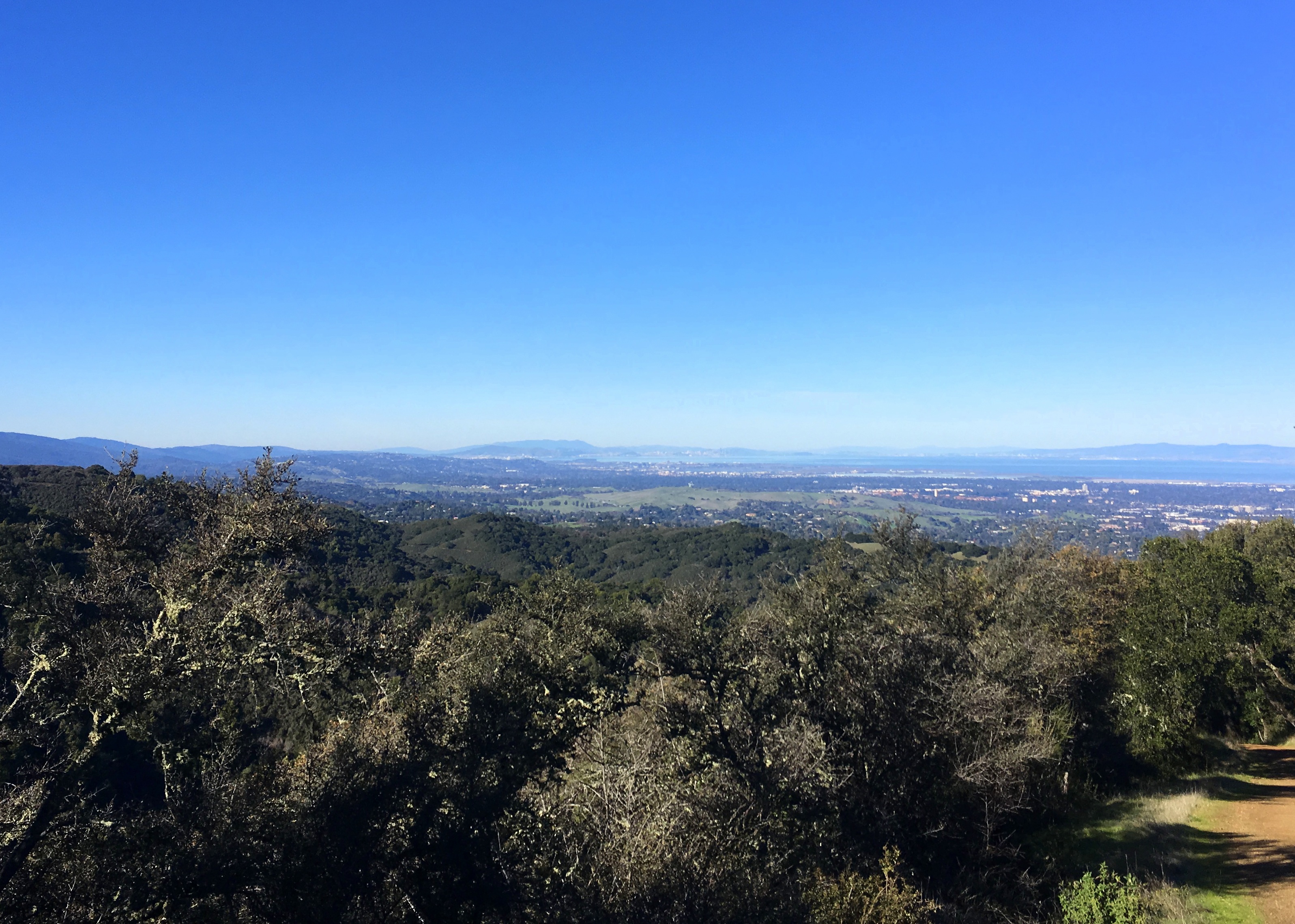 We rode up to the top of the park. It’s a pretty steep trail and Levi isn’t in very good shape so it was a long, slow climb, but a really enjoyable trail. We stopped for breathing breaks and to take in the views along the way. 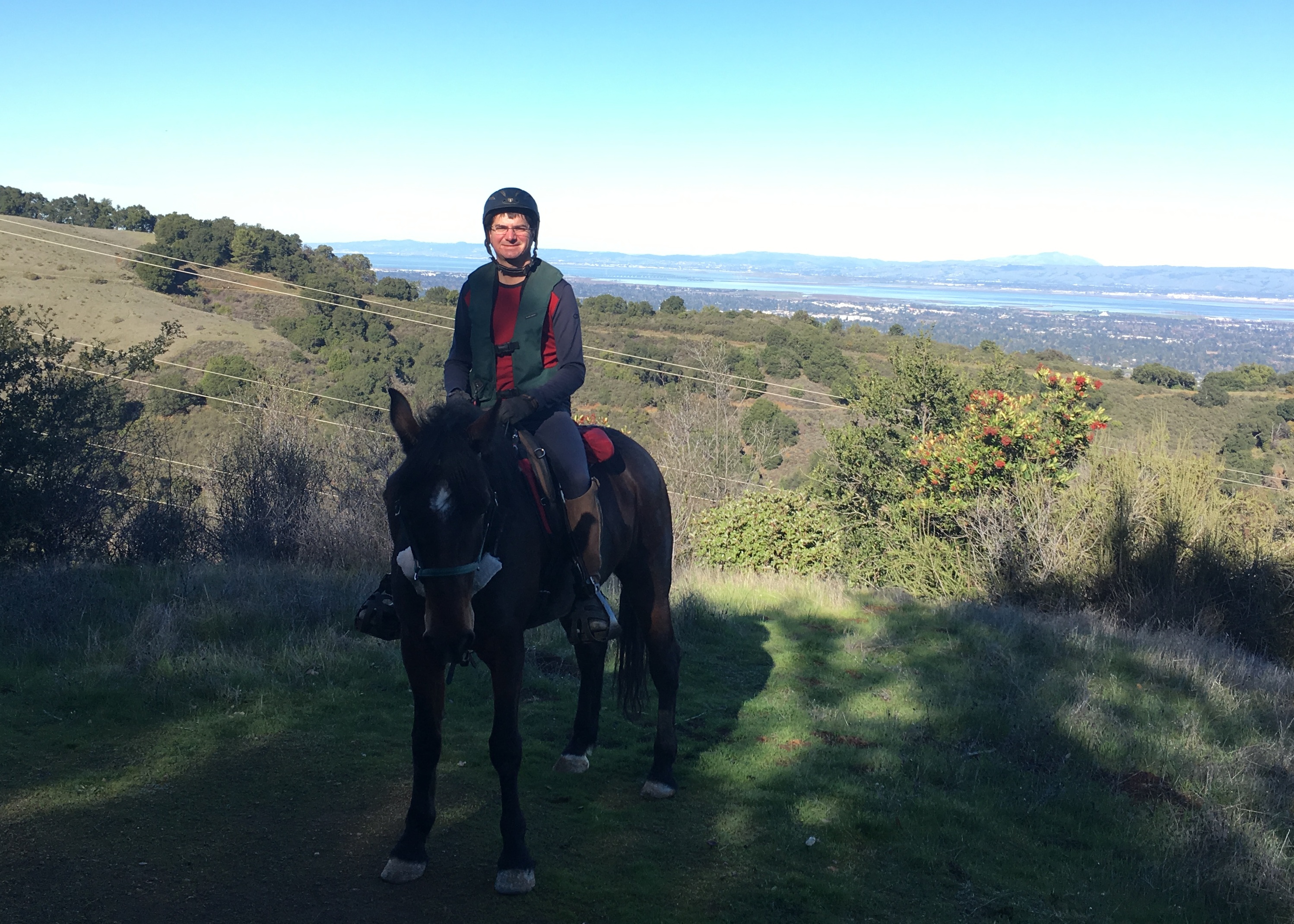 After the top, there is a short section that is very steep and I usually get off to walk down it. Eugene just powers on down so got out of Levi’s sight around a turn and Levi lost his mind. While he’s a very good horse for his stage of training, he’s still very green and very herd-bound (he has spent his entire life living in a herd with his fellow Mustangs). So we had a discussion about listening to me and respecting my space. It’s all just baby green horse stuff to be worked on.

We stopped at the lower vista on the way down, but Levi was uninterested in posing for a picture. I love this outtake; he looks like a stereotypical naughty pony. He wasn’t being that bad, he just kept moving his head around. 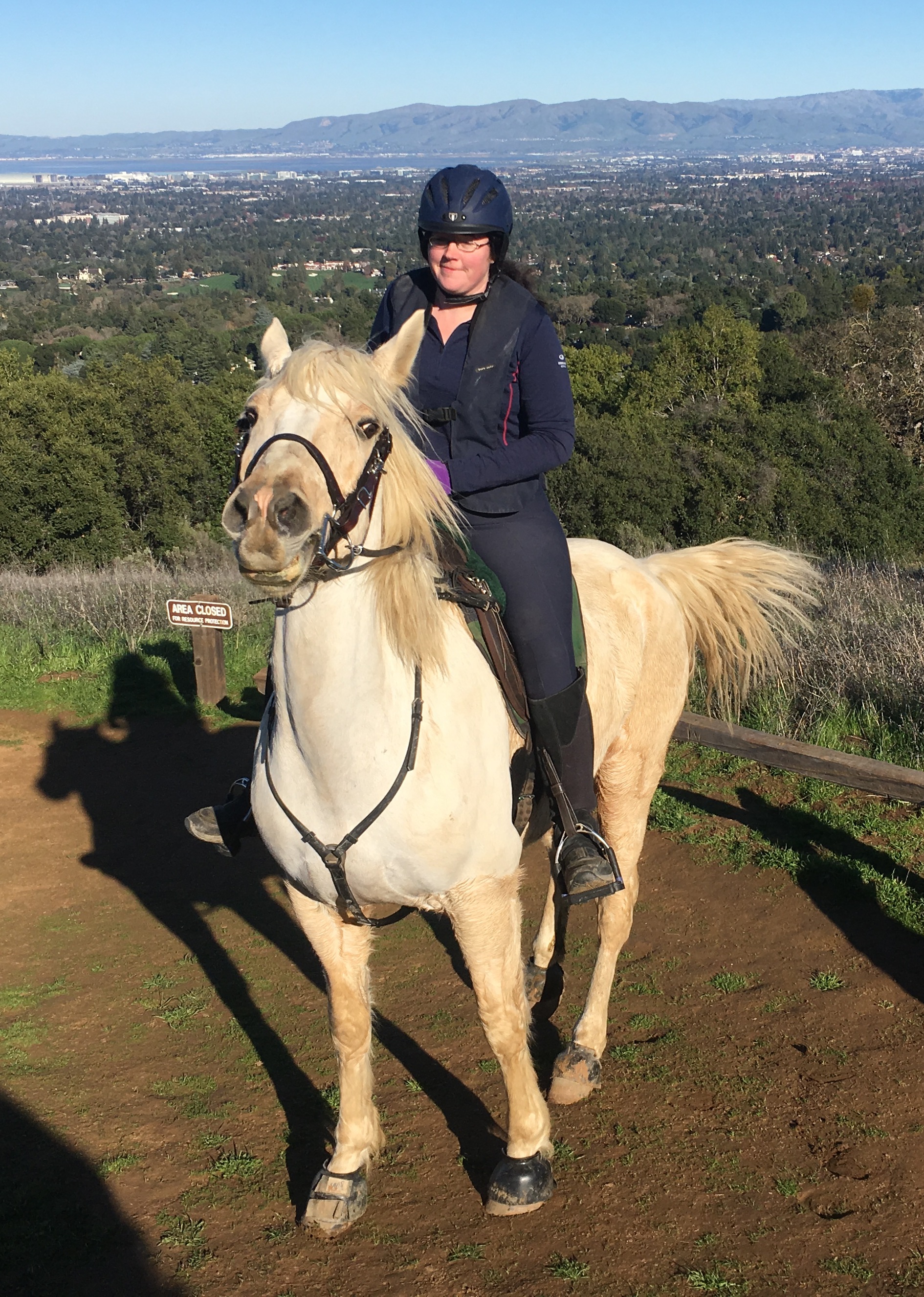 We continued on towards the trailer and passed a herd of deer. I have been trying out the all ears app on everything and I am here to report that it works on deer too. 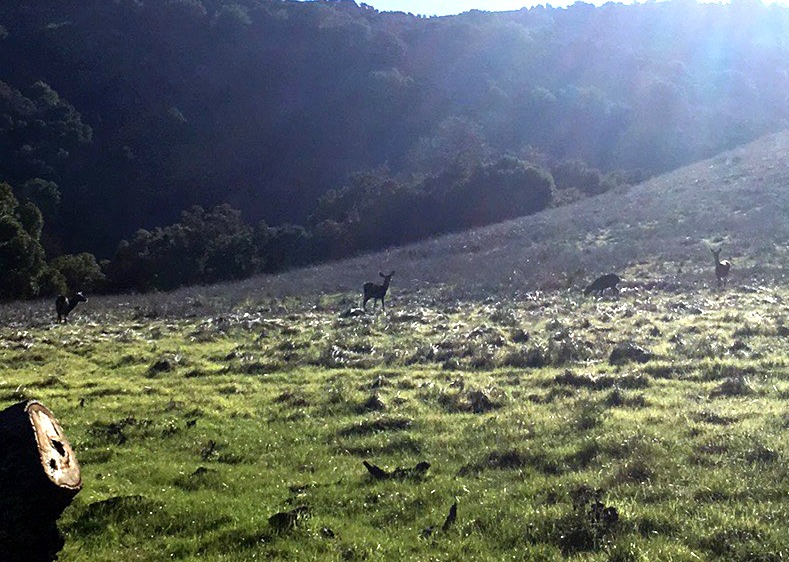 Back at the trailer, we quickly untacked and headed back to the barn. The temperature was dropping quickly as the sun sunk behind the hills and my husband and I were adding all the layers we could find. The ponies got coolers and then blankets were tucked in for the night. It was a great day for a ride, though I’ll be happy to have this cold snap go away. 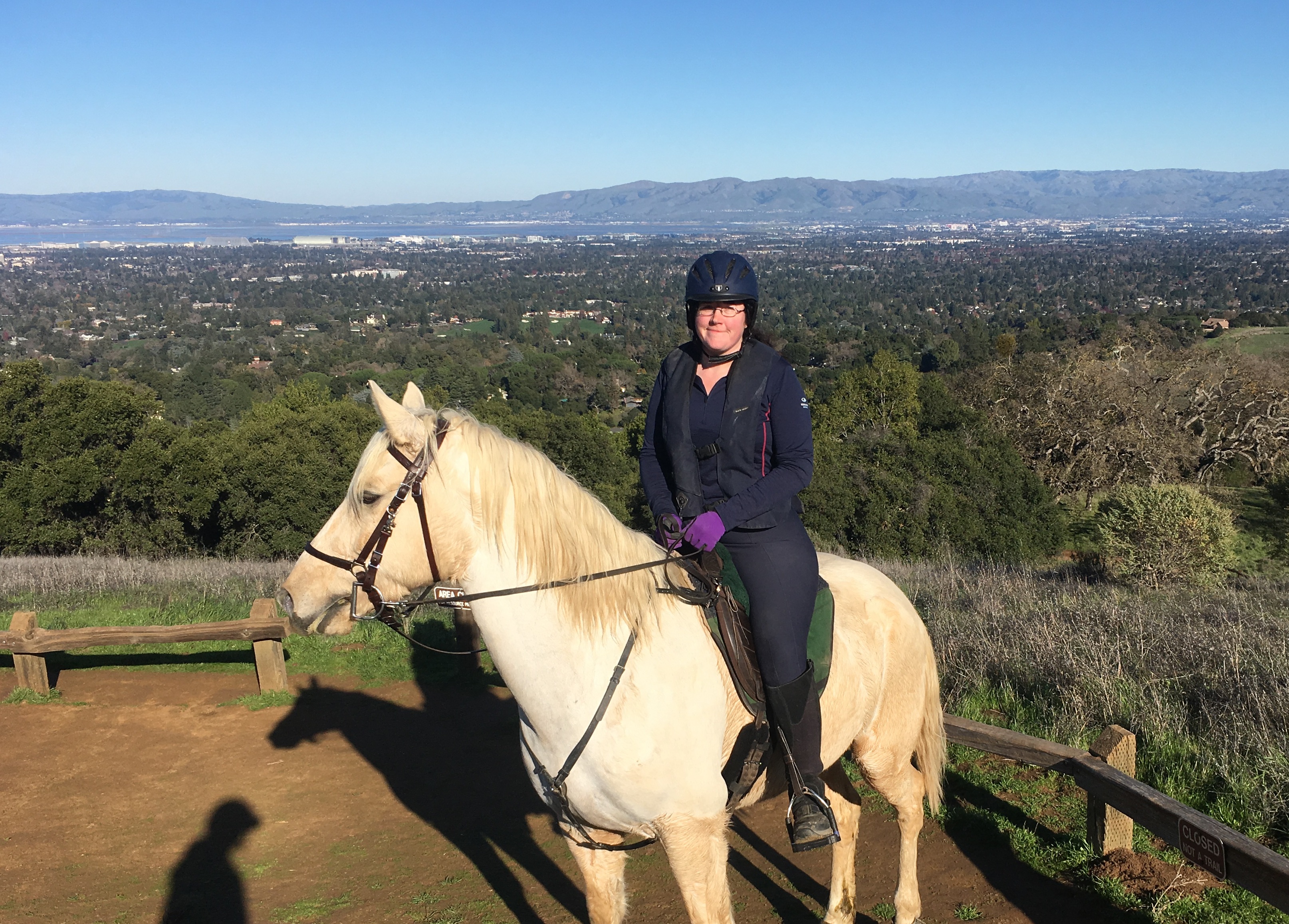 23 thoughts on “Cold Ride at Rancho”