I rode Friday, Saturday, and Sunday in week two of Nilla’s rehab. We’ll start trotting next Friday if she still looks sound. Friday was a quick ride in the small arena. On Saturday my husband rode Dijon and we rode for a bit in the upper arena before going down the path to the water tower. It was nice to get out of the arena for a little bit.

On Sunday we rode up to the upper arena and found this: 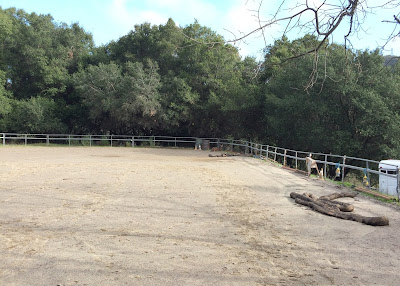 Can you see it? How about now? 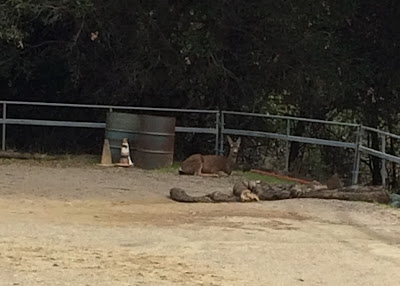 My husband actually didn’t see her until I pointed her out. I took the first few pictures from the other end of the arena because I was sure she’d run off as soon as we walked near her, but she didn’t. 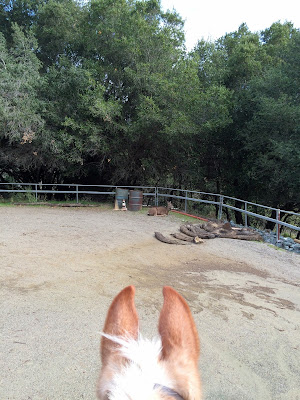 We hadn’t been going all the way up into that part of the arena anyway to avoid erosion. You can see the tracks we made from the day before in the shot below. This was apparently a safe distance, so the doe just lay there the whole time we rode. 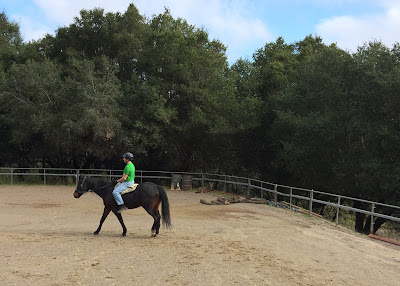 She would swivel her head around to follow us as we walked by, but didn’t bother to get up until the end. 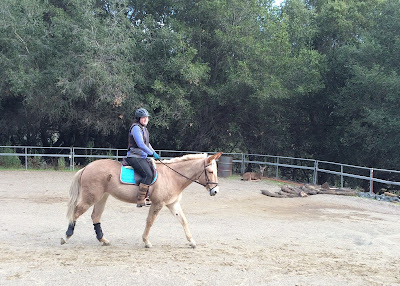 When I’d finished my 30 minutes, I went over to see how close I could get. Turns out, it was not much closer than where we’d been riding. 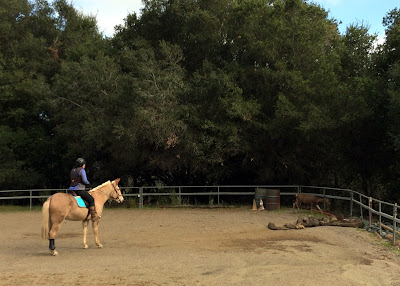 I didn’t push it once she stood up, so she just went to the other side of the fence and stood there watching us and grooming herself as we left the arena. The path back to the barn follows the arena, so we rode beneath her going around the turn and she continued to just stand there and watch us. When I was approaching her, I could hear some more deer in the underbrush to the left of the doe, but couldn’t see them. After we round the turn and were riding below the arena, we flushed them out and they went running up the hill into the arena. Both Nilla and Shasta stiffened a bit, but they didn’t really spook. I was impressed with both of them for standing up to those scary deer. And I was really impressed with the doe for not running away from us.