Eugene had a ride from the Seasonal Trainer (ST) while we were at Rolex. She said she really liked him, but thought he didn’t like his bit. I don’t think he’s going to like any bit until we get his teeth done. He’s 7 and never seen a dentist and he has huge, sharp wolf teeth that I want to have removed. Thankfully, the dentist is scheduled for later this month. We did change his bit to a happy mouth though and he seems to like it better.

After the trainer rode on Wednesday, he had 4 days off, but was still a good boy on Monday. I brought Nilla into the ring while my husband was riding and he was fascinated. 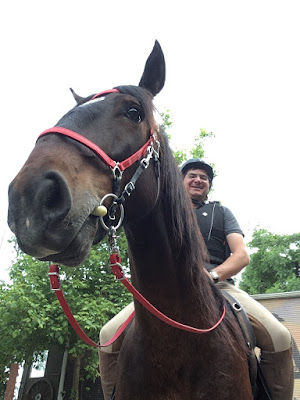 Once I was on, we walked around a bit until he got used to another horse doing things and then we walked up to the upper arena. Nilla and I did a bit of w/t/c and some trot poles while Eugene  learned to concentrate on his own work even when another mule was doing things. 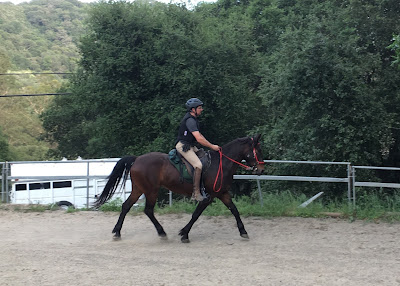 He even did some poles for the first time though he was very unsure about the whole trotting through them thing: 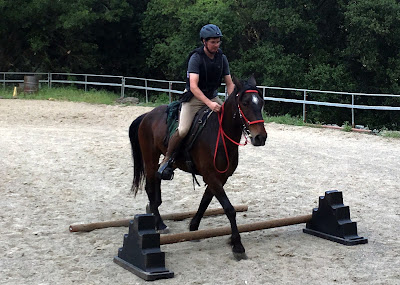 My husband had some issues with canter as he got very excited and want to not come back. I wouldn’t call it bolting, but it was not very well-behaved cantering. Unfortunately, my husband’s default reaction to anything out of the norm is to lean forward and got into a half two-point sort of position. Which is the opposite of how you want to deal with going to fast. We had a discussion and they cantered again with much better results: 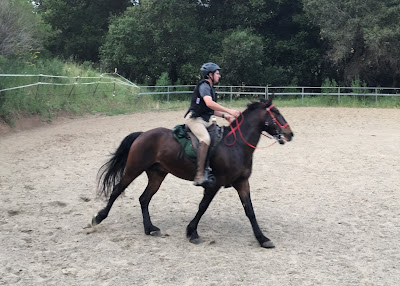 He’s still pretty unbalanced at canter, and it’s going to be a lot of work to develop it. We started him on some side-reins work the next day to help him learn to balance. They were super loose, but we wanted him to just experience them before we tightened them up. 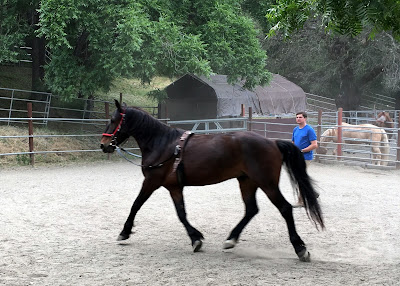 We also started him on his trail riding by walking down to the water tower. Since he’s gaited, he walks really fast and he was pissed to be stuck behind Nilla who was just moseying along. The trainer he had been at said he liked to be in the front for trails. We let him lead going back and he does like to lead, but then he gets more spooky. And he’s very spooky. 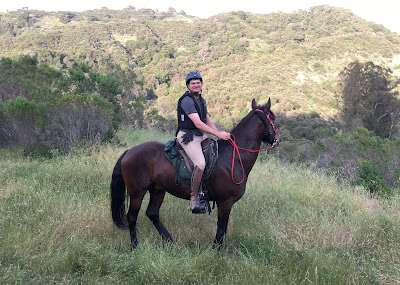 So far he’s been a good boy. We’re hoping to get him out on some real trails this weekend. He’s actually in better shape than Nilla and Nilla really needs to be in better shape to do an endurance ride this summer. Hopefully he can mentally handle getting out so that they can both get some conditioning rides in this month. 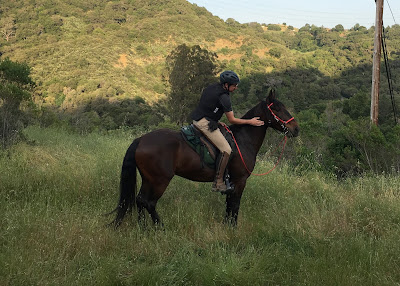 My husband had a lesson with ST the other night and I think it was really helpful for him. He really doesn’t like to listen to anything I say and ST basically says the same things as me. This way he gets the advice he needs from a neutral party. She’s also going to do a ride a week on him. 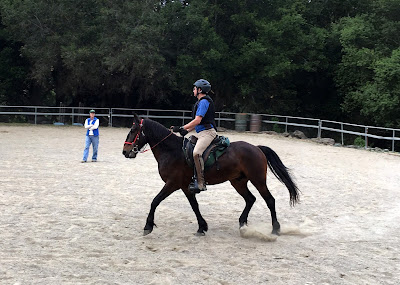 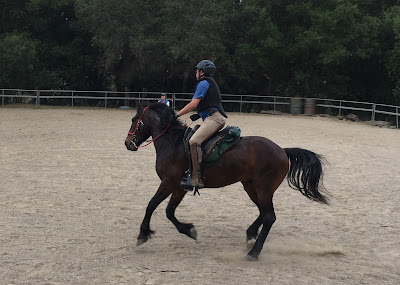 I rode Nilla up to keep him company during the lesson, but as the lesson was ending all of the barn horses started winnying for unknown reason, which caused him to call back. It’s the first time we’ve ever heard him call, even when other horses were. As a Mustang, it makes sense for him to be pretty herd bound, but we’d really like him to bond to Nilla since he’ll be traveling a lot with her. 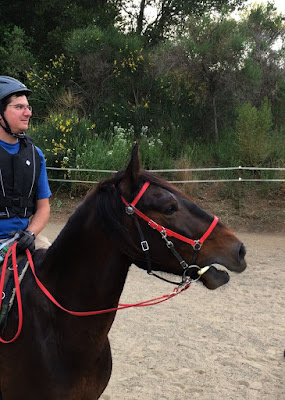 Overall though, lots of progress and we’re very happy with him so far.
Don’t forget to check out Viva Carlos’ contest for a chance to win a Riding Warehouse Gift Card.