On Sunday we set up grids. As a bunch of our poles have disappeared, we had to utilize some broken pole pieces to even make a grid. We’re going to have to get some more poles and I think we’re going to construct some more interesting jumps. I’d like to make a picket and lattice to start and if I can figure out how to make them without them being too heavy, I’d like a roll-top and a coop or a hedge box.

We started with trot poles into a cross-rail to a vertical.

The second Nilla figured out we were jumping, she was on fire. It was actually difficult getting her to trot through the trot poles. You can even see in the gif above that she starts to canter the step between the trot poles and the cross-rail because she is so excited. There was also much “celebrating” after the jumps.

I had told my husband to wear riding pants and he could jump the mule as well. When he did his first line, we had added another vertical and Nilla came off of it throwing her head down and around. My husband commented that she seemed really unbalanced over that jump and I laughed. She’s not unbalanced, she’s playing. She’s been doing this since I’ve owned her. It used to be a much bigger problem as it was really yanking my back out, but now I just ignore it. He commented on how she doesn’t do it after all the jumps, just the last one. That’s because she has something to concentrate on after the other jumps, but after the last one, she knows she’s done. We were using the 101 Jumping Exercises book and the book actually specifically says to do a circle after the grid line because horses may want to “play” afterward. 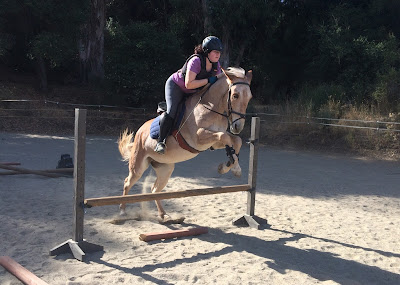 Of course, Nilla is much more animated with my husband riding her. It took him quite a few laps to even get her listening to him. And she was over-jumping everything with him. 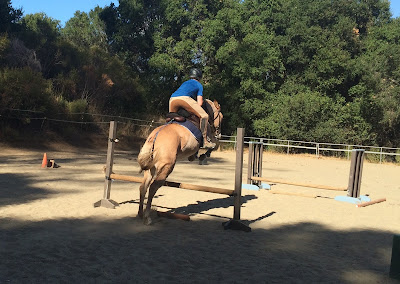 Of course, she was over-jumping things with me too: 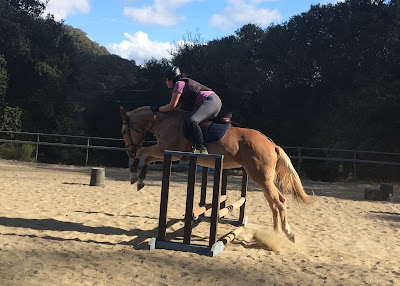 This was her first time seeing a square oxer and she really didn’t care. Of course, it’s pretty tiny so it’s not worth much concern.

And lest you think any of this is happening without tongue, you’d be wrong. 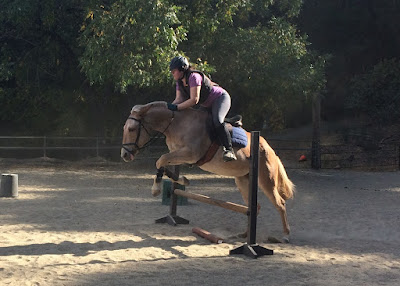 What’s that you say? You want to see her tongue bouncing through the air? Well, I’ve got that too:

I was really impressed with her jumping. The grids were exactly what she needed to get some jumping experience without having to worry about striding, circling, steering, or really anything other than jumping. She was really excited about jumping and was pulling me to every jump and really just eager to get over them. Such a good mule. 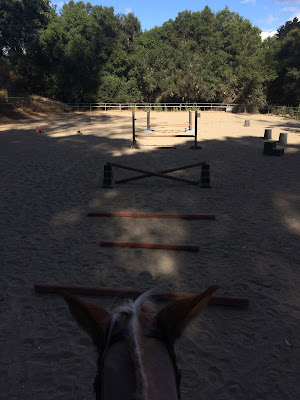 This is every pole we have and you can see how we even had to use a broken pole to make the trot poles. All the ground lines are broken poles too.