Part 1 of this weekend camping trip is here.

On Sunday, we slept late which was so nice. I did wake up really early to go to the bathroom and found the sun just coming up with the valleys filled with lakes of clouds.

When we finally got up, we fed the ponies their morning hay and then made breakfast for ourselves. We made chocolate chip pancakes which were yummy even though we forgot syrup and butter. We offered Nilla and Shasta some pancakes (bits without chocolate chips). Nilla wouldn’t even look up from her hay. Shasta was very interested until she sniffed it and then rejected it. 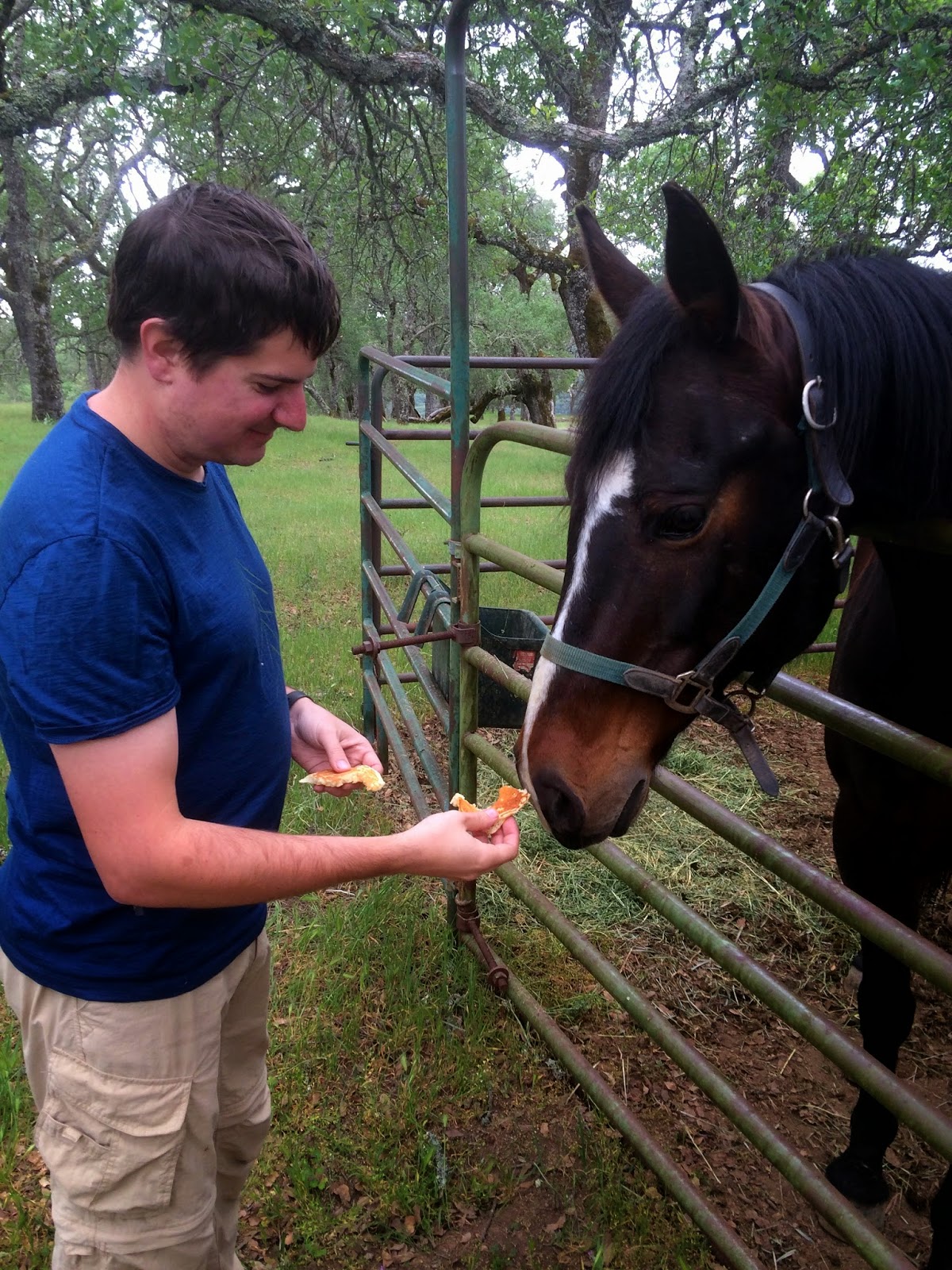 After packing up and reattaching the truck and trailer, we pulled them out of their pens to clean the pens and tied them to the nearby trees. Shasta untied herself and proceeded to run around the camp freaking out. I don’t know what her issue was, but it started when we started up the truck and moved it so I think she’s getting anxious about trailering, which would also explain why she’s recently started kicking Nilla. The weird thing is, she’s loading nicely and quietly, which she didn’t do in the beginning. Eventually my husband caught her and re-tied her and we finished cleaning up.

We were planning on doing another ride before leaving, but at this point, it started drizzling. We check the weather and there was no rain called for. However, the last time we were in this area, we got rained on even though there was no call for precipitation. Since the road out was dirt, we did not want to be doing it in the rain. I don’t know if it ever really started pouring, but we were using the windshield wipers and the paved road was wet, so I think it was the right choice to leave.

When we got back towards our barn, the sun had come back out and the skies were blue so we pulled into Stevens Creek?Fremont Older Park to ride. We can technically ride to this park without a trailer. We used to do this pretty frequently, but the route involves some road riding. We used to cut through an undeveloped lot to avoid being on the road for a bit, but they started building a house there a year ago so we haven’t been back in a while. It’s a really great park for riding with nice, wide trails. It’s also connected to a large boarding and trail riding stable so there are often horses in the park and the trails are maintained for horses.

We rode about 2.3 miles out to Hunter’s Point, a view point where you can see all the way to San Francisco on a good day. You can also see the bay, NASA, Google, Apple, and other Silicon Valley landmarks. 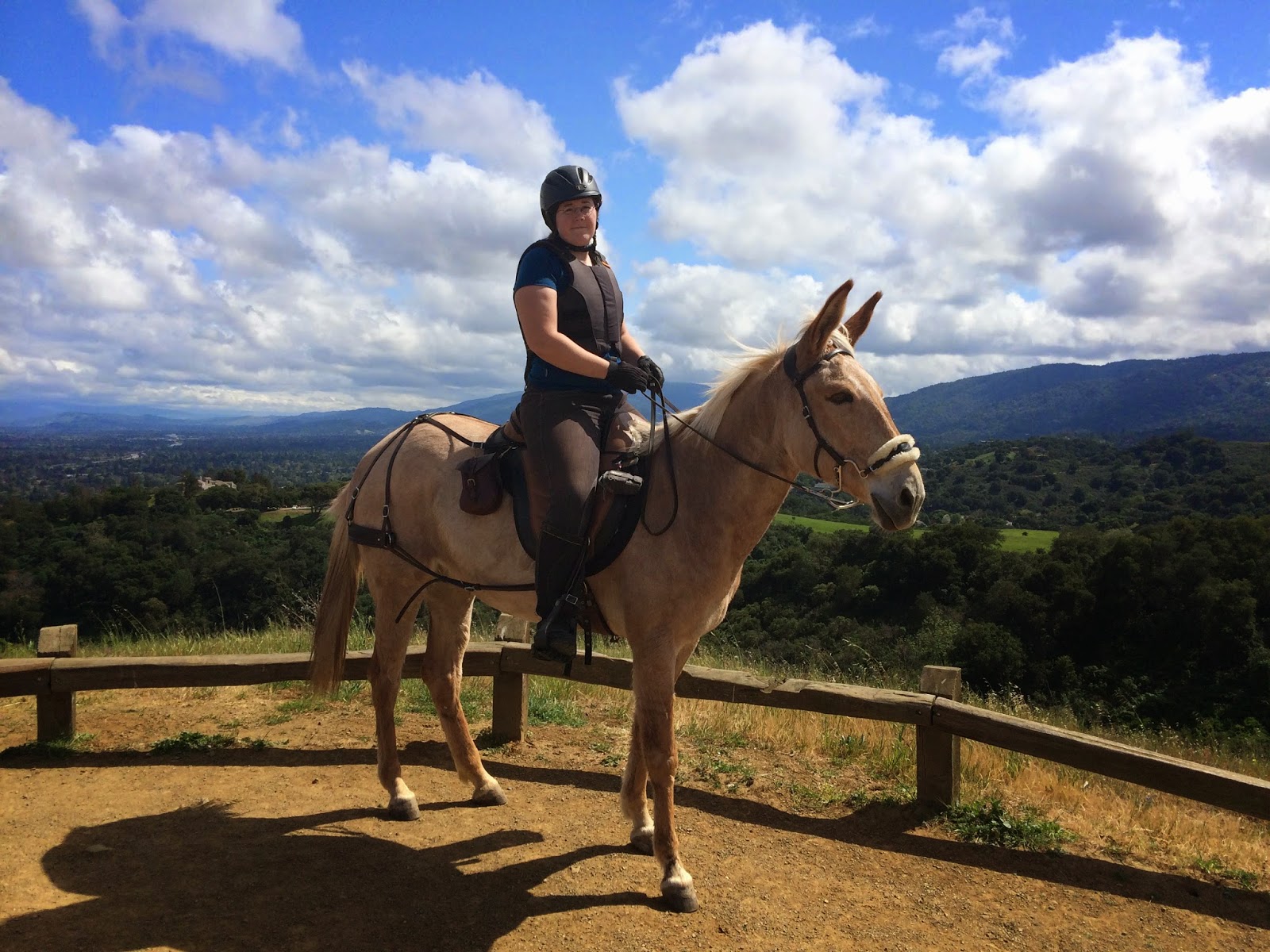 On the way back we did a bit of running and trying to get Nilla to canter. I got about 7 strides total spread out over 3 different attempts. She really prefers not to canter.

We also stopped to let our starving beasts eat some of the luscious green grass. Since it’ll be gone soon, we have to treat them when we can. 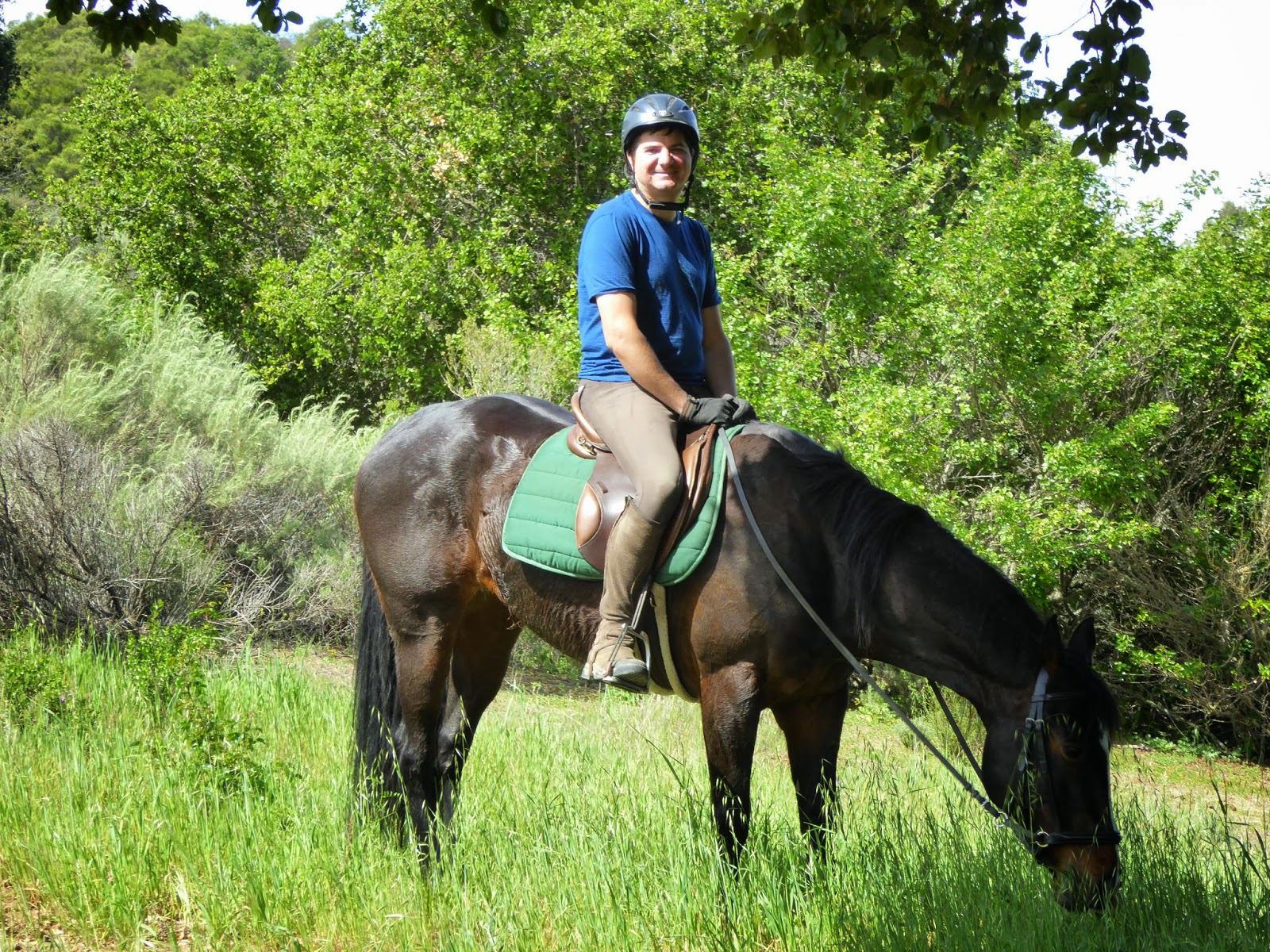 We rode back (making the trip about 4.6 miles). Right as we neared the entrance we ran into a family that was just so excited to see horses. The mom was exclaiming over out beautiful horses. We told them Nilla was a mule and she asked if she liked her ears rubbed. Nilla does so I told them to go ahead and I wish I had gotten a picture of 4 random strangers rubbing her ears. A lot of mules are not friendly with strangers, but this one likes pretty much everyone. I once even had a mentally challenged man who had asked to pet her start hugging her head and she just stood nicely. I was waiting for her to try to rub her bridle on him, but it was like she knew and was minding her manners.

We also stopped at the visitor’s center where the ranger was so excited to see horses. The Fremont Older Section of the park gets tons of horses, but the part we came in from rarely does. The parking lot is usually 3/4 empty so there’s room for a trailer, but they don’t technically have “trailer parking” so I don’t think people know they can go here. I only know from driving there and checking it and calling the park to make sure I wouldn’t get ticketed for parking across multiple spots. They even have a water trough for horses and hitching posts, so I don’t know why they don’t dedicate a few spots to trailers.